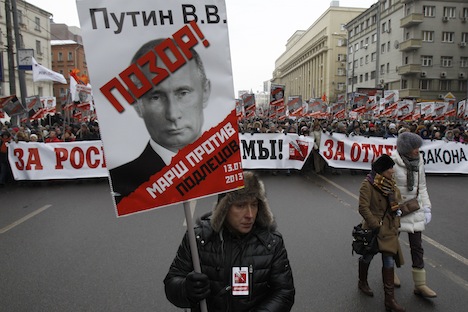 Russians turned up for a march in Moscow on Sunday to protest against a ban on adopting Russian children by Americans. The placard featuring a portrait of Russian President Putin says, "Shame on Putin! March against scoundrels". Source: Reuters

In a city center march, protesters express deeply felt anger at the treatment of Russian orphans and accuse Duma deputies of hypocrisy.

Tens of thousands of Muscovites took to the city’s boulevards Sunday on a freezing cold January afternoon for a march to protest the new law banning adoptions of Russian children by American families.

The law was initiated in retaliation for the Magnitsky Act, signed by U.S. President Barack Obama to impose visa and financial restrictions on Russian officials allegedly implicated in the death in pretrial detention of lawyer Sergei Magnitsky in 2009.

Estimates of the turnout varied from 9,000, by Moscow police, to 50,000, by leftist opposition leader Sergei Udaltsov.

Although the march was aimed against the adoption ban, many participants appeared to be making a more general protest against President Vladimir Putin’s government, in a similar vein to the election protests last year.

“This government is illegitimate, we were cheated in the elections,” said Nikolai, an engineer, as he signed a petition for dissolving the State Duma and abrogating the adoption ban. “Everything is corrupt from top to bottom. I want them to hear that people want change. I don’t care who’s on top, but there should be the rule of law.”

Opposition leaders took part in the march, but no speeches were made at the end of it.

Gennady Gudkov, an outspoken opposition lawmaker with the Just Russia party who was stripped of his Duma mandate over claims of a conflict of business interests last fall, told a throng of reporters during the march: “[The authorities] have nothing to respond with [to the Magnitsky Act]. One couldn’t have come up with a more idiotic response than the orphan law.”

He added, in comments carried by pro-opposition newspaper Novaya Gazeta, “Those in the elite understand that tomorrow those who are stealing will be put on the Magnitsky list.”

Parliament is likely to be obliged to consider protesters’ petitions in a follow-up to a proposal put forward by then-Prime Minister Putin last February.

“I suggest that parliament considers public initiatives backed by 100,000 signatures collected online,” Putin wrote in a campaign article ahead of March’s presidential vote. The pertinent legislation is being drafted now.

In December, Novaya Gazeta handed in a petition signed by more than 100,000 people to the Duma, the lower house of parliament, to call for a halt to the adoption ban. Deputy Duma Speaker Sergei Zheleznyak then said the petition would be considered in January.

Shortly after that Novaya Gazeta collected 100,000 signatures for another petition, this time calling for the Duma to be dissolved and new elections held.

On Sunday, around 600 people marched holding large photos of Duma deputies, and even of Putin, with inscriptions saying “Shame!” on them.

The protesters’ demands seem unlikely to be heeded by the authorities, however.

“Those concerned about orphans’ fate are absolutely right,” Dmitry Peskov, Putin’s spokesman, said in an interview with liberal online TV channel Dozhd on Sunday. “But at the same time they can’t but see and hear the clear intention of the country’s leadership, in particular President Putin, to take a set of measures to improve the situation with providing orphans with everything necessary.”

“I don’t think such appeals deserve any attention,” Peskov said of the calls to dissolve the Duma. “The Duma is our parliament, it was elected by popular vote and treating it with such disgrace… There’s nothing to talk about with people like that.”

Duma deputies came in for particularly heavily criticism from many marchers, however, who mainly appeared to be ordinary, well-mannered working-class and middle-class Muscovites.

“This Duma has worked for a year now but hasn’t passed a single law for people – they’re only raising fines and utilities prices. They’ve sent their children [to study] abroad, their children are alright. How can they now shelter behind the destitute, defenseless orphans?” a pensioner, Larisa Alexeyevna, said.

“That they’ll allocate some funds [to support orphans]… when will that be? When these children die? Just in November they signed an agreement with Americans saying they’ll allow adoptions. And suddenly [they revoked it]… What’s changed since then?” she added.

A child psychologist , Svetlana, marched with a placard with a quote from the Bible on it, which read: ‘…to turn aside the needy from judgment, and to take away the right from the poor of my people, that widows may be their prey, and that they may rob the fatherless!’

“I’ve seen children in orphanages who no one will adopt here,” Svetlana said. “Missionaries from America came to our orphanages and prisons in the 90s to take care of orphans and inmates. Christians familiar with the Law of the Lord will always be against this law.”

Some of the participants of the march had heart-rending stories about adoptions to tell.

Irina Semyonovna, a pensioner, told of her neighbors, who adopted a boy but returned him to the orphanage after giving birth to their own children.

“[The adoptive mother] treated him so badly, he slept on the floor and was so much underfed that we had to give him food,” Irina Semyonova said. “He still wanted to stay. ‘Have you ever been to an orphanage? Do you know what it feels like there?’ he’d tell me.”