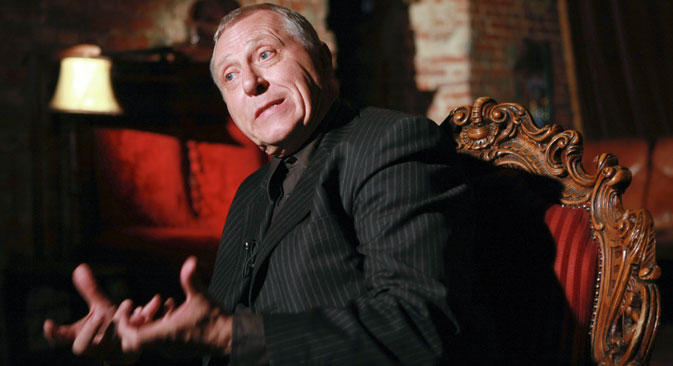 Peter Greenaway: 'The Russian avant-garde engineered a spiritual revolution and another one in artistic language' Source: RIA Novosti

British director Peter Greenaway and his wife, Dutch director Sasskia Boddeke, will set up a multimedia-installation for the event featuring over 400 Russian avant-garde masterpieces.

Among the preeminent cultural events of 2014 will be the exhibition entitled “Golden Age of the Russian Avant-Garde”, which, with support from the British Council, will be held in spring at Moscow Manege as part of the UK-Russia Year of Culture.

Greenaway and Boddeke traveled to Moscow in November for casting: they evaluated actors to play the main avant-garde artists, poets and filmmakers – Kandinsky, Malevich, Rodchenko, Meyerhold, Filonov, Eisenstein, Mayakovsky and even Lilya Brik. Lenta.ru spoke with Greenaway and his Moscow-based project curator, director of the Museum of screen culture “Manezh/MediaArtLab” Olga Shishko.

According to Ms Shishko, the project will technically consist of a black box with dimming. Three towers stand inside the box, with all of their sides being screens: “The project will be very geometrical; Greenaway is a sort of mathematician. He has a very structured logic”. The screens will broadcast a 15-minute presentation, for which scenes with the actors will be fused with images from the avant-garde works, photo and film reels, and fragments of avant-garde films.

“We will have 12 screens”, says Greenaway. “And we can create a dramatization of actual events; all these characters, such as Mayakovsky, will continuously change – and speak, speak, speak. And we will write dialogues – veritable, accurate and completely fabricated. The characters will converse, yell, argue and interact. Perhaps several of them never met each other in reality."

"I live in Amsterdam, and in 1642 Rembrandt lived on one of its streets. Descartes, being a French man, spent a lot of time in Amsterdam and lived on some other street, and Spinoza lived on a third. And this trio of greats likely did not know each other – but it’s easy to imagine a dialogue between them. We know that Eisenstein worked with Mayakovsky and Prokofiev, and I’m sure they conversed almost daily. But take some other people: did Dovzhenko ever speak with Marc Chagall? I doubt it, and if so, it cannot be proven. But you can imagine what they would say to each other,” he says.

The director will not seek portrait similarity from the actors, according to Shishko: “They will argue with each other, and their images will increase, exiting one screen and crossing to another; this will be a palpable film, one of movement, rapture and emotions; an endless game of images. At some point the characters will be shown not in clothing, but the actual works and texts."

"Among all 12, not one has the right of lead voice; together they form a musical composition and cacophony wherefrom a new culture is born. Overall, Peter has long been not the director but conductor of all his works,” Shishko adds.

“The digital revolution allows us to transform websites into songs, songs into film, film into books and books into TV shows”, Greenaway says. “This plasticity was predicted by the Russian avant-garde, and I, to be sure, will draw this parallel”.

The Russian avant-garde engineered a spiritual revolution and another one in artistic language, although its aim to reconstruct the bedrocks of existence ultimately failed – and the movement itself was crushed by the communists. “This is an enormous tragedy”, Greenaway says.

“As we understand, all revolutions inevitably fail. The main events of the Russian avant-garde lasted 15 years – this is very little, and we know what happened in the end. It was replaced by a dogmatic, conservative, egocentric phenomenon, which came and liquidated the entire avant-garde. The avant-garde tragedy and its positive program will be part of the project, which I do not intend to conceal. The Russian avant-garde is popular today”, says Greenaway.

“Every day there’s an exhibition somewhere in Europe. I live in Amsterdam – there’s currently an exhibition of Malevich at the Stedelijk; three weeks ago I was in Pisa, where there was an exhibit of Malevich’s drawings; I was recently in Seattle, where there was an exposition of avant-garde architecture. I doubt that London residents know who Mayakovsky is. I think Kandinsky leads the pack: more people know him than the others. But this is another reason why we are doing this! The task of such exhibitions includes education: there was also this person, and this one, and another one, and this woman, and he said to her, and she said to him, and so on, and so forth,” he adds.

“We introduced Greenaway and Boddeke to the experts”, says Shishko.

“I expected an explanation of Russia’s avant-garde, and we would recommend something, but far from it. They absorbed all the information, but the selection of characters was entirely with them. So whenever I beseech them to include Khlebnikov, they say: “Khlebnikov will be there, but not as a character played by actors, but as a kind of poetic space”. Or the opposite: Greenaway cannot, for example, abandon Filonov, although this is somewhat strange, because this is not quite avant-garde. But this is a glimpse of the Russian avant-garde from the standpoint of a Western person, a maestro, not an arts scholar.

At every meeting Greenaway and Boddeke reiterate: “Don’t expect chronology from us; this is exclusively an author’s insight”.