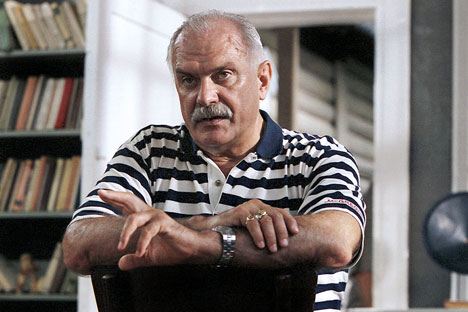 TASS
Nikita Mikhalkov is the world’s most famous living Russian director. He has been nominated for the Oscar three times for Best Foreign Film and in 1995 received the award for the film “Burnt by the Sun,” a drama set in the Stalinist era that is often compared to Victor Fleming's 1939 classic “Gone with the Wind.” RBTH looks back at the films considered to be Mikhalkov’s best.

One of the first successful films by Mikhalkov is a drama about silent film stars who, together with the film crew, run away from Moscow, which has just been captured by the Bolsheviks, to shoot a film on the Black Sea, hoping that the nightmare will soon end. The film perfectly depicts the illusions harbored by the intelligentsia, who awake to face the bitter reality. With great irony Mikhalkov recreates the absurdity of the "creative process," ardently improvising the shooting scenes with crazed salon melodrama.

It was in Slave of Love that Mikhalkov developed his familiar trademark: the nostalgia for the lost values of the Russian intelligentsia and the precise detail of life receding into the past. The actress protagonist falls in love with the cameraman, who turns out to be an underground Bolshevik.

The film was shot in the middle of the 1970s and, in accordance with the ideas of the time, in the end the protagonist is finally convinced of the purity and nobleness of the Bolshevik ideology. When the White Guard shoots her beloved right in front of her, she screams: "You are animals, Sirs!"

The film drew a lot of enthusiasm from Soviet viewers, won a Director's Prize in Tehran, was highly praised by critics in New York and Los Angeles and awarded the highest prize by the National Board of Review in the U.S., where Elena Solovei, the film's leading lady, has lived since 1991, teaching acting.

One of the best screen adaptations of Chekhov's works, the film is based on the play Platonov and motifs from some stories. Mikhalkov conveys with warm humor, slight grotesqueness and nostalgia Chekhov's thoughts on the meaningless and fruitlessness of the intelligentsia's altruistic impulses, on the chasm between the "simple folk" and those indulge in idle talk about their difficult life.

Piano scene in An Unfinished Piece for a Player Piano. Source: YouTube

The film's protagonist, who was once obsessed with ideas of serving people, is painfully going through the collapse of his youthful romantic dreams and his own uselessness and even contemplates suicide. Mikhalkov's trademark melody pervades the picture: the poetry of life on the Russian estate drifting into the distant past.

Dark Eyes is Mikhalkov's most famous film outside of Russia. In it the director once again turned to Chekhov, to his famous short story Lady with a Lapdog, about an accidental meeting between a successful employee of a Moscow bank and a provincial married woman at a seaside resort, about an unexpected love that turns into a tragic dual between passion and family obligation.

Mikhalkov shot this picture with an Italian crew and was obviously counting on an international audience. The legendary Marcello Mastroianni was invited for the leading role and the plot was set in Italy, where an Italian bon vivant has a fatal encounter with a Russian lady.

Having perfectly understood who would be watching the film, Mikhalkov used plenty of popular legends about the enigmatic Russian character, generously scattering the film with Russian exotica and gypsy songs.

This is the most successful film out of the trilogy about Division Commander Kotov (played by Mikhalkov), a faithful communist who was one of Stalin's favorites, but right before the war, as with many of the dictator's pets, was arrested.

This is a film about the moral dilemmas that everyone in the Stalinist era faced, about the perfidy of tyrants, about the dangerous double meaning of every situation and every innocent phrase. It is about how even the best people in Russia in one moment wound up in the camps and how those who parted with their families might never see them again.

The film was the greatest expression of Mikhalkov's talent. It received the Grand Prix in Cannes and an Oscar for Best Foreign Film, while British playwright Peter Flannery even based a play on the film, which premiered in London in 2009.