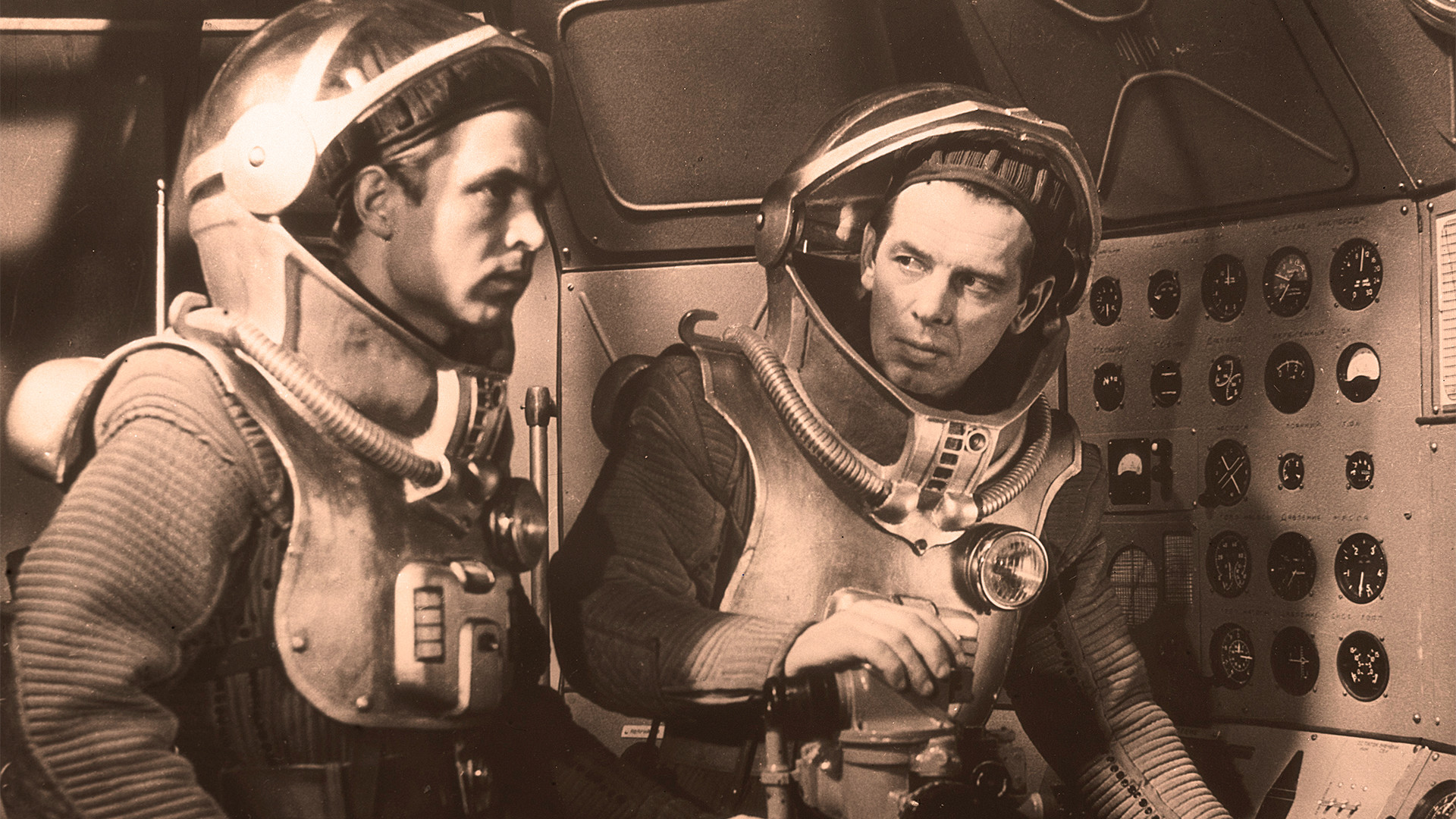 Zhzhenov Georgy/Russian Look
The Soviet Union long had a fascination with all things science fiction. In the 1920s, works of art like Yevgeny Zamyatin’s novel, 'We,' and the first sci-fi movie ever, 'Aelita: Queen of Mars,' stunned audiences around the world with their novel visions of the future.

During the Space Race, Soviet scientists achieved many world firsts by launching satellites, cosmonauts and space stations into the heavens. Of the many great Russian sci-fi movies that were inspired by that, here are seven that you absolutely must watch. 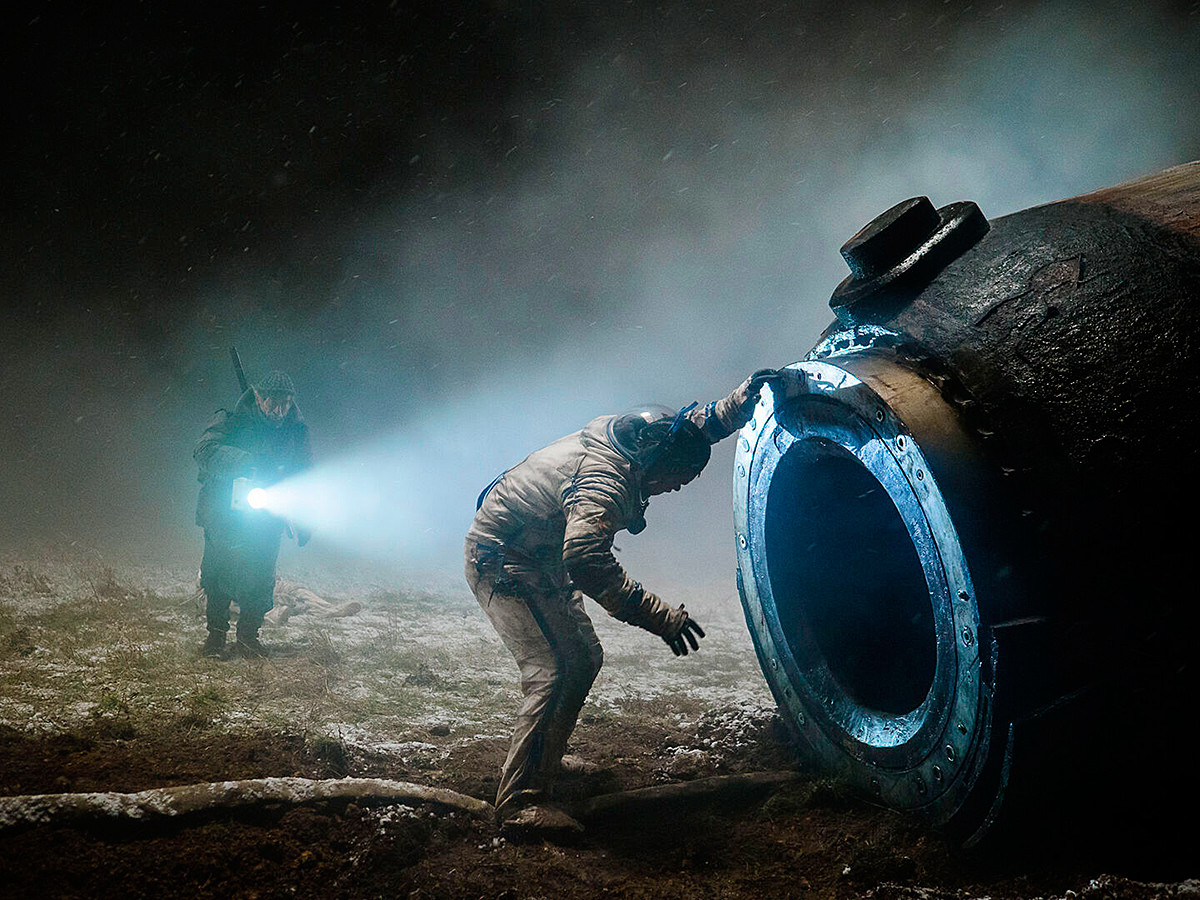 This thrilling sci-fi horror movie is a recent release and is attracting rave reviews internationally. Set in 1983, the movie begins with the tragic and unexplained crash landing of two cosmonauts back on earth. One of them returns dead; the other has lost all memory of the violent descent.

To figure out what happened, a government research center keeps Konstantin Veshnyakov, the surviving cosmonaut, under observation. However, unable to cope with his spiraling mental state, they bring in outside neurologist Tatyana Klimova to assist.

Soon enough, the audience comes to realize that a terrifying alien is growing inside Konstantin. However, despite this monstrous creature crawling out of its human host, the real horror in Sputnik revolves around Tatyana’s growing awareness of the psychological drama within Konstantin, as well as the Red Army colonel in charge of the facility.

You can find the movie available on Amazon Prime Video.

Still not sure if you want to watch Sputnik? Here are five more reasons! 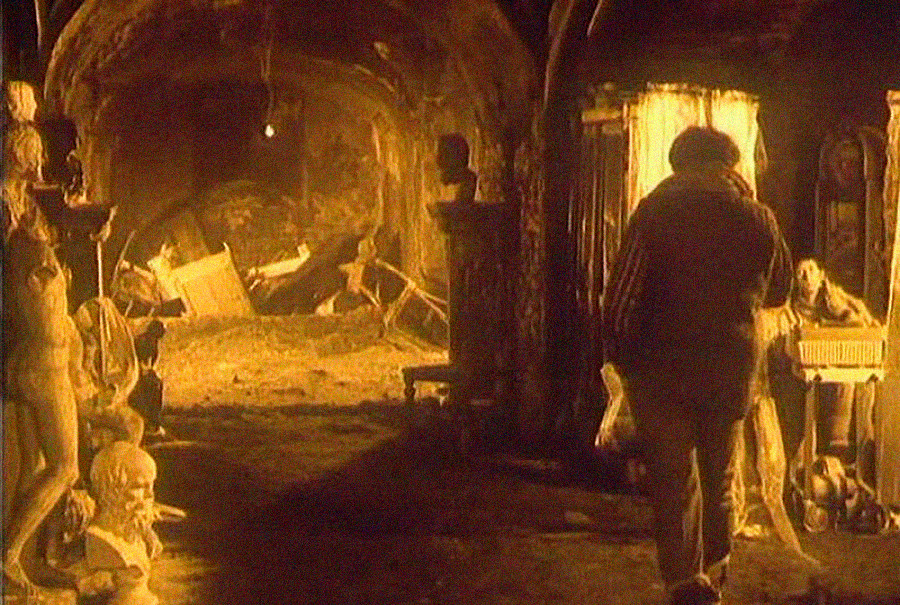 Dead Man’s Letters is an emotionally intense contemplation of the aftermath of a nuclear Armageddon. The movie’s protagonist is a respected scientist dubbed the ‘Professor’, who comes to terms with the end of the world and the deaths of his wife and son. Hiding inside the basement of a museum, he is surrounded by a tragic mix of dying and defeated characters. Many, like his wife, are clearly breathing their last, due to radiation poisoning. Among them is a group of sick children. However, when the time comes for the healthy ones left to evacuate to a central bunker facility, the Professor chooses to stay with the children. His care for them ultimately trumps his own need for survival.

This beautiful, melancholic movie is the first movie by director Konstantin Lopushansky. If the plot reminds you of the most well-known Soviet, post-apocalyptic movie – Andrei Tarkovsky’ Stalker – you’d be right to think so. Lopushansky in fact worked as a production assistant for Stalker and was a great admirer of Tarkovsky. So, if you love Tarkovsky, you’ll definitely enjoy Dead Man’s Letters.You can watch it here on Russian Film Hub. 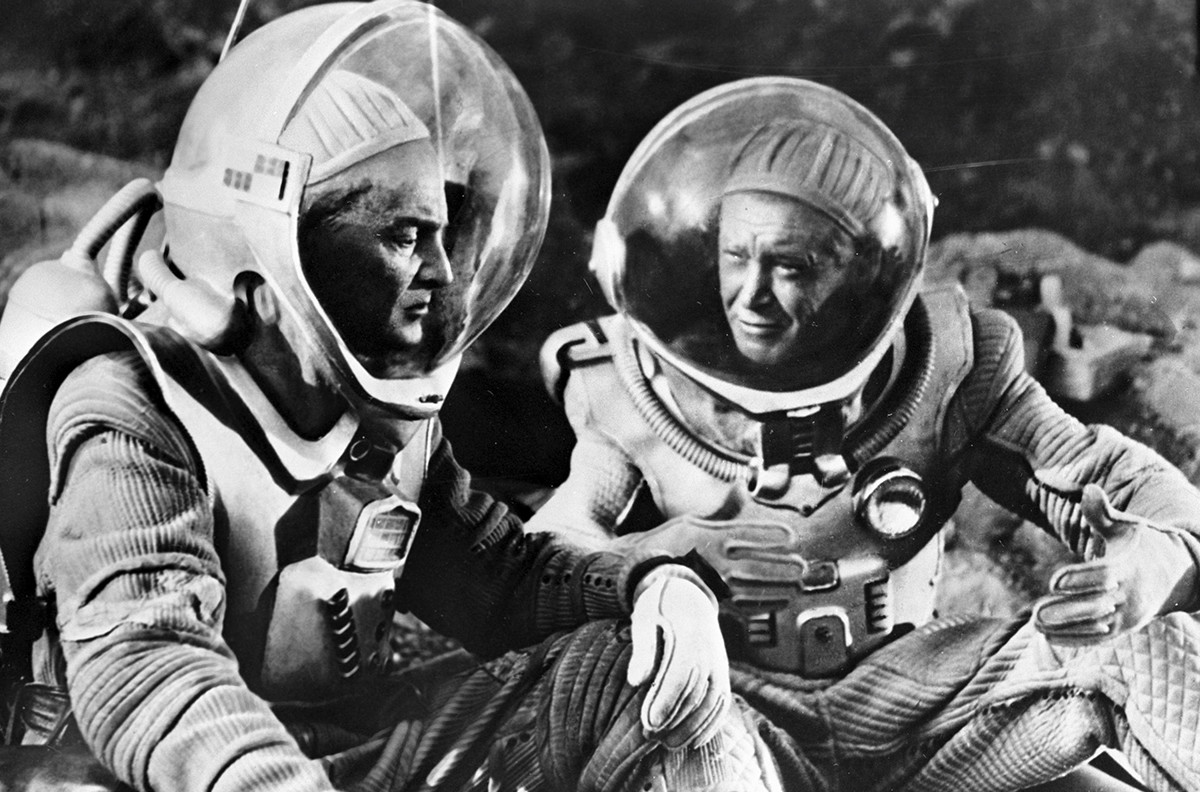 Pavel Klushantsev’s Planet of Storms is a too-often-overlooked sci-fi classic that has influenced generations of international film students. In fact, when George Lucas, the director of Star Wars, visited Russia in 1988, he specifically asked to meet Klushantsev, whom he considered the godfather of the Star Wars series.

Klushantsev is widely considered a pioneer in sci-fi visual effects and set design. It’s easy to spot many similarities between the costumes and sets in Planet of Storms and many more recent Hollywood sci-fi hits. The space suits the cosmonauts wear in Planet of Storms are almost mirror images of what characters play in recent blockbuster movies like Prometheus (2012) and The Martian (2015). Meanwhile, in Planet of Storms, the flying pod they use to get around the planet and C-3PO-style robot companion that helps them both look like they come straight out of Star Wars. All in all, watching Planet of Storms will undoubtedly give you a better appreciation of the origins of much of the amazing sci-fi worlds we experience on screen today.You can watch it here on Russian Film Hub. 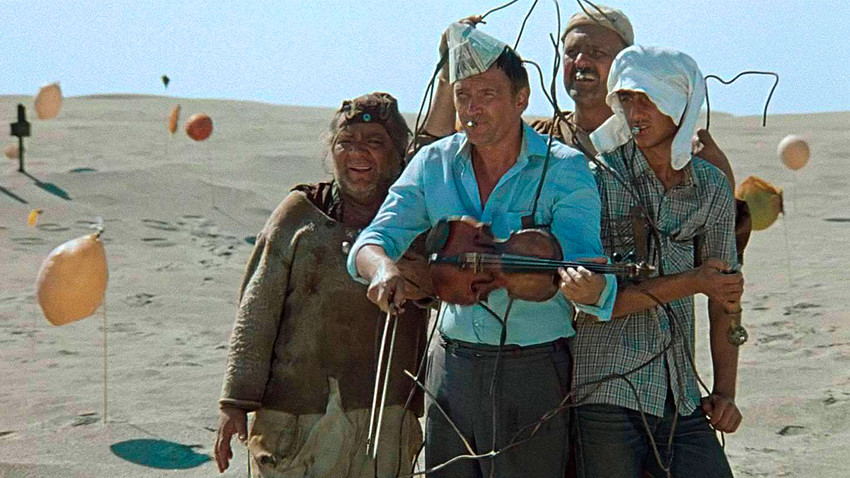 Kin-dza-dza is a cult sci-fi classic that explores some of the more grotesque aspects of humanity. The movie tells the story of two Soviet men who get stranded on the faraway desert planet called Pluke after accidentally touching an alien teleportation device. Their attempts to get Pluke’s locals to help them back to Earth fall on deaf ears until they reveal a box of matches. It turns out that the planet is largely depleted of its natural resources, and so its residents consider matches some of the most valuable items possible. 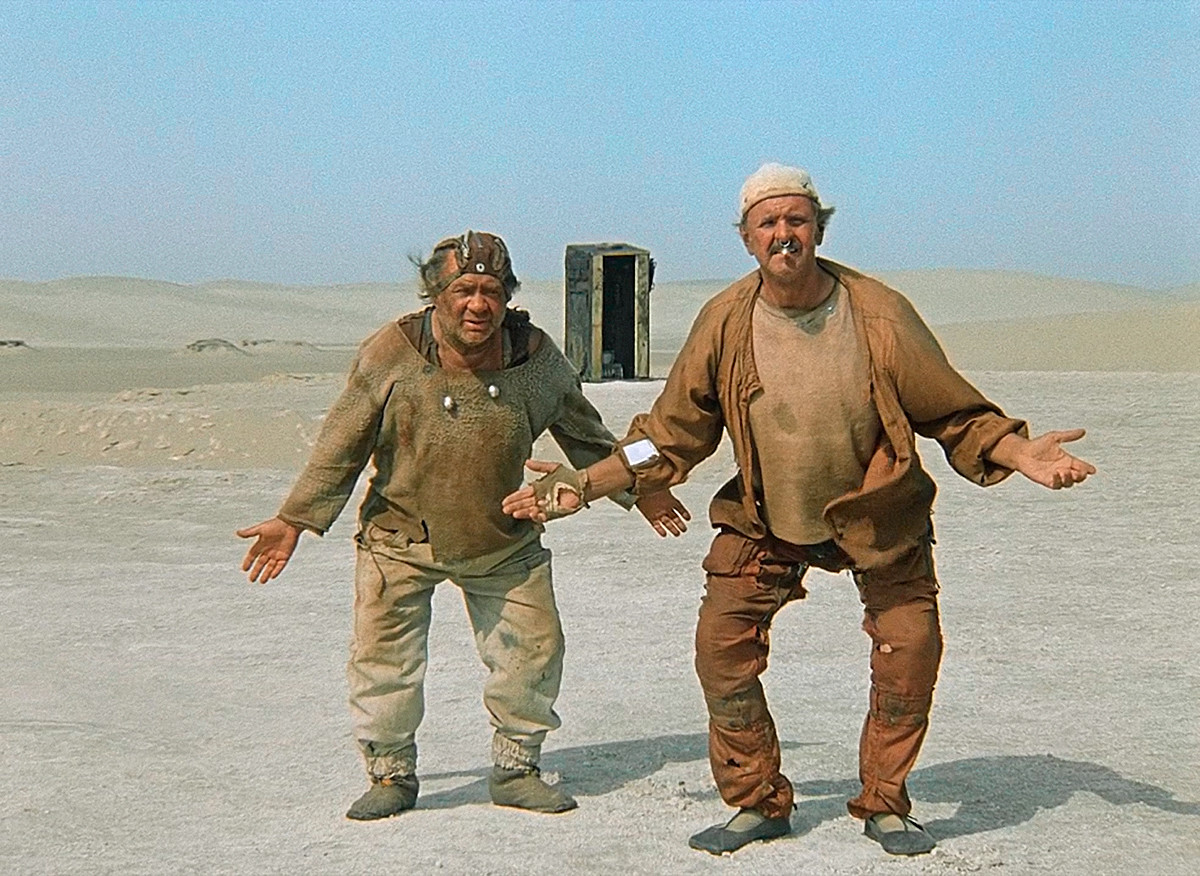 Full of black comedy and piercing social commentary, Kin-dza-dza depicts a technologically advanced society that is in many ways morally backwards. Plukian society is a rigid caste system divided into two groups: the privileged Chatlanians and the disenfranchised Patsaks. Patsaks are required to show their respect of and submission to the Chatlanians by performing a ritualistic bow and repeating the word “koo”. Meanwhile, unrestrained environmental exploitation of the planet has made drinkable water a rare and valuable thing. While the movie explores a dark, dystopian world, it’s definitely consistently laugh-out-loud funny and full of memorable, absurd scenes. For an unforgettable experience watch Kin-dza-dza here on Russian Film Hub. 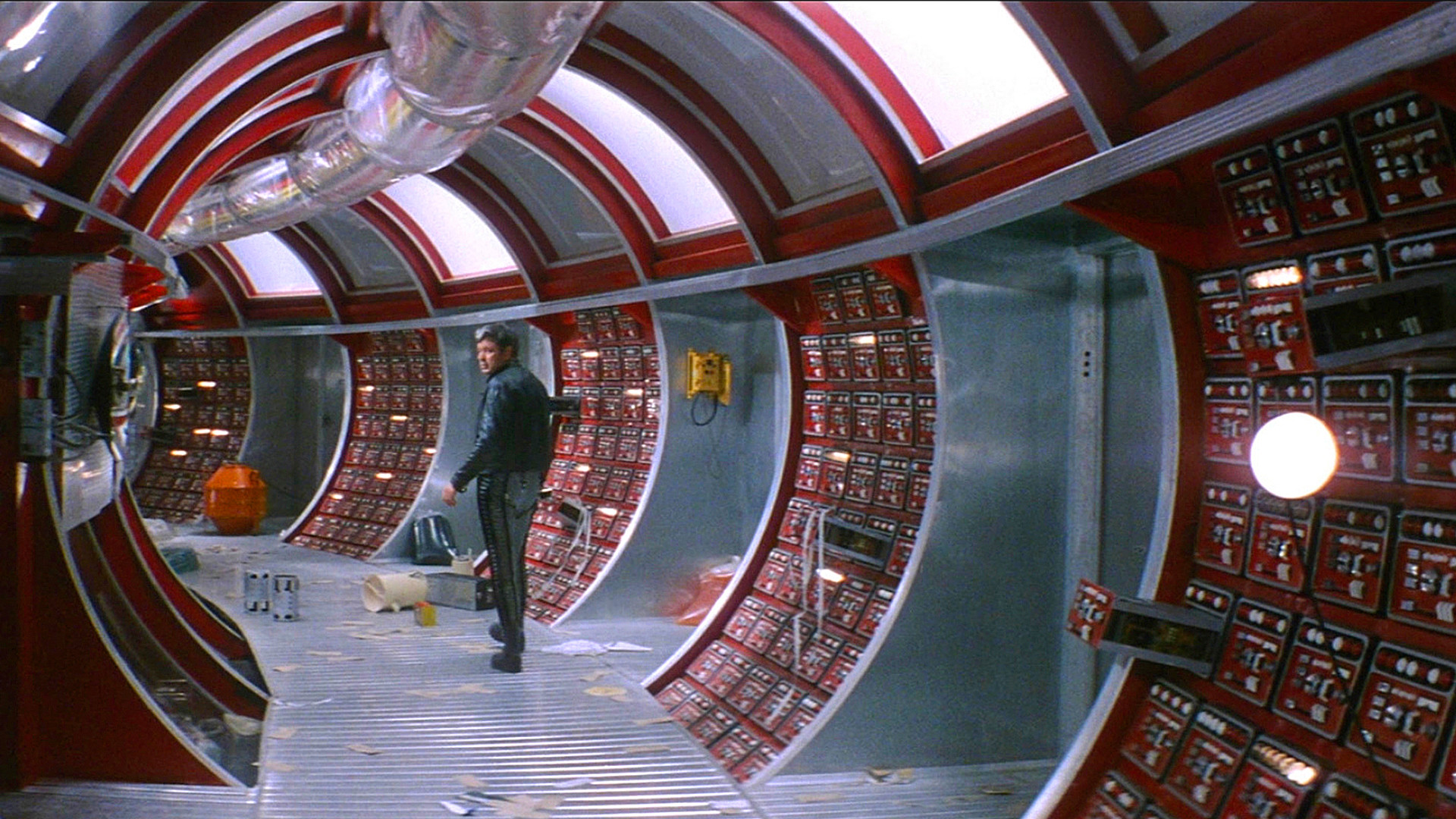 After Stalker, Solaris is undoubtedly rockstar director Andrei Tarkovsky’s best known movie. Based on the sci-fi novel of the same name by Polish author Stanisław Lem, the plot tells the story of a psychologist named Kris Kelvin, who is sent to investigate a space station crew of Soviet cosmonauts orbiting the oceanic planet of Solaris. It soon becomes clear that some unexplainable phenomenon is causing everyone on the space station to go crazy, falling into a hallucinatory abyss.

Ivan Vasilyevich Changes His Profession (a.k.a. Ivan Vasilyevich: Back to the Future) is a hilarious time travel classic by the most popular director of all time in Russia, Leonid Gaidai. It’s a really amazing movie and makes it onto Russia Beyond’s Top 10 Soviet Movies list. Gaidai created many of the biggest Russian blockbusters, including Operation Y, The Diamond Arm, and Kidnapping, Caucasian Style. You’ll recognize a lot of the same actors throughout his movies, which makes his cinematic world all the more fun and immersive.

In Ivan Vasilyevich Changes His Profession, an inventor builds a time machine that creates a portal between the 1970s and 16th century Moscow. He then accidentally transports his nosey apartment building superintendent back in time, switching him with his lookalike, the haughty Tsar Ivan the Terrible. What follows is a series of ludicrous jokes and situations. For example, Tsar Ivan the Terrible is confused when he comes across a copy of the famous Ilya Repin painting that depicts the Tsar killing his own son. You can watch this fun historical sci-fi classic on Russian Film Hub. 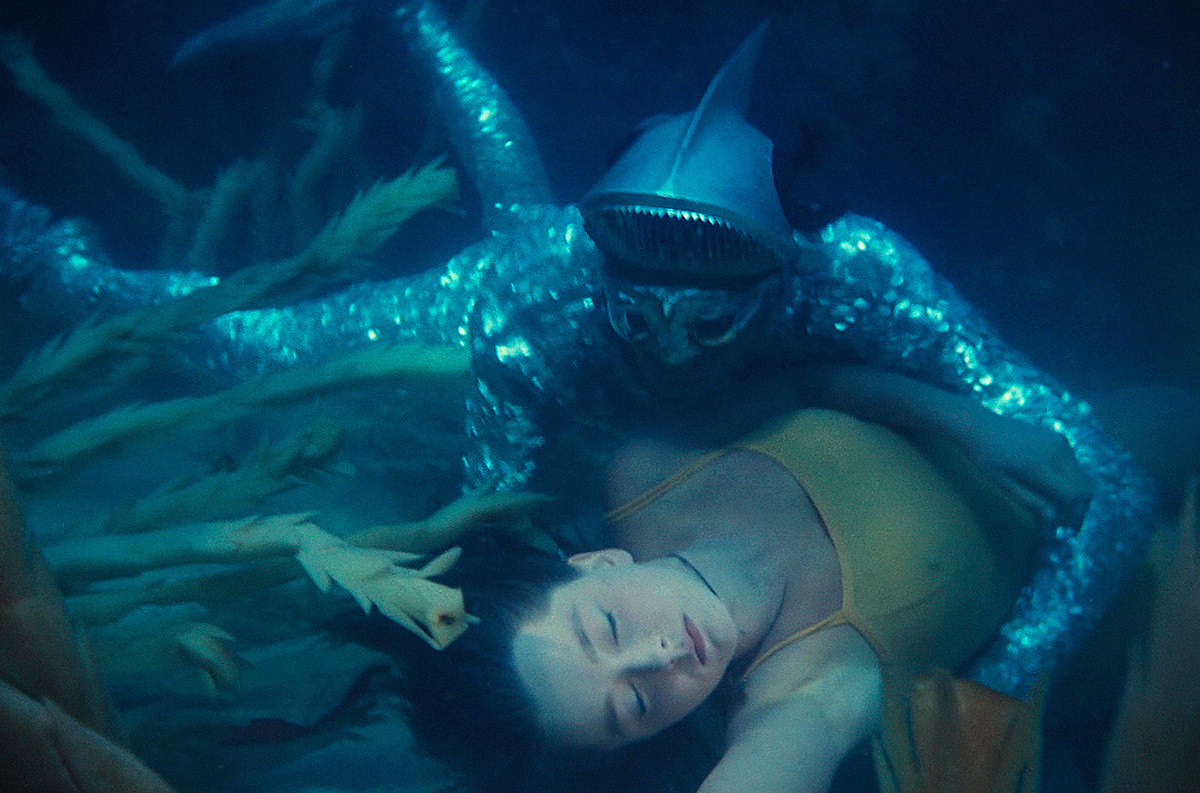 Amphibian Man was a wildly popular Soviet movie that tells a heartbreaking Little Mermaid-style story. Set in Argentina, the movie is about Ichthyander, a young man with shark gills that his maverick father transplanted on him to save his life. Ichthyander largely lives in the sea, as he can’t stay on dry land for too long. However, he soon gets involved with the above-water world when he saves and falls in love with a drowning local beauty. Conflict arises and Ichthyander has to compete with cruel and exploitative local pearl fishers. Sadly, the love that you want for Ichthyander to enjoy doesn’t come to pass.

Although few outside of the former Soviet Union have had the pleasure of seeing Amphibian Man, the movie has two Hollywood claims to fame. First, Quentin Tarrantino, director of Pulp Fiction and other hits, has called it one of his favorite Russian movies, saying how he enjoyed watching a dubbed version in the 1970s. Second, many critics have labelled Guillermo del Toro’s Oscar-winning The Shape of Water a copy of Amphibian Man. Both movies share a similar plot and the same name for the main character - Amphibian Man. What’s more, The Shape of Water’s plot is supposed to take place in 1962, the year Amphibian Man was released. Realistically, though, these similarities are more likely than anything else to a respectful tip of the hat from a great director to a great Soviet movie. You can watch Amphibian Man on Russian Film Hub.