Moscow depicted on canvas throughout 200 years 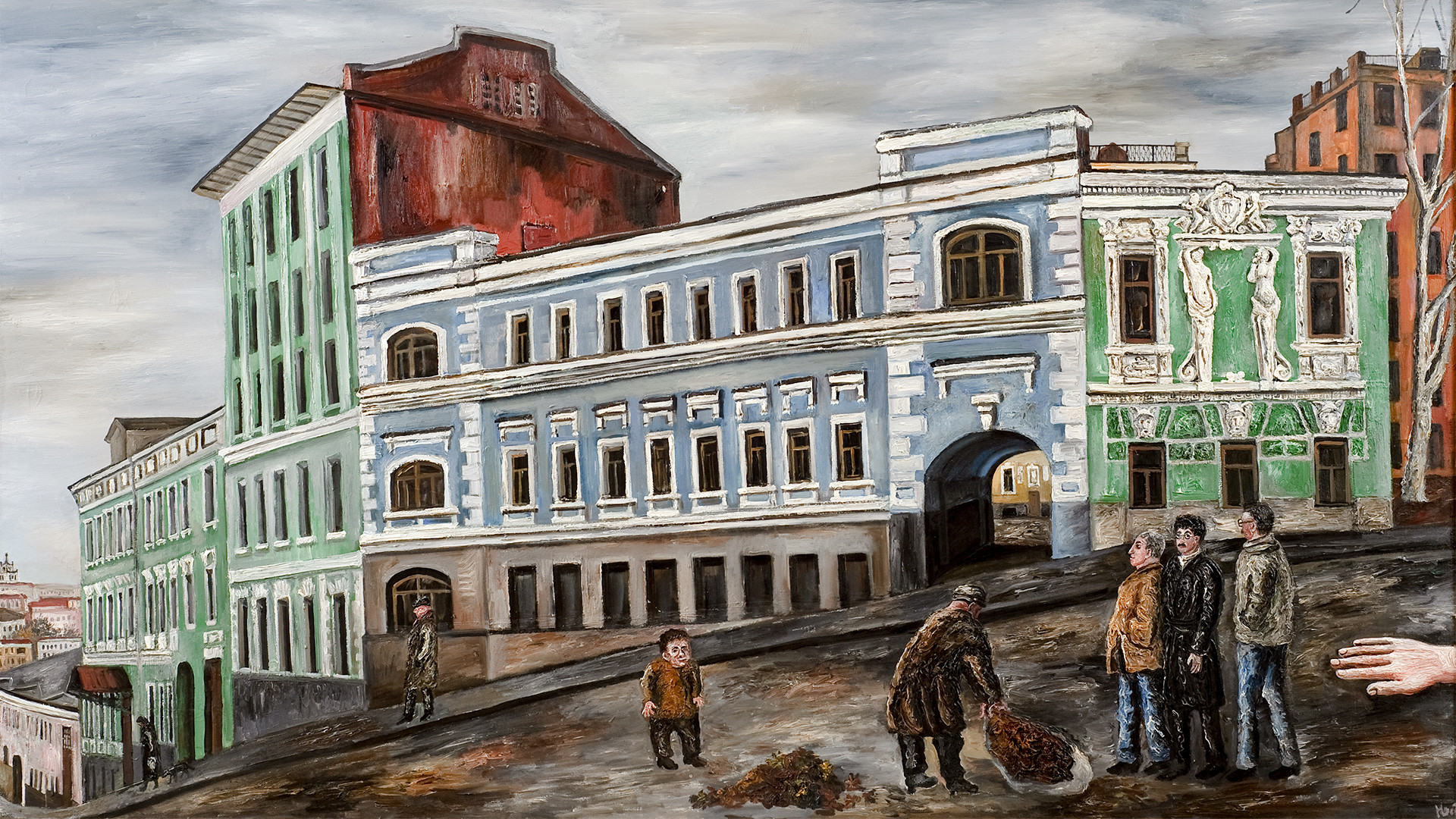 IN ARTIBUS foundation
Quiet courtyards and old wooden houses with white stone churches in the background are featured in paintings of the charming city of the 19th-20th centuries now on display in Moscow museums. The exhibition "Moscow Through the Ages" is open to visitors at the Tretyakov Gallery on Sept. 8-Jan. 21. The exhibition "Moscow Looking Back" by the IN ARTIBUS Foundation is open on Prechistenskaya Embankment on Aug. 30- Sept. 30. We choose the ten most impressive paintings. 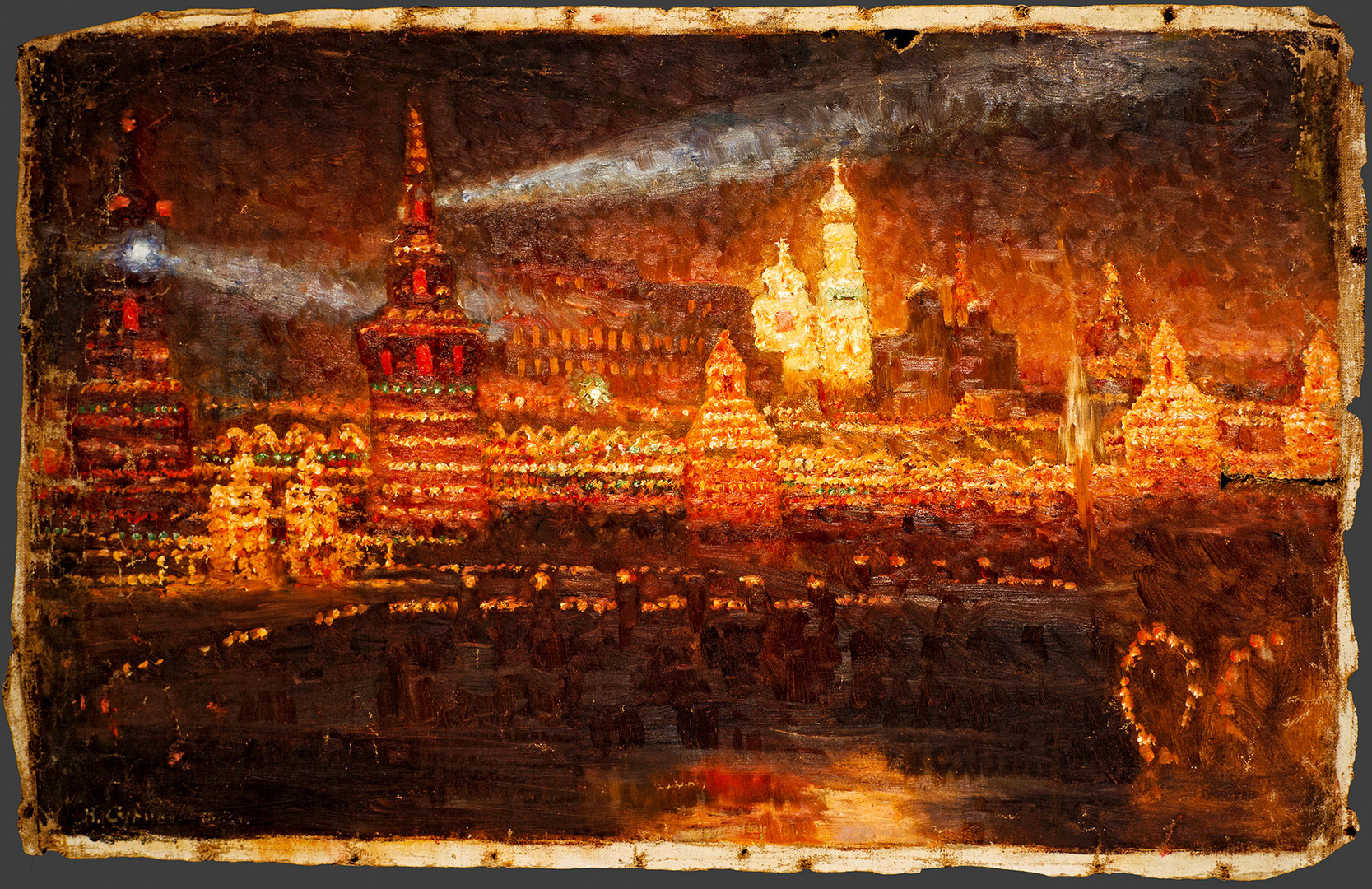 Kremlin, Russia’s most famous sight charms with its majestic gates, towering domes, ornate symbols and fabled clock-tower. Most of the structures were built in the 14-17th centuries and were meant to be imposing; they remain so today. This is not only the center of Russian power, but the heart of the country. 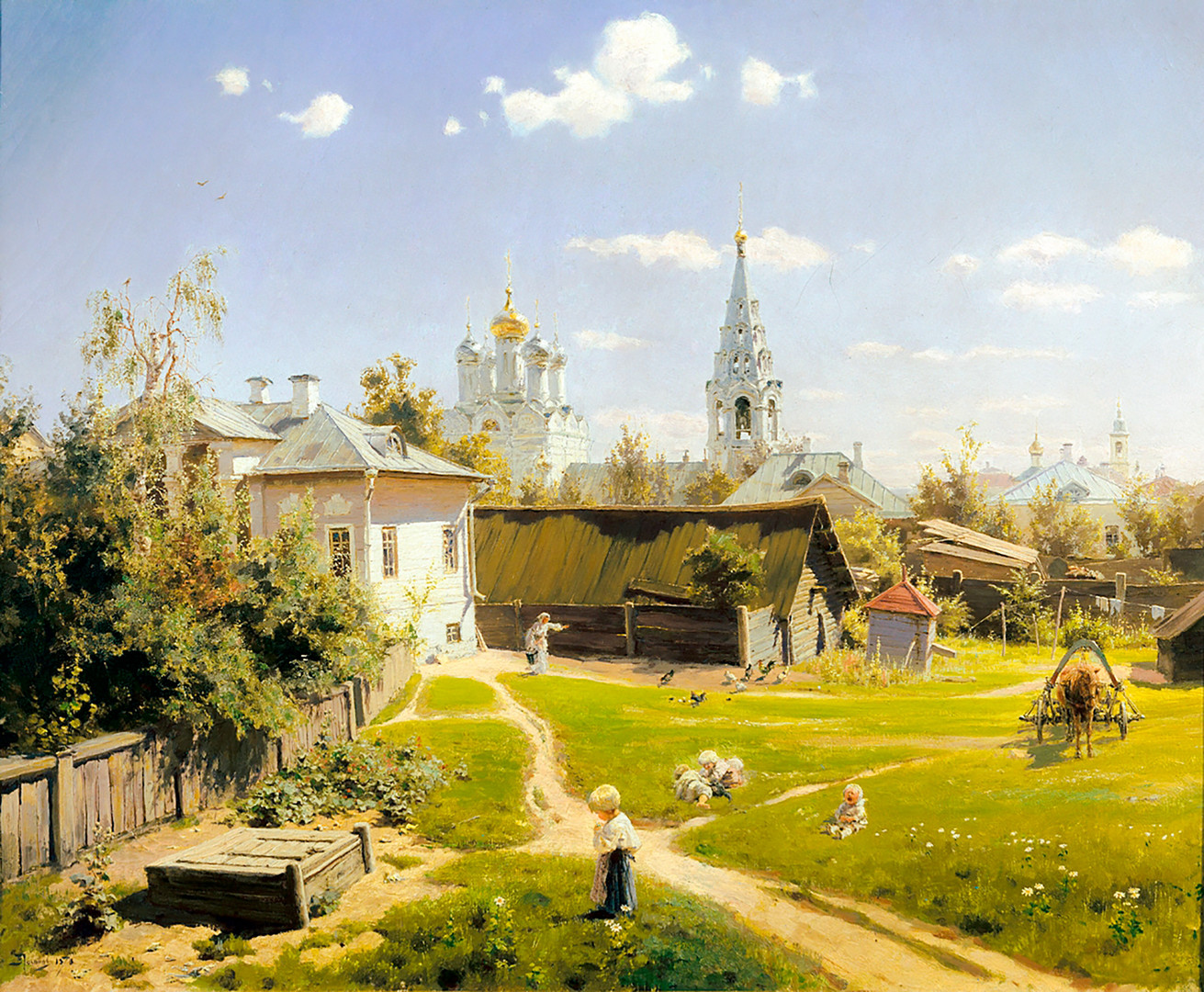 It’s hard to believe that many Moscow districts at the end of the 19th century looked like a village. Wooden houses and barracks remained even near the center until the 1960s. 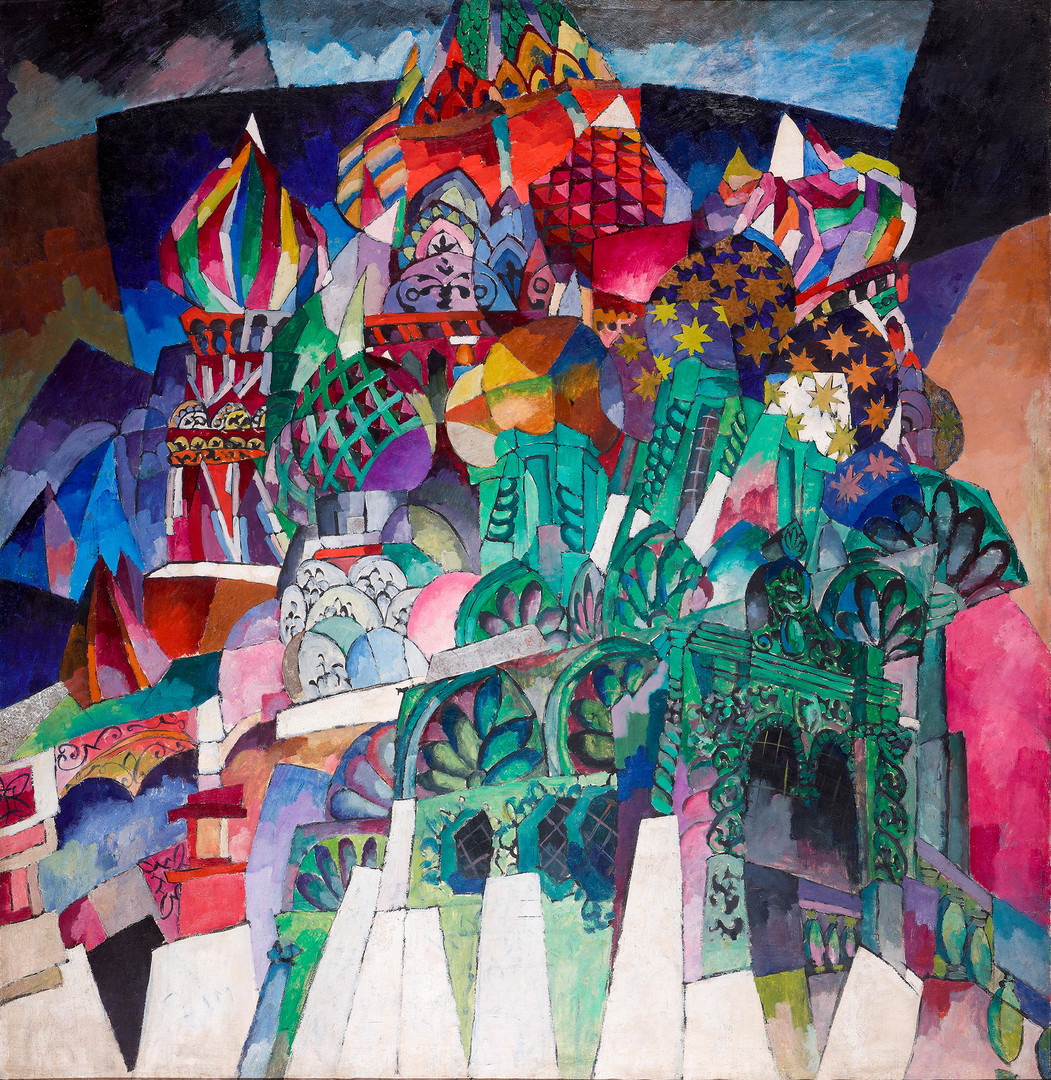 This cathedral is probably one of the most recognizable symbols of Moscow, replicated on thousands of postcards and souvenirs. St. Basil's was built by Ivan the Terrible in 1555-1561 to mark the victory over the Khanate of Kazan. According to legend, Ivan the Terrible ordered the architects to be blinded after they completed work on this beautiful cathedral so that they could not replicate or surpass it elsewhere. 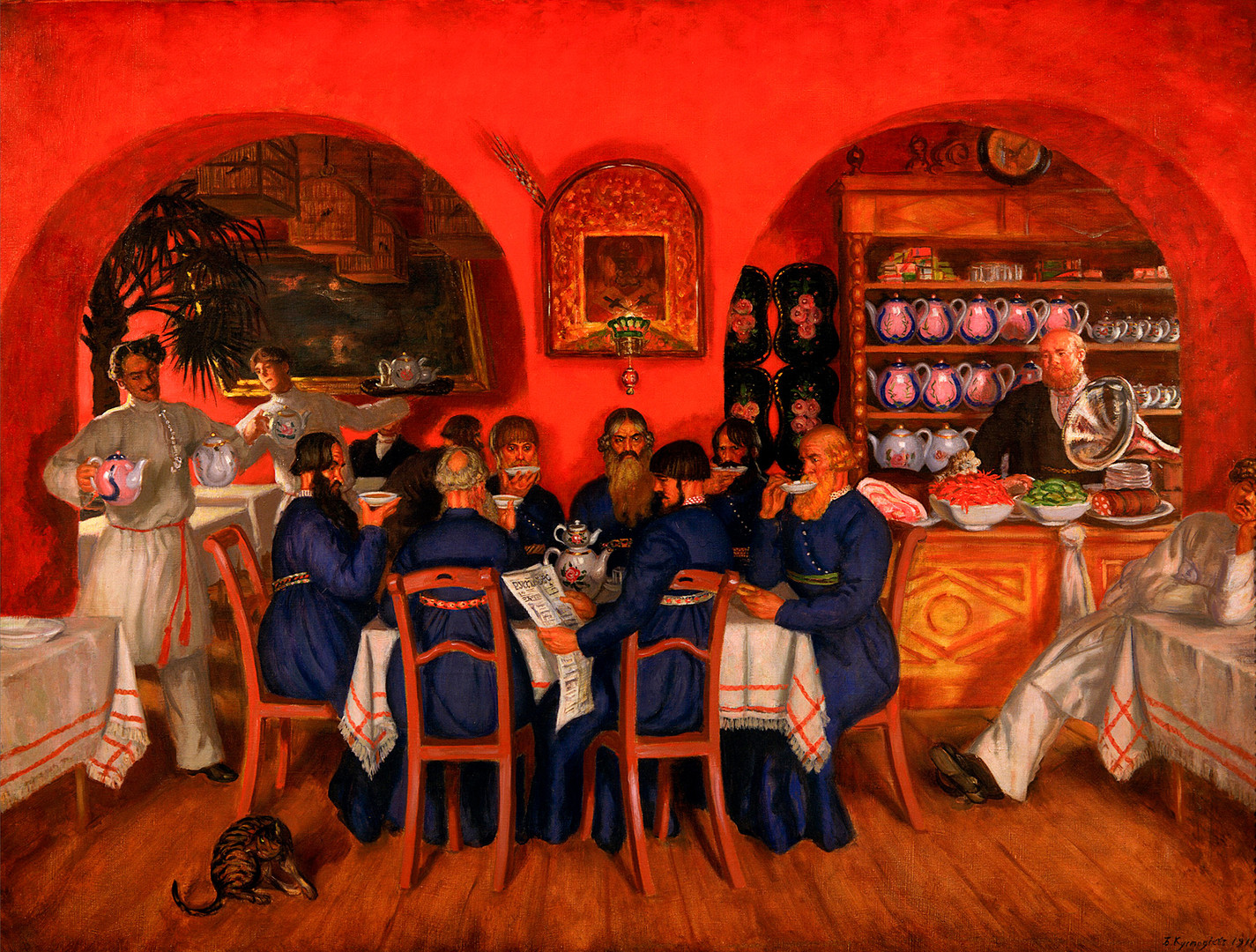 A traktir is a kind of motel with a small cheap café, where travelers could not only stay for the night but also have dinner. Russian aristocrats preferred to visit restaurants, so traktirs were places for the not so rich, mostly coachmen and the petty bourgeois. Schi(cabbage soup) and sbiten (a drink made from honey, water and jam) were regulars on the menu. 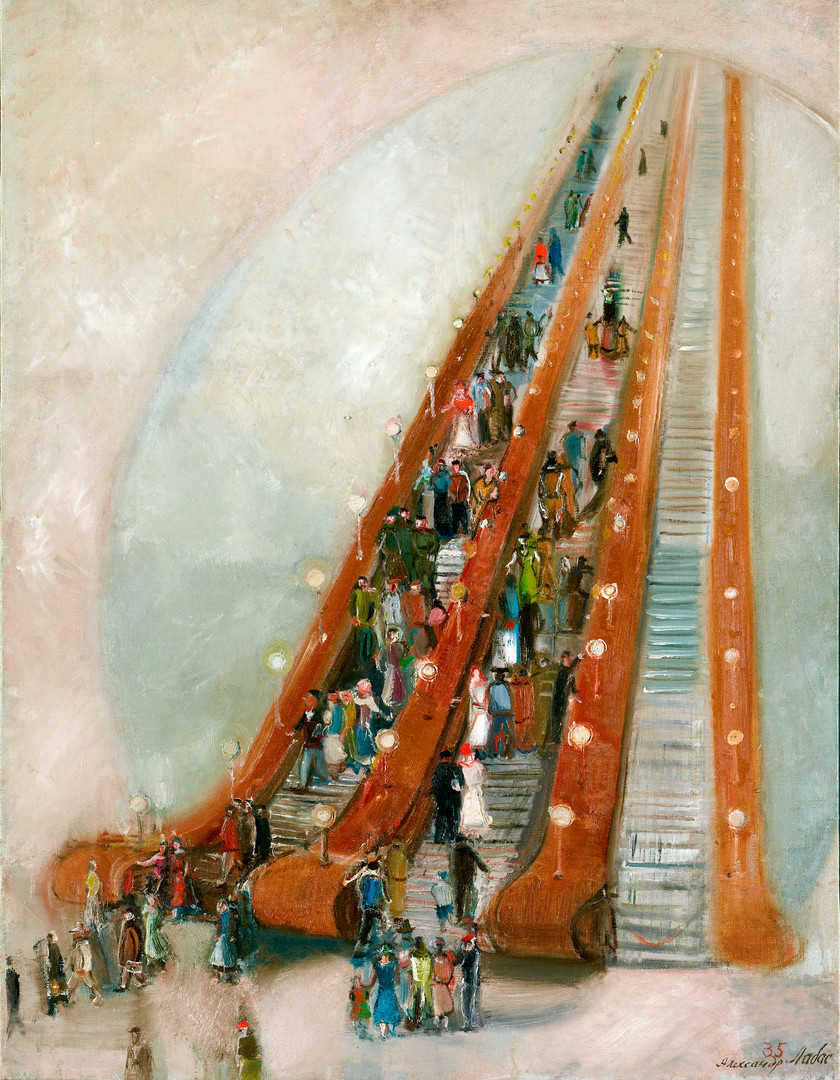 The Moscow Metro been serving the people of Russia's capital since 1935, and has grown into one of the world's largest and busiest underground rail networks. In the 1930s, there was only one line (red) with 11 stations. Today there are 206 stations in the capital's subway system (44 of which are cultural heritage sites), and the network is continuing to expand. 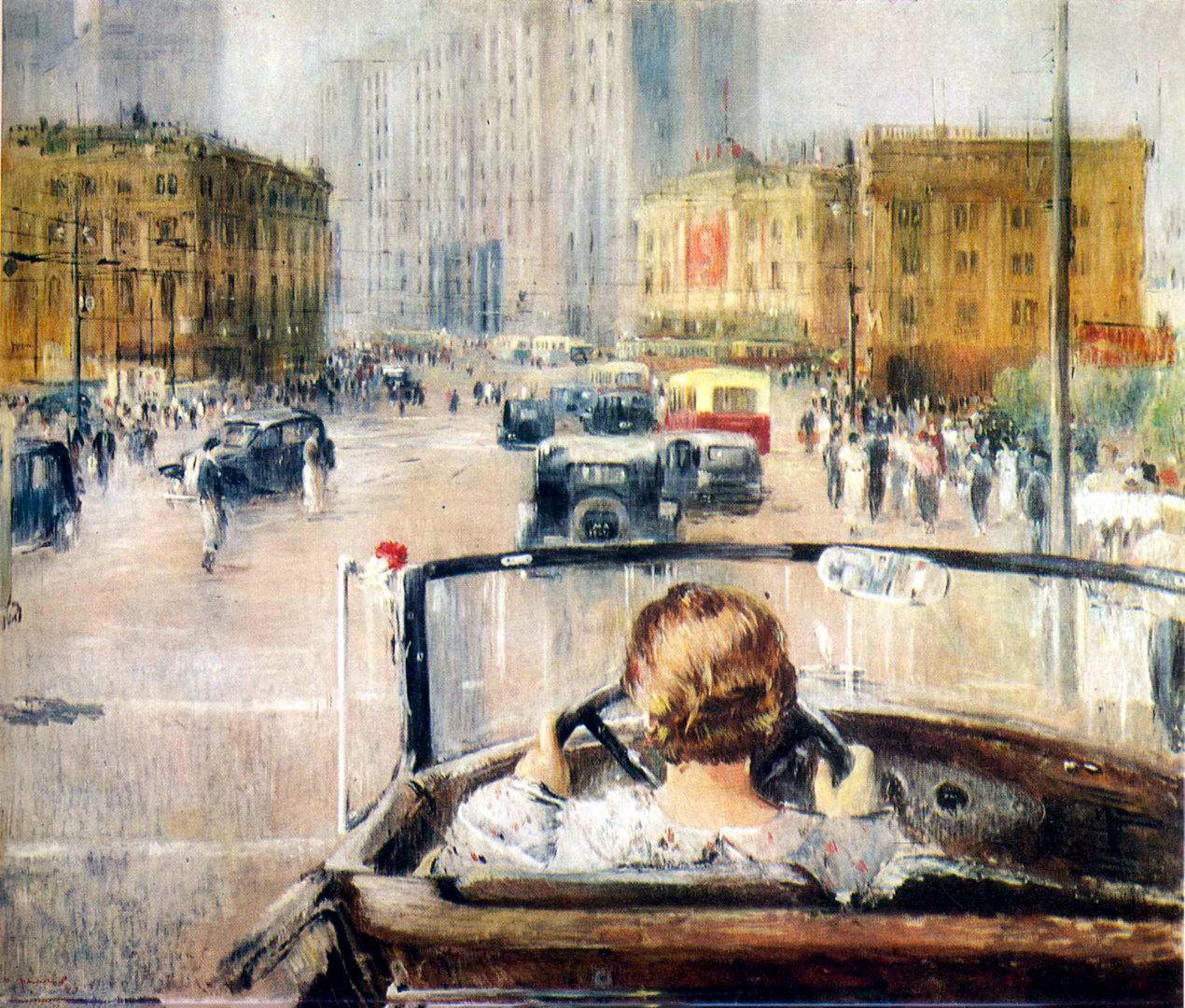 This painting was drawn in the midst of Stalin’s reconstruction of Moscow. The general plan provided for the creation of new highways, bridges and Metro stations. 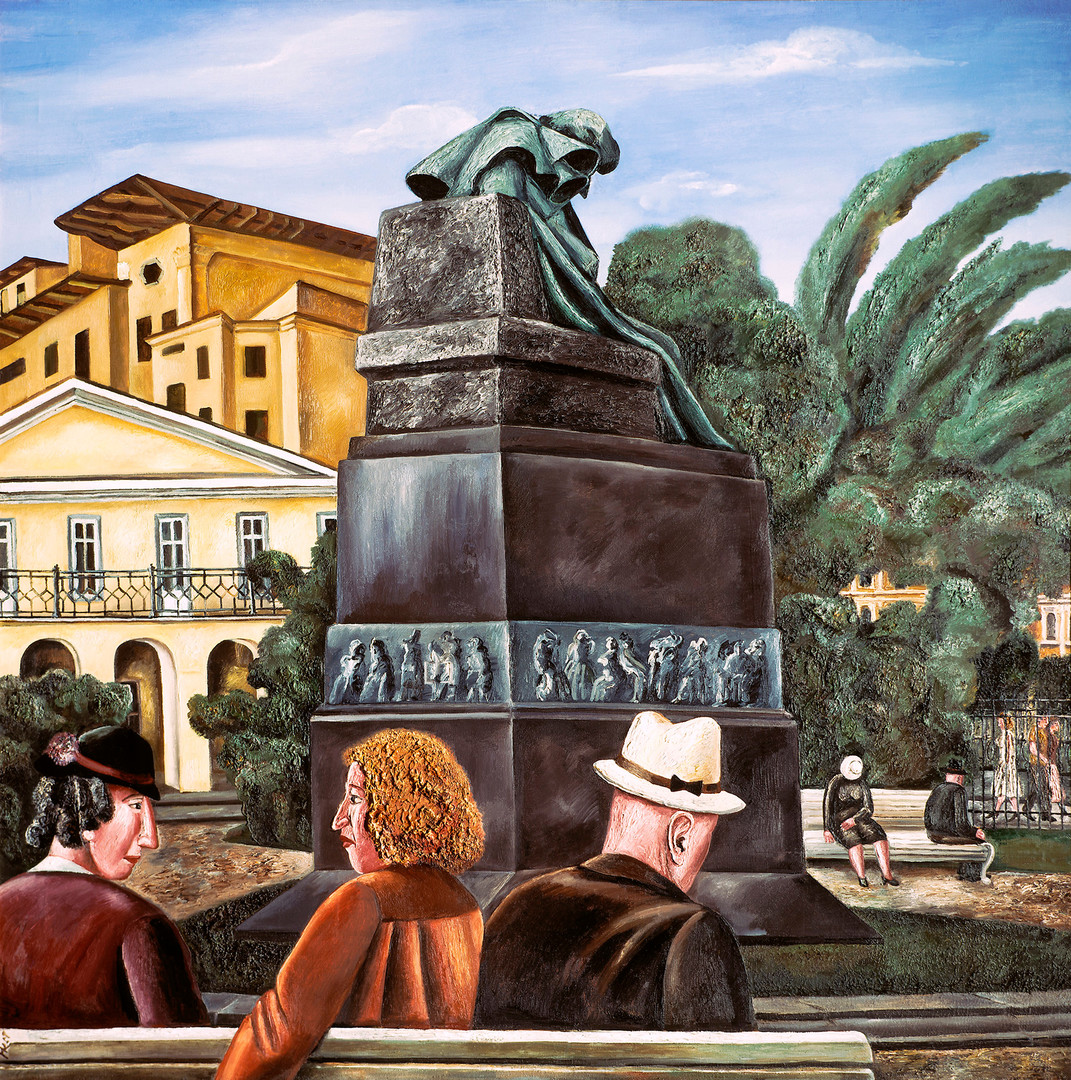 In this building on Nikitsky Boulevard, writer Nikolai Gogol spent the last four years of his life, until 1852. Here Gogol burned some of his manuscripts ten days before his death. The monument in the courtyard was installed to mark the 100th anniversary of the writer’s birth in 1909. In 1923, the house was turned into a museum of the great classic author. It was founded by Nadezhda Krupskaya, wife of Vladimir Lenin. 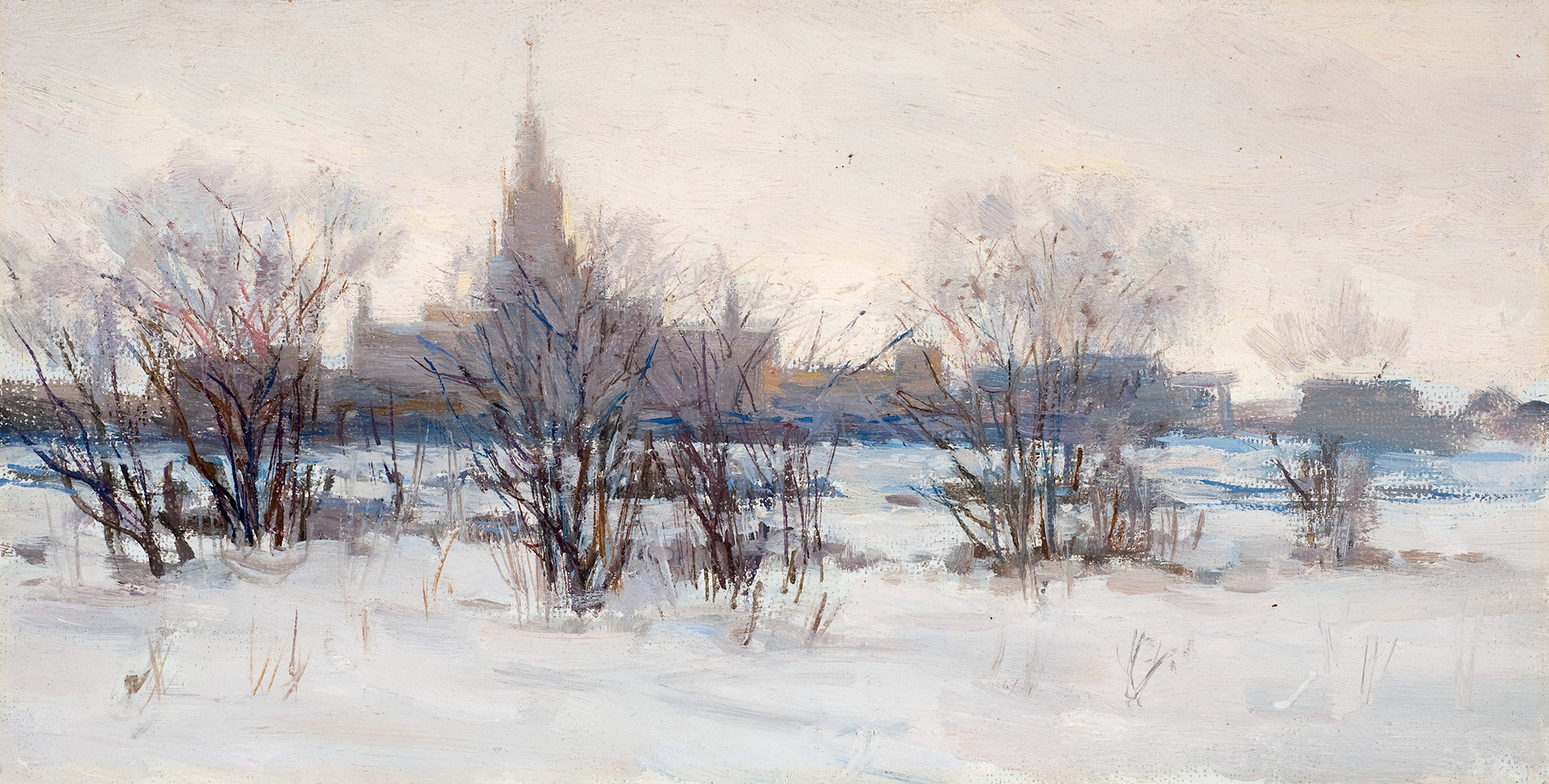 Lomonosov Moscow State University (MSU) was founded in 1755 and is one of the oldest and largest universities in the country. But its main building on Sparrow Hills (Vorobyovy Gory) pictured here was constructed only in 1953 and became the symbol of new era of Soviet architecture. 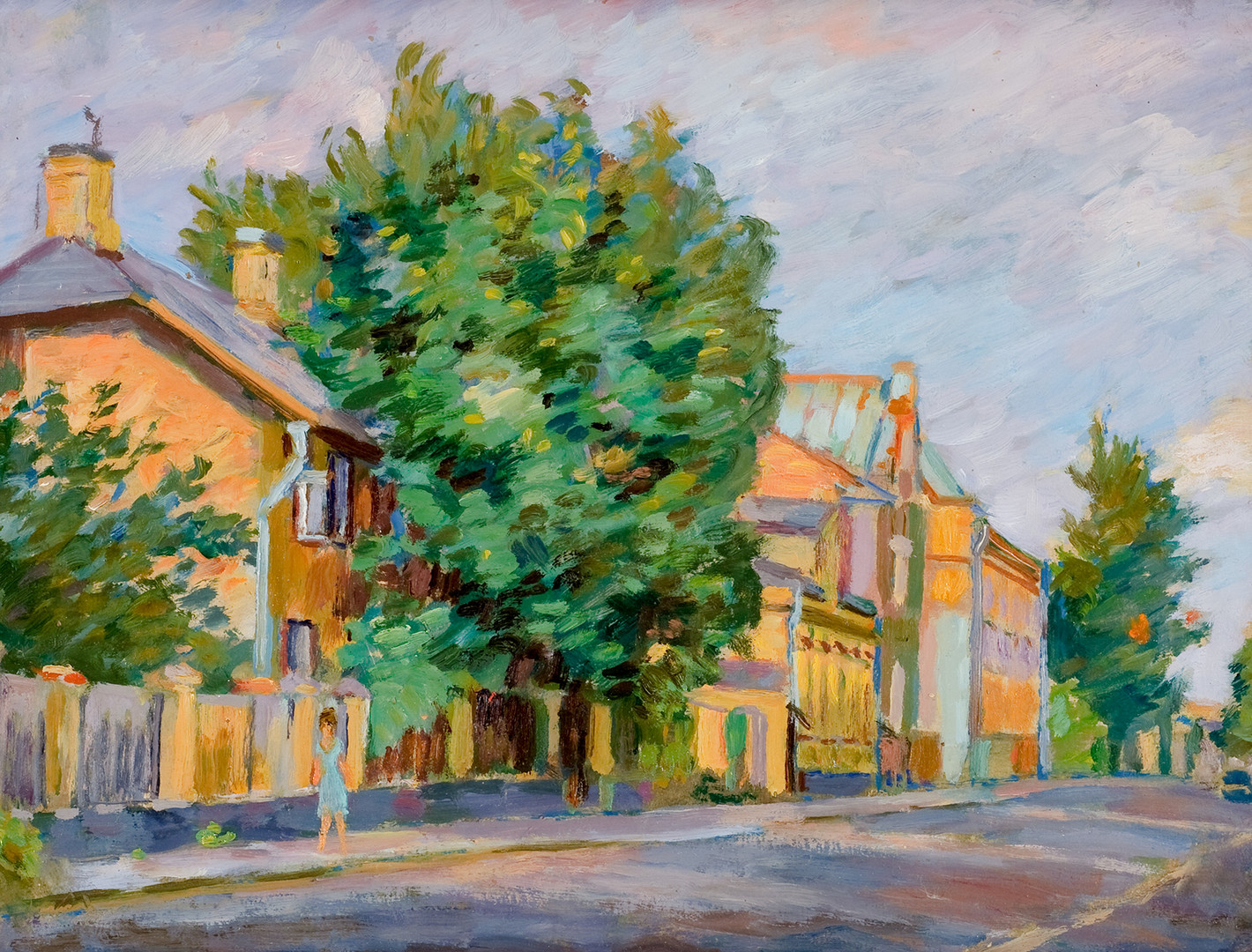 In the 1960s Moscow significantly expanded, forming new residential areas from the nearby villages. The era of the “Khrushchevkas" (low-rise apartment buildings) began. Old Moscow was still home to wooden buildings, where the trees were taller than the roofs. 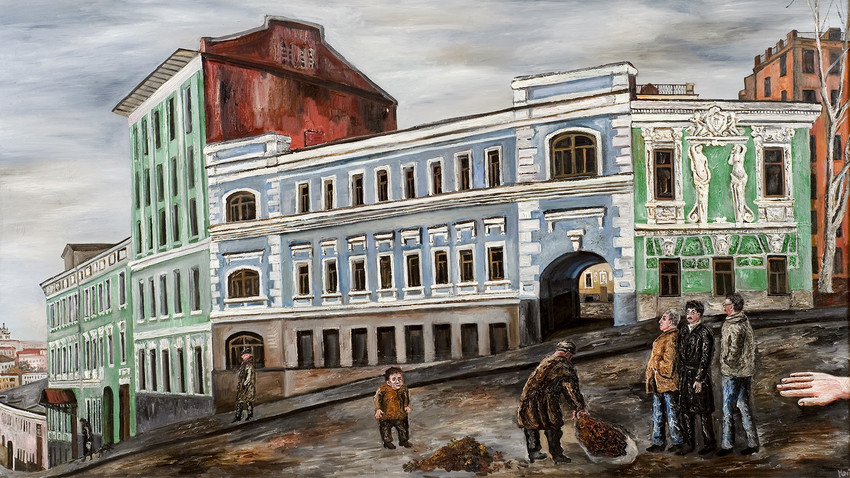 The Moscow House with Caryatids was built in the early 19th century after Napoleon's invasion. In 1896 it was purchased by craftsman Peter Sysoev (co-designer of the Metropol Hotel), who decided to decorate the house with his works. In the Soviet years, the house was divided into communal apartments. Later the building stood empty for a long time, before being turned into rented offices. The house was almost destroyed, and only in 2013 was it refurbished by a private investor.