Dymka: The secrets of making a medieval North Russian toy 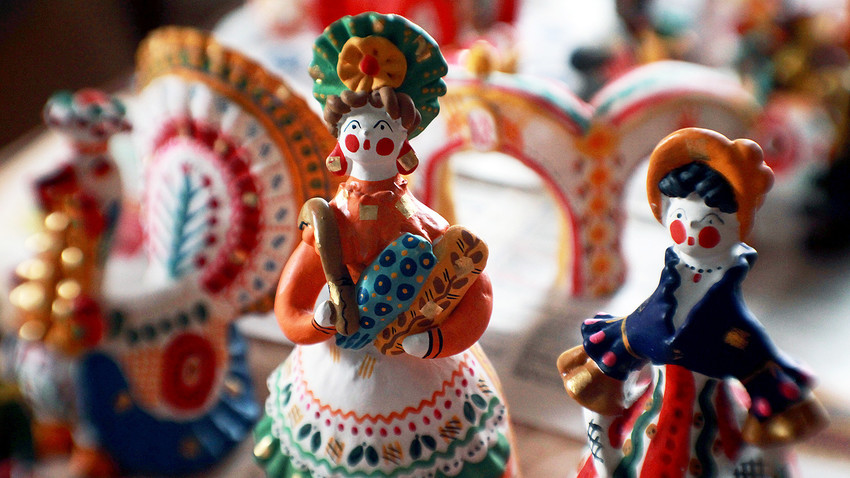 Pavel Smertin/TASS
The dymka toy is one of the oldest crafts in Russia, born in the land of the Kirov Region, in the village of Dymkovo, more than 400 years ago. To this day, the toy masters safeguard their traditions.

The toy is one of the oldest crafts in Russia, born in the land of the Kirov Region, in the village of Dymkovo, more than 400 years ago. To this day, the toy masters safeguard their traditions.

Dymka is truly a unique toy because no one replicates the other. Each has its own subject and ornamentation.

“Usually, the toy consists of several details. Red clay provides the possibility to ‘glue’ all the details together without external means. What’s necessary is an instrument that smooths the joint areas so that the seam is not visible,” said Oxana Romanova, an instructor of Dymka sculpting and painting at the Amphora Ceramics Academy.

The finished toy is left to dry for 5-7 days, and then it’s placed in an oven and fired at a temperature of 900 degrees Celsius. Afterwards, whitening is applied.

No one knows exactly when and who first thought of the white covering for the . Its predecessors – clay balls and whistles – were either black (they were tarred) or red, the color of clay. Some think that the whitening of the toys began in the early 19th century when porcelain was in vogue among elites.

“The peasants, seeing porcelain in their masters’ homes, adopted the white background, which was made from powdered chalk that was diluted in milk. The toy was dipped into the mixture and then allowed to dry. As it dried the milk soured, allowing the primer to adhere very well,” Romanova explained. 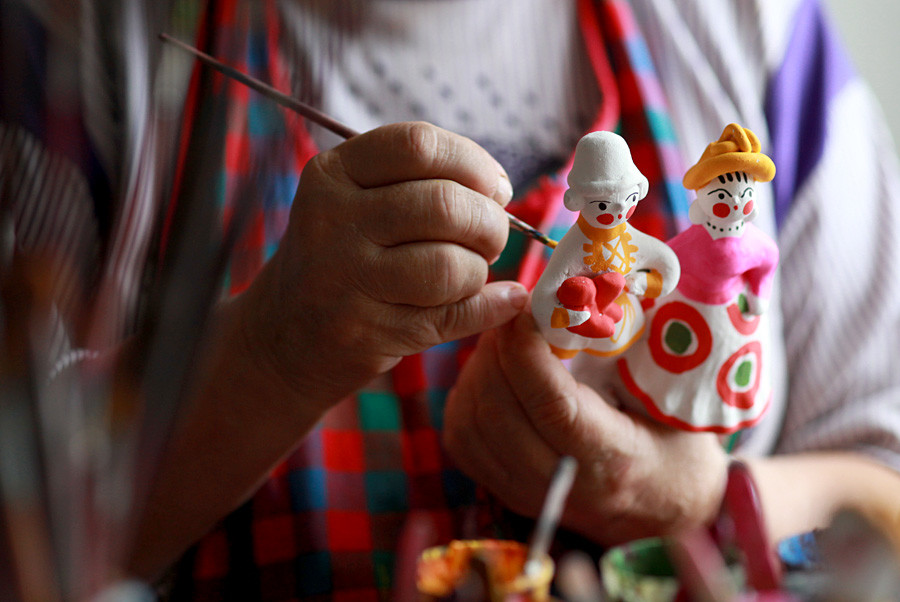 People were also very inventive in preparing the colors: using egg yolk, and kvass. Despite the peasants’ limited possibilities, the color range was broad and vivid. Pale hues are never used in the manufacture of Dymka, and the patterns are often simple. The first masters didn’t have special instruments, and at times they didn’t even have brushes.

Dymka toy masters were inspired by subjects from life. “They sculpted everything they saw around them: animals, scenes from peasant life, fishermen, women with the yoke, beautiful ladies and handsome gentlemen who they saw at fairs,” said Romanova

In Soviet times Dymka masters fancied topics related to scientific and space achievements; for example, a man and a woman in spacesuits standing under an apple tree like Adam and Eve very popular among Dymka collectors. These characters are thought to represent Gagarin and Tereshkova. 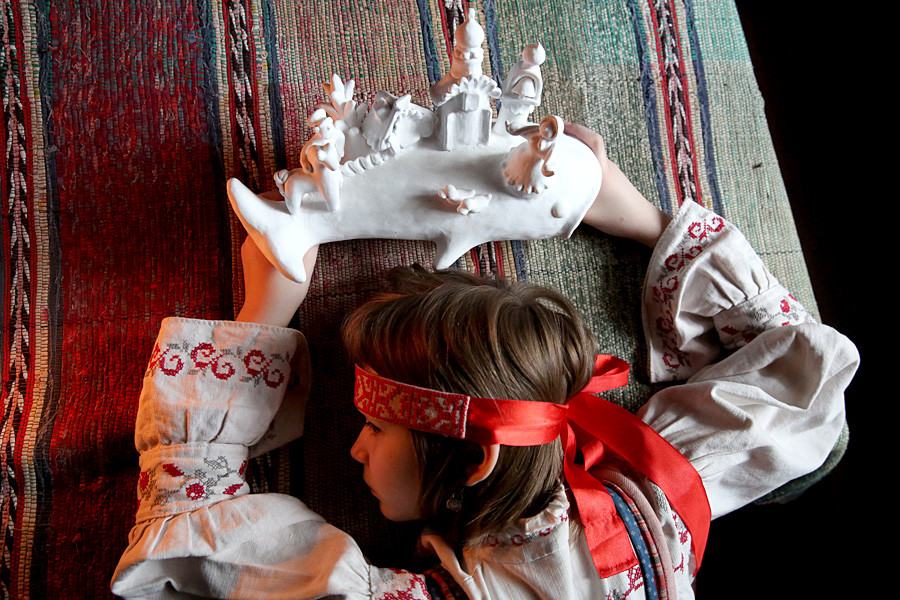 Funny and silly events from the lives of the masters themselves also made their way into the art form. Zoya Penkina, a hereditary Dymka master, was inspired by her first impressions of the Moscow subway, and created a composition featuring an excited woman who gets stuck in the and is observed by an old man who is also excited.

The Dymka toy in its traditional form could have gone extinct 100 years ago, but it was saved from oblivion by Anna , the only Dymka master who sculpted the toys according to and by an artist from the city of Vyatka, Alexei Denshin. He was the one who popularized the craft, published albums, organized national and international exhibitions, had workshops built and supplied the masters with all the necessary tools. 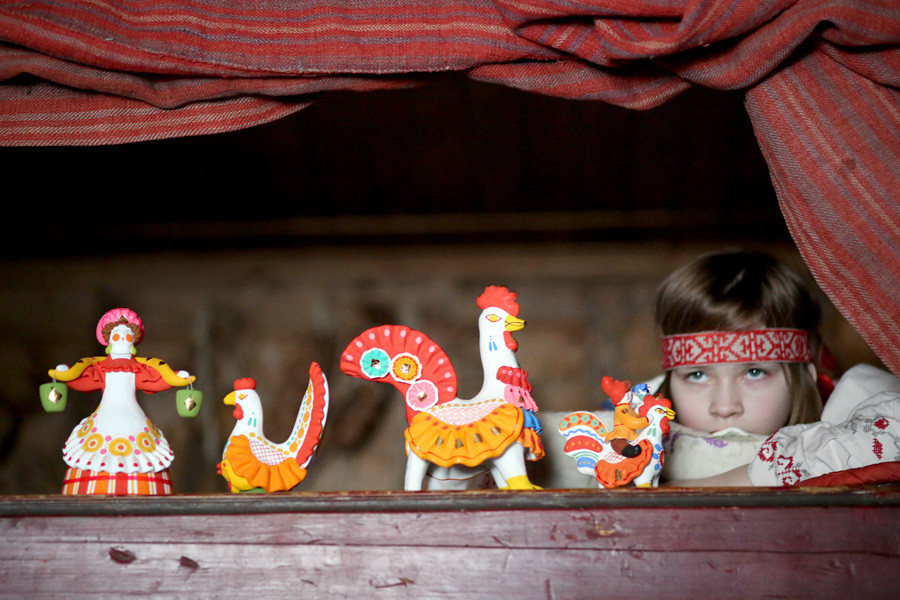 Later, the Kirov Artist Union created an Artistic Council to monitor the use of traditional canons in the manufacture of the Dymka. Toys not prepared according to tradition were received negatively and immediately destroyed with a hammer. This method prevented the appearance of a new branch of the craft.

At first, Dymka production was taught in families, and knowledge was passed down from mother to daughter. But by the 1960s the philosophy became less rigid and students were accepted from the outside. The future masters had to pass an exam on painting, and composition and take a unique test: a simple figure was placed before the students, from which they had to make an exact copy. They copied these common toys until reaching perfection and then created their own forms. Long ago, many people wanted to become Dymka masters, but today there are only 7 to 15 students per school.

The largest collection of Dymka toys can be found at the Museum of the Dymka Toy, and at the Vyatka Vasnetsov Art Museum. It is possible to purchase Dymka toys through the official site.