Culture
Peggy Lohse
The gold embroiderers of Torzhok (240 km north of Moscow) worked for the Romanovs and then for the Soviets, but in the 1990s their factory and traditions almost disappeared. How did they come back to life to serve the Russian elite again today?

The golden threads of Torzhok

The chaplains and priests of the Russian Orthodox Church wear them. Successful army commanders wear them. They connect the Russian coat of arms and the national flag. Everywhere in you can see and buy these golden brocaded souvenirs. They cover bags, wallets, scarfs, glasses cases and smartphones, and you see them in train stations, and souvenir shops.

But the hometown of goldwork is just a small city in the Tver region called Torzhok. The city lies on the federal M-10 highway that runs between Moscow and St. Petersburg. Stop by and take a look at this very old and luxurious Russian handicraft. 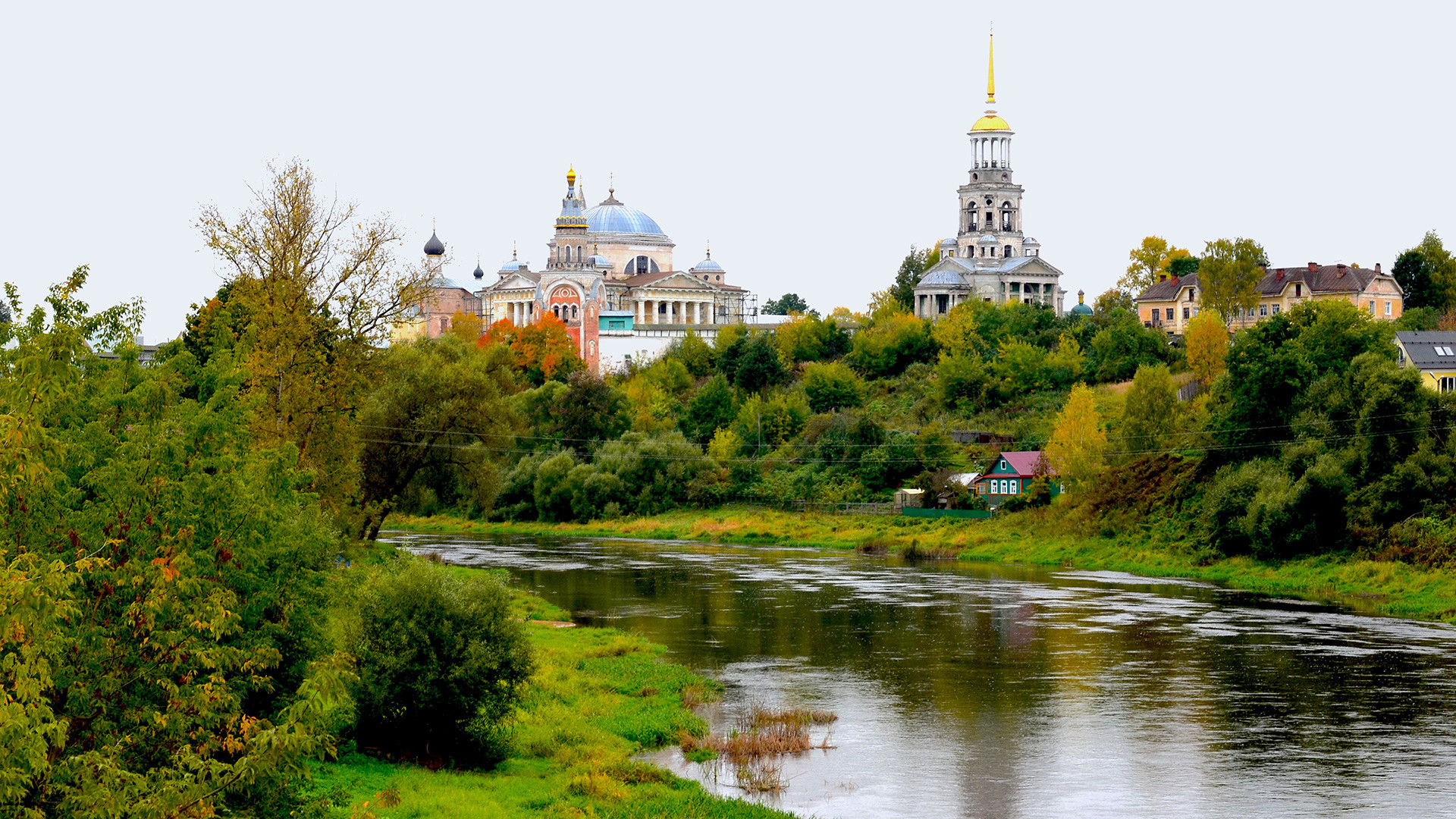 Hundreds of years ago, the Mongols and Tatars brought gold threads from the Central Asian steppes to the western part of Russia. In the region surrounding Torzhok, goldwork was present as early as the 10th century. One story tells how Princess Olga of Kiev received a piece of goldwork as a present from a monk, took it with her to the capital and showed it off to all the noblemen. The oldest pieces of goldwork found in Torzhok have been dated back to 1238. 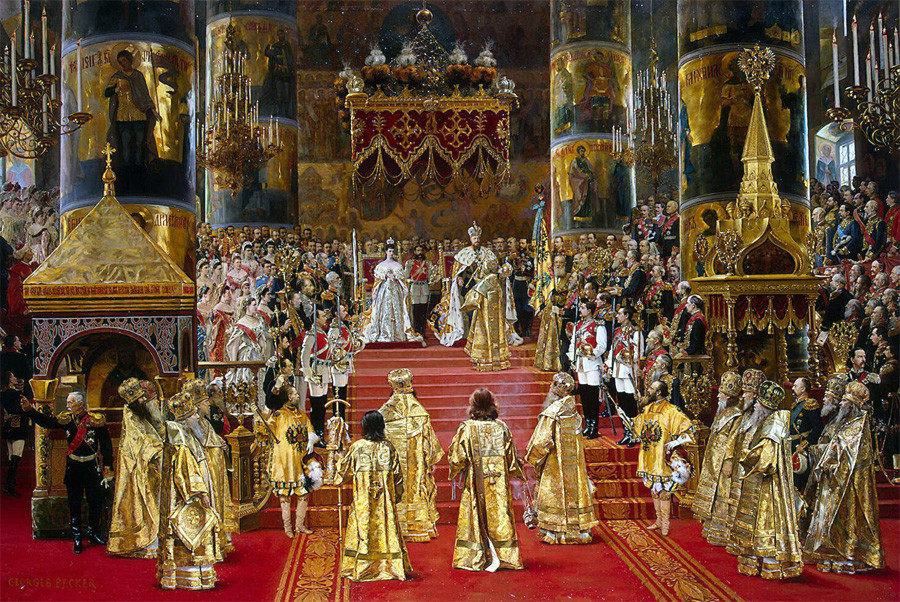 The coronation of Emperor Alexander III and Empress Maria Feodorovna (1888).

Although it was treated like a family handcraft passed on from mothers to their daughters, goldwork meant nothing to the average person beyond the fact that the material used, the gold threads, were expensive enough to keep farmers away. The threads of silk and real gold are burned, which is how they get their golden shine. Today, production takes place in a small village in the Vladimir region.

The embroiderers — or Novotorzhsky, as the locals call themselves — soon became famous throughout Russia. The Tsar’s family ordered items from them, and about 30 local girls were invited to St. Petersburg. Foreign travelers and merchants also brought goldwork back from Torzhok to show off at home as a souvenir from Russia. 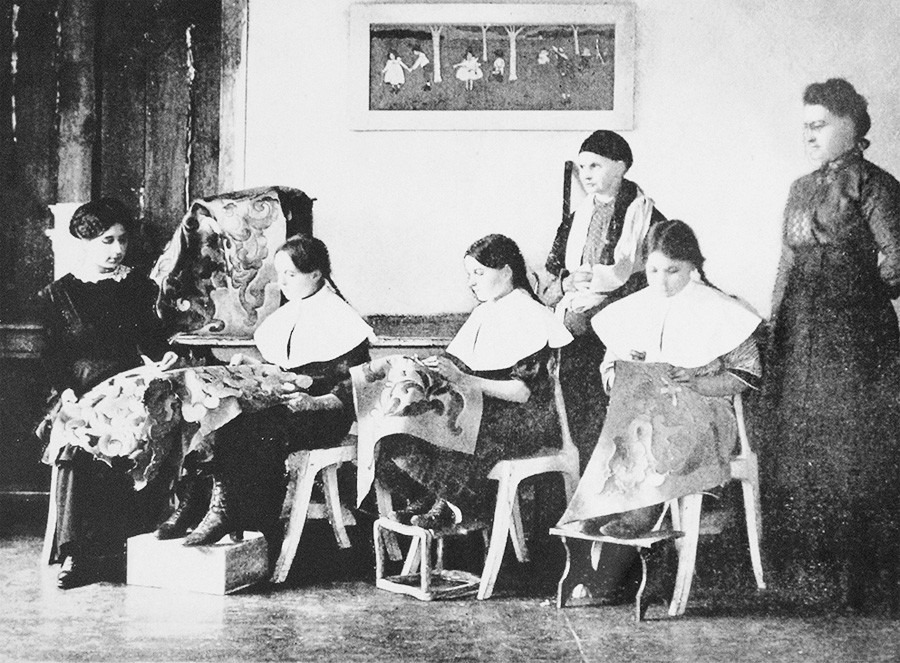 The goldwork school in Torzhok.

Nevertheless, it was only in 1894 that Dmitry Romanov, a local public figure, opened Torzhok’s first goldwork workshops. The Romanovs soon began collecting the best pieces for a museum. In 1923, the first Torzhok school of goldwork was opened. 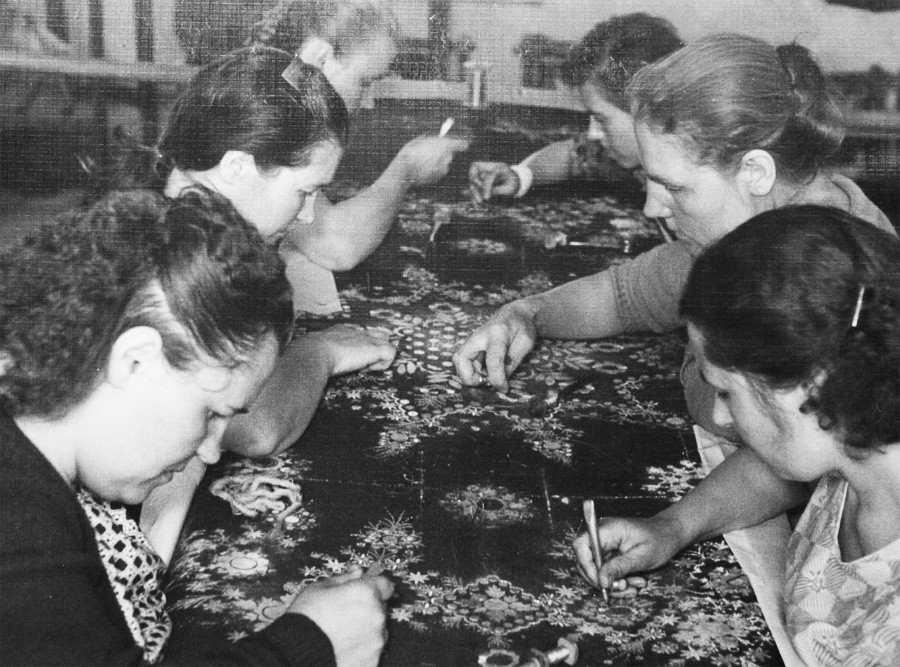 Although the Bolsheviks did not officially condone demonstrations of wealth, after the revolution the demand for goldwork rose like never before. Why? Because all pennants and banderols were embroidered in Torzhok. And so it was that the small goldwork school was turned into the now famous March 8th Goldwork Embroidery Factory. Up to a thousand women worked here at one point. In times of war, the Torzhok gold embroiderers made both leather clothes for the battlefield and also golden insignia that Red Army war heroes wore for political events and demonstrations. 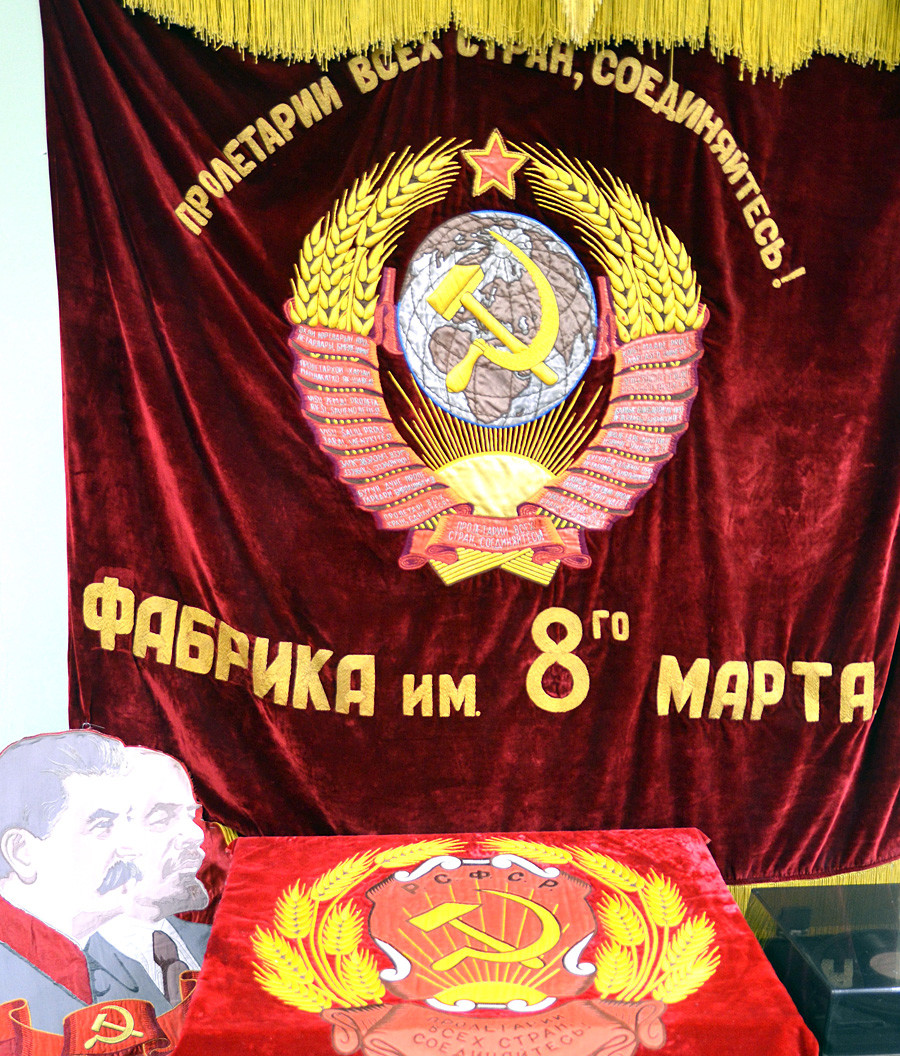 All pennants and banderols were embroidered in Torzhok.

The Torzhok goldwork factory fell on hard times following the collapse of the Soviet Union. Once it was almost sold off to foreign investors, but at the last minute Oleg Ivanov, a wealthy local purchased the factory it and saved this tradition in his hometown. The Novotorzhsky remain grateful to him for this today. 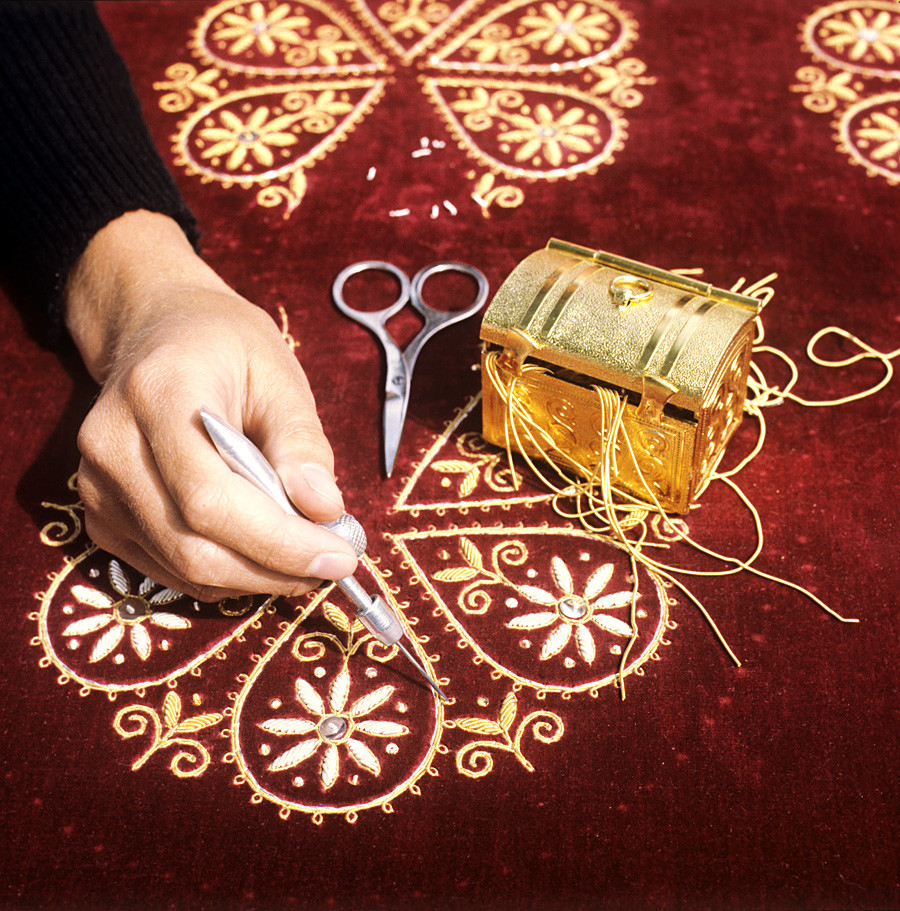 At the Torzhok goldwork factory.

In recent times, the reinvigorated Orthodox Church has become one of the factory’s biggest clients. The first produced after the factory reopened in 1992 were icons. The first was dedicated to Nicholas the Wonderworker, and Patriarch Alexius II blessed the entire factory.

Today around 300 women work in the factory. Although men are welcome as well, none have applied yet. Every year around fifteen girls studying the art of goldwork. Over two and a half years, they learn to distinguish about 100 sorts of gold threads and learn numerous ways of embroidering different patterns and templates. 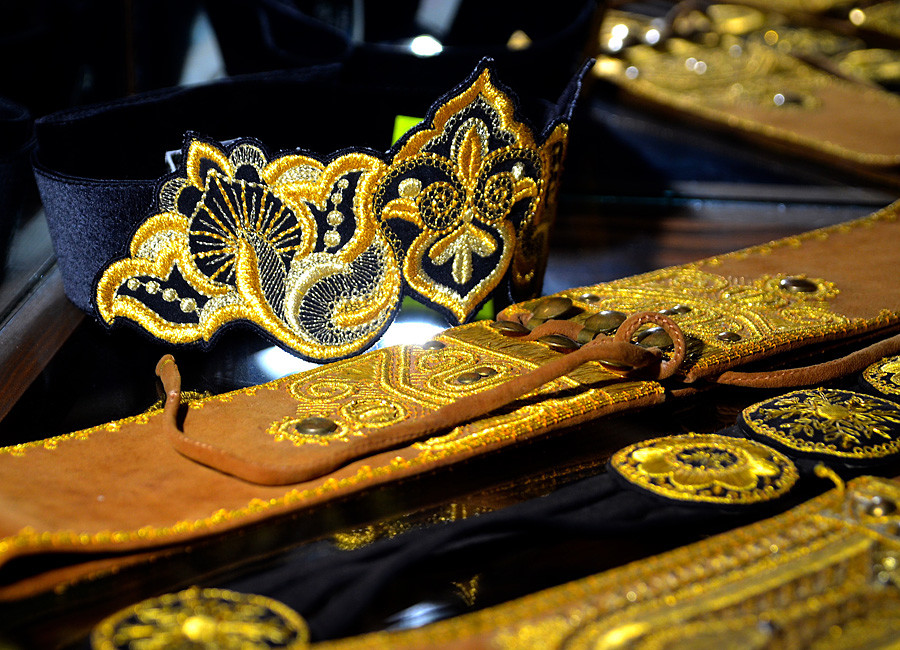 Masters produce works that are better than any sewing machine in the world.

Experienced masters produce works that are better than any sewing machine in the world. However, this takes a long time. It takes the best Torzhok embroiderers a year or more to make just one of the pictures that decorate the offices of high-ranking Russian politicians and organizations, such as the Moscow Kremlin or the Peter and Paul Fortress in St. Petersburg.

It’s also worth visiting the “House of the Belt” to learn about the role the belt played in old Russian culture and the strict rules that governed wearing them. Also, take a look at the longest belt in the world (12 meters). Just remember to put on your seatbelt to stay safe for the rest of your trip through Russia!

The Torzhok embroiderers teach goldwork workshops for tourists—and not just kids! Don‘t miss to chance to embroider your own golden initial!

Getting there and around

Torzhok Goldwork Embroidery Factory, including the store and museum

By train: to Tver, then by regional train to Torzhok

From Tver: take a mini-bus (1 hour, 150 rubles) from the train station. Ask to stop next to the “Zolotoshveya” museum.