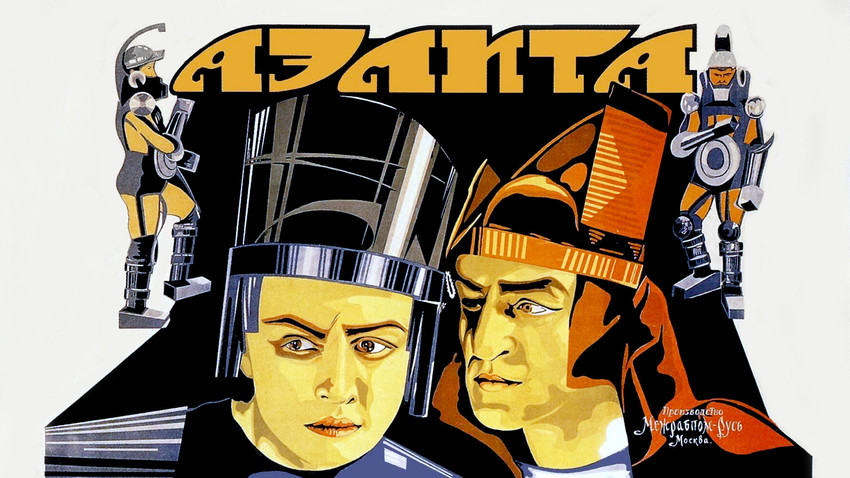 Public domain
Did you know that some Hollywood moviemakers found inspiration in the works of Soviet directors? Yep, here are some of them, plus other prominent science fiction films that every space lover should watch.

This Soviet silent film based on Alexey Tolstoy’s novel is considered a classic of world cinematography. It is particularly important because it features early science fiction elements telling the story of an engineer who builds a spaceship and travels to Mars. There he encounters an alien civilization, plots a Socialist revolution, and falls in love with the daughter of the Martian leader – Aelita. Quite a drama!

This film by Soviet moviemaking genius Pavel Klushantsev, who George Lucas himself called the “Godfather of Star Wars,” was a breakthrough in the sci-fi genre. Here Klushantsev for the very first time showed a satellite launch (in the same year as Sputnik), the first manned spaceflight (four years before it actually happened), and the first hypothetical flight to the Moon. The special effects used in the film were exceptional and inspired not only Lucas but other American movie directors like Stanley Kubrik to create his 2001: A Space Odyssey.

Another film by Klushantsev that was remarkable for its time and influenced Hollywood directors for many years to come. It tells a story of a joint Soviet-American expedition to Venus, but one of the three spaceships gets destroyed by a meteorite. While waiting for a new ship to arrive, the crew decides to land on a nearby planet which turns out to be inhabited by dinosaur-like animals. It was only a few decades later that Jurassic Park came out in Hollywood!

There were many things invented by Klushantsev that were later used by American moviemakers. For instance, an antigravity traction machine first appears in Planet of Storms, and similar contraptions were later seen in the Star Wars and Back to the Future series. Plus, the robot in Planet of Storms – a crew member and friend ­– is rather reminiscent of R2D2 and C3PO.

The story takes place in some distant communist future when a ship called Tantra comes across an unknown Iron Star (Death Star? Hmm) that traps the spaceship with its powerful gravitational force. Running low on fuel, the crew risk landing on one of the nearby planets. There the earthlings meet other forms of life that turn out to be quite aggressive and dangerous. An interesting note: the main character’s name is Dar Veter – sounds familiar? There is a popular belief that George Lucas named his Darth Vader after the Soviet hero because of the Cold War.

This well-known classic by Andrey Tarkovsky based on the novel by Stanislav Lem is not really about space exploration, but rather about the exploration of a human inner world. The story revolves around a space station called Solaris that studies a planet of the same name and its living ocean that can materialize the most painful human memories. Such material introspection becomes unbearable, driving the station crew to madness.

This sequel to the teenage film Moscow-Cassiopeia tells about an interstellar expedition to the planet Alpha Cassiopeia, taken over by robots. The expedition strives to help the local aborigines, or what’s left of them, after the robots’ colonization that aimed to make humans happy by removing all emotions from them, in essence turning them into robot-like living beings. The Soviet (and human) Young Pioneers do their best to rescue the situation.

A female alien Niya gets saved by a human crew from her destroyed spaceship. She has non-human powers and learns to survive on Earth with the family of a Russian scientist. Suffering from amnesia, she hears about the dying planet Dessa, which she feels is her home. She decides to go there, but nothing turns out easy. The alien girl and her planet-saving mission recall to mind The Fifth Element.

An energy anomaly is spotted in the Solar System posing a threat to Earth. A phenomenon called Orion’s Loop has a strange effect on humans, but as the space mission sent to study it later finds out – it’s not the main issue.  During the mission, the crew comes face-to-face with aliens in the form of holograms trying to warn humans about a bigger problem. The holograms used in the film look quite similar to ones that appear in the Star Wars saga.

Based on the children’s novel Alice’s Travel, this animated film is considered a cult classic among Russians. An expedition from the Earth explores other planets to find new animals for the Moscow Zoo. The crew, which features a small girl, encounters many strange living beings and resolves their enemies’ intrigues.

Truly a classic of Russian cinematography and a landmark sci-fi and black comedy movie directed by Georgiy Daneliya, this is a genuine must-watch. It tells the story of two Russians who accidentally end up on a foreign planet called Pluke, and struggle to find their way home. Their adventure is full of meetings with strange representatives of the planet that possess telepathic powers, speak weird languages, and have surprising societal norms. What’s more, the aliens look like humans but wear tiny bells on the nose – very entertaining!

These short animated films tell about a human expedition to a faraway planet called Geona. The overall climate conditions there are quite favorable for humans, but dangerous vampires that inhabit the planet pose a serious obstacle for prospective colonization. The vampires look more like pterodactyls, and the main characters strongly resemble the famous American actors Arnold Schwarzenegger,  Sylvester Stallone and Chuck Norris, who even speak Russian with an American accent!