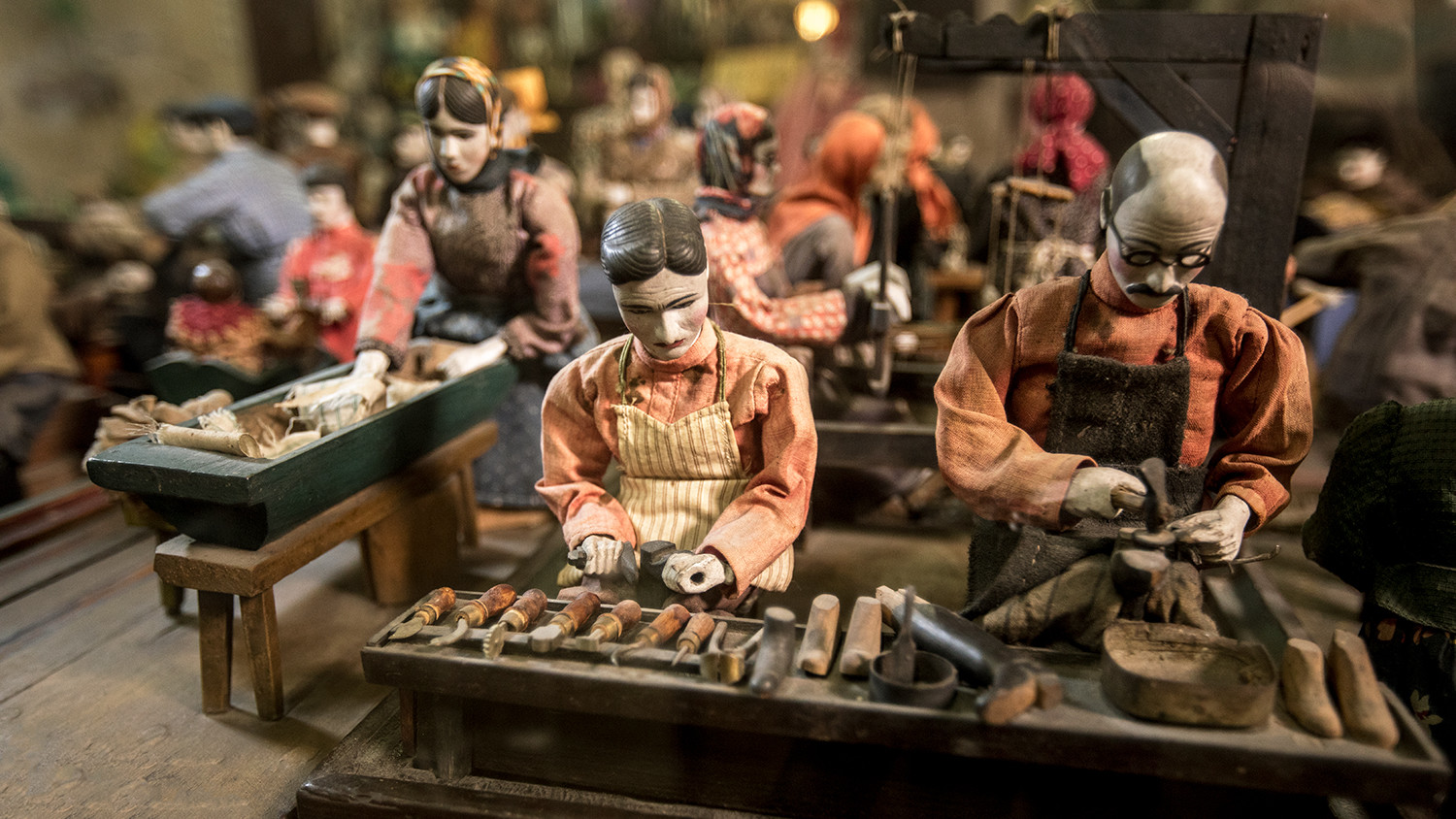 Egor Kochurov
Can you imagine a Bruegel painting coming alive, with all its tiny characters starting to move according to individual scripts? A century ago, an illiterate Russian craftsman managed to do something very much like this.

The old Russian city of Ulyanovsk (870 km east of Moscow) is best known as the birthplace of Bolshevik leader Vladimir Lenin, but now it's home to an amazing mechanical puppet theater. Imagine a large table that houses an entire peasant community - 49 small figures, each is going about its own business. One is washing clothes, another is sawing, and yet another one is cooking - and all of them are moving at the same time.

One day in the life of a village

This huge multi-piece toy is kept in the museum of the local puppet theater. It was made by an illiterate but very talented peasant, Alexey Morozov, in the early 20th century, roughly 1905-1912. The exact date is not known because the craftsman kept making changes to his creation, which depicts one day in the life of a Russian village before the 1917 Russian Revolution.

The mechanism is the same as in a barrel organ. Previously, the operator had to turn the crank, whereas now the puppets are set in motion by an electric motor. Each puppet has its own drive, which is connected to the other figures. The whole thing is made so skillfully that you can see every minute movement and detail.

One woman is sifting flour, and others are chopping cabbage for the winter; their braids are made from natural hair. At the other end of the table, a mother is washing the laundry in a trough, while her daughter is wheeling around a younger child in a stroller.

to the men are busy building something: a carpenter is hitting a chisel with his hammer and is pushing aside chips of wood with a movement of his hand.

Shoemakers make shoes: they have tiny, two-centimeter-long tools in their hands, and millimeter-long studs. The tools are miniature replicas of real instruments.

In the center, a girl spins the yarn, licking her finger to smooth the thread. to a weaver is driving the dobby of her loom, adjusting its height with her small feet.

Men are splitting a log: one is holding an ax, while another is helping, wearily holding a cigarette to his lips and looking at the audience. It seems that the log is about to give in, but it has been holding together for a century.

Here is a family gathered for dinner. The first spoon goes to the father, only then the rest can eat. Here are his wife and children, and his mother with a web of wrinkles on her forehead, who is feeding the youngest child. She is bringing a spoon to the child's mouth, who then takes the food, turns his head, and spits out the porridge, same as many modern children would do today.

They say that in this miniature Morozov depicted himself and his own family. This is the only chance to get an idea of what he looked like. There are no drawings or photos of him. All we know is that he was born around 1867 in the town of Shadrinsk in the Urals, and every spring he traveled throughout Russia with his puppet theater to give performances at fairs. He called his collection of puppets "living wood". For each scene he had comic verses, which were very popular with children.

Morozov was a famous craftsman during his lifetime, and the museum director, Irina Maysakova, says there are mentions of his mechanical puppets in the archives. In 1923, Morozov showed his collection at the first Kustprom exhibition (the precursor of the VDNKh and received a diploma and a gold medal for his efforts.

His children found the documents for the medal but not the medal itself. Most likely it had to be exchanged for food in the difficult war years. believes it was probably for that exhibition that some other compositions were made: “One day on the collective farm board;” “One day in a prosperous peasant family;” and “One evening in a country club.”

She says: “In the archives, there are only drawings that show what it all may have looked like." The compositions themselves may be in private collections abroad, but there are no documents to prove it.

After the exhibition, Morozov conceived a new composition, but in 1934 he and his family moved to Mayna, a suburb of Ulyanovsk, where he died two years later. He was buried there in the village cemetery, but his grave was never found. His great-great-grandchildren still live in Ulyanovsk.

The museum has another collection that his younger son Vasily completed in 1947, after returning from the front. It depicts a carpentry and metal workshop, and masters are teaching apprentices how to operate lathes. One is patting an apprentice on the shoulder with such gusto that the fabric of the other's tunic has been worn out by the touch.

Vasily could have become a very talented craftsman and followed in his father’s footsteps, but due to severe injuries (he lost both legs on the front) he died the same year. This collection was presented to the former head of the museum by his children, but the first one appeared at the museum, one might say, by chance.

In the 1960s, Morozov's children found a chest with puppets in the old house, and the theater bought the entire collection from them for quite a lot of money, 500 rubles (four times the average worker's wage at the time). Now the collection is priceless, and many museums would like to buy it.

The puppets were in perfect condition, but disassembled, and there were more figures than remain today. They say there used to be girls eating sunflower seeds, and a second tractor, but it is unclear where they are now. Everything was assembled according to primitive drawings, which were also found in the chest.

“In 1980, we tried to take the collection to Moscow to VDNKh, but something broke on the way, and in the collection had to be repaired a second time," says .

Today, the collection is overseen by two engineers, who say that the main thing is not to move anything. A couple of years ago, the museum moved from the second to the first floor, and something must have got skewed during the move because some fragments now move not as originally intended.

“For example, this girl on the field - her shoe doesn’t reach the rake when she taps on it. And our engineers are unable to fix this,” says

e, the puppets have been unscathed by the passage of time. One century later, everything works and even the costumes and colors on their faces have not faded. Maybe they're really alive?

“Once I was in the workshop and I heard the hammer knock, but I knew for sure that the collection was turned off. Still, the hammer was knocking,” the museum director recalls. “One of Morozov's sons was at work. How can you explain it?"