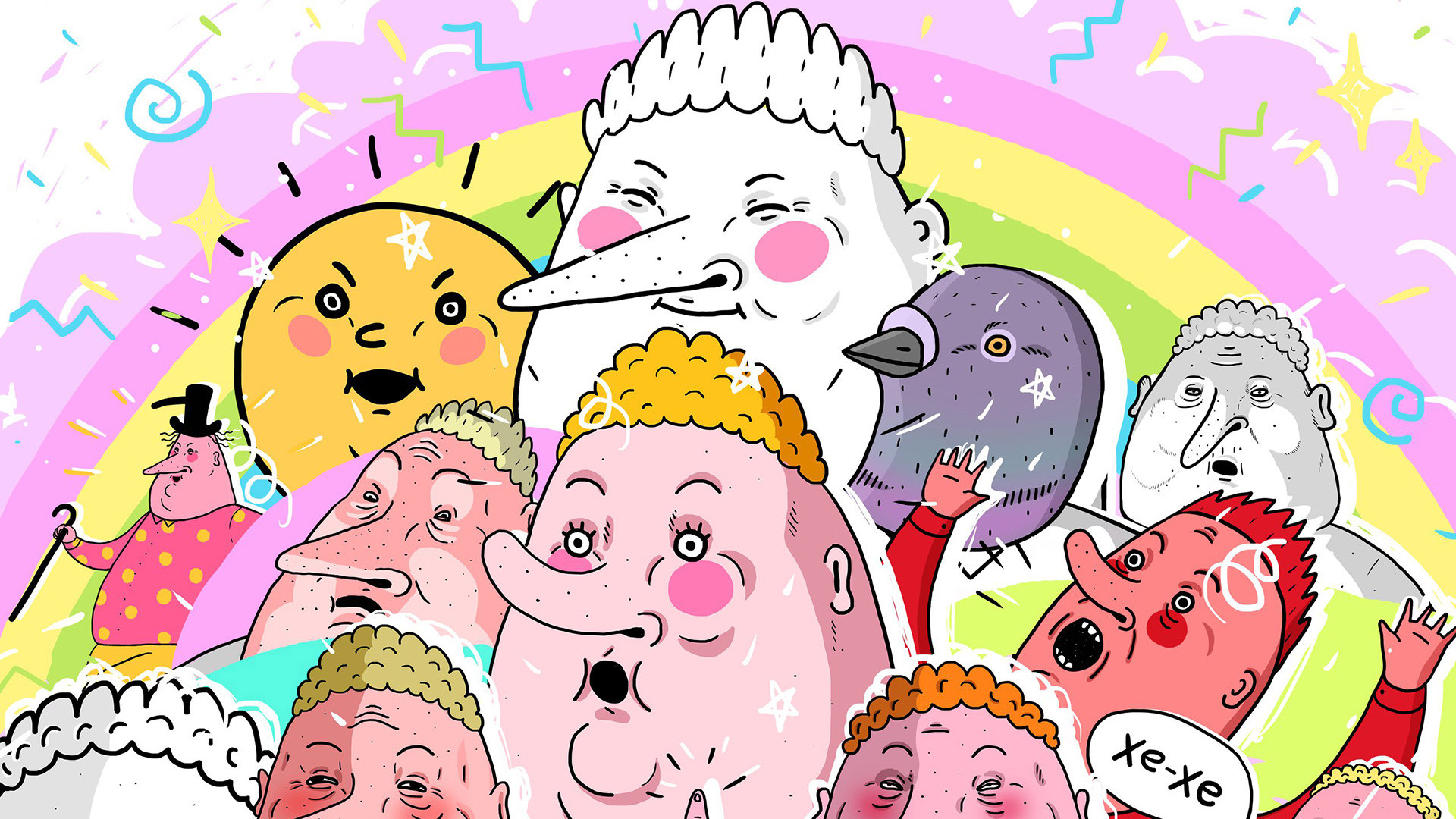 Existence is burden and bosses are a pain in the ass but every week has its Friday!

SKYA (ШКЯ)
Her characters are fat, ugly and pathetic (like every office worker, naturally) but you can’t help but love them... and relate to them.

Eva Morozova, a young artist from Novosibirsk (the 3rd biggest city in Russia, 3300 km east of Moscow) draws funny pictures explaining the everyday life with humor and sarcasm since 2013. It’s peculiar - most of her characters are fat, big-nosed sad people (even cats look like this). But they are hilarious.

“These are small jokes on everyday life, very simple. I draw everything that comes to my mind and seems to be funny”, Morozova shrugs in an interview. “The style is caricature and minimalistic, I liked drawing ugly fatsos since my school years. In fact, every picture has its mood: some are sad, some are depressive, prankish, psychedelic, you name it.”

Here are some of the best (the choice was tough). So, everyone has to go to work every darn day... 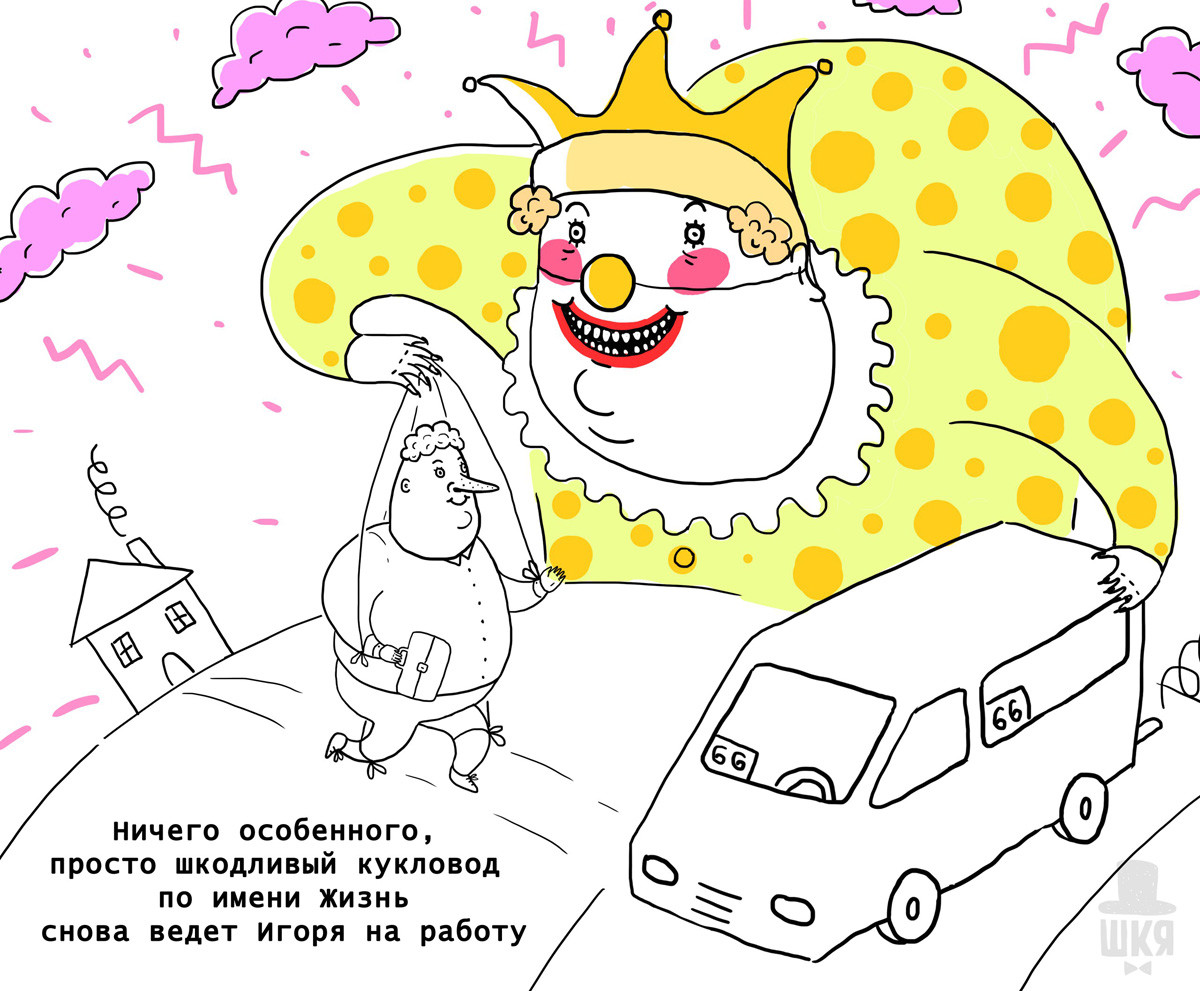 “Nothing much to see here, just a playful puppet master called Life guiding Igor to work once again”

But nobody wants to work, of course! 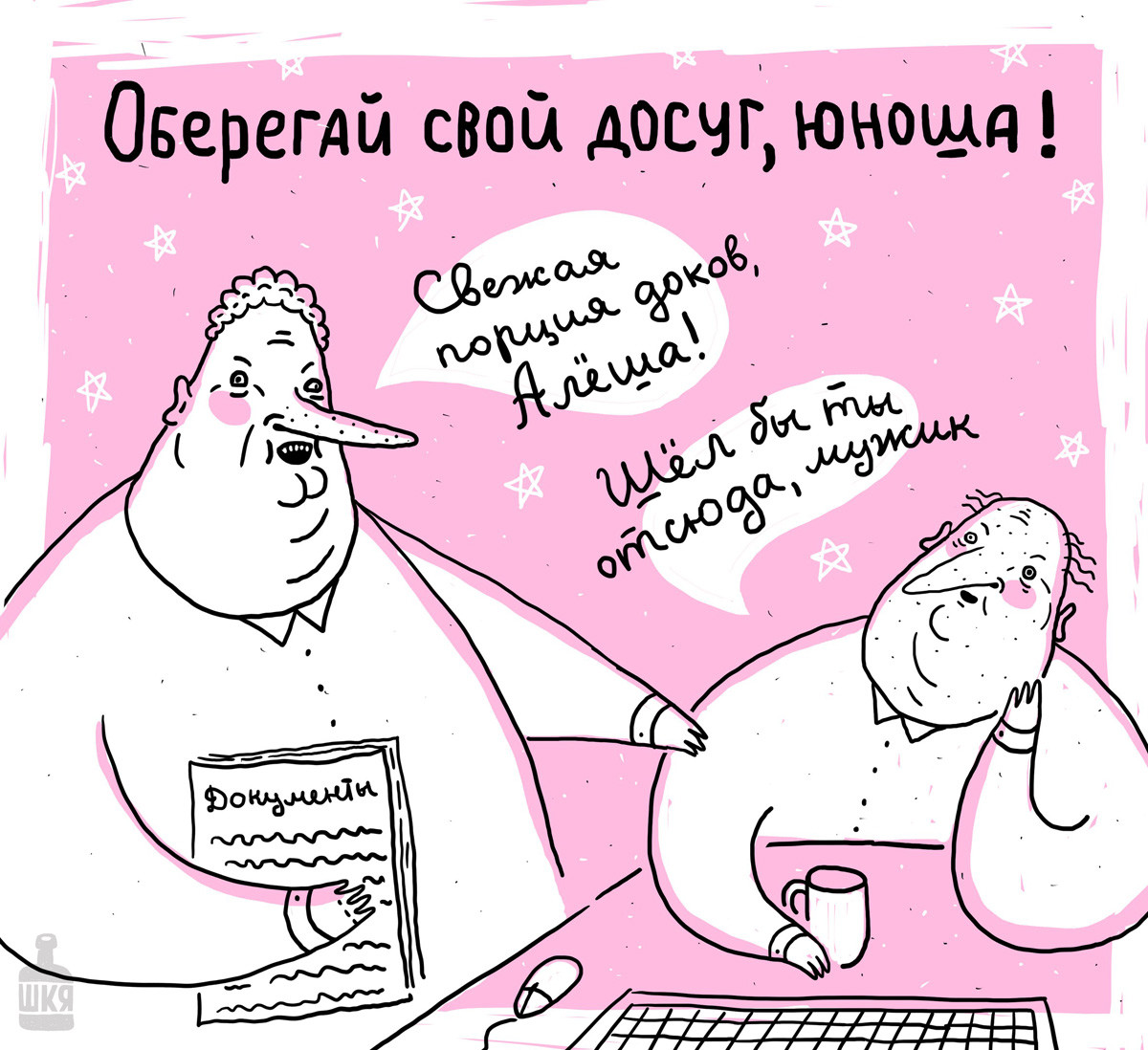 Boss: Here is a new pack of documents for you, Alyosha!
Alyosha: Oh, man, please, screw you... ”

Everyone just waits for Friday, when the real magic happens! 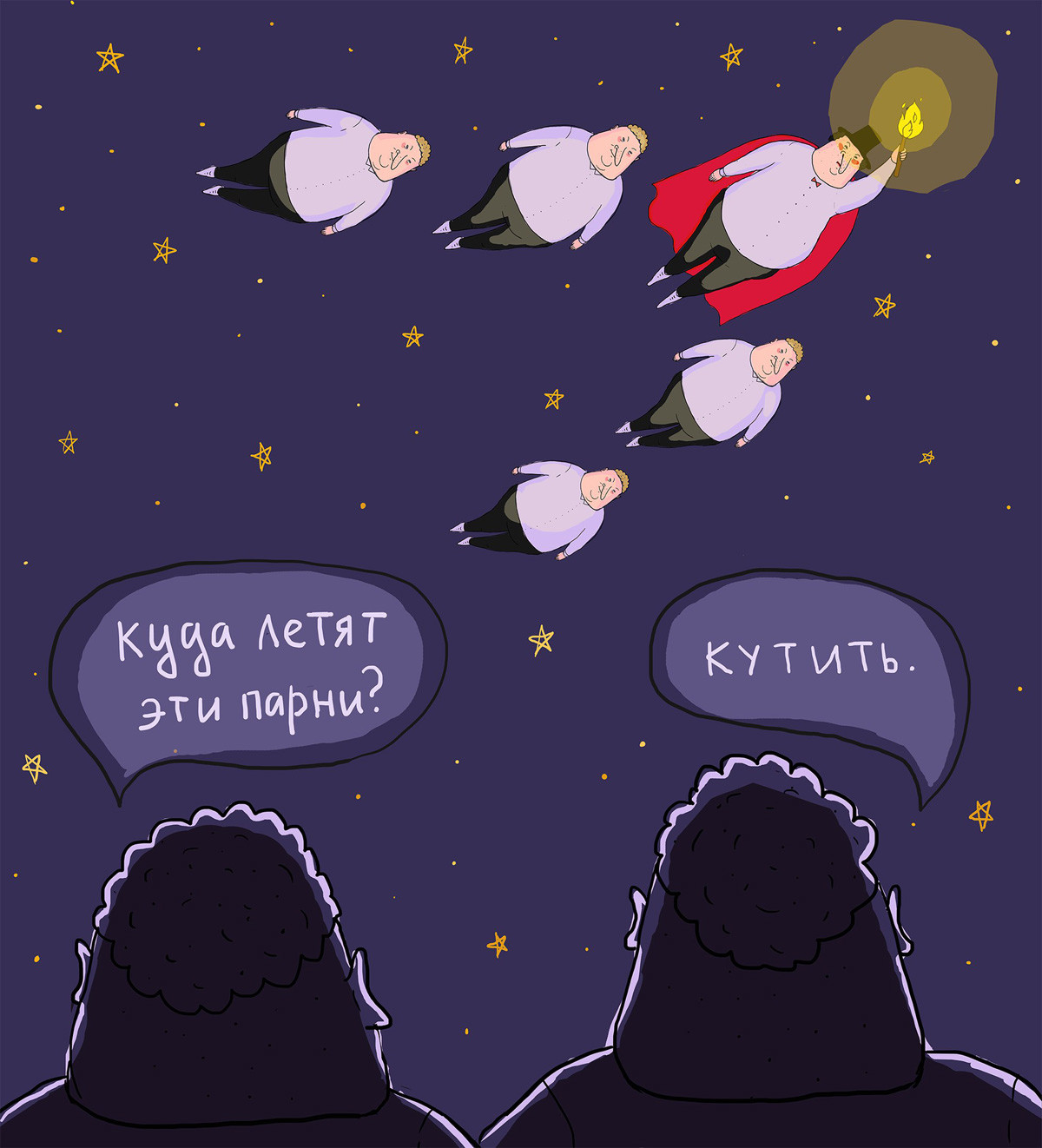 “Where are these guys flying off to?
They’re off to carouse.”

On Fridays, we meet our good old buddies... 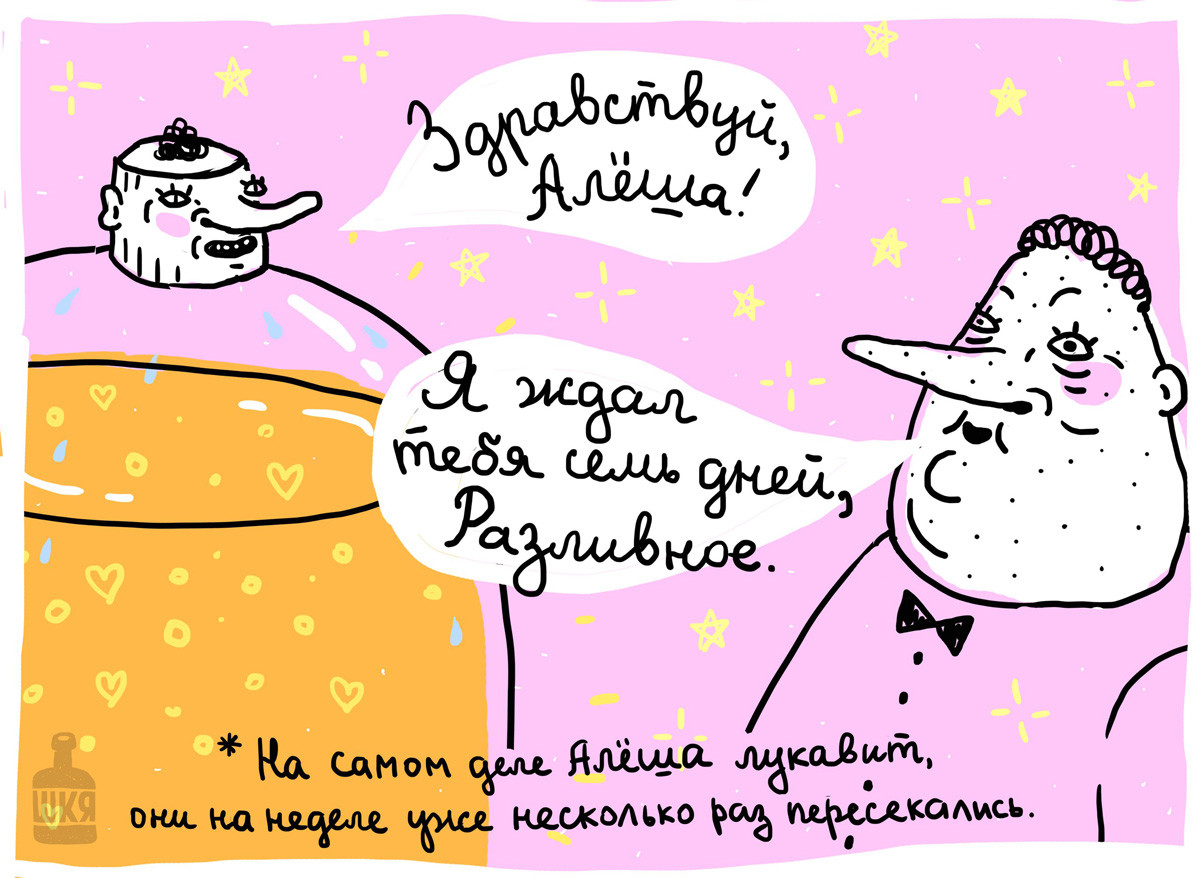 “Draft Beer: Hello, Alyosha!
Alyosha: I’ve been waiting for you all week, mister Draft Beer.
*In fact, Alyosha is not being 100% truthful: they already met during the week. Repeatedly”

Something important scientific facts about beer, too... 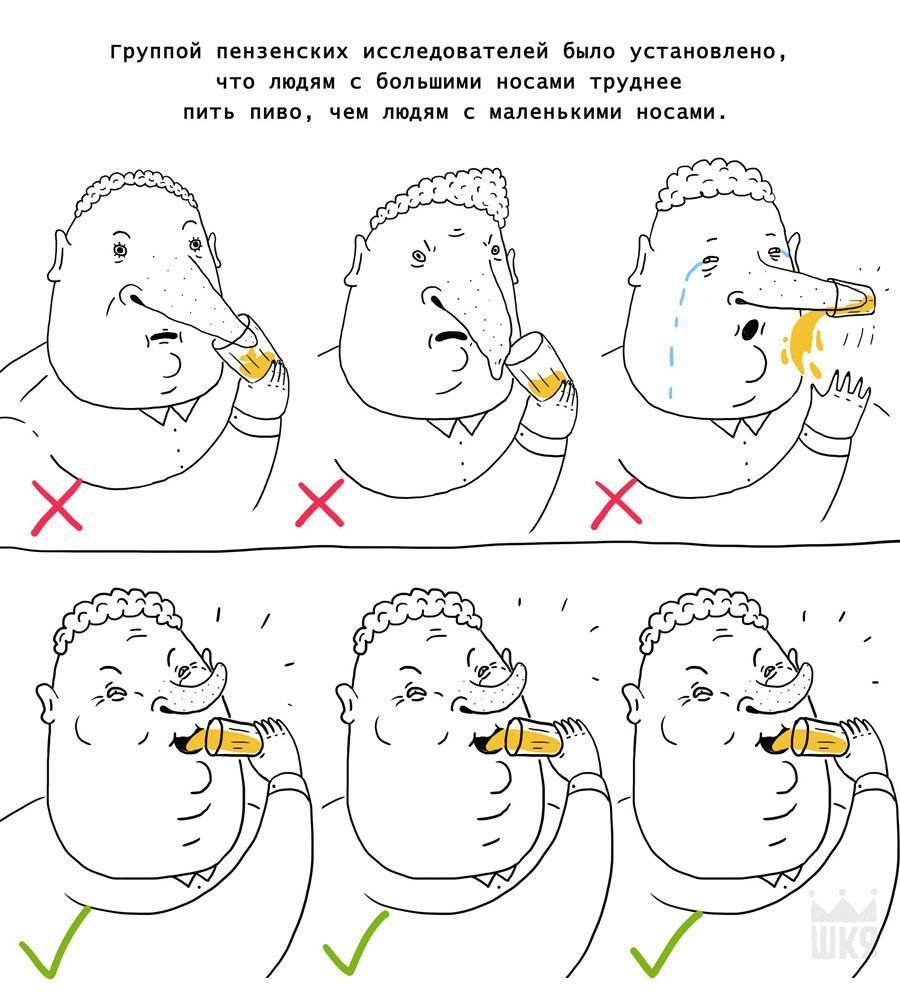 But then, work days come again, when you have to stay strong and confident (otherwise, you face the risk of actually working). 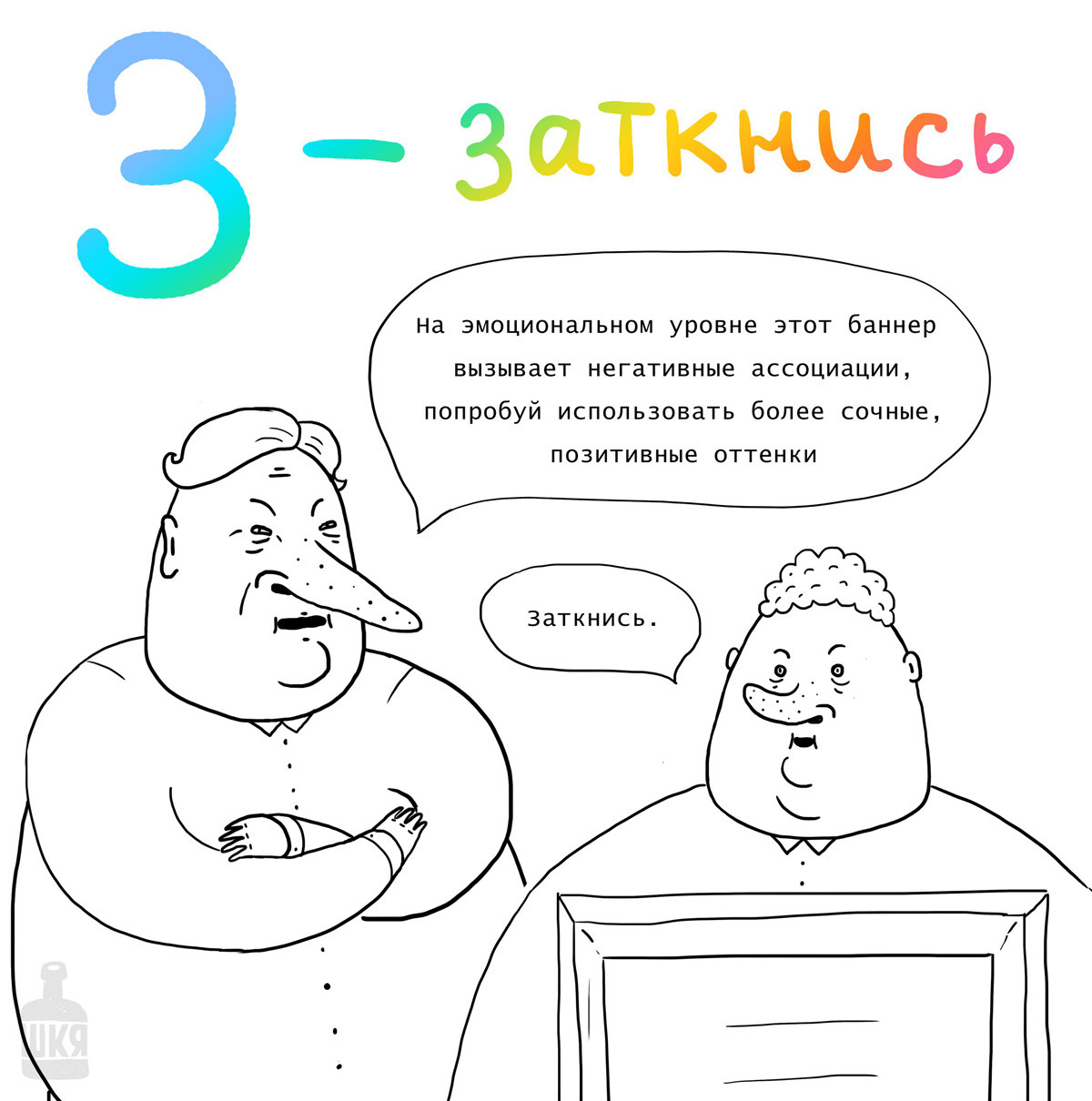 And then, weekend again, with all its pleasures. It’s a circle of life. 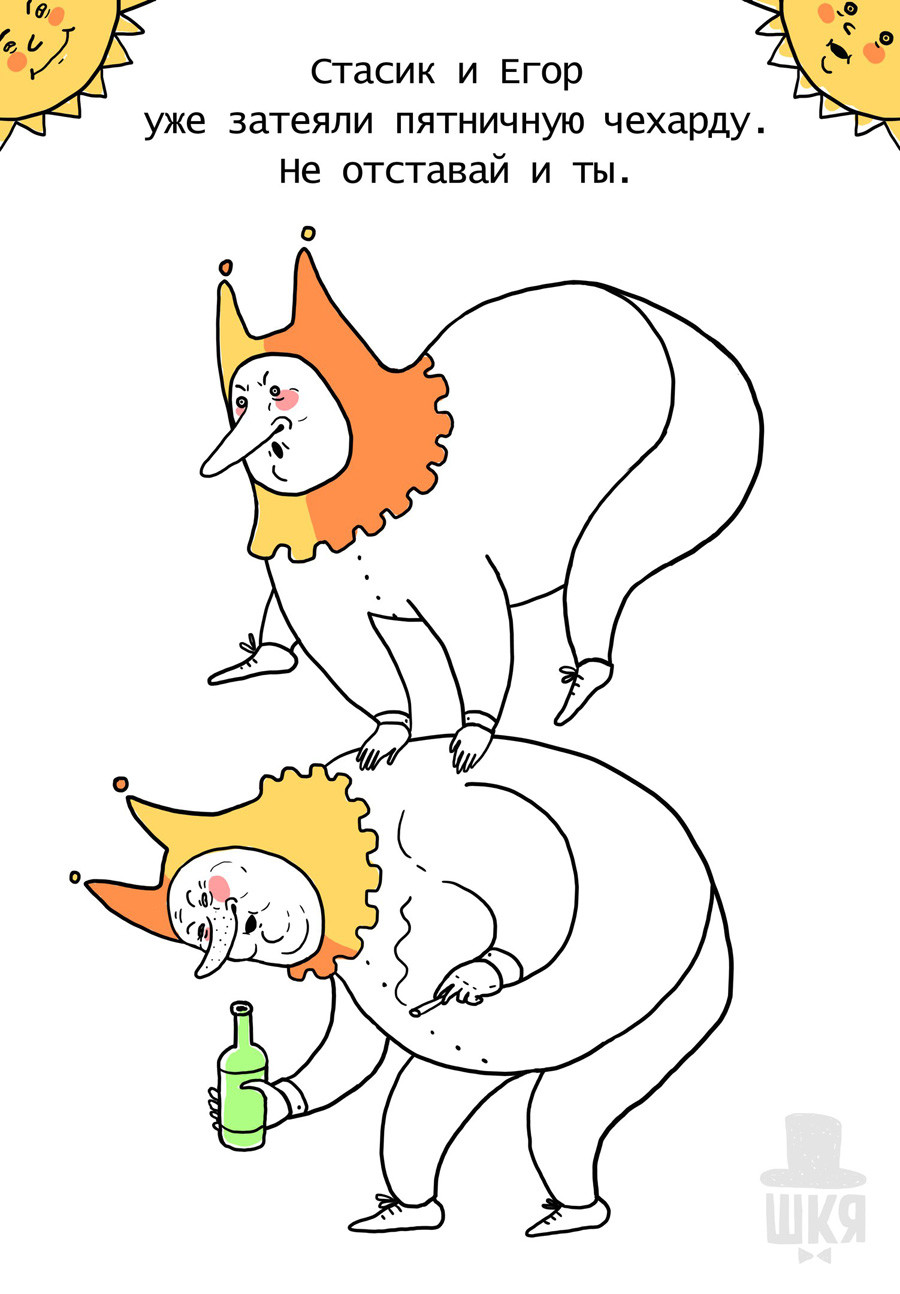 “Stasik and Yegor have already started their Friday leapfrog. Follow them!”

And you can’t escape it. 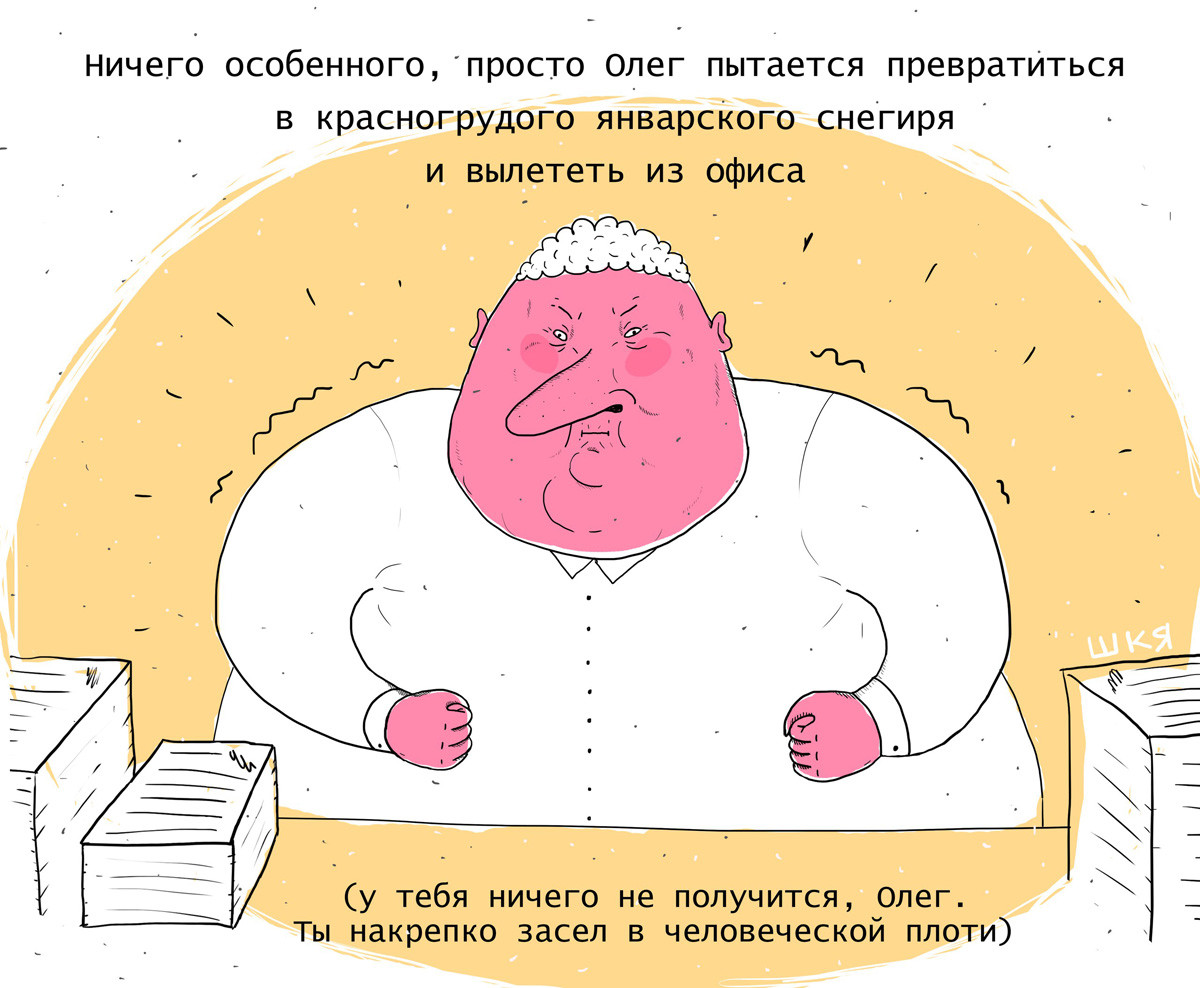 “Nothing special, just Oleg trying to transform into a red-chest bullfinch and fly away from the office.

(You have no chance, Oleg, you’re deeply stuck in this flesh prison)” 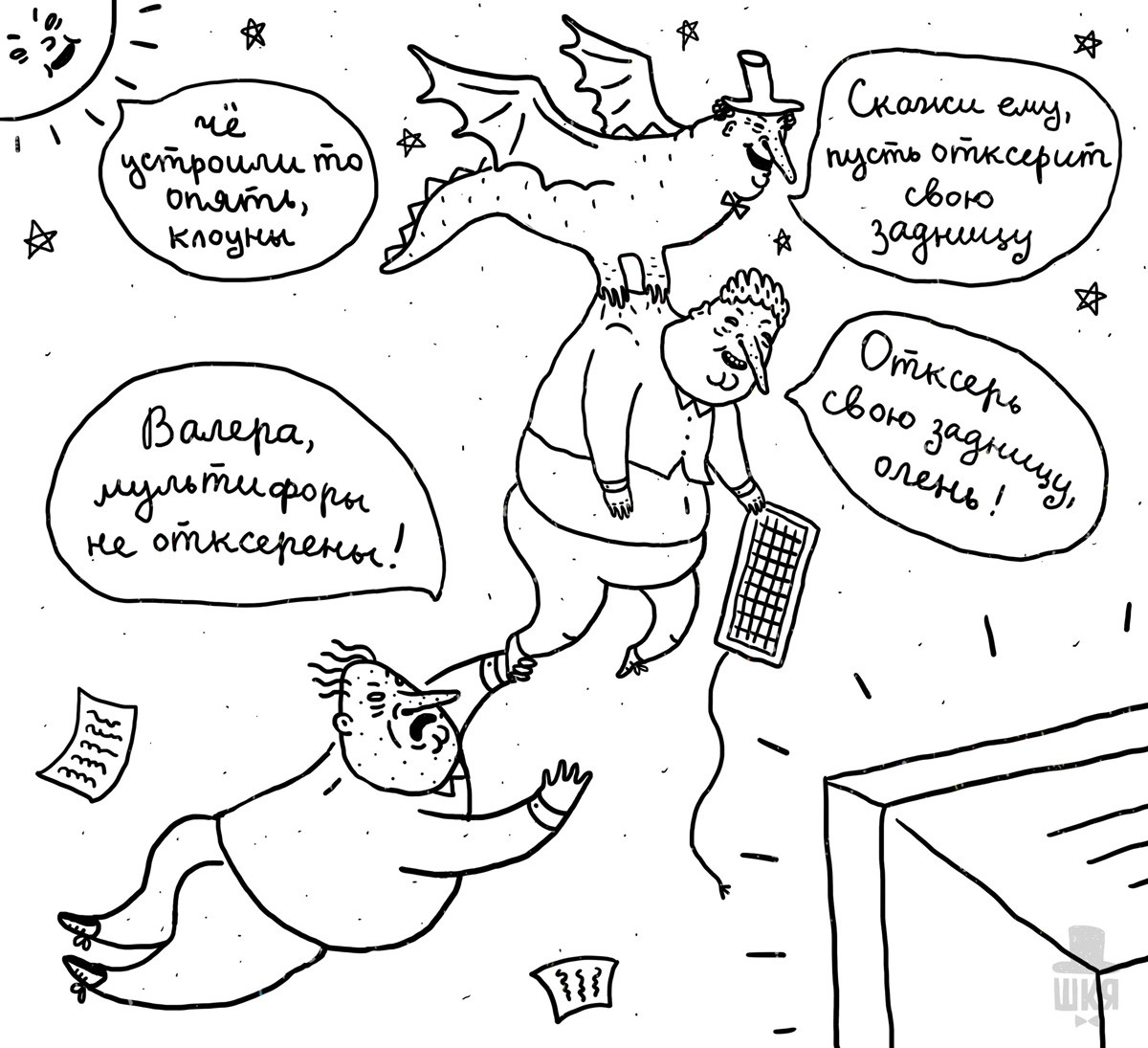 “Boss: Valera, you forgot to xerox the documents!
Dragon: Tell him to his butt.
Valera: Xerox your butt, you !
Sun: What are you doing again, you clowns…”

But generally no, you can’t. Life seems miserable and even your cat despises you. 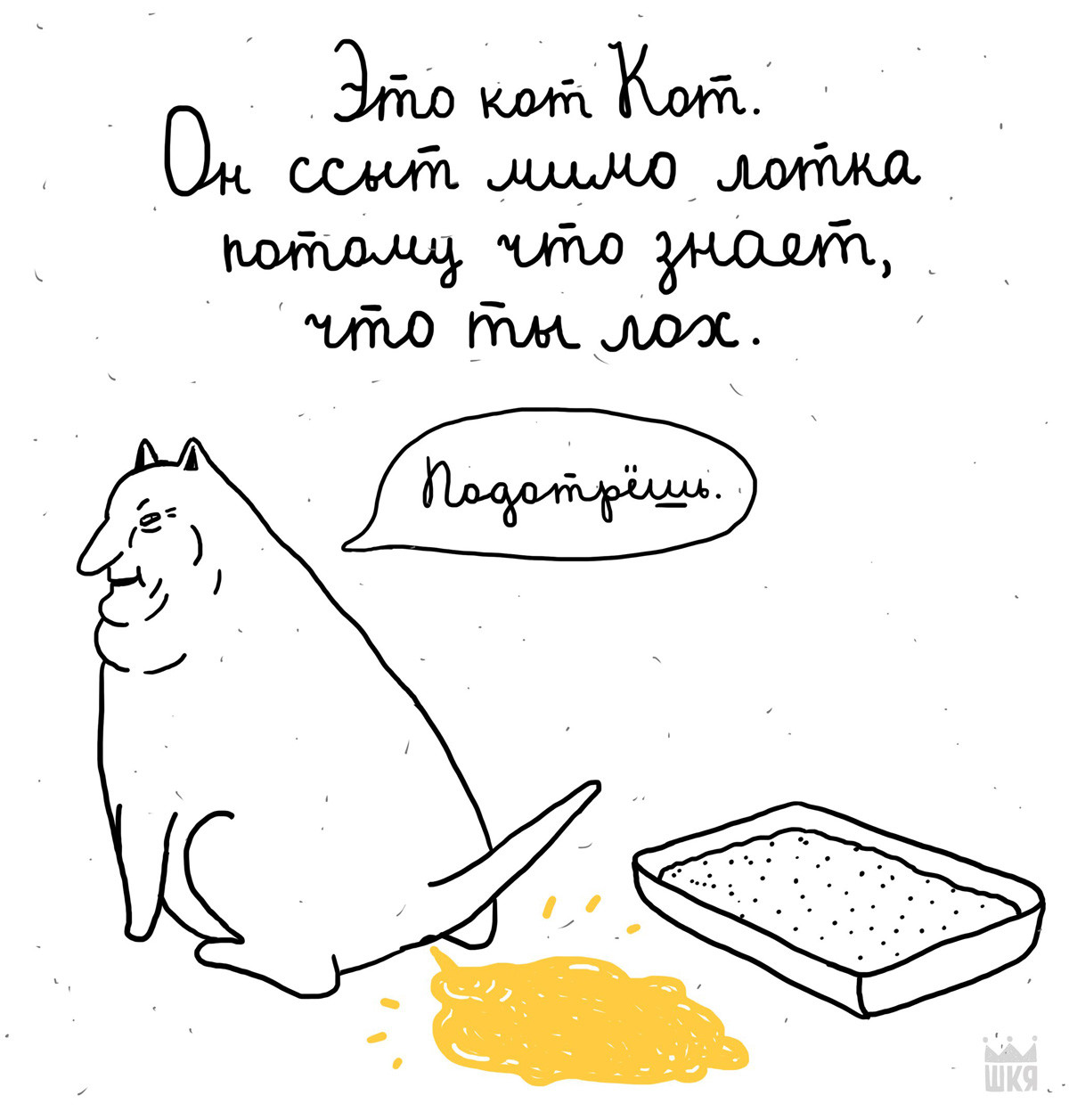 “This is a cat named Cat. He intentionally misses the kitty litter because he knows you’re a sucker.

And you’re getting old, you know. 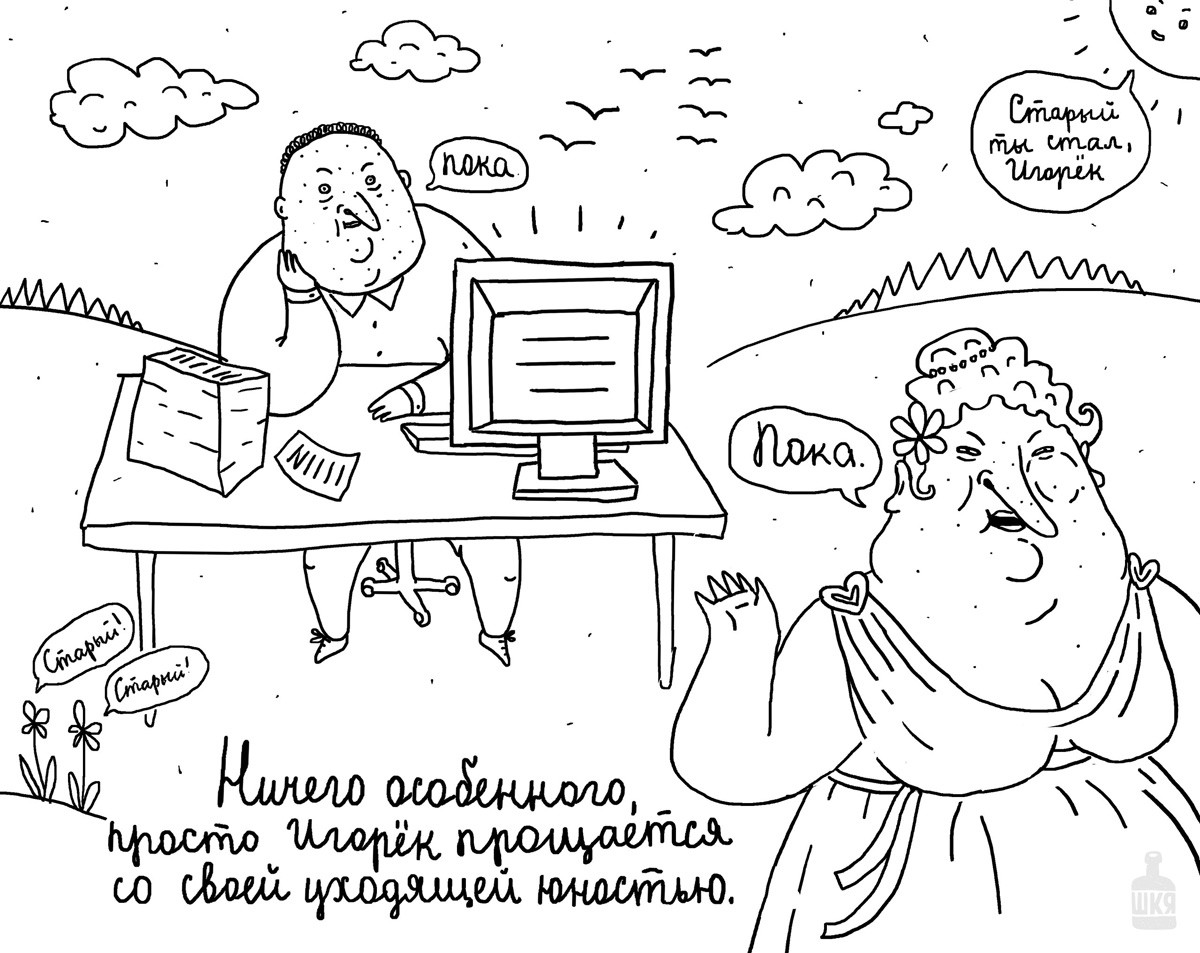 But one has to hold on to one’s dignity! 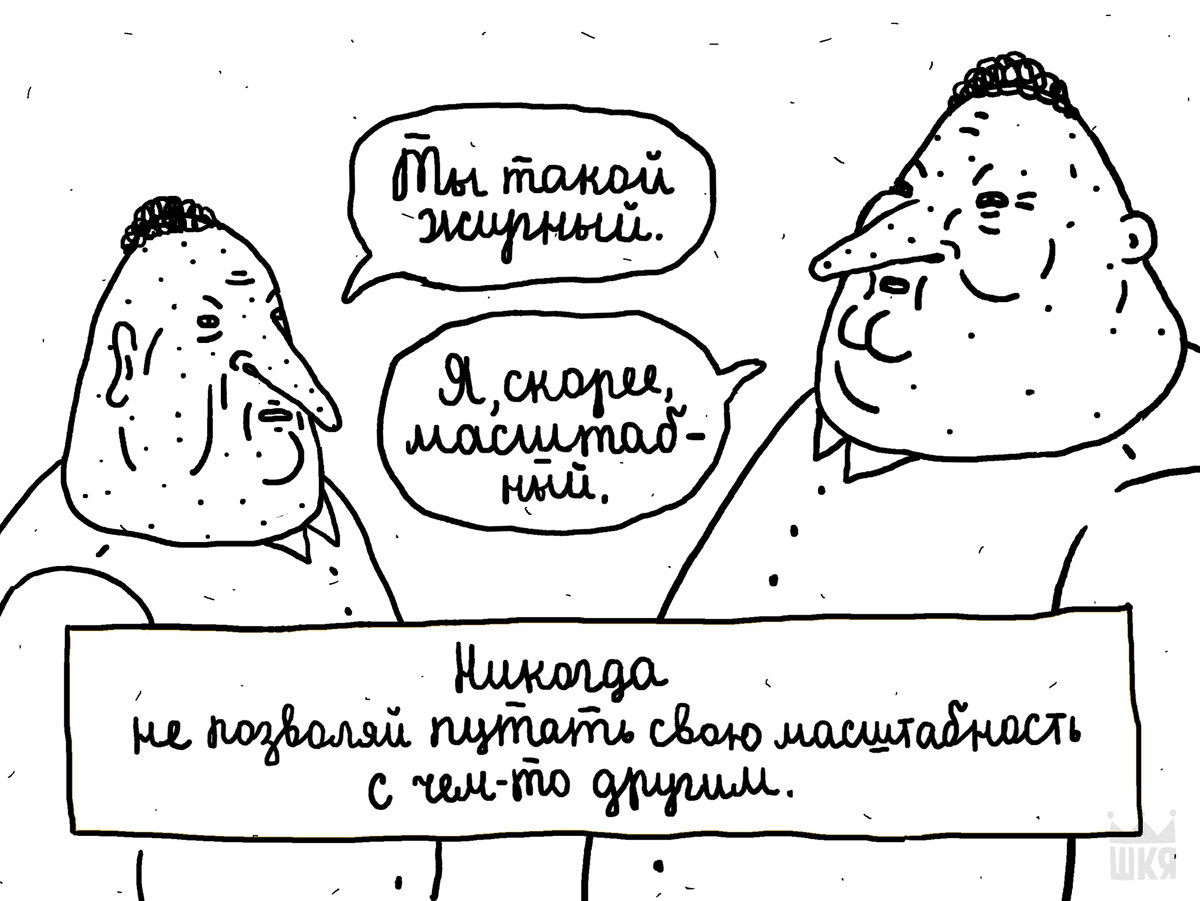 “Man on the left: You’re so fat.
Man on the right: I consider myself more of a king-sized person.
Signature: Never let anyone confuse your king-sizedness with something else.” 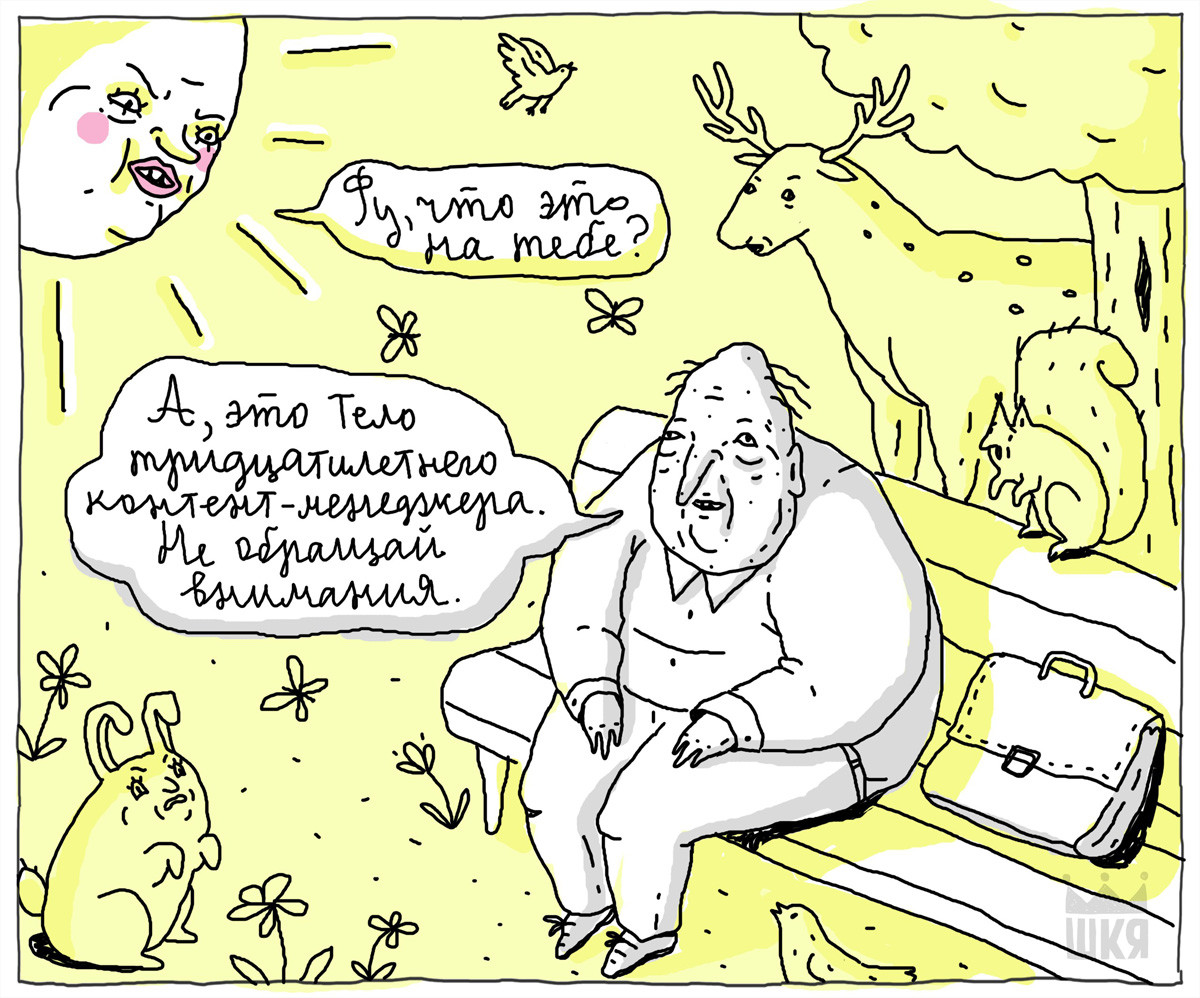 “The sun: My god, what are you wearing?
Man: Oh, just a body of a 30-year-old content manager. Never mind.”

Well, what can we do? Life goes on, and it’s already winter! 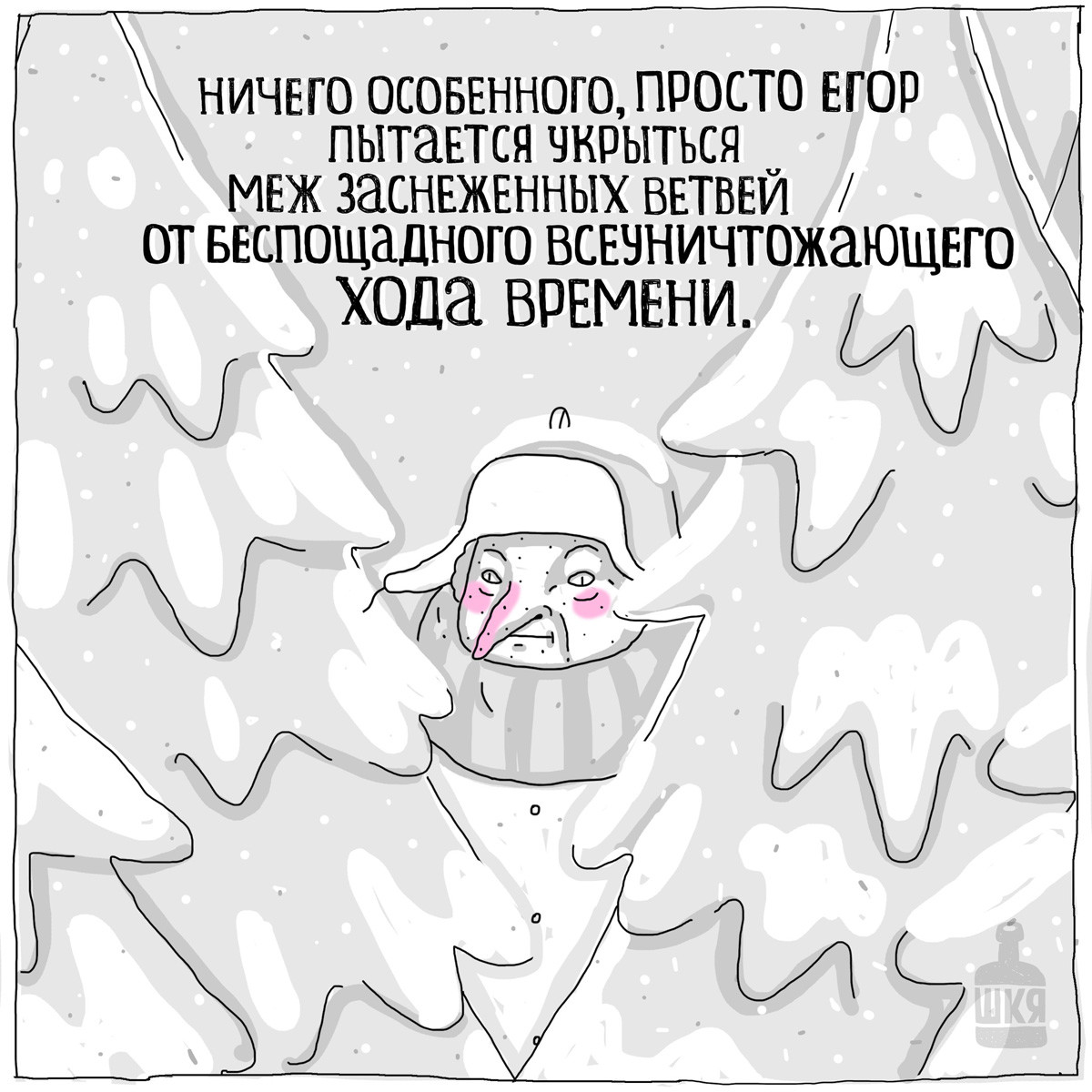 “Nothing special, just Yegor trying to hide from the ruthless withering of time behind some snow-covered tree branches.
(You have no chance, Yegor)”