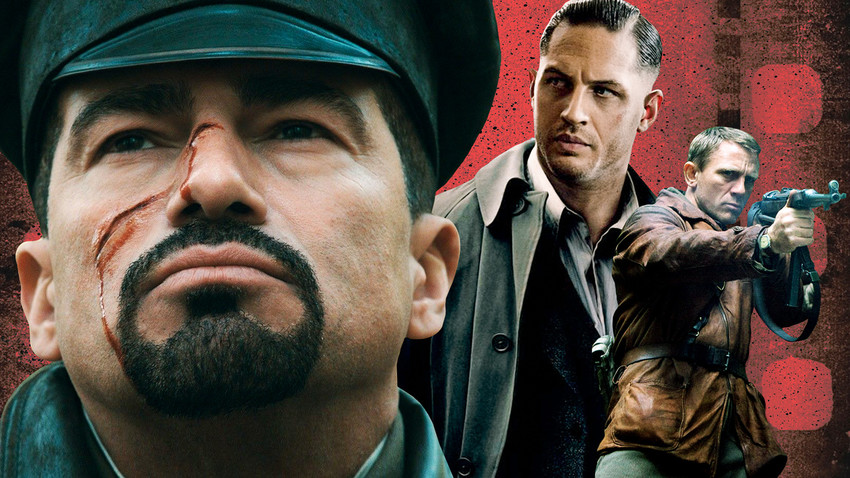 George Mendeluk/Roadside Attractions, 2017; Daniel Espinosa/Worldview Entertainment, 2015; Edward Zwick/Bedford Falls Productions, 2008
The demonizing of Soviet history by Hollywood has reached such a level that many people today have no doubts that the USSR was a true hell on earth.

Watching some Hollywood and British movies devoted to Russian (or Soviet) history, many Russians experience some true facepalm moments. The nonsense, absurd and lies they see on screen have forced them to come up with a special word to characterize how Westerners depict Russians in the movies: klyukvification from klyukva (literally “cranberry” but slang for “make-believe”). It measures the extent to which a movie about Russia has been stereotyped for foreign audiences.

We are glad to offer you our rating of American, Canadian and British movies on Soviet history, in which we rate them with cranberries, where one cranberry represents a reasonably accurate portrayal of Russian realities, and five means a total cock-and-bull story. 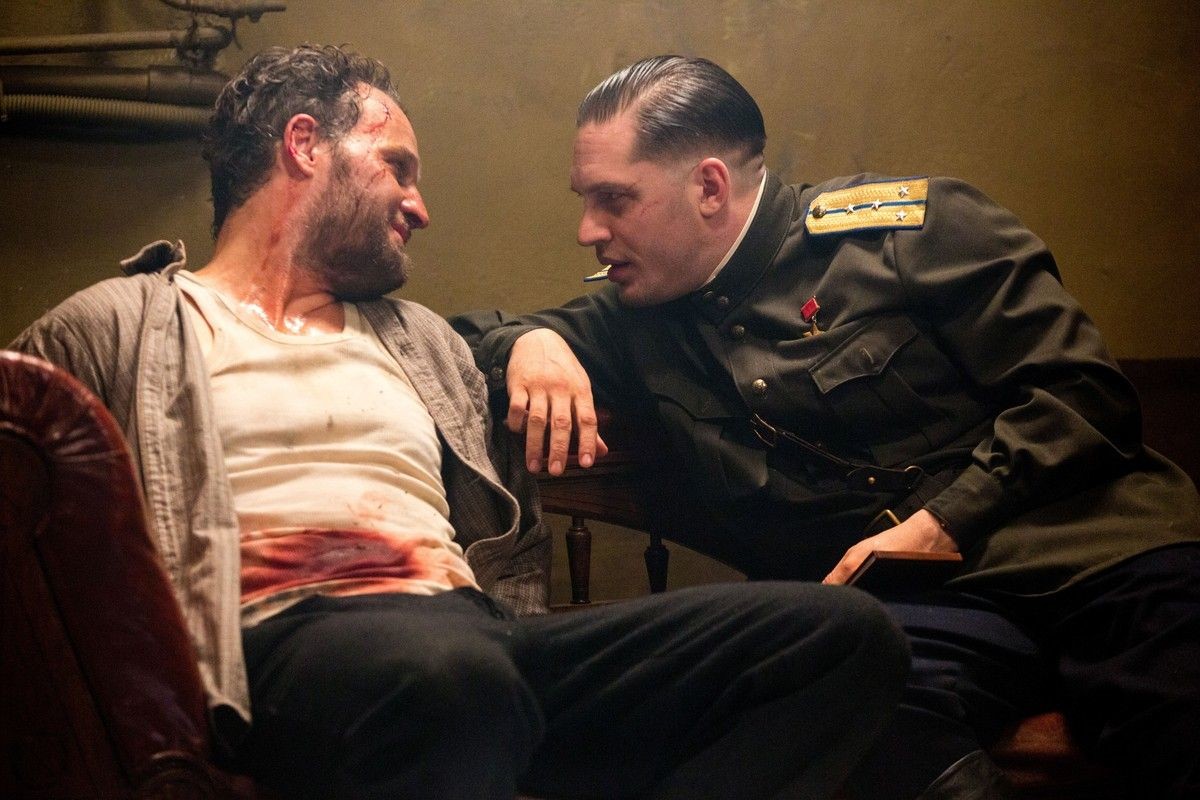 The setting is 1950s Soviet Union. Secret police agent Lev Demidov is searching for a maniac who has already killed over 40 children. Surprisingly, his own chiefs want to hush up the crimes, and the investigation is becoming dangerous for Lev himself.

The only positive moment about Child 44 is the cast, including Tom Hardy, Gary Oldman and Noomi Rapace, who amusingly tries to speak English with a Russian accent. As for everything else, the movie is a gloomy ride.

The peak of the Stalinist purges, which the Soviet Union suffered in 1937-1938, is transferred in the movie to the relatively quiet postwar 1950s and amplified to absurd proportions. The Stalin-era USSR wasn’t an ideal place, but Child 44’s creators turned it to a literal hell on earth.

Every Soviet person, as Child 44 tells us, is a potential victim of the bloody KGB (here in 1953 it is the MGB). Any second he or she might be taken from their home by the secret police and shot in the head without trial. It seems that in the movie’s universe half the population are police officers and their informers, while the other half are “enemies of the people.”

Innocent peasants are executed in courtyards (just as a warning to others), professors are beaten in university corridors with no punishment for the perpetrators, and even police officers themselves shoot each other with no fear of being court-martialed.

The cherry on the pie is the absurd reason why the Soviet security apparatus wants to hush up all the killings. “There are no murders in socialist paradise,” say the officers.

Child 44 is worthy of all five cranberries as a total fabrication, demonizing the Soviet Union to the max. 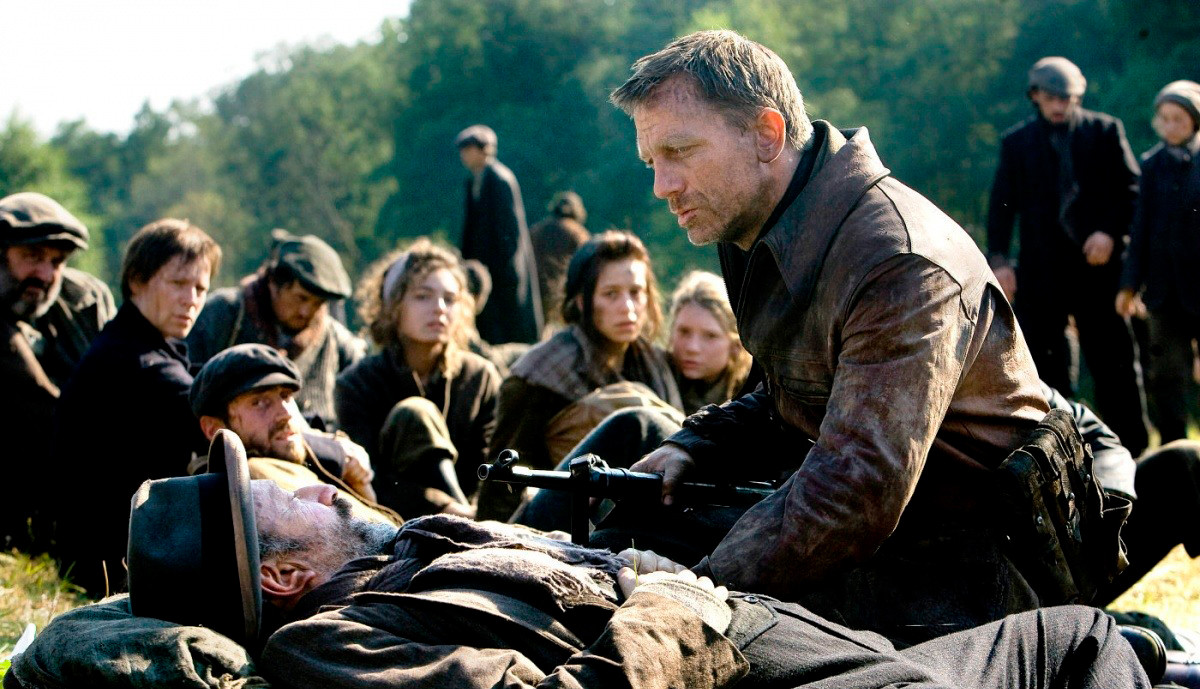 Based on true events, the movie tells the story of four Jewish Bielski brothers, who during the Holocaust are forced to hide in the forests of Nazi-occupied Soviet Belarus. There they organize a powerful partisan unit, which not only avenges the Germans, but also tries to save as many ordinary Jews as possible.

Defiance is probably the most plausible Hollywood movie on Soviet history ever. It accurately depicts details of peasant life in Belarus, weapons and uniforms. We see true depictions of German soldiers, partisans and even local Belarusian collaborators.

The remarkable moment is how respectfully the movie portrays the Soviet partisan unit, who are in contact with the Bielski fighters. The Soviets are not baby-eating demons, as they are usually shown. They are true patriots fiercely battling the enemy. In the evenings they drink, but do not turn into a frenzied horde, and remain sober enough to repel any possible attack. Some of them are anti-Semites, but this does not contradict the historical truth.

When the unit’s commander Viktor Panchenko retreats and leaves the Bielski fighters without support, he does not do so because he is pure evil or a Jew-hater, but because of tactical necessity. He regrets having to take the decision, but simply cannot act any other way.

Defiance gets one cranberry as one of the best examples of how Soviet history should be shown in cinema. 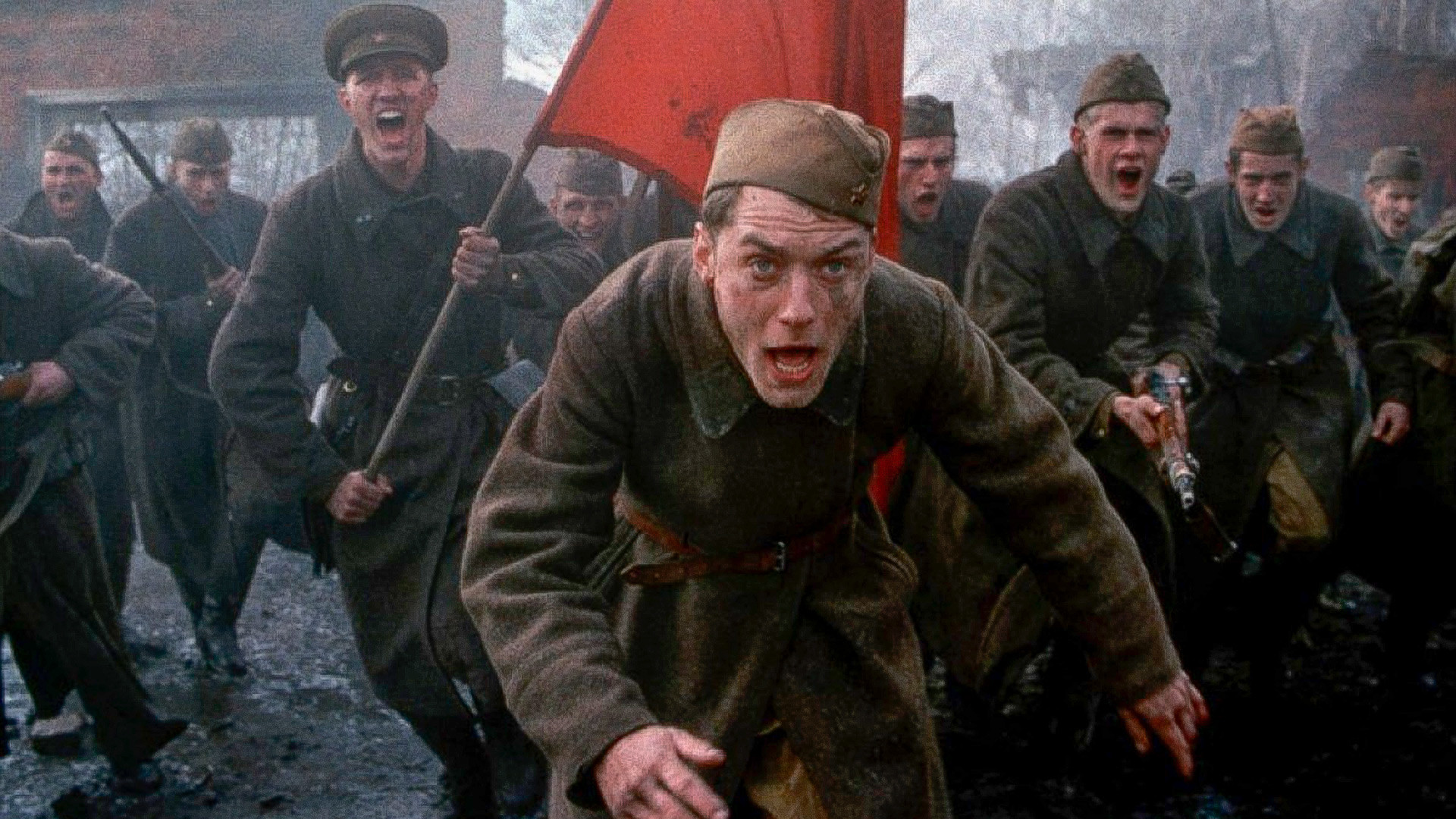 This famous movie is the chief culprit for perpetuating the various myths about the Red Army during WWII. Enemy at the Gates follows the destiny of real-life famous sniper Vasily Zaitsev during the Battle of Stalingrad.

However, it is hard to say this movie is genuinely “based on true events.” Full of absurdity and lies, it shows the Soviet army as a herd of cattle with demonic political commissars in charge.

Soviet soldiers run right at the German machine-guns literally bare-handed, with one rifle per three persons. Behind them, barrier troops shoot them in the back.

If the reality was such, the Soviets would never have won WWII. In fact, Soviet industry worked so effectively that the troops were swamped with weapons. Barrier troops, in turn, mostly operated in the rear, capturing saboteurs and deserters. If needed, they fought the enemy as regular troops.

And of course, such a movie just could not do without scenes of drunk Soviet soldiers dancing round a campfire. Enemy at the Gates deserves all five cranberries. 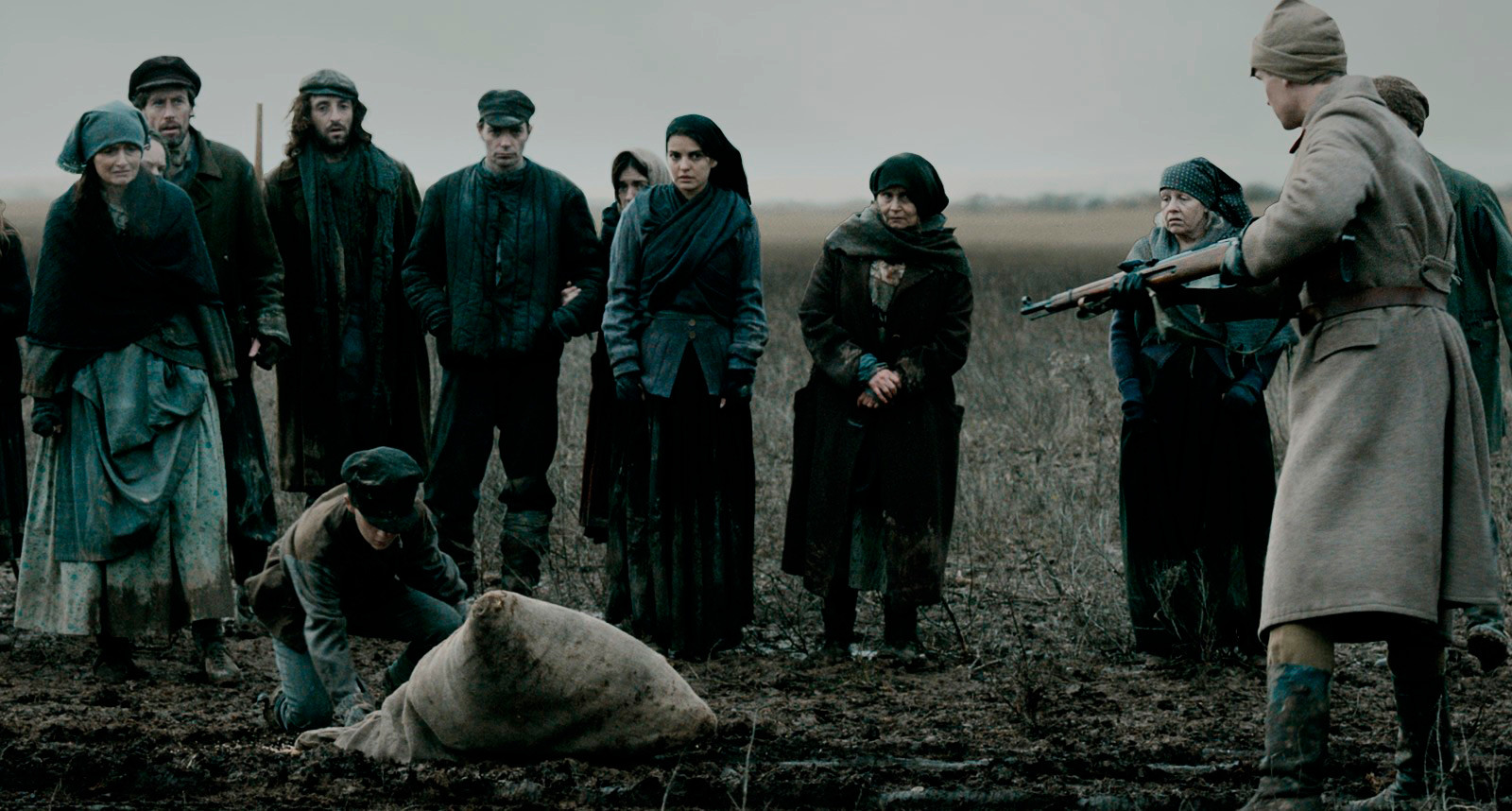 Canadian Bitter Harvest depicts Soviet Ukraine in the 1930s. According to the movie, Stalin initiated a forced starvation of the Ukrainian people, known as the Holodomor. Common Ukrainians face a deadly threat from the arriving Soviet troops, who requisition all food supplies and execute those who oppose them.

To this day, the topic of the Holodomor remains very ambiguous and painful. Ukraine, supported by the West, sees the Great Famine of 1932-1933 as a genocide of the Ukrainian people by the Soviet leadership. The facts, however, tell that the famine struck not only Ukraine, but large parts of Soviet Russia, too. Caused by the Communists’ inept agricultural policy, the famine was not directed at the Ukrainians.

In the very first frames of the movie, we see a strong contrast: happy, radiant Ukrainians on one side and dark, angry Bolsheviks on the other. This juxtaposition of good and bad lasts until the final credits roll.

Bitter Harvest portrays the Ukrainian people as the antithesis of the “Soviet horde,” forgetting that the Ukrainians were the second largest and most important nation in the USSR, an inseparable part of Soviet society.

If the reality was such, as depicted in the movie, millions of Ukrainians would never have risen up against the Nazis during WWII. The movie gets four cranberries. 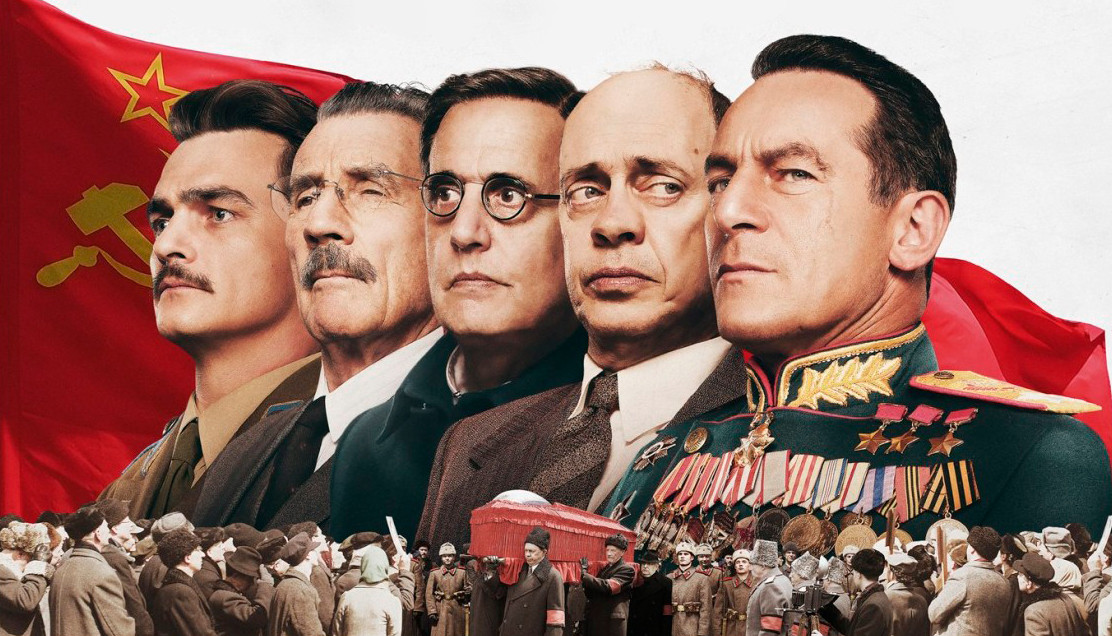 This British comedy caused a huge scandal in Russia. As a result, the movie, which tells about the political struggle in the Soviet Union after the death of Stalin, was blasted as “an offensive mocking of the Soviet past” and banned from release in cinemas.

It’s very hard to judge whether The Death of Stalin is a cock-and-bull story or not. The movie is, first of all, a huge farce. The historical figures here have little in common with their real-life counterparts - they are shown in an extremely satirical and grotesque way.

So we give the movie an average rating of three cranberries. 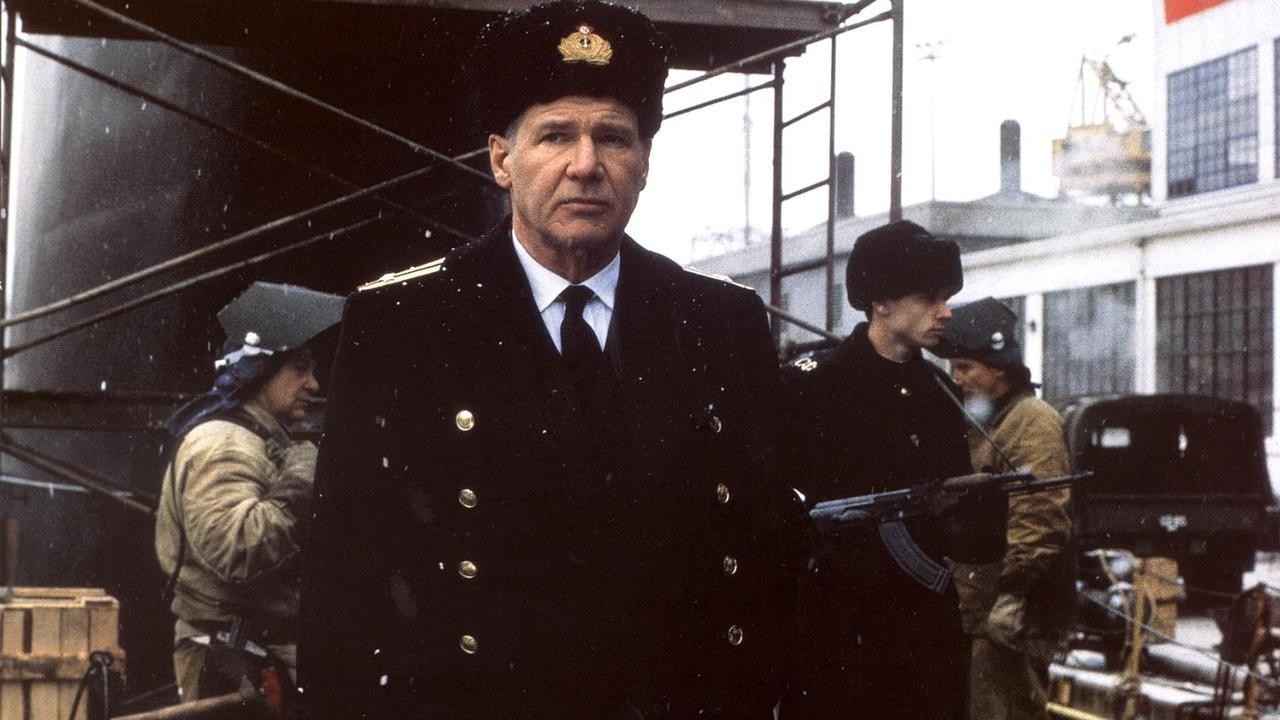 Based on a true story, K-19 tells about the heroism of a group of Soviet sailors who prevented a nuclear catastrophe on a nuclear-powered submarine in 1961 by sacrificing their health and lives.

During pre-production of the movie, the creators had long consultations with the surviving sailors from the K-19 submarine. When the sailors saw the first script, they were truly shocked: the Soviet submarine crew was shown as a bunch of drunk barbarians who got their hands on such an instrument as a nuclear submarine with no clue about how to deal with it.

“The officers beat their subordinates and stole oranges. One of them sat on the nuclear reactor and drank vodka. All the sailors swore,” electrical technician Boris Kuzmin recalled the original script.

Outraged, the sailors wrote a collective letter to the director and actors, which, to the credit of the latter, was taken into consideration. Over 90% of the script was rewritten.

Although some naive and absurd moments remain, the final version of K-19 is a totally different movie, generally approved by the veterans of the Soviet submarine.

Harrison Ford nailed the role of the Soviet captain 100%. He truly shocked the sailors, since he reminded them of their commander. “When watching it, I even had to take my heart medicine,” officer Yuri Mukhin said.

One of the best Hollywood attempts to depict Soviet history, K-19: The Widowmaker gets two cranberries.

This new British-American TV series traces the chronology of the most famous nuclear disaster in history.

Chernobyl is a strong drama, concentrating on the tragedy of the common people, who at first did not even realize what kind of nightmare they were dealing with.

The adequate portrayal of the locations, buildings, transport and even small details, such as the firefighter uniforms and pioneer ties makes the series a success. We give Chernobyl just one cranberry.