Culture
Anna Sorokina
Slava PTRK
Slava PTRK has left his mark in the most unexpected places across the country and beyond its borders. His works include cartoon characters from the 1990s and figures that reflect social problems.

Twenty-nine-year-old Stanislav Komissarov, aka Slava PTRK (an abbreviation of the word "Patriot", his alias in computer games), is a street artist from the Urals. Nowadays he lives in Moscow and travels across Russia and Europe, leaving ‘mementos’ in different cities in the form of graffiti and installations that, by and large, deal with burning social issues. He has been doing street art for about 10 years, and has been very successful in the process: The artist has gone on to win many Russian and international prizes. 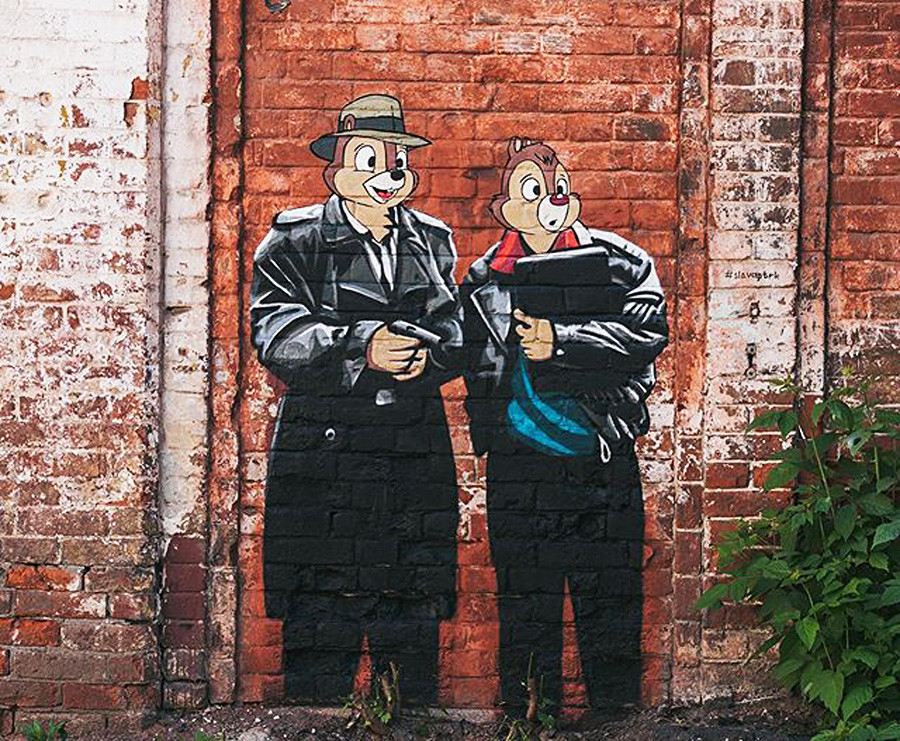 Slava PTRK spent his childhood in the Kurgan Region town of Shadrinsk. Like all children in Russia at the time, he would be glued to the television screen watching cartoons such as Chip 'n Dale: Rescue Rangers, Ninja Turtles and The Black Cloak. In one of his series, Childhood in Front of the TV, Slava PTRK combines images from the cartoons of his childhood memories with films about Russian gangsters that, in the days of his youth, were no less popular among adult viewers than Disney fairy tales. 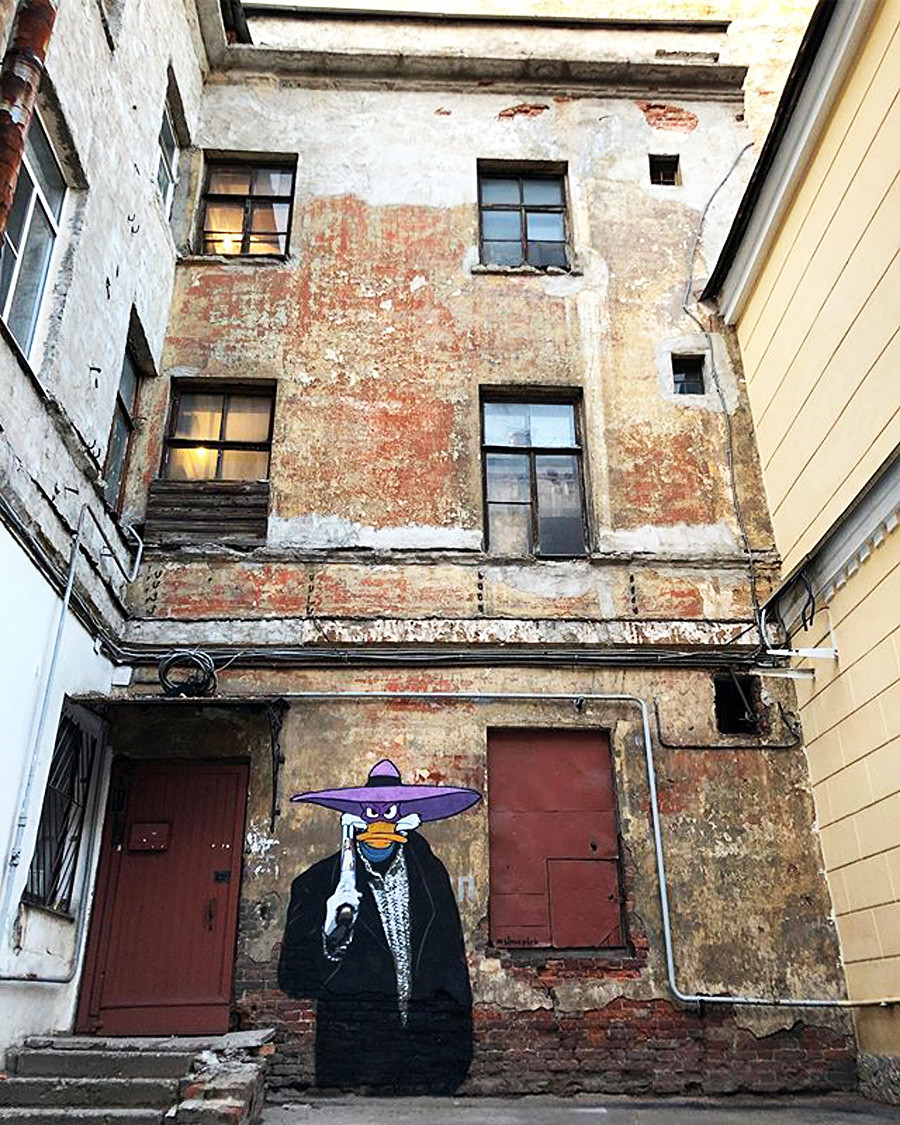 Graffiti works in the series have appeared in Nizhny Novgorod, St. Petersburg and Yekaterinburg - the settings of the Russian films Zhmurki (Dead Man's Bluff), Brat (Brother) and Brigada (Law of the Lawless). 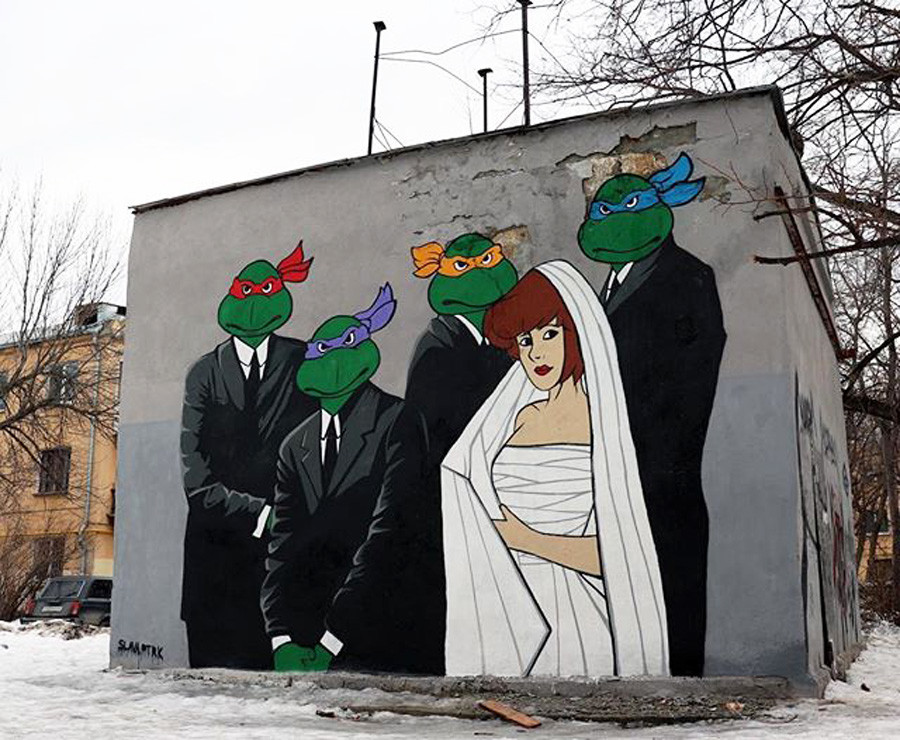 "I’ve tried to show visually how memory works," Slava says about his work. "News, movies, TV shows, cartoons - all goes in one pile, and everything is mixed together." 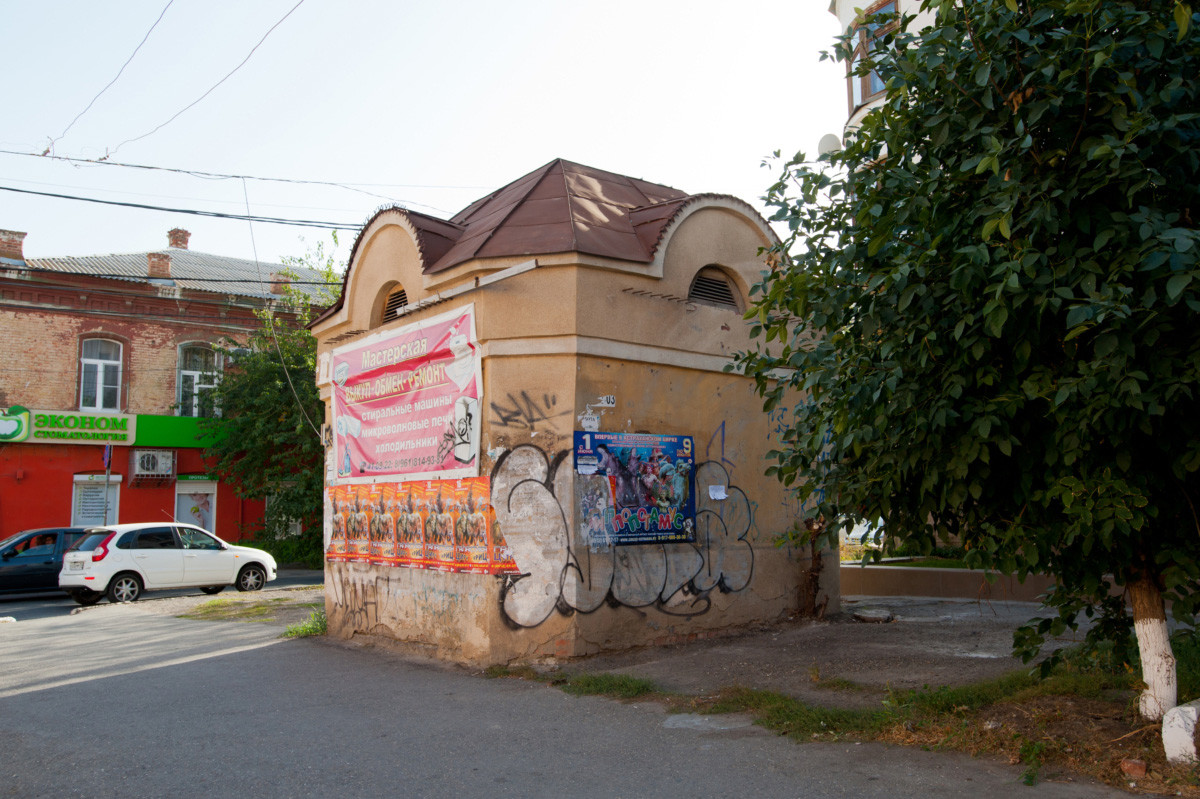 The artist used to campaign against bill sticking in Astrakhan, southern Russia. A kiosk right in the city center was constantly being defaced by leaflets with private ads. Slava PTRK painted ironic copies of announcements such as "Garage for sale", "Alcoholism treated", "Suspended ceilings", and painted the kiosk in monochrome. Even a year later not a single advertising sticker had appeared on it. 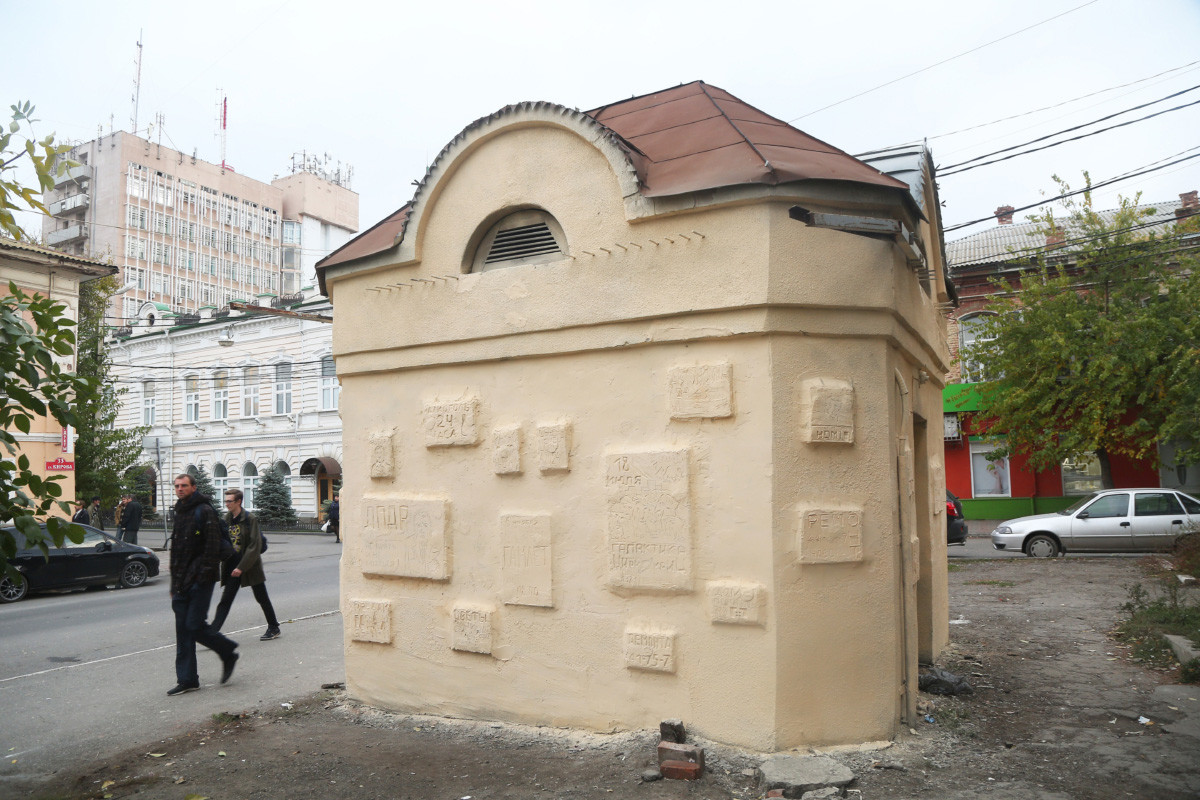 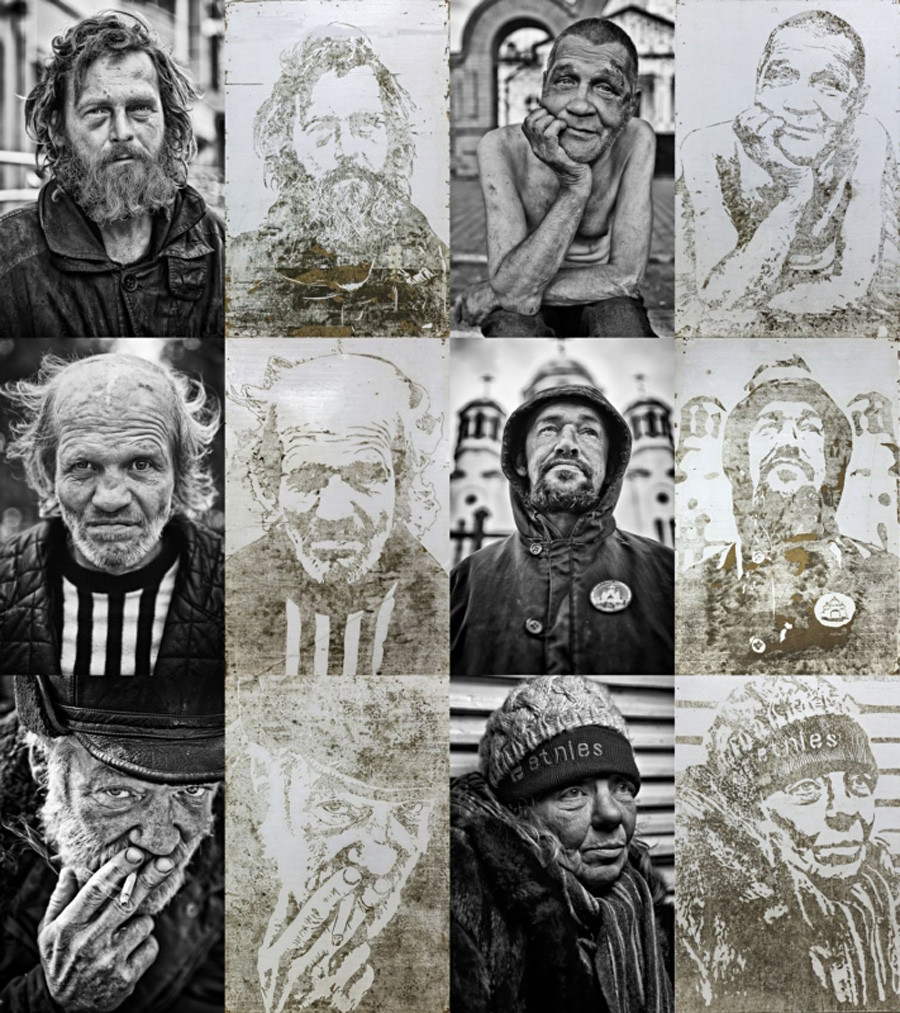 The artist considers Yekaterinburg, not Moscow, to be the most favorably-disposed city in its attitude towards street art: He doesn't particularly have to keep out of sight or ask anyone's permission to do his graffiti. Which is why the Urals has the largest number of his works, particularly ones that raise acute social issues, such as helping the homeless. He says that ordinary city residents regard homeless people as street dirt and simply ignore them. However, Slava reminds us that they are human too, just with highly tragic lives. Slava painted portraits of homeless people in Yekaterinburg’s ‘dirtiest’ areas using the mud from the wheels of cars and street puddles. 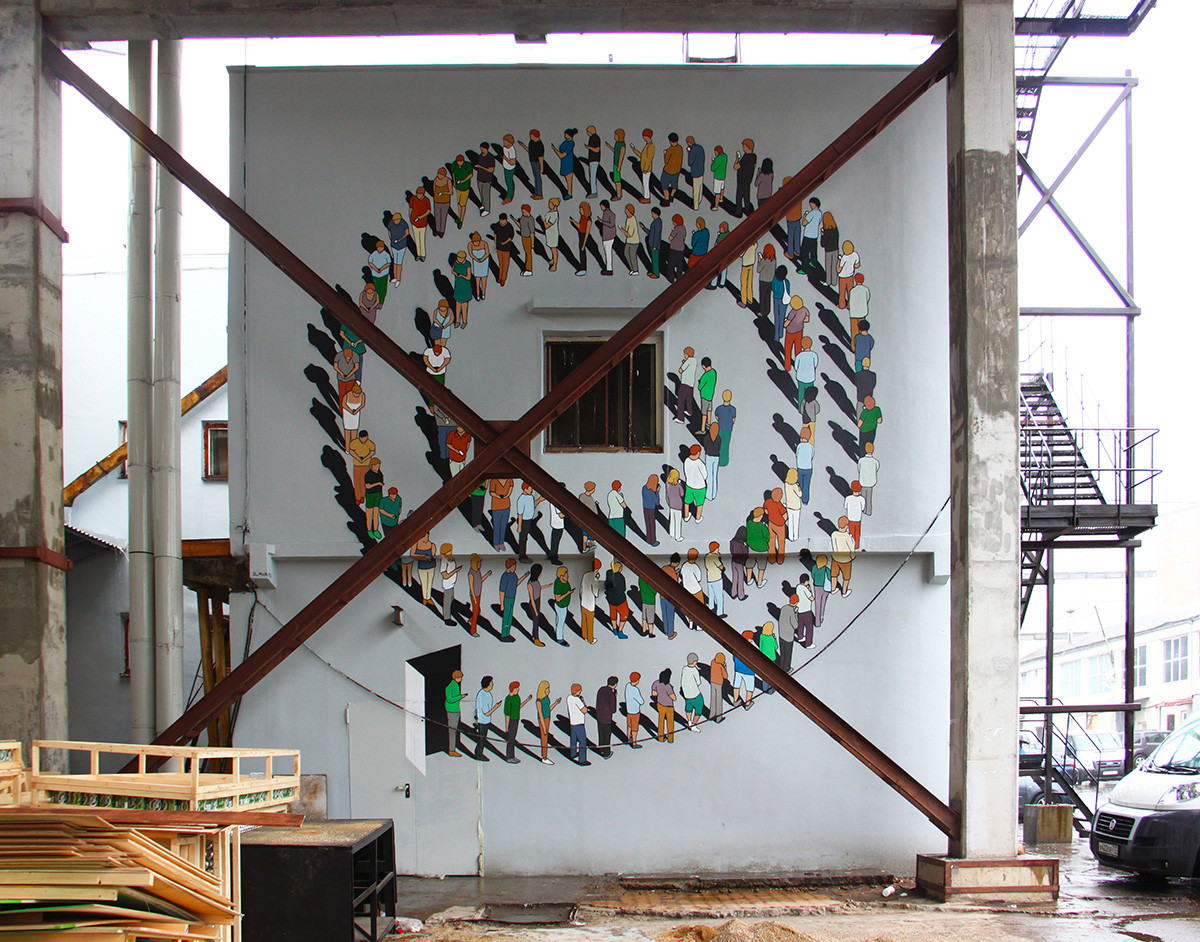 Where are we all going, and why? All this is unimportant, and the main thing is to hold on to your smartphone. This graffiti work in the Pravda creative center in Moscow was painted by the artist for the TBRG GREEN JAM music festival. This is how he describes it: "Moving confidently in a closed spiral phones in hand, from nowhere to nowhere." Sound familiar?

Seven portraits of elderly men sporting beards made of tear-off ads. It is a project about loneliness in old age. Slava used real people from Yekaterinburg as models for his portraits on Bolshoi Zlatoustinsky Lane in Moscow. The tear-off tabs have reminders written on them: "Ring your mother", "Go to see your parents" and "Visit your grandmother", as well as the address of the Old Age Can Be Fun foundation, which helps elderly people. And when someone tears off a tab, the faces on the portraits ‘get younger’. 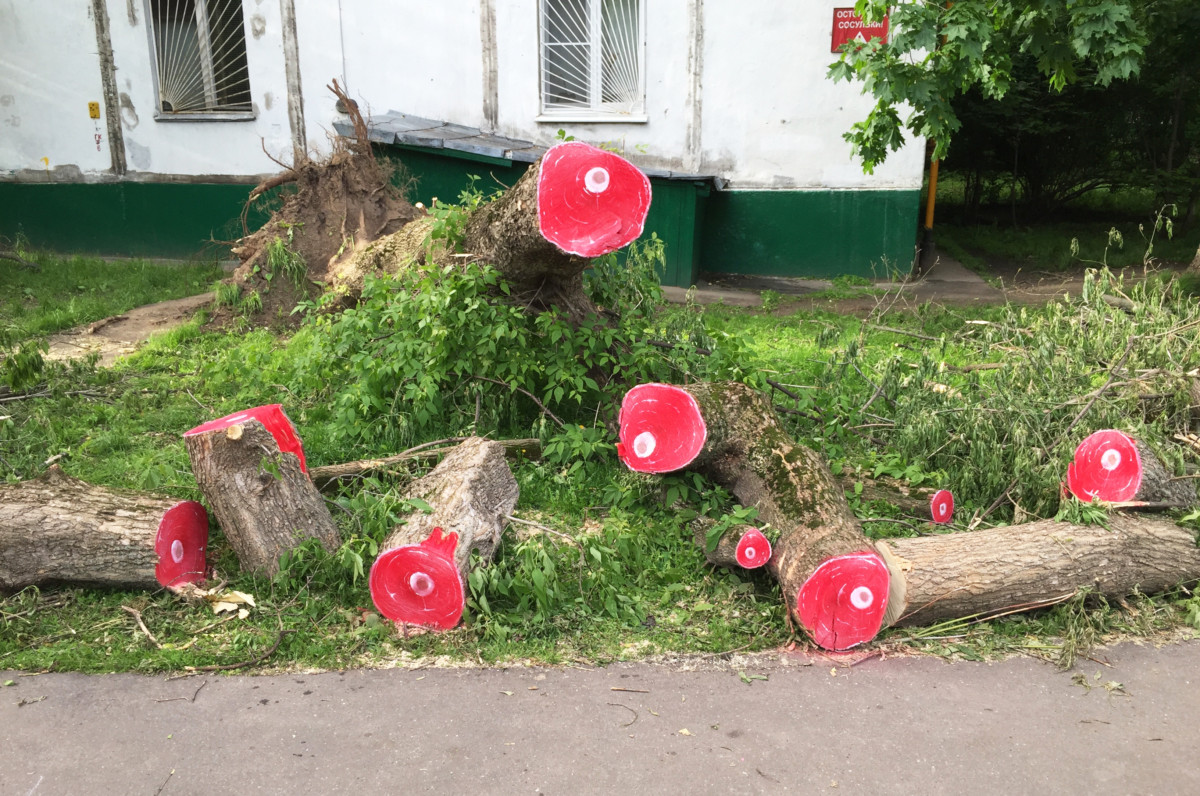 Muscovites will long remember June 2017 when an unprecedented hurricane swept the city, uprooting trees (“s myasom” or “with the meat", as the Russian phrase goes) and bringing down roofs. In the wake of this dramatic event, his work, Meat, ‘appeared’, in which Slava painted ‘raw steaks’ on the sawn ends of the fallen tree trunks. 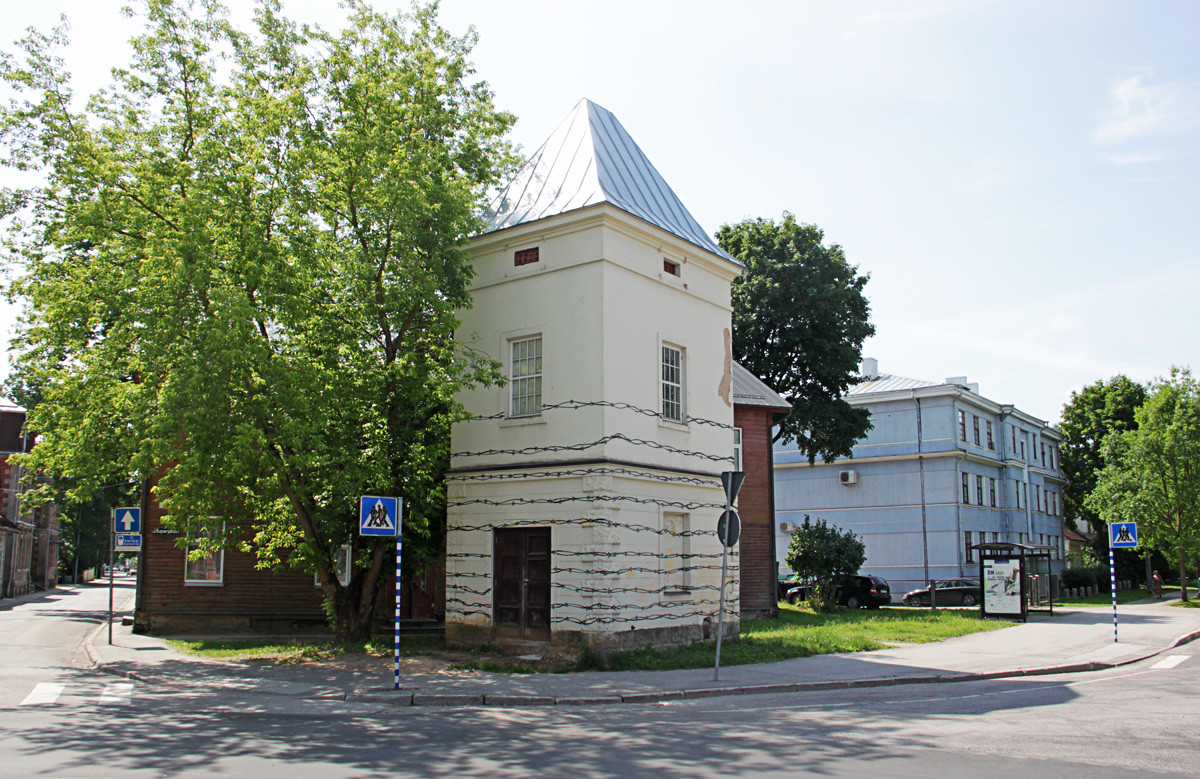 Slava PTRK is known for reflecting on the theme of the Soviet Union in his works and the aftermath of its breakup. The artist used the wall of a building in the Estonian city of Tartu as the ‘canvas’ for the work he contributed to the Stencibility festival. "Barbed wire in which the barbs are Soviet stars with a hammer and sickle inside - an evident symbol of non-freedom, censorship, the Iron Curtain and total control by the authorities," is how the artist describes the work on his website. According to his interpretation, the building represents the human body wrapped forcibly in barbed wire. 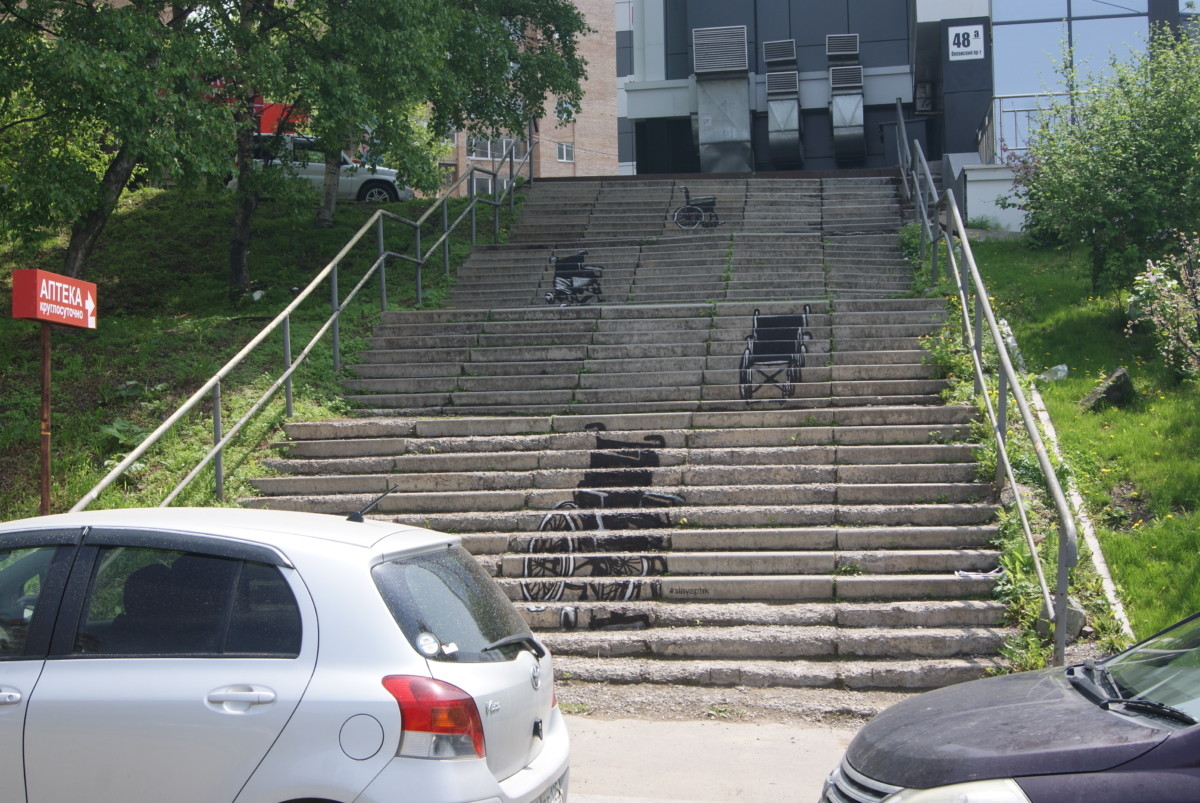 The work, which is painted on numerous flights of steps in the streets of Vladivostok, hints at the lack of interest in inclusivity projects in Russia as a whole, and at the “don't-give-a-damn” attitude to wheelchair users in Russia’s eastern capital, in particular. 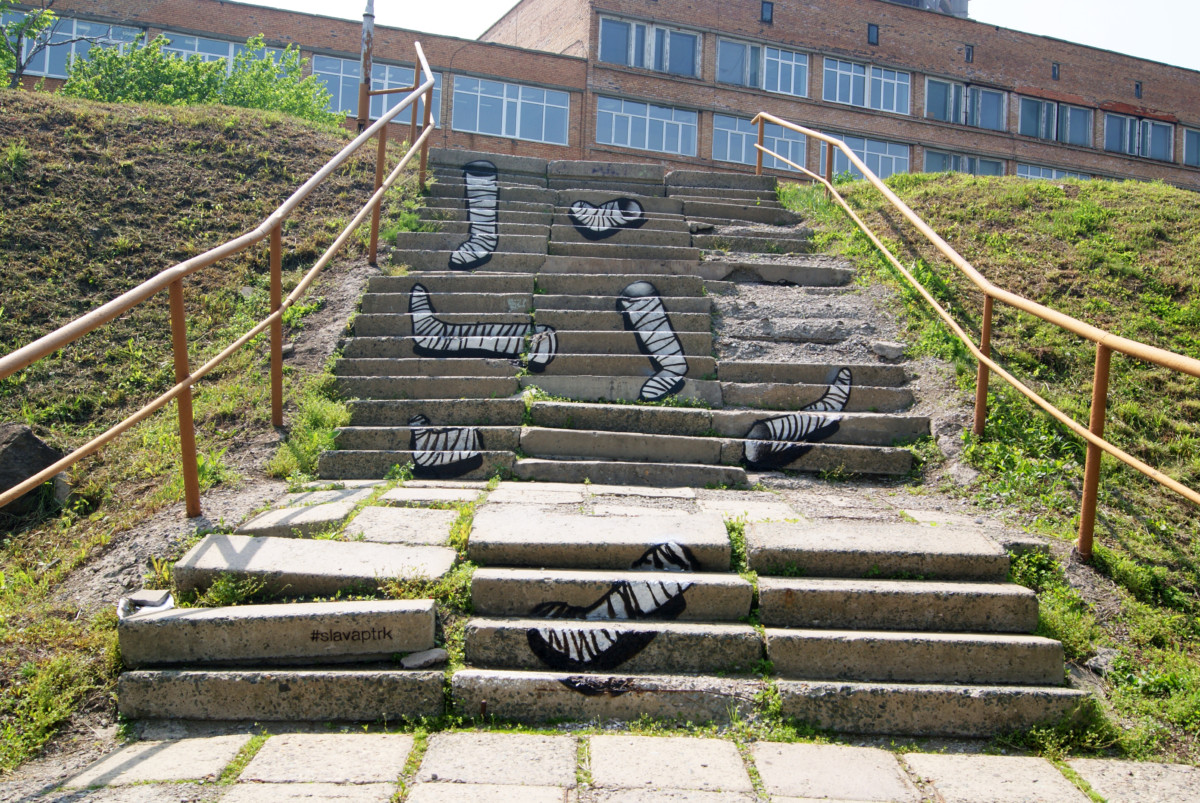 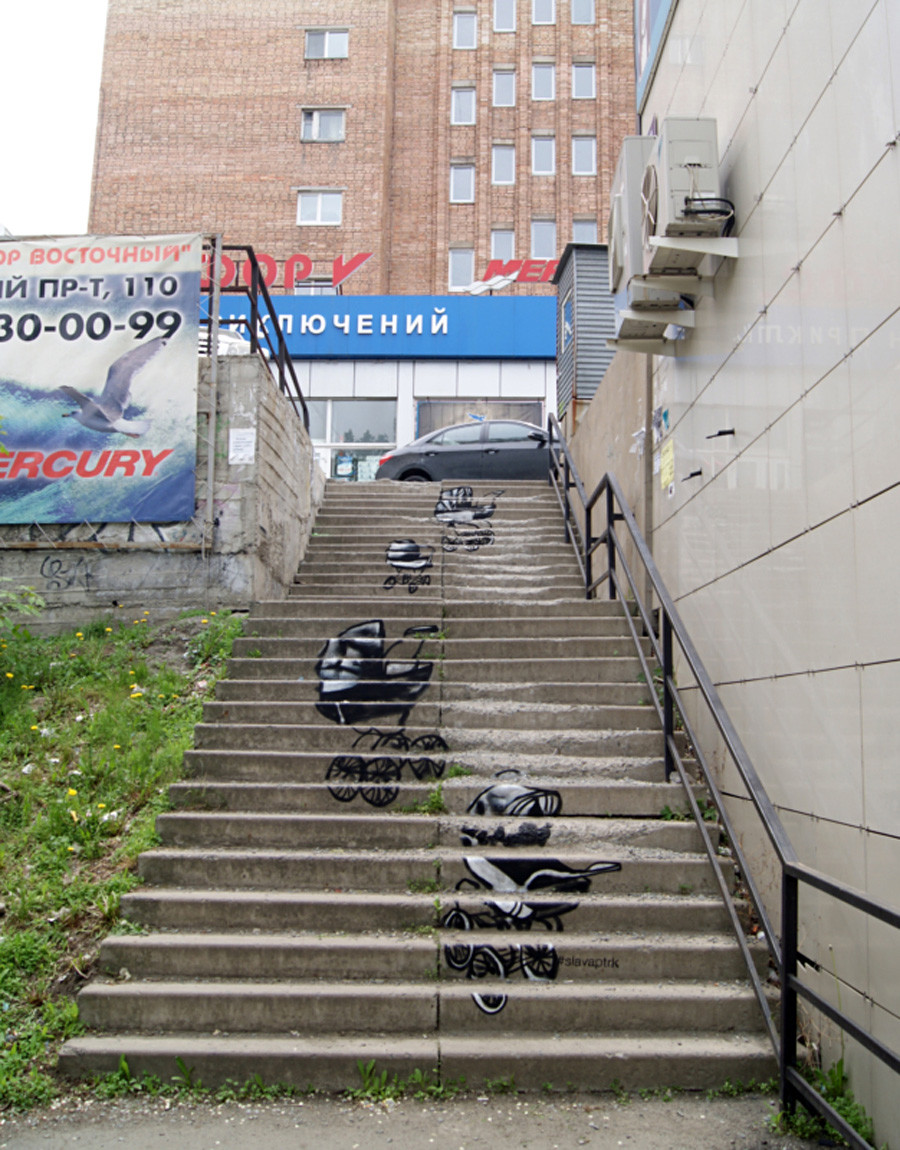 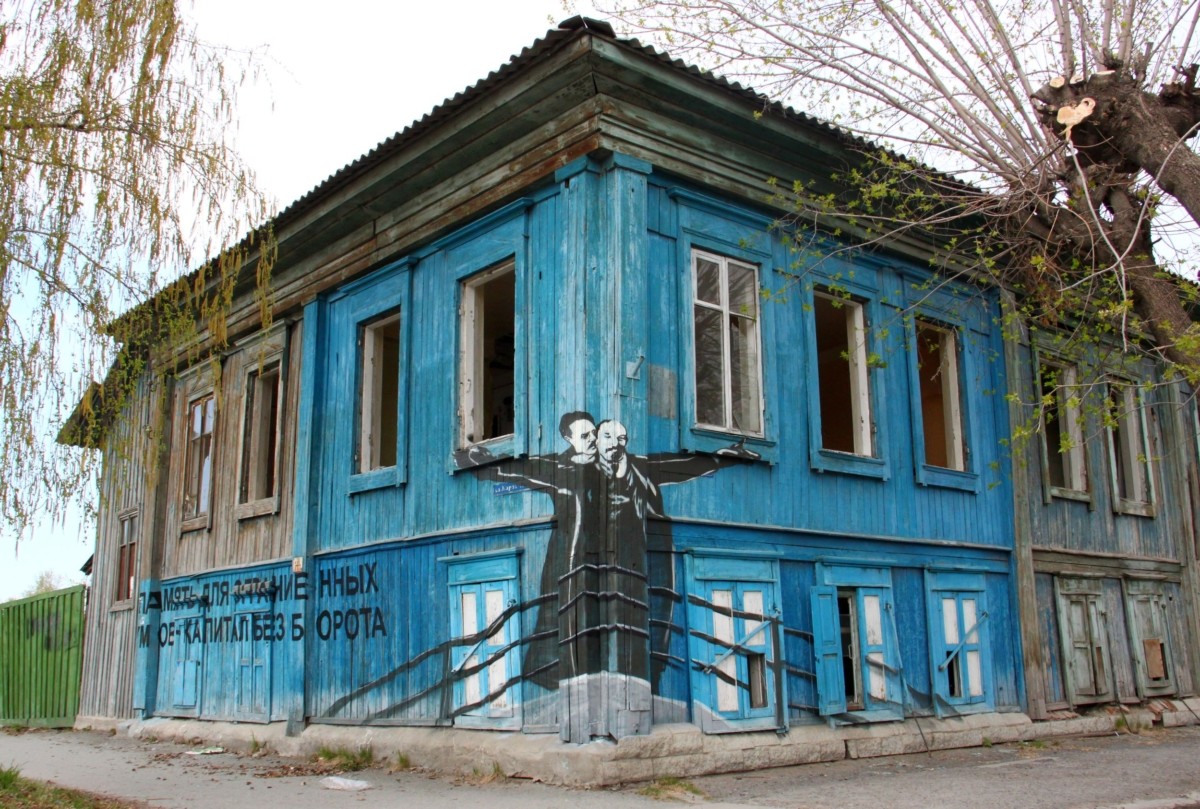 The graffiti work ‘Yedim k dnu’, recalling that famous scene from the movie Titanic, appeared in the artist's native town of Shadrinsk at the intersection of two streets named after two ideologists of Communism. But instead of Kate Winslet and Leonardo DiCaprio, the graffiti depicts German Communist Karl Liebknecht whispering something intimate in the ear of the leader of the world proletariat, Vladimir Lenin.

No irony was lost on the choice of movie and historical references - and the title of this work being ‘We’re going to the bottom’. 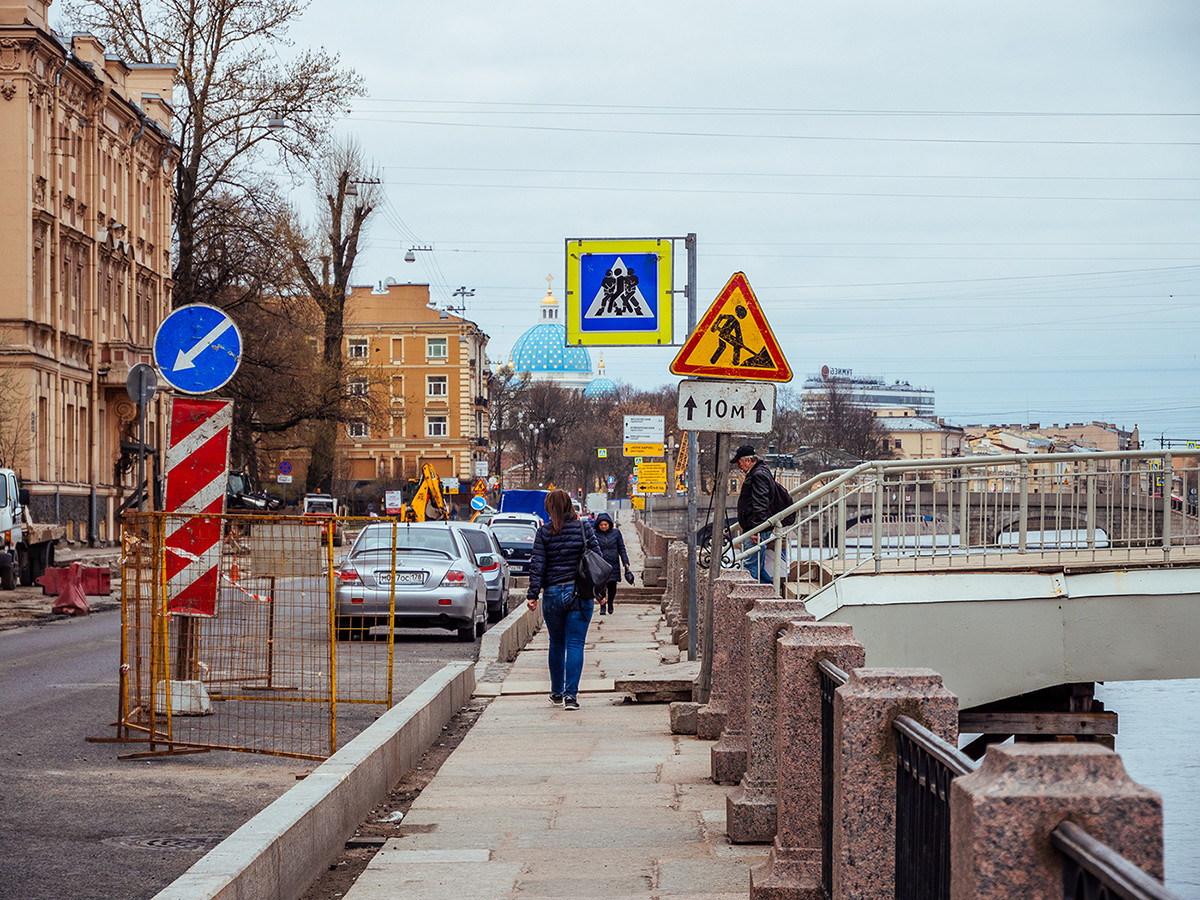 In the wake of a protest in St. Petersburg, at which over a thousand people were detained, a ‘new’ road sign appeared on the Fontanka embankment showing two policemen ‘arresting’ the crossing pedestrian. The artist managed to paint the work on a sign right in front of the FSB [Federal Security Service] building! Brave!