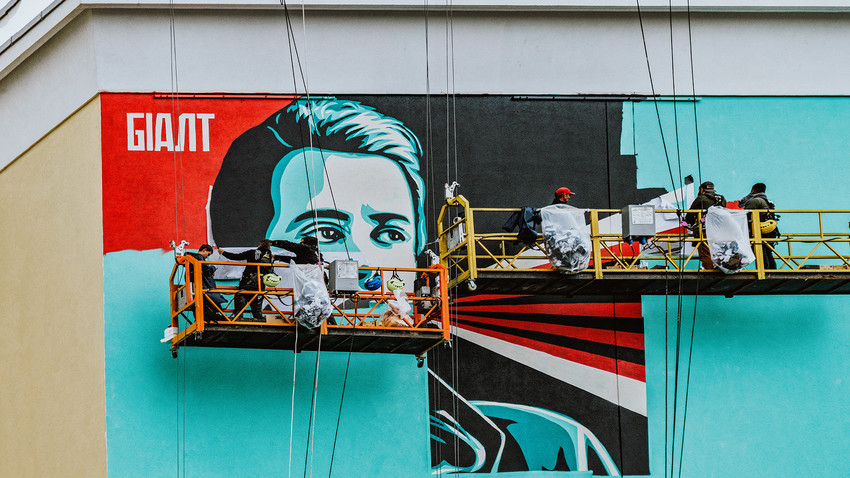 Work in progress. 'Art Is The Hammer' by Shepard Fairey

Press photo
The Atrium mall at Kurskaya Metro Station has been transformed from an ugly building ridiculed by architects into an original art installation.

Pokras Lampas is the only Russian artist to paint on the walls of the mall within ARTRIUM project. Specializing in Cyrillic calligraphy, his work can be seen on the facade of the main entrance and in the overpass leading from Kurskaya Station square to the city center. Here are some examples of his original style in English and Russian:  ĤØᑭΣ / НАDΣЖДÅ (Hope), Ł0ƲΣ / ЛЮচØƁb (Love), ÇᖇΞА卞Σ / СѺƷDÅƁΔŪ (Create). 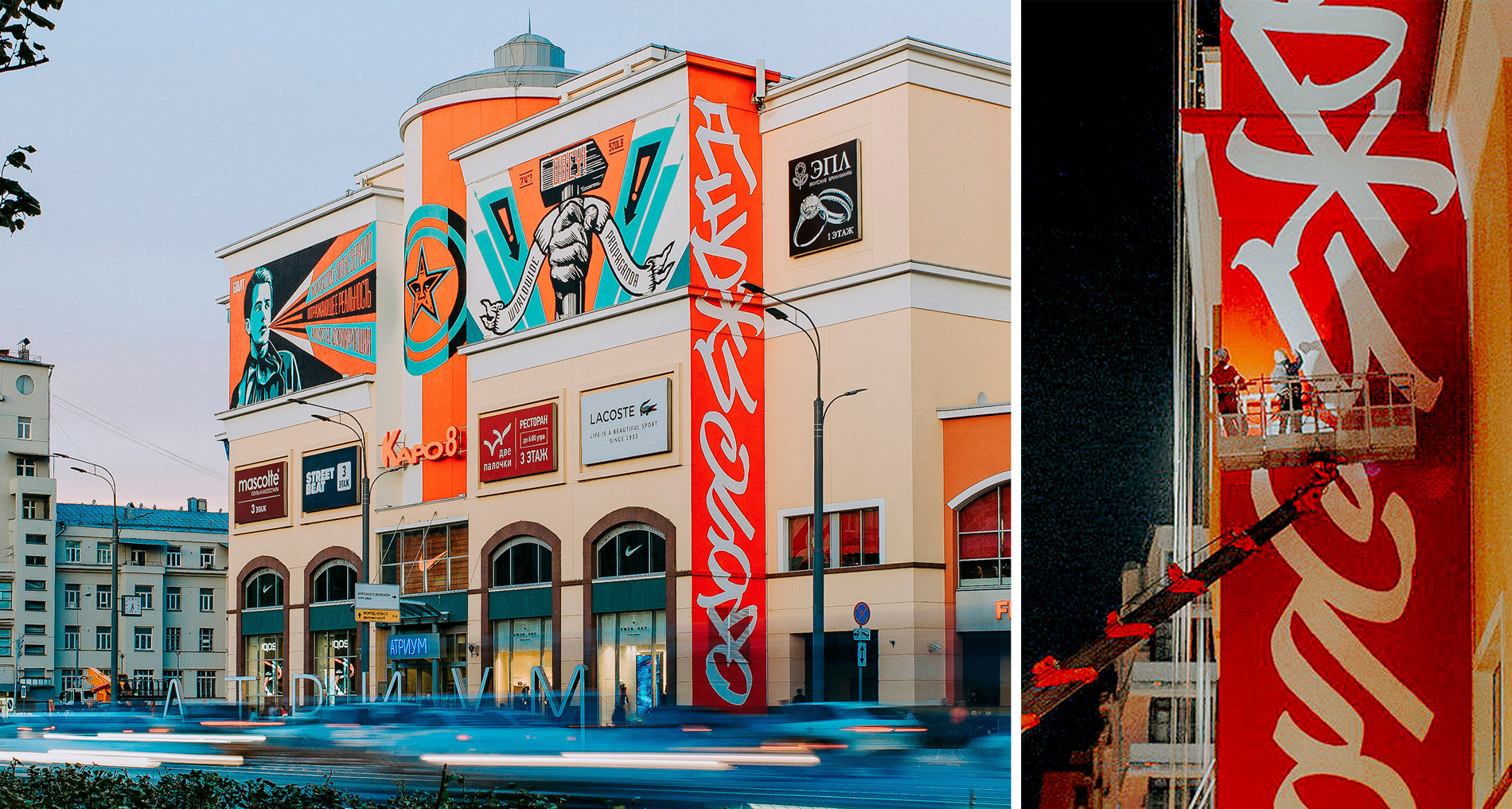 Another calligraphic work on the facade belongs to U.S.-based Faust, who wrote the red-and-white phrase “Keep Your Word” in Cyrillic. A “calligraphy star” (according to The New Yorker), this is the first time he has used Cyrillic in his work. 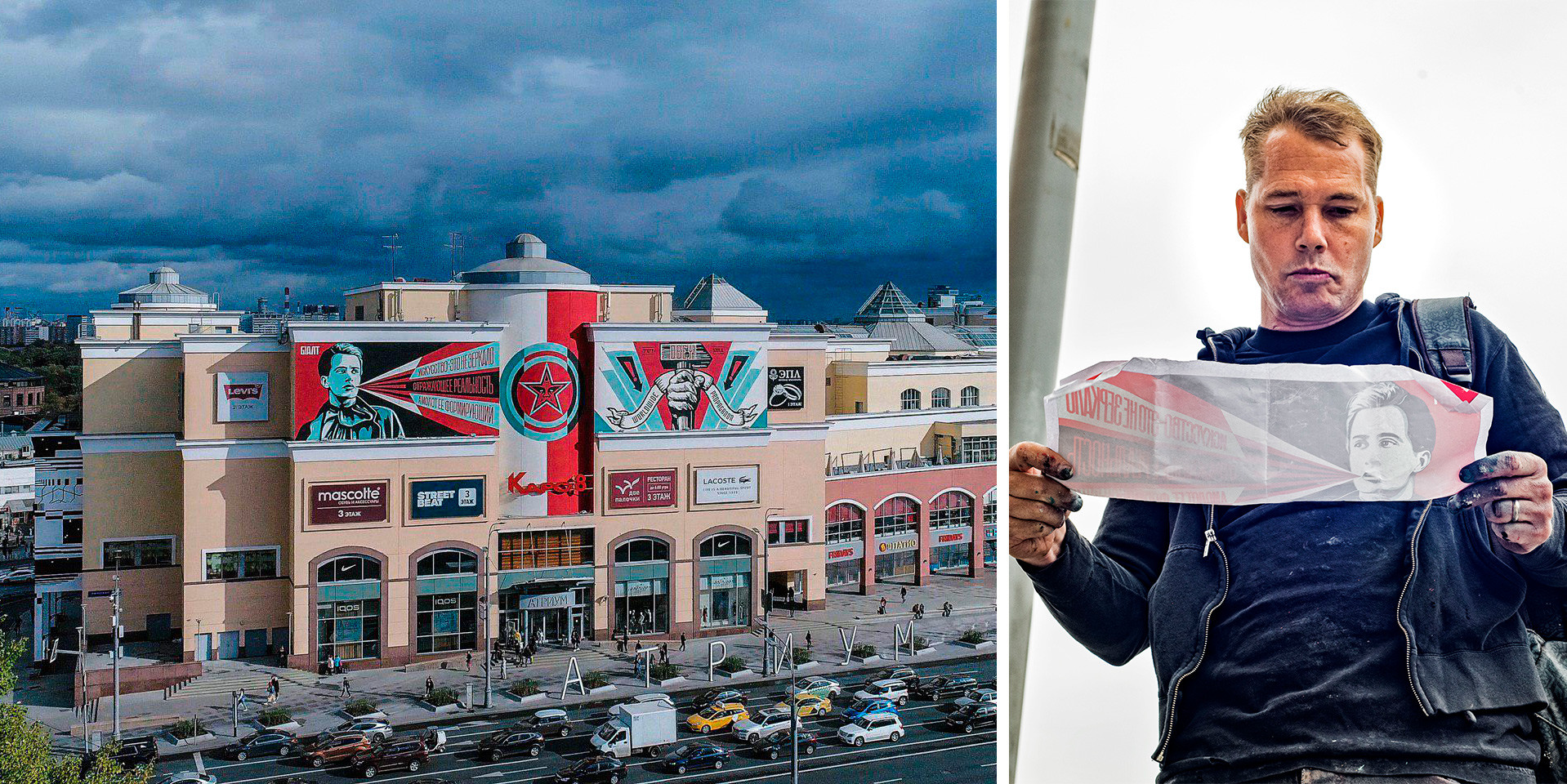 The US artist nicknamed Obey is known for his graffiti worldwide. Remember the face of Obama with the word “Hope”? That’s him!

Art Is The Hammer (full title: “Art is not a mirror that reflects reality, but a hammer that shapes it”) is his first work in Russia, inspired by the Russian avant-garde. The phrase was taken from Bertolt Brecht. 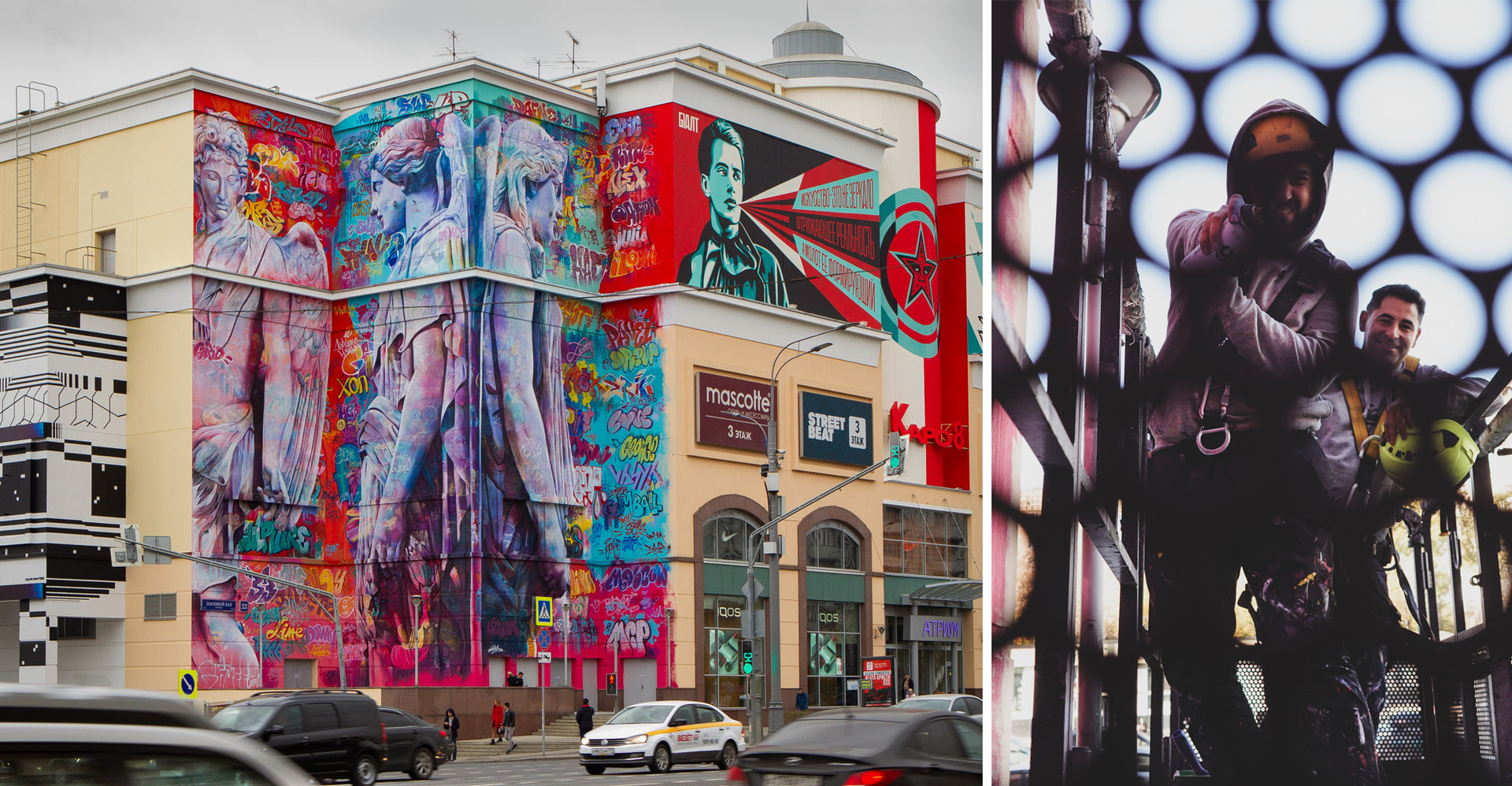 The pseudonym PichiAvo conceals two Spanish artists with a penchant for antiquity who bring images of classical sculpture into the world of graffiti, creating a new fusion style in the process. A section of the facade features their depiction of the god Eros and his muses, surrounded by classic graffiti inscriptions.

The mix of monochrome pixel compositions with bright accented colors is the trademark style of Felipe Pantone. His works address the themes of unity and the struggle of opposites – analog and digital, people and machines. 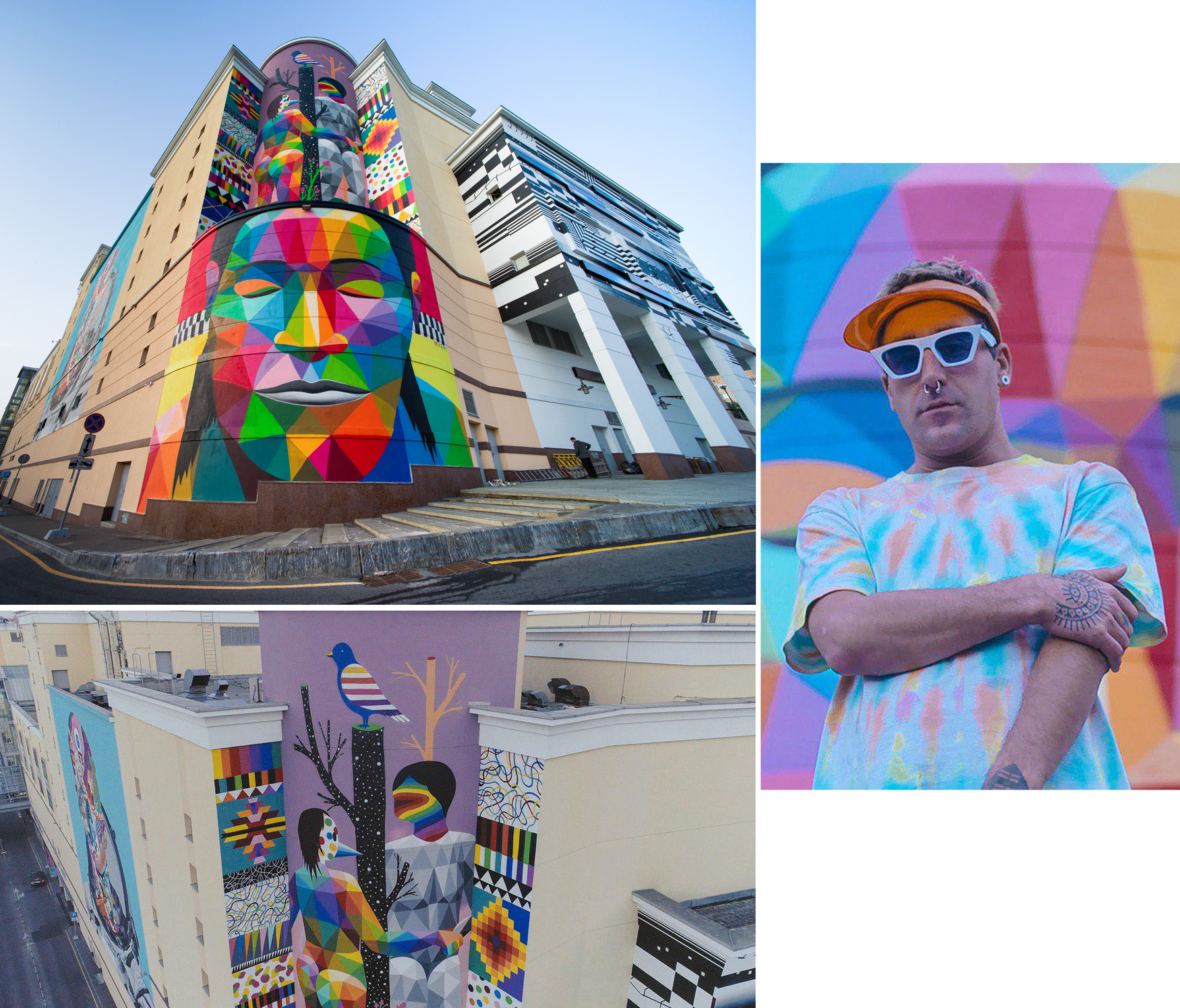 Besides graffiti, the artist is active in painting and sculpture. Among his works are the frescoes in the International Church of Cannabis in Denver, USA, and the abandoned Temple of Chaos in Oviedo, Spain.

His Moscow piece reverts to his habitual ethnic motifs, while the painting technique combines the traditions of figurative art and cubism. 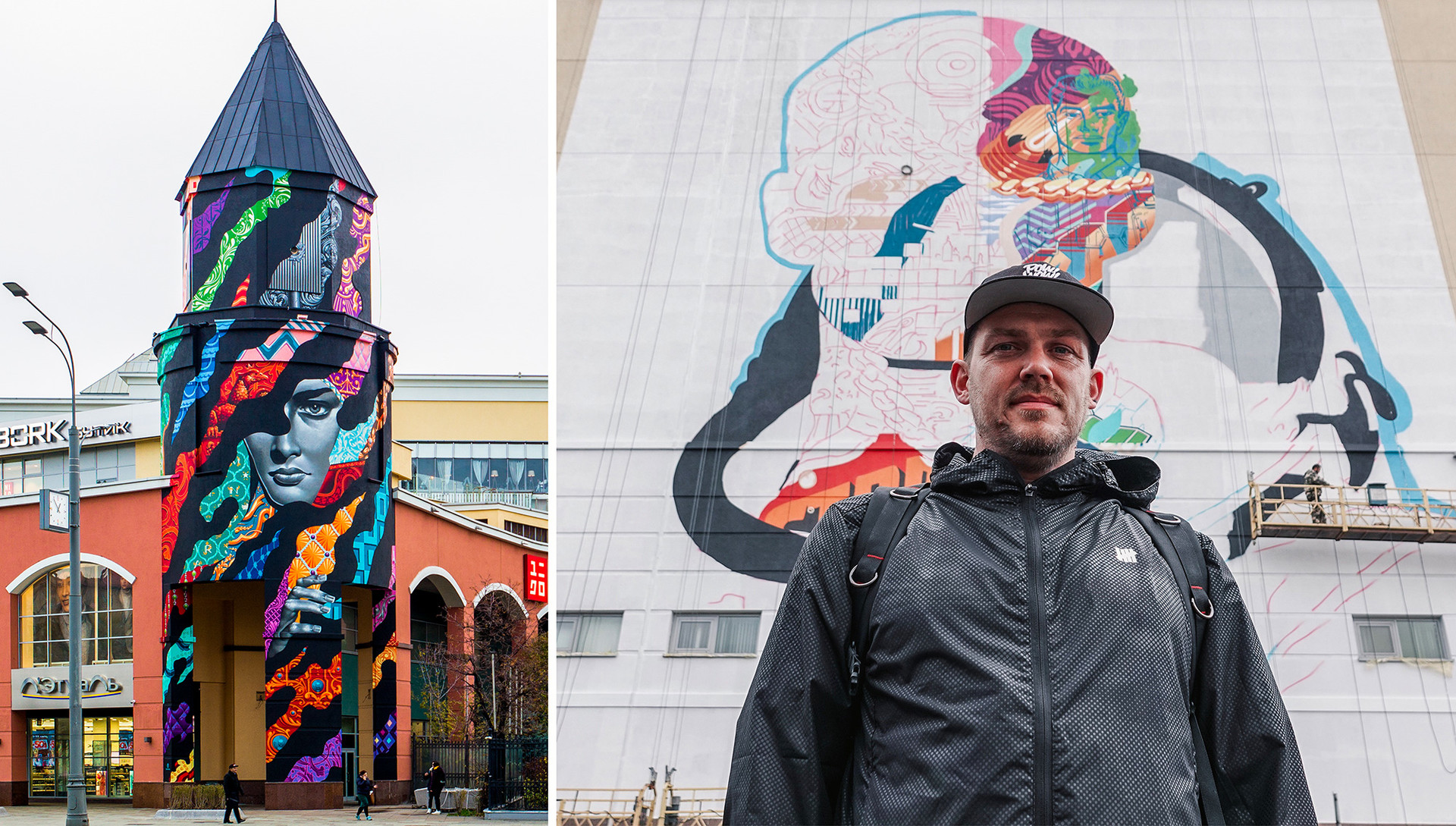 Eaton, whose works feature in the collection of New York’s MoMA, depicts an astronaut as a symbol of someone able to overcome anything, even earthly gravity. The inscription on the graffiti work reads: “Keep fighting.”

According to the project organizers, the artist planned to paint a triptych. We await the third installment!

8. Faith47, USA. You Awoke Within The Long Forgotten 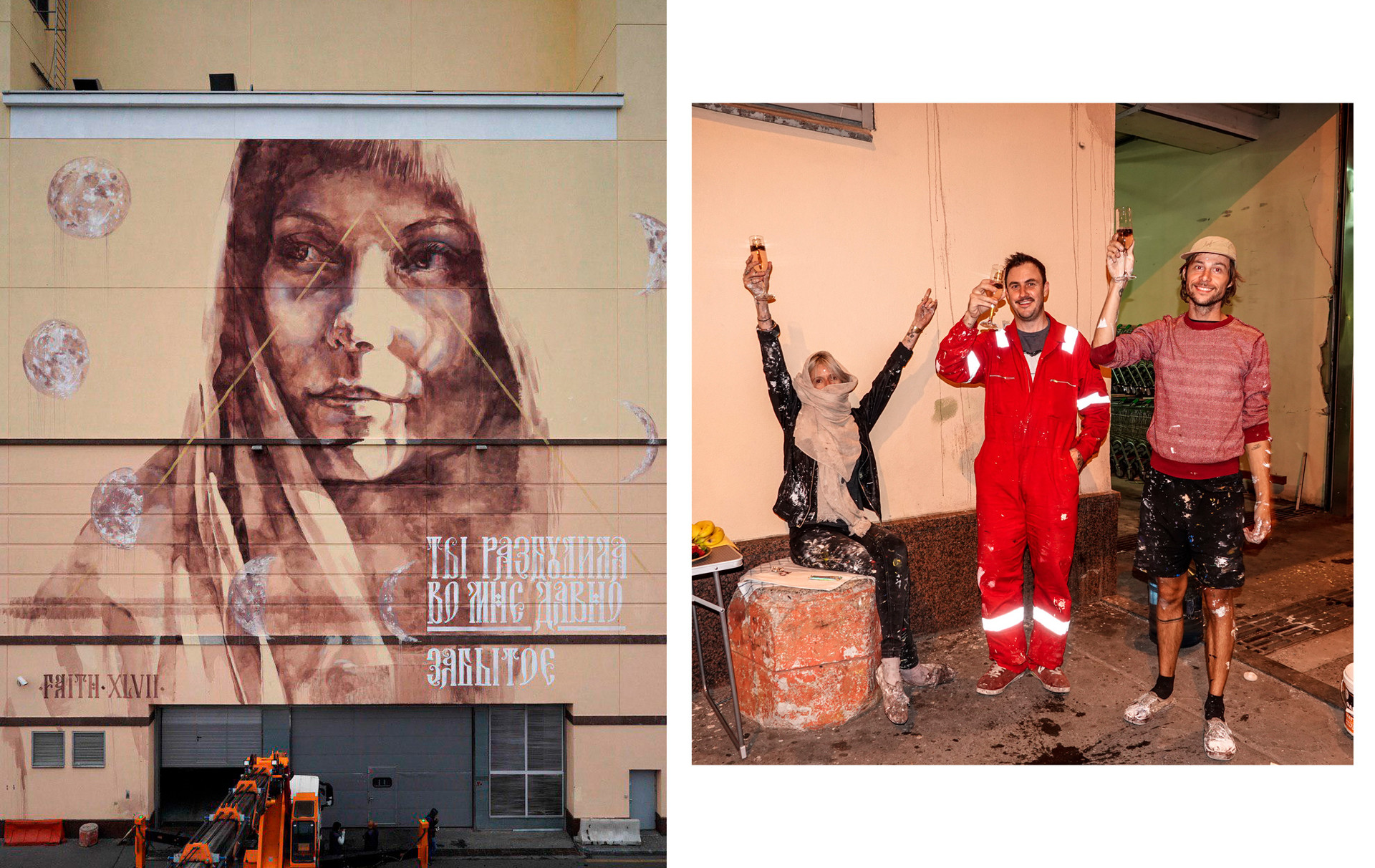 Faith47 also decided to use Cyrillic, stylized as an old Church Slavonic font. “You awoke within the long forgotten” reads the caption to the portrait of the pictured girl. The globes floating around her reflect the artist’s passion for cartography and projection mapping.

The artist found fame for his large-scale graffiti Brave, dedicated to the memory of the victims of 9/11. Not disclosing his real name, in his Moscow creation WK Interact returned to the topic of war and peace, portraying a soldier returning home in peace.