Victor Arnautoff, the Russian behind the artwork that divided America

Victor Arnautoff's self-portrait against the background of his mural.

Dick Evans (CC BY 4.0); Russian Museum
This Russian artist caused an epic scandal recently with his depiction of George Washington as a slave-owning conqueror of Native Americans. But the rest of his life in the U.S. is, arguably, even more controversial - such as at one point being named a threat to national security.

The modern U.S. is reconsidering its past in many ways, not without scandals – take removing the Confederate monuments in the southern states, for instance, which caused serious political clashes. In 2019, all of a sudden, a mural at San Francisco’s George Washington High School, painted by Russian-born Victor Arnautoff in 1936, tuned out to be a new bone of contention.

The thing is Arnautoff’s mural portrays the legacy of George Wahington, the country’s first President, pretty much as it was in reality: with black slaves surrounding him and a dead Native American lying on the ground, as pioneers march westward under his command.

On July 2, 2019, the school board voted to destroy the mural on the premise that it may hurt the feelings of POC and Native American students. “It might be art and it can also be racist; it can be both,” said one of the board members. Those who are defending the mural and appealing the board’s decision believe that whitewashing history (and Washington being a slave owner is a historical fact) doesn’t help make society more inclusive and tolerant, as the former group believes.

The legal battle over this issue has the potential to stretch out for years, as is often the case.

Victor Aranautoff’s own life, however, can itself be considered the subject of much controversy. What was a Soviet painter doing painting murals in 1930s America anyways? 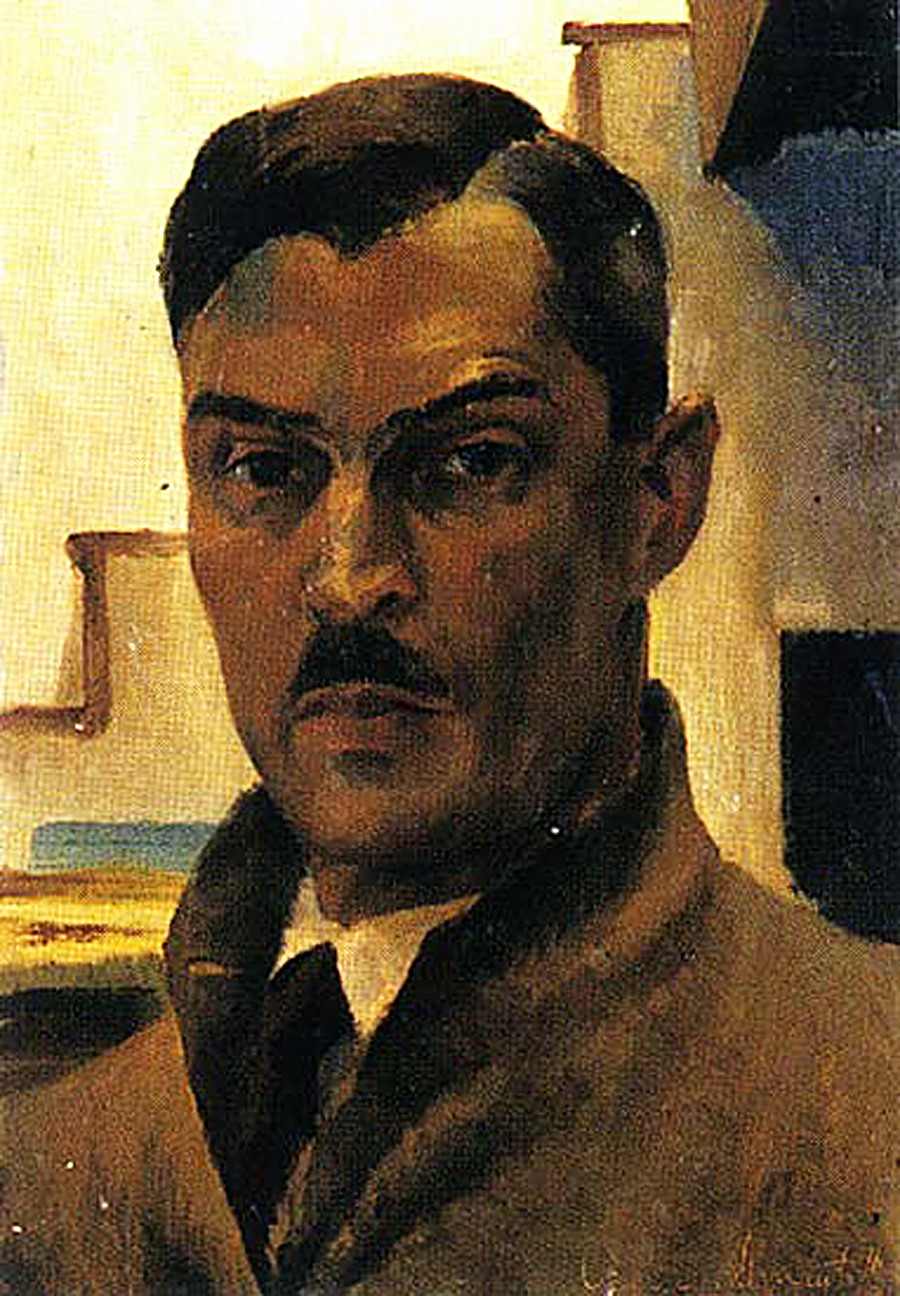 Like many distinguished Russians , Victor Arnautoff (1896 – 1979) had had to leave his native country during the revolution of 1917 and the civil war that followed it. Not everyone, though, was going out with such a bang: a squadron commander during WWI, Arnautoff ruthlessly fought against the Bolsheviks within the White Army, until its ultimate defeat in 1922.

After spending a couple of years in China as horse-riding instructor and calligrapher, in 1925 Arnautoff moved to the U.S., where he enrolled in the California School of Fine Arts and concentrated on improving his artistic skills. As it turned out, he was talented enough to become an assistant to Diego Rivera.

Change of heart in Mexico 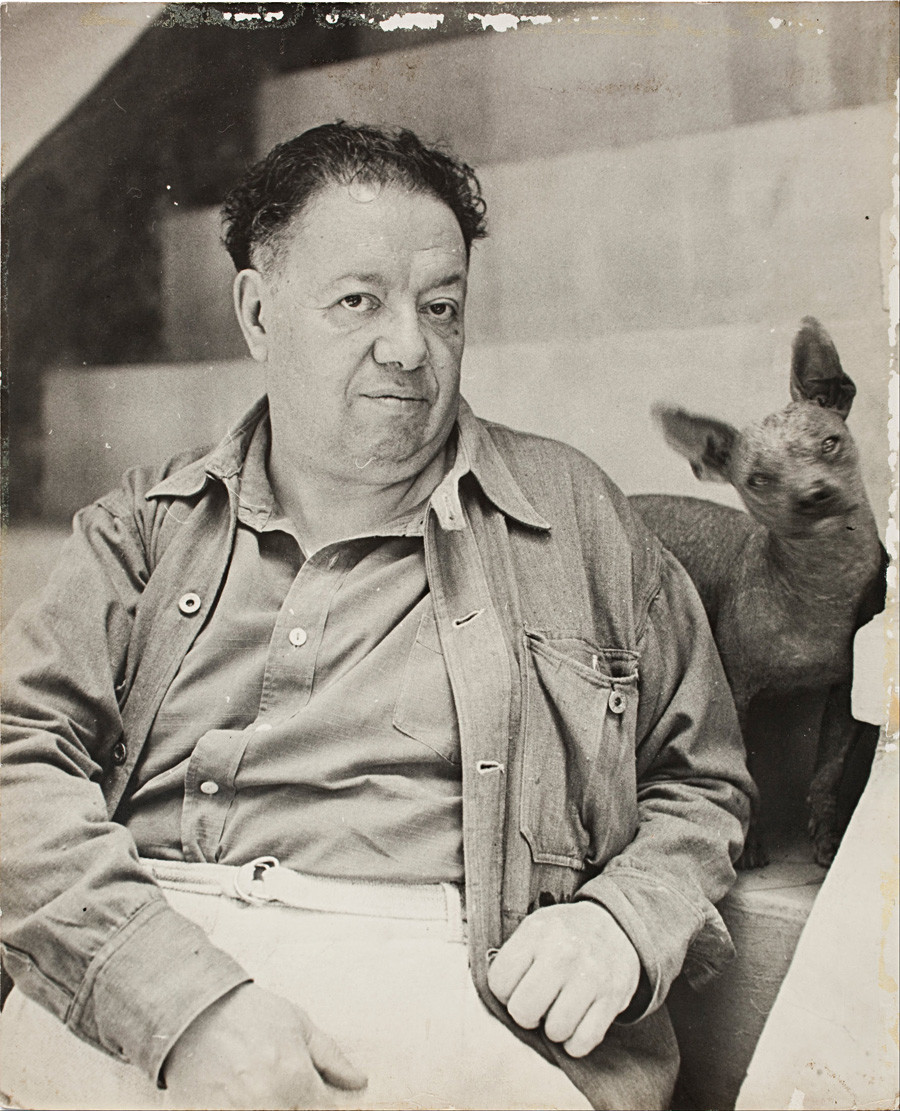 That Mexican painter, a devoted leftist, by that time had already been an international star. “He told me he doesn’t take apprentices but invited me to help him during his work – and one can learn a lot through beholding the whole process,” Arnautoff recalled. He spent two years, 1929-1931, in Mexico, working alongside Rivera.

In Mexico, under Rivera’s tutelage, Arnautoff perfected his skills at painting murals – and became a Communist, despite having fought them previously. This turnaround naturally created a lot of obstacles upon his return to San Francisco. 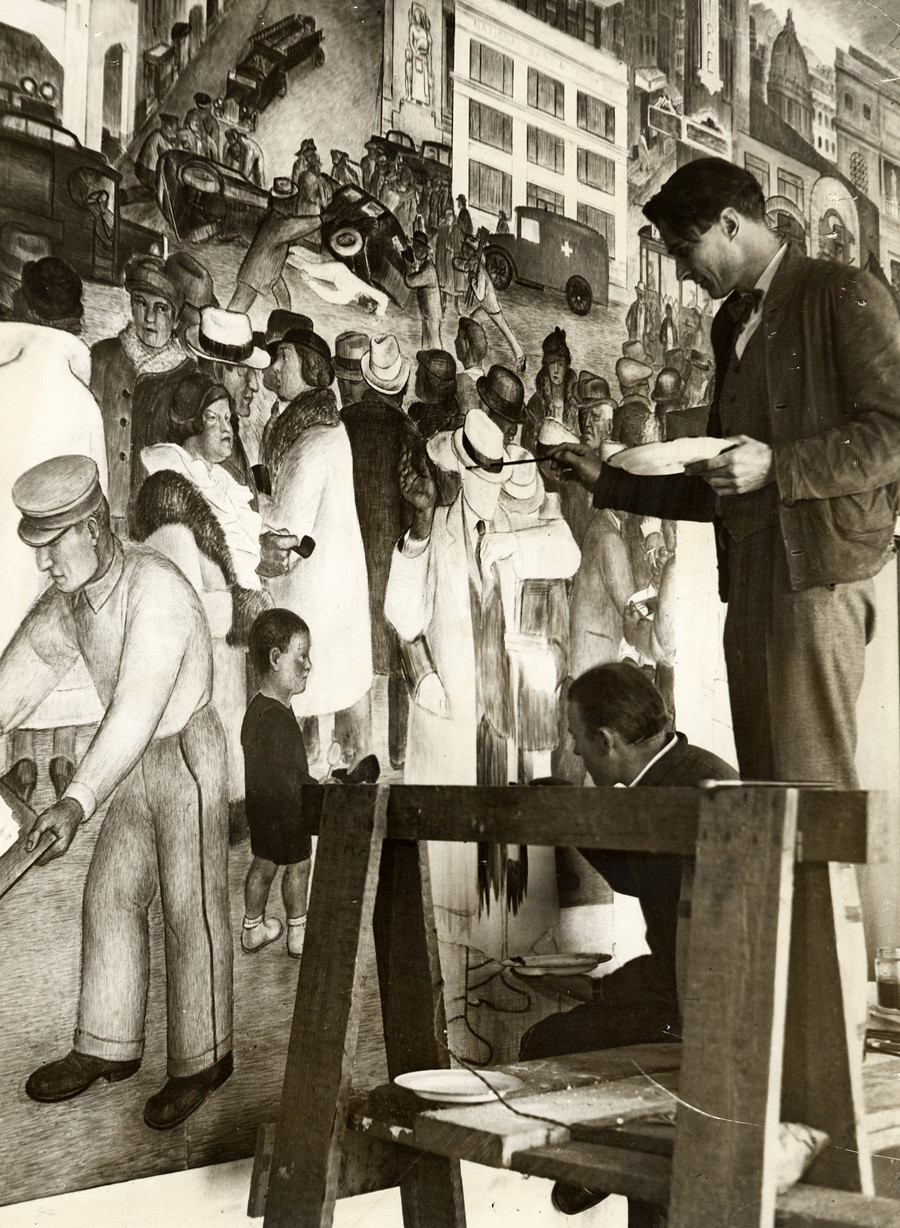 Arnautoff’s professionalism and creative power were indisputable: he created several murals in San Francisco and the Bay Area in the 1930s, which still exist today. From 1938 to 1962, he worked as a professor at Stanford, teaching art.

Generally, his academic career was as successful as his artistic one. However, his political activities were sparking a lot of controversy in the U.S.Arnautoff became an ardent supporter of the leftist cause and the USSR. And while it was considered totally okay during Roosevelt – especially with Washington and Moscow fighting together against the Axis – the Cold War had changed all that. 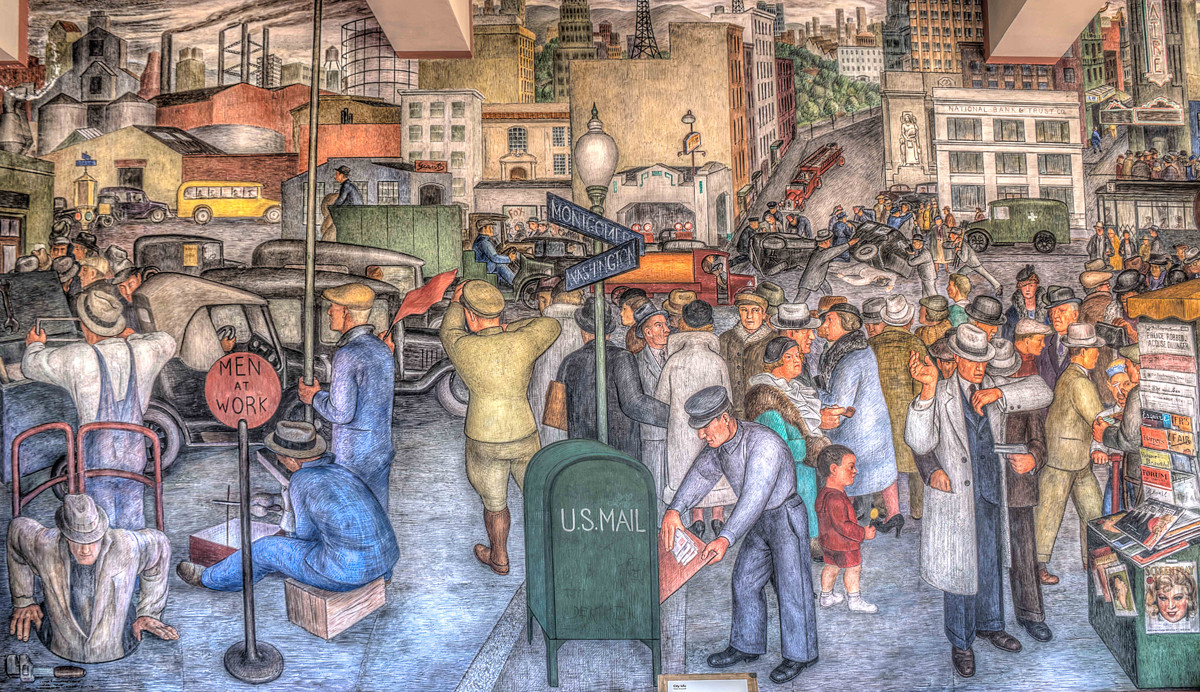 When the Second Red Scare hit, there was no way Arnautoff’s leanings were going to be ignored. The artist was interrogated by the House Un-American Activities Committee (HUAC) and by several Stanford inner committees, unwilling to keep a Communist teaching there. “No proven Communist should hold a position at Stanford,” the university’s president Wallace Sterling used to say. 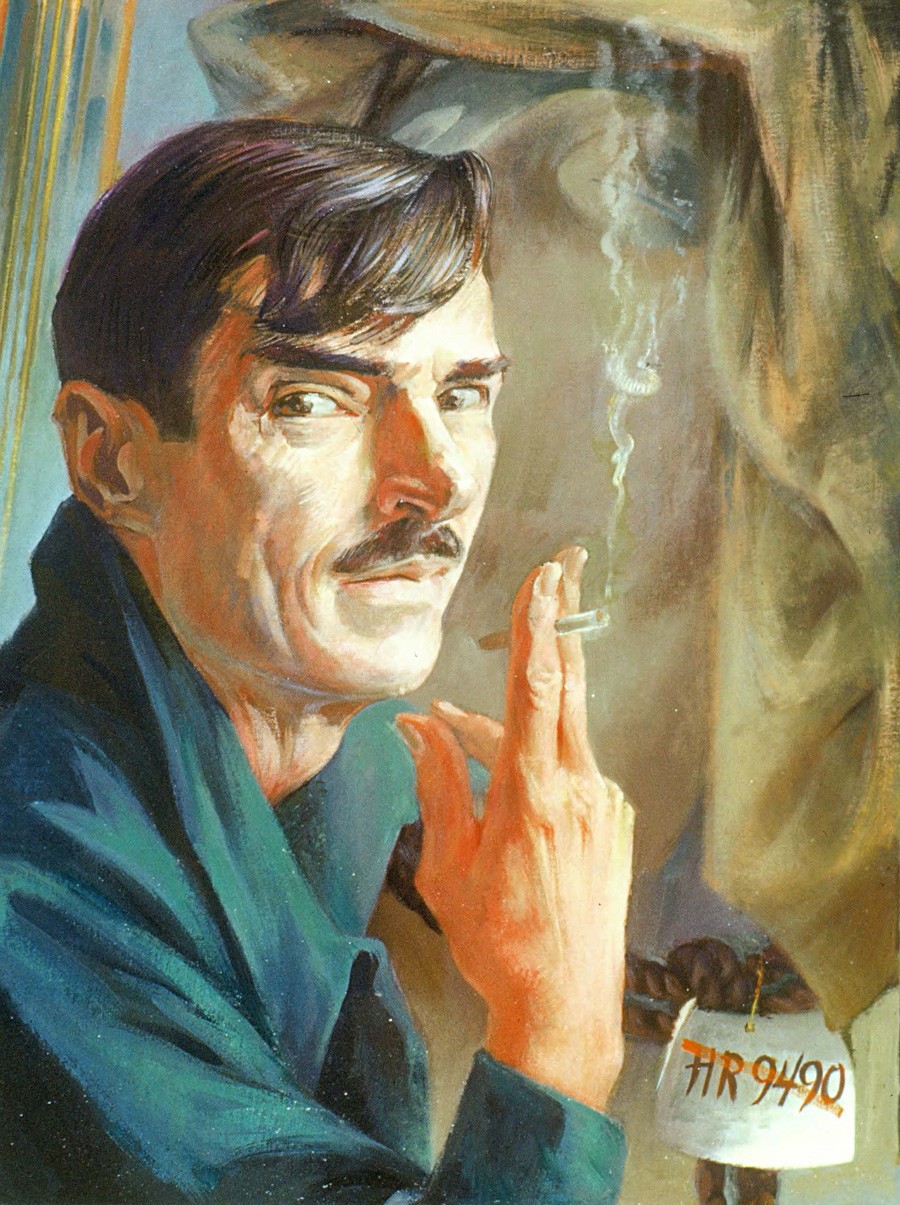 Arnautoff neither confirmed nor denied his membership in the Communist party, keeping a proud silence and bashing his opponents publically, while appealing for freedom of speech and thought. “Members of the Un-American Committee said I am a most dangerous man for the security of the United States… Do they consider an artist’s colors, brushes, crayons and pencils as murderous tools?” Arnautoff wrote. “If they do, it is a new low in right-wing thinking.” 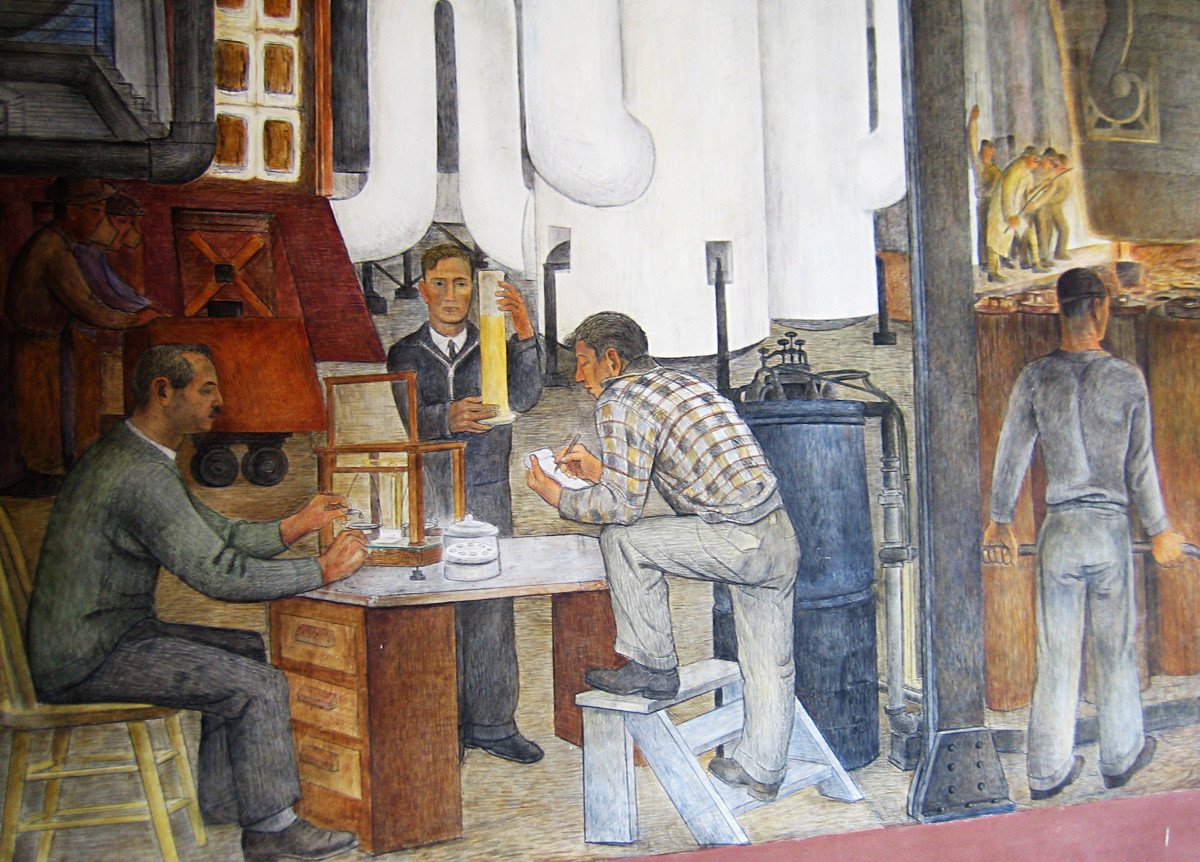 Arnautoff wasn’t guilty of anything: no evidence he actually tried spreading any political views among his students was ever discovered. He kept his job, but McCarthyism dealt a strong blow to his opinion of the  U.S. In 1963, after his wife died, Arnautoff moved to the USSR and worked there until his death in 1979. The communist artist would surely have been surprised to know that today it’s not right-wing fanatics, but American liberals, who try to erase his works from history.