Culture
Boris Egorov
These paintings are the best depictions of Russian heroism in the course of numerous wars and conflicts, as well of the horror that each war brought.

1. Vasily Vereshchagin. The Apotheosis of War (1871). Mountains of enemy heads were often left by Tamerlan’s troops during their campaigns. Underlining the horrors of war, the artist devoted this painting “to all great conquerors, past, present and to come." 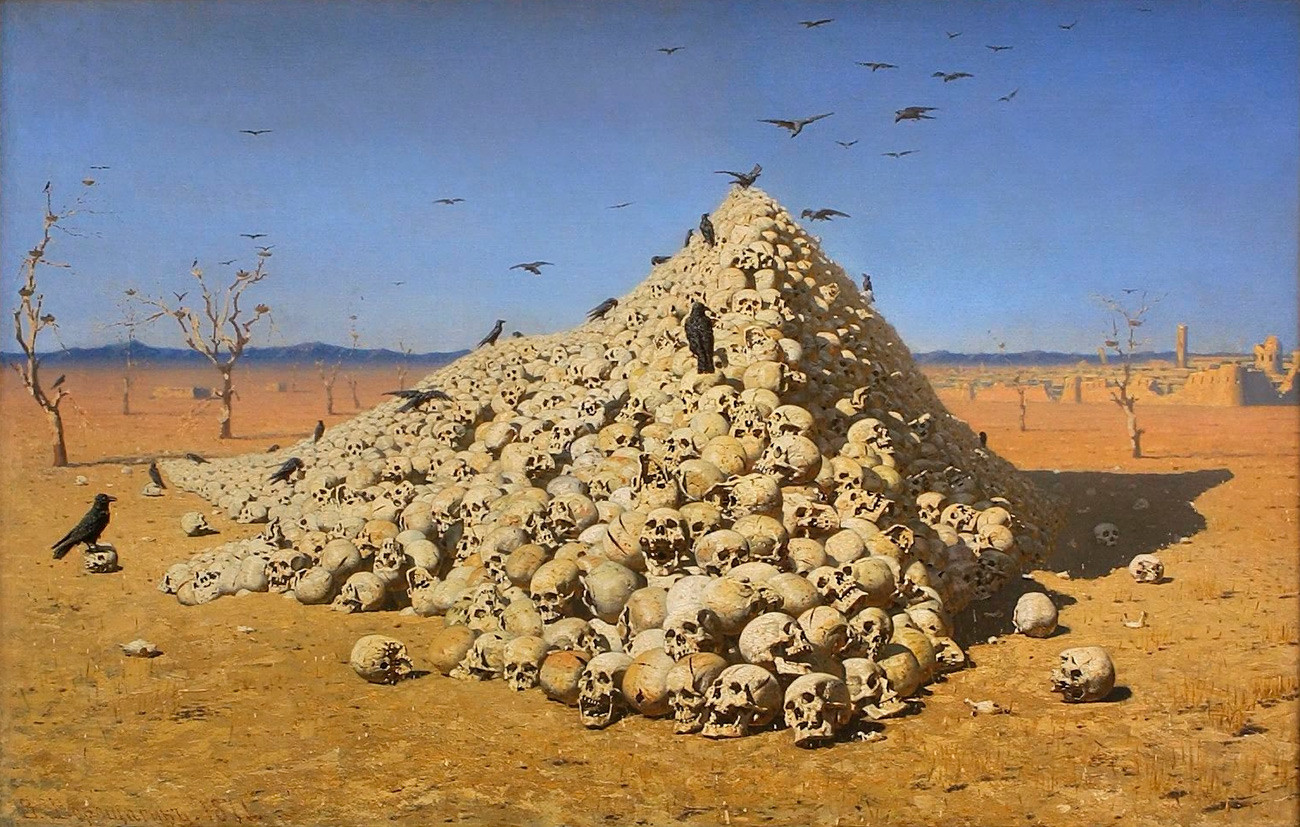 2. Pavel Ryzhenko. Kalka (1996). Some 14 years prior to the Mongol invasion, Russians felt the power of future invaders at the Battle of Kalka. After this crushing defeat, the captured Russian princes were dumped in a shallow ditch and then covered with wooden floors on which the winners organized a feast. The victims died of suffocation with all their bones broken.

3. Mikhail Avilov. Duel of Peresvet with Chelubey on Kulikovo Field (1943). According to legend, the famous Battle of Kulikovo (1380) between the Mongols and Russians was preceded by a duel of the opposing sides’ best warriors. Both died in the process. 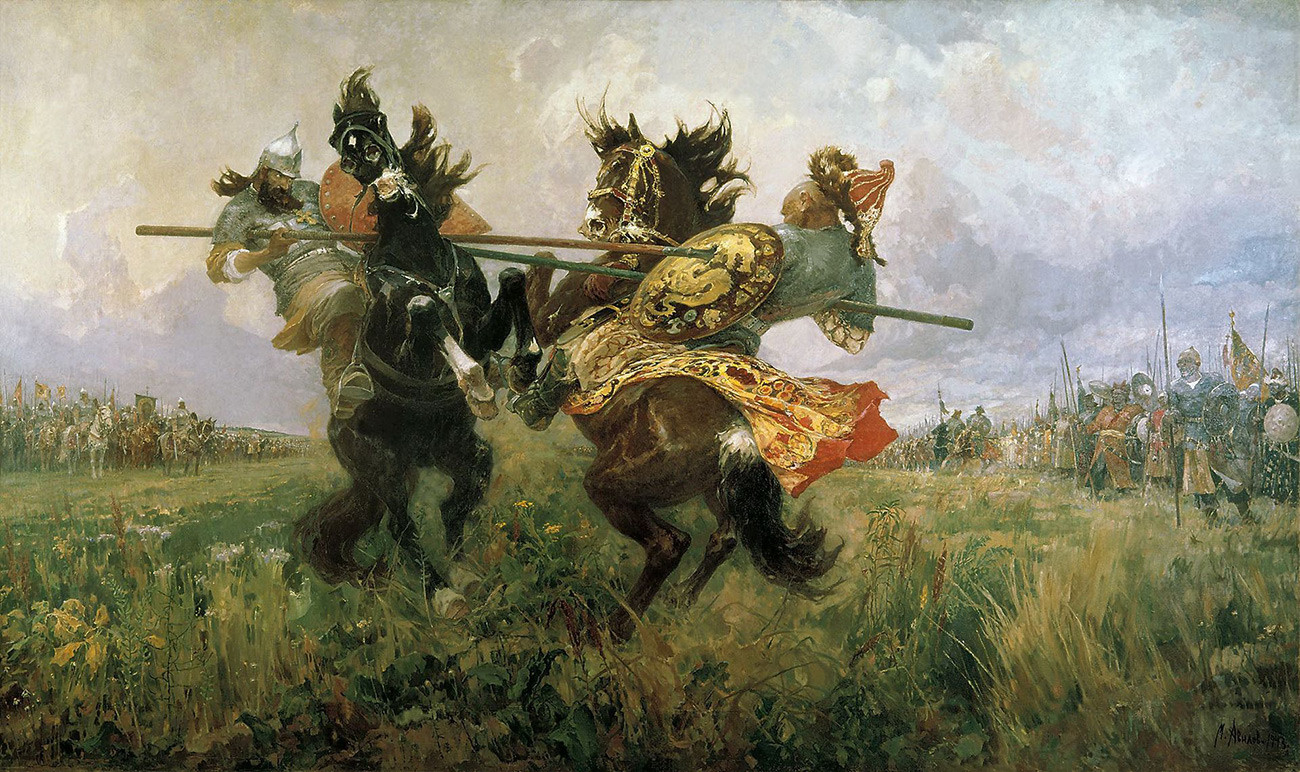 4. Vasily Surikov. Conquest of Siberia by Yermak (1895). The painting depicts the decisive battle between the troops of Cossack Ataman Yermak and the Khanate of Sibir in 1582. Yermak started the conquest of Siberia on behalf of the Russian state. 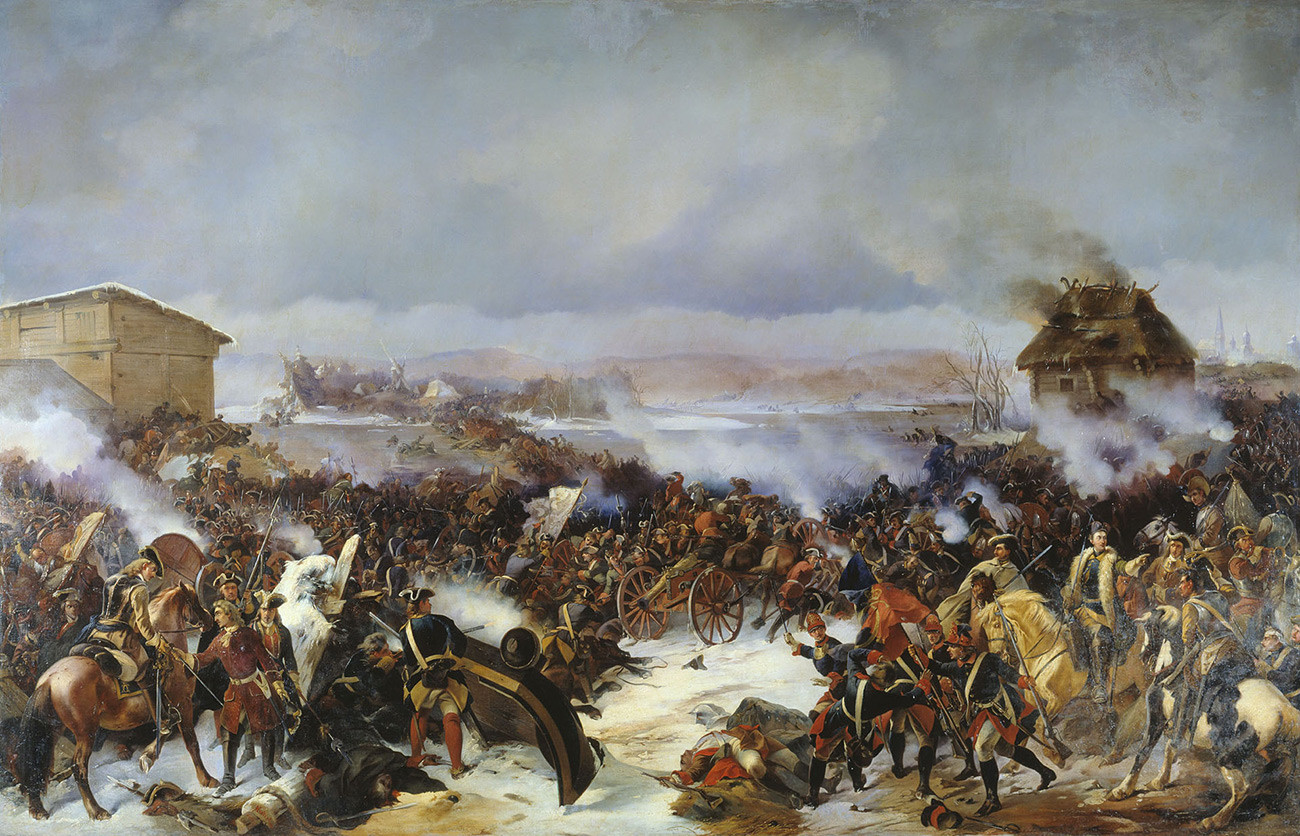 6. Vasily Surikov. Suvorov Crossing the Alps in 1799 (1899). The painting depicts one of the most daring episodes of the Swiss campaign conducted by troops under the command of General Alexander Suvorov, the goal of which was destroying the French army occupying Switzerland. 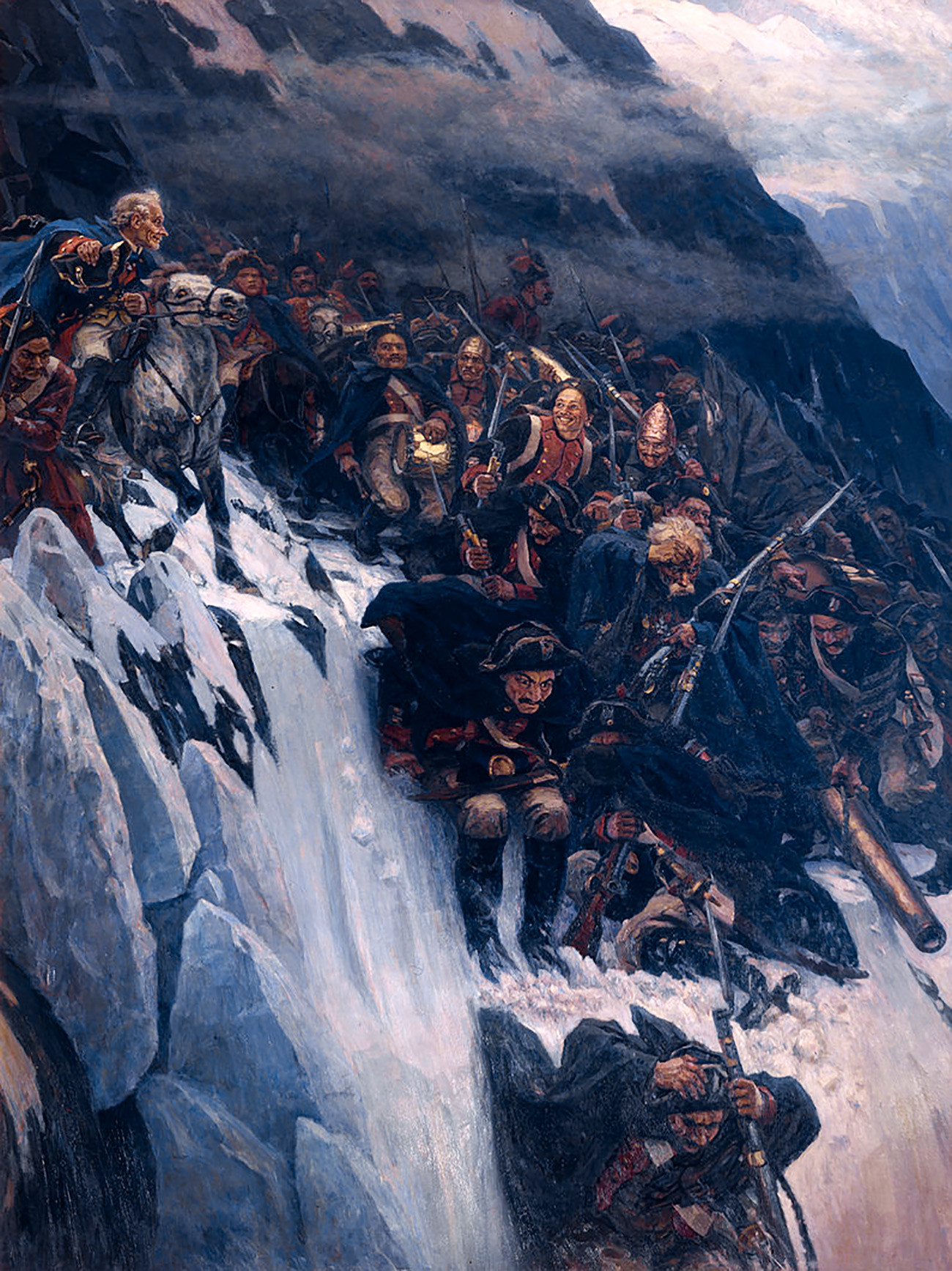 7. Bogdan Willewalde. Feat of Cavalry Regiment at the Battle of Austerlitz in 1805 (1884). This was also known as the Battle of Three Emperors: Napoleon, Alexander I and Francis II. With 65,000 troops, the French emperor defeated the Russo-Austrian army of almost 84,000 men. Defeat at Austerlitz shocked Russian society, which had considered its army invincible.

8. Vasily Vereshchagin. Napoleon at Borodino (1897). The painting is the first in the artist’s series of 20 paintings dedicated to the Grand Army’s Russian campaign. 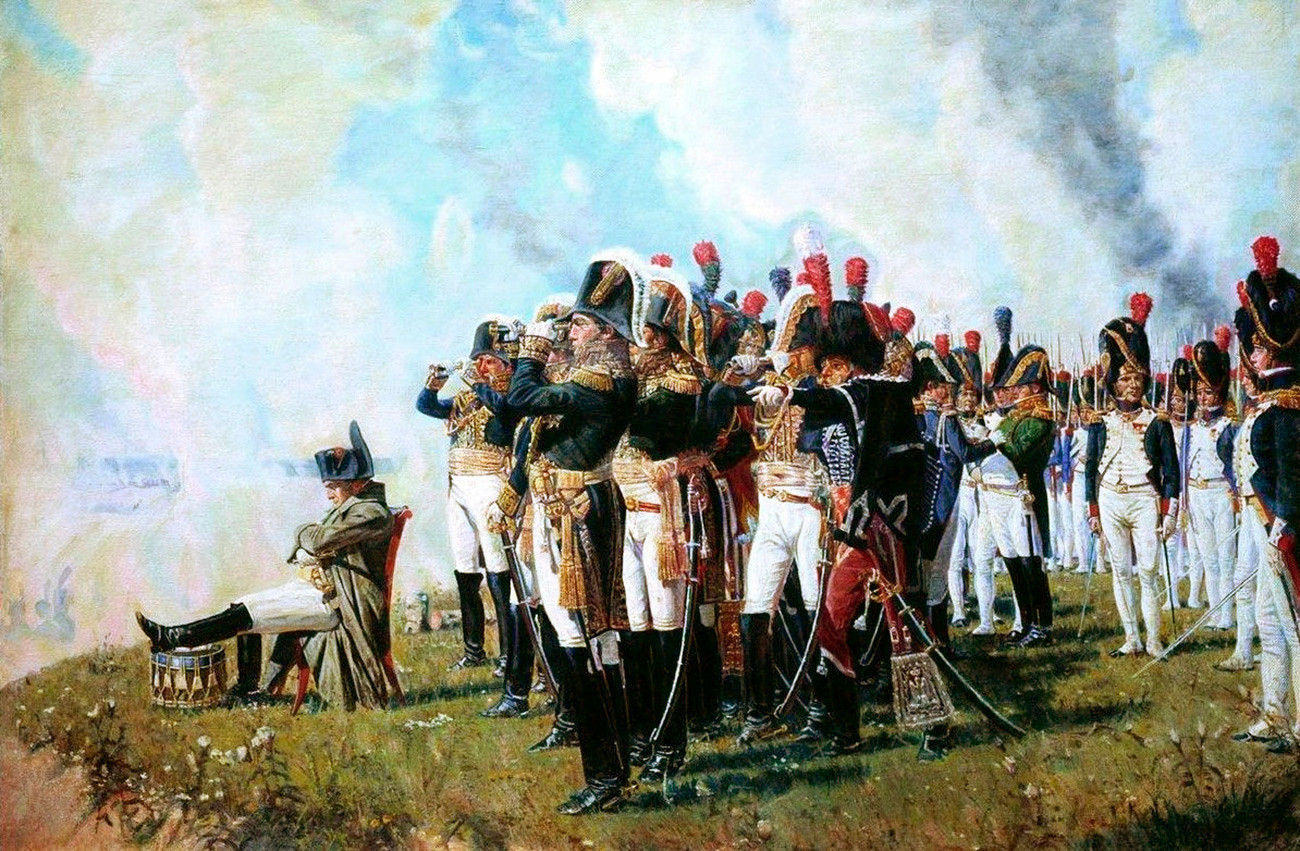 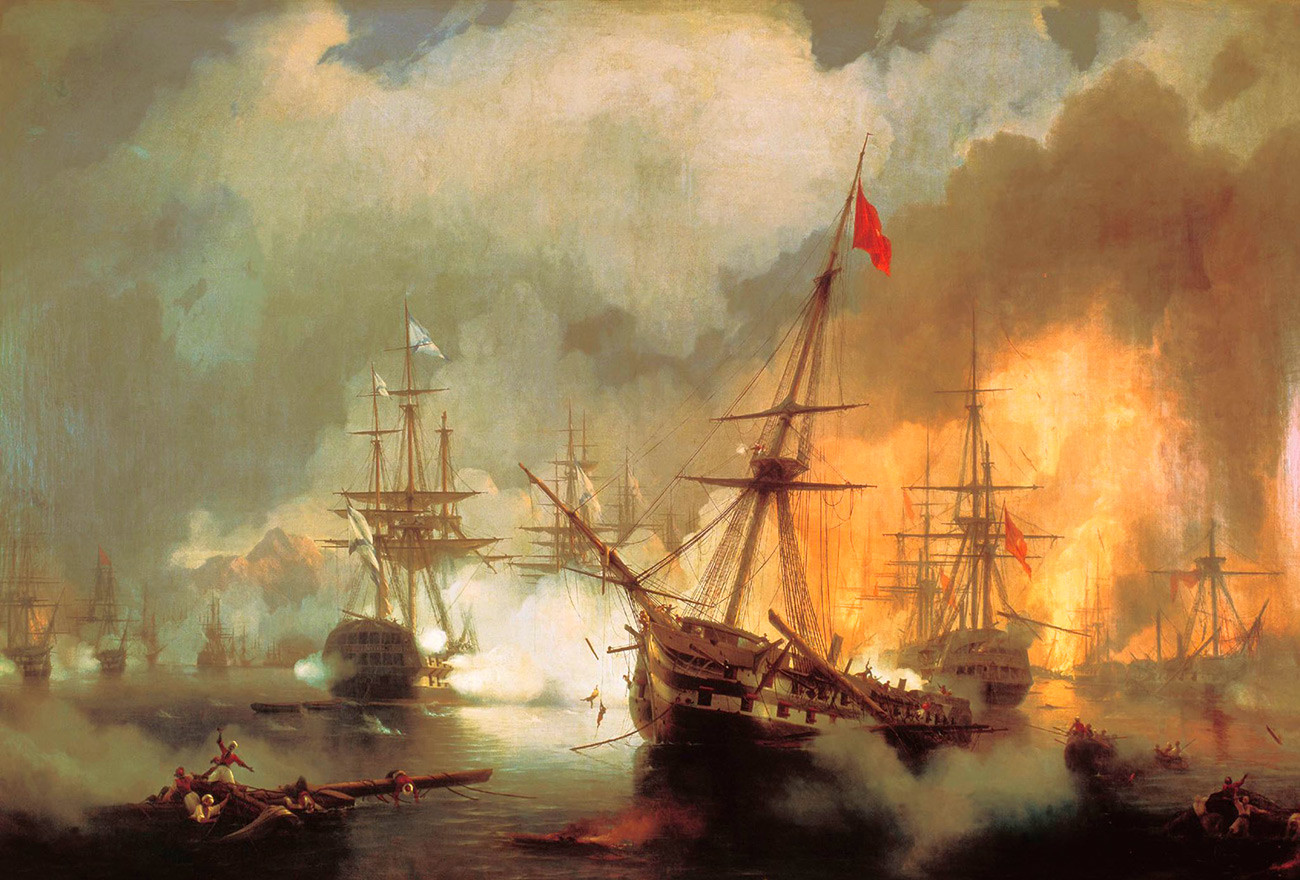 10. Vasily Vereshchagin. Mortally Wounded (1873). The painting depicts the events of Russian expansion into Central Asia in the second half of the 19th century. 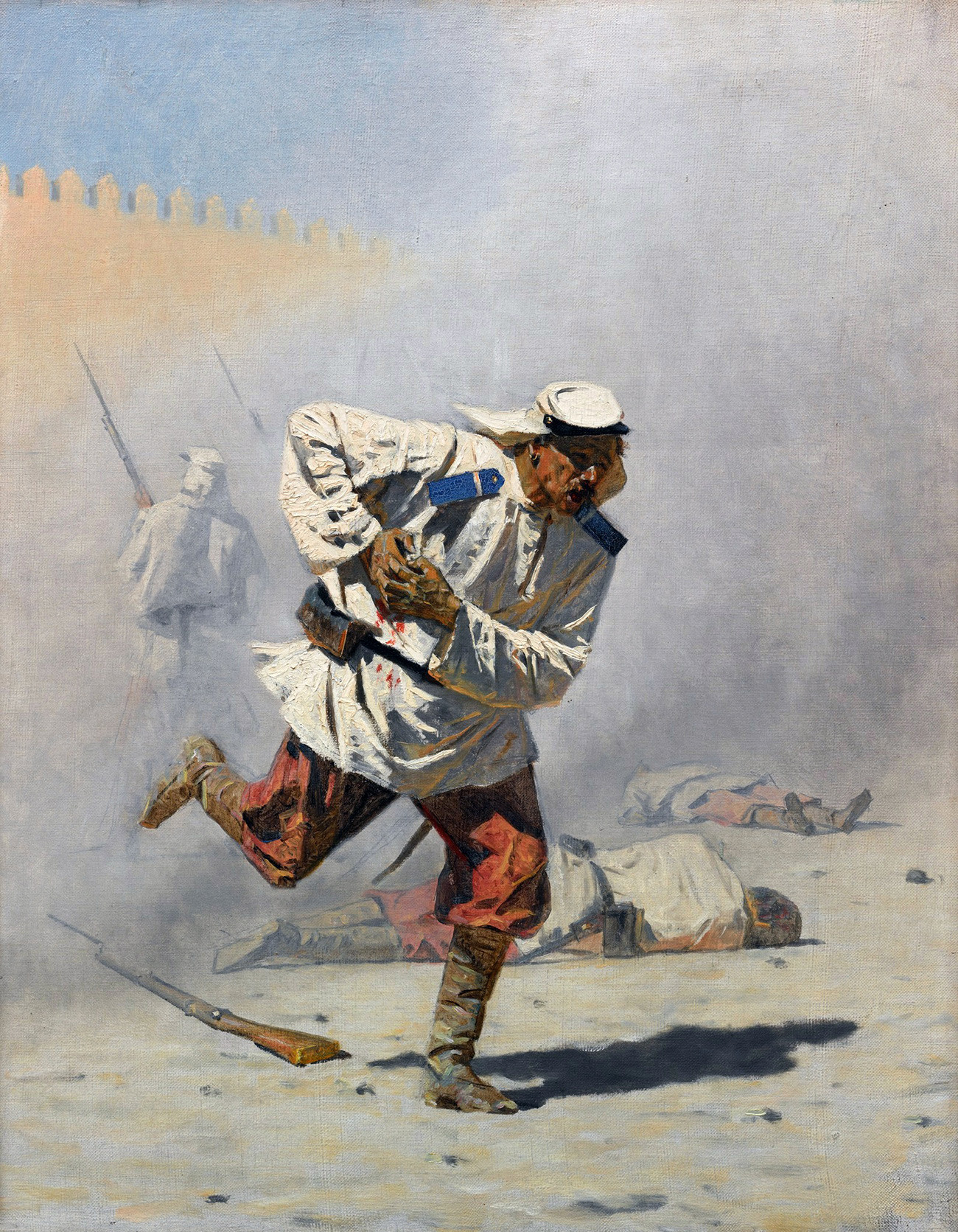 11. Vasily Vereshchagin. Defeated. Requiem (1879). The artist, who was present, drew the battlefield after the Battle of Telish on October 3, 1877, during the Russo-Turkish War (1877-1878). Russian victory brought independence to Romania, Serbia and Montenegro. 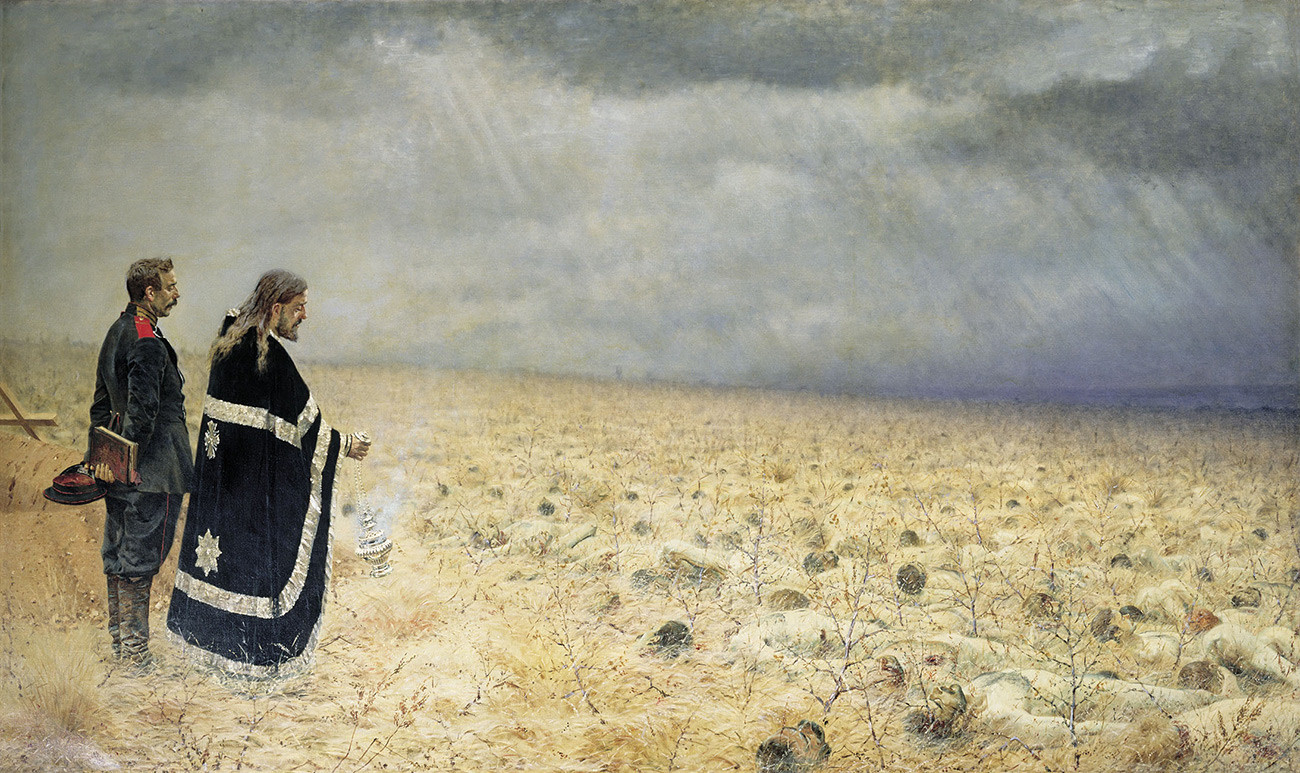 12. Nikolai Dmitryev-Orenburgsky. Siege of Plevna: Capture Redoubt (1885). The five-month Siege of Plevna by the Russian army was a key event in the Russo-Turkish War (1877-1878). After the Ottoman capitulation, the fate of the conflict was practically decided. 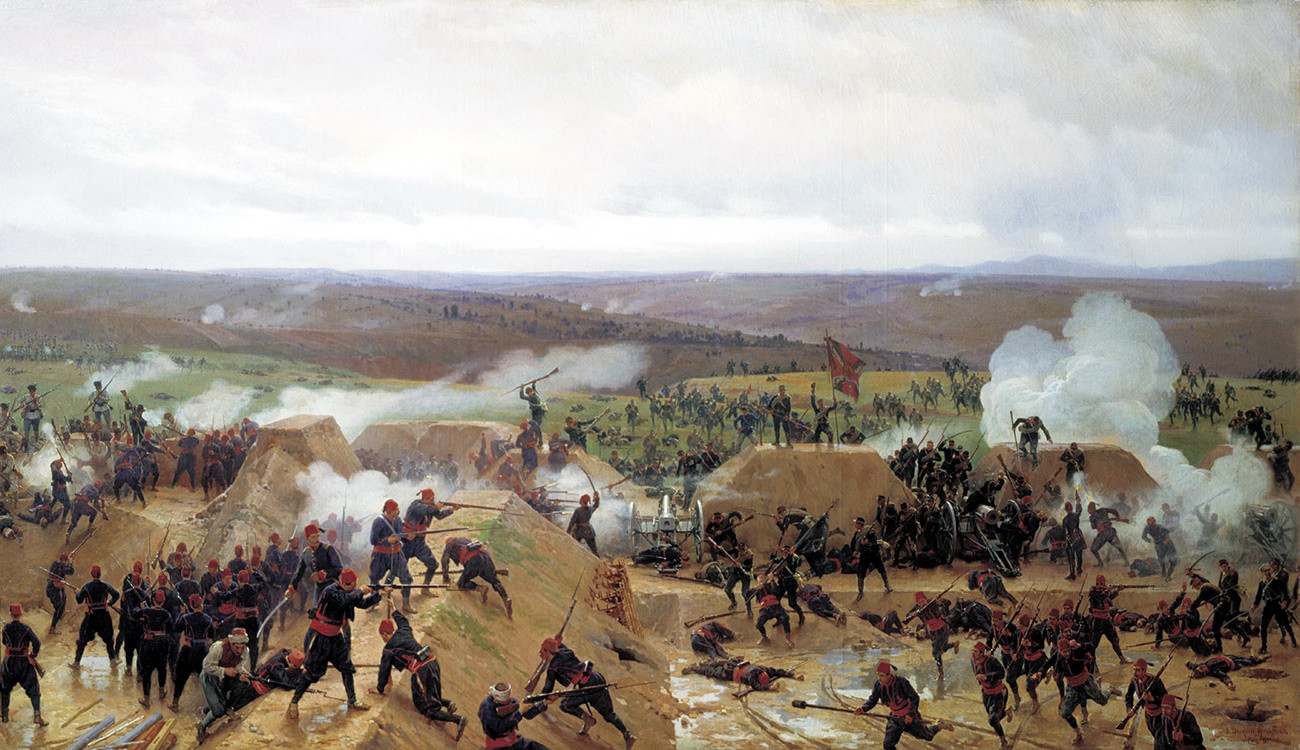 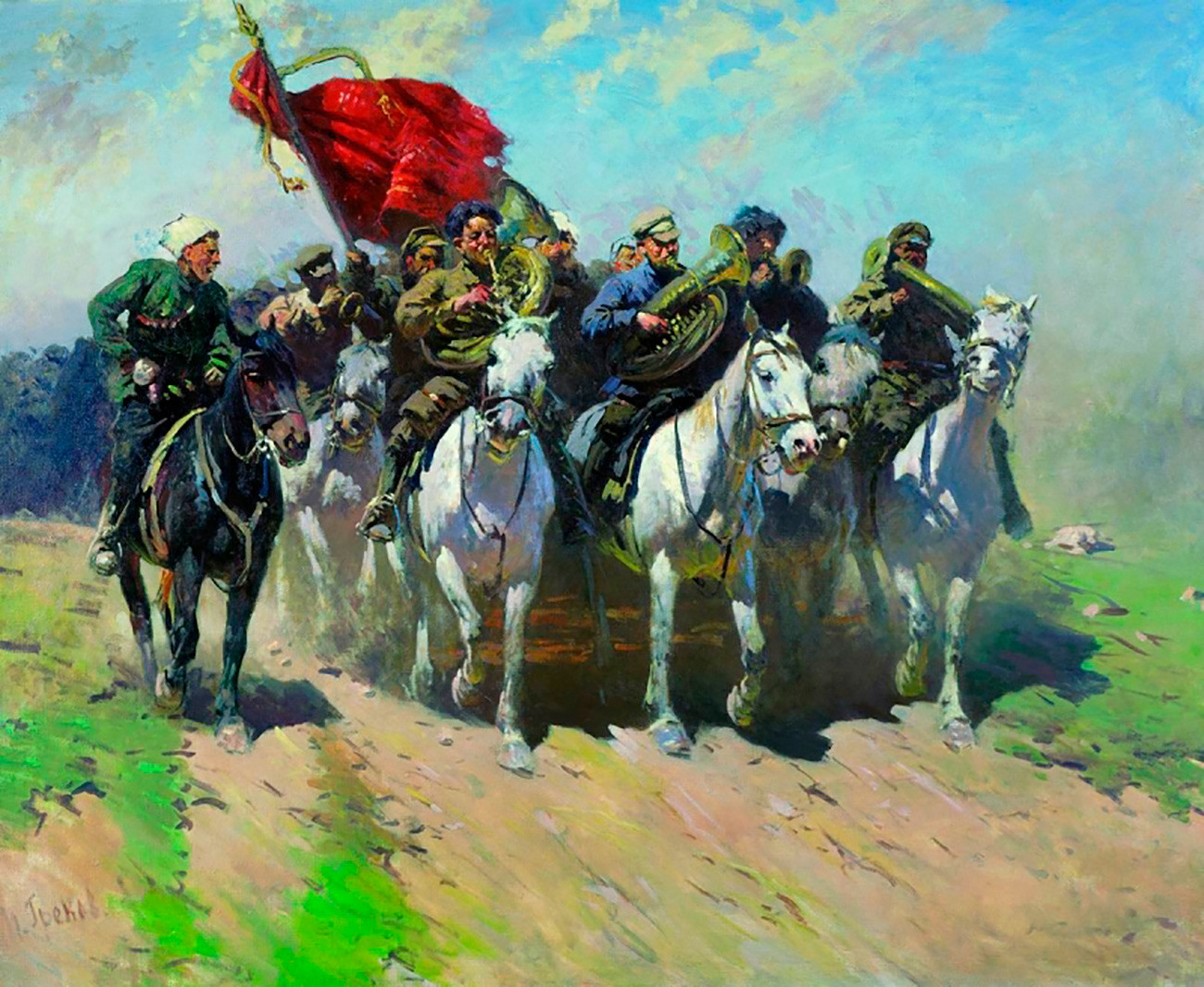 14. Aleksandr Deyneka. The Defense of Sevastopol (1942). Deyneka’s painting isn’t a realistic depiction of the Siege of Sevastopol in 1942, but rather, a symbolic image of the clash of two implacable forces: a faceless dark mass of invaders versus Soviet knights - sailors in dazzling white costumes. 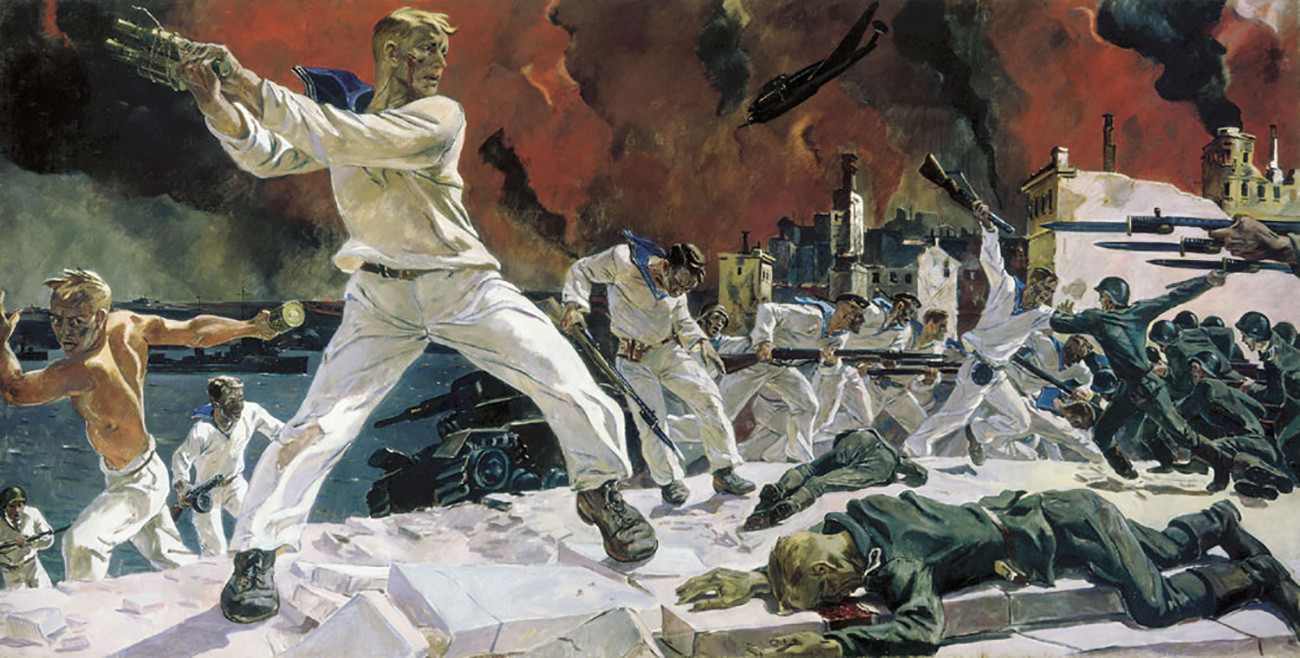 15. Pyotr Krivonogov. Victory (1948). It took over a week for Soviet troops, supported by the Polish People's Army, to take the city. Clashes over the Reichstag continued even after Hitler's suicide on April 30. The last major source of resistance in Berlin were suppressed on May 2, but armed confrontations with fanatical Nazis took place even on May 7. 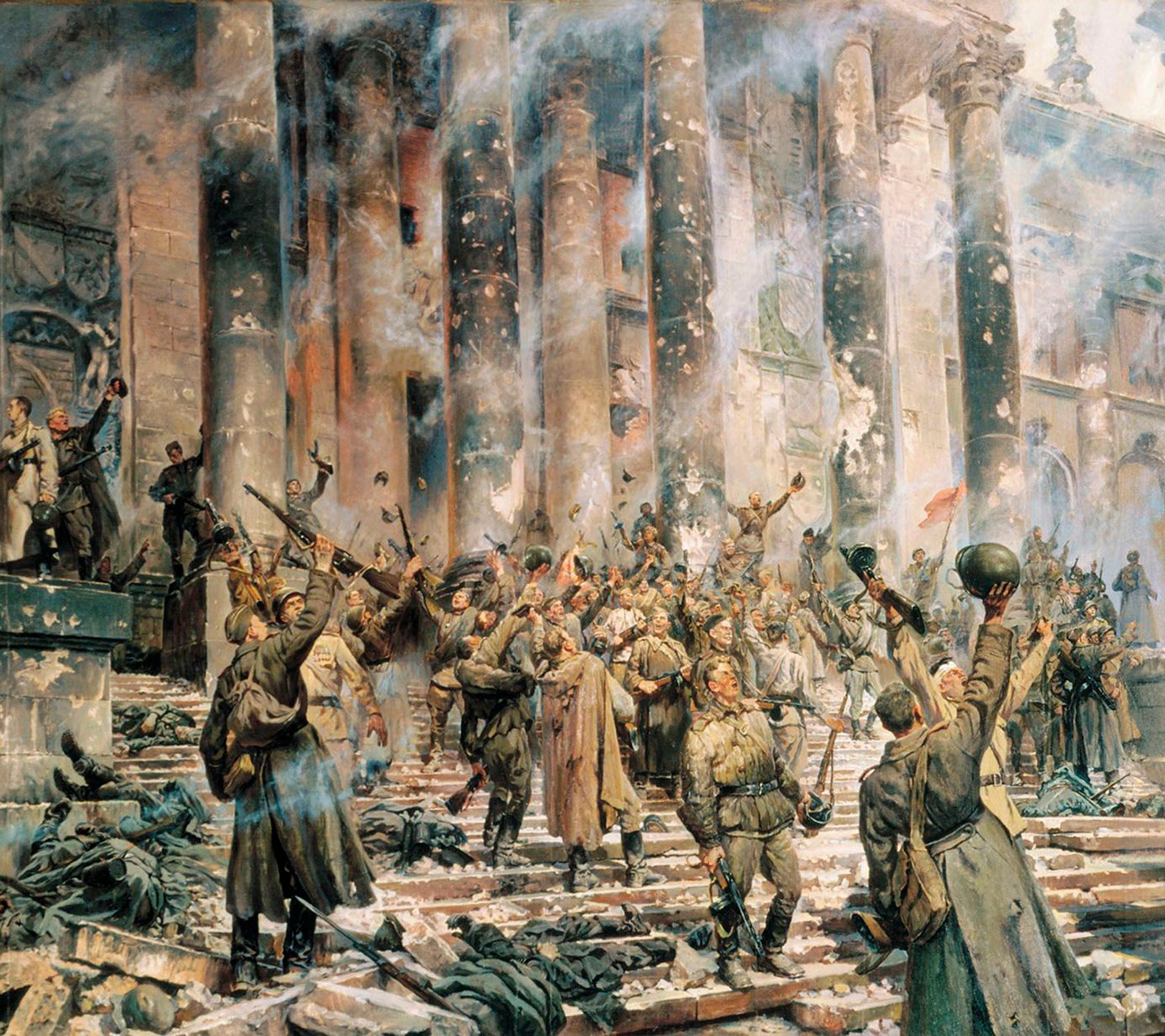