Does Boris Yeltsin look like a bear in this portrait? 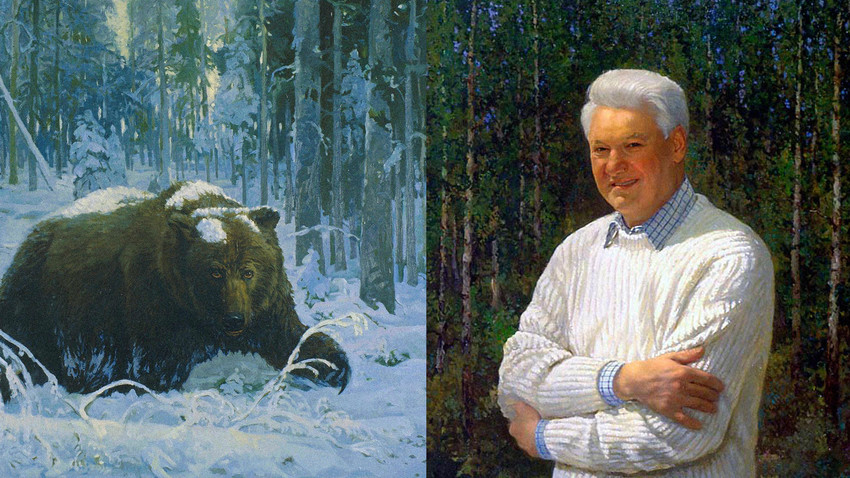 Vladimir Sokovnin
Artist Vladimir Sokovnin shares the story behind his portrait of President Boris Yeltsin: who actually sat for it, what mystical consequences Yeltsin's handshake could have had and what the 'bear' was all about.

Vladimir Sokovnin: I was commissioned to paint Yeltsin's portrait quite by chance – at least, I was not seeking it. After the 1996 election, the president's team got some new people, in particular, press secretary Sergey Yastrzhembsky. He wanted to create a new image of the president for the media, which at the time were extremely critical of Yeltsin. Yastrzhembsky told me: you paint nice portraits, why don't you paint a portrait of Boris Yeltsin? 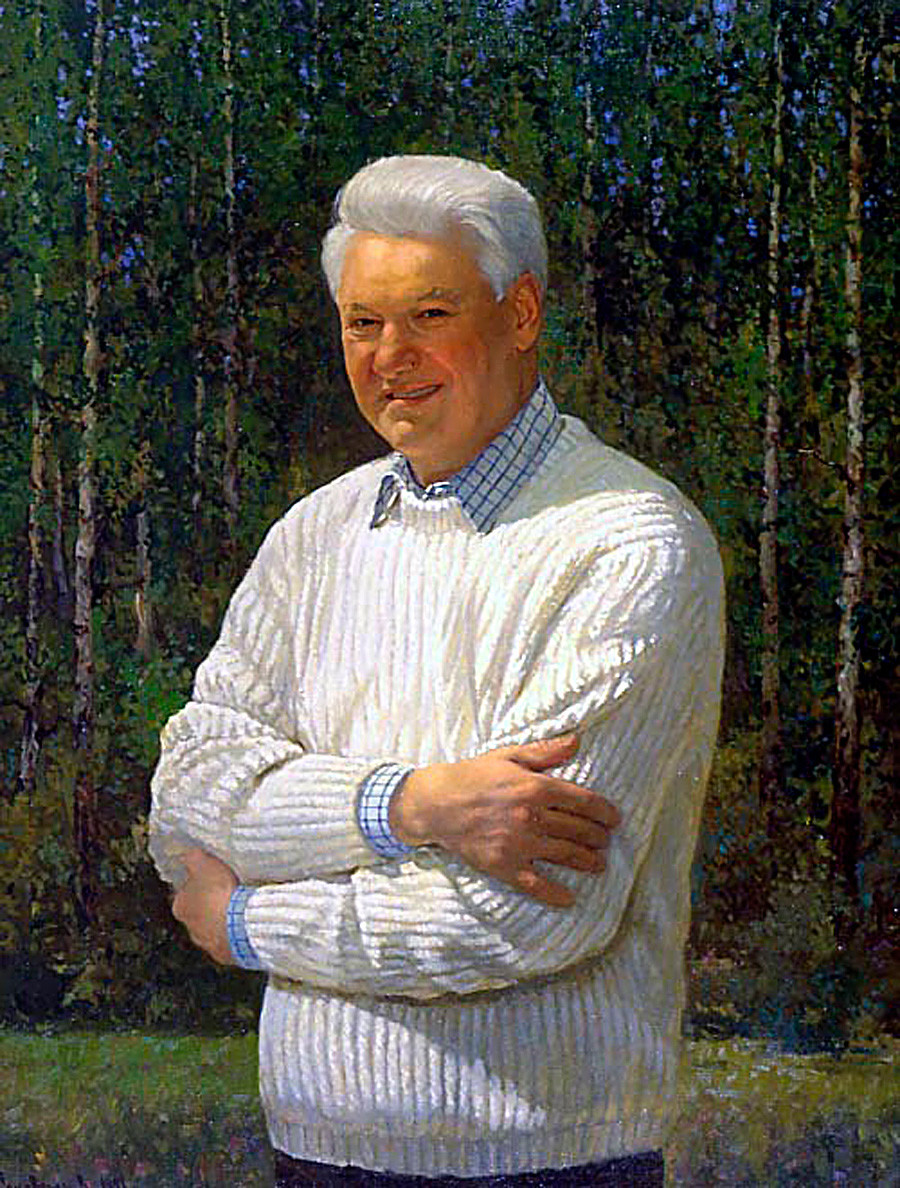 I have always liked Boris Nikolayevich for his charisma, his wild energy, which could be very affecting. I had previously designed a trophy and diploma for the media presidential prize created by Yeltsin. It was then that I met the president in person several times. And I remember a cursed story linked to our first handshake.

At a reception in the Kremlin, I was taken to Yeltsin to be introduced to him. When he shook my hand, I was very pleased and proud of myself. In high spirits from the occasion and the champagne I had drunk, I left the reception and went back to my car, which was parked in Vasilyevsky Spusk square, not far from the Kremlin. I got into my Niva and as I was closing the door, my hand got jammed in it. All the nails were smashed, there was blood everywhere… I spent 20 years treating my hand after that injury. It was only recently that I finally managed to get rid of the fungus. 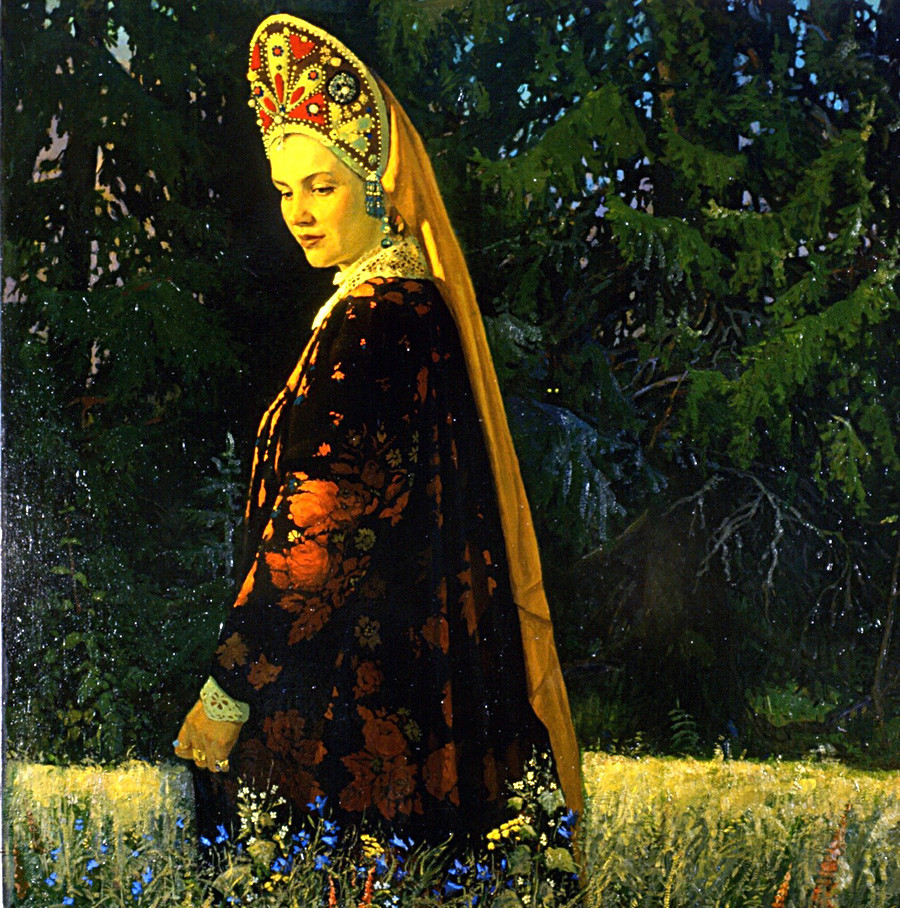 Yeltsin did not sit for his portrait: I was painting it from my drawings and sketches and from his photographs. Of course, it is nice when a person sits for their portrait in person, but putting together a picture this way is fun, too. He was an unruly man and I liked it about him. He absolutely hated posing for photographs. I asked his private photographers why they had not made his official photographs, had not decorated his study accordingly. They replied, “Everything has been prepared for a long time, but he refuses, says, 'I won't do it' and that's that. Even [Yeltsin's daughter] Tatyana Borisovna could not talk him into it.” 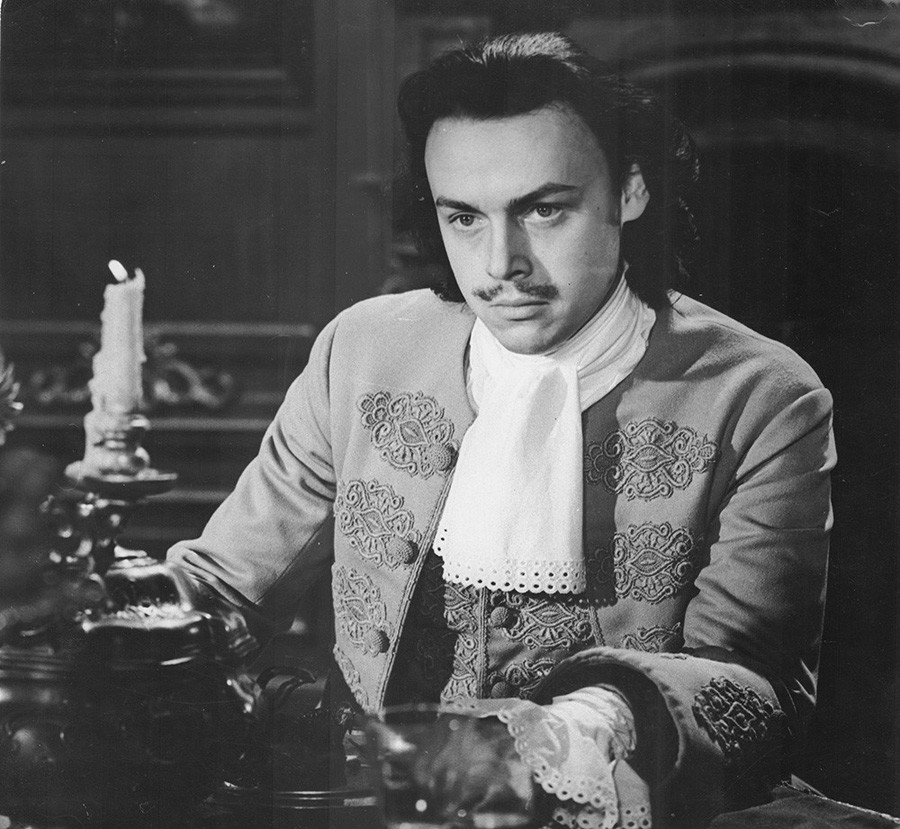 Dmitry Zolotukhin as Peter the Great

I based Yeltsin's figure on a wonderful actor and friend from my childhood, Dmitry Zolotukhin: he played Peter the Great in Peter's Youth and Young Russia. He looks like a real hero! And he sat for many of my artist friends' portraits of various heroes. But still, we had to find a typical Yeltsin posture, and we found it: Yeltsin usually tried to hide, not to show his injured hand.

The white sweater was not my idea: Yeltsin had a sweater like that and he had been photographed in a white sweater. Though there was an allusion there too: to the Soviet film Circus, famous actor  [first name] Stolyarov is depicted marching across Red Square in a white sweater, with red banners flapping behind him – essentially portraying an image of an epic Russian hero, of mythical, bogatyr strength… and anyway, I did not want to paint the president in a suit. 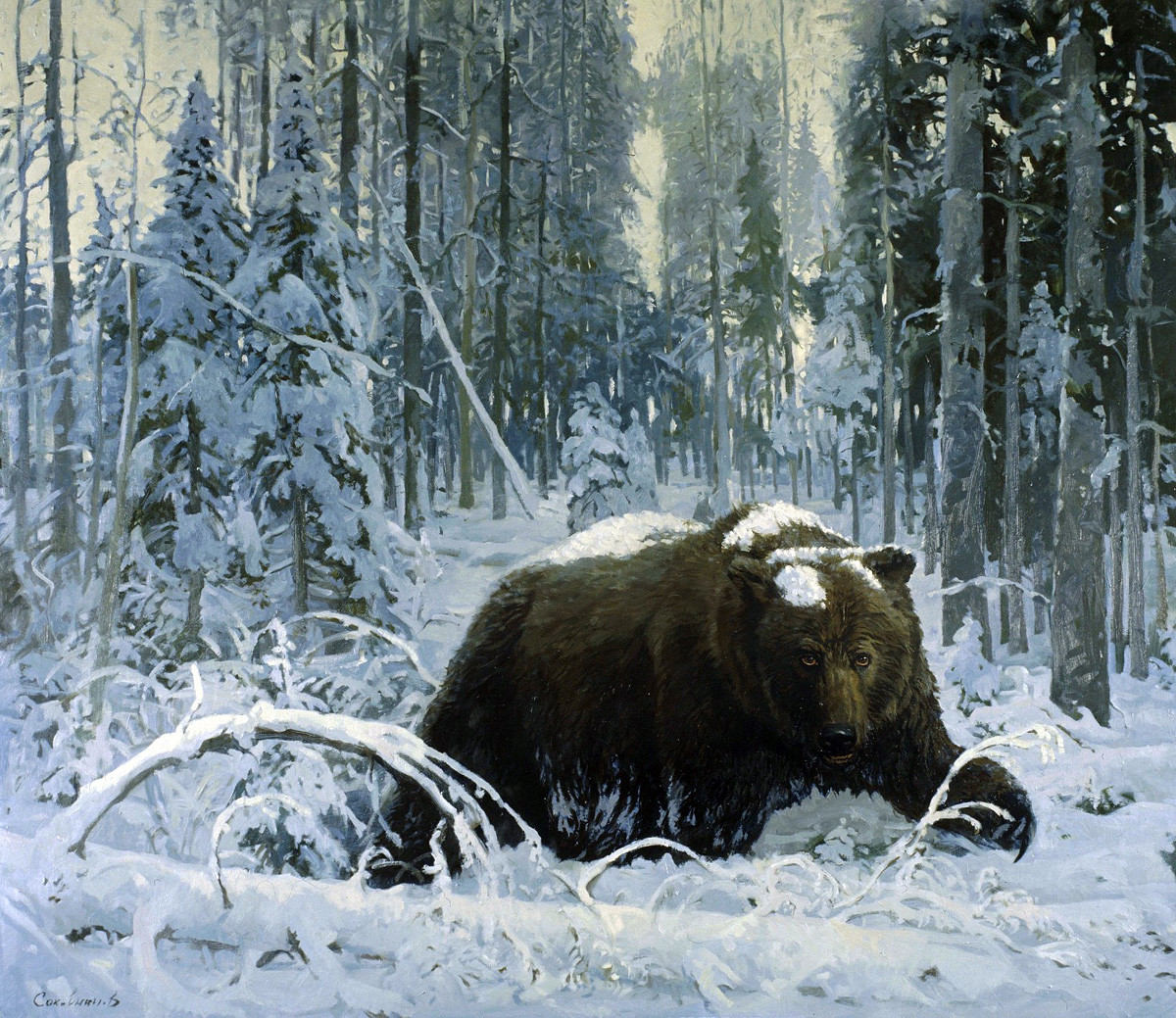 I worked on the portrait in an old studio in downtown Moscow. It so happened that at the same time I was also painting a bear emerging from its lair. A friend of mine pointed out that the bear and Boris Nikolayevich had a similar look in their eyes, which was not intentional! But I thought it was as it should be, for Yeltsin indeed had an inexplicable mythical charisma, like a bear.

I completed the portrait and brought it to the Kremlin. The handover turned into a full-fledged protocol event. When I brought the portrait, I was approached by several people in suits with briefcases in their hands. They told me to go for a walk for a couple of hours. Then they spent about three hours examining the portrait for any poison or powder, checked it and scanned it in every conceivable way: everything that the head of state would come in contact with had to be checked. Both Yeltsin and his wife Naina Iosifovna liked the portrait and it still remains with the president's family. 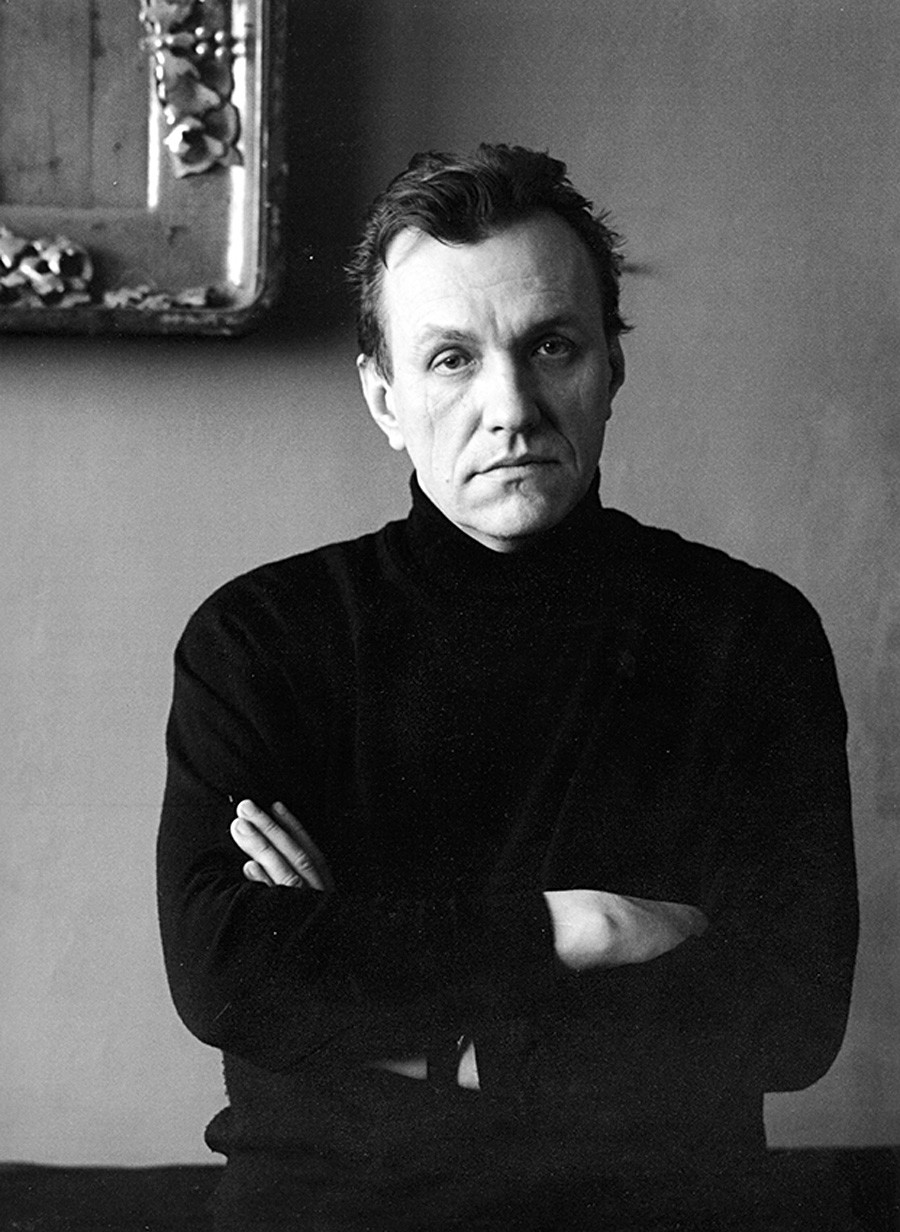