12 depictions of Christ in Russian art

Culture
Russia Beyond
Biblical subjects crop up repeatedly in the work of Russian artists of all schools. Even those who focused on ordinary folk, from fishermen to children, were fascinated by Christ the man. 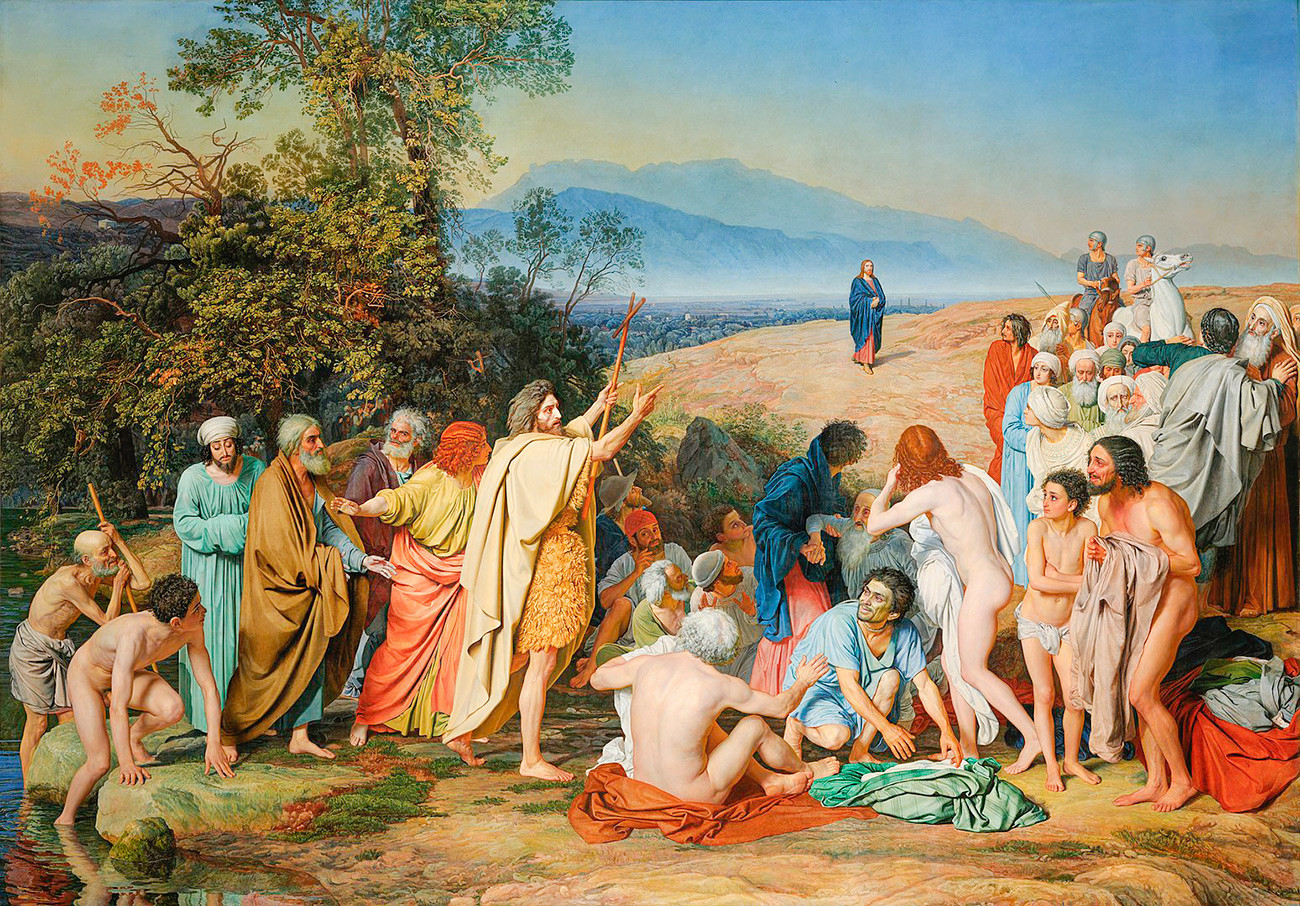 The artist worked on this picture for 20 years. Its scale (5.4×7.5 m) made it too large for the Tretyakov Gallery, so a small annex had to be built to accommodate it. 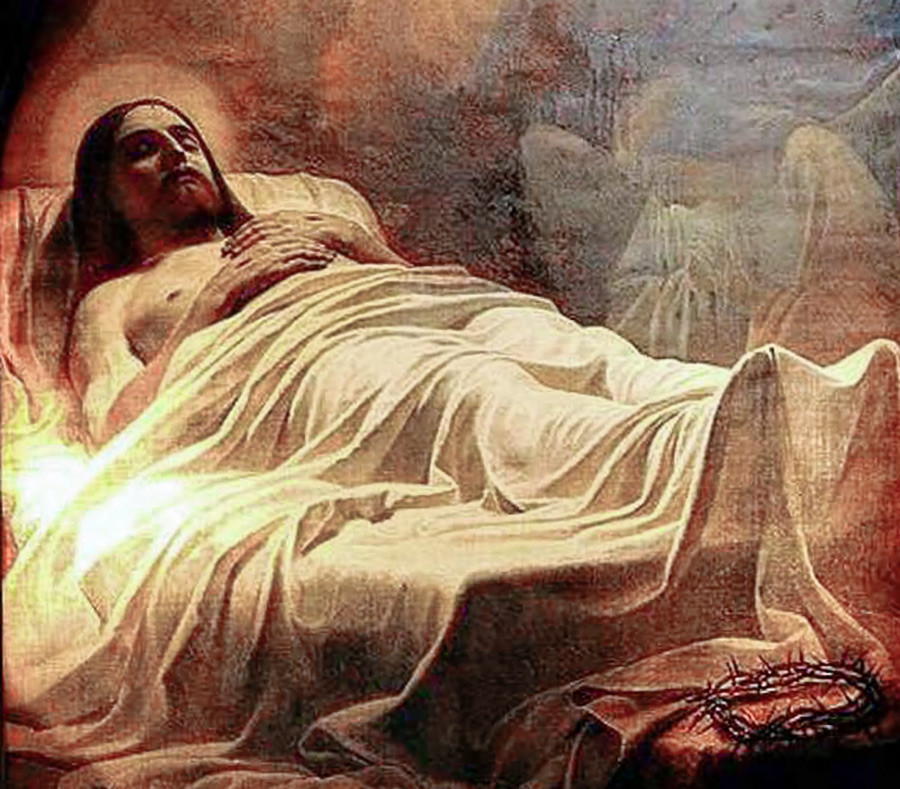 This picture has a bit of backstory. Bryullov was commissioned to paint it for a Russian count, who took it to Germany. After the owner’s death, the unsigned work was transferred to an Orthodox church in Europe, where no one realized it was a masterpiece. In 2002 the church sold the painting to a group of collectors who took it to the Russian Museum for analysis. Bryullov’s authorship was duly identified, whereupon the FSB confiscated the valuable work of art. True, Russia’s Supreme Court later ordered that it be returned to its buyers. 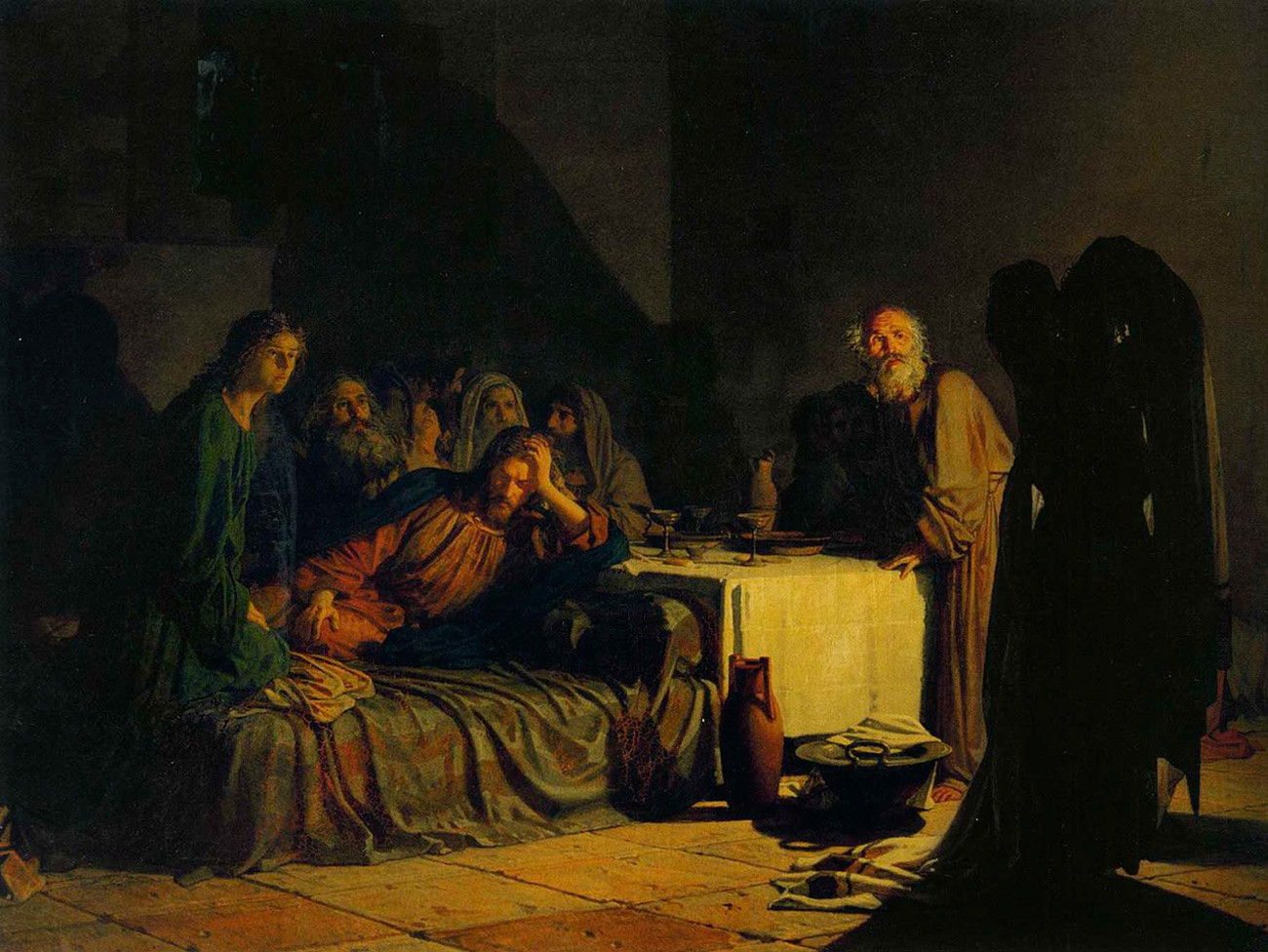 Nikolay Ge painted many religious subjects, in particular his Passion Cycle, which tells about the last days of Christ’s life, crucifixion, and resurrection. The artist departs from tradition in his depiction of the Last Supper. Critics slated Ge for stretching credulity, but the painting was bought by Emperor Alexander II, and is today housed in the Russian Museum in St Petersburg. 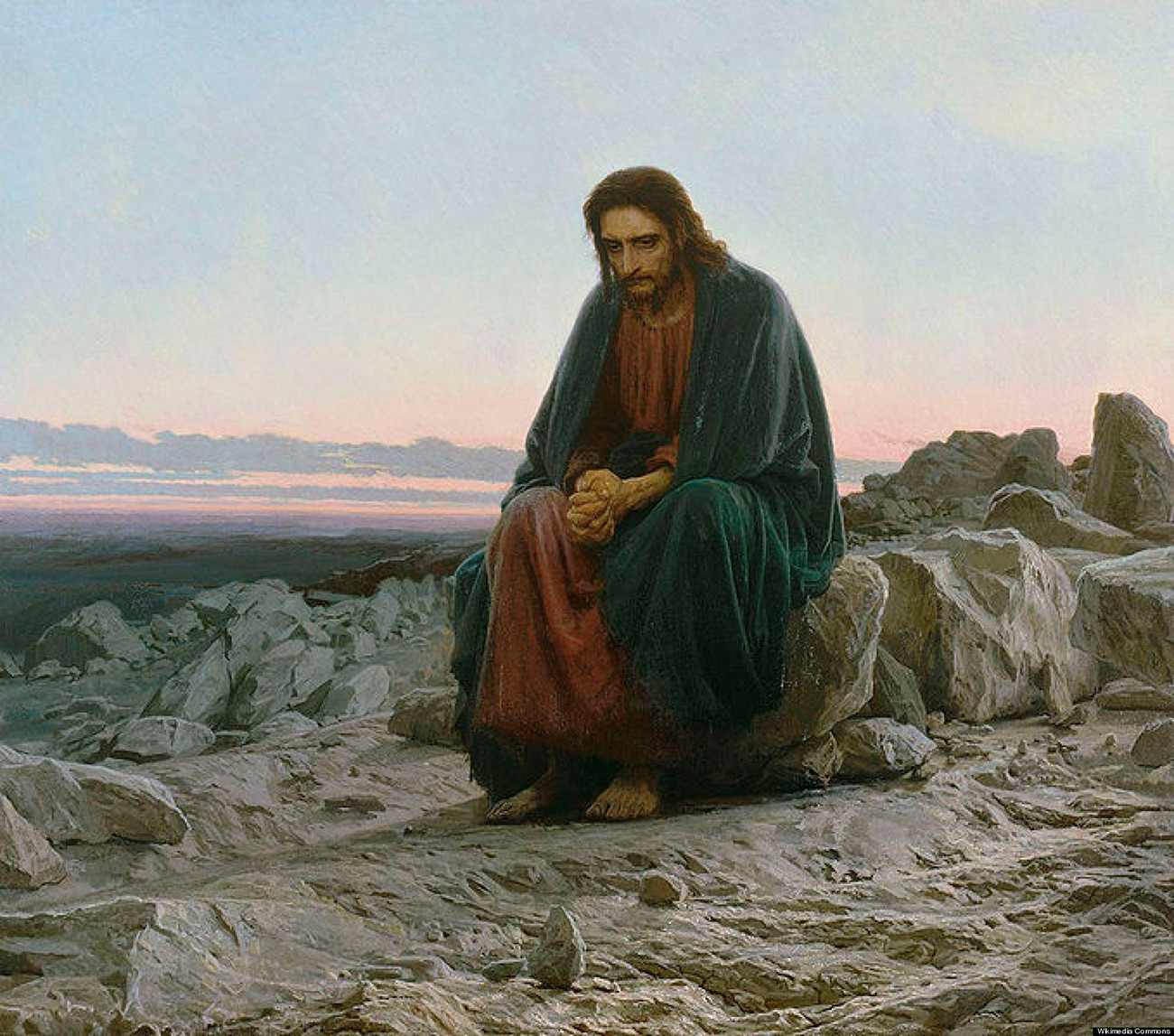 One of the most famous images of Christ in Russian art, and one of the first attempts to portray him as a real person. Here he is not a saint tempted by evil forces, but an ordinary man full of doubts. Art critics pay special attention to the center of the picture: Christ’s hands pensively clasped. 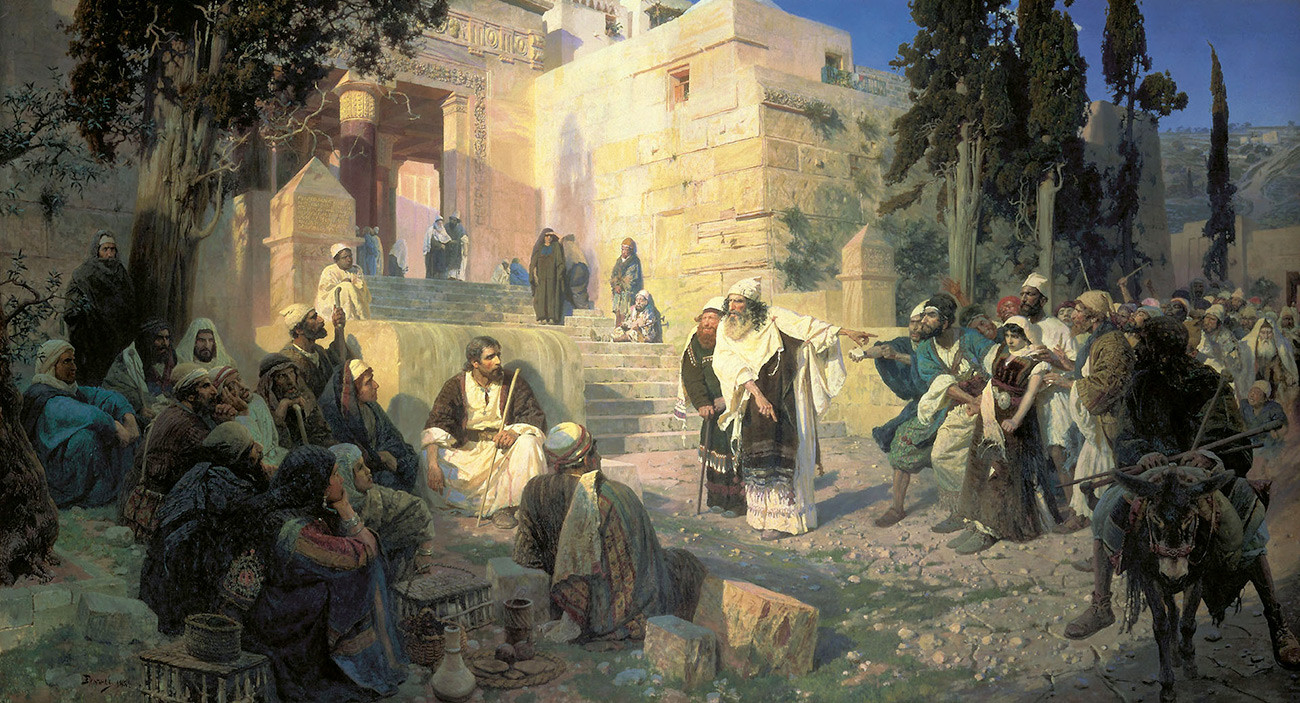 Polenov considered this picture to be his life’s work. To faithfully depict both Christ himself and the landscapes of Judea, the artist traveled around the Middle East for several years and made dozens of studies and sketches. His main aim was to show Christ as an ordinary person. 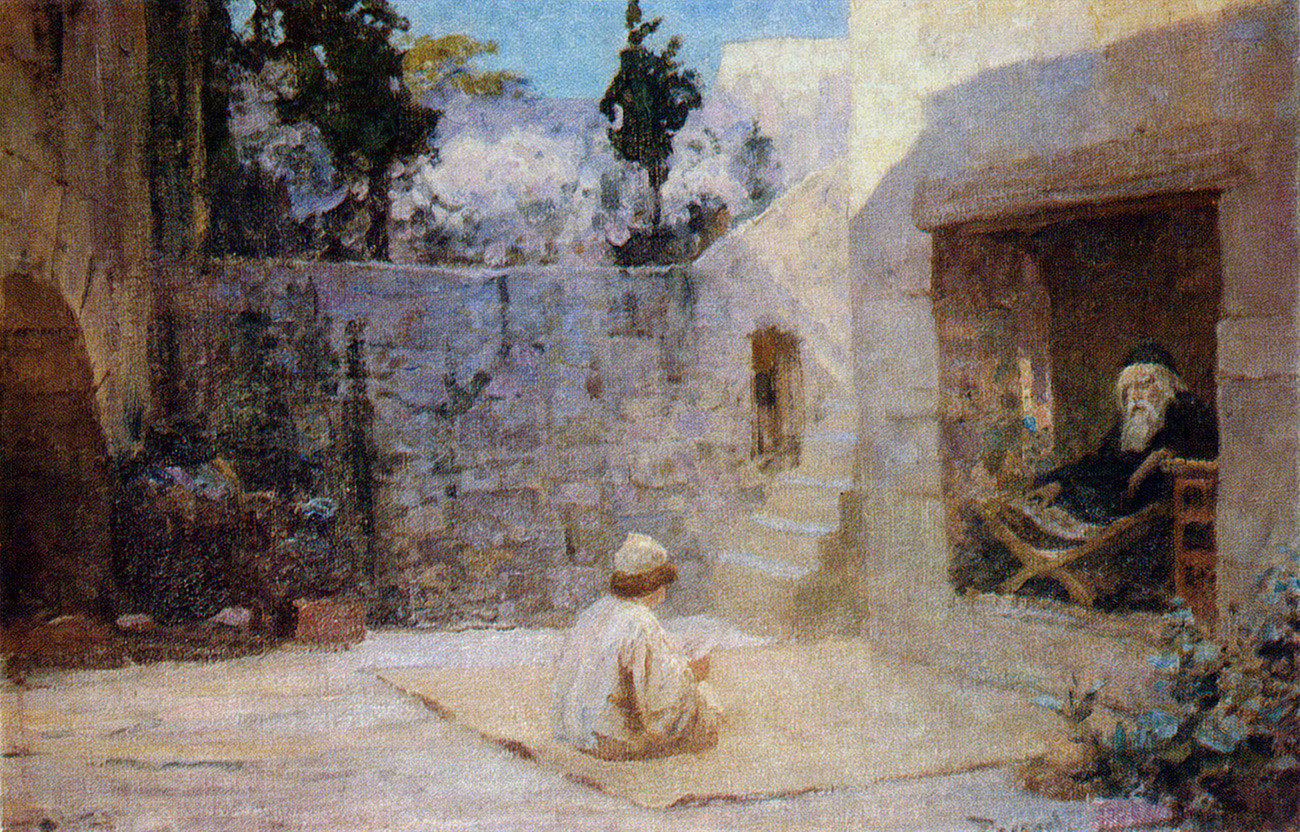 Polenov went on to create the series of paintings From the Life of Christ, which traces Jesus’ path from boyhood, acquiring wisdom from elders, to the Sermon on the Mount, when he himself begins to teach. 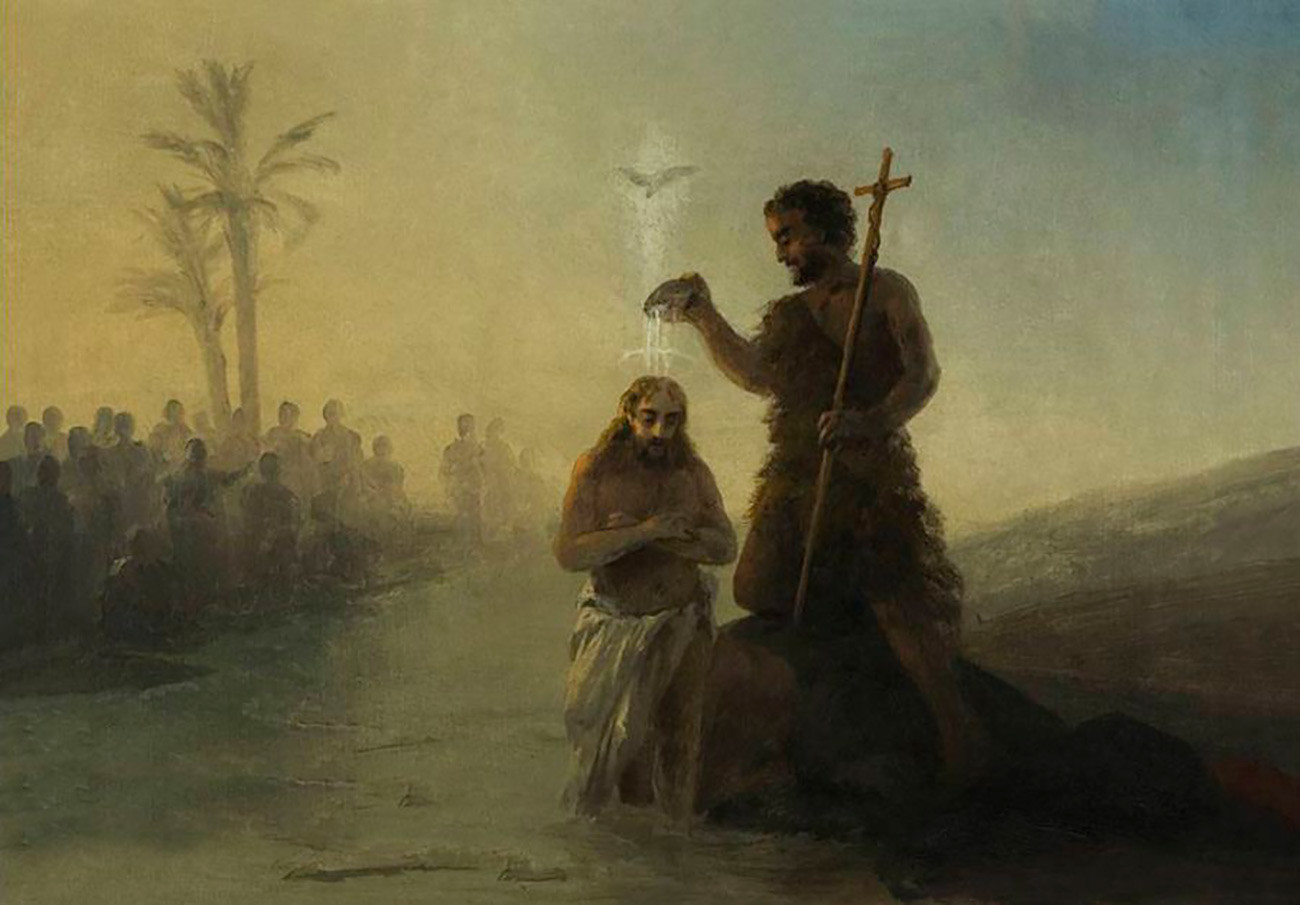 Aivazovsky is more famous for his monumental seascapes. But he didn’t overlook religious motifs either. 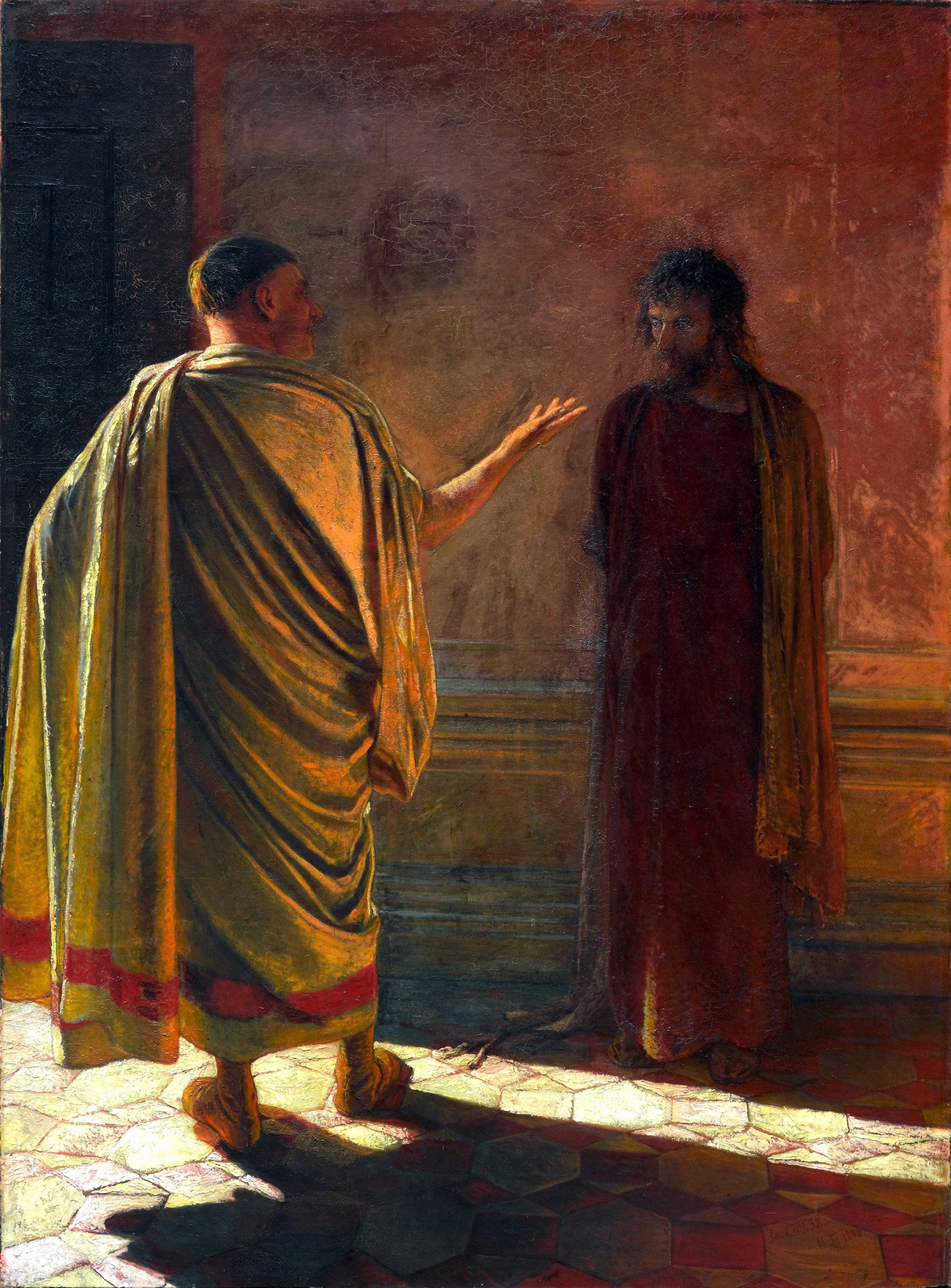 Another bold departure by Ge from the established canons of religious painting, this time on the subject of Christ’s conversation with Pontius Pilate after his arrest. Ge places the son of God in a dark shadow (when he usually shines), and portrays him as shabby, inexpressive, even pitiful. Pilate, meanwhile, struts like a winner.

9. Arkhip Kuindzhi. Christ in the Garden of Gethsemane. 1901 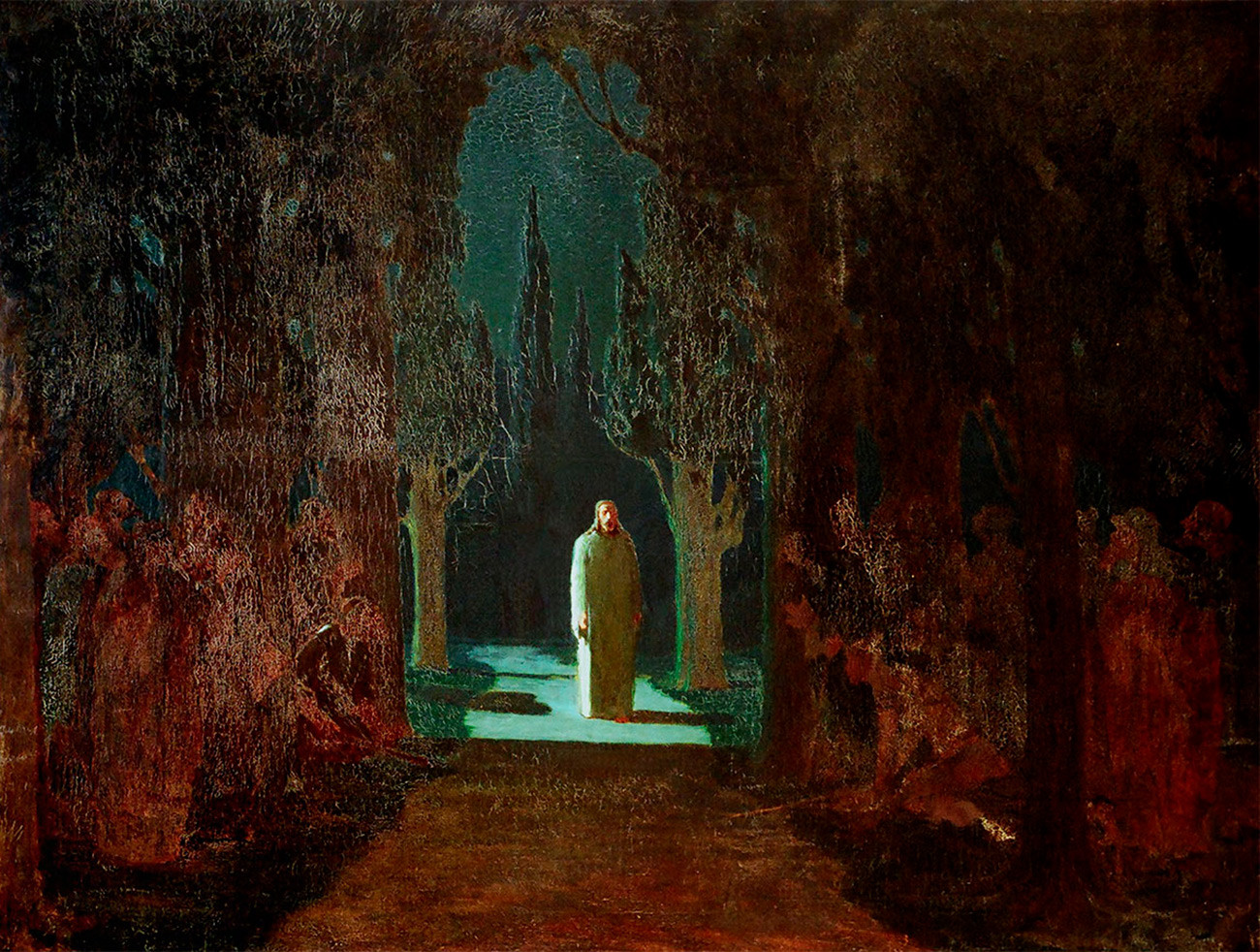 Kuindzhi is best known as a landscape painter, and his works are noteworthy for his incredible use of light. In this biblical composition, he illuminates Christ with moonlight in stark contrast to the darkness around him. 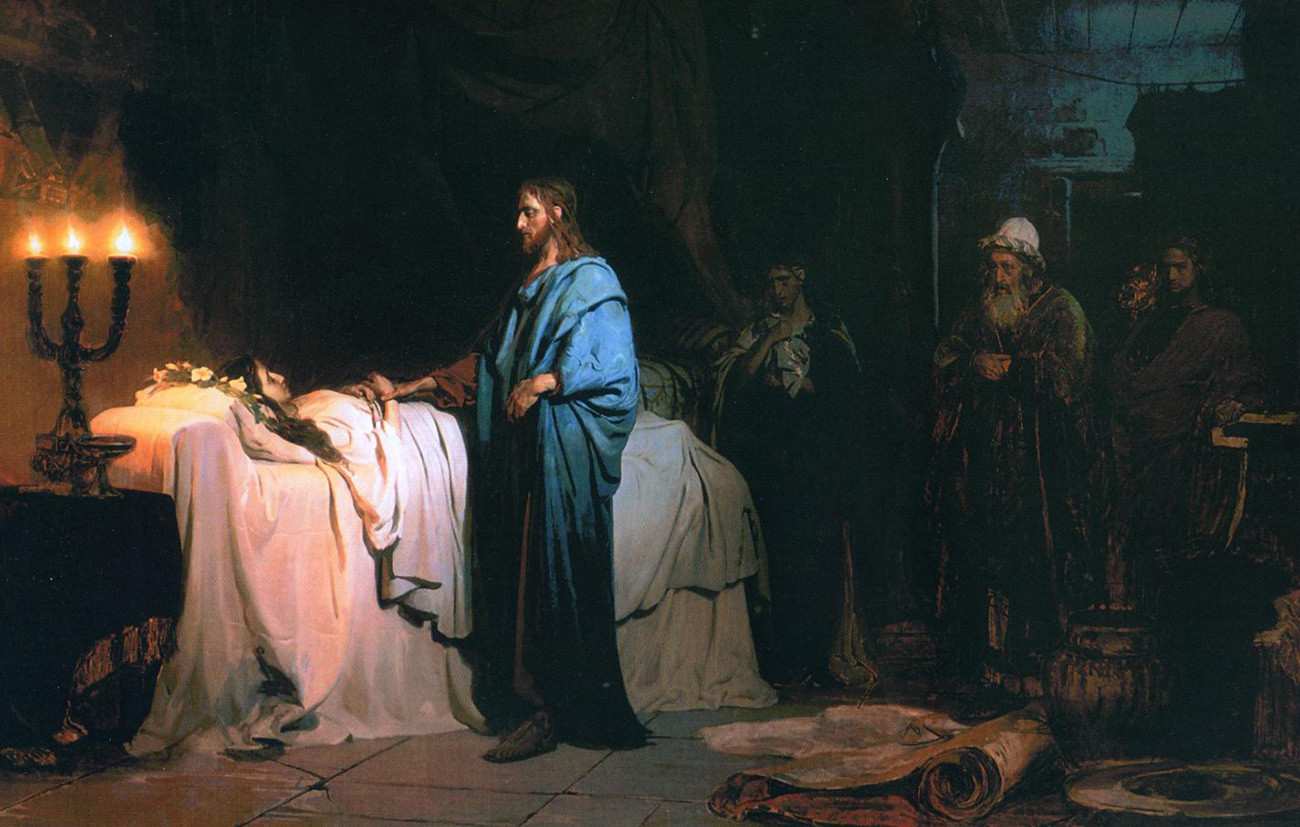 This was Repin’s final-year project as a student at the Russian Academy of Fine Arts. The artist managed to convey the tense moment a second before the biblical miracle of the Resurrection. Incidentally,  Repin received a gold medal for the work. Later, his images of Christ would evolve into something more realistic and even post-impressionist. 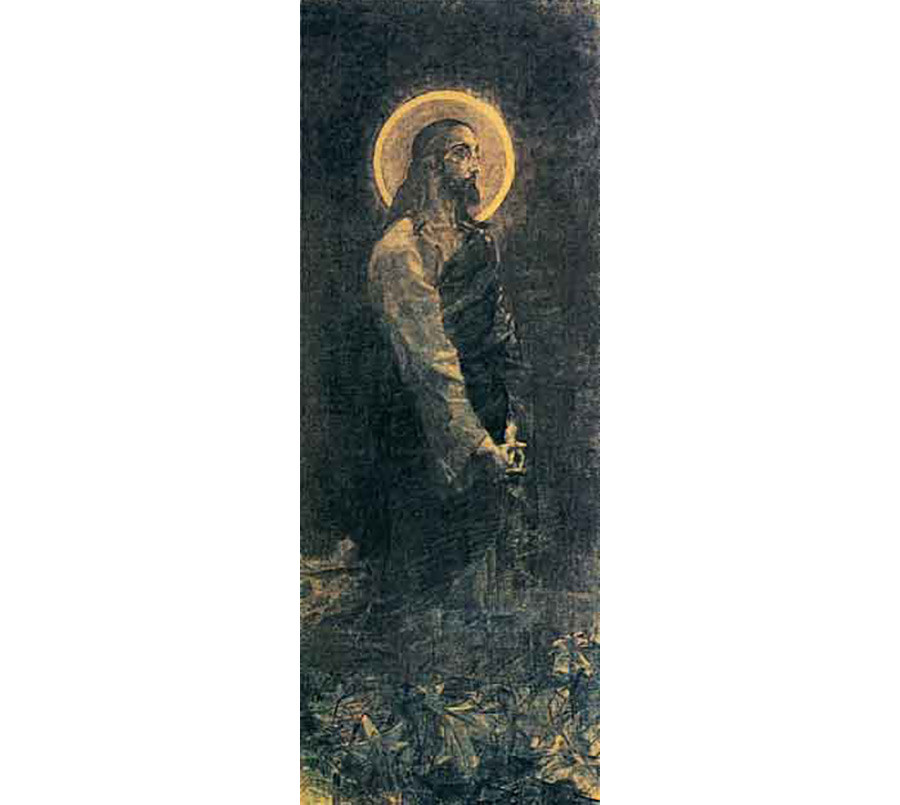 Better known for depicting dark demons, the modernist Vrubel also painted holy spirits and prophets, and even decorated churches. This charcoal drawing by the artist resides in Moscow’s Tretyakov Gallery. 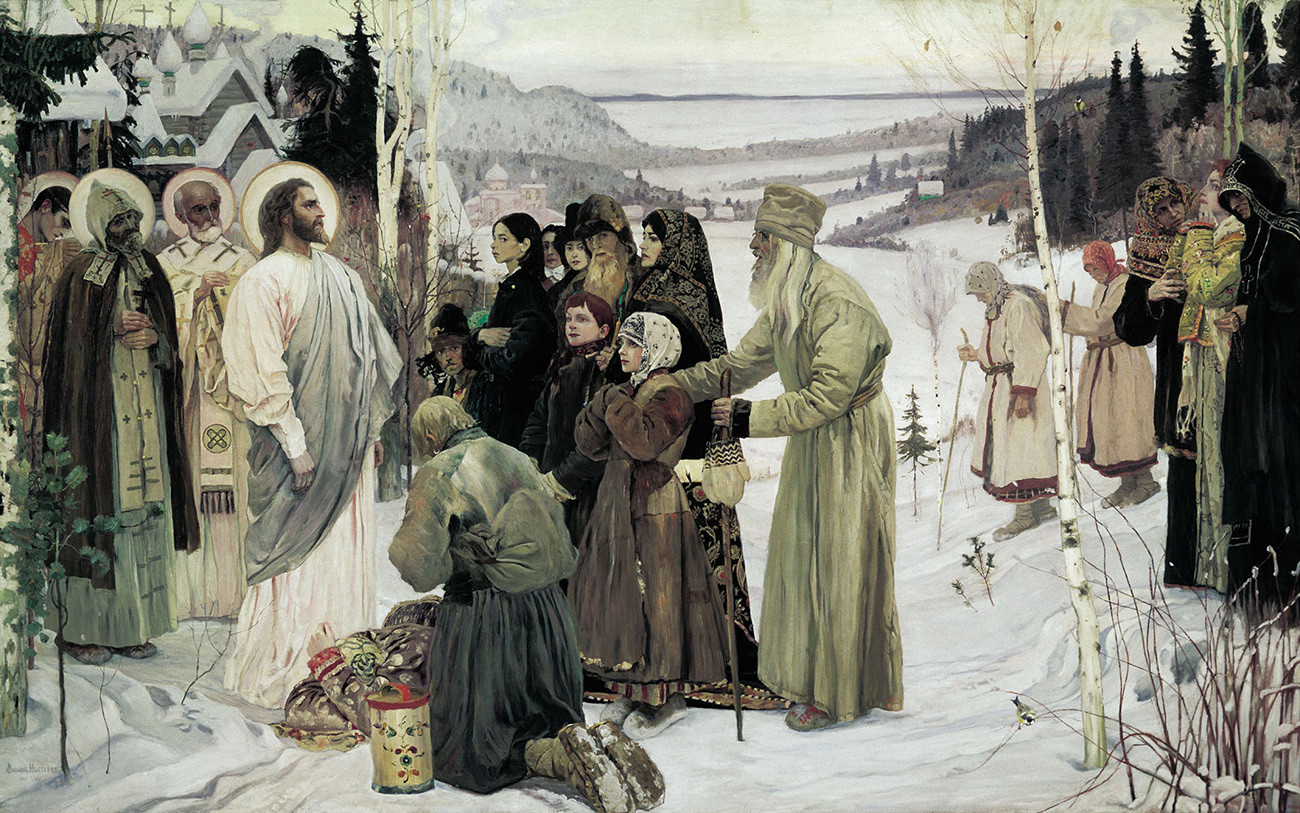 Mikhail Nesterov also painted many churches and left numerous sketches on biblical themes. Archangels, the Virgin Mary, saints, monks, and, of course, Christ himself all sprung from his brush. In his flagship work Holy Rus, the Savior blesses indigent, suffering Russians.