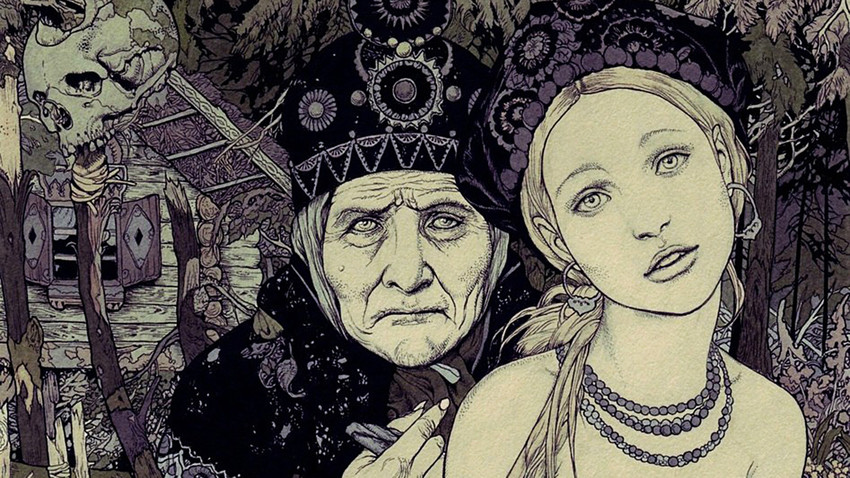 Characters from Russian fairy tales and Japanese folklore, demons, dead bodies and beautiful women from brothels - these are the main subjects and themes in the works by Vania Zhuravlev, a Russian artist who emigrated to London and who creates graphic art in a style very reminiscent of Russian engravings of the early 20th century. Except that there is a lot more sex and death in them.

Vania has a considerable online following, but little is known about his real life. Zhuravlev began to paint from an early age, his mother was an arts teacher. Subsequently, the boy’s talent got noticed: he appeared in several installments of a TV show about children with a talent in a particular field: mathematics, music, art, etc.

“When I was a child, I used to draw animals and birds all the time and now I draw women,” Vania once explained. “I can’t think of anything more interesting or beautiful at this point in my life. I use female characters in my work to say or explain things about myself.” Men, according to him, symbolise danger and fear.

Zhuravlev graduated from Edinburgh College of Art and in 2000 moved to London, where he continued to pursue his artistic experiments. Interestingly, he draws without making any sketches.

His works are full of deliberately explicit images of women. “I believe that sexuality is one of those things that we practically cannot control. It is primeval, changeable in its essence and incredibly powerful,” Vania says.

There is a lot of symbolism in his works. Many see them as influenced by Art Nouveau, Russian artists Bakst, Vrubel and Bilibin, vanitas themes, Japanese artists Suehiro Maruo and Kazuichi Hanawa, Suehiro Maruo's ero-guro manga and even Japan's imperial nationalism. Vania himself says that he finds folklore the most important and inspiring.

“Firstly, great fairy tales carry a wide range of emotions: from fear to hope. Secondly, many of them have elements of a non-linear narrative, especially in Russian folklore. I really love these 'stories inside stories',” he says.

“Thirdly, fairy tales are filled with the power of imagination, something that present-day children's literature has lost altogether, I think."

In London, Zhuravlev was spotted by the Big Active creative agency, which gave him access to new commercial opportunities and sparked an international interest in his works. His portfolio includes, for example, graphic works for American comic book publishers Fantagraphics and Dark Horse, album covers for Duran Duran TV and Beck's ‘The Information’, as well as illustrations for The Scotsman, Creative Review, Little White Lies, National Geographic, The Fader, Grafik and The New York Times. He has won several prestigious awards, including the advertising and design industry's 'Oscar', the D&AD Yellow Pencil Award.