How foreign men disappoint Russian women (where to start?) 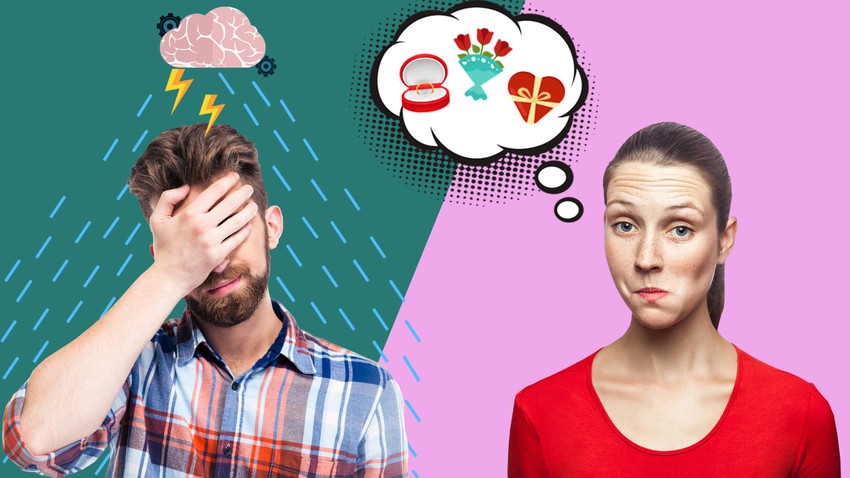 Legion Media
“He’s like: ‘We don’t give flowers. Only on anniversaries or funerals.’ And I’m like: ‘So what? Don’t get antsy. It’s always easier just to humor a woman!’”.

When Karina from Moscow was preparing to go on vacation with her American boyfriend, it turned out his plans didn’t include paying for her hotel or plane tickets. Insult was added to injury with the words: “What is it, your birthday or something? Or are you a refugee and have no job?”

“His salary was about four times mine, we’d been together about six months, and I didn’t even suspect that who pays for what on holiday would be a topic of discussion. Because Russian men usually pay for EVERYTHING!” says Karina. For her, it was a kick to the stomach.

To this day, many Russian women still dream of being swept off their feet by a charming foreigner (“marriage migration” has even been the subject of a Russian academic study by the Gumilev Center). But oftentimes expectations do not match reality. 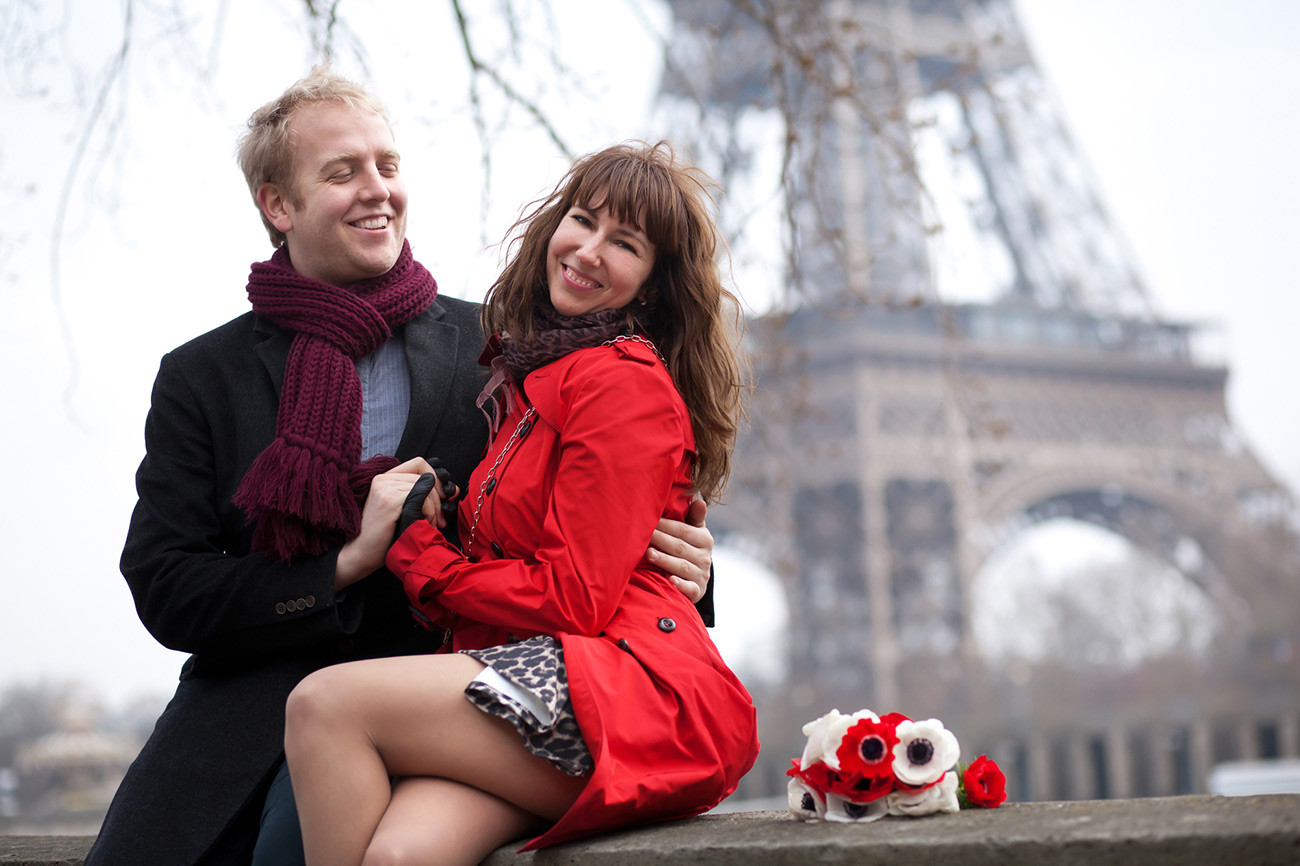 “In France, people are often in no hurry to marry, many have children without tying the knot, get married later, or continue to live without a ‘stamp in the passport.’ For example, my boyfriend’s parents got married when he (their eldest child) was 19,” says Alena, 26, a student at HEC Paris Business School. When she moved to Paris, their relationship was in its third year. This approach to marriage shocks many Russians from the post-Soviet space, and a proposal to conclude a PACS (pacte civil de solidarité, i.e. a civil union) is seen as a permanent brake on ever getting married properly.

“A PACS union is an official partnership that provides the same tax benefits as marriage, and also simplifies visa issues,” explains Alena. “My boyfriend and I decided to go for it. I began to look for information in online groups such as 'Russian Paris' and found lots of people unhappy about such a partnership.” One comment read: “Normal men with serious intentions propose marriage, while PACS is like a test drive, a try-before-you-buy option.” A certain Tatyana Kuznetsova is even more scathing: “It’s an insult. Don’t settle for PACS. All or nothing,” she writes.

Alena, however, reacted positively to the PACS offer: “I still think I’m too young for marriage.” What she found irritating at first were other unrelated things: “When he tried to get me to listen to some terrible Cossack songs from an equally terrible VK group, and sent some Putin stickers in Telegram (instead of “Vladimir” he called him “Vova”). But that was a long time ago, says Alena. These days, only his suggestions to vacate in Russia cause annoyance. “I get irritated by his offers to spend our vacation in the village of Vyoshenskaya (where And Quiet Flows the Don was set) or Crimea. Because these are the last places in the world I’d like to go. I don’t really want to go to a former Soviet resort...”. 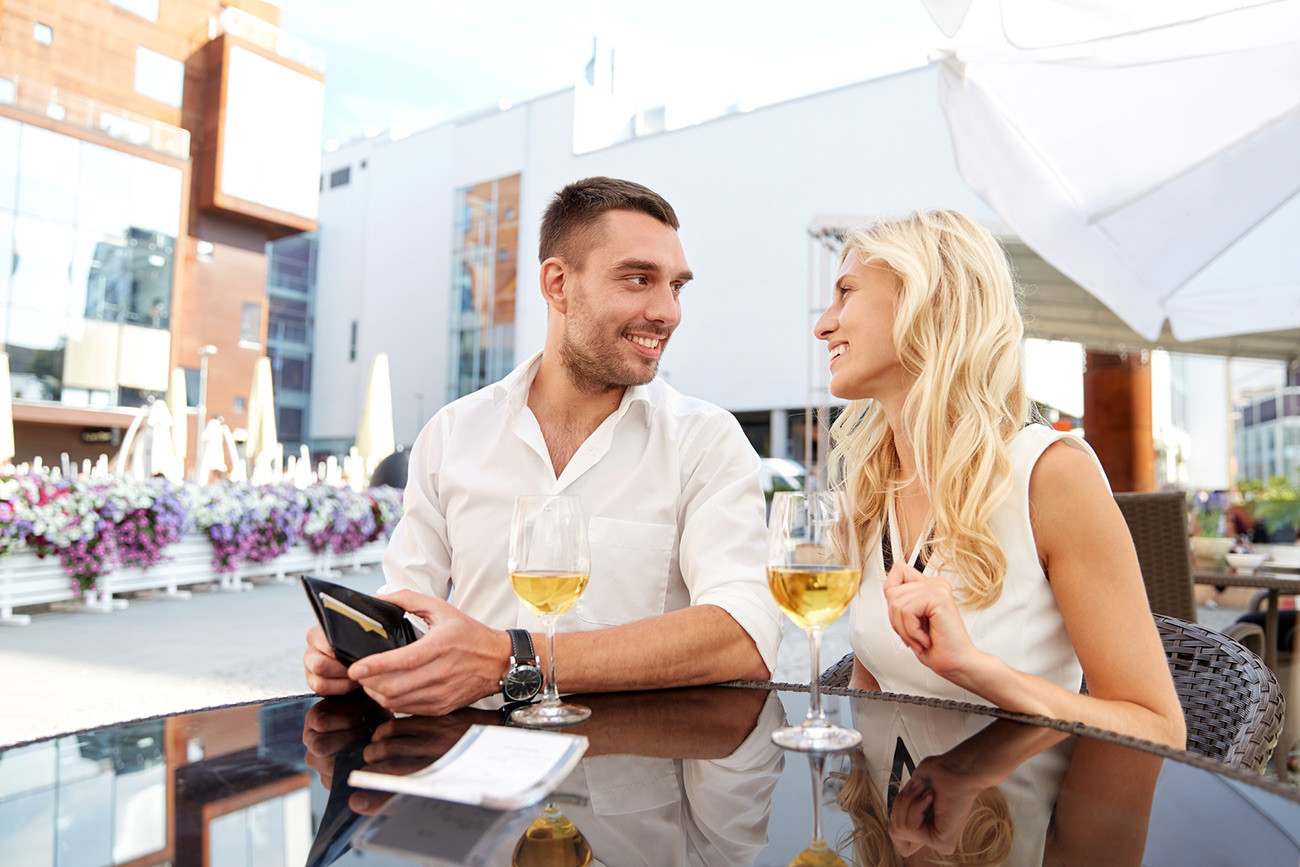 For many Russian women, the final, deal-breaking straw is the suggestion that she should pay for herself.

“I met my French ex-husband in a club. He was in Moscow on business. We didn’t date for long, but the romance was so breathtaking that we soon decided to get married. He immediately suggested that we go and live in France. I agreed, quit my job, took out my savings, and left,” says 26-year-old Lena.

“At first everything was fine, apart from the language barrier. I started French classes and began to communicate more, but my husband became increasingly jealous and paranoid without cause. Then the nit-picking began, the little resentments over everything I did. The last straw was when he criticized me for 'buying too many products' and 'spending too much money for no earthly reason.' After that, he divided our budget into 'mine' and 'yours.' I couldn’t put up with it for long. The divorce was difficult, but worth it,” she recalls.

There is general agreement on Russian women’s forums: “They count every cent. It's hard to live with their philosophy... for example, of having separate checks,” writes Olga.

In online communities where Russian women swap how-to-marry-a-foreigner stories, the opinion predominates: paying for your own flight, hotel, or dinner when visiting your boyfriend is a definite no-no.

“I once knew an Italian guy in Malta. He spoke so charmingly and treated me wonderfully. But we had little time to communicate for real. The next day I flew home. Then he wrote and invited me to visit, but only if I paid my own way. I didn’t go, of course,” Ekaterina Olyanaya told Russia Beyond, adding, however, that it wasn’t just about money. The Italian seemed too ideal: “He knew what to say and how to behave. And he was insanely good-looking. But it feels false when a guy acts perfect. At first it’s spellbinding, but soon becomes boring.” 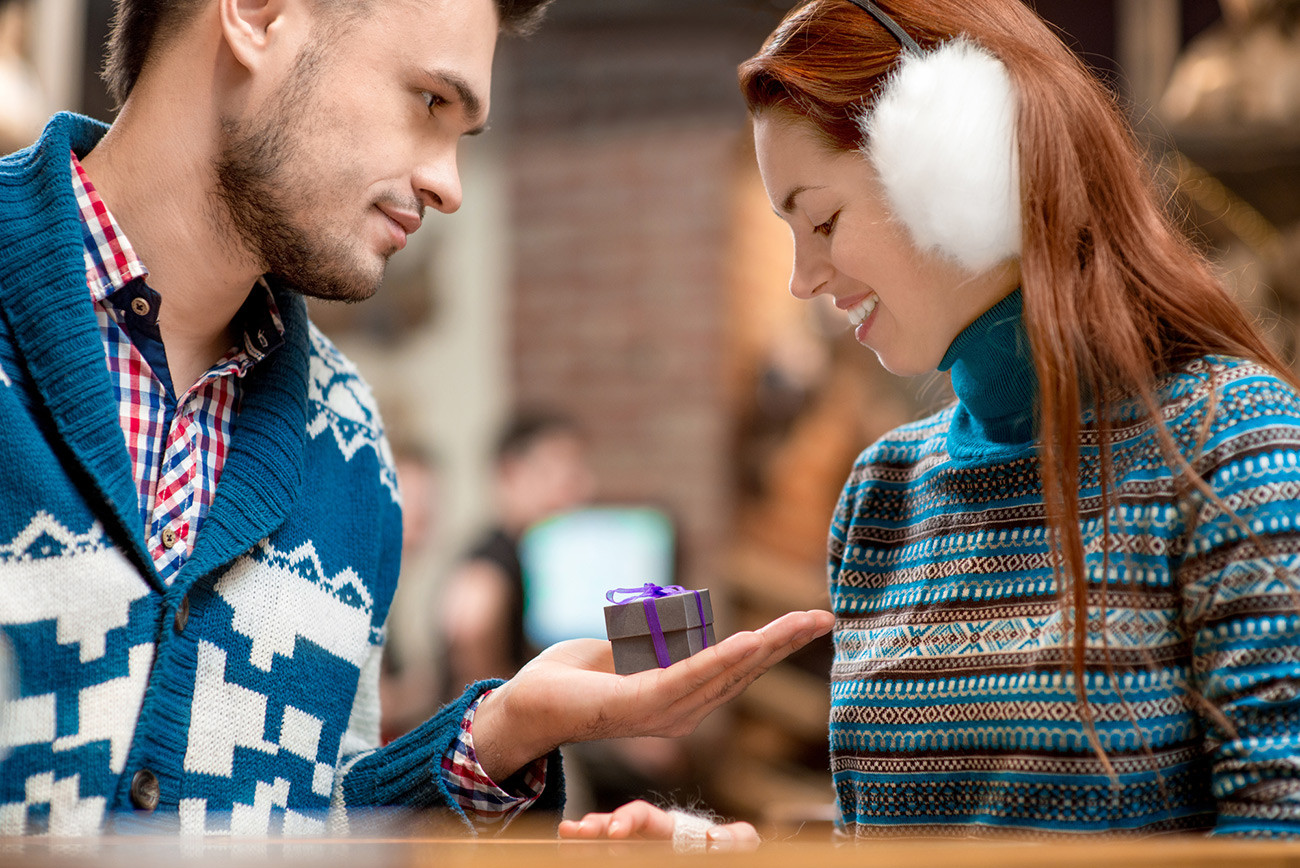 Gift-giving is even more of a minefield for men than seeming too perfect or not being sufficiently generous. For Russian women, gifts are a very big deal. It’s a man’s chance to impress her, which means that disappointment is all but inevitable.

“My mistake is having inflated expectations. But the biggest mistake of many men (especially foreigners with a different mentality) is inflexibility. We women want flowers. Right now and for no reason. Don’t get antsy about it and say: ‘We don’t give flowers. Only on anniversaries or funerals.’ So what? It’s always easier to humor your girlfriend. She’ll be happy, and your nerves will be no worse for wear,” says Yulia Gerus, a user of the app Hi, Jay!, in response to Russia Beyond’s question.

Anna Marsters, a 32-year-old linguist who spent several years with an American from Illinois, remembers gifts from the US that weren’t gladly received: “He seemed to think that central Russia was still in the Paleolithic age. He sent me packs of very basic medicines, chocolate, and horrible licorice sweets.” 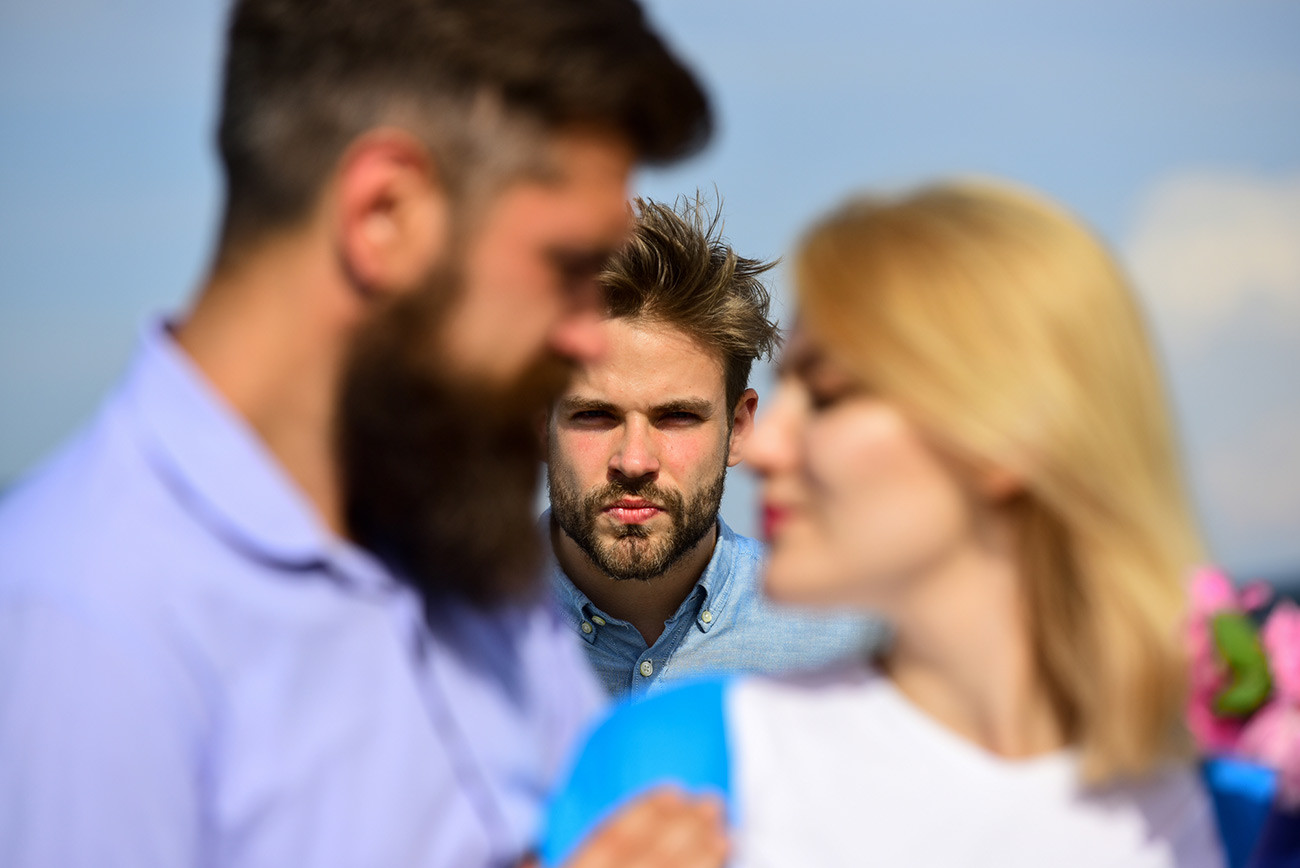 An equally significant cause of friction is the stereotypes that prevail about both Russia and Russian women in media and online blogs, and often get rooted in the heads of foreigners.

“I can’t stand total ignorance of Russian history and statements like ‘The States is the coolest place to live’ or ‘We saved France and won WW2 on our own.’ Or clichés like ‘Russia is always an aggressor.’ Plus questions about how I can live in ‘such a homophobic country.’ In some ways they may be right, but there’s nothing like meeting a foreigner to arouse your inner patriotism,” writes Liza.

Katya from St Petersburg once heard her US boyfriend admit: “My worst fear is to end up in a Russian hospital. How can you trust them? It’s scary to imagine getting into an accident and waking up there.” She was tormented by resentment for a long while afterwards: “He didn’t offend me personally, but still, what the hell?!”

But the number one stereotype became clear to The Question user Vera on a six-month internship in Europe: “I talked to many foreigners and really understood how they relate to Russians. They think Russian women are ‘accessible’ and desperate to emigrate any way they can. I encountered respect for Russians only in the academic circle in which I worked. For them, yes, Russian scientists still have a reputation as worthy opponents.”

Ekaterina Olyanaya ran into the same stereotype: “Before getting married, I traveled a lot with friends, but didn’t know anything about the reputation of Russian women abroad. Then I began to notice that foreign men like us and think they can get intimate sooner,” she recalls.

On one such trip, she met a Frenchman. After two days together, he decided she was “his woman.” “He began to accuse me of smiling at other men and said I should dress more modestly, although at the time I was wearing a long-sleeve dress without a neckline. He went on to say he’d heard that Russian women were loose, but was ready to give me a chance to turn over a new leaf. I told him au revoir.”