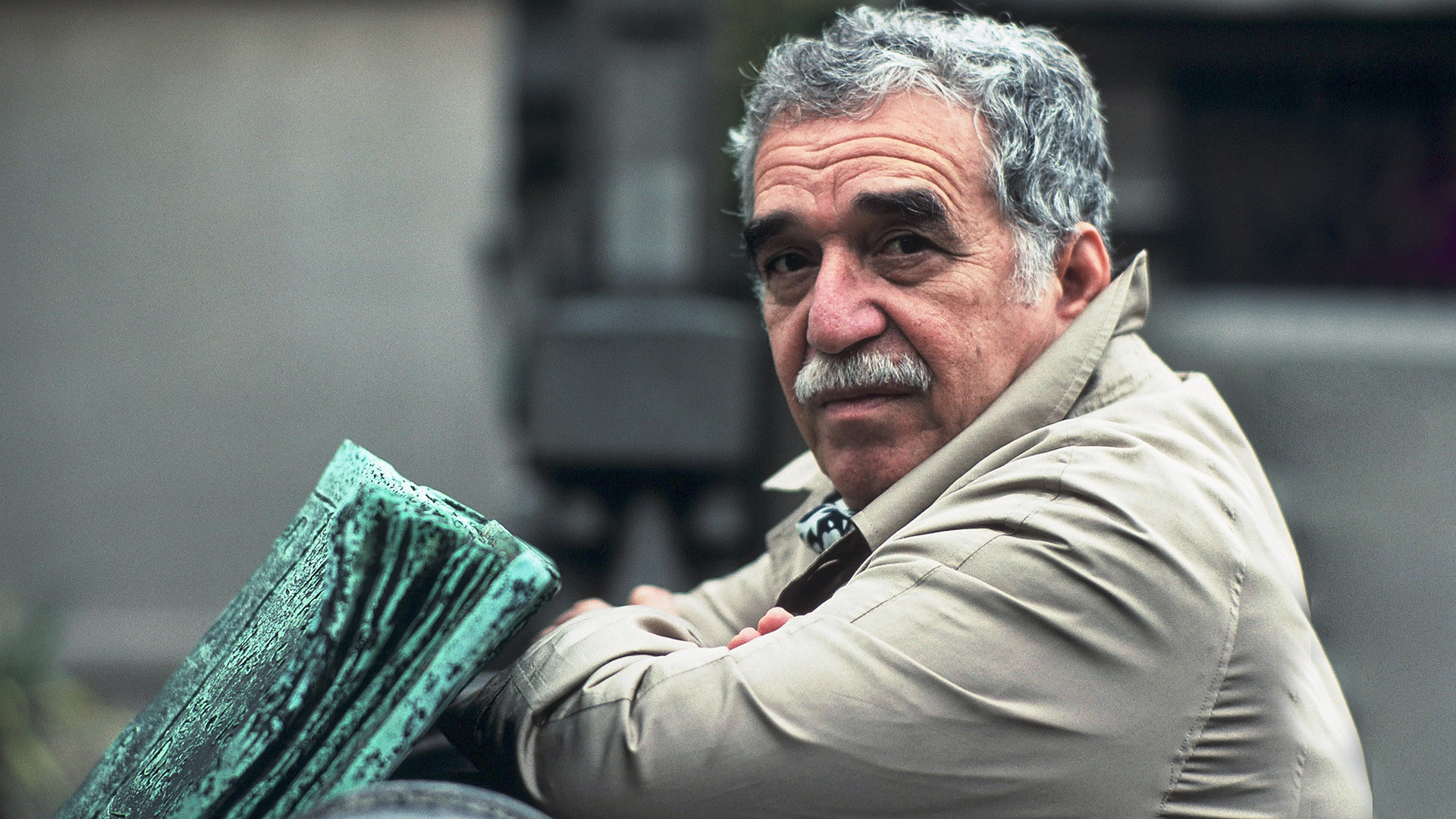 Getty Images
In the minds of many, a trip to this huge northern country is an extreme and incredible adventure. It is therefore hardly surprising that in the 19th and early 20th centuries such a journey must have felt almost like a voyage to the moon. This is also why many great writers who dared to make this trip left some striking recollections for future generations. 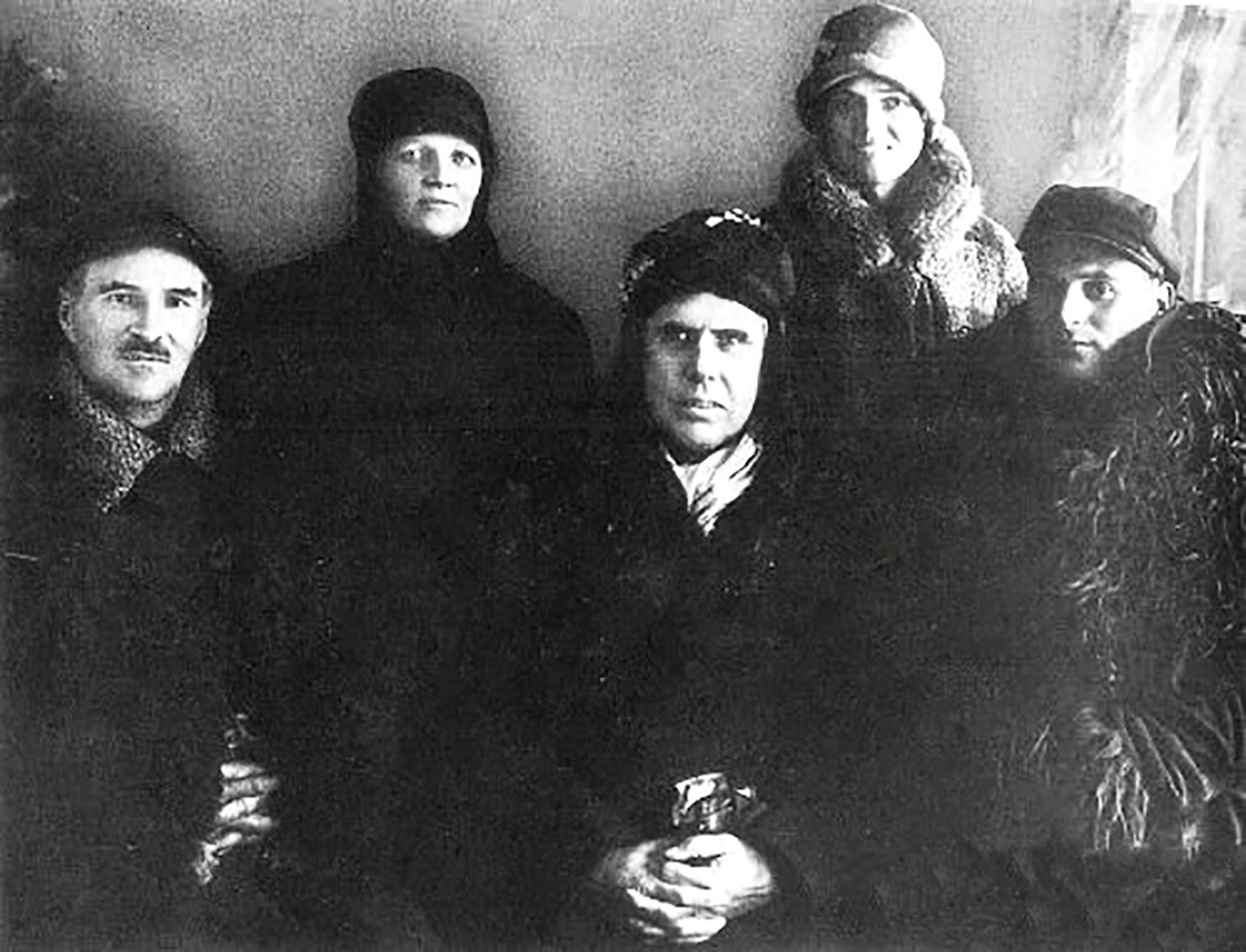 Dreiser was invited to visit the USSR in 1927, when the country was celebrating the 10th anniversary of the Bolshevik Revolution. Throughout the two months of his travels, he wrote down everything he saw, and upon returning to America he substantially revised his journals, finalizing them into a book.

"Lenin. A new world hero, I presume. If the world goes over to the dictatorship of the proletariat, as I assume it will, how great will he not be. Another Washington. Another Cromwell. Already Russia is thick with his fame. His statues and pictures are so numerous as to constitute an atmosphere. In Moscow alone there are so many busts and statues of him that they seem to constitute an addition to the population. Thus: Population of Moscow—without statues of Lenin—2,000,000; with statues of Lenin,—3,000,000."

He also notes that some Russian habits were to his liking:

"I think the Russians do nothing but eat, and I am getting the habit." 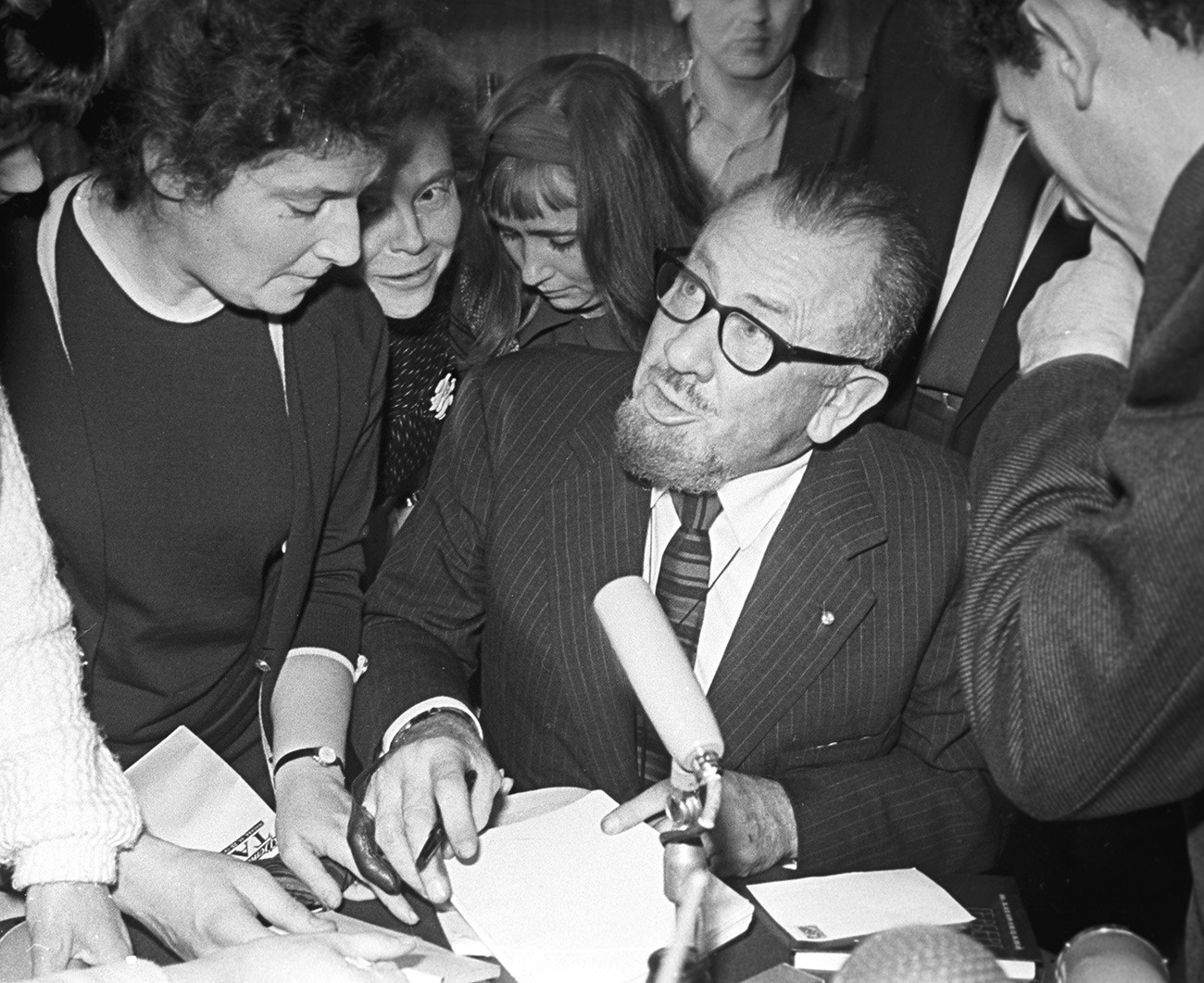 Steinbeck briefly visited the USSR in 1937, and then came on a longer visit in 1947, after which he wrote A Russian Journal. He was accompanied by photographer Robert Capa, whose pictures became part of the book.

Steinbeck noted that everyone in Russia was talking about the future, whereas in the present, very few sensible things were being done.

“In Russia, that is always the future that is thought of. It is the crops next year, it is the comfort that will come in ten years, it is the clothes that will be made very soon. If ever a people took its energy from hope, it is the Russian people...”

Steinbeck was also impressed with the efficacy of Soviet propaganda.

"The Russians are taught, and trained, and encouraged to believe that their government is good, that every part of it is good, and that their job is to carry it forward, to back it up in all ways. On the other hand, the deep emotional feeling among Americans and British is that all government is somehow dangerous, that there should be as little government as possible, that any increase in the power of government is bad…" 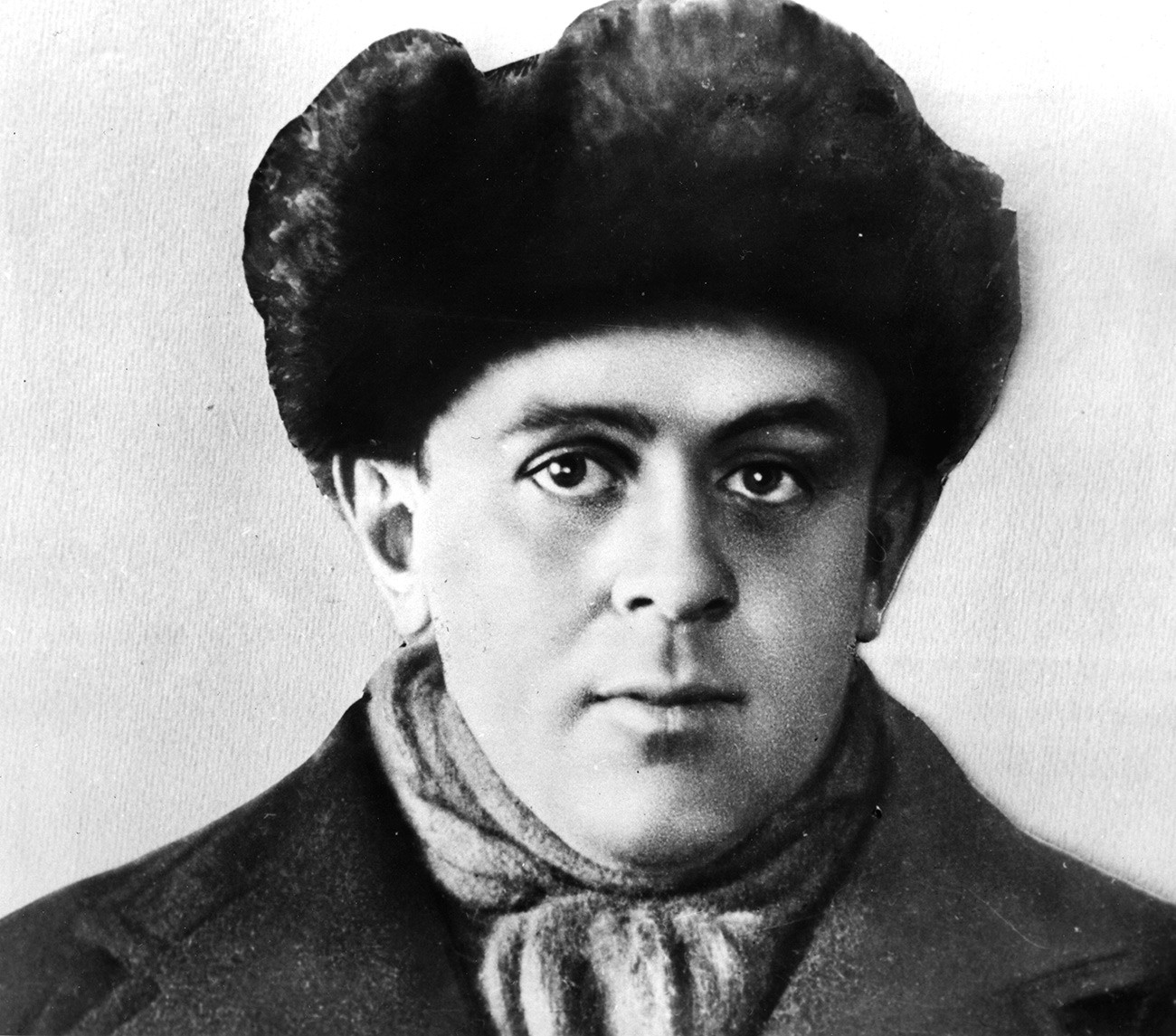 American reporter, writer and revolutionary John Reed in moscow, around 1917-18

American socialist John Reed became witness to a turning point in Russian history - the Bolshevik Revolution of 1917. Furthermore, he even took part in it to some extent: he worked as a translator for the Ministry of Foreign Affairs in the infant Soviet government. His book was such a hit with the Bolsheviks that Lenin recommended it be read by all the workers in the country. In the end, John Reed was buried near the Kremlin wall, an honor granted to very few foreigners.

He noted that one particular trait of the Russians was their love of reading.

"We came down to the front of the Twelfth Army, back of Riga, where gaunt and bootless men sickened in the mud of desperate trenches; and when they saw us they started up, with their pinched faces and the flesh showing blue through their torn clothing, demanding eagerly, “Did you bring anything to read?”

Read more: Why was John Reed buried at the Kremlin Wall Necropolis? 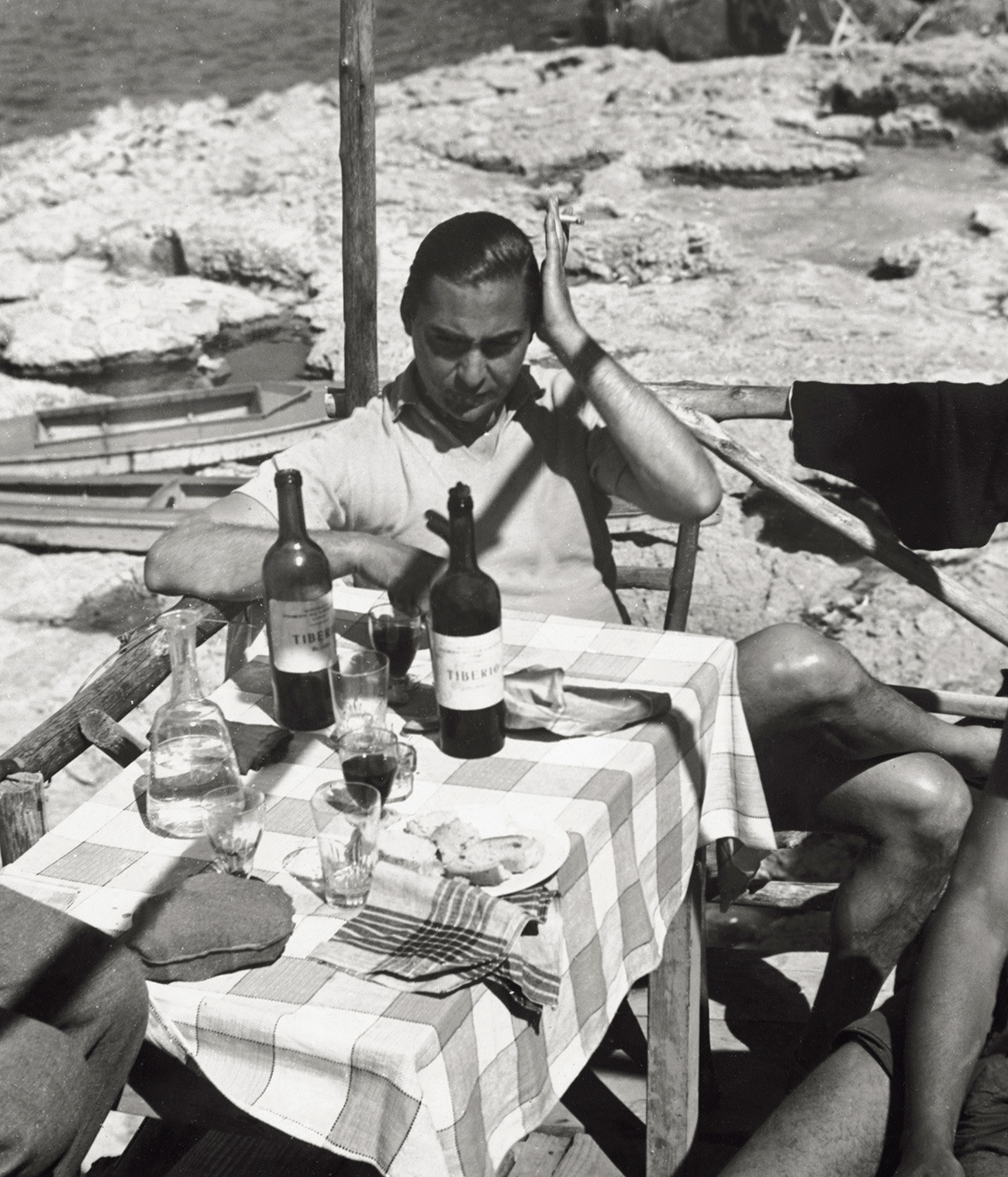 The Italian writer traveled around the USSR in 1929 and was struck by the luxurious lifestyle enjoyed by the party elite, compared with the poverty of the masses. His book about “Moscow's Marxist aristocracy” was not finished, and was only published after his death. Italian expert in Slavic studies, Stefano Garzonio, believes that this book“could have been a timely contribution to the political discussions of the de-Stalinization period”.

“The Russian people felt betrayed by the ruling class. The degradation of this revolutionary class was obvious. When Lunacharsky’s wife, in an expensive fur coat and jewelry, stepped out of a car in front of the Bolshoi Theater, the people felt, and saw behind the glittering jewelry, a gleam of betrayal. I felt that all this rotten, corrupt class, a bunch of expensive whores, queers, actors, actresses, playboys, profiteers, nepmans, kulaks, black marketeers, Soviet officials, who dressed in London and Paris and imitated New York and Berlin manners (with thick cigars coming into fashion, the same as those sticking out of capitalists' fleshy lips in Hamburg and on Wall Street, or in Gross's cartoons) is doomed.” 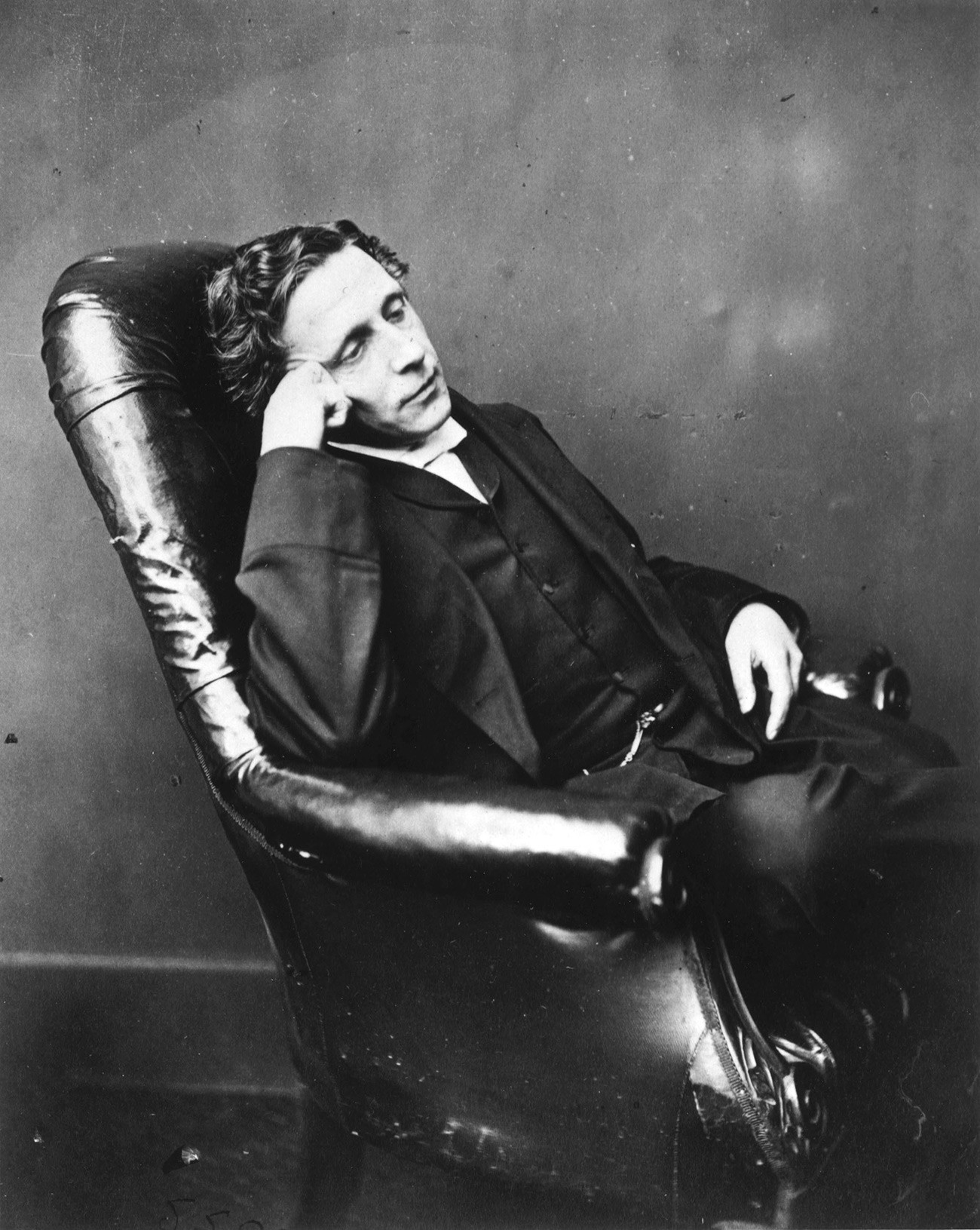 The author of Alice in Wonderland visited Russia at a friend's invitation in 1867. He stayed in Moscow, St. Petersburg and Nizhny Novgorod and, apparently, was completely delighted with what he saw.

“The enormous width of the streets (with bystreets, it seems, wider than anything similar in London), the little droshkies that went running about, seemingly quite indifferent as to running over anybody, the enormous illuminated signboards over the shops, and the gigantic churches with their domes painted blue and covered with gold stars, and the bewildering jabber of the natives all contributed to the wonders of our first walk in St. Petersburg.” 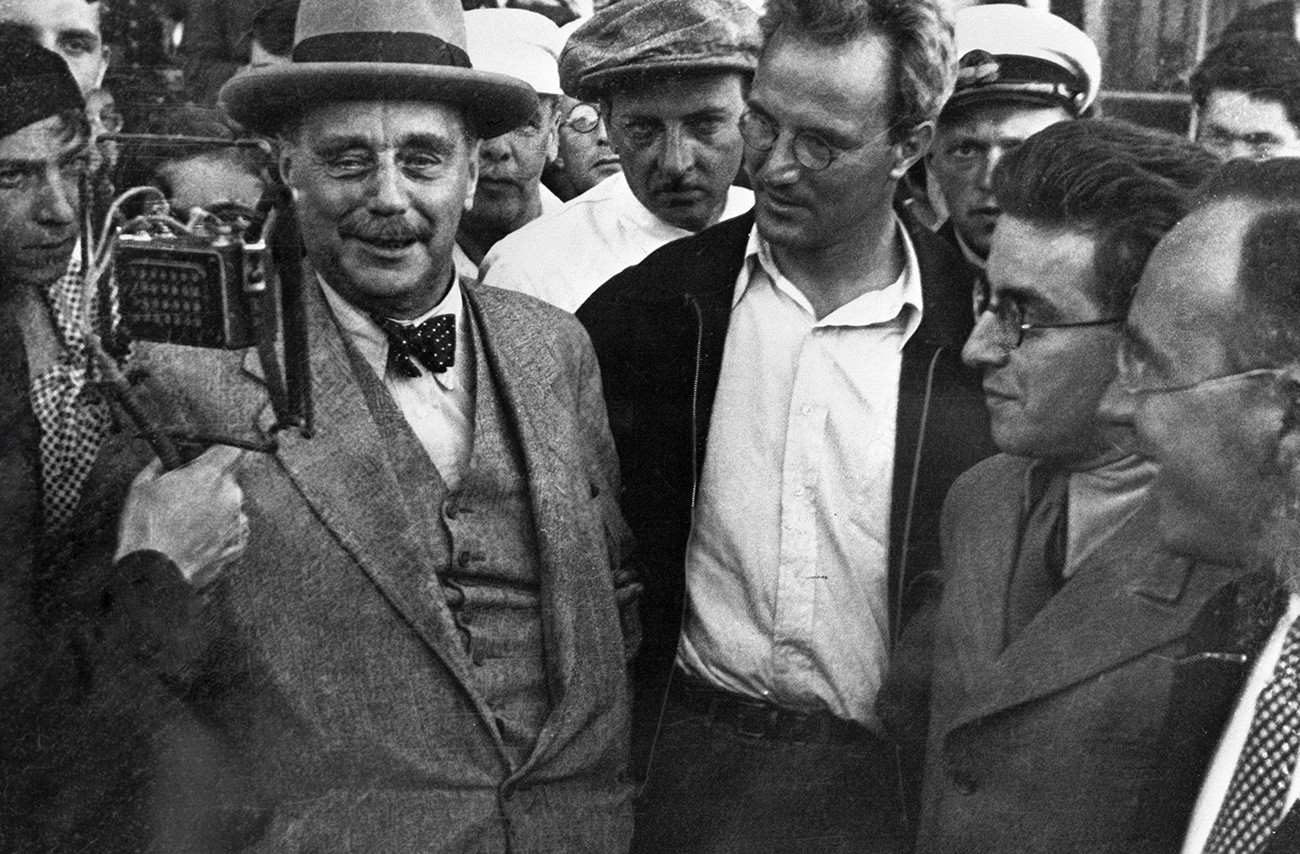 The science fiction author traveled to Russia three times. First, in 1914, then in 1920, when he met with Vladimir Lenin, and later, in 1934, when he had a meeting with Joseph Stalin. He wrote this in his book, Russia in the Shadows, after his second visit:

"Our dominant impression of things Russian is an impression of a vast irreparable breakdown. The great monarchy that was here in 1914, the administrative, social, financial, and commercial systems connected with it have, under the strains of six years of incessant war, fallen down and smashed utterly. Never in all history has there been so great a débâcle before <...> The peasant, who was the base of the old pyramid, remains upon the land, living very much as he has always lived. Everything else is broken down, or is breaking down." 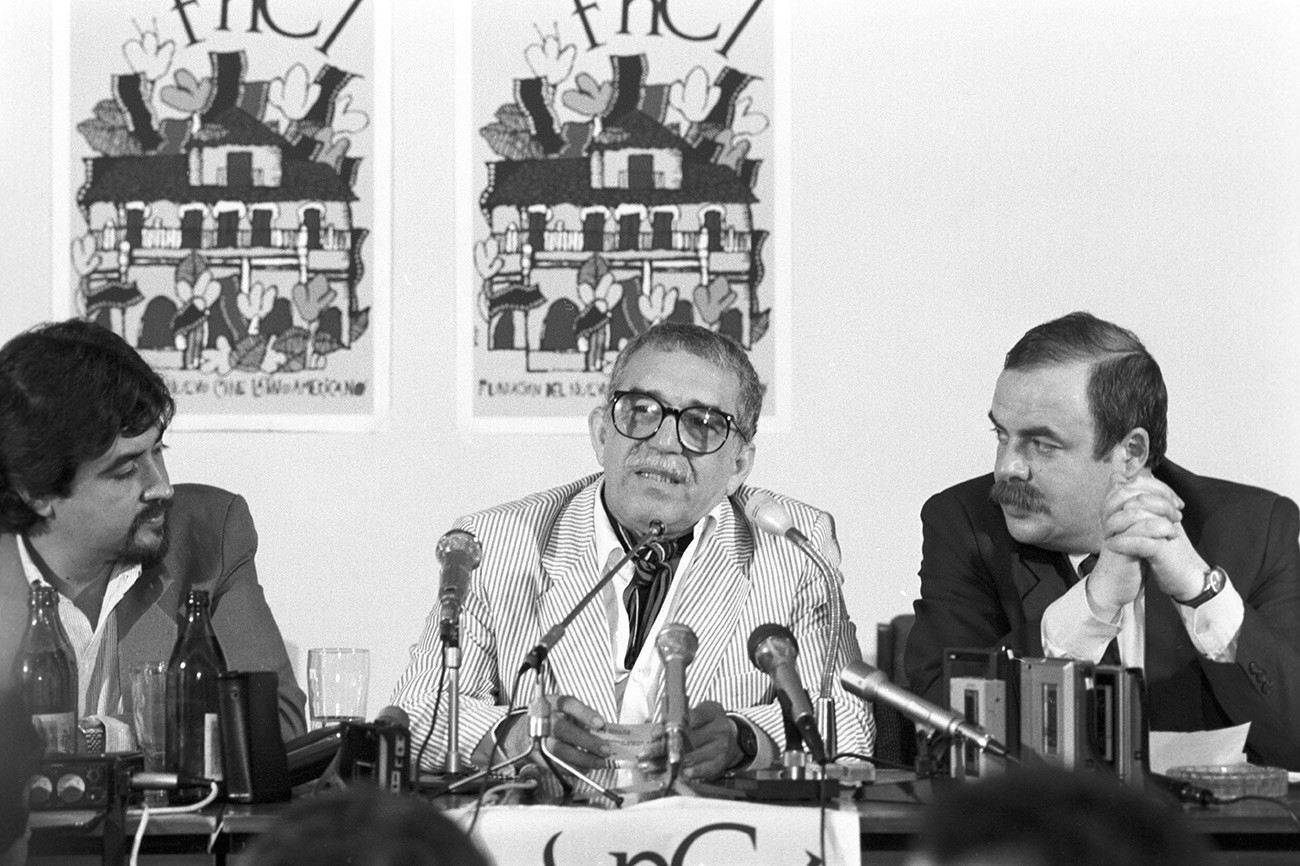 The Colombian author visited the USSR in 1957 in order to attend the Moscow Festival of Youth and Students.

One of his most memorable quotes ended up as the title of the essay that he published after the visit. But it was far from the only noteworthy quote:

"It is hard for anyone who has seen the drab window displays of Moscow stores to believe that the Russians have nuclear weapons."

"The disappearance of classes is an impressive reality: everyone is the same, everyone is wearing old and poorly made clothes and bad shoes."

"Radio sets are very cheap in the Soviet Union, but the freedom of their application is limited: you can either listen to Moscow or turn the radio off."

“For the 40 years since the revolution, the Soviet Union has directed its efforts towards the development of heavy industry without giving any importance to consumer goods. That is why they were the first to come up with the world's largest aircraft for international air travel, while their population do not have enough shoes." 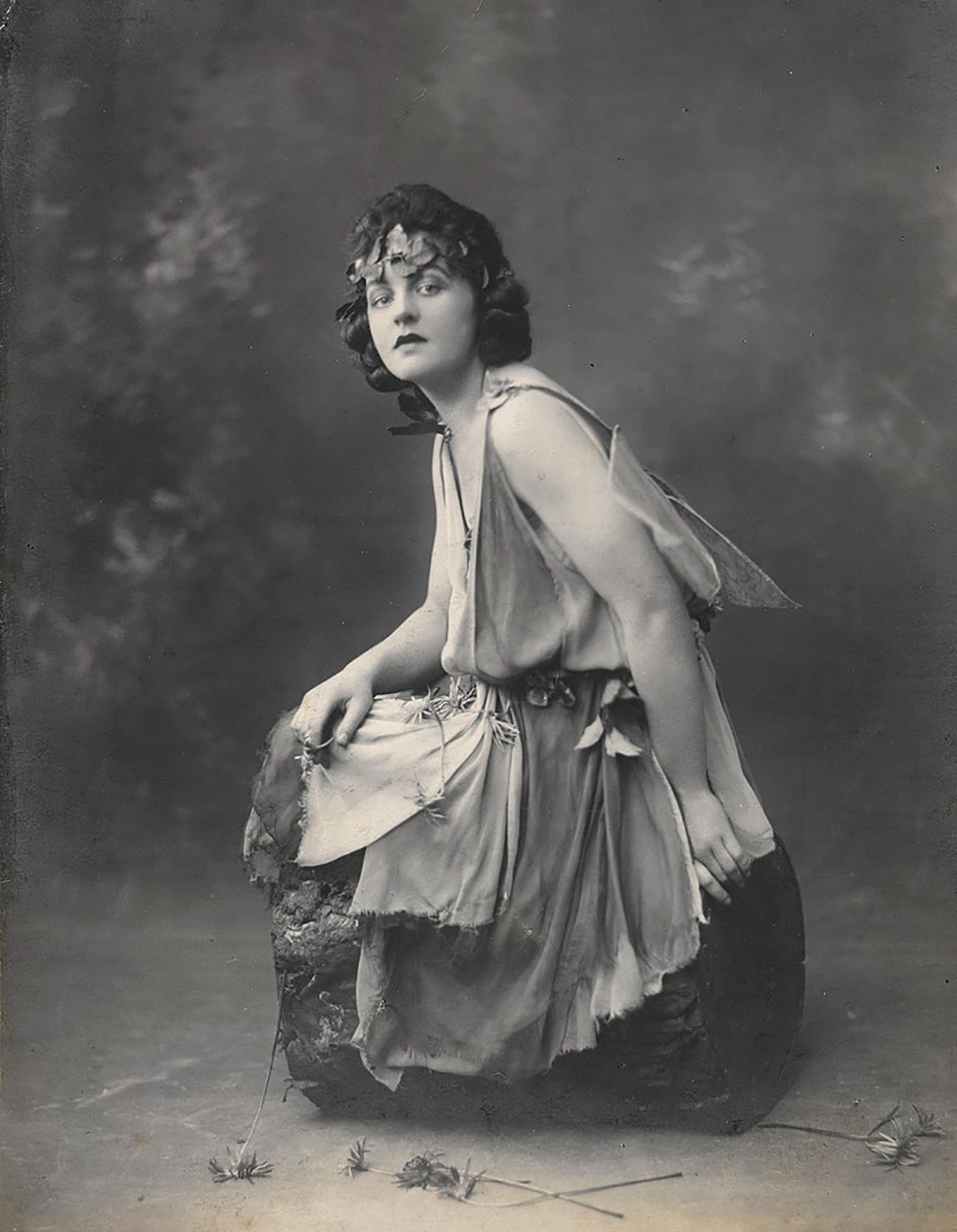 The author of Mary Poppins was lucky to visit the USSR as a solo traveler in 1932; other writers often visited the Soviet country as part of official delegations.

“To see Russia properly, one must not be a tourist. One must know the language, move about alone and dispense with the questionable blessing of the State guides. With these the traveler with any sense of history finds himself often at variance, for few historical events are recognizable once they have been doctored with Marxism and Expediency.”

Upon arrival, she advises everyone to go to ... the theater! “In order to understand Russia, all tourists must be taken to the theater immediately upon arrival. The country's life is here! Sitting in the Russian theater, you begin to understand how the Soviet state has managed to bring the country to the extreme: supplement their natural inclination for acting with incessant propaganda and endless posters, and you can get a person used to the current regime."

Travers also had an important insight into the nature of Communism:

"One sees at once that the Soviets are not concerned with atheism, but with throwing over one god to deify another – Man - perhaps with the ultimate ideal Paradise, here and now, Heaven on Earth, the symbol Lenin, and the choir of angels the Communist Party. There is no people more inherently religious than the Russians – it is just that now they have turned their faith in a new direction.”

9. André Gide, Return from the USSR 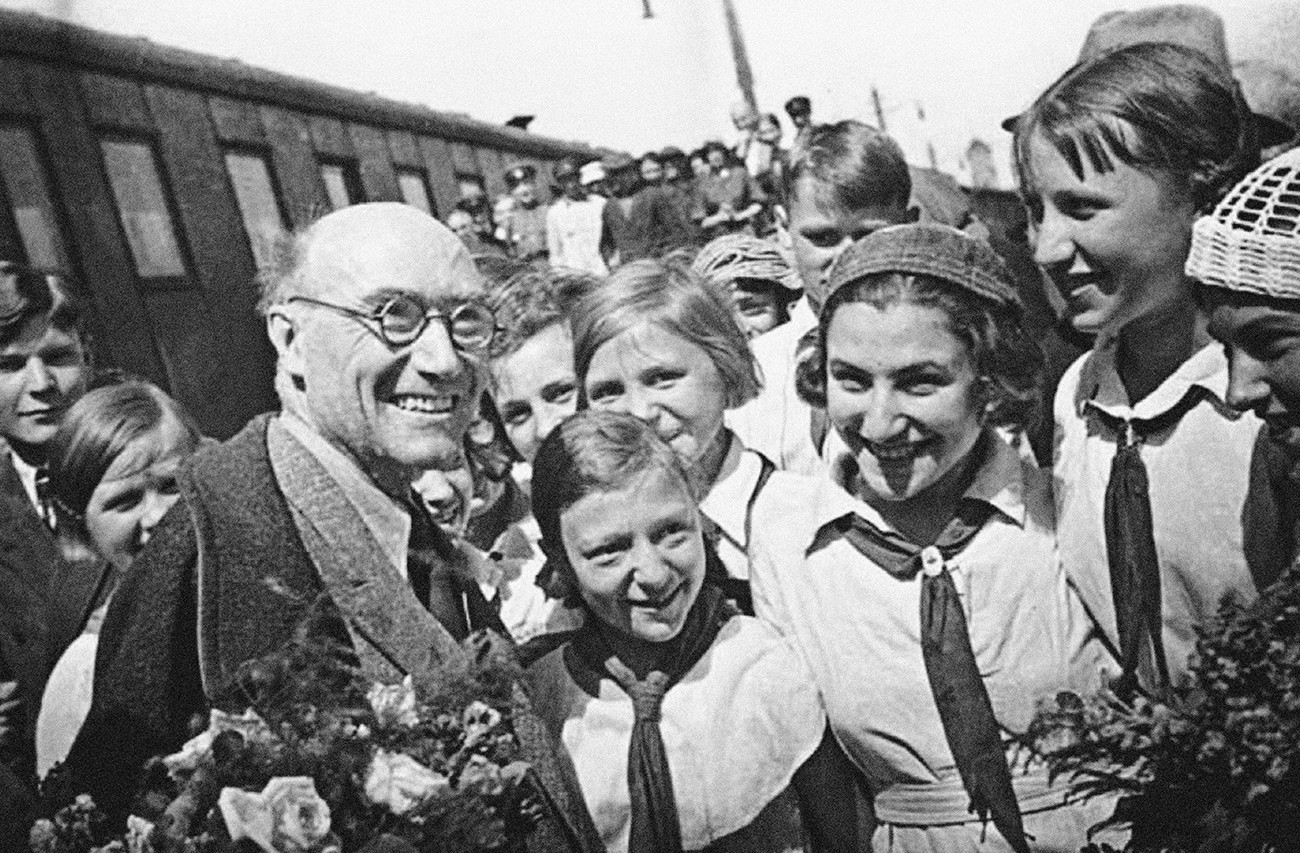 The French writer and playwright was one of the greatest friends of the USSR, and after his visit there in 1936, his remarks about the Soviet authorities' actions were wholly complimentary. While Travers pointed out that labor and work had replaced all other life there, Gide noted the Russians' natural indolence, and admired how the Soviet government made people work.

"To return to the people of Moscow. What strikes one first is their extraordinary indolence. Laziness is, I suppose, too strong a word.... But Stakhanovism is a marvellous invention for brisking up idleness (in the old days there was the knout). Stakhanovism would be useless in a country where the workers all work. But out there, as soon as they are left alone, they become slack. And it's a marvel how, in spite of this, everything somehow gets done. At the expense of what efforts from above it would be impossible to say. In order to realize the immensity of these efforts, one would first of all have to estimate the natural unproductivity of the Russian people." 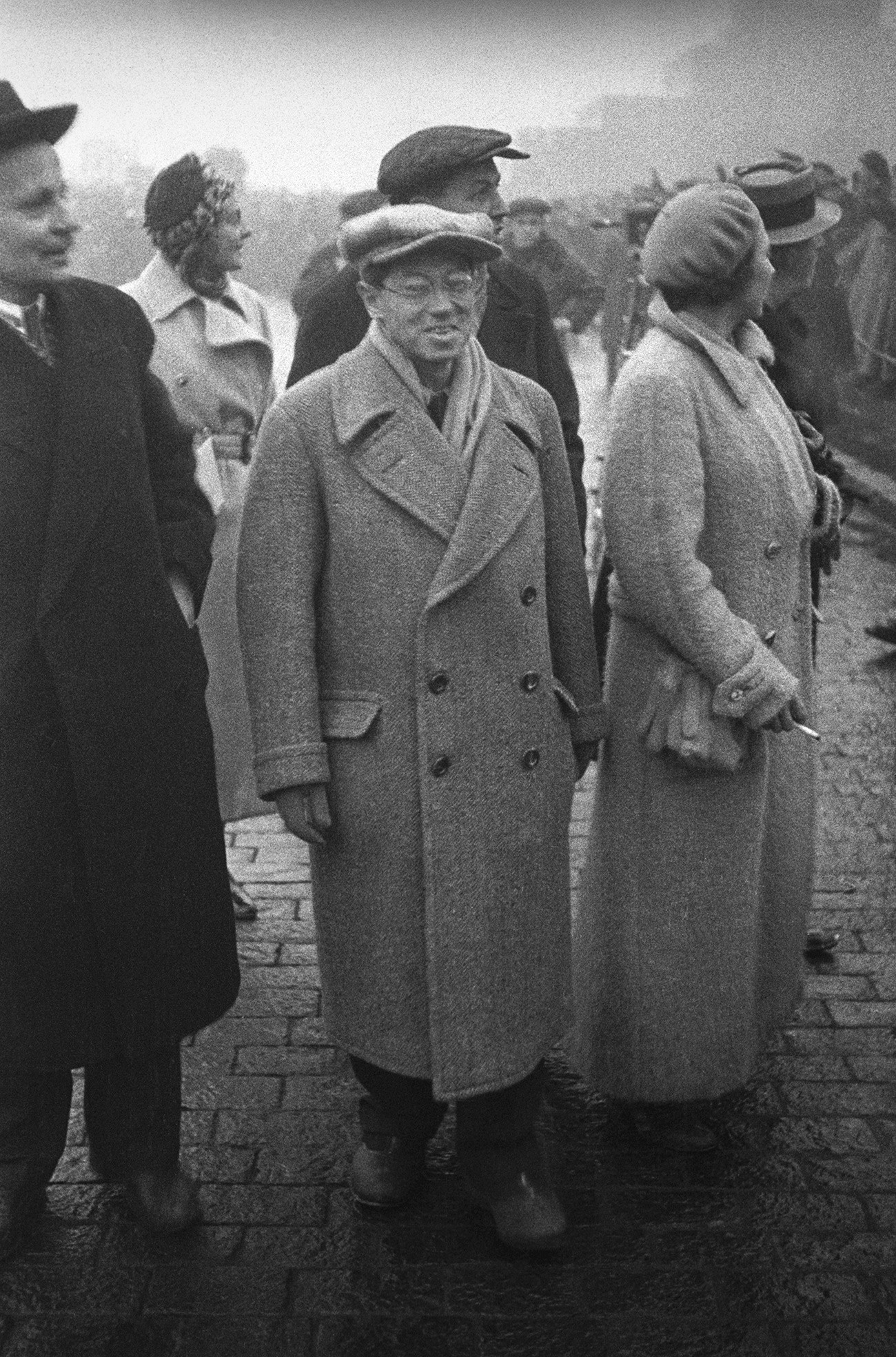 Overall, Feuchtwanger's account was quite complimentary, and he was very sympathetic to Stalin and the USSR (which later, when he was exiled to the USA, caused much concern to the FBI).

At the same time, he could not help noticing the rise of Stalin's personality cult:

“Images of Stalin are everywhere, his name is on everyone's lips, his praises are in every speech. In particular, in Georgia, in any dwelling, even in the most dingy and decrepit one, you will without fail see a portrait of Stalin in exactly the same spot where the icon used to hang. I don’t know what it is: adoration, love, or fear, but he is everywhere.”