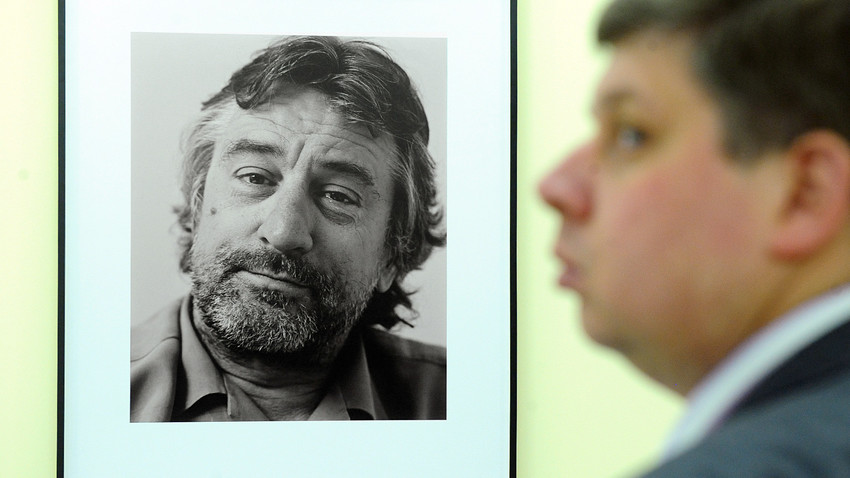 Valery Sharifulin/TASS
Sergey Bermeniev works both in Hollywood and Russia and his portraits of celebrities from cinema, music, literature and sport are incredibly deep, showing the soul of the person through his lens.

Sergey Bermeniev is not an ordinary cameraman. He is a psychologist and an artist. After looking at his photos you’ll be convinced.

He once said in an interview that ‘a typical Russian in Hollywood’ is usually someone who is looking, scheming, always trying too hard to get involved in this industry. “Jack Nicholson wouldn’t take off his glasses in front of such a man, Meryl Strip won’t sing Sinatra. But they did this for me.”

This seemingly deep psychological portrait of Quentin Tarantino has a secret that probably not everyone will notice. It's taken by the grave of Boris Pasternak - the name of that great poet is exactly what those cyrillic letters on stone mean.

Bermeniev took several photos of Robert De Niro on different occasions, however this is probably one of the most well known.

Al Pacino. What a vivid moment!

And another great shot with the “ruthless” Godfather.

Julia Ormond and the photographer himself. By the way, the actress is extremely beloved in Russia, as on the rise of her career, she starred as Russian Empress Catherine the Great in the movie 'Young Catherine' and she also played a leading role in a Russian movie called 'The Barber of Siberia' by Nikita Mikhalkov.

Jack Nicholson is caught in Moscow holding a T-shirt featuring Vladimir Lenin and the words: "F*cking revolution". The photographer recalls that Nicholson made the day of those people around and just a few seconds after the photo was taken, he sat down with some random girls and drank beer with them.

What a moment he caught! Meryl Streep preparing for a stage. The caption says "The great one in the Stanislavsky dressing room".

Commemorating the late David Carradine, the photographer shared his thoughts about the Kill Bill 2 movie, which made him rethink life and joy.

Not an often sight - a casual photo of Vladimir Putin.

Allen Ginsberg with the hashtags #bookporn and #booknerd.

And another shot for literature fans - a casual photo of the great poet Brodsky - just smiling and strolling.