8 strangest and most sinister creatures in Amur region folklore 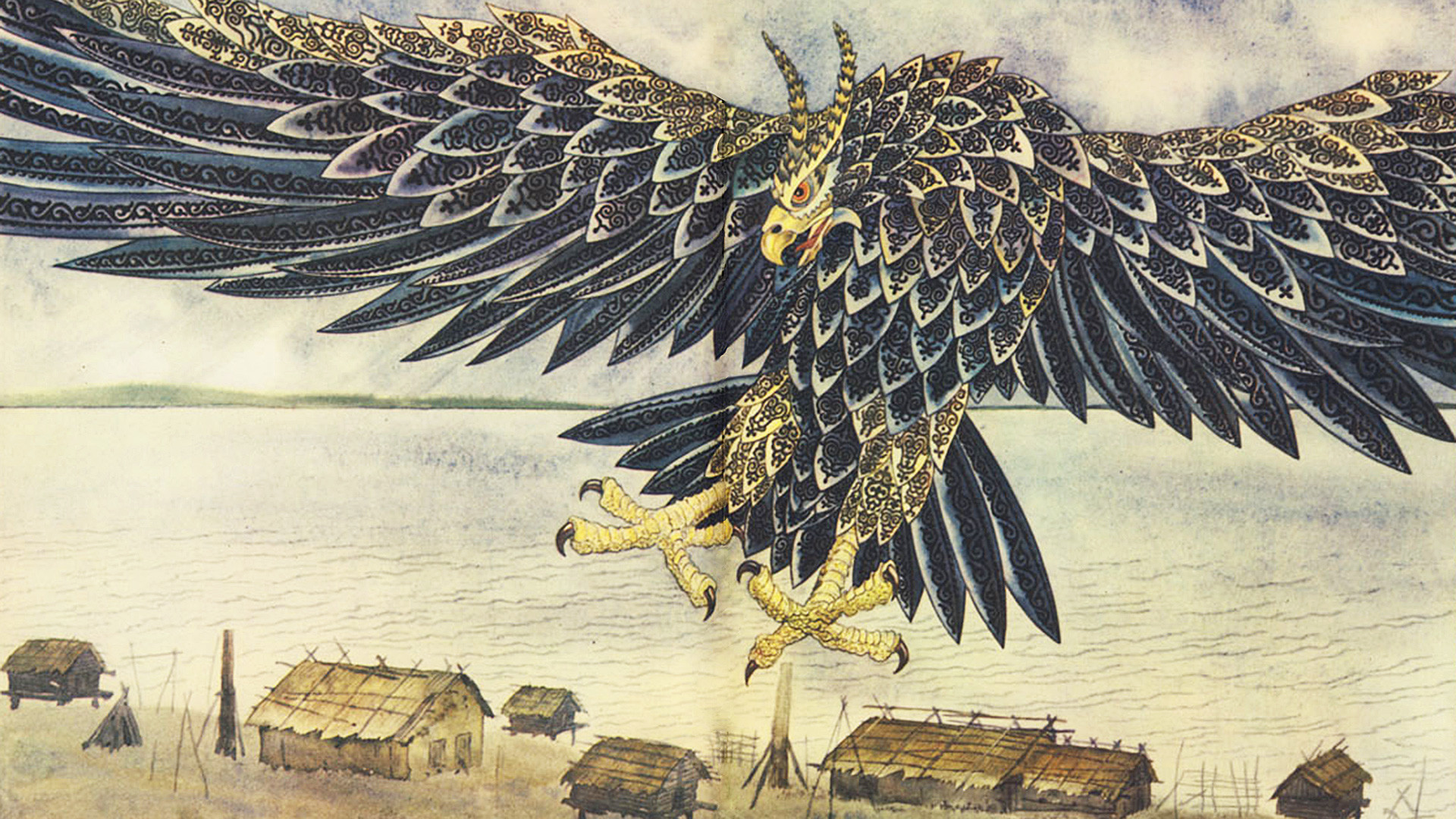 Kori the bird from 'Garlamdi, the crack shot'

A.A. Passar, G.D. Pavlishin/'Malysh' publications, 1990
The characters in fairy tales from Russia’s Far East can outshine even The Avengers with their amazing powers. From sentient local trees that feast on human flesh to a giant who turns everything he touches into stone, here are some of the most unique characters.

There are many indigenous ethnic groups, such as the Udege, Nanai, Oroch, Nivkh and Taz, that have lived in the Russian Far East since ancient times. And each has its own particular interpretation of the world around them. Some still believe they live in a mysterious world filled with various spiritual entities and magical animals, and that these creatures can either help people or commit evil. Tales and folklore about this magical world overlapping with our own were passed on by word of mouth until Soviet period, when they were finally recorded and published in books. Here we’ve selected some of the most unusual characters. 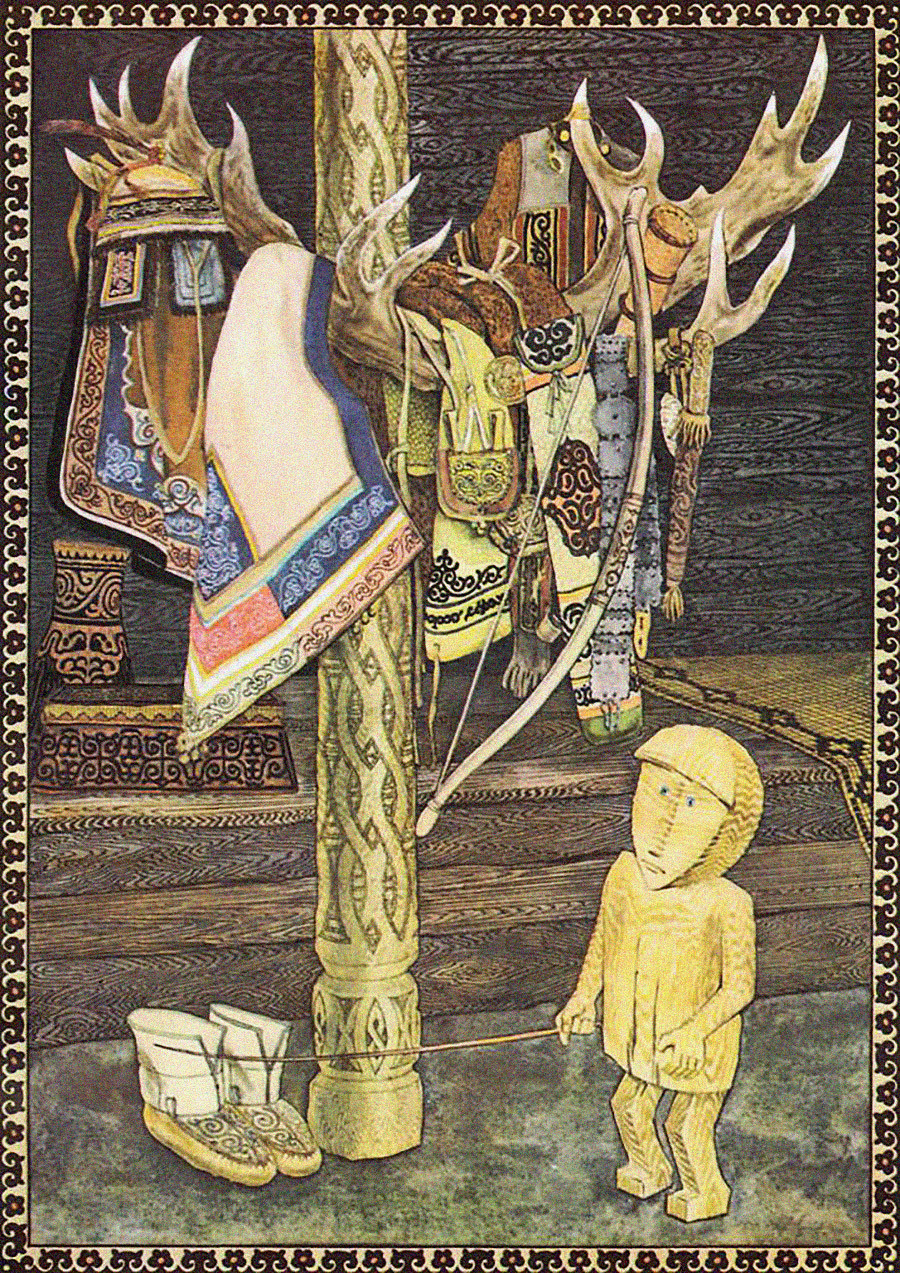 This cute little wooden man lives in houses and protects their residents. He is arguably the most innocuous of all the creatures we highlight here. Although Dyulen practically never shows himself to people, he constantly keeps an eye on order in the house and scares away evil spirits.

Despite his secretive lifestyle, this Amur region house spirit can communicate with people should their family face danger. Dyulen usually lives with the same family for generations, using his magic powers to help them deal with major problems as well as little mishaps.

7. Tayrnadz, the old man of the sea 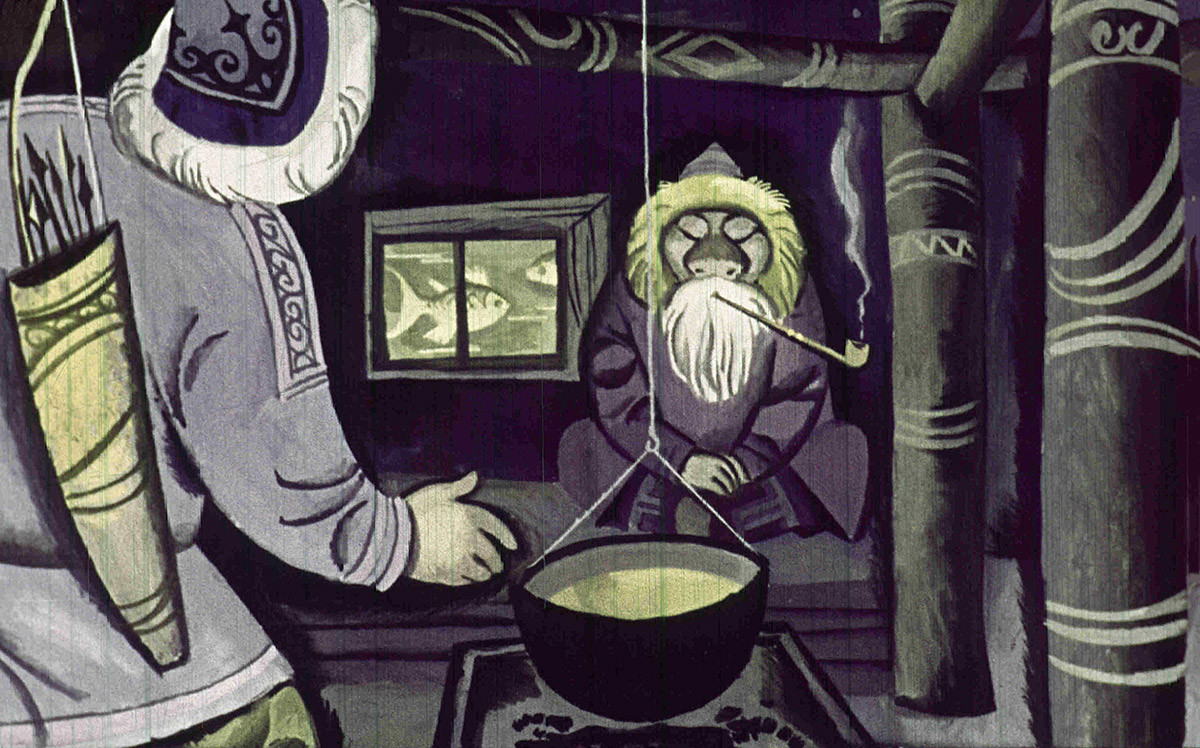 This old man is responsible for making sure there are always enough fish in bodies of water. The catch is that he doesn't always succeed. For example, one day he decided to give himself some rest from his work and take a nap. He ended up sleeping for several days and, as a result, the Amur River was left without fish. But as soon as he woke up, balance was restored and fish came back to the rivers and other bodies of water throughout the Amur region. And although this character is capable of being difficult and stern, it is extremely rare that he is. 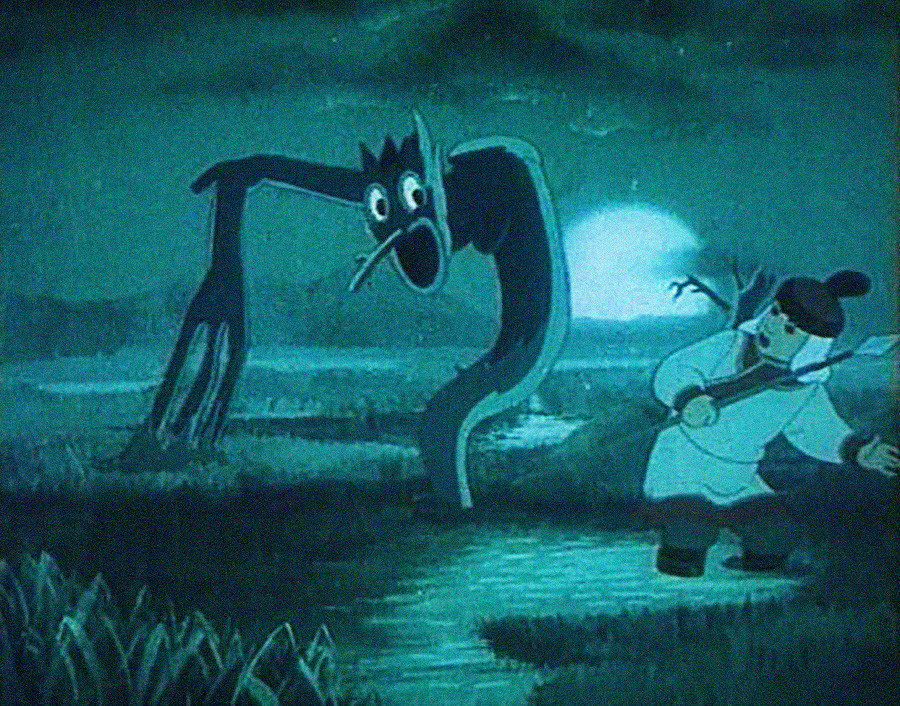 Boko the swap man from 'Heart of a brave man' animation

This creature can certainly be described as dangerous to humans. Sure, one might think, “What danger could a ‘little swamp man’ with one leg and one arm pose?” But despite numerous physical disabilities, Boko has a talent for manipulating people and tricking them to go further and deeper into swamps. Fortunately, one can get the better of him by being cunning.

Amazing as it may seem, this creature that looks like a crooked stump enjoys jumping, and what’s more jumping so high that he reaches the clouds. To trick him, dramatically express doubt that Boko can actually jump that high, and he will immediately attempt to prove his abilities to you by doing so. And while he is soaring up in the clouds, you can safely get out of the swamp. 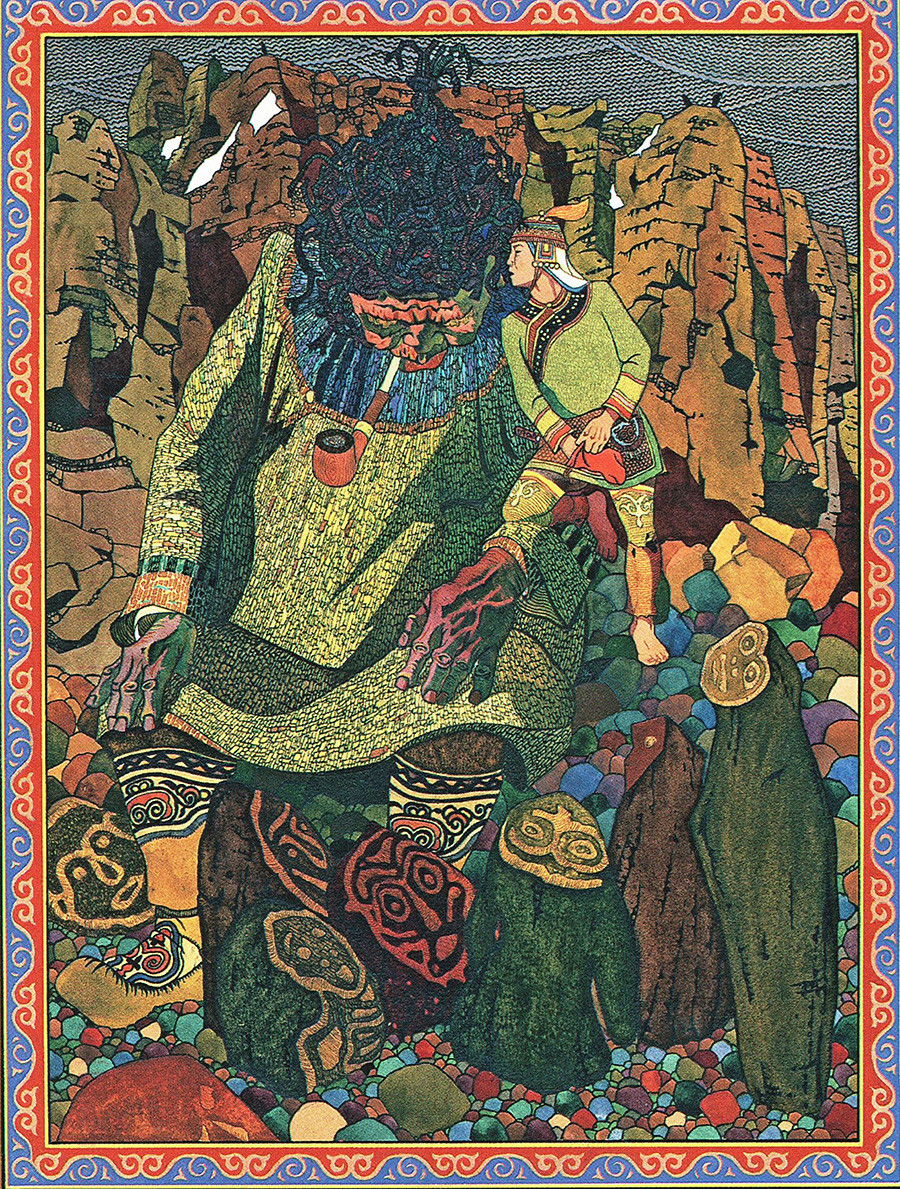 This stone giant can turn people into living stones just by touching them. These stones can talk and even move, albeit not very fast. People turned into stones still have human faculties but are no longer able to influence their fate. True, if he wants to, Kakzamu can turn stones back into humans again.

In the end, Kakzamu cannot be defeated by force. Your only hope for saving yourself is to outwit him. One ancient fairy tale hero simply challenged the giant by expressing doubt that he could turn him back into a human even if he wanted to. Naturally, after he was turned back into a man, our cunning hero fled the scene immediately. Still, you're better off not meeting Kakzamu altogether since the prospect of becoming yet another decorative stone in the giant's garden is not particularly attractive. 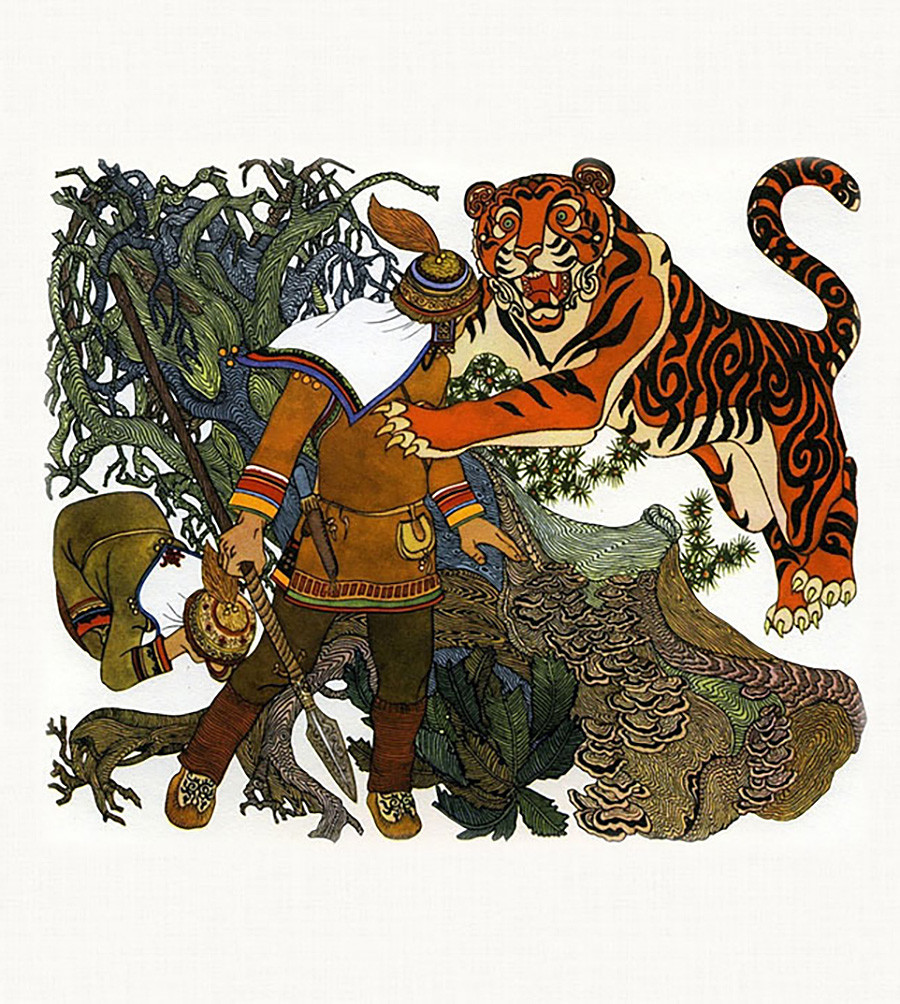 While we are all familiar with the image of the werewolf from childhood, few of us know about weretigers. These creatures, which live in the Amur region, are extremely powerful and highly intelligent. To meet them in a forest means to bring trouble upon oneself. However, things are not as scary as they might seem at first because you can actually find common ground with these creatures. In folklore, there have even been cases of humans and tiger people making families together. One old fairy tale tells the story of a tiger woman who once kidnapped a man and made him her husband. He didn't object too much. 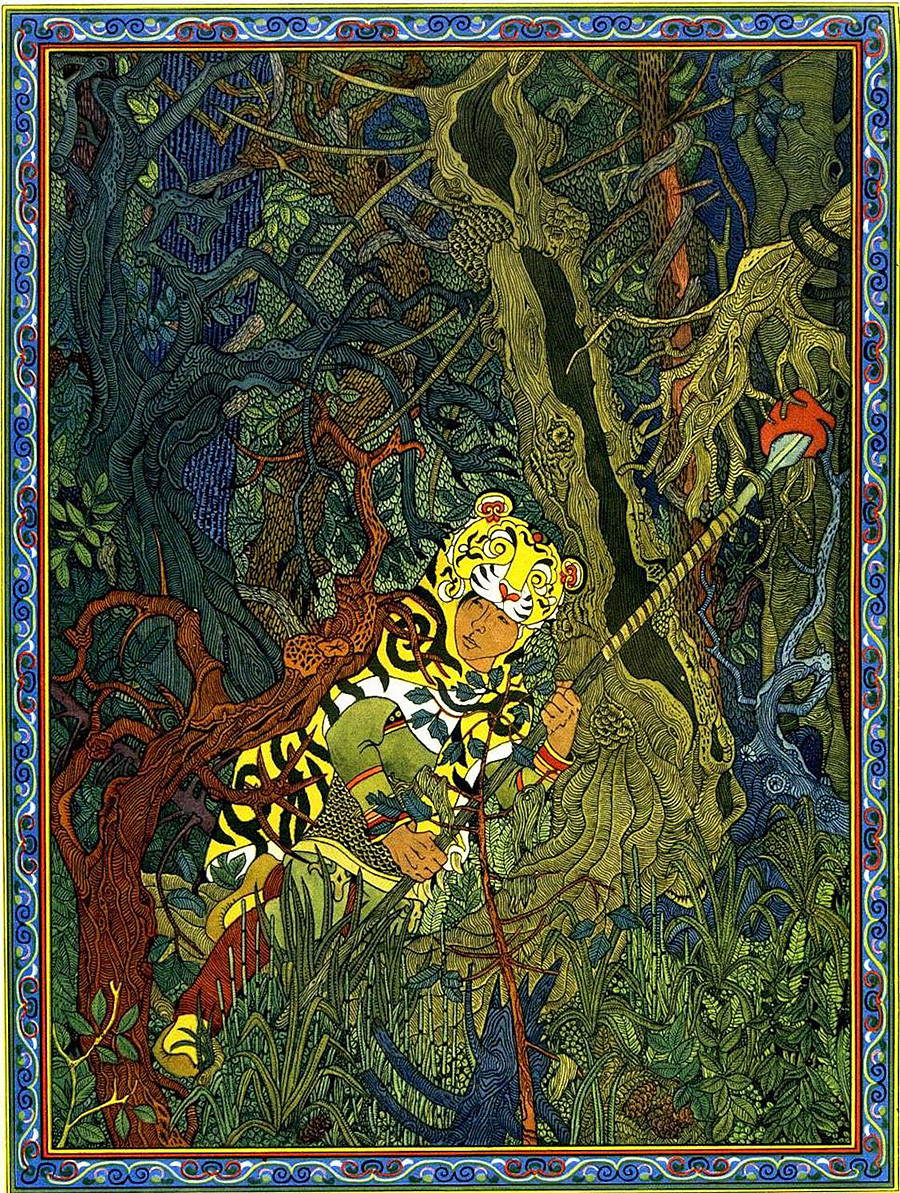 These trees have a taste for meat, including meat of the human variety. The only way to appease such a tree is by throwing it a piece of meat. Then run away. And although the tree can't run, it can reach you with its long branches as you flee. 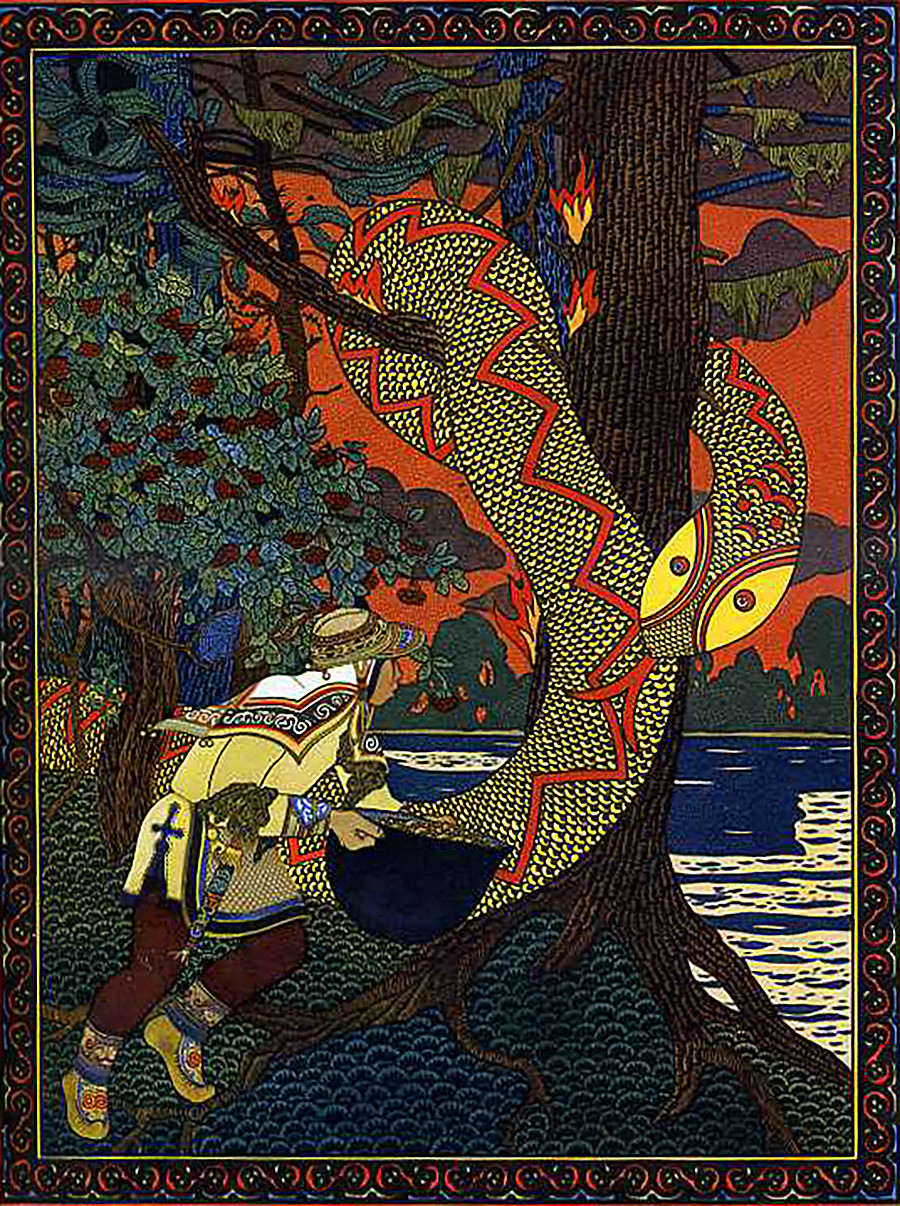 Simu the snake from 'Amur tales'

This huge snake can terrify even the bravest of people. To begin with, it is capable of spewing flames and destroying whole villages in the process. And if that weren’t enough, it is also carnivorous. Local hunters tried unsuccessfully to kill it. Only one hero was able to defeat it and not with his strength but, once again, through cunning. He simply approached the snake and, without waiting for it to spew flames at him, threw a cast iron cauldron with resin into its mouth. And that's how the snake died. 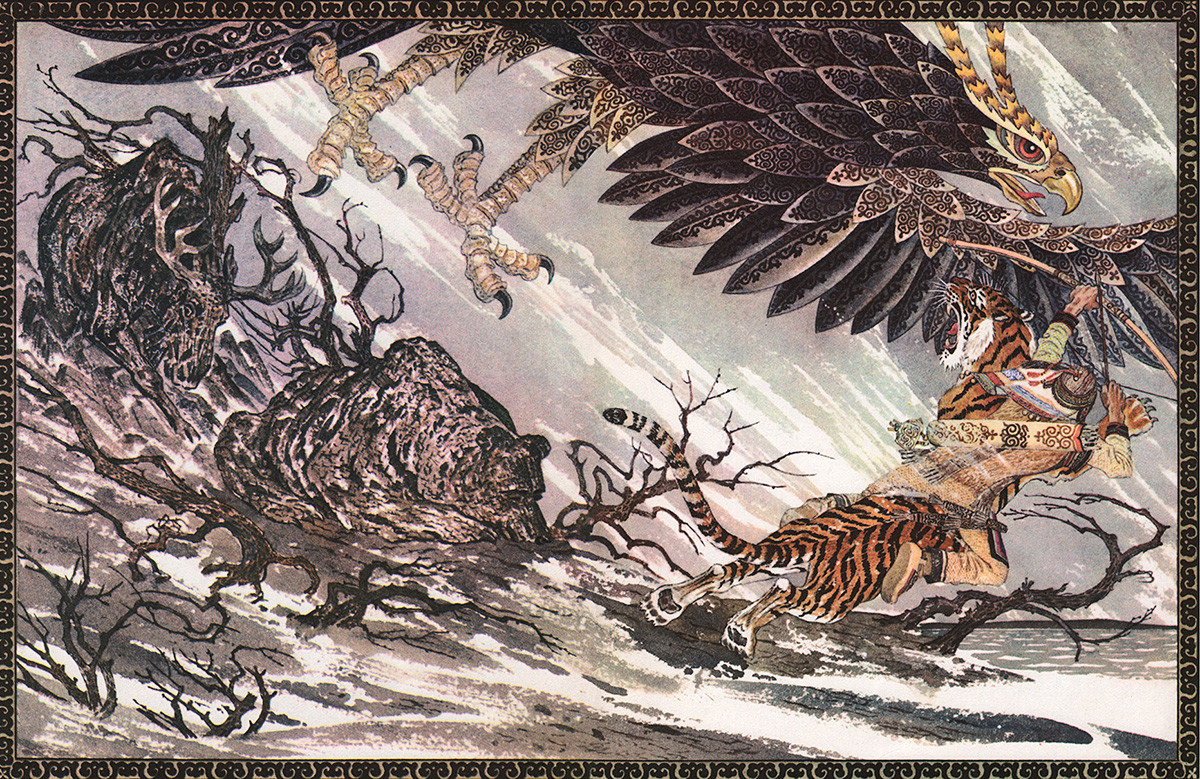 Kori the bird from 'Garlamdi, the crack shot'

Kori the bird is so enormous that it can obscure the sky. Its feathers are made of steel, its claws are tenacious and its eyes are as bright as two bonfires. An ordinary person can't defeat Kori. But you can save yourself from it in an unusual way. See, Kori the bird loves riddles. So if you come up with good riddles, Kori will try to guess them. And if he cannot solve three riddles, then the bird will let you leave in safety.

However, there is also a less prosaic way to defeat this monster: shooting an enchanted arrow into its throat, which is the main unprotected part of its body.