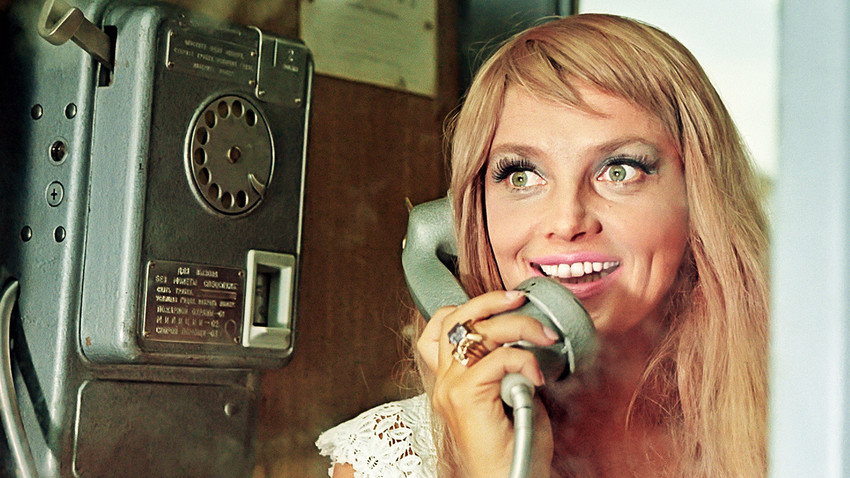 Leonid Gaidai/Mosfilm, 1973
The topic of gender equality was very much alive in the USSR. But conditions at work seldom mimicked those faced by women at home. Attempts to justify both sides were commonplace in Soviet cinema, but often created an odd mixture...

Women working in heavy construction, as engineers and as factory bosses were not strange things to see in old Soviet movies. One may be forgiven for wondering why the household situation was so much more “traditional” - for lack of a better word.

It should be noted that Soviet feminism never went the American way: putting on makeup wasn’t frowned upon as some sort of system of control in a male-dominated world. And for many strong and independent Russian women, it still isn’t. However, certain modern mutations of the philosophy would certainly make half the movies here ”problematic” (our favorite American word of the last several years). Anyhow, all of the films are classics, so you’ll have a good time either way. 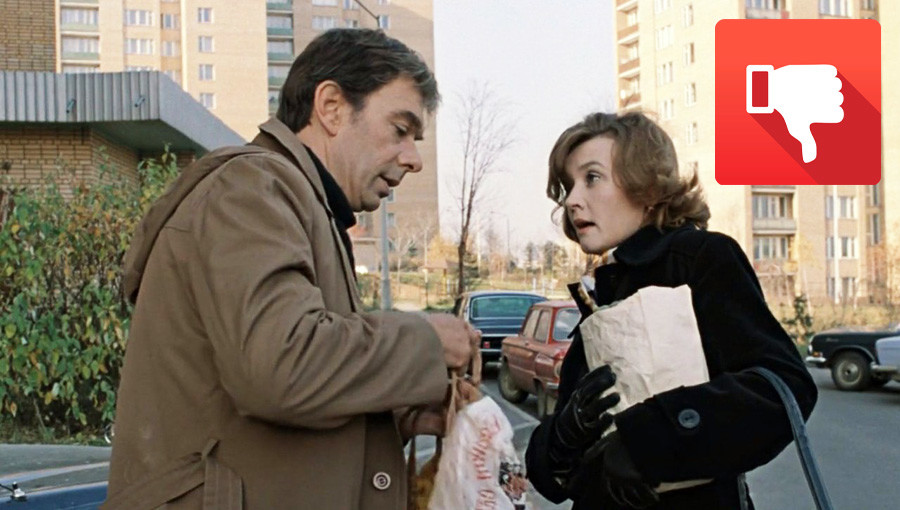 The outstanding classic that snagged an Oscar back in the day would raise some eyebrows in 2020. The story centers on three girlfriends out to “conquer” Moscow, achieve dreams and find happiness. The main hero, Katya, a strong and independent woman, achieves her dream and becomes the director of a factory, all while raising a child alone. However, she does not feel happy because she doesn’t have a man in her life. When she finally meets Gosha, who has a worse job than she does, he leaves her after finding out.  Instead of Katya being angry at him, she searches for him all over Moscow and is happy just watching him eating borsch. Katya indeed is a strong woman, but her self respect and self image would not be approved by the Third Wave Feminists of today (if not all feminists).

PASS: The Most Charming of All (самая обаятельная и привлекательная) 1985 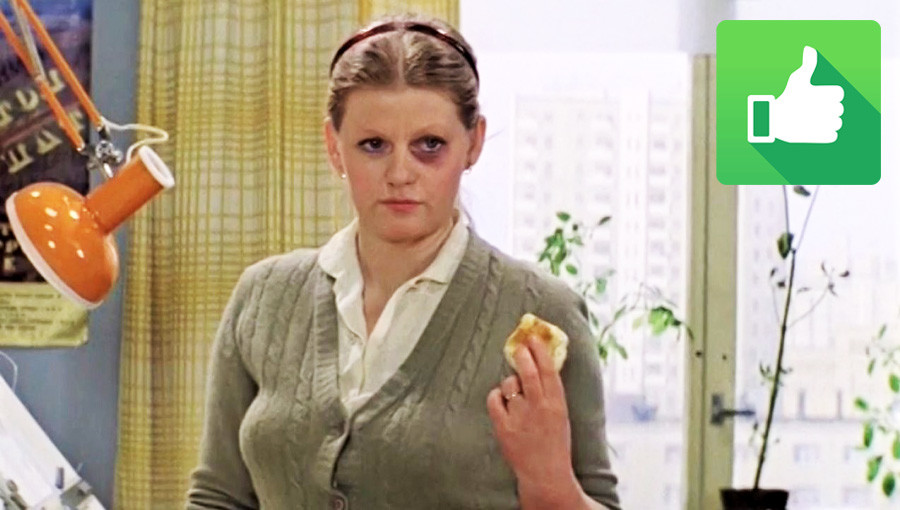 This film, one of the few Soviet movies with a Cinderella plot, centers on Nadia Klyuyeva, who is a 30-something design engineer. She has an active social life and career, and even gets involved in street fights with muggers. Her personal life, though, leaves much to be desired. To improve it, her college friend suggests that she change her look and play mind games with men. Nadia, who is a perfectionist, tries this new method and very quickly succeeds. As a result, she gets the attention, but it doesn’t make her happy, because most of it comes from unwanted men, while the man of her dreams is dating another woman. In the end, Nadia gains the experience that appearance is not key. This film passes, because in the end, she understands she shouldn’t have to become an attractive “doll” to find happiness. 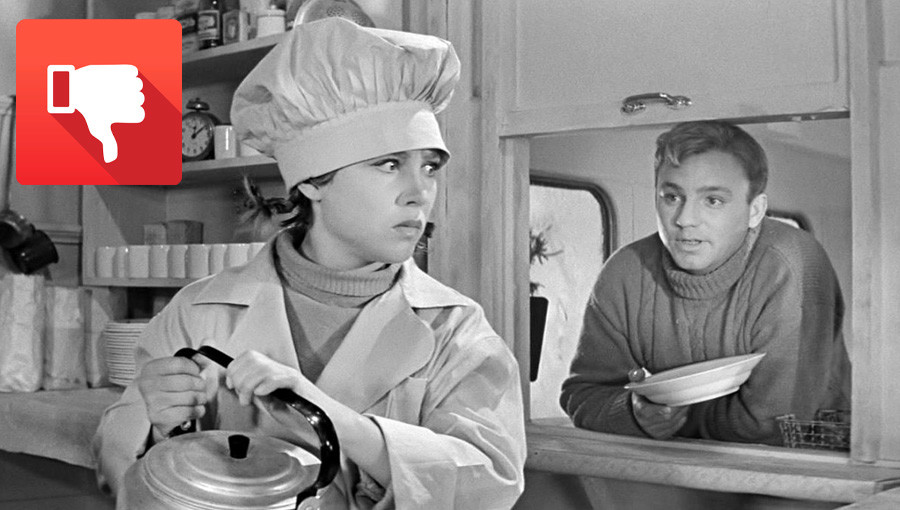 The Girls initially comes across like a kind, bright film with a happy ending. In reality, it clearly shows the double standards of the day. On the one hand, a Soviet woman, Tosya, does a lot of hard work, going alone to Siberia to build a career as a cook, all while taking part in construction work. As soon as romance is involved, the most patriarchal attitudes come alive.

Nadia marries San Sanych, an unattractive man much older than herself. The reason is explained as "Nadia is about to hit 28 and at this age you will marry even a goat."

At the same time, the most handsome man of the village, Ilya, falls in love with Tosya only when she plays mind games and rejects him, forcing him to come back to her and apologize. Although some of the characters’ (there are a few) actions come across as independent, the realities of the day weren’t always conducive to this. 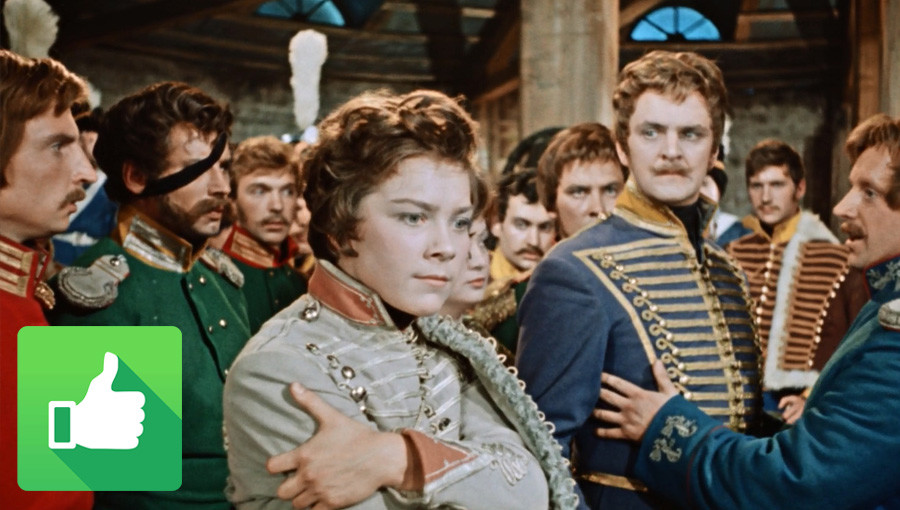 This film would easily be accepted in today’s world. Young Shura does not like the girly world of love novels. She disguises herself as a male soldier and sets off for war. She has to hide her female nature under the uniform, but it doesn’t stop her from getting respect from her fellow soldiers. The movie is based on a true story, romanticizing the adventures of the famous female soldier, Nadezhda Durova, during the Napoleonic wars. When Kutuzov finds that Shura is secretly a woman, he expels her from the army. But when he finds out that she saved an officer, things change. 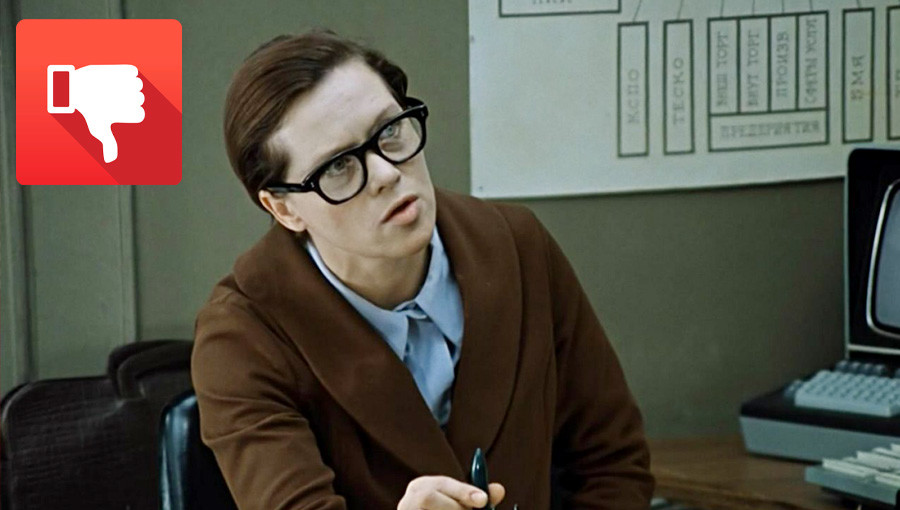 A comedy about how a mid-level  employee, Novoseltsev, on the advice of a bad friend, decides to hit on the “evil unattractive boss” - an unmarried woman, in order to advance his career. For a modern woman, watching the transformation of the heroine Lyudmila Prokofievna, will probably raise some questions about how this movie fits with the feminist ideas of the time. In the beginning of the movie, she is an unattractive woman in an ugly suit, but she is very successful, being Director at a big polling agency. Everybody is afraid of her and calls her names behind her back, mocking her appearance. Soon we see her transformation as she takes style advice from her secretary and buys beautiful dresses, does her hair, and starts using makeup. Only after that she seems cheerful and kind to people. The Film suggests that the life achievements of a woman who becomes boss at age of 36 are worthless if she does not have a man and she doesn’t use makeup or follow trends. 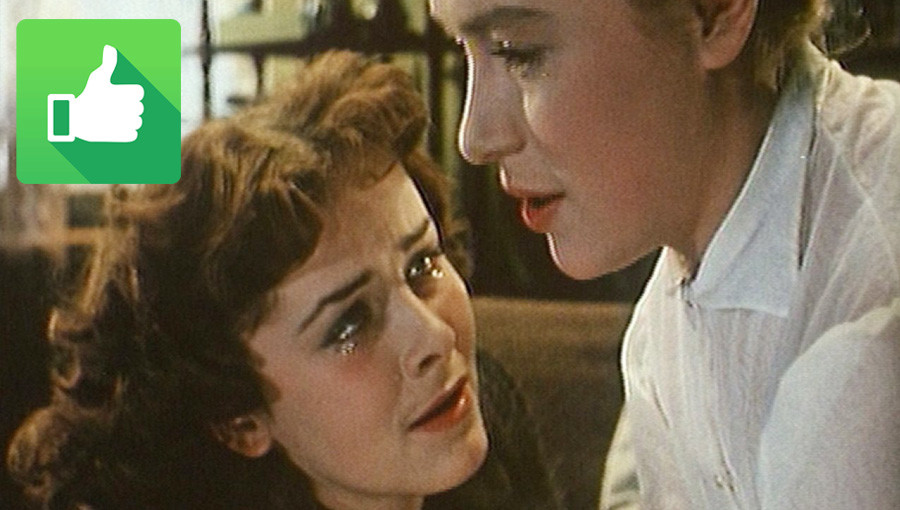 A classic drama about three girlfriends who graduate high school together: Tanya enters medical school, Kira is admitted to the acting department of a theater school, and Svetlana fails the college admission and then lies to her family about it.

Tanya falls in love with the medical graduate student, Arkady, who charms her very quickly. For her, it is true love, but for him it is just a brief romance. When Tanya cannot go to the dance party, Arkady still goes to meet Tanya’s friend Kira. He ultimately dumps Tanya for Kira, and even proposes to her. Later Kira and Tanya learn that they were both deceived by Arkady. The women do not fight over the man – they end their relationship with him, and choose their friendship over him while continuing to pursue their dreams together. In the end, this is a film about female friendship and a commitment to that. 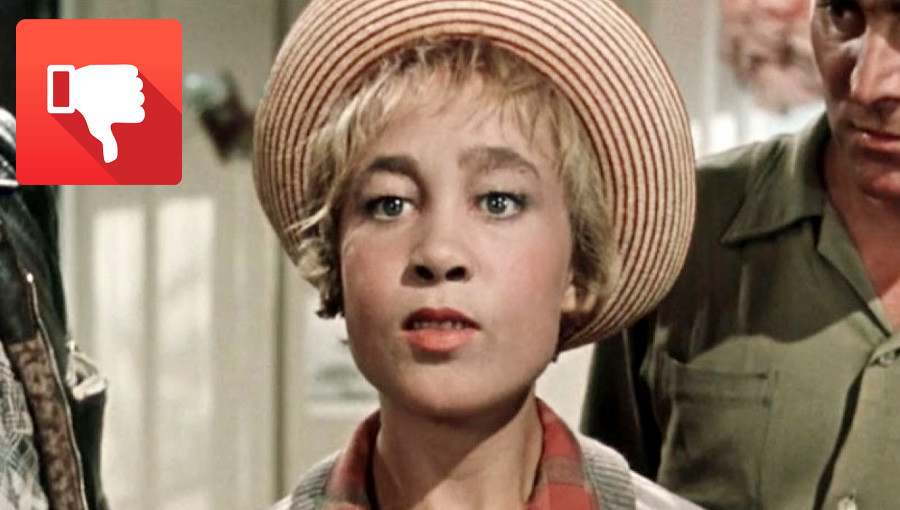 The main character, Lyudmila cannot rise in the social hierarchy and get her desired job, because she is temporarily unattractive after being stung by bees. The film shows that the beauty of a woman is ultimately related to her ability to be successful. Her appearance becomes a reason for rude jokes and mockery. In the end, after the swelling subsides and, again, Lyudmila becomes herself, they immediately begin to pay attention to her again. 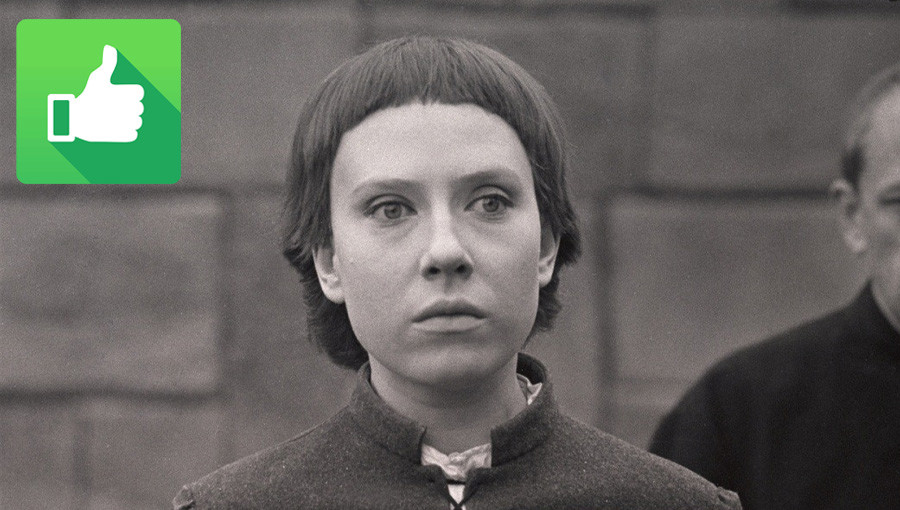 Pasha Stroganova gets an invitation to play Joan of Arc in a big movie. The actress and the director of the film start an affair, but he is married. Remaining strong, Pasha ignores her feelings, but does not refuse the role. Posters with her image are plastered all over the city, she is recognized in the street and the audience loves her, but other directors won’t work with her. In the end Pasha is able to get through all these difficulties. She follows her dreams and becomes successful, proving that all are equal, regardless of gender, and one can forge their own path. 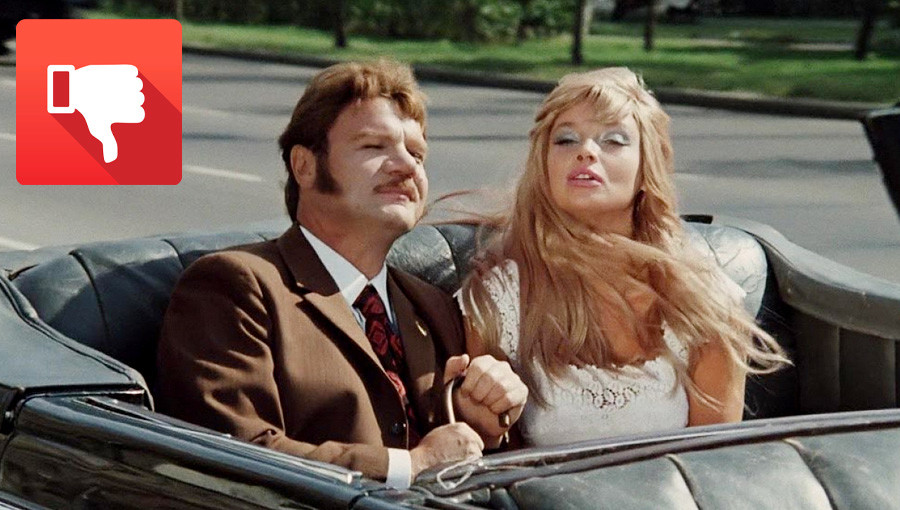 The cult Soviet comedy “Ivan Vasilievich” by director Leonid Gaidai is about an engineer who invents a portal to the 16th century. This film cannot easily be watched through the lens of the “Me Too” era. In the film, the substitute Tsar, Ivan the Terrible, gets drunk and flirts with both Tsarina and all the other women of his court, while forgetting everyone's name. Meanwhile, a blonde actress tries to seduce Yakin, a Film Director, to get better roles and free vacations. Lastly, the personality of the neighbor Uliana Andrevna is that of a quintessential gossiper interfering with everyone’s personal business. 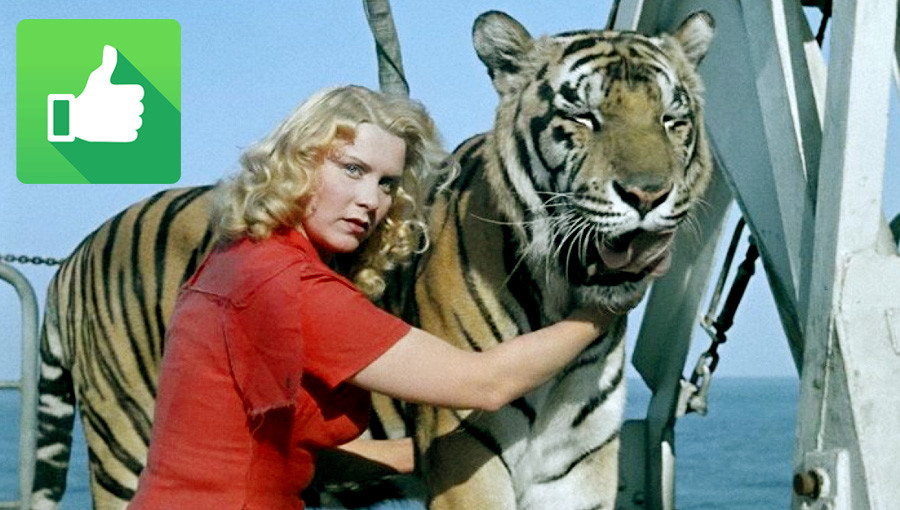 A series of mysterious incidents occur aboard a cargo vessel. The crew finds the tigers have escaped their cages and roaming around the ship, together with other animals. The crew, hiding in fear, calls a professional, but he, fleeing the predators himself, climbs into the tiger cage and locks himself from the inside. When it seems that there is no way out, bartender Marianna takes everything into her own hands and drives the predators into the cages,carrying out her own investigation in the process.