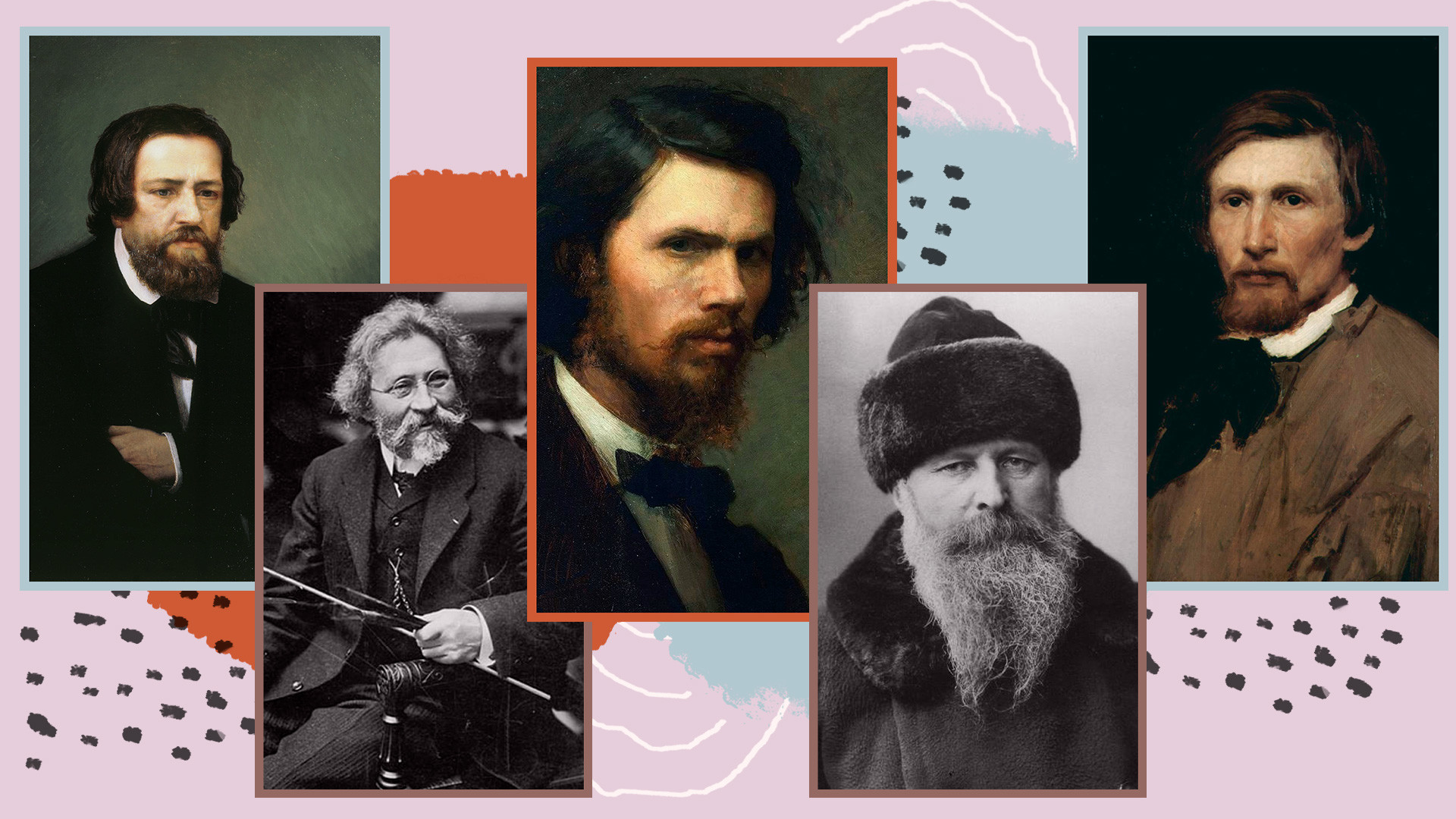 Tretyakov Gallery, Public domain, s.salvador/Freepik.com
Sometimes the eccentricities of creative people seem quaint to others, but at other times people find them really scary. How did Ilya Repin, Viktor Vasnetsov or Vasily Vereshchagin shock those around them?

The artist spent more than 20 years in Italy working on his famous painting The Appearance of Christ Before the People. At times he lived in grinding poverty, and over time the painting began literally to destroy him: His eyesight deteriorated from hard work; furthermore, his few acquaintances began to notice some oddities in his behavior.

According to writer Pavel Kovalevsky, "he was an unsociable individual who was startled every time someone new walked in, who assiduously bowed to servants, taking them for their masters - a man with quick movements and restless, albeit always downcast, eyes." 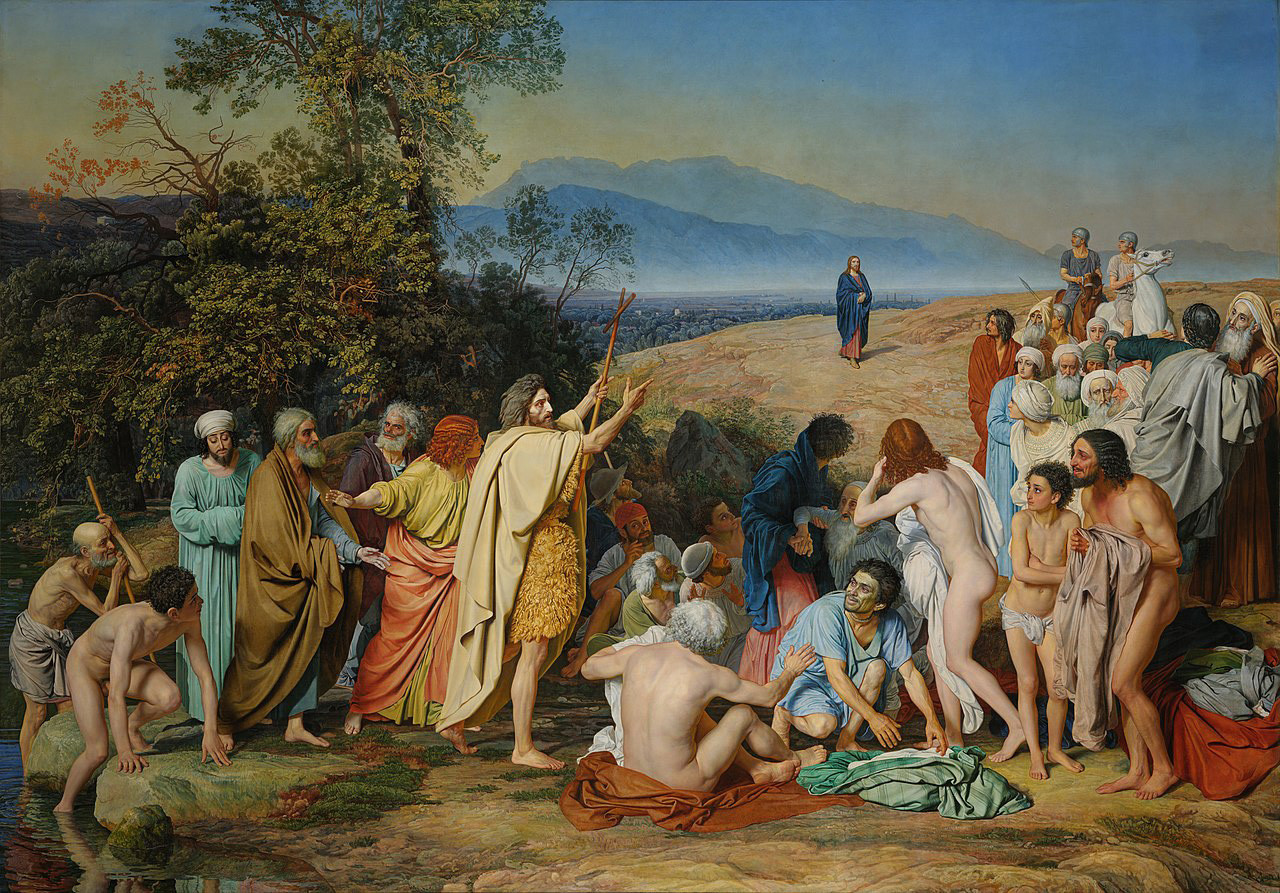 he Appearance of Christ Before the People.

Ivan Turgenev recalled how Ivanov had emphatically declined an invitation to dine at the Hotel d'Angleterre in Rome, claiming that he would certainly be poisoned there. He was convinced that envious Italian artists had decided to murder him, and agreed to eat only at the Trattoria Falcone, as, according to Ivanov, the only honest waiter worked there.

Kramskoi is described as one of the most outstanding Russian portrait painters of the second half of the 19th century. Although by the end of the 1860s he had become quite a famous artist and had no shortage of customers, the painter was remembered as being rather parsimonious with his money. At the same time, his acquaintances noted one oddity: Unlike many of his colleagues, he delivered his paintings to customers expensively framed but didn't charge any extra for this. One of his customers was reported to have pointed out this oddity to Kramskoi, saying that good frames cost a lot of money and that the artist was losing several thousands of rubles a year by not charging for them. 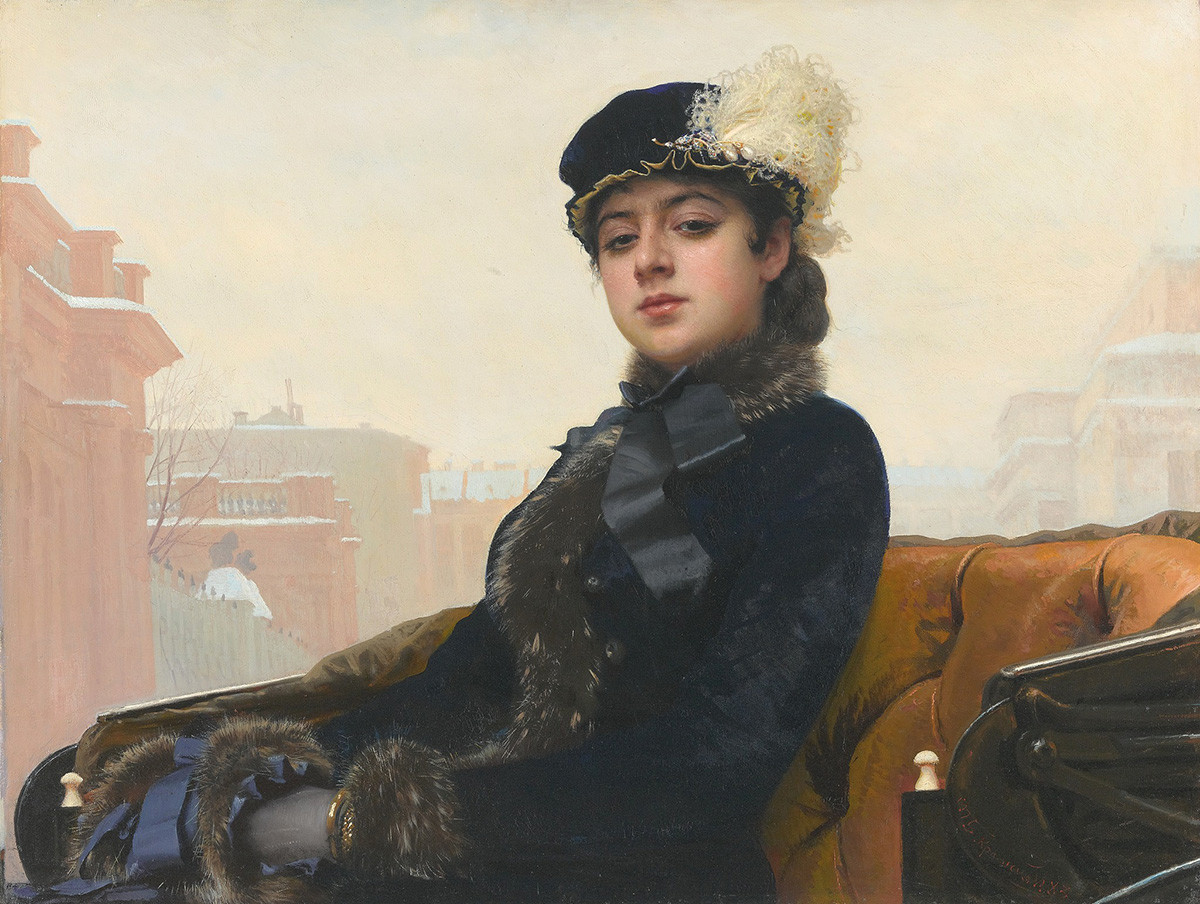 Portrait of an Unknown Woman.

Kramskoi was even offended by the remarks and said he believed it was simply impolite to hand a portrait to a customer unframed, since pictures that hang on walls are always framed. The customer pressed him further: "But you give a portrait to the customer because it is you who painted it, but the frame is made for you and you have to pay money for it." Kramskoi stood his ground: "I also pay money for the paints which I don't make either, and for the brushes, and the canvas… Does it mean that the customer has to pay for them too?"

The artist was well known far beyond Russia. In August 1888 the New York newspaper Evening Star wrote: "To step out of the daylight and rattle and busy jostling of 23rd Street into the subdued artificial light, the bizarre arrangements of strange effects and the musky odors of the building containing the celebrated paintings, is like stepping into another world, so strange is the interior of the Verestchagin [sic] gallery in its contrast with the scenes one has just left outside."

Until then no paintings by a Russian artist had ever aroused such interest among the American public, nor had an exhibition become such a significant event - the author of the article called it "the most theatrical entertainment in New York just now". 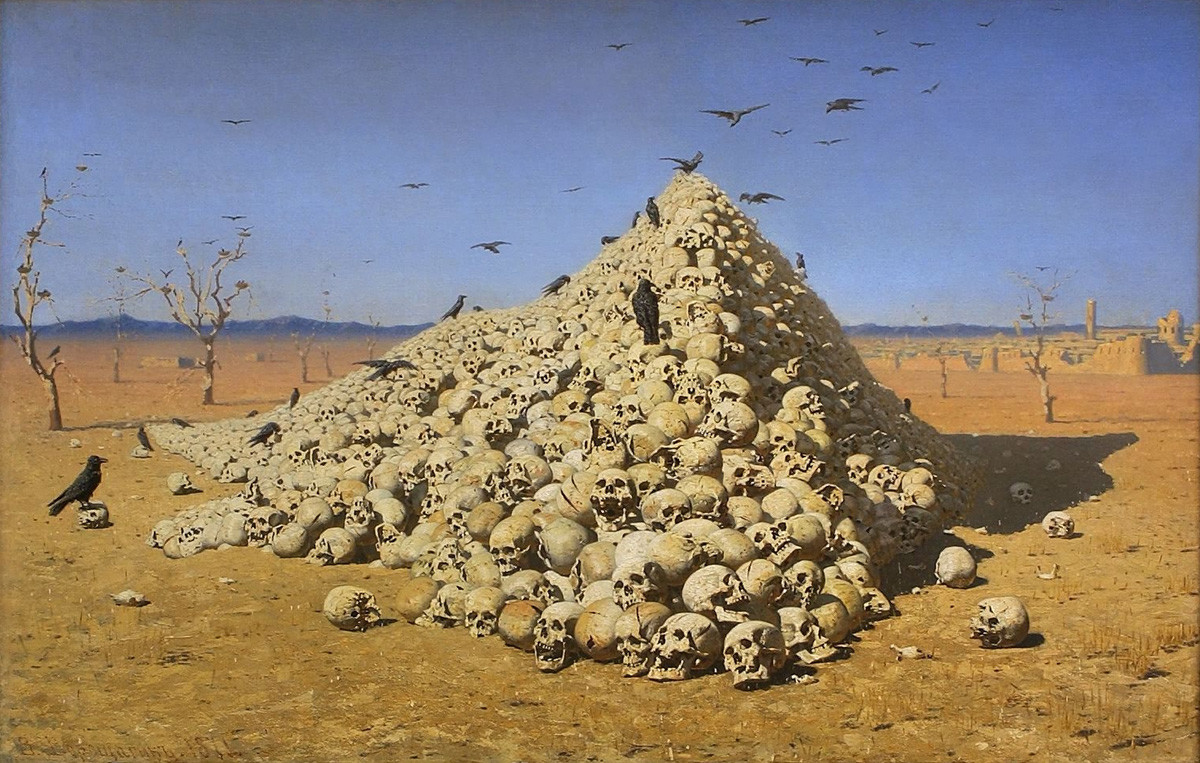 Despite the fact that Vereshchagin's pictures attracted great public interest, the artist was very concerned that his works should have the media coverage he felt they deserved.

Artist Mikhail Nesterov recalled how Vereshchagin had personally edited articles about an exhibition of his work in Odessa: "A critic gives him an enthusiastic review to read that he has written for the following day. Vasily scans it rapidly and frowns, dissatisfied. "Give me a pencil," he says. He hurriedly takes the sheet of paper and writes and writes. When it is ready, he hands it over. "This is how you write about the Vereshchagin exhibition." The critic is embarrassed and overwhelmed by the rapidity and vehemence of the famous painter of battle scenes… The following day, a Sunday, the article appears in Odessa News in the version "edited" by Vasily. Everyone everywhere reads it, dashes off to see the Vereshchagin exhibition and praises Vereshchagin, who is so insatiable and jealous as regards his own fame."

Every Russian knows The Bogatyrs, Alyonushka and The Knight at the Crossroads from childhood. The author of these works based on themes from Russian legendswas not only a painter but also a great lover of music, although he was not musically talented himself. The artist did realize that his singing gave no enjoyment to those around him and usually restrained himself. But at home, while working, he would get carried away and start humming some tune, first quietly and then louder and louder. Laughing, he once told the following story: "I was working, working, and, without realizing it, I started singing out loud, and little Misha (aged six) came up to me and said, very seriously: Daddy, don't sing. When you sing, it frightens me." 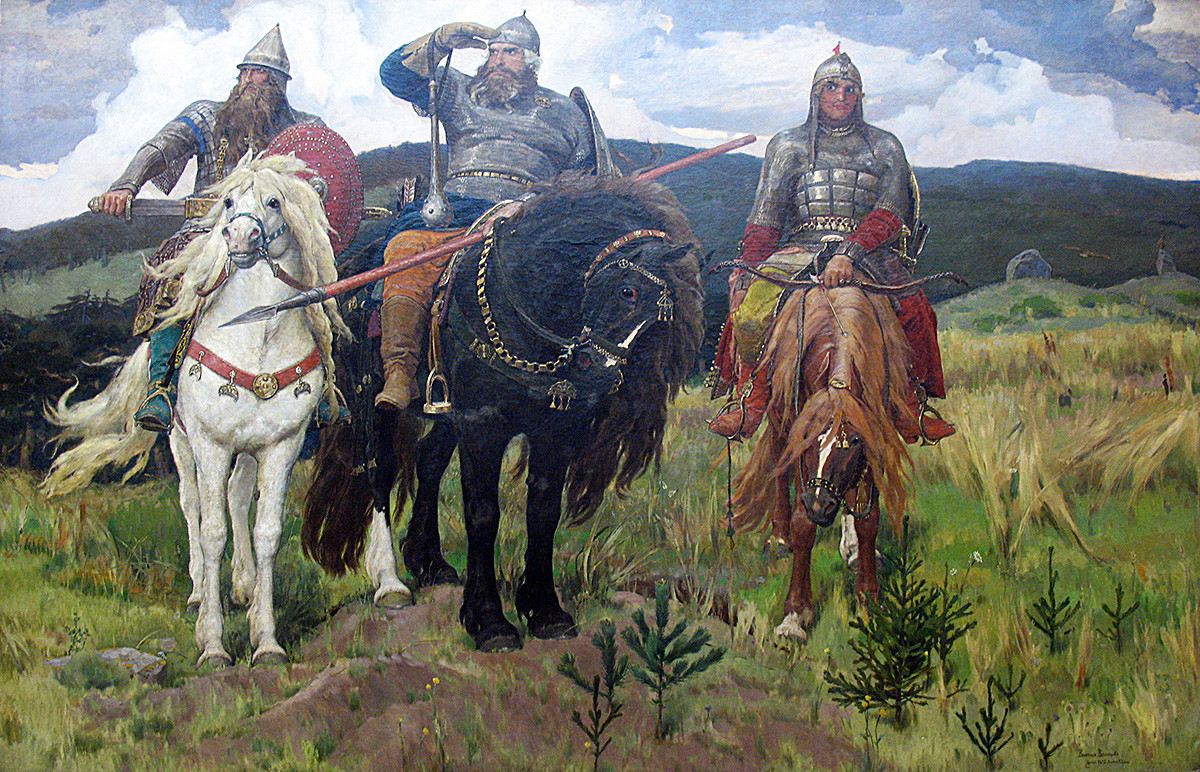 Fortunately, no recordings of Vasnetsov's singing have survived and nowadays viewers can enjoy his paintings without a soundtrack of his singing being inflicted on them.

Although artist Ilya Repin was a very wealthy man, he had a reputation for being pathologically stingy. For instance, he preferred to travel to St. Petersburg from his Penaty country estate in the mornings - at that hour a tram ticket cost half what it did later in the day.

Over the years Repin embarked on a lifestyle that he himself thought was very healthy. Nowadays no one would be surprised by someone's passion for vegetarianism or a raw food diet, but at the beginning of the 20th century it was unusual.

Once Repin invited famous writer Ivan Bunin to visit. Bunin recalled later: "I gladly hurried to see him: After all, it was such an honor to be painted by Repin! There I was, on a splendid sunny morning, in the freezing cold. The courtyard of Repin's dacha - at the time the artist was mad about vegetarianism and fresh air - was covered in deep snow, and the windows of the house were wide open. Repin greeted me in his valenki [felt boots], a fur coat and fur hat; he kissed and hugged me, led me to his studio, in which it was also freezing, and said: "Here is where I am going to paint you in the mornings, and then we shall have breakfast as Our Lord ordered: Grass, my dear chap, grass! And you will see how it cleanses both your body and soul, and soon you will even quit smoking your damned tobacco."

I started to bow low and express my profuse gratitude, and mumbled that I would come back the following day, but that right now I had to rush back to the railway station because I had some terribly urgent business in St. Petersburg. So I dashed off to the station and headed straight to the bar, ordered some vodka, lit a cigarette, jumped on the train and sent a telegram from St. Petersburg which said: Dear Ilya Yefimovich, I really am in utter despair as I have been urgently summoned to Moscow, and am leaving today…"

So in the end Ilya Repin never painted a portrait of Ivan Bunin, who in 1933 was awarded the Nobel Prize for Literature.