Americans had Mr. Rogers, but Soviet kids got Good Night, Little Ones! 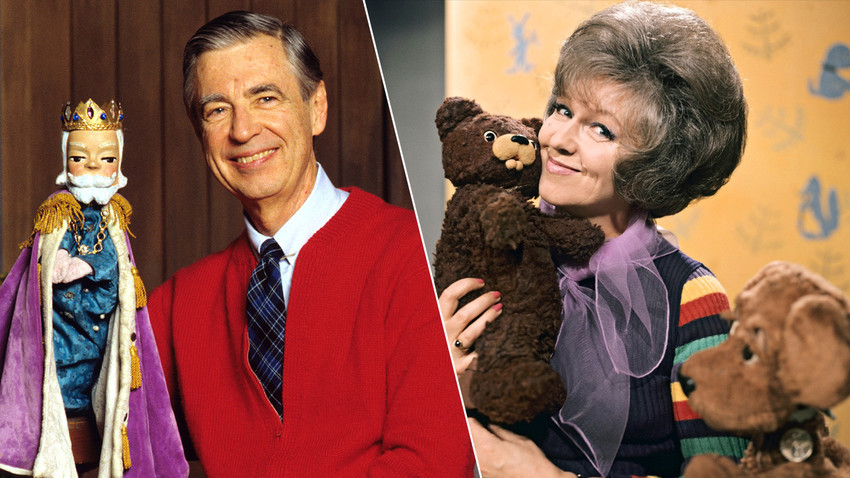 Fred Rogers, the host of the popular American children’s show Mister Rogers’ Neighbourhood, passed away from stomach cancer in 2003. However, the 2018 documentary Won’t You Be My Neighbour? shot him back into the public consciousness. What’s more, Tom Hanks was nominated for an Oscar this month for his portrayal of Rogers in the 2019 biopic A Beautiful Day In The Neighbourhood. 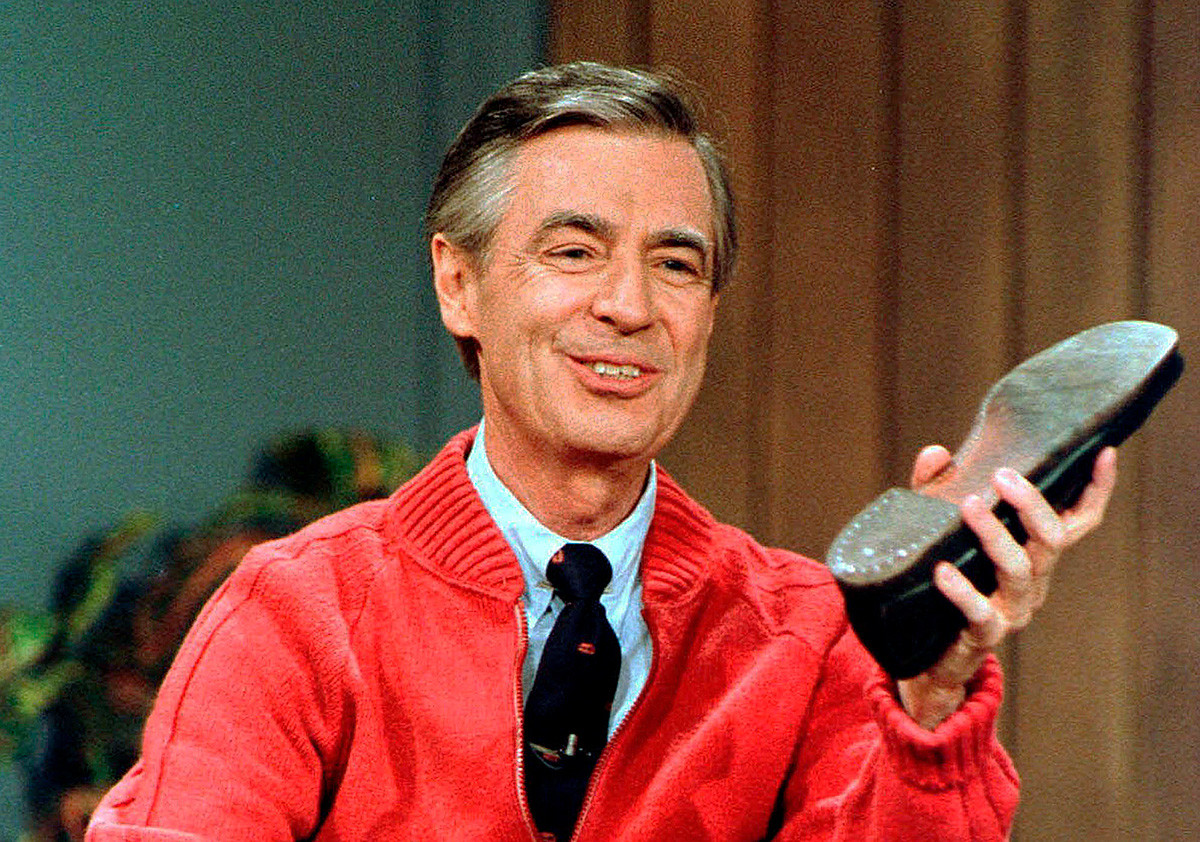 Fred Rogers rehearses the opening of his PBS show "Mister Rogers' Neighborhood" during a taping in Pittsburgh, 1989

With posthumous praise rolling in from TIME Magazine to former U.S. presidents, Mr. Rogers has been enshrined as a champion of children’s entertainment everywhere, with emphasis on the gentle way he explored complicated subjects with children as young as three. But while his fame at one point reached as far as the Soviet Union, he of course was far from the TV presence that brought comfort and poignancy to children living behind the Iron Curtain. But they did have a decent alternative – kids growing up in the Soviet republics had long fallen under the spell of a different, local production: Спокойной ночи малыши! (“Good Night, Little Ones!”)

Good Night premiered in 1964 and still runs to this day, its format changing little over time. It often begins after the news or weather (as it currently does, at 8:50pm in Moscow – the usual bedtime for most kids under 10), with an adult host being joined by a number of animal puppets for a short sketch. They might have a conversation or do a task, which then leads to some discovery, joke or life lesson. 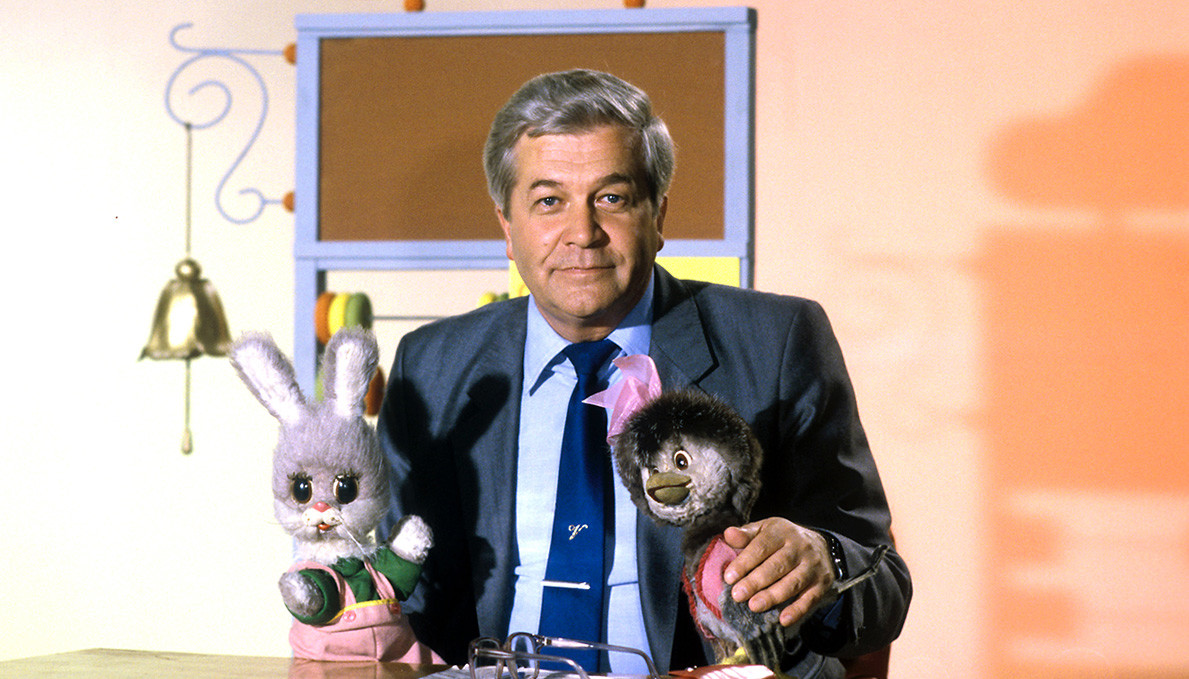 As the hosts constantly changed over time, the puppets became the heart and soul of Good Night, Little Ones!. Some of the original puppets include ‘Filya’ the dog, ‘Khryushka’ the piglet and ‘Stepashka’ the bunny, with others like ‘Karkusha’ the crow and ‘Mishutka’ the bear joining over the decades. And they’ve long since become icons in their own right.

Together with the host, the puppets would finish their antics and introduce a short animation, usually taken from the archives of Soyuzmultfilm, the main (and only) Soviet animation studio. The cartoons were always short, often under five minutes, but were remarkably rich in content for their time constraints. 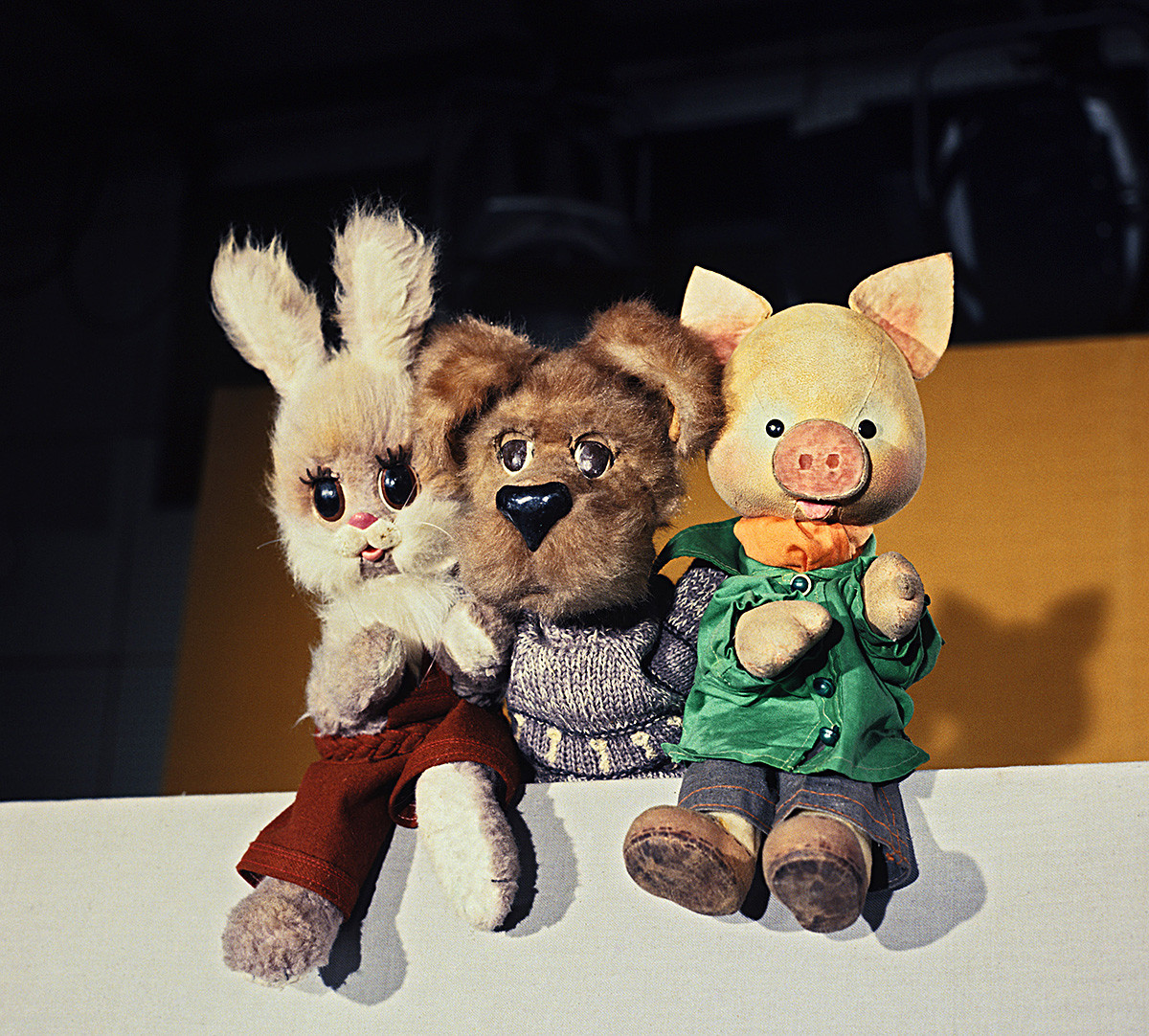 Characters of "Goog Night, Little Ones" pictured L-R: ‘Stepashka’ the bunny, ‘Filya’ the dog, and ‘Khryushka’ the piglet

Their compact nature runs against the grain of today’s media landscape, where flashy YouTube clips aim merely at generating clicks, or where studios turn out bloated blockbusters and streaming series. Good Night created a sense of ritual – it was something that had to be anticipated (and rewarded that anticipation). It nestled in children’s minds like an anchor that brought stability through decades disrupted by the Cold War or perestroika. Beloved characters like Stepashka or Khryushka would remain the same, while the children who watched grew up and introduced the puppets to their own sons and daughters. In another act of magic, the show survived the collapse of the very country that produced it.

Much of its staying power, it has to be said, comes from the animation gems stocked in the Soyuzmultfilm archives. You have icons like ‘Cheburashka’ and the Soviet version of Winnie the Pooh, combined with favourites like ‘Neznaika’ (a character whose name literally means “know-nothing” in English). Many cartoons were longer than 10 minutes and had to be cut into parts and shown over a series of days. 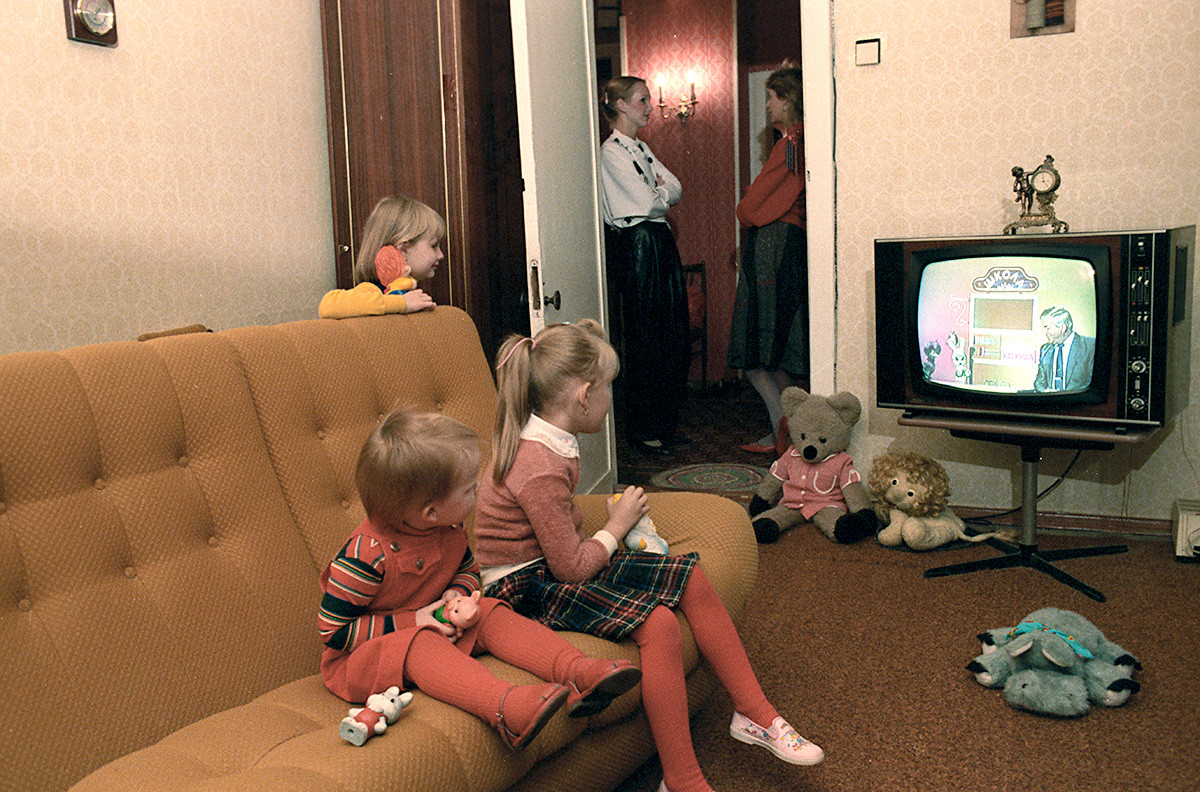 The cartoons were generally funny and enthralling, but Good Night sometimes showed stranger fare that was no less beloved. Some of these were clips from longer films based on fairy tales like Rusalochka (“The Little Mermaid”) or The Scarlet Flower (similar to “Beauty and the Beast”). The animation was stunning and the themes mature, even unnerving at times.

One of the more famous of these darker clips is Ёжик в тумане (“Hedgehog in the Fog”), an existential, nearly plotless piece that nevertheless builds an unforgettable, dreamlike landscape. It regularly lands on lists of the greatest animated films of all time. 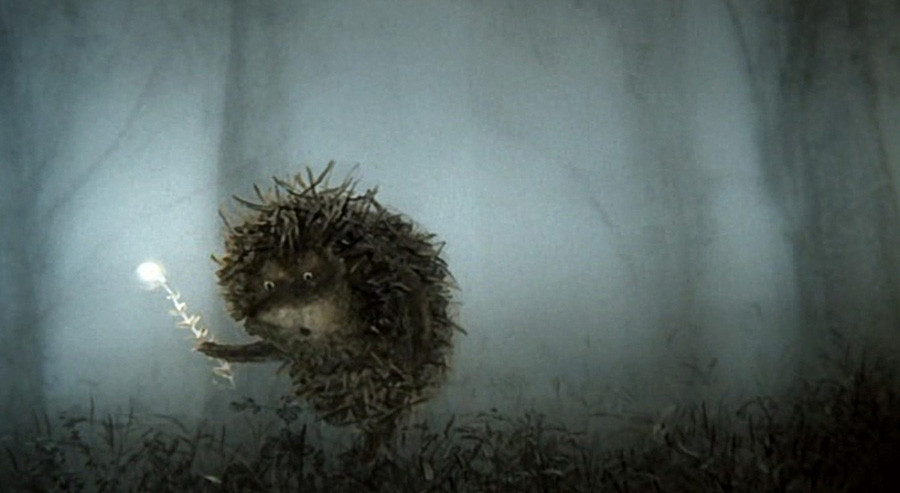 Hedgehog in the Fog

As was mentioned in a recent Russia Beyond article about The Snow Queen, another Soyuzmultfilm production, what makes these animations unique is their ability to combine childlike innocence with the darker realities of the adult world. This is something that Mr. Rogers himself strived for in his scripts, though in a less surreal way.

This aesthetic, combining both dark and light in a way that children were able to appreciate, found resonance with many animators emerging at the tail end of the Cold War. Hiyao Miyazaki, who made many of his masterpieces in the 80’s, described Hedgehog as one of his major inspirations. Animator Don Bluth, responsible for The Land Before Time and All Dogs Go To Heaven animated movies, had to leave Disney (and become its main competitor) in order to explore a similar sensibility.

But while the impact of Soyuzmultfilm’s programs on world animation is still being determined, Good Night Little Ones! has remained influential enough to draw in some of the biggest guests in children’s entertainment. These Soviet puppets met America’s Muppets in a 1988 TV special called Free to Be... a Family, and both Khryushka and Stepashka met Disney’s original star in 1989’s Mickey Goes To Moscow. Mr. Rogers himself featured on the Soviet show, also in 1988, and invited both host and puppets onto his own program. 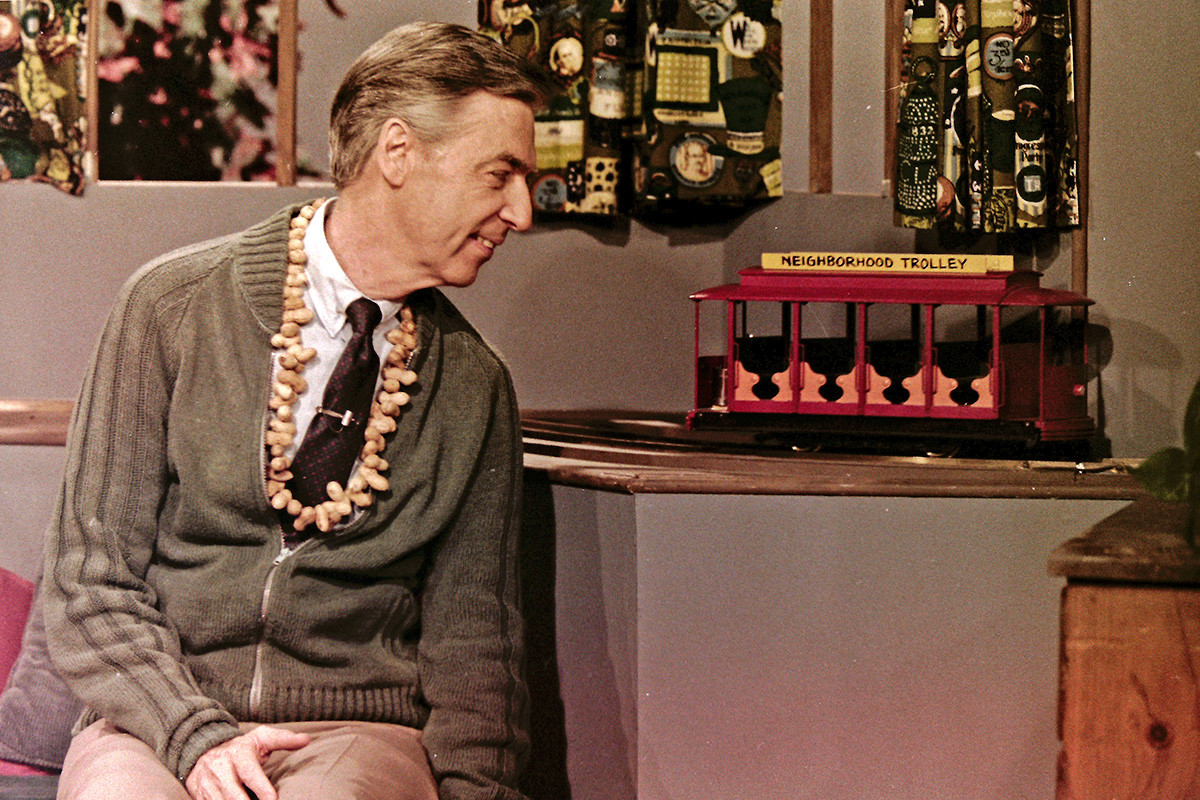 The puppets have remained relevant well into the present day, with Khryushka and Stepashka starring (as grown-up, and significantly cruder, animals) in a satirical sketch comedy called Turn Off The Light! Even after the show’s cancellation they’ve made appearances in outlets like Novaya Gazeta and Echo of Moscow.

But even though their older selves speak to the Russia of today, the icons of Good Night remain immortal as the childhood companions they always were. And the original program still goes on – still short, still free of clickbait, and dated in a way that proves refreshing, offering comfort to the children of children who themselves grew up under their spell. They continue to introduce the same timeless gems they did decades ago, a pillar of comfort in a world that’s changing more rapidly than any of us may be ready for. Long may they reign.