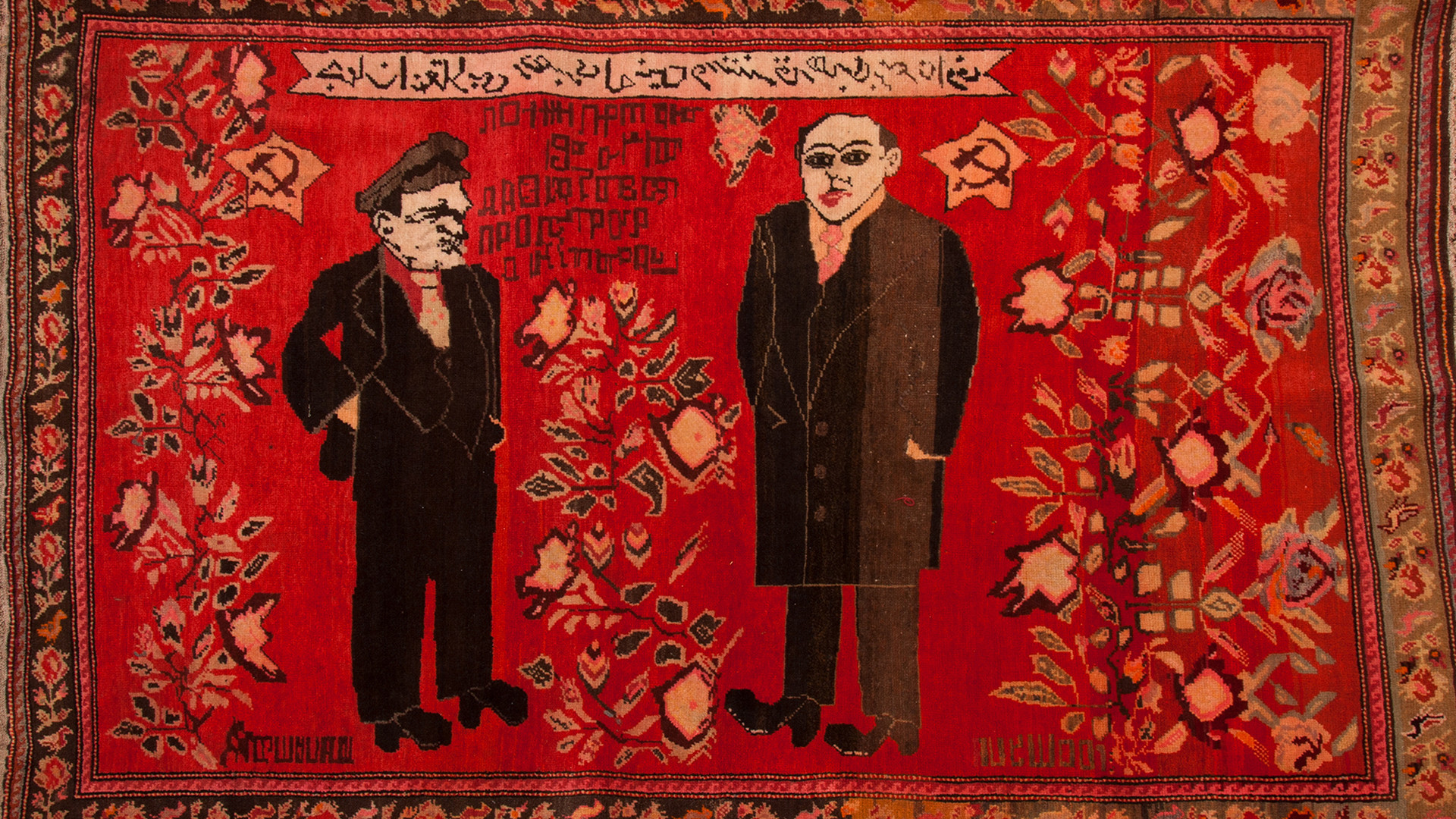 The State Museum of Oriental Art
Agitation posters were woven and became popular decorative elements on walls at home and in the office.

The oriental carpet is one of the most recognizable symbols of Soviet life. Every family dreamed of buying a genuine oriental carpet. People hung expensive wool canvases on walls that served not only as a decoration but which also gave additional warmth during the harsh winters.

Taking into account this popular sentiment, savvy Soviet authorities decided to use carpets as a propaganda tool. They ordered to weave and embroider the glorious moments of the Bolshevik Revolution, scenes depicting the successes of Soviet industries, and of course, portraits of the country’s leaders.

While master weavers continued to create traditional carpets, they also made some unique items that combined oriental motifs and political agitation images in an unusual and interesting way. Here are some of the most interesting examples of exclusive carpets produced in the 1920-70s in the Azerbaijani Soviet republic.

1. ‘Leader of the world revolution, Vladimir Lenin, and leader of the East, Nariman Narimanov,’ carpet, 1920 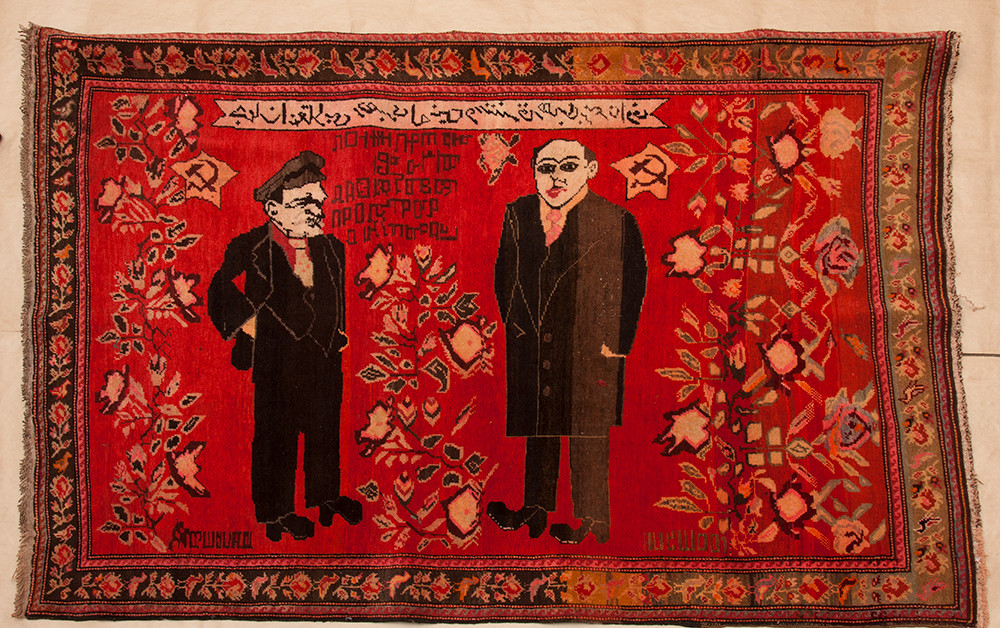 Nariman Narimanov was an Azerbaijani Bolshevik and Lenin’s comrade. 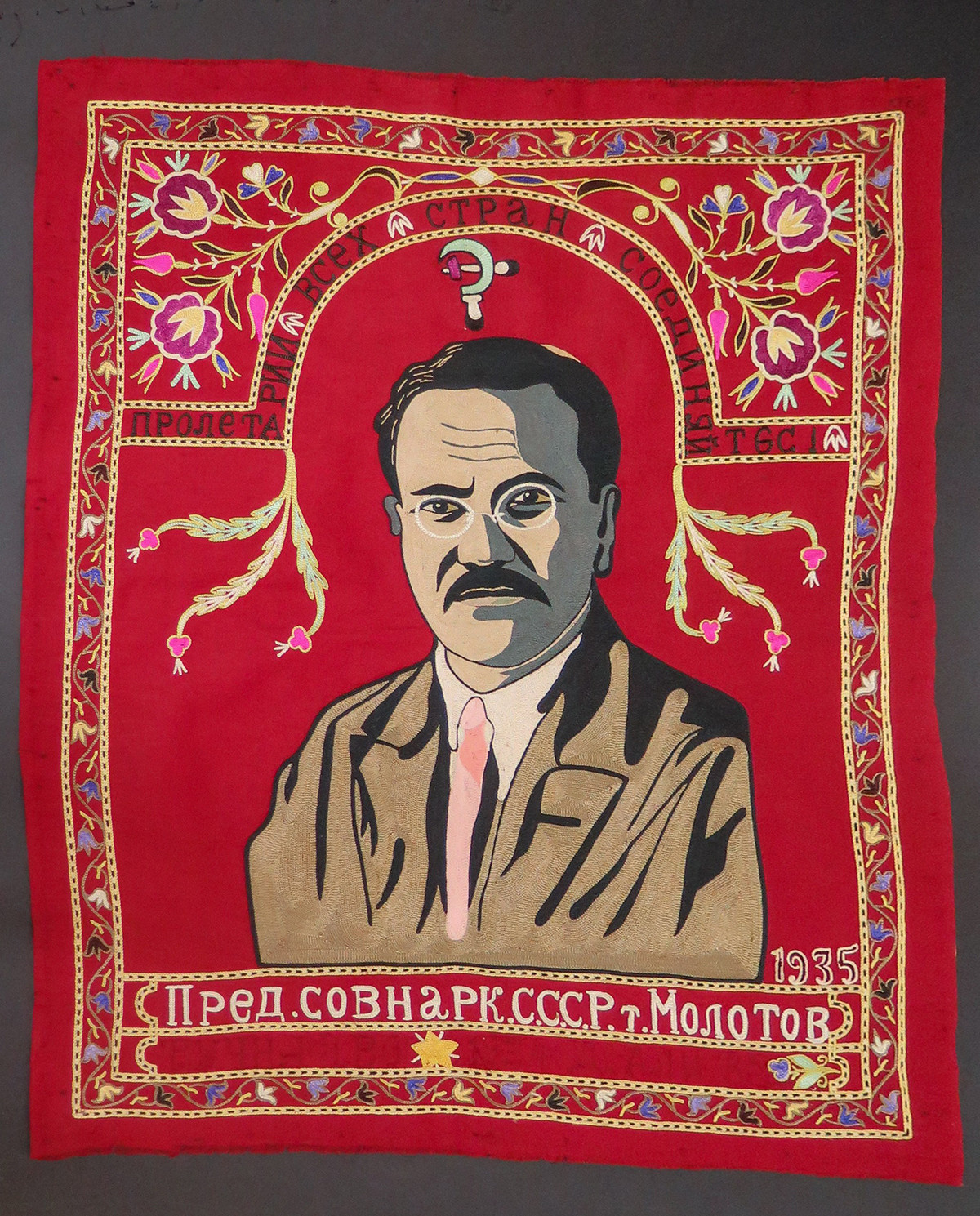 This portrait of the famous and long-term Soviet prime minister (Chairman of the Council of People's Commissars of the Soviet Union) was embroidered with silk yarn on this 71х61 cm red cotton canvas, along with a Soviet revolutionary slogan: “Workers of the world, unite!” 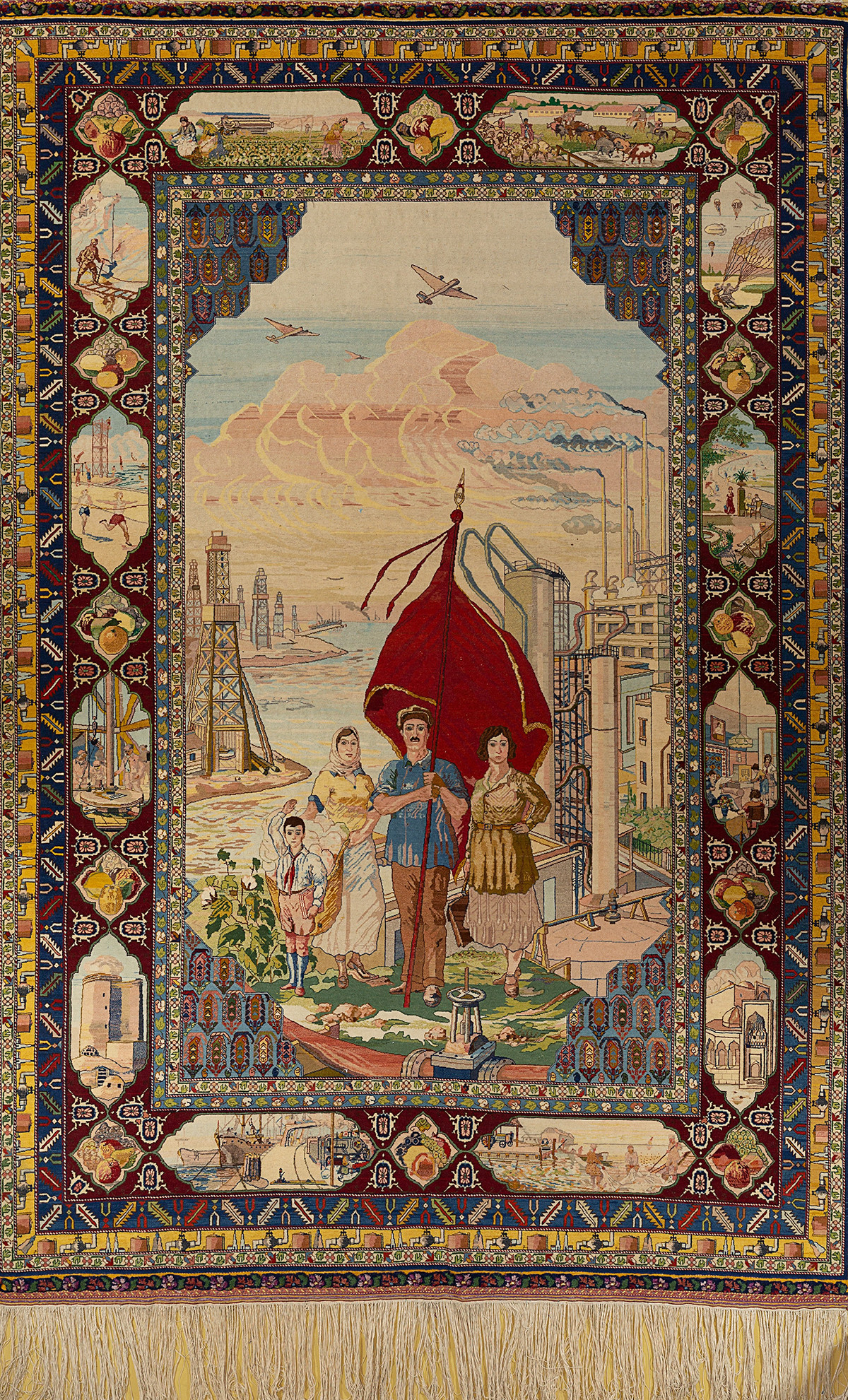 This huge 316 х 211 cm canvas reminds us of an Orthodox icon featuring the lives of the saints. Indeed, for the Soviet state the workers were true heroes and saints. So, in the central image we see an exemplary oilman with his family: his son is a pioneer, his daughter is a cotton picker and his wife is most likely an engineer. Oil industry landscapes are in the background, at a time when it was one of the most important and fastest growing industries in Soviet Azerbaijan.

In the frames of the carpet we see scenes of Azerbaijani life (just as in icons we would see the scenes of a saint’s life): Cotton picking, fishing, sports, and other plots of happy Soviet life. Below you can see a fragment featuring a family at home.

In 1928, Stalin launched the first five-year plans for developing the national economy. The main goal was to develop very quickly. In 1935, miner Alexei Stakhanov was told to extract 102 tons of coal in the course of just one work shift (the norm was 7 tons). From that moment, the Stakhanovite movement appeared and workers from different industries exceeded the norms many times over. Soviet propaganda praised these shock workers who helped develop the national economy and they were awarded medals for their labor. 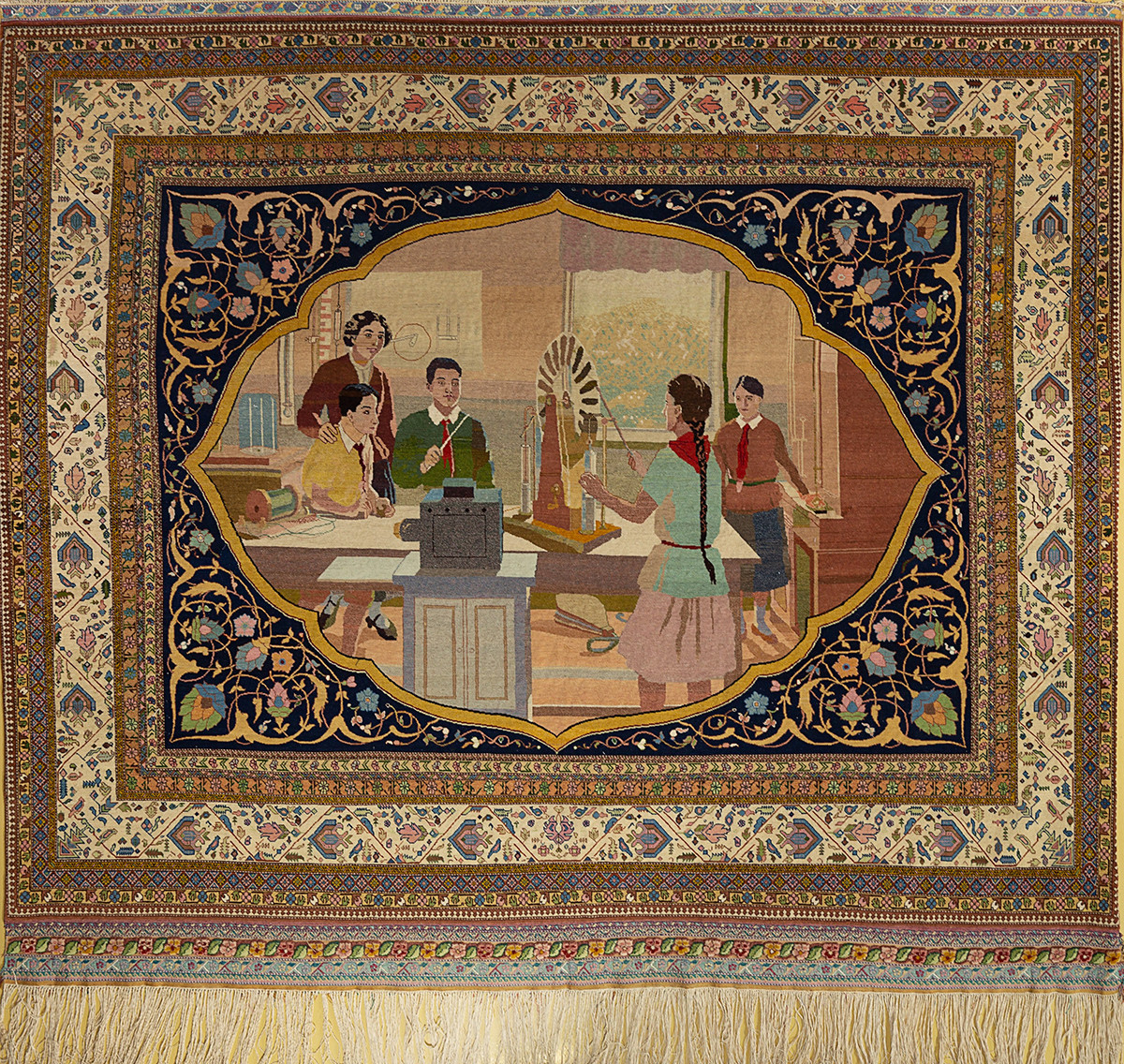 The Soviets intended to eradicate illiteracy and make people study. So, they produced many posters and slogans saying that education is enlightenment and the most important thing for people of any age. 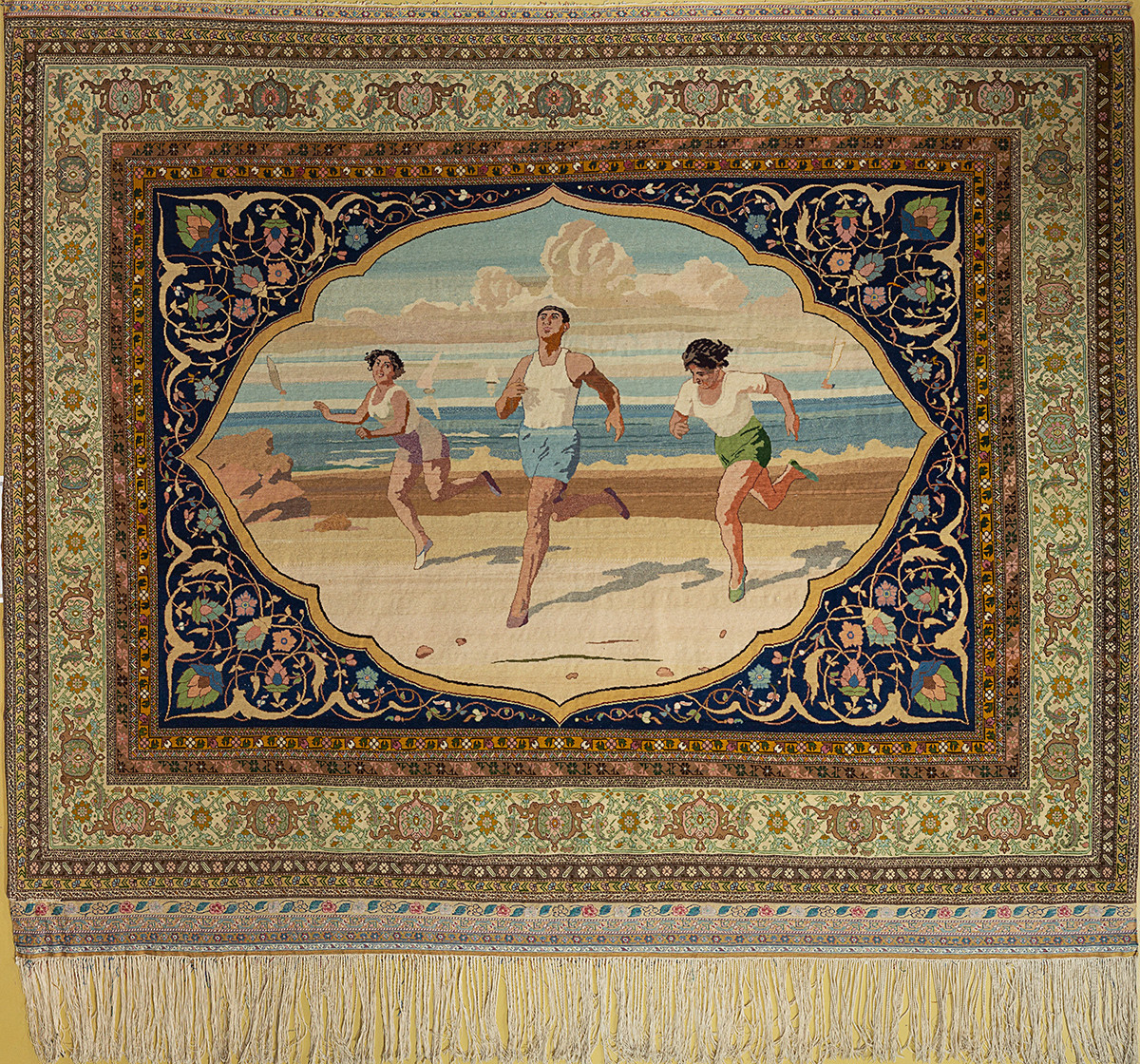 A Soviet citizen had to be not only well educated and a good worker, but also have a healthy body (which is necessary for a healthy spirit, according to Soviet propaganda). Thus, promoting sports and physical culture was among the primary goals of communist agitation.

The exhibition ‘Echo of Soviet Azerbaijan. Carpet. Embroidery. Poster’ is open until March 1 in the State Museum of Oriental Art in Moscow, in collaboration with Azerbaijani Carpet Museum in Baku.

Read more: Behind the mystery of wall carpets and watch pictures of how traditional carpets are still handmade in the Russian republic of Dagestan