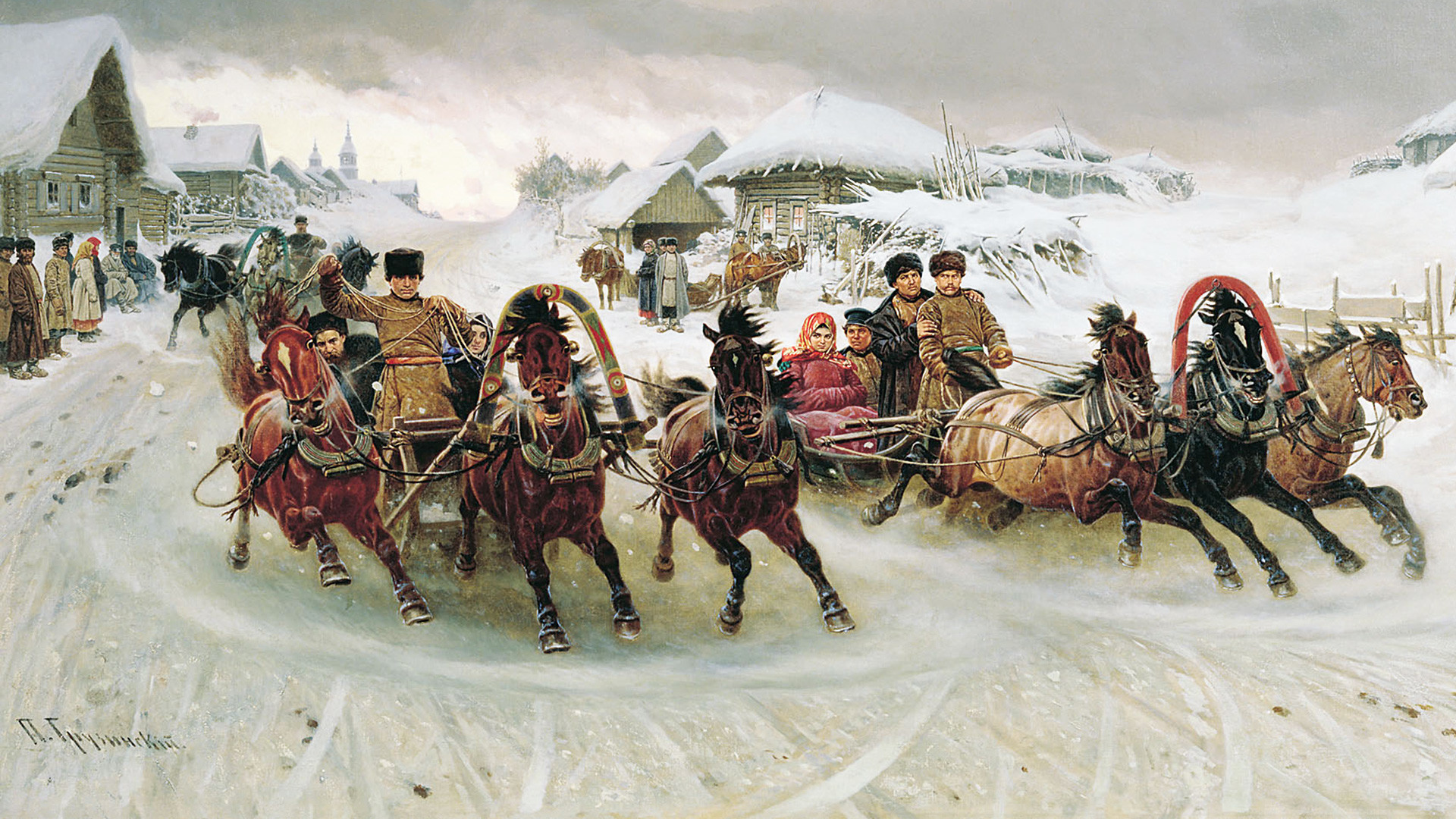 State Russian Museum
Russian art is chock-full of depictions of Maslenitsa being celebrated throughout our history. It is one of the most sacred Eastern Slavic religious holidays, during which Russians bid farewell to winter, just before the start of Great Lent.

Maslenitsa - or Shrovetide, is a folk feast that lasts for a week in February or March. People celebrate the end of winter and at the same time eat a ton of pancakes as the following Monday after Maslenitsa ends, Great Lent starts. During that time, practicing Orthodox Russians will give up many earthly pleasures for more than 40 days, which includes taking up a vegan diet, giving up smoking, various other habits, and especially negative thoughts..

Since ancient times, the Russian people have observed the ritual consisting of a week long extravaganza of pancakes  and drinking (ahem, gluttony!), as well as traditional folk games. Russian artists of the late 19th - early 20th century, who turned their attention to the ordinary people and peasants, had a special love for this favorite folk holiday, which is reflected in their works. 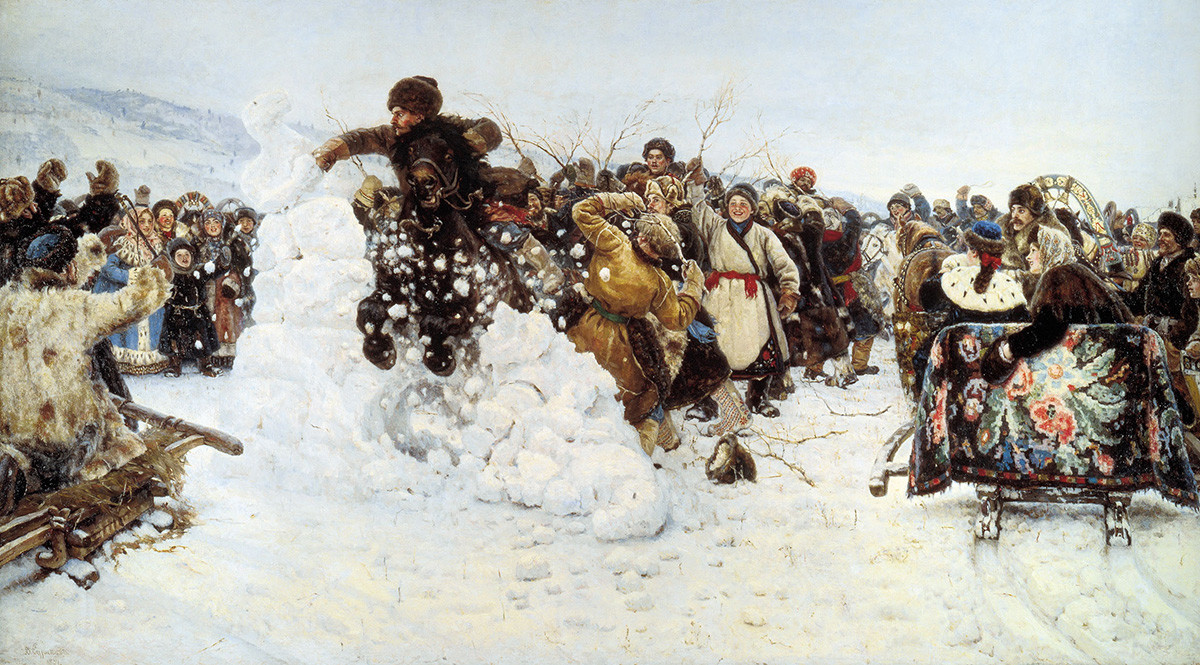 The great Russian artist Vasily Surikov’s ‘Capture of Snow Town’ depicts a Maslenitsa game that was popular among Siberian cossacks. The painting shows the culmination - when a member of one team finally breaks the snow wall. Surikov saw such games in villages near Krasnoyarsk, his native city (where he had also observed lots of ritualistic scenarios in the lives of the Old Believers. Those observations laid the groundwork for his famous later canvas, ‘Boyarina Morozova’). 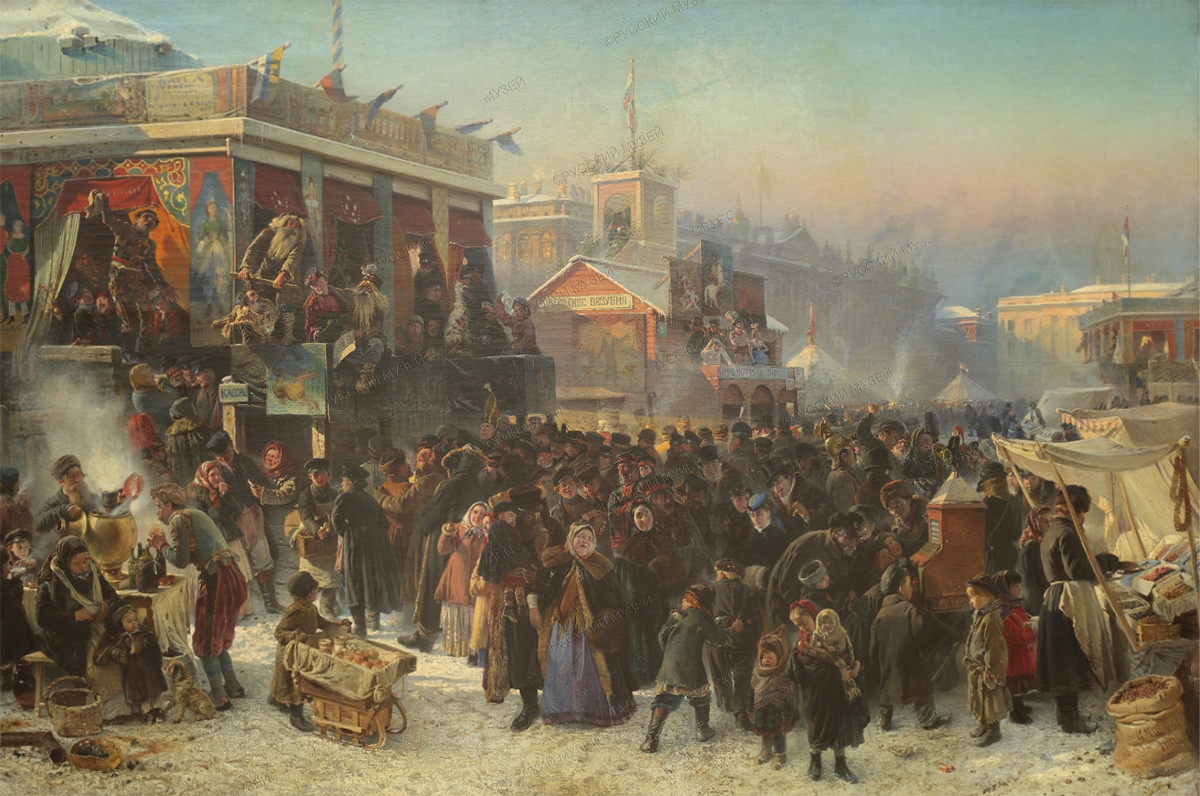 Urban citizens didn’t lag behind their countryside counterparts when going all-out during Maslenitsa. Temporary theater stages were constructed on central squares, big markets offered bread and circuses: boatloads of pancakes with a variety of toppings - from honey and jam to caviar, as well as performances, stunters, and even bears drinking vodka... 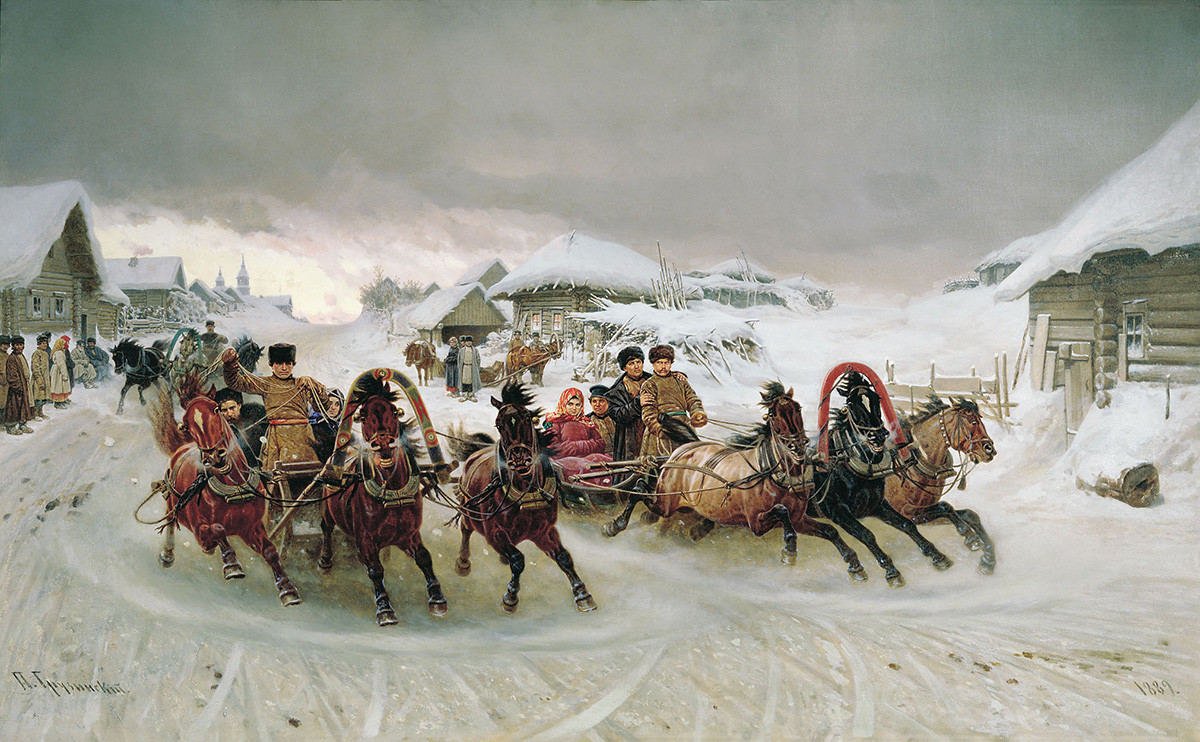 Holding troika races was one of the most favorite ways to have fun. People prepared horses in advance and suited up in their best clothes and bright colors. 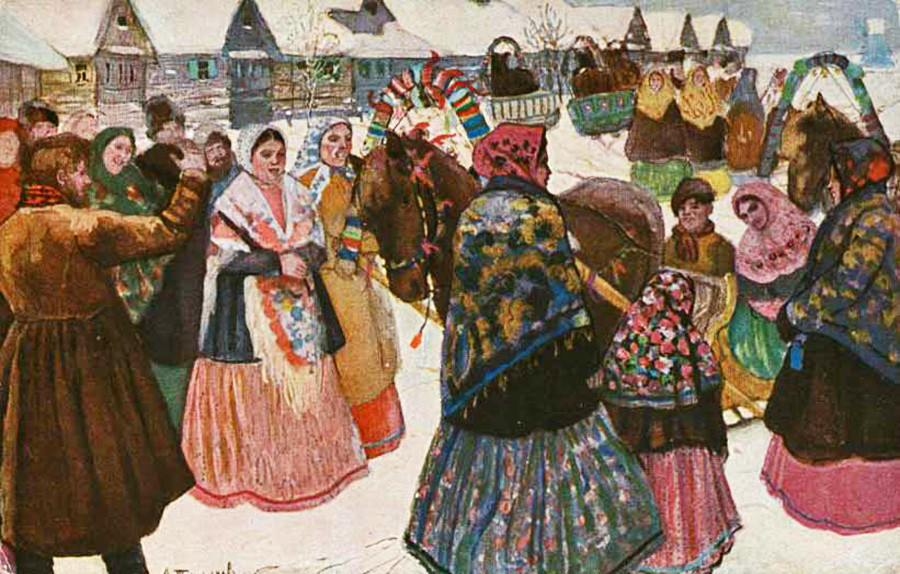 This painting shows one of the most important rituals of Maslenitsa week - matchmaking. Young people would go out together actively, forging a relationship, and plan a wedding for spring when Lent is over. 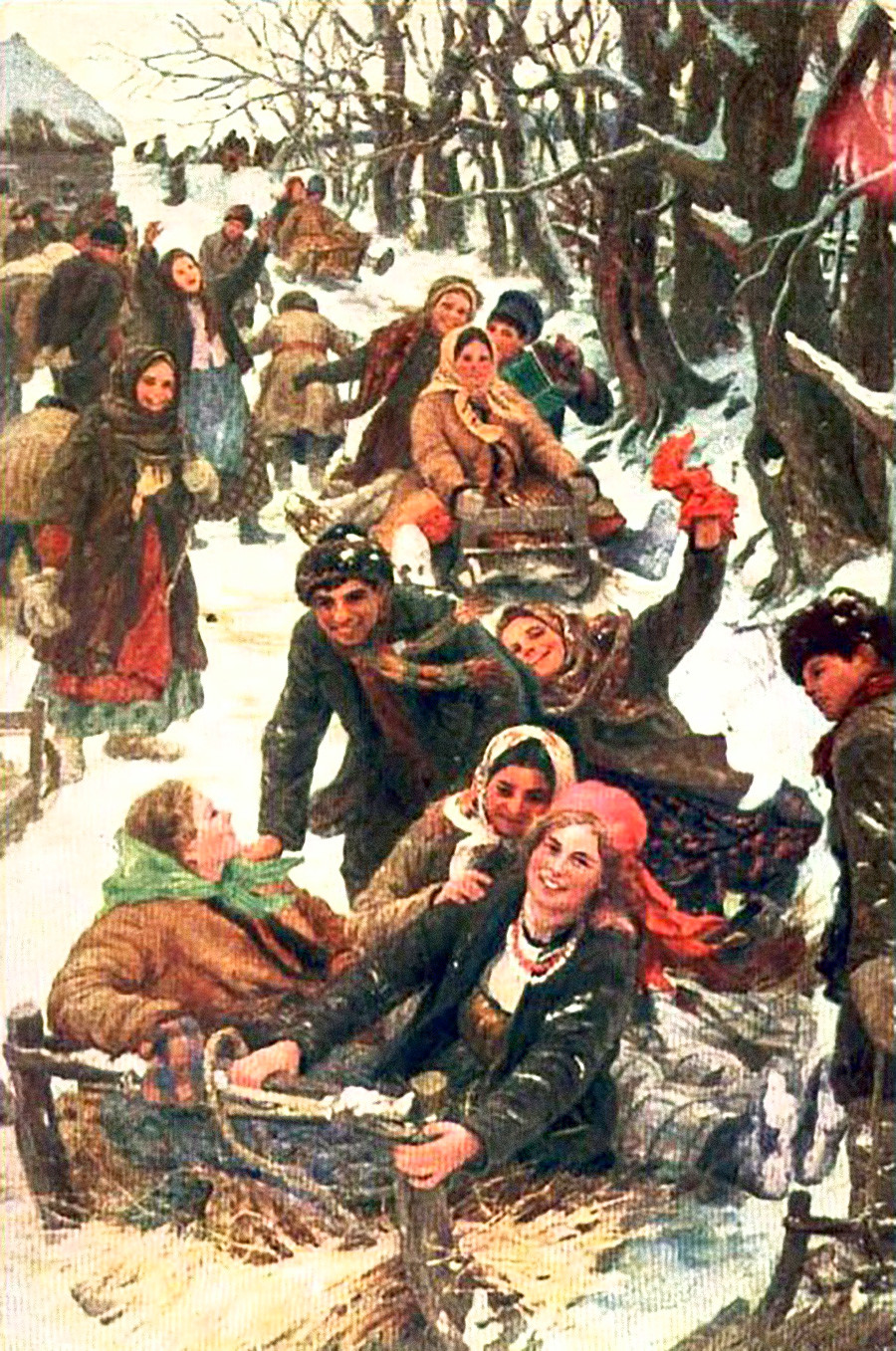 Born in a village, Sychkov was depicting the lives of peasants throughout his career, and especially their holiday fun: making snowmen, swinging, dancing, and of course sled-riding! 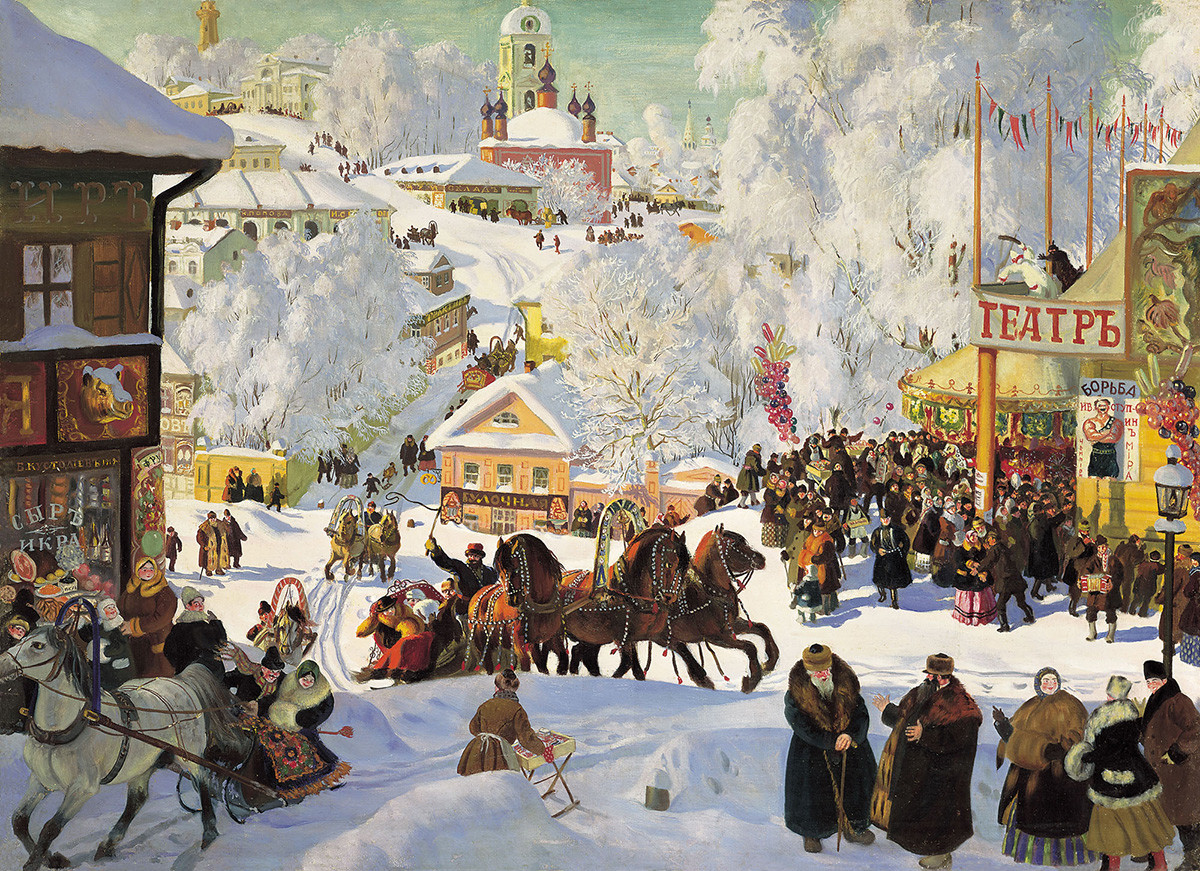 This artist painted several canvases devoted to Maslenitsa and winter festivities. Here is one of the most iconic ones, bursting with the kind of fun and joy that’s sure to infect its viewers, as we all reminisce of days gone by, when villagers or townsfolk everywhere used to gather en masse for one huge celebration - as some still do today! 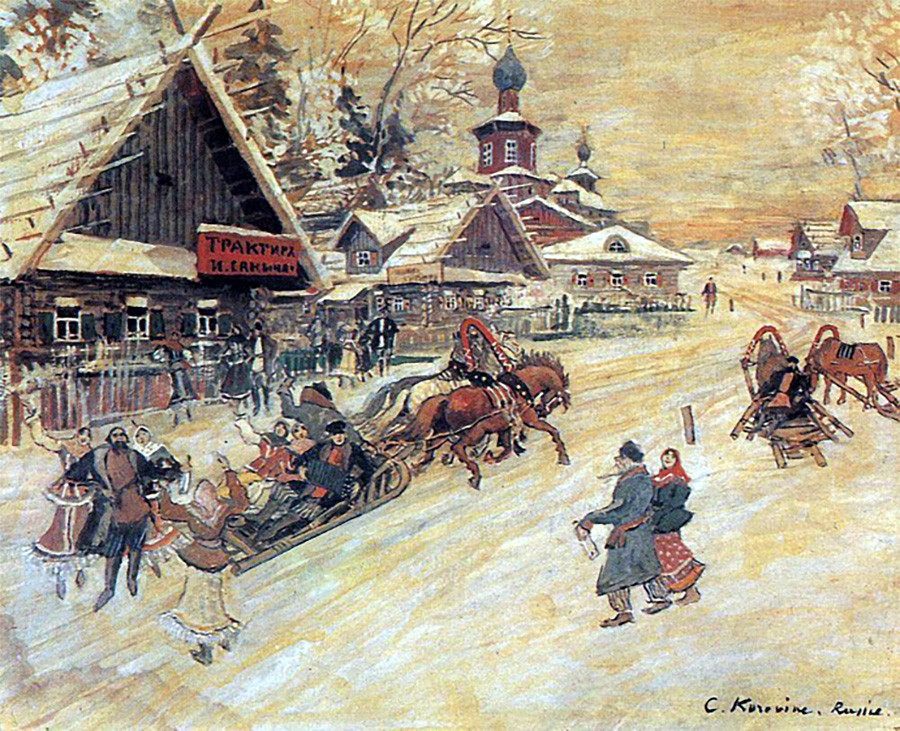 The best way to experience the spirit of Maslenitsa is definitely to visit Russia yourself, especially the small ancient towns like Suzdal (230 km from Moscow). Most traditions are still observed, and people are having fun and eating lots of pancakes throughout. But you could also watch Nikita Mikhalkov’s movie, The Barber of Siberia, which has a very authentic scene depicting Maslenitsa celebrations in old  Moscow. 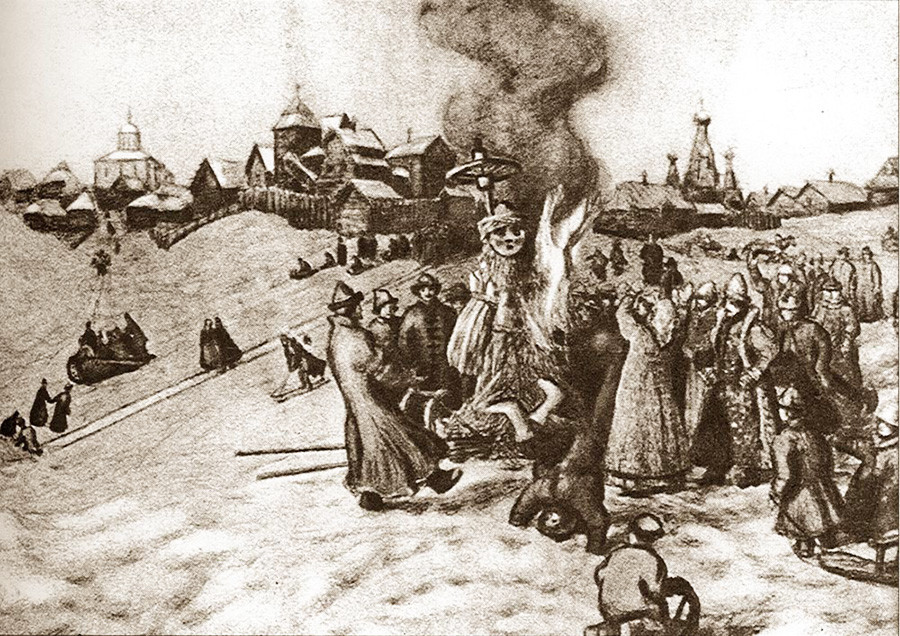 One of the most spectacular parts of the feast is burning the Maslenitsa doll. This straw creature symbolizes winter, and burning it down is meant to drive the cold and frost away. 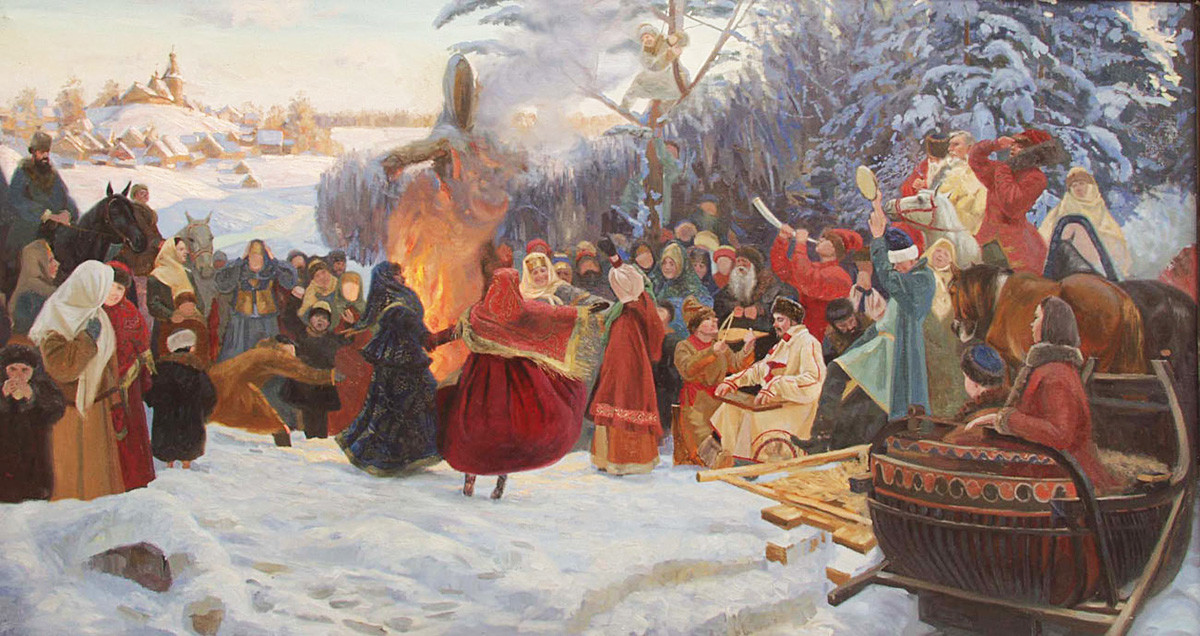 Usually a Maslenitsa doll is burnt on Saturday, marking the final stage of the celebrations. And that’s how contemporary artists reflect the ancient feast. 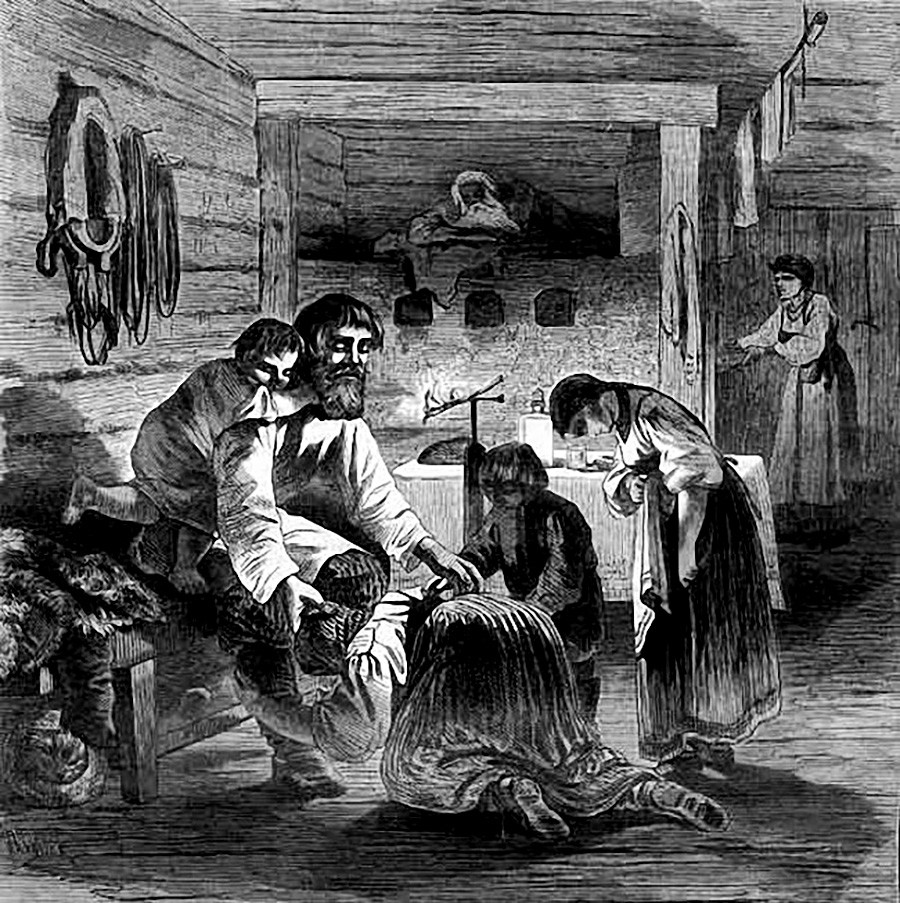 After all the pancakes have been eaten and Maslenitsa is burnt, it’s time to ask for forgiveness - ask anyone for anything. And the one you’re asking should traditionally answer with the phrase “God will forgive you”. This way people purify their conscience Lent and practice obedience and humble living, with thoughts of saving one’s soul in preparation for eternal life.