7 movies about foreigners’ adventures in the USSR 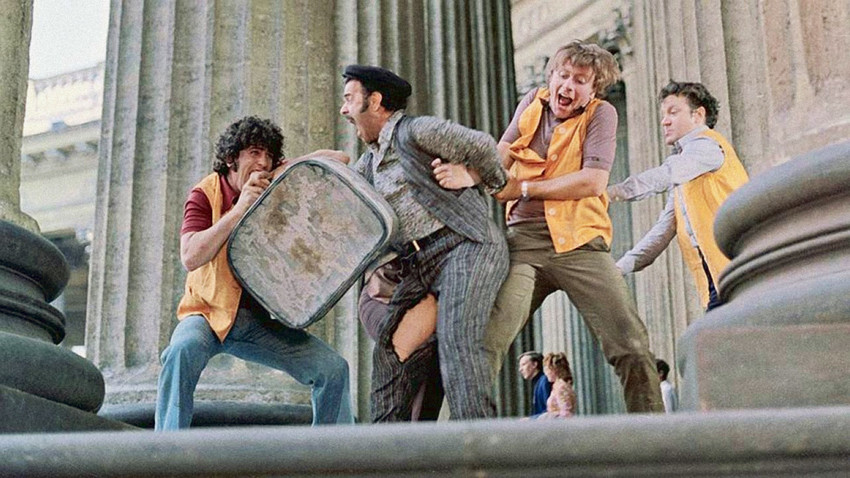 Eldar Ryazanov, Franco Prosperi/Mosfilm, 1974
What could a foreigner expect when visiting this closed-off and mysterious country? Watch these cult classics to find out.

1. Unbelievable Adventures of Italians in Russia (1974)

An old Russian immigrant dies in Rome, but shortly before passing, tells her granddaughter about a treasure she had hidden long before in pre-Revolution Leningrad. And the main clue - “it’s under the lion”. Unfortunately, several more people are listening in on the conversation, and so, they each embark on a race for grandma’s treasure! The KGB is also watching, to make matters worse. Watch the Italians tear it up in Russian ‘Zhiguli’ cars in this video!

The main protagonist - a nurse by day and a call girl by night - is ‘Intergirl’, a name she gets for only dealing in U.S. dollars. She dreams of meeting a foreigner, getting married and leaving the country. As luck would have it, one of her clients proposes - an engineer from Sweden, working in Leningrad. Now, marrying a foreigner in those days was like hitting the jackpot - a real catch. But is it really what she is looking for? This also happens to be the only movie depicting a foreigner’s life and work in the USSR.

The movie deals with the life of Africans in the USSR in 1936. An American circus goes on tour in the Soviet Union. Lyubov Orlova plays the Russian protagonist whose son is dark-skinned, resulting in constant blackmail at the hands of the racist circus management. This leads to them having to find a new home in the USSR. Incidentally, actor James Patterson’s father was, indeed, an American, who arrived in the USSR during the Great Depression. His mother, meanwhile, is Russian. After the breakup of the country, he returned to the United States.

A plane full of international passengers headed for Beijing is forced to perform an emergency landing somewhere over Lake Baikal. Well, what is one to do in this situation, but to be engulfed in the life of the Siberian locals they encounter. The foreigners learn Russian traditions of hospitality and pick up Soviet ways along their journey. The movie does come across as rather dated these days, but we don’t mind, if it means getting a glimpse of Orlova’s iconic smile one more time.

The story takes place in the 1930. A French pianist marries a Soviet diplomat and moves to the USSR. But their life does not pan out: all that awaits them there are repressions and years of internment at labor camps. The film is based on a true story.

It’s 1927. The protagonist, a Japanese entrepreneur, is taking a trip aboard the Trans-Siberian to Moscow. But Western intelligence has other plans for his trade talks, and sends an assassin aboard the same train to eliminate our Japanese comrade, before he reaches his destination. The Russians, of course, are no slouches either, so the KGB gets involved, as well.

The action takes place in the post-WWII years. In the late 1940s, the country receives an influx of repatriates, among them are doctor Aleksey Golovin and his French wife and child. Upon arrival, we learn that their dreams and expectations of their newfound home are not at all reality. Except, now, they can’t return to France.