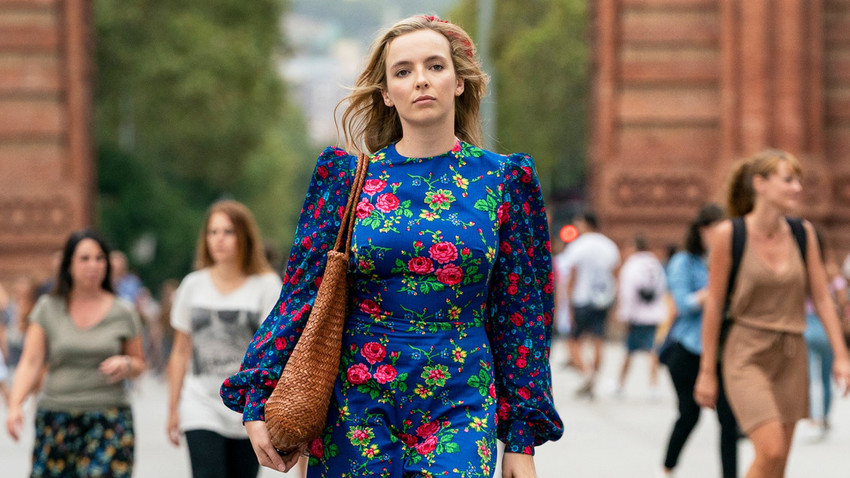 BBC America, 2020
It all felt a bit strange even in season one. But by the middle of season three, the creators seemed more concerned about the female assassin's outfits than pesky things like authenticity and lifelike characters.

In season three of Killing Eve, Russian killer Oksana Astankova (aka Villanelle) locates her family somewhere in Mother Russia. In the eyes and ears of Russian viewers, the stereotypes and clichés (and plain weirdness) were on steroids. Here are just a handful of them.

Empty 'Moscow' with only one square

Villanelle is not the only Russian baddy in the series. So too is her former boss and FSB agent Konstantin. Incidentally, real Russians rarely call each other by their full first names. If they are friends, she would call him Kostya. If their relationship was purely professional, he would be Konstantin Something-ovich (his patronymic is never mentioned). 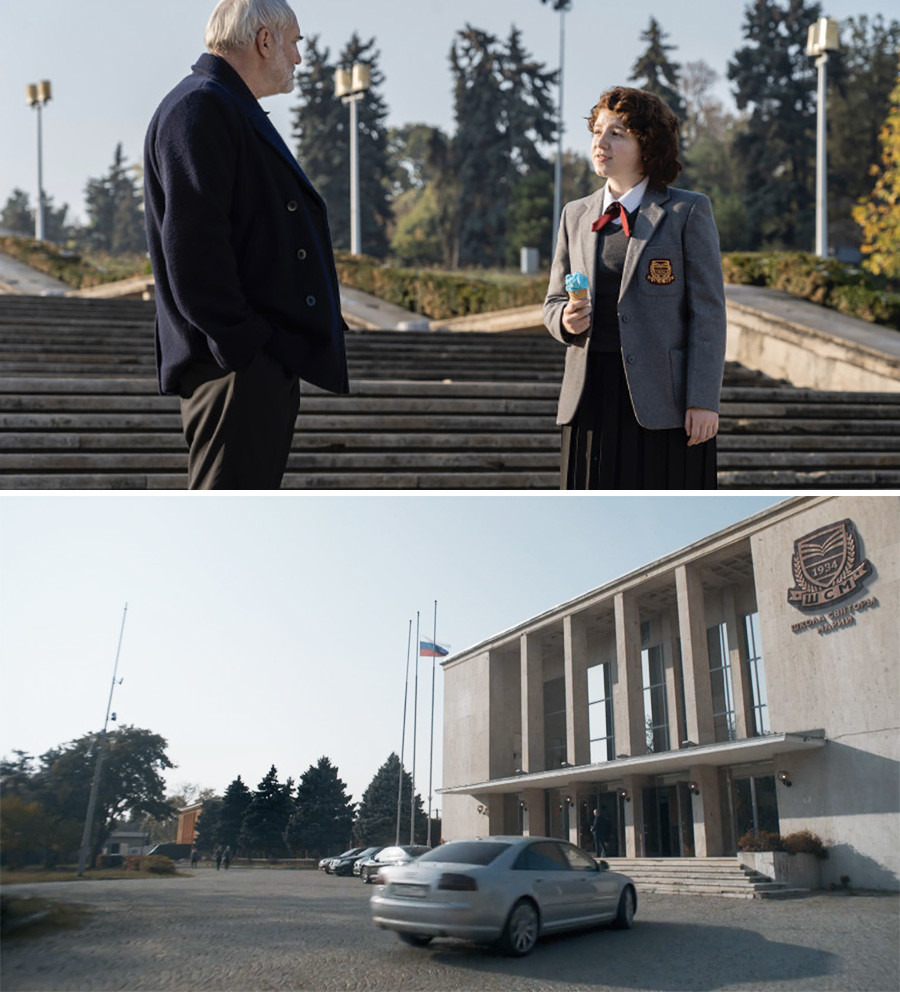 Before sending Villanelle to her homeland, Konstantin himself pays a short trip to Moscow to see his daughter Irina. In this scene, the Russian capital is a mix of low-rise buildings typical of provincial cities, chaotic traffic, a sinister concrete school with a sign in the Latin alphabet, and an equally sinister square with soldiers running up and down a huge flight of steps. But despite the stately pomp of its Stalinist architecture, there’s no such locale to be found in Moscow. As it happens, the Russian scenes in Killing Eve were shot in Romania, which the creators do not hide.

Vodka for all occasions 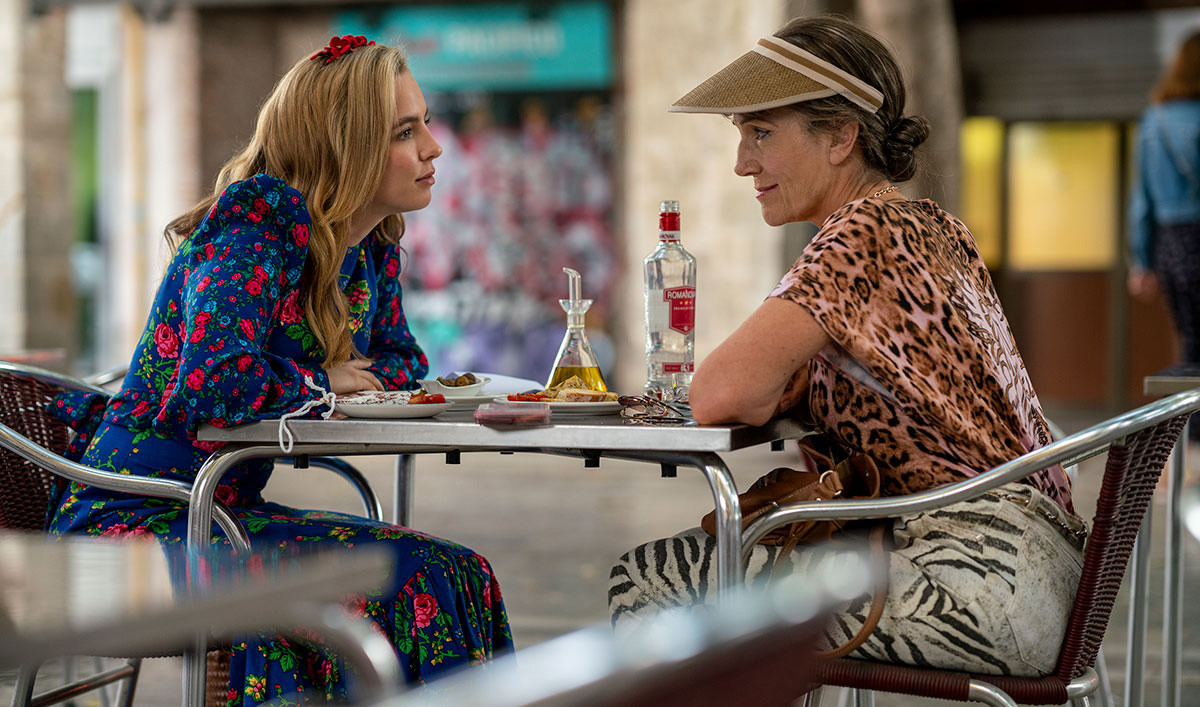 Russia’s national drink appears throughout the series with clockwork frequency. The hard-boiled Konstantin downs a double shot at every opportunity. Likewise Villanelle’s new handler in season three, the former Olympic gymnast and agent Dasha, is rarely seen without a bottle. Judging by the café scene in Barcelona, she either brings her own or orders half a liter for lunch. Sure, people drink vodka in Russia, as they do in many other countries, but it’s not a standard beverage for lunch or dinner. 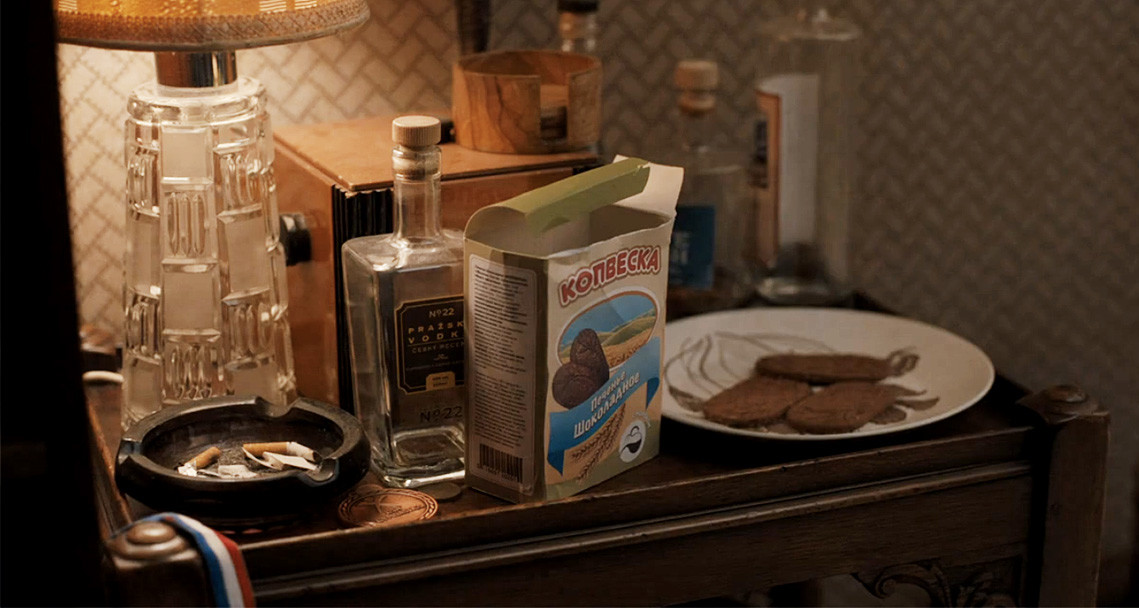 If vodka is relatable (albeit not in such quantities), the nostalgia for the mysterious "Kopveska" cookies is decidedly odd. That is the fictitious name (complete gibberish in Russian) that appears on a packet of cookies that Dasha brings to Spain from Russia. And Villanelle (more precisely Oksana) gets offered the same by her mother back in her homeland.

It’s probably a reference to the plain oatmeal cookies sold on every street corner in Russia, and which were never in short supply even in the leanest of times. Even if they had been, they would hardly rouse tender feelings of nostalgia in someone of Villanelle’s generation, for whom the USSR is a historical blur. 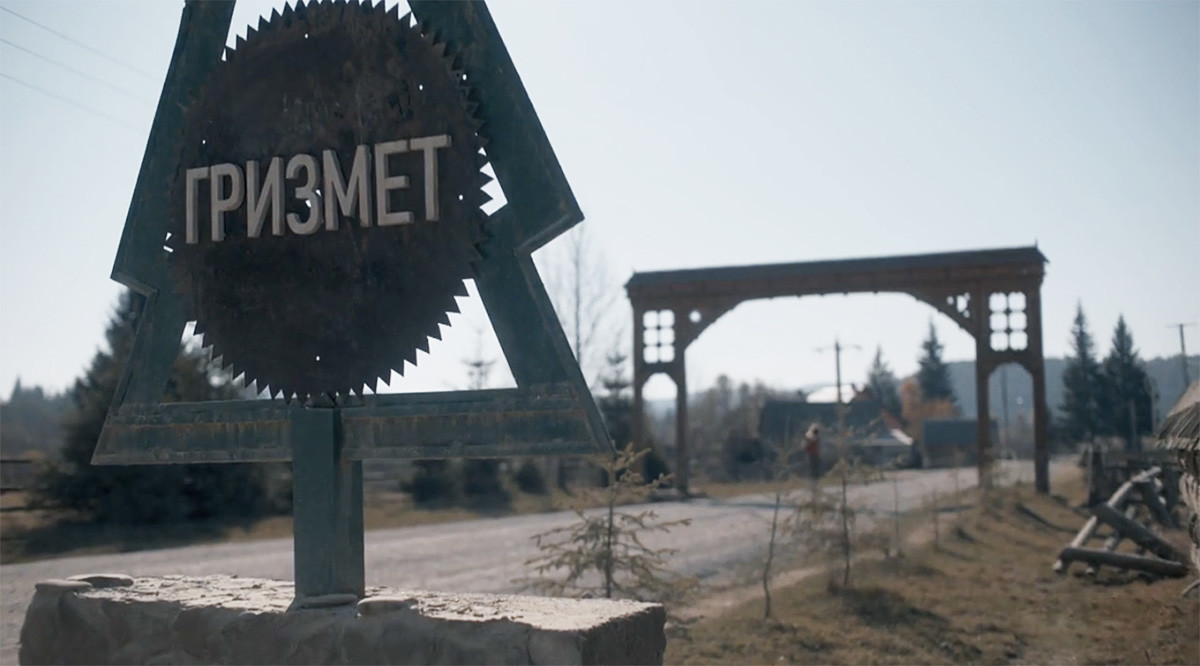 The village where Villanelle’s mother lives with her new family is called Grizmet. No such settlement exists, of course, and the combination of letters looks ridiculous in Russian, more like an abbreviation. It’s not only Villanelle who is shocked by her relatives and mother’s new husband, but Russian viewers too. 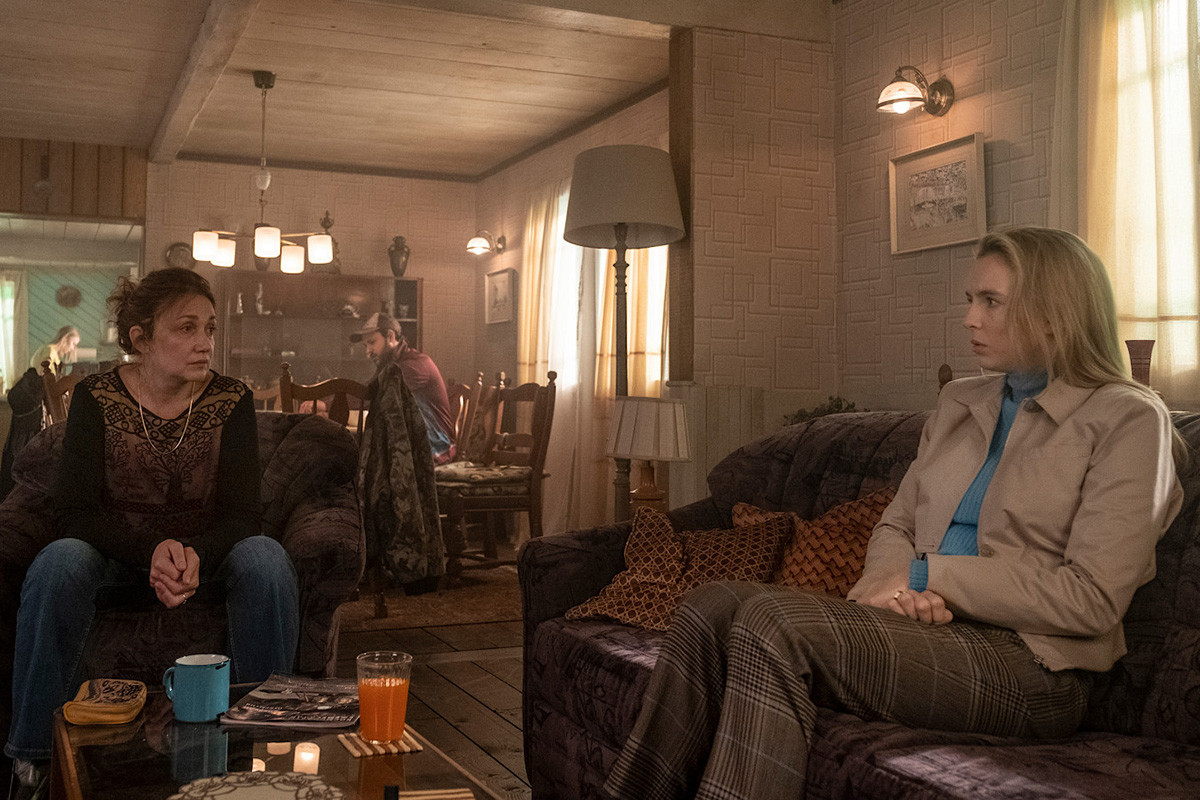 The only one to own a mobile phone with Internet access is Villanelle’s teenage step-brother. He doesn’t use it, however, since his every waking moment is devoted to... Elton John (who doesn’t normally count Russian schoolchildren among his obsessive fans). The adults behave like clowns and are dressed in clothes that went out of fashion 30 years ago — not surprising, then, that the psychopath killer Villanelle wants to murder them. Who wouldn’t? 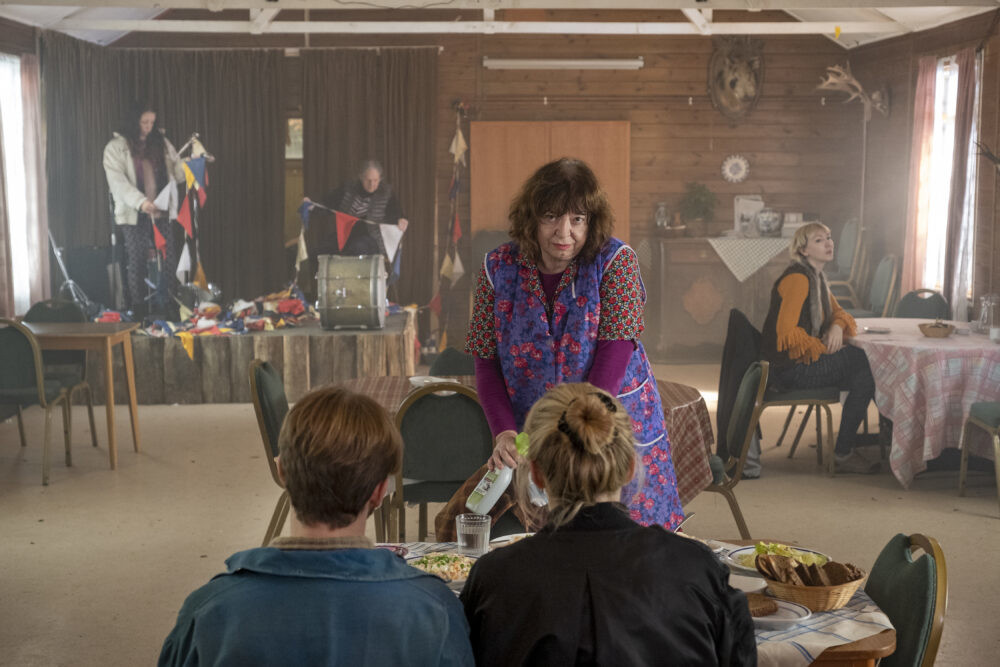 But the main surprise is that everyone in the village, all the way up to lady serving food in the local diner, speaks near-fluent English with only a slight accent. 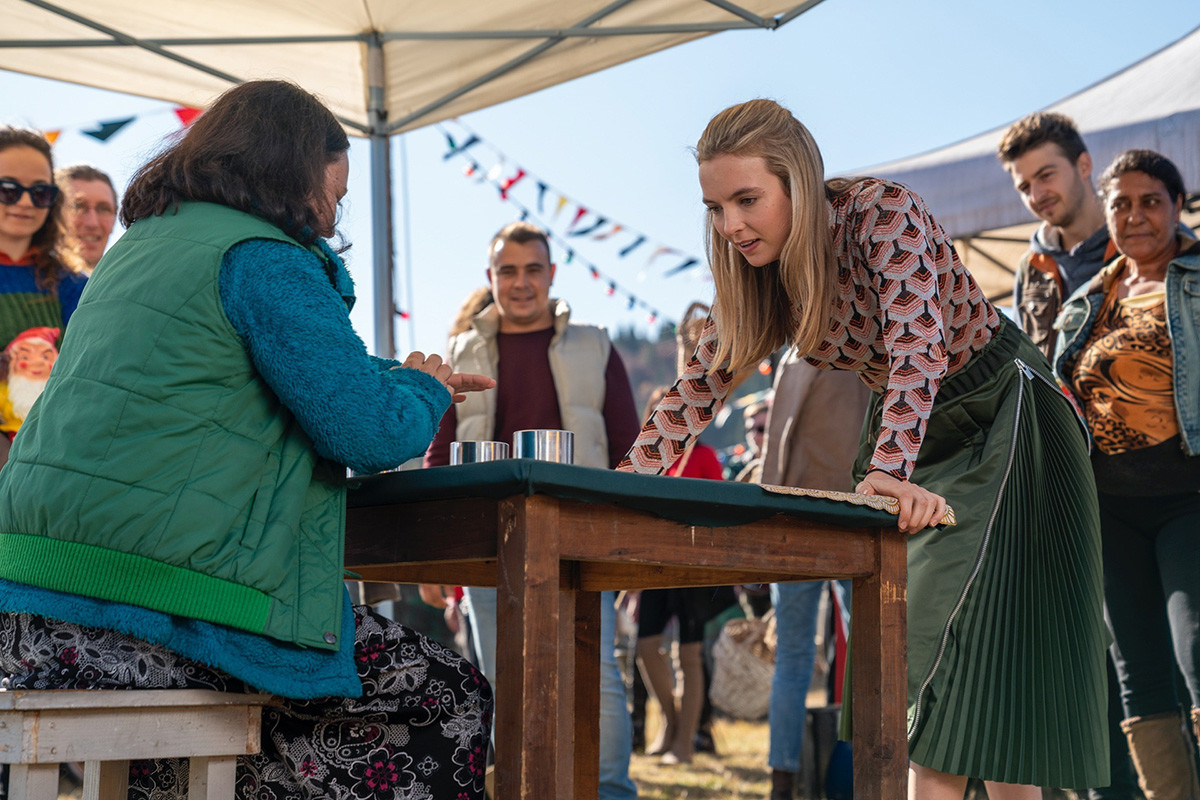 For Villanelle, the annual harvest festival full of folk pastimes represents the apotheosis of rural life, despite such events having disappeared with the USSR and collective farms. The bizarre dung-throwing competition, in which the heroine takes first place and receives a medal to the tune of the Russian national anthem, seems more like a surreal borrowing from some madcap spaghetti western. 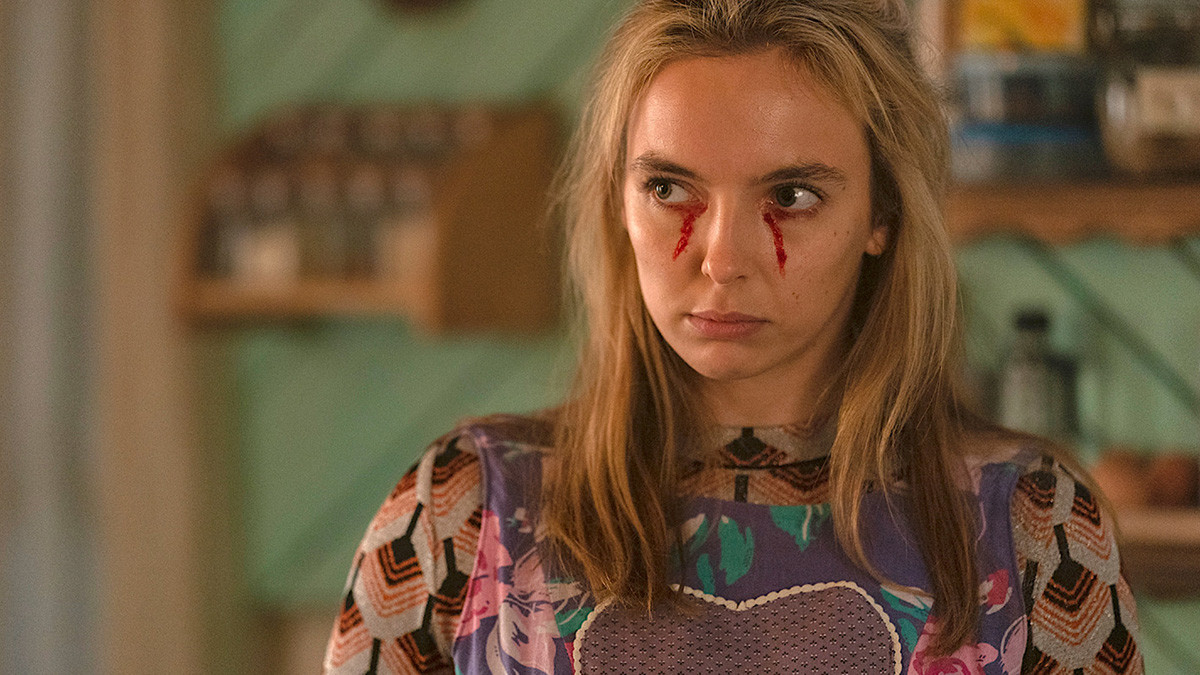 However, judging by the online feedback, Russian viewers are more amused by the endless stream of absurdities than irritated. As for the tomato-paste blood from Villanelle’s eyes, even fellow psychopath Joker wouldn’t be caught dead wearing such a look.