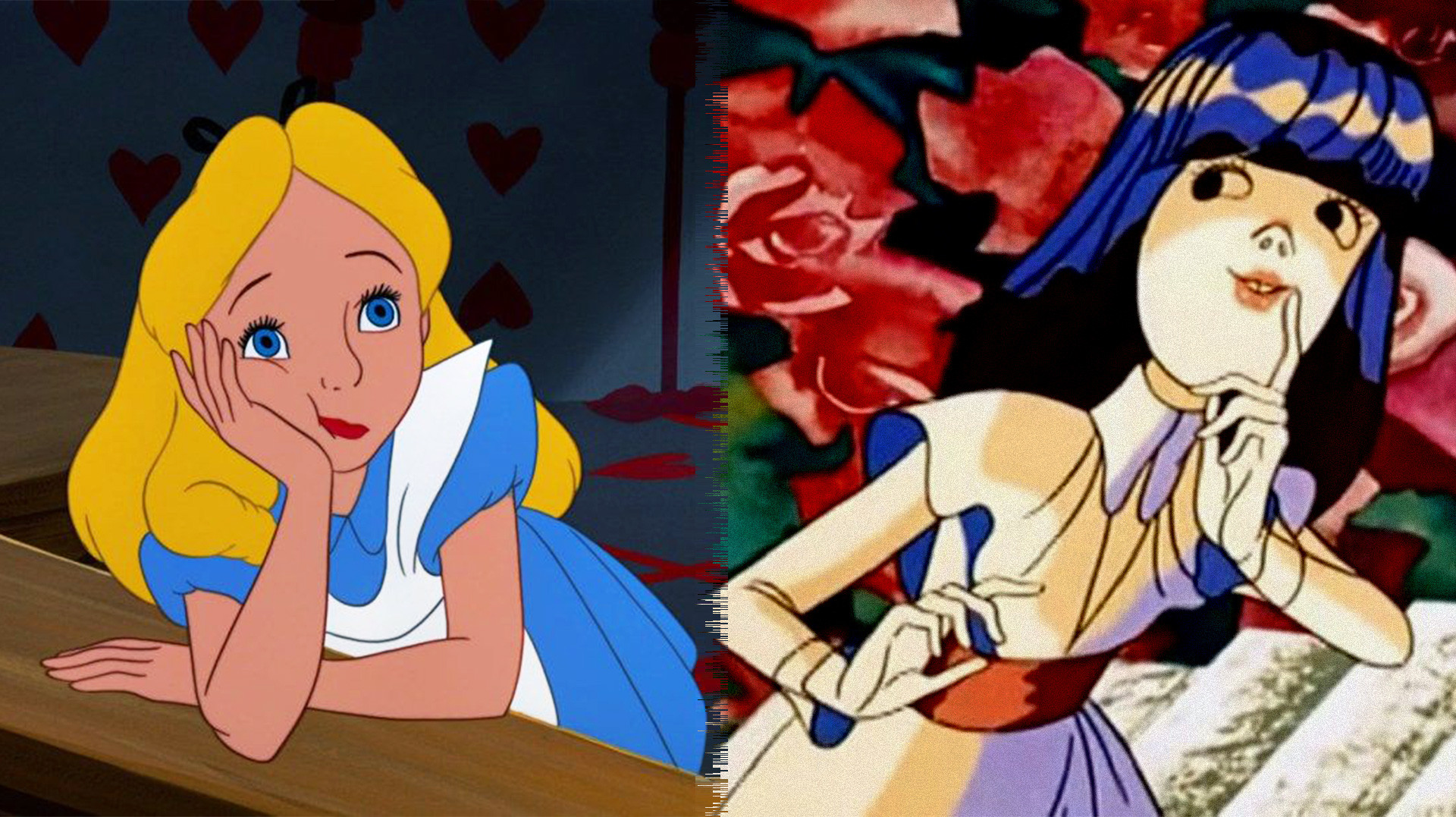 Clyde Geronimi, Wilfred Jackson, Hamilton Luske/Walt Disney Productions, 1951; Efrem Pruzhanskiy/Kievnauchfilm,1981
Disney is famous worldwide for its cartoons based on books and folk tales. But did you know that Soviet film studios worked with the same stories - and sometimes even earlier than their American colleagues?

Editing the Russian translation of Italian tale The Adventures of Pinocchio Russian writer Alexey Tolstoy made many major changes to adapt it for little Russian readers as much as possible. And eventually he decided to make his own version of the tale - and published it in 1936. The 1976 movie adaptation of it is considered a cult film in the USSR.

Buratino, the Russian version of Pinocchio, has several important differences from his Italian brother. First of all, his nose doesn’t grow when he lies (and actually as a good Soviet boy he doesn’t lie). Buratino is also a very positive guy, always seeing the world in an optimistic way - and he doesn’t suffer as much as Pinocchio. The Soviet book and movie also have additional characters and plot lines - such as Tortilla the Turtle who preserves a Golden Key which brings happiness.

2. Winnie the Pooh vs. Vinnie Pukh

A.A Milne’s tale also had a rather free retelling from the Soviet children’s writer Boris Zakhoder. But Winnie the Pooh became even more famous in the USSR after three Soyuzmultfilm animation movies of 1969, 1971 and 1972 directed by Fyodor Khitruk.

The Soviet Winnie actually doesn’t have a Christopher Robin… nor does he have friends such as Kanga or Tigger. The movies cover only a few of Milne's and Disney's plots. The Soviet Winnie also gets into a tight place after eating too much honey. Eeyore also loses a tail - and actually the duo of Winnie and Piglet find it and return it as a birthday gift. And of course The Soviet Winnie also does his best to get honey from a tall tree.

3. The Snow Queen vs. Frozen 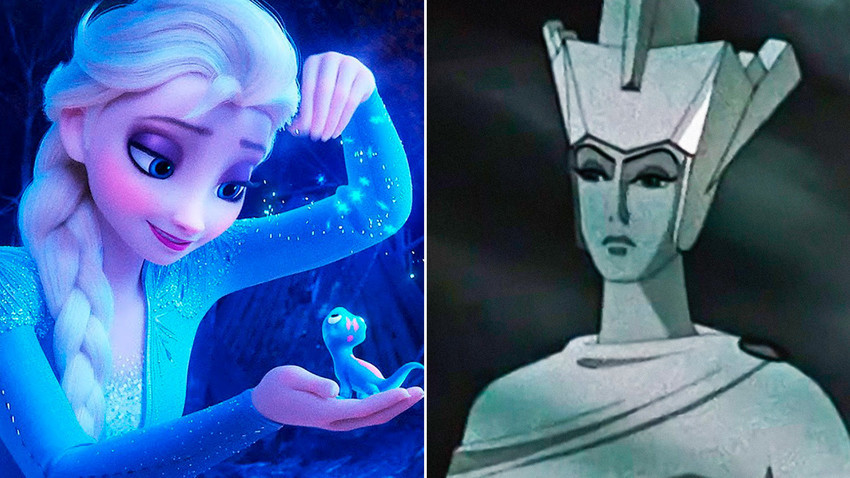 One of the most recent animated movies that took the world by storm - Frozen - has a great 1957 Soviet predecessor. Both are inspired by a tale of Hans Christian Andersen. The dramatic difference is that in the Soviet movie Gerda heroically travels alone looking for her brother Kai, bewitched by the heartless Snow Queen. Another difference is that Disney’s Elsa is actually a sister of Snow Queen and also has a magic power which she hides throughout her whole life. Soviet girl Gerda is only driven by love and courage against the much more powerful (and adult) creature.

Officially this Soviet cartoon has nothing to do with Tom & Jerry, but the similarities are obvious. The American version has Tom, the cat and Jerry, the mouse. The Soviet opponents are the Wolf and the Hare. They are not mute and they are much more humanised, wearing clothes, using transport, and they are not shut up in one house. The Wolf is actually a badass - smoking, drinking beer and wearing a leather jacket. And the Hare just like Jerry is very smart and mocks his aggressor in very harsh ways.

Lewis Carroll’s Alice in Wonderland was interpreted by Disney in 1951 and in 1981 by the Soviet Kievnauchfilm studio. The Soviet version has no King of Hearts and lacks the episode with Alice's tears. But if Disney's animation took only the scene with Tweedledum and Tweedledee from Alice’s sequel Through the Looking-Glass, and What Alice Found There, the Soviets separated it and made a series from each of the books.

The plot of a young beautiful lady being poisoned is very popular in the folklore of many countries. And if Disney’s story is based on the 1812 tale by the Brothers Grimm, Souyuzmultfilm interpreted Alexander Pushkin's 1833 tale.

Snow White and the Russian Princess both suffer from envious stepmothers jealous of their beauty and expelling them from their houses. One of the main differences is obvious from the title - instead of finding shelter in the Dwarfs’ hut, the Russian Princess meets Knights. Both girls are poisoned by the enchanted apple. The happy end is similar - the Prince finds his beloved lady, kisses and rescues her and they marry.

7. Beauty and the Beast vs. The Scarlet Flower

Beauty and the Beast is a popular European folklore plot that was interpreted for a Russian fairy tale The Scarlet Flower by the 19th century writer Sergei Aksakov. What is different about The Scarlet Flower? There is also a father who is working hard but as a merchant who undertakes ocean voyages to faraway lands. And while Disney’s Belle is an only daughter, Russian Nastya has two elder sisters. Preparing for another trip, the father asks all three of them what they would like him to bring back. Two daughters ask for expensive gifts, but Nastya only wants a scarlet flower.

Stricken by a storm the father finds himself on an unknown island where a terrible beast meets him and orders the man to bring one of his daughters or remain alone forever. The father comes back and tells the sad story to a friend. Nastya accidentally overhears the story and decides to save her father. She goes to the island and falls in love with the beast. But the sisters go mad from envy and try to ruin this relationship.

8. The Jungle Book vs. Adventures of Mowgli

Both cartoons are based on Rudyard Kipling’s famous The Jungle Book about a feral boy raised in the Indian jungle by animals. While Disney’s 1967 story is more uplifting and positive with singing bears and joyful wild world, the Soviet 1973 animation is about surviving in the jungle under the law of the jungle. It’s full of drama, courage and metaphors to real-life human problems. A strong piece!

9. The Little Mermaid vs. Rusalochka

The bright and colorful Disney 1989 movie does not have much in common with the dark Soviet drama filmed in 1968. And we even doubt that kids should really watch the second one, however, it’s much closer to the original Hans Christian Andersen’s tale.

In the Soviet version you won’t see cheerful Sebastian the crab or Flounder the fish. And you won't see Ariel in a seashell bra doing her hair with a fork. But the main plot is similar - the Soviet mermaid saves a beautiful prince and makes a deal with a sea witch - she gets legs but with the danger of losing her voice if the prince won’t kiss her - or in Soviet version if he marries someone else. But if Disney goes for a happy end, the Soviet movie doesn’t spare the mermaid - who dies in the end.

The 1947 Soviet musical fairy tale is a version by Soviet playwright Evgeny Schwartz based on Charles Perrault’s tale. The little girl suffers from her stepmother and sisters’ whims, and has to do all the housework.

Compared to the 1950 Disney version, the Soviet one is closer to the original. Cinderella's father is alive but is just too soft and kind a man to protest his new wife's actions. However, in the end he supports Cinderella, who shows that the glass shoe belongs to her.