Why is Soviet art so aesthetically pleasing? 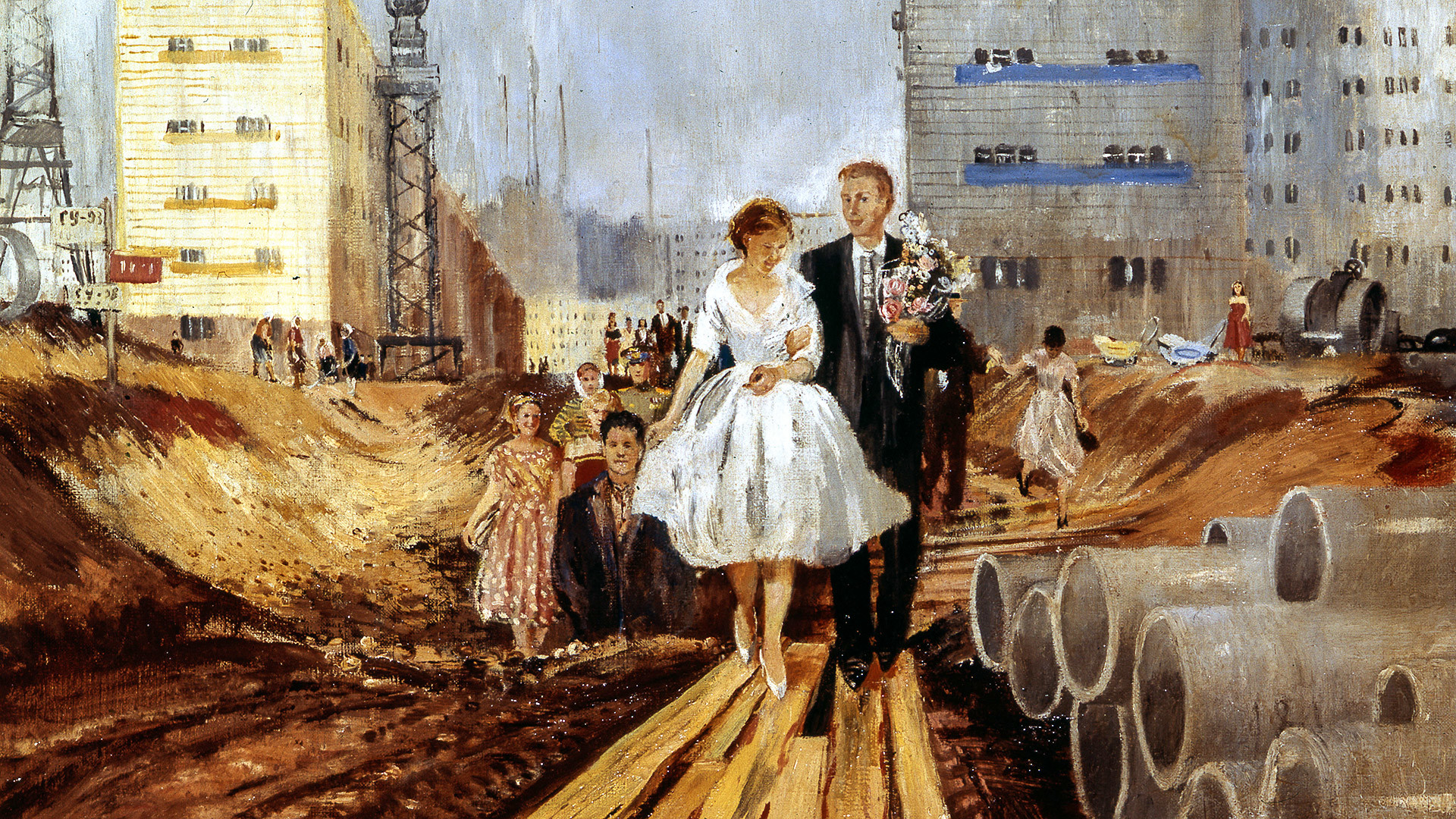 Sputnik
Since the collapse of the USSR almost 30 years ago, attitudes toward Socialist Realism - the predominant artistic style of the Soviet period - has kept changing among art historians. But for the majority of ordinary art lovers it remains attractive to this day.

"Art belongs to the people," Vladimir Lenin said in conversation with Clara Zetkin in 1920, and the Communists turned his words into a slogan. The phrase was widely replicated and could be found in almost every local house of culture. The original phrase had a continuation: "It [art] ought to extend its very deep roots to the very thick of the broad toiling masses. It ought to be intelligible to these masses and loved by them…  Should we treat a small minority to fancy sweet biscuits, while the masses of workers and peasants are in need of black bread? Obviously, I mean this not just in the literal sense, but also figuratively: We should always have the workers and peasants in mind."

Everything for the people

Thus, the leader of the world proletariat set the course that Soviet art was to follow for the next 70 years. Its main feature was accessibility for anyone and not just the educated elite, refined artistic bohemians or habitual museum goers, but literally for any peasant who arrived from a village and happened to wander into a museum. 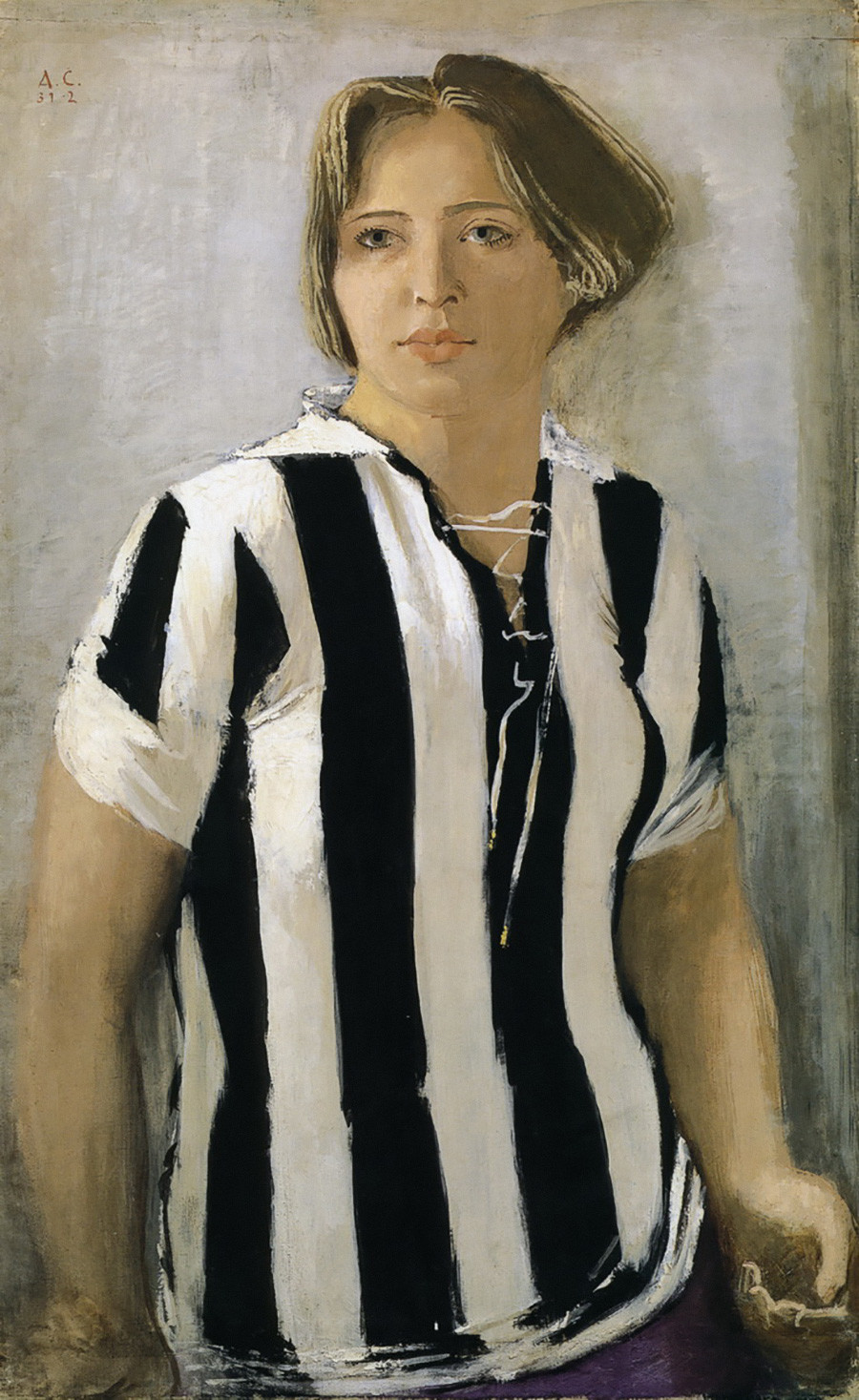 It is not surprising then that realism was proclaimed as the main artistic style - with such an approach, metaphors and multiple layers of meaning were superfluous (and during the period of political repression, simply dangerous).

Painting and sculpture had new heroes, in whom viewers were supposed to see and recognize themselves - builders, steelworkers, students, athletes, soldiers. As regards the best artists of the time - for instance, Alexander Samokhvalov or Alexander Deineka - the figures they portrayed not only acted as a mirror but were also imbued with a universalizing power.

Paintings in every house

Another consequence of the slogan that art belonged to the people was the idea that art should become accessible to people regardless of how well-off they were. Paintings were widely replicated in illustrated fine art books, which in the Soviet Union were published en masse, and in literature and history textbooks, as well as postcards, tear-off calendars and reproductions in popular magazines. 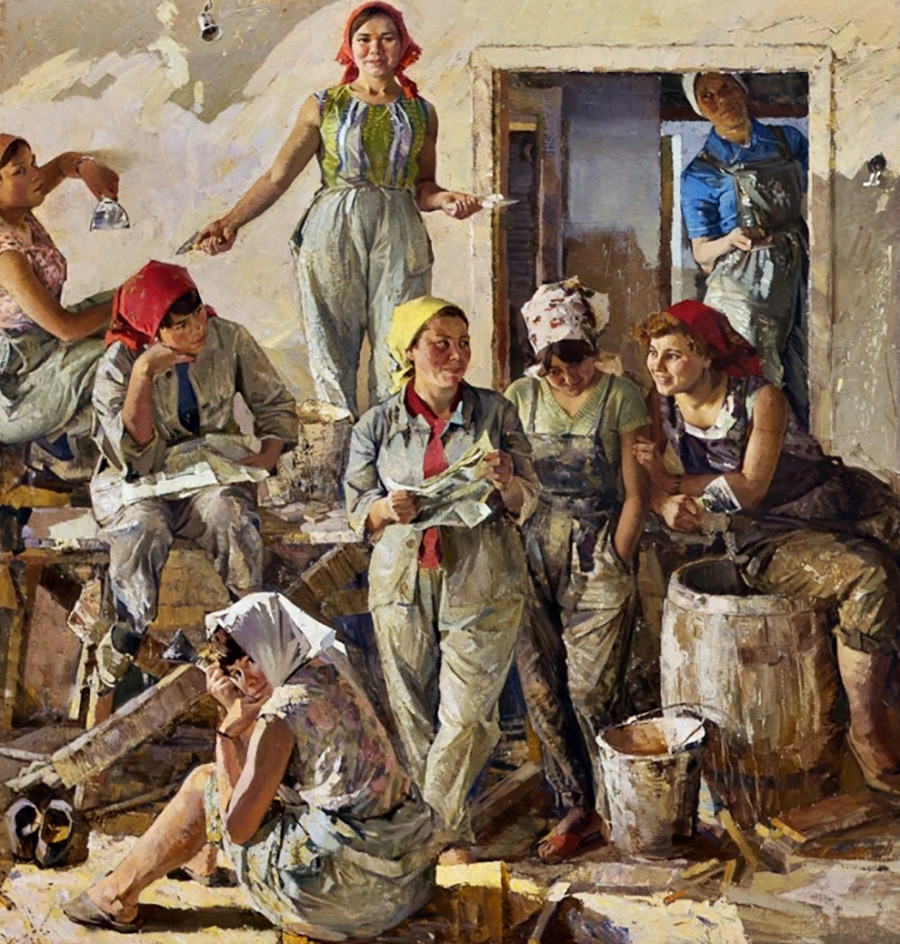 A postcard by Nikolai Karacharskov. "Russia, They Write About Us," 1969

People across the vast Soviet Union collected them and put reproductions torn from books and magazines on their walls, creating their own unsophisticated collections. The images still remembered by today's generations evoke nostalgia not so much for Soviet painting itself as for the bygone years of childhood.

Forward to a bright future 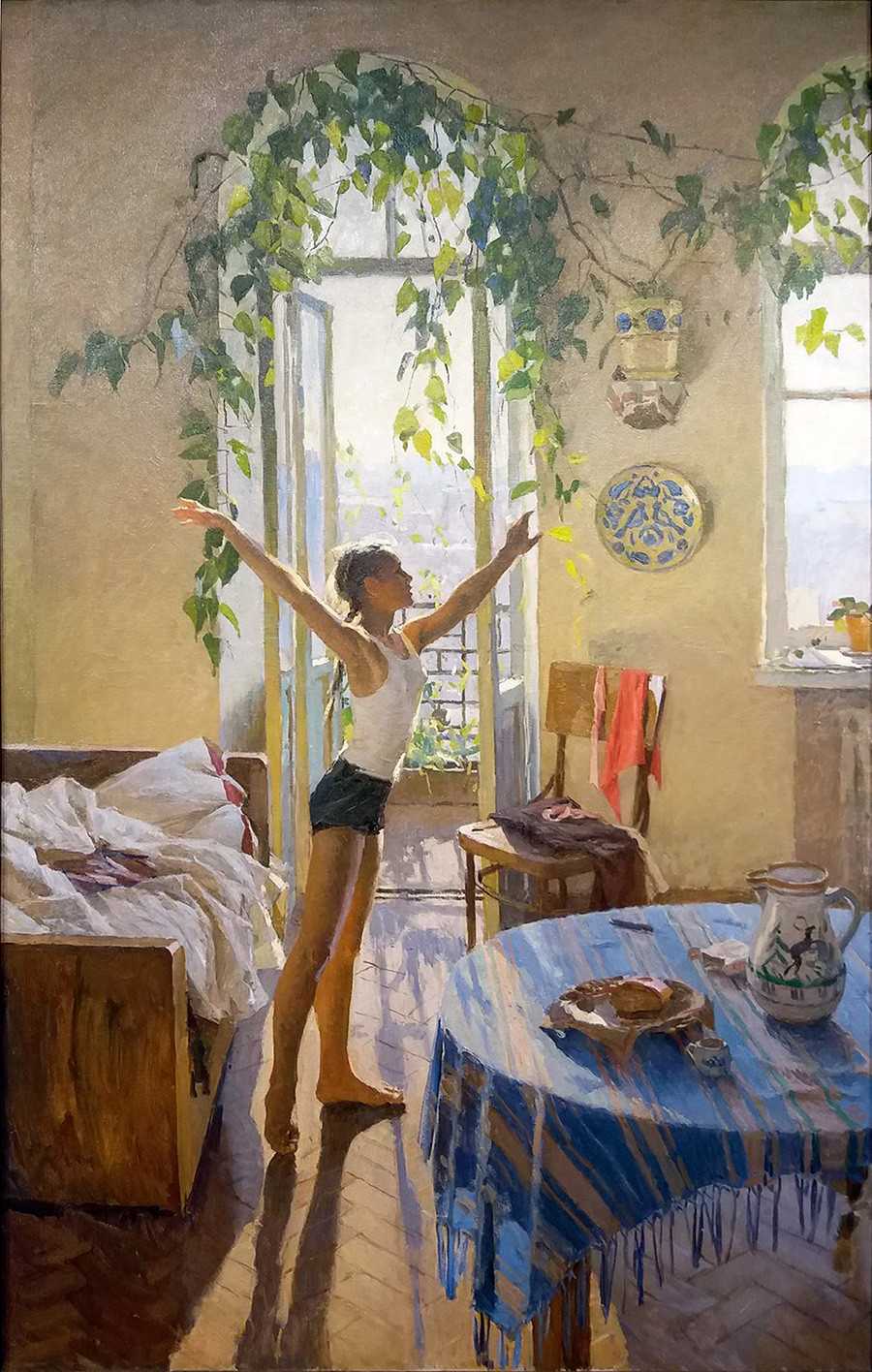 Another idea laid down by Lenin was the use of art as a form of political activism and promotion of communist ideology. Building communism was a lengthy and complicated affair, and personal comforts were constantly sacrificed for the sake of a bright collective future, but art showed an example of how to cope with difficulties. 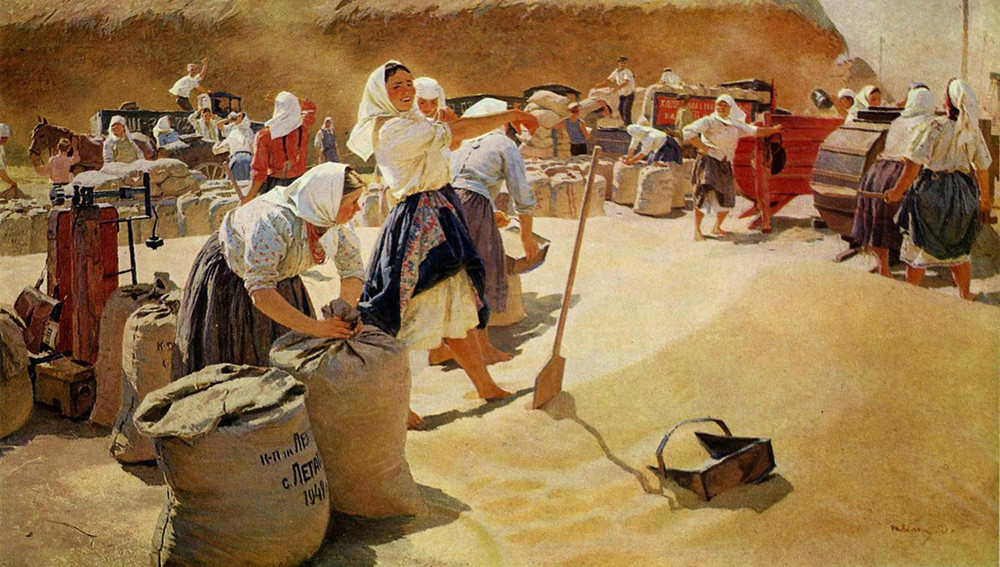 All of Soviet painting was extremely optimistic and its protagonists had idealized human appearances. There was no place for tiredness, depression or doubt - instead, there was only the bright sun, the joy of work and sport, and the pride that comes from achieving something. In the paintings of artist Tatiana Yablonskaya, the daughter who is doing her morning exercises ("Morning") is just as happy as the female collective farmers during the harvest ("Grain") or the flirting couple next to a wheelbarrow of bricks at a construction site ("At the Building Site"). 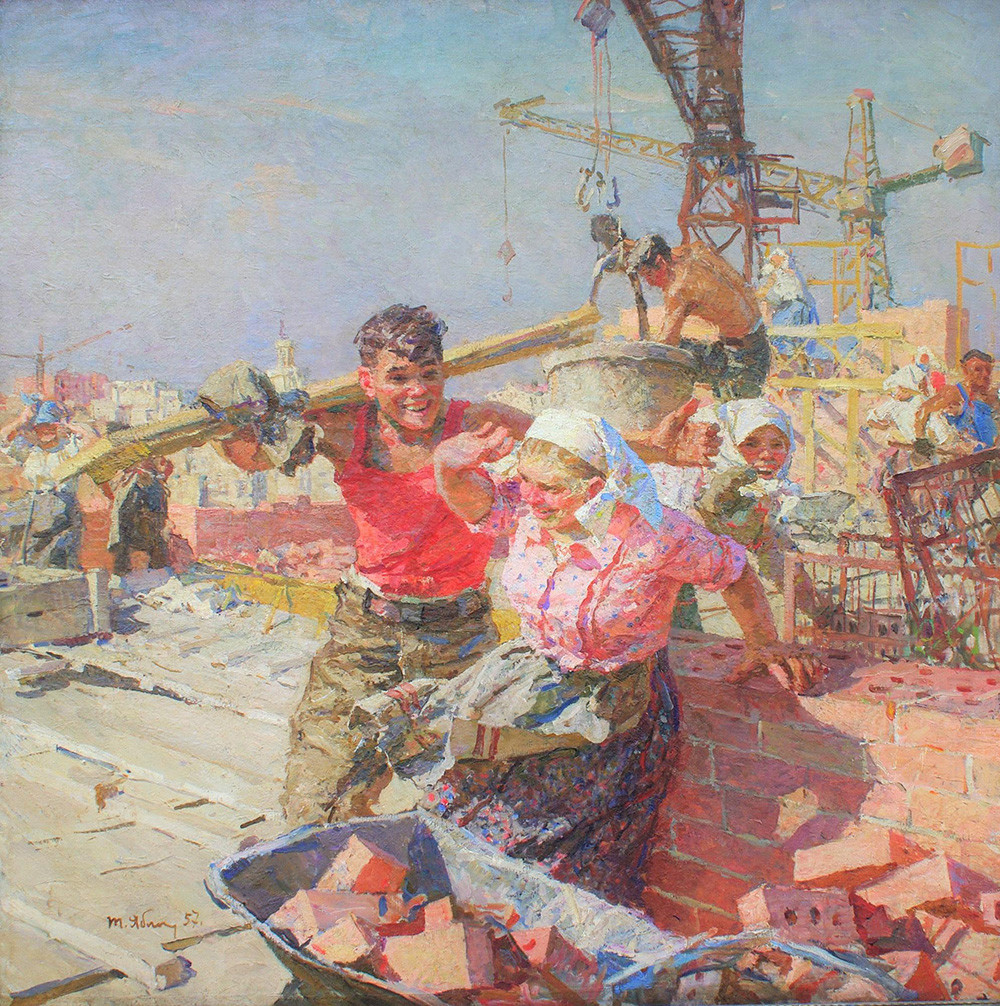 Tatyana Yablonskaya. On the construction works, 1957

And in Alexander Deineka's painting, "Brigade on Vacation", a group of muscular lads throw off their work clothes and gleefully jump into the water. Only construction cranes in the background and the title of the painting hint that these superhumans had just finished a difficult shift at a building site. 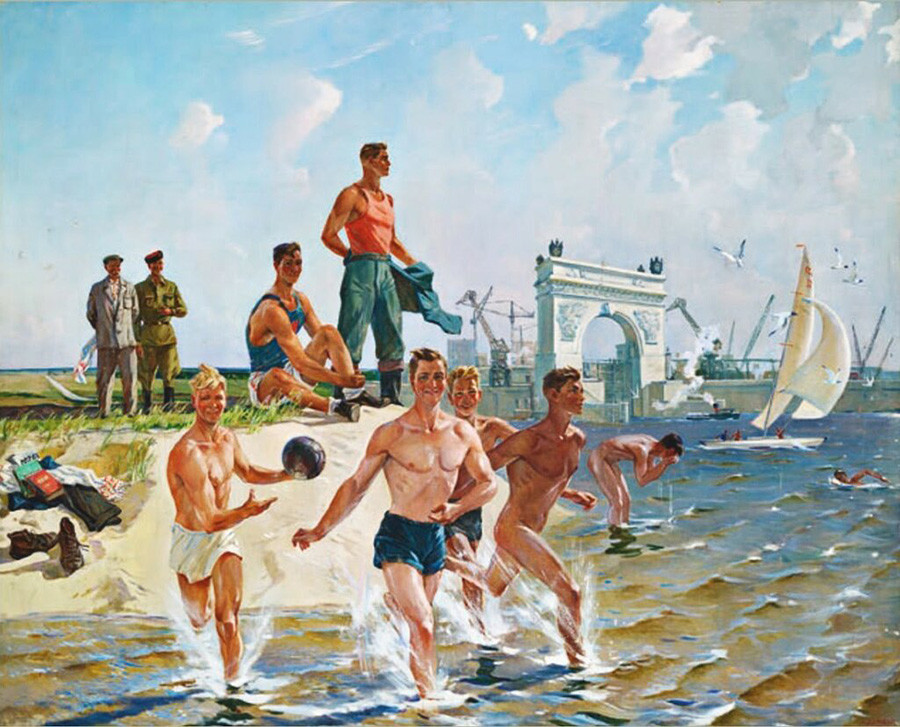 Heirs to the Modernists

Despite the Soviet leader’s desire to build a completely new world, it was impossible to dispense with tradition in art, and the majority of Soviet artists of the first generation had undergone excellent Imperial era training and propounded the same principles themselves. Moreover, the main Soviet teaching establishments were formed from the old art schools. The famous Vkhutemas [Higher Art and Technical Studios], which was set up in 1918, was a direct successor of the Moscow School of Painting, Sculpture and Architecture.

After Vkhutemas was closed down in 1930, three new institutions were created from it: The Moscow Architectural Institute (Markhi); the Moscow Surikov State Art Institute; and the Moscow Polygraphic Institute. All three went on to turn out a large number of the artistic stars of the Soviet and post-Soviet period. 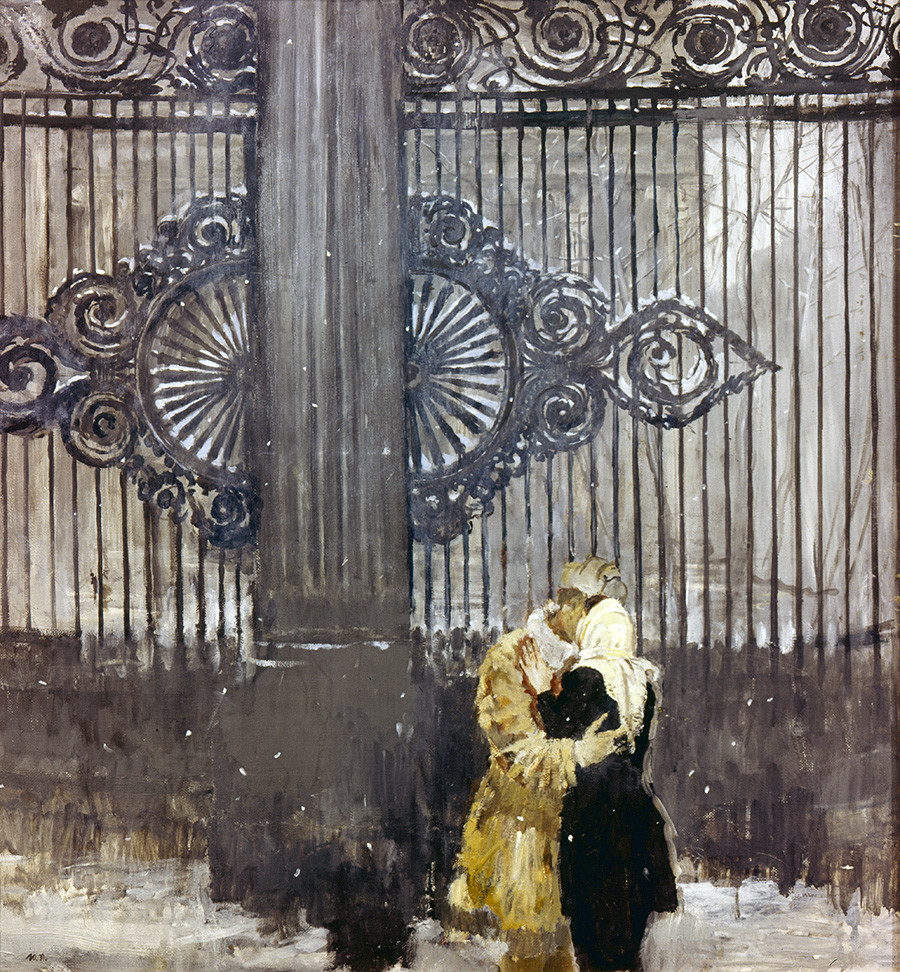 The hallmarks of Modernism and Impressionism can be detected in the paintings of many Soviet masters. Alexander Gerasimov was one of the main darlings of the Soviet authorities and painted the cringe-worthy canvas, "I.V. Stalin and K.E. Voroshilov in the Kremlin," which is popularly referred to as "Two Leaders After Rain." Before the 1917 Revolution he was a pupil of Konstantin Korovin and Valentin Serov. 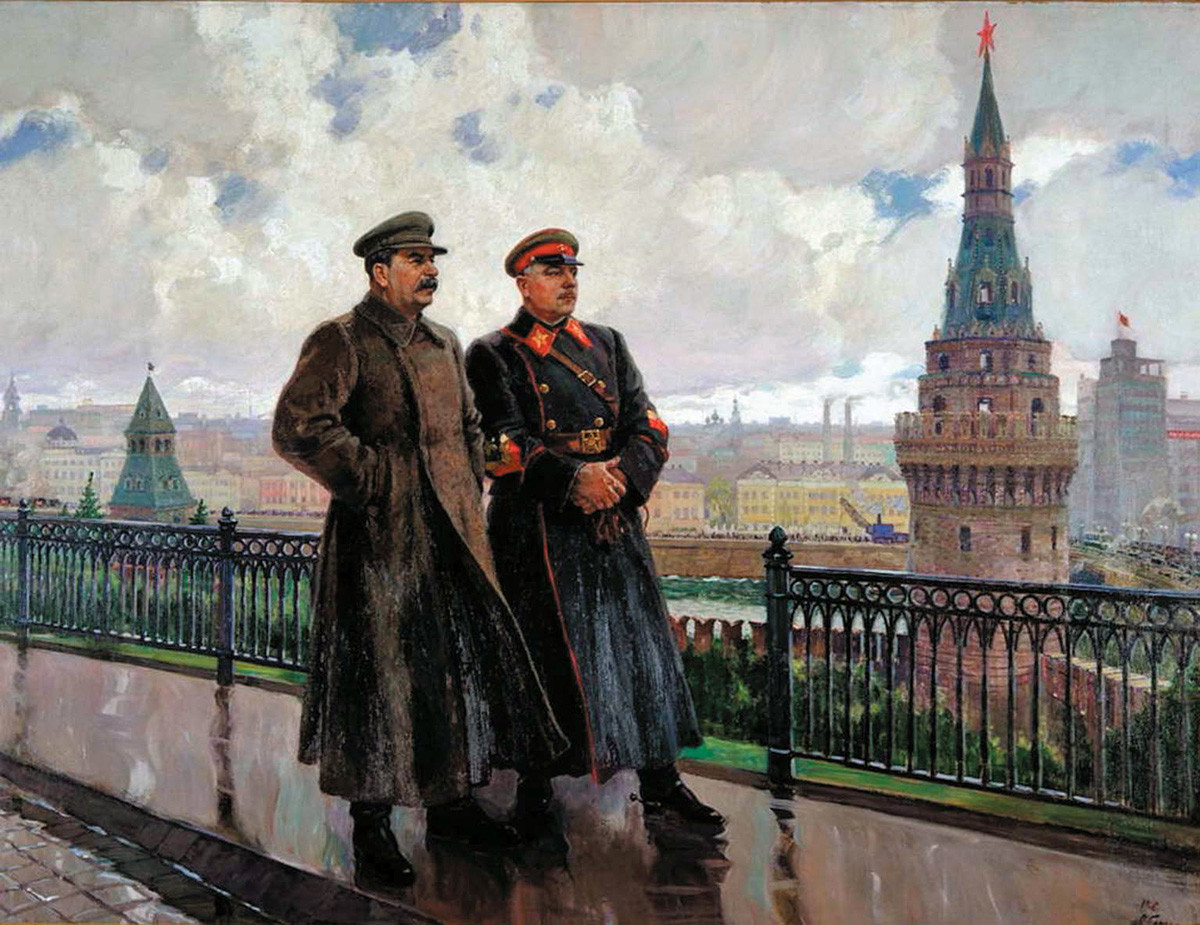 Alexander Gerasimov. I.V. Stalin and K.E. Voroshilov in the Kremlin, 1938

If you remove the central figures, their school is evident in the manner in which the reflections on the wet road are painted, in the fluffy clouds and the pinkish palette of the view of Moscow in the background. 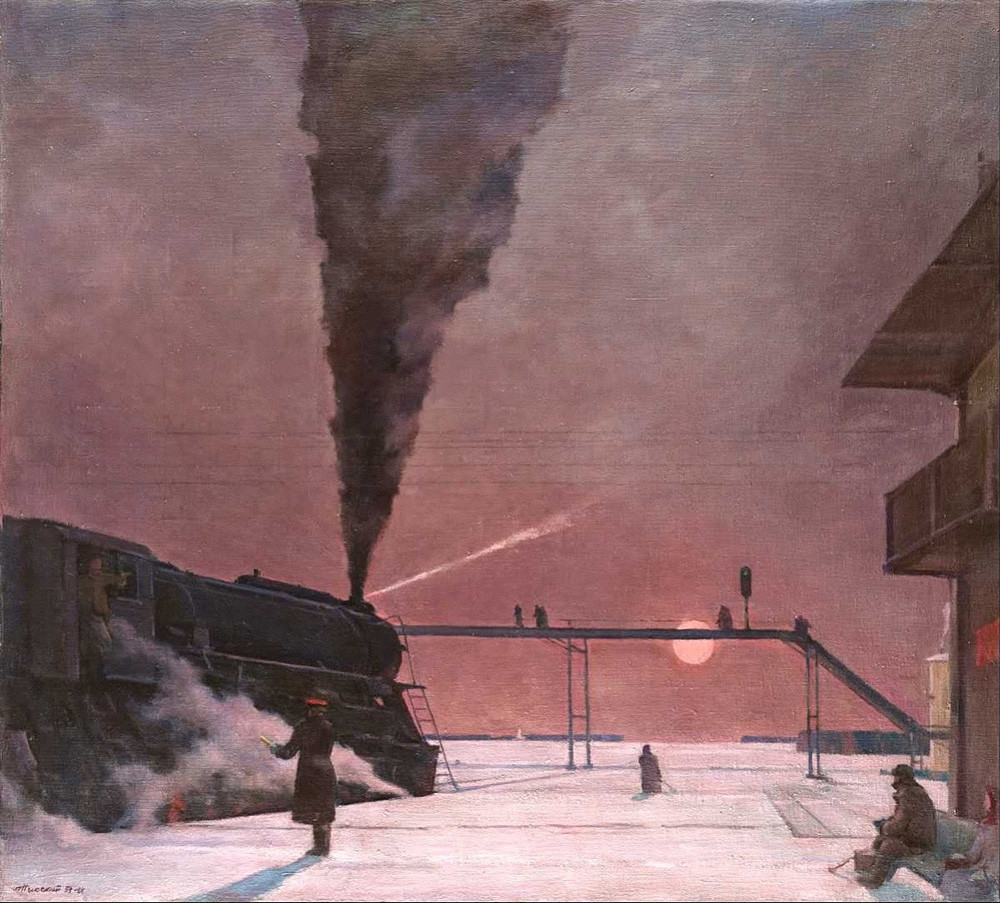 Sculptor Vera Mukhina, who designed the most famous Soviet monument, "Worker and Kolkhoz Woman," was a pupil of Antoine Bourdelle in Paris before the Revolution, and travelled to Italy to study the masterpieces of the Renaissance. In her work she employed classical proportion and the principles of classical sculpture.