What is 'Russian style' and how was it born? 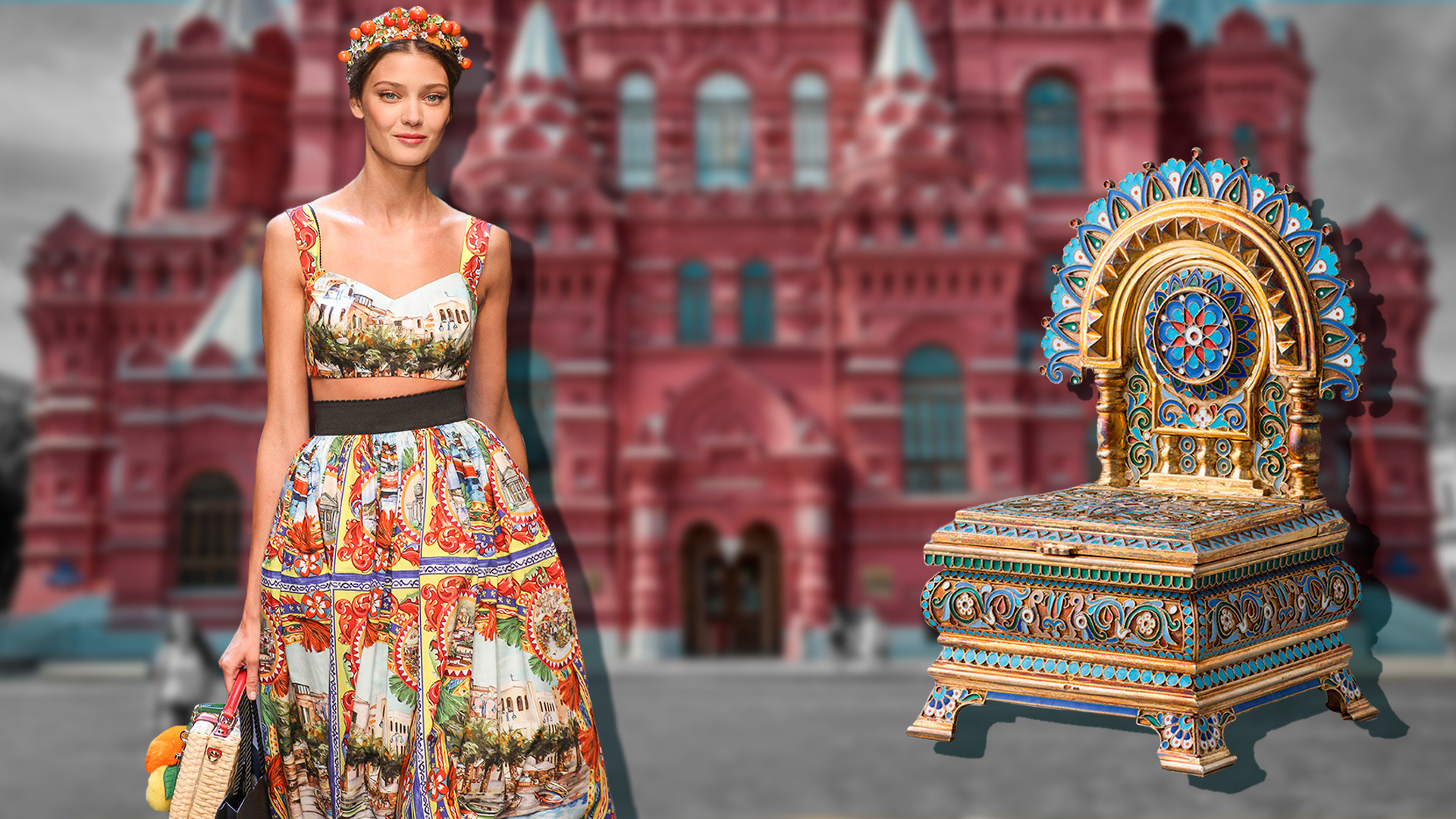 Skif-Kerch (CC BY-SA 4.0); Press photo; Legion Media
Bright colors, openwork ornaments, primitivist, animalist and floral motifs – all these are features of a distinctive Russian style. But where did it come from?

What is the first thing that comes to your mind when you hear the words Russian style? Most likely, kokoshniks - the traditional headdress worn by Russian women - Gzhel or Khokhloma patterns, or carved window frames. 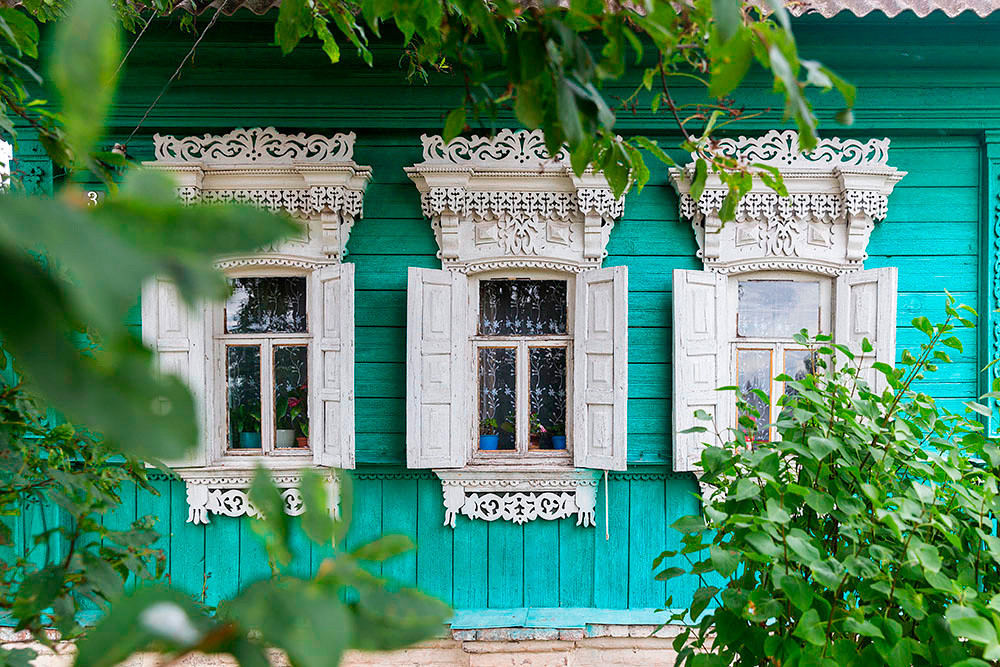 But how and when was this style born, and do these patterns have a meaning?

Peter the Great, having studied in Europe and established diplomatic and friendly ties with it, back home decided to get rid of everything “authentically” Russian: he waged an almost open war on everything archaic and medieval in Russia, zealously trying to make the country more modern and more European. The tsar invited Italian architects to build palaces instead of wooden quarters, forced boyars to wear European dress instead of traditional kaftans, to shave off their long beards and wear powdered wigs. 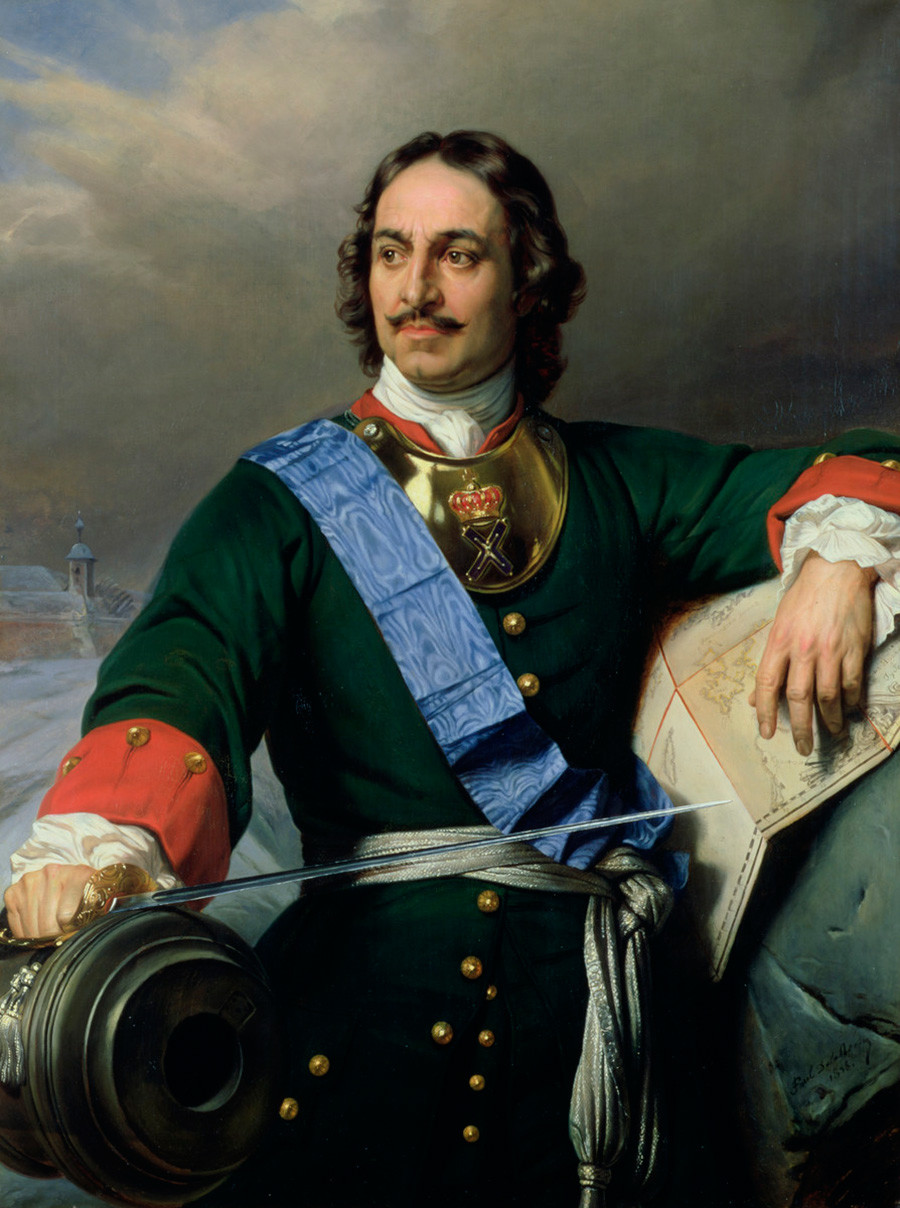 Paul Delaroche. Portrait of Peter I the Great

Over the next two centuries, his heirs developed the idea of a “progressive Russia”. Even traditional church architecture was replaced in the 17th-18th centuries by European Baroque.

Peter may have been able to control the nobility and official architecture in the capital, however, in the rest of the country, ordinary people and traditional crafts continued pretty much as before. 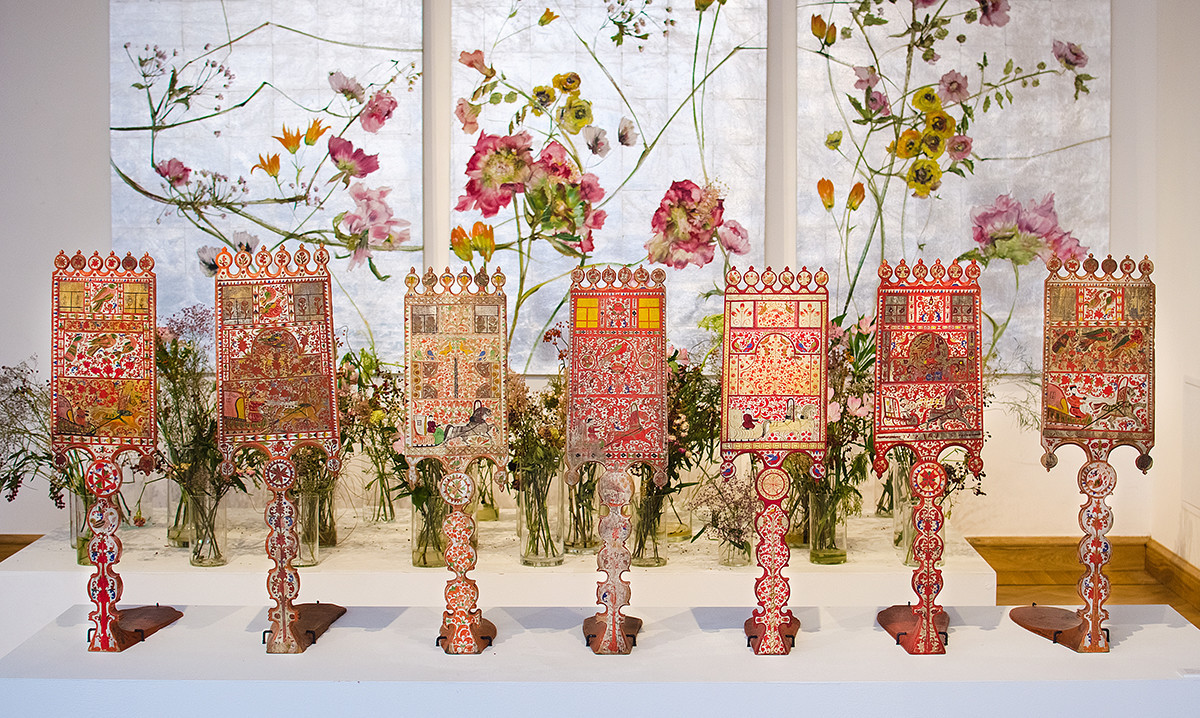 The authorities did not try to interfere with the styles of painting on distaffs or to regulate the patterns and motifs of handicrafts across the country. Furthermore, the reforming Tsar himself contributed to the Russian style by bringing from his beloved Holland Delft porcelain, whose white and blue colors were later copied by Gzhel craftsmen. 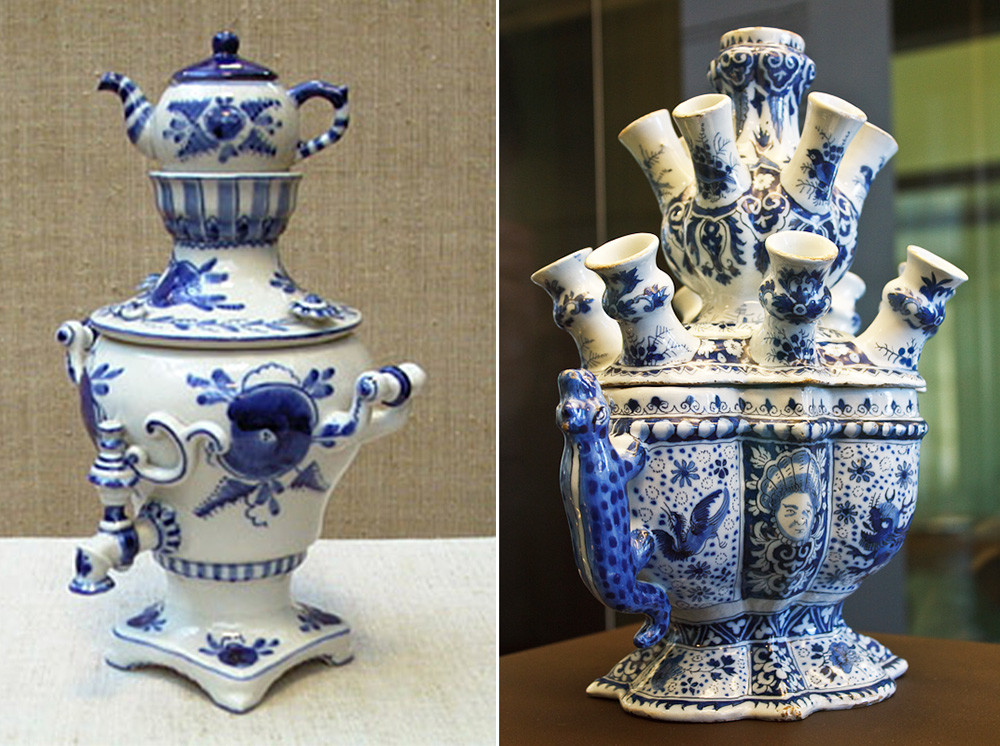 The Russian style may not have survived until the present day had it not been revived in the second half of the 19th century by the nobility, who - in search of a national idea and identity - had turned to their “roots”. Elements of primitive folk style came into fashion, while high society became interested in the life of common folk. In no small part, this trend was boosted by the Peredvizhniki (Itinerant) artists, who depicted the harsh reality of peasants' everyday life.

In addition, at the turn of the 20th century, there emerged an artistic movement Mir Iskusstva (World of Art), which sought to express authentically Russian motifs in visual arts. A fertile source of inspiration for it were Russian fairy tales, which is particularly evident in works by Viktor Vasnetsov. 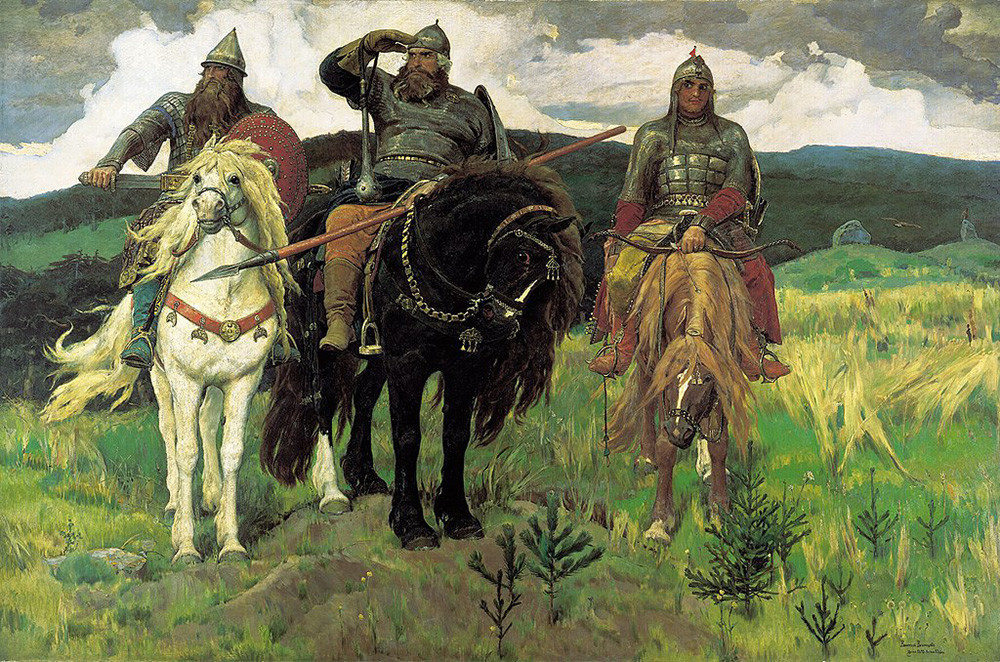 In the world of book illustrations, the best-known example of the Russian style were fairy tale graphics by Ivan Bilibin. 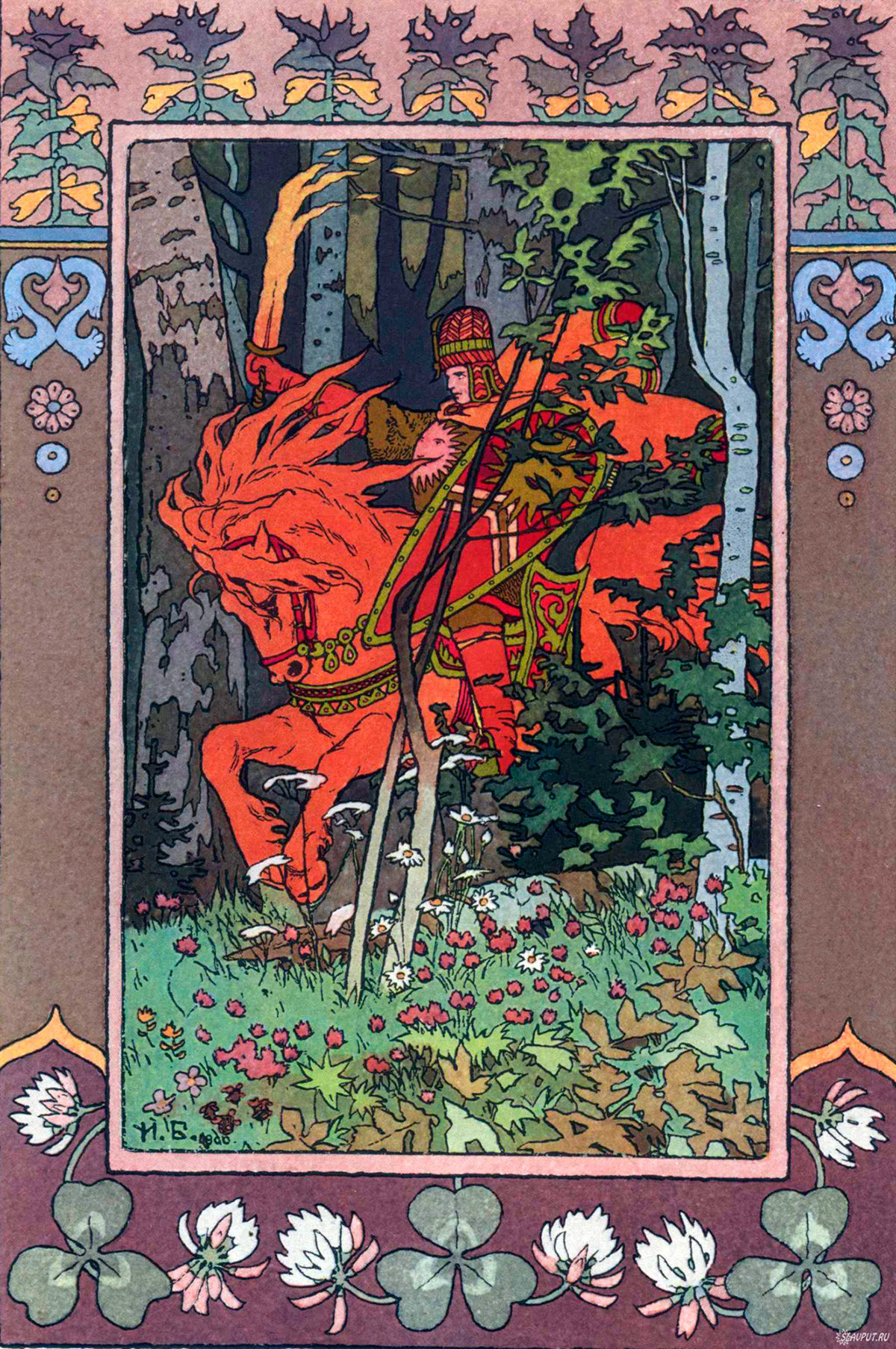 Russian bogatyrs and beauties in kokoshniks became popular images in marketing and trade, as they featured on various packaging. 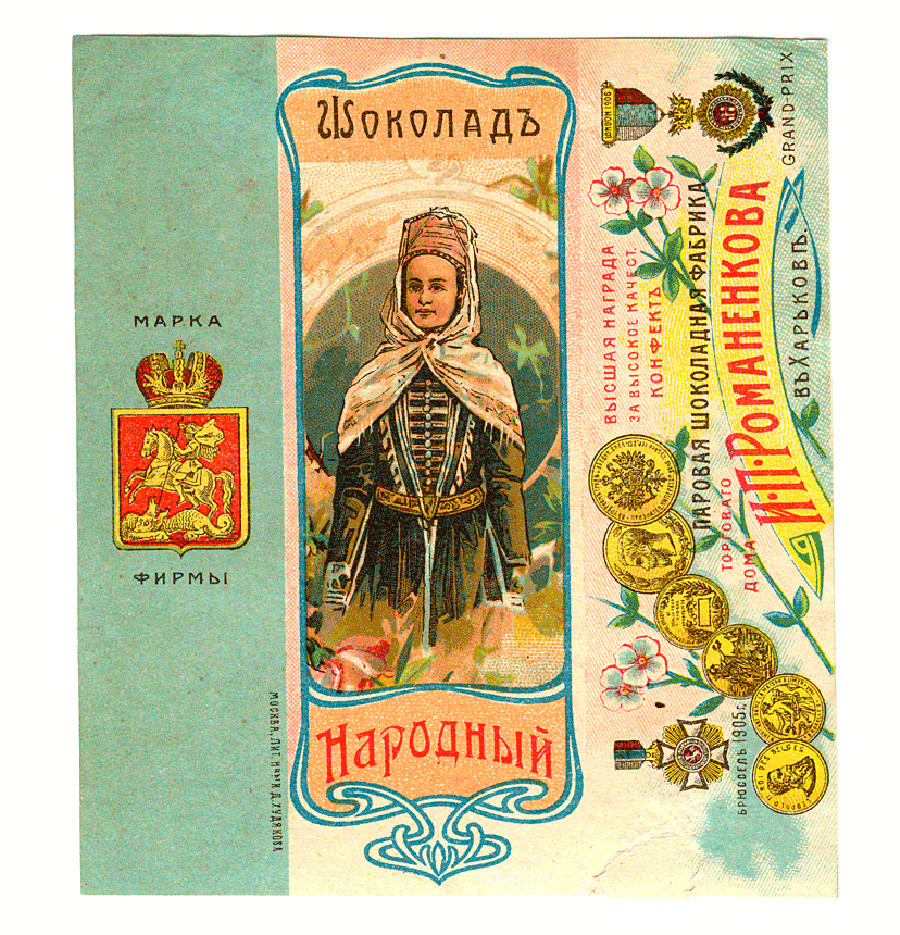 In theater too, the Russian style became very popular. At the beginning of the 20th century, entrepreneur Sergei Diaghilev organized his famous Russian Seasons in Europe, bringing together art exhibitions, ballet and opera. The most iconic production of his Ballets Russes company was Igor Stravinsky's “The Firebird”, costumes and sets for which were designed by Leon Bakst, another member of the Mir Iskusstva group.

Russian motifs appeared also in interior design as tiled stoves and traditional embroideries became fashionable. The art of jewelry joined in too: Faberge and other masters began to produce tableware and precious trinkets in the style of medieval Russia. 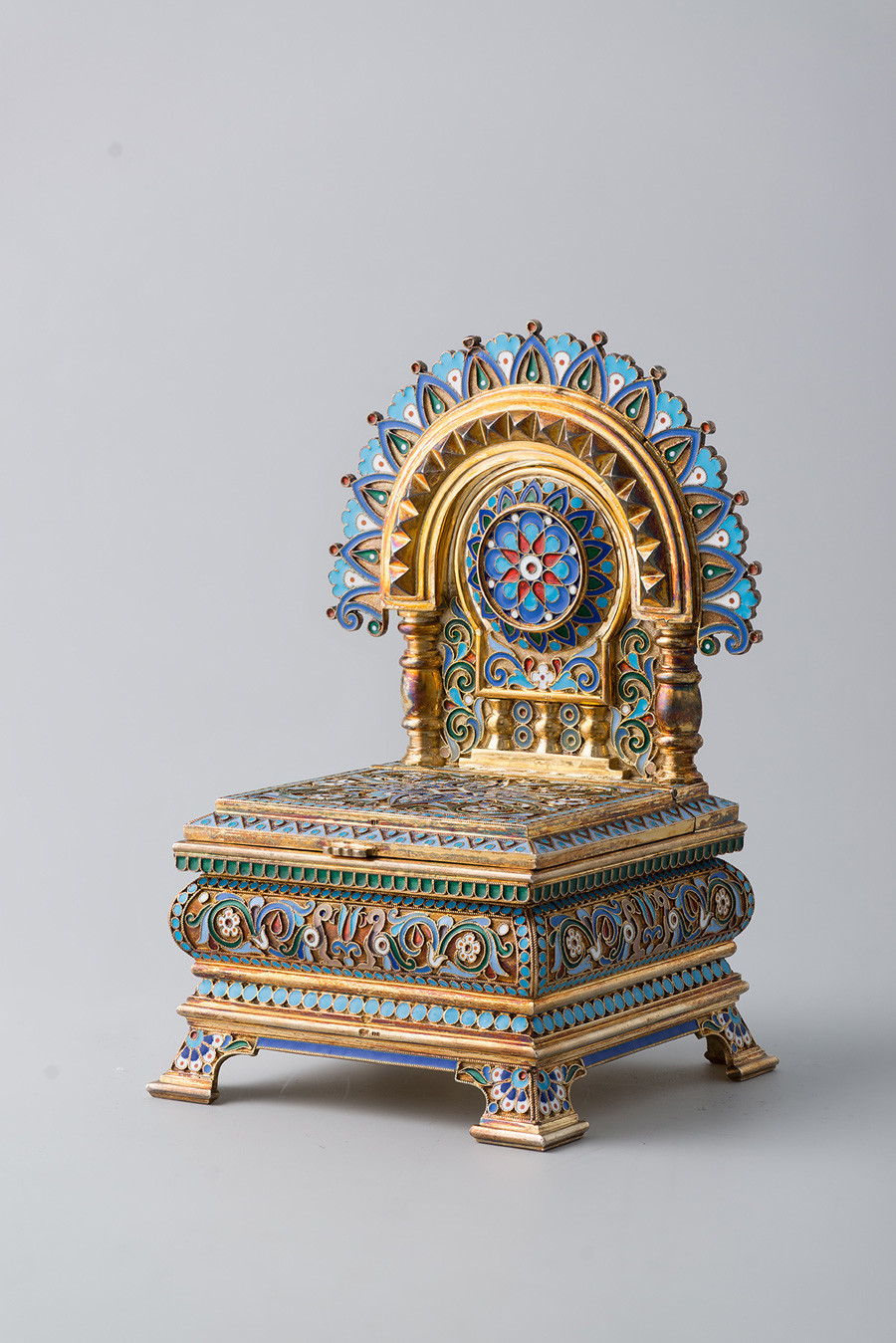 The pinnacle of this Russian revival style was the celebration of the 300th anniversary of the Romanov dynasty in 1913: the dress code for the legendary costume ball given by the last Russian emperor Nicholas II obliged guests to dress in fashions dating back to the period prior to Peter the Great and his reforms. 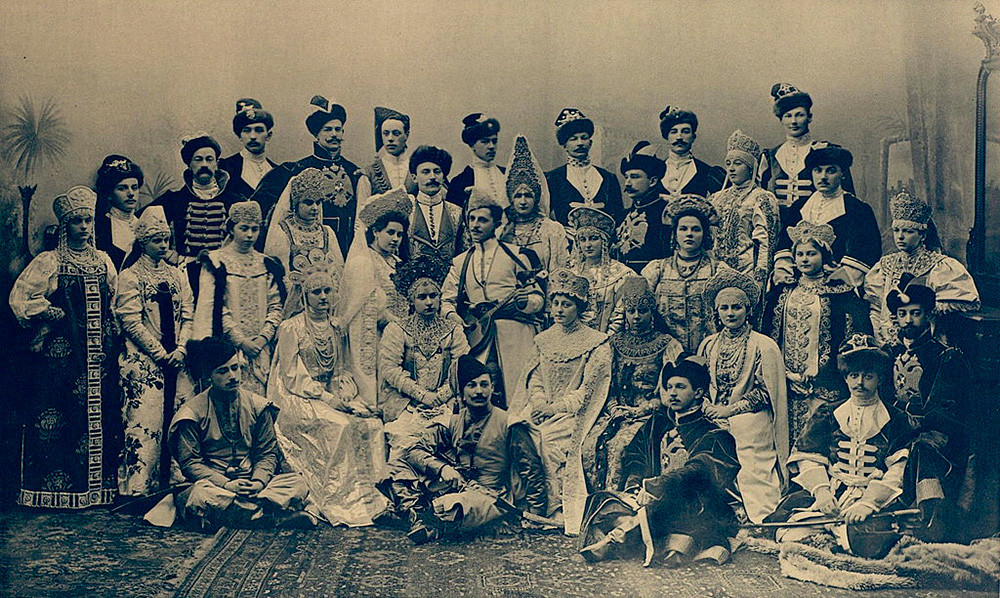 Guests of the royal costumed ball

But, of course, the Russian style found its most evident expression in architecture. It was particularly favoured by Emperor Alexander III, a reactionary and champion of traditional values. He was often compared to a Russian bear, while his spade beard presented a stark contrast with the elegant thin moustaches of his predecessors.

It was Alexander III who approved the construction of the Church of the Savior on Spilled Blood in St. Petersburg in the so-called Pseudo-Russian style, with its colored domes and mosaics. The building, so much at variance with the general look and feel of Peter the Great's imperial city, was built in 1883-1907 and is very similar to Moscow's St. Basil's Cathedral, which was built in the 16th century. 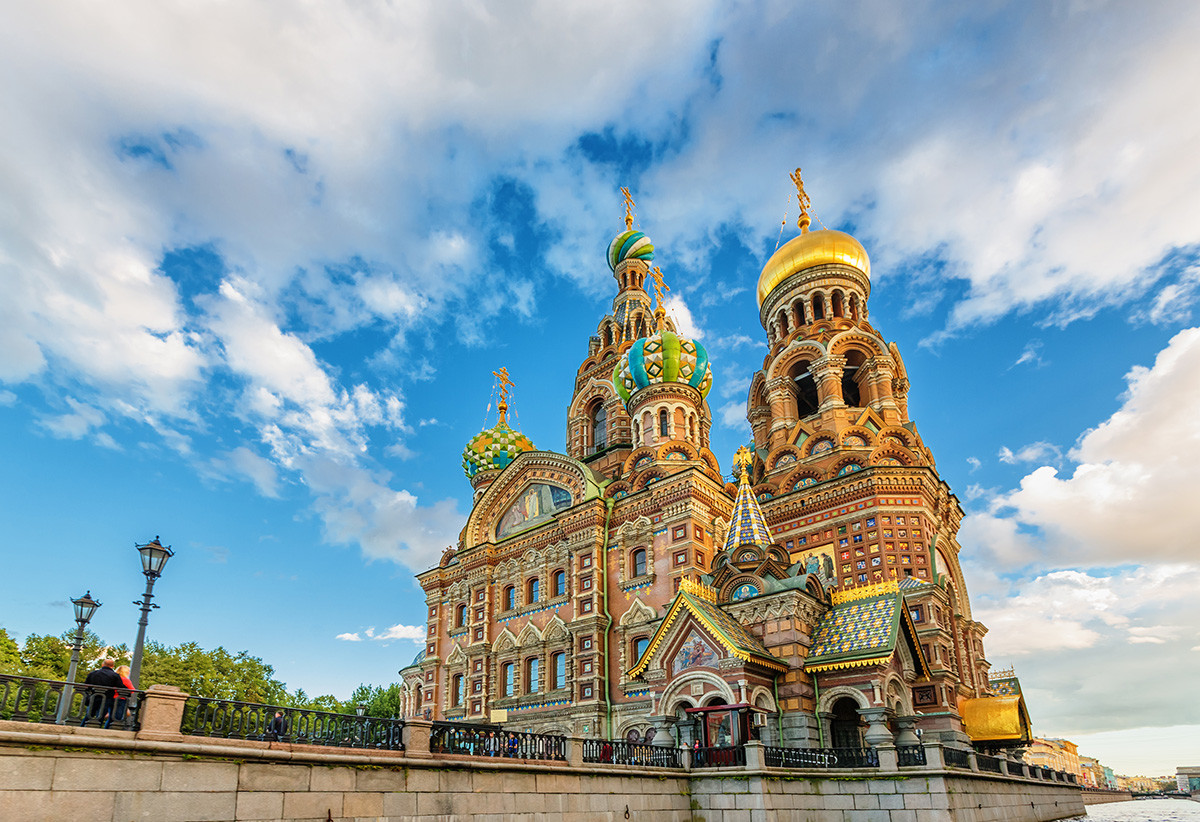 The architectural style which is commonly known as the Pseudo-Russian style has many examples in Moscow too. In the 19th century, the building of the Historical Museum was constructed next to the Kremlin, designed by architect Vladimir Sherwood. In order to fit in with the architectural ensemble of the Red Square, the building was built with red bricks and had numerous characteristic decorative features - convex details, arches, drop ornaments and other details typical of the wooden architecture of Old Rus. 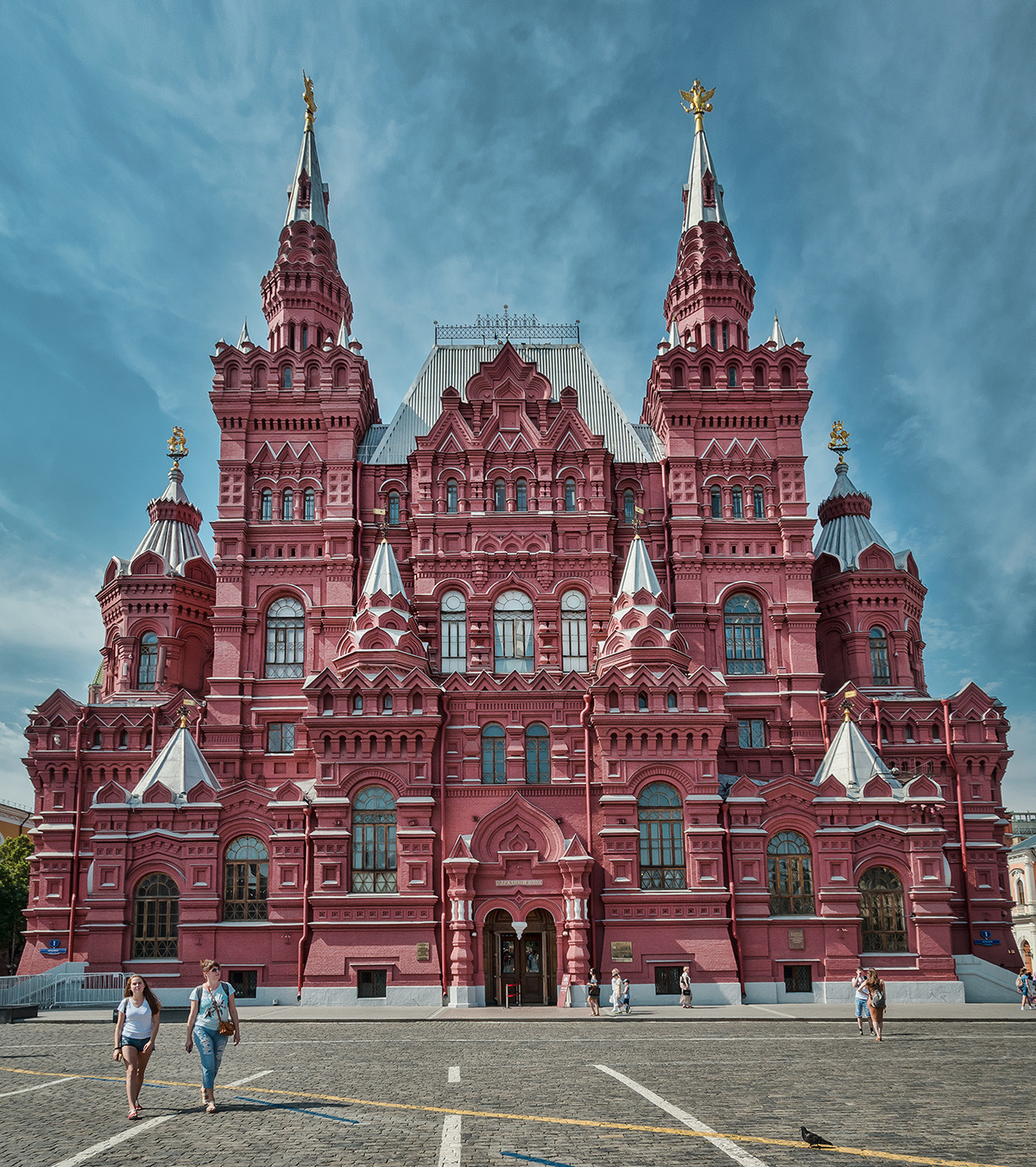 Soon after the construction of the Historical Museum, a similar-style building of the City Duma was erected nearby (it now houses the Museum of the Patriotic War of 1812). 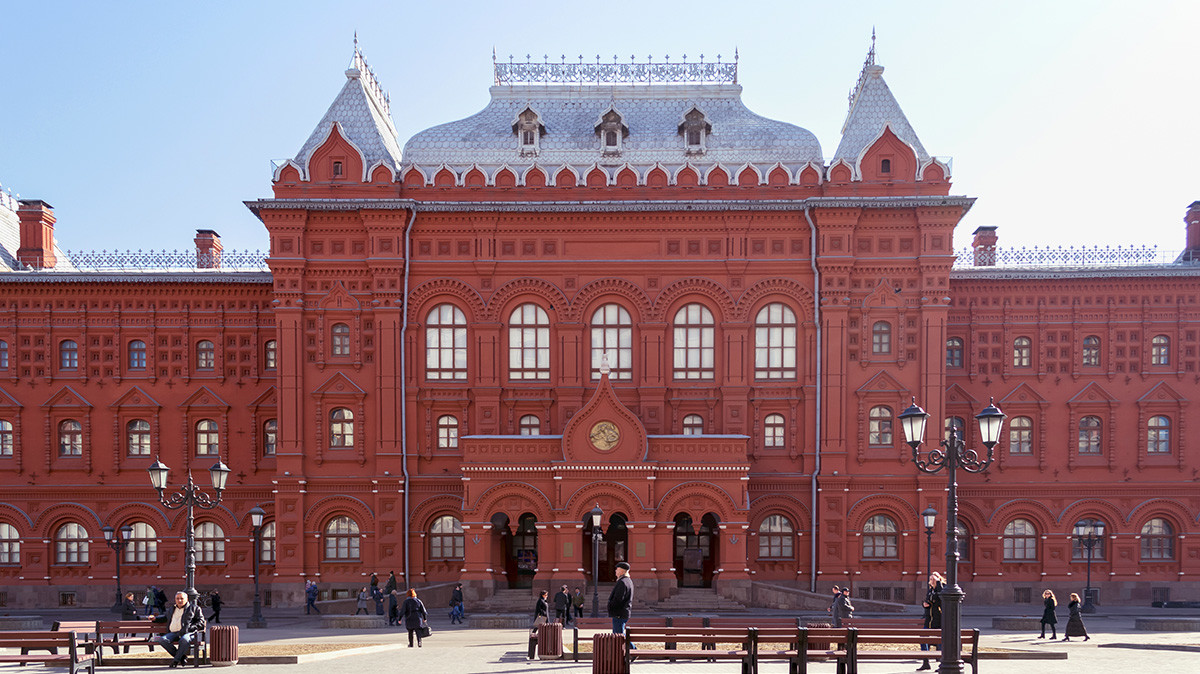 When commissioning the building for a future Museum of Russian Antiquities, art collector Pyotr Shchukin wanted it to resemble the traditional chambers of Russian boyars. In Soviet times, the building became home to the Timiryazev Biological Museum. 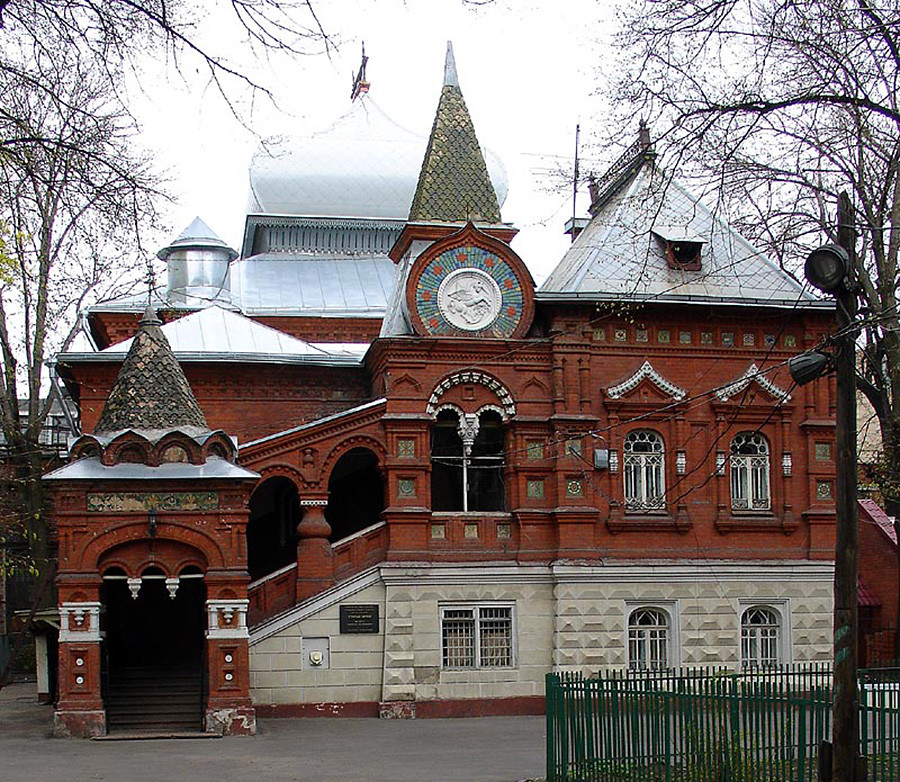 The Timiryazev Biological Museum in Moscow

There were also buildings imitating wooden architecture of the 16th-17th century. For example, the house of Slavophile Mikhail Pogodin in Moscow has numerous wooden patterns and carved elements, like many similar buildings throughout Russia. 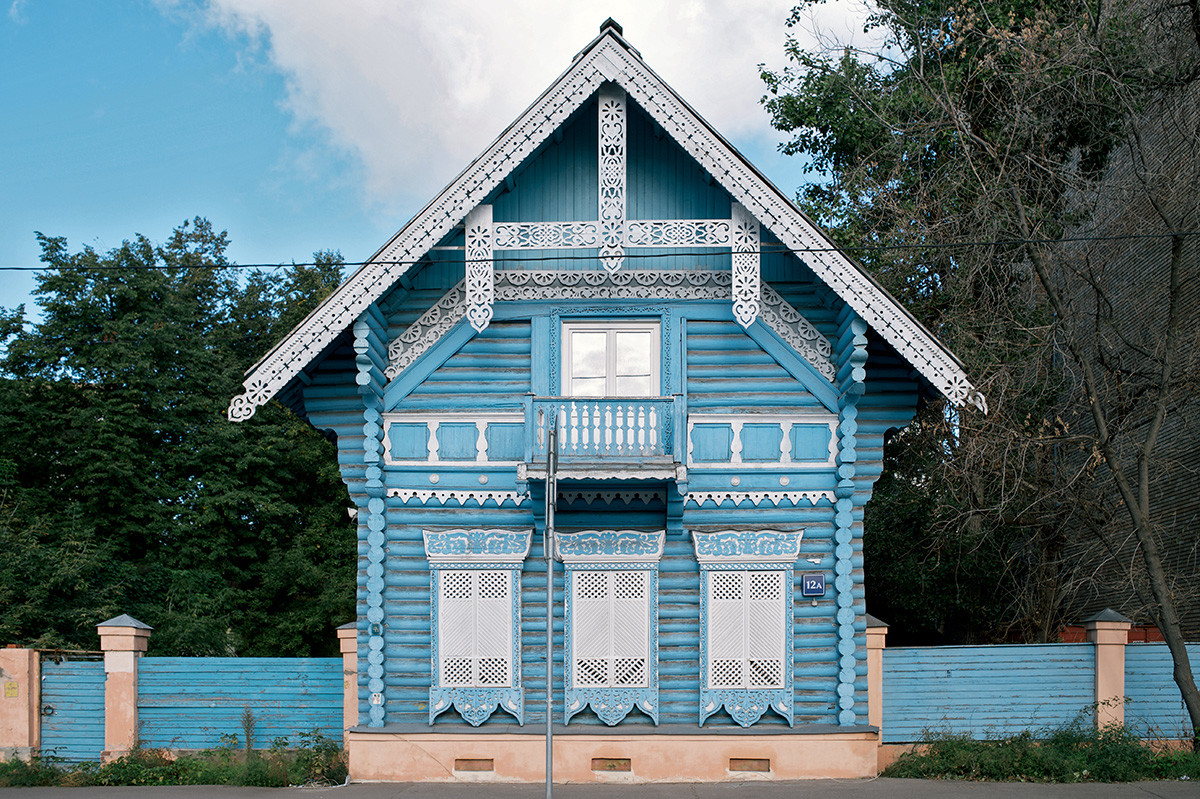 In the 20th century, architects came up with a fanciful combination of the Pseudo-Russian Style and Art Nouveau. For example, the Yaroslavsky Station in Moscow, designed by Fyodor Schechtel, is built in this style. 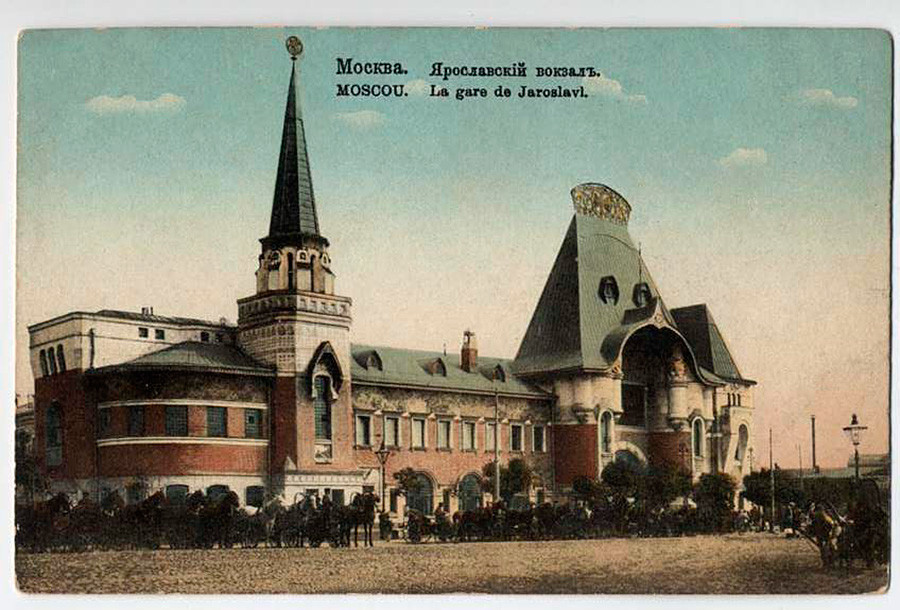 The Yaroslavsky Railway Station in Moscow on a pre-revolutionary postcard

The 2000s saw yet another revival of the traditional Russian style that could be described as neo-historicism. In the Moscow estate of Kolomenskoye, the wooden terem of Tsar Alexei Mikhailovich, father of Peter the Great, was restored according to old sketches. 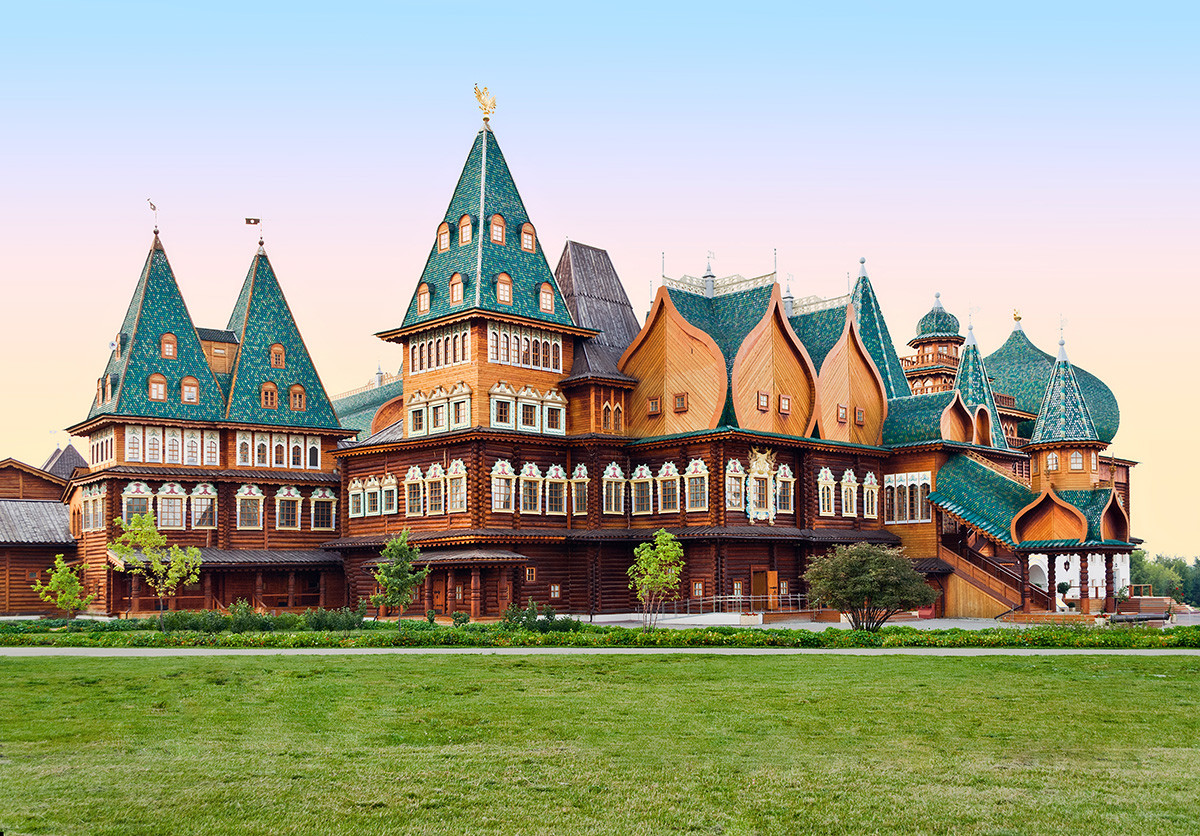 In the Izmaylovo Park, an Izmaylovsky Kremlin entertainment complex was built in a style imitating Russian architecture of the 16th-17th centuries. 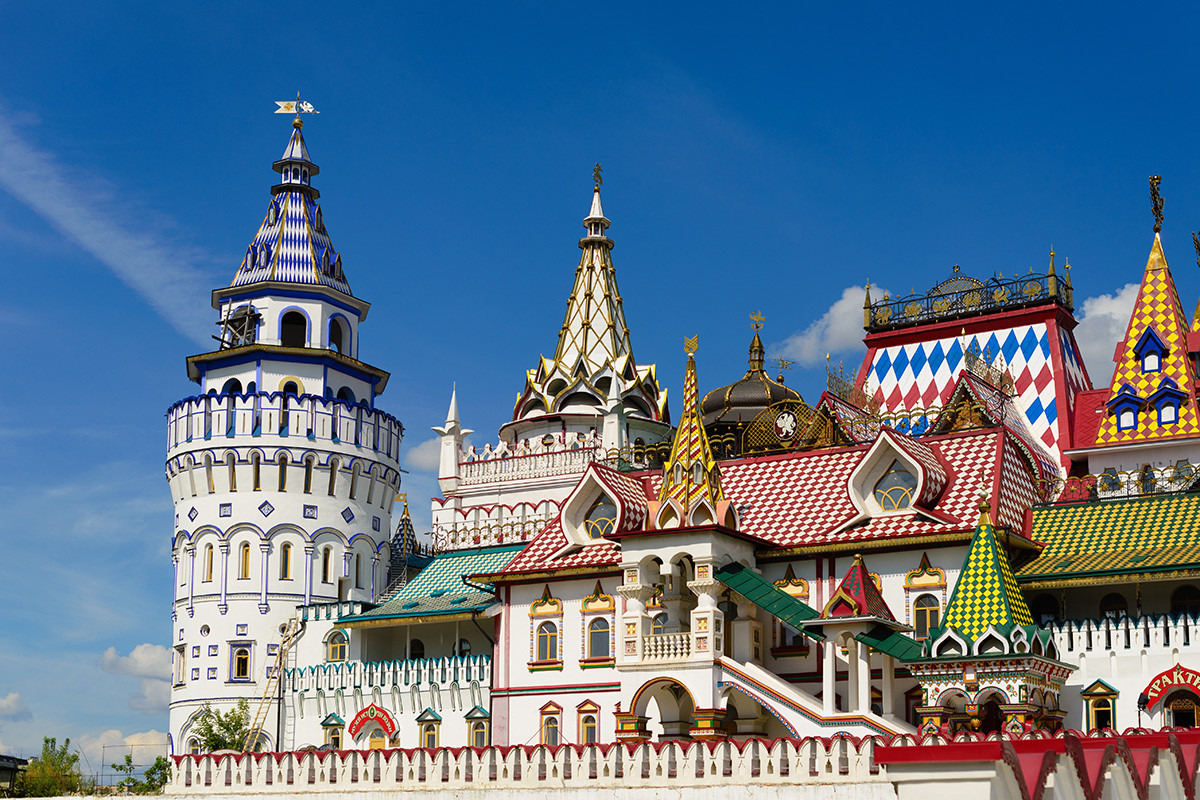 Traditional Russian motifs have inspired businesses too: in the provinces there are hotels inviting visitors to stay in a traditional Russian hut or try a Russian banya. In recent years, more and more Russian restaurants have opened, offering both traditional Russian cuisine and a modern re-imagining of familiar products and recipes. One of the most famous Russian-style restaurant chains, MariVanna, has branches in London, New York, Moscow, and Baku and promises its customers a “genuine Russian spirit”. 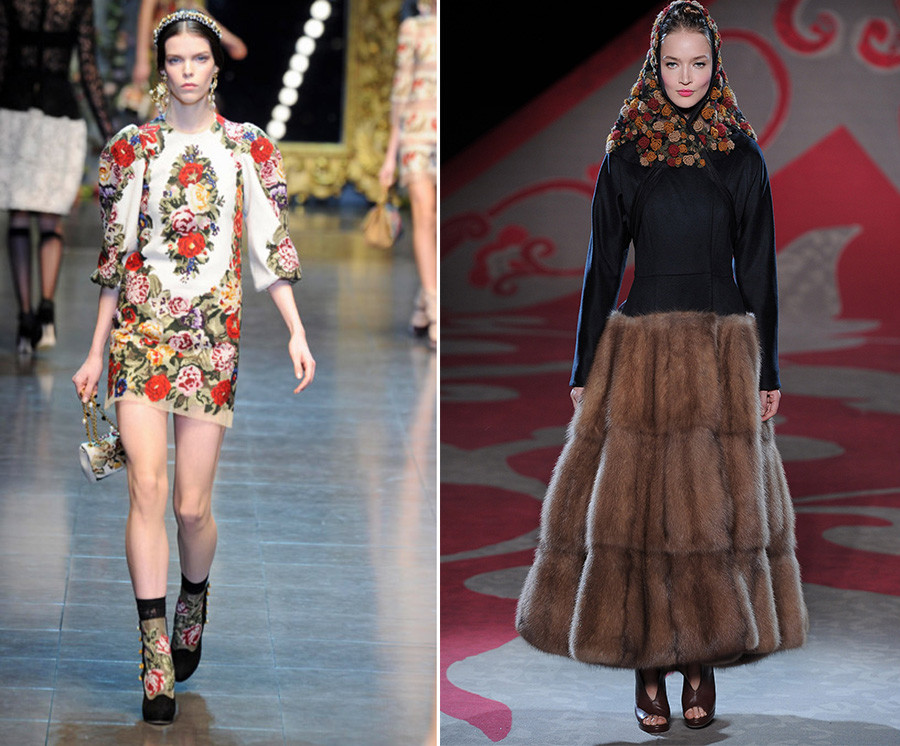 Fashion designers, both internationally famous ones as well as their lesser-known Russian colleagues, began to use national Russian motifs in their collections. Many of their elements reference traditional handicraft patterns, be it lace, flowers on Pavlovo Posad shawls, or blue-and-white Gzhel colors and patterns.