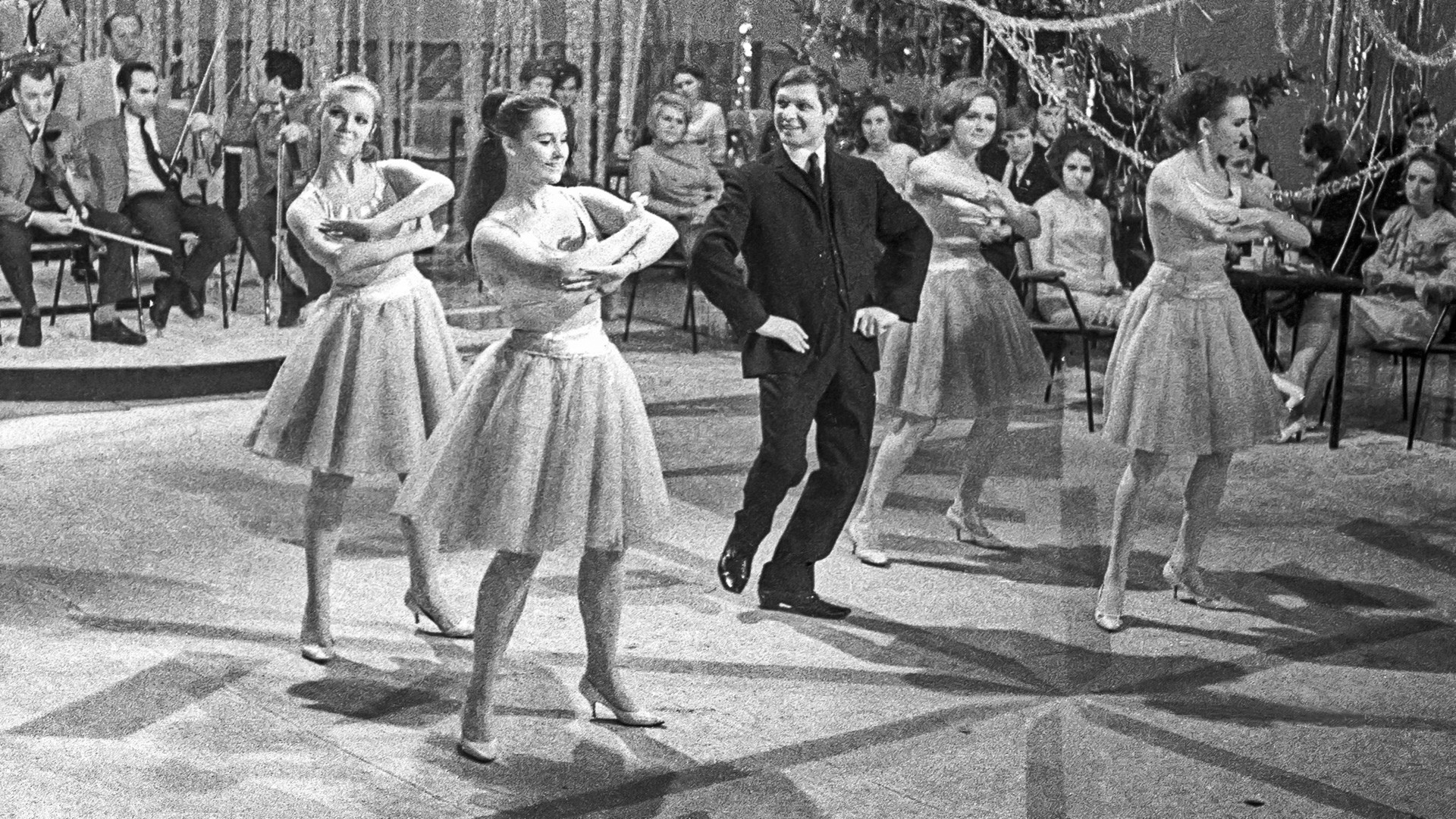 S.Gerasimov/TASS
However distant the culture of Soviet Russia might seem to us today, a lot of its music still appeals and resonates with modern listeners worldwide.

Due to the principles of socialist realism—the main Soviet style that easily extended from visual arts to music, most Soviet songs were designed to be simple, lighthearted and relatable to everyone. So, rushing to the end of the tumultuous year 2020, you might want to check out some sweet, utopian tunes of the Soviet 1960s and 1970s.

Music was one of the Soviet Union’s main tools for spreading its ideology and values to the people. It also reflects the many changes in the mood of the Soviet people through the 20th century. The revolutionary music of the 1920s reminded the citizens of their duty to rise up and build a new country; the patriotic songs of the 1930s reinforced and glorified the new regime of Joseph Stalin; and then, of course, came the military songs of the 1940s, filled with the pain and losses of World War II, but also called for the people to stand up for the motherland against her enemies. During Nikita Khruschev’s brief period of liberalization, the so-called “Thaw” of the late 1950s, Soviet music shifted to much more romantic, individualistic and apolitical themes.

What we generally think of as Soviet music today comes from a very curious combination of various influences: folk tunes, military marches and even western pop music (regardless of the Soviets’ resolute opposition to it).

This song was a major Soviet hit in the 1950s, heralding a new wave of Soviet music that would move away from the heroic and pompous. The text of the song was written in 1953, and features the line “I’m in love with a married man,” which was quite shocking for the late Stalinist era. That’s why the song first appeared only in 1957, in the film Дело было в Пенькове (‘It Happened in Penkovo’), directed by Stanislav Rostotsky. Both the film and the song became audience favorites, and helped move the culture’s focus away from the stories of collective achievements and deeds of heroic citizens to the personal dramas and feelings of everyday people.

You can find the lyrics and translation in the description of the video.

‘The River Volga Flows’, performed in 1963 by Lyudmila Zykina, a National Folk Singer of Russia, became the musician’s signature song and granted her the lifelong title of “Miss Volga.” Since its release, the song has been especially beloved by the people of the Russian provinces for its authentic subject and slow, melodic singing, akin to what one could hear at family gatherings or celebrations in villages all across Russia during the last century. (Lyrics and translation).

The video is one of the most beautiful and emotional scenes in all Soviet cinema. In it, the lead character Anna Grigoryevna is sitting in a taxi, whose driver has just told her that his favorite song is called ‘Tenderness.’ Anna then tries to remember the name of her own favorite song, and begins to sing part of it. Ironically, Anna sings the very same song that the taxi driver was thinking of, without knowing its name. The character’s singing transitions into Maya Kristalinskaya's wonderful recording of the song as the culmination of this short and unusual love story. (Lyrics and translation)

Yelena Kamburova’s Маленький Принц  (‘Little Prince’) is a perfect example of how, while just a decade or two before, the Soviets were singing of industrial and socialist dreams, the singers of the new era had shifted to dreams of fairytales and much more personal subjects. Little Prince is indeed inspired by Antoine de Saint-Exupéry’s novella of the same name. Far away from any political or social references, this music is full of hope for the future—a personal future, filled with wonder and happiness. (Lyrics and translation)

A leading Soviet baritone of Azerbaijani descent, Muslim Magomayev accompanied Larisa Mondrus for this romantic song, heavily influenced by sumptuous American popular singing, such as Elvis and that of even Phil Spector’s production projects. So if you like American music from the 1960s, this song and video will be a perfect Russian alternative, featuring the beautiful voices of the soloists, an extensive orchestral accompaniment, and of course a lot of snow and fur coats. (Lyrics)

Popular Soviet and Russian baritone Eduard Khil, mainly known as Mr Trololo for the 21st century Western audience, had numerous hits during his career. The song Зима  (‘Winter’), inspired by folk fairy tales, evokes an old Russian fair, while its video looks more like American television from the 1960s, though much humbler and tamer. (Lyrics and translation)

Aida Vedischeva performed this song in the children’s film Ох уж эта Настя (‘Oh, that Nastya’), the story of a girl who can’t help creating unrealistic stories about life around her. The song’s character asks a forest deer to take her to the far land of fairytales and dreams. After Vedischeva’s emigration to the far lands of the United States in 1980, the music and television companies tried to erase all her audio and video recordings as a way to denounce Vedischeva’s betrayal of the motherland, calling other musicians to perform all her music instead. Though this very performance by Vedischeva from 1971 remained the one the Russians remembered best. (Lyrics and translation)

One of the main hits of the 1970s—and apparently an Aeroflot advertisement, Увезу тебя я в тундру (‘I’ll take you to the Tundra’) by Kola Beldi fostered the idea of multiculturalism and unity of all the diverse cultures and nations throughout the Soviet Union. In the song, the singer addresses his beloved, promising that he’ll take her to the tundra and give all the gifts of the North. Sung by Beldi, one of the Nenets people, the song contributed to a greater interest in this small ethnicity and culture in Northern Russia, simultaneously bringing awareness of the grandeur and boundlessness of the Soviet territory. (Lyrics and translation)

As you may have noticed already, most Soviet videos were rather calm and static, focusing mainly on the performers’ faces and singing. This song is so dramatic and engaging, however, that it balances this steadiness quite well. The song is performed by Anna German, a Polish singer who met a tragic fate, but was extremely beloved throughout the whole Soviet Union and received standing ovations after almost every performance. (Lyrics and translation)

Мгновения (‘Moments’) by composer Mikhail Tariverdiev first appeared for audiences as a soundtrack of the tremendously successful series Семнадцать Мгновений Весны (‘Seventeen moments of spring’). The 12 episodes of the series tell the story a Soviet spy on a mission in Nazi Germany during the last months of 1945. As some witnesses remember, whenever a new episode appeared on TV, the streets would be empty as nobody wanted to miss a single part of the story. The famous series would always start and end with ‘Moments,’ performed by Joseph Kobzon, whose singing truly became the leitmotif of 1973. (Lyrics and translation)