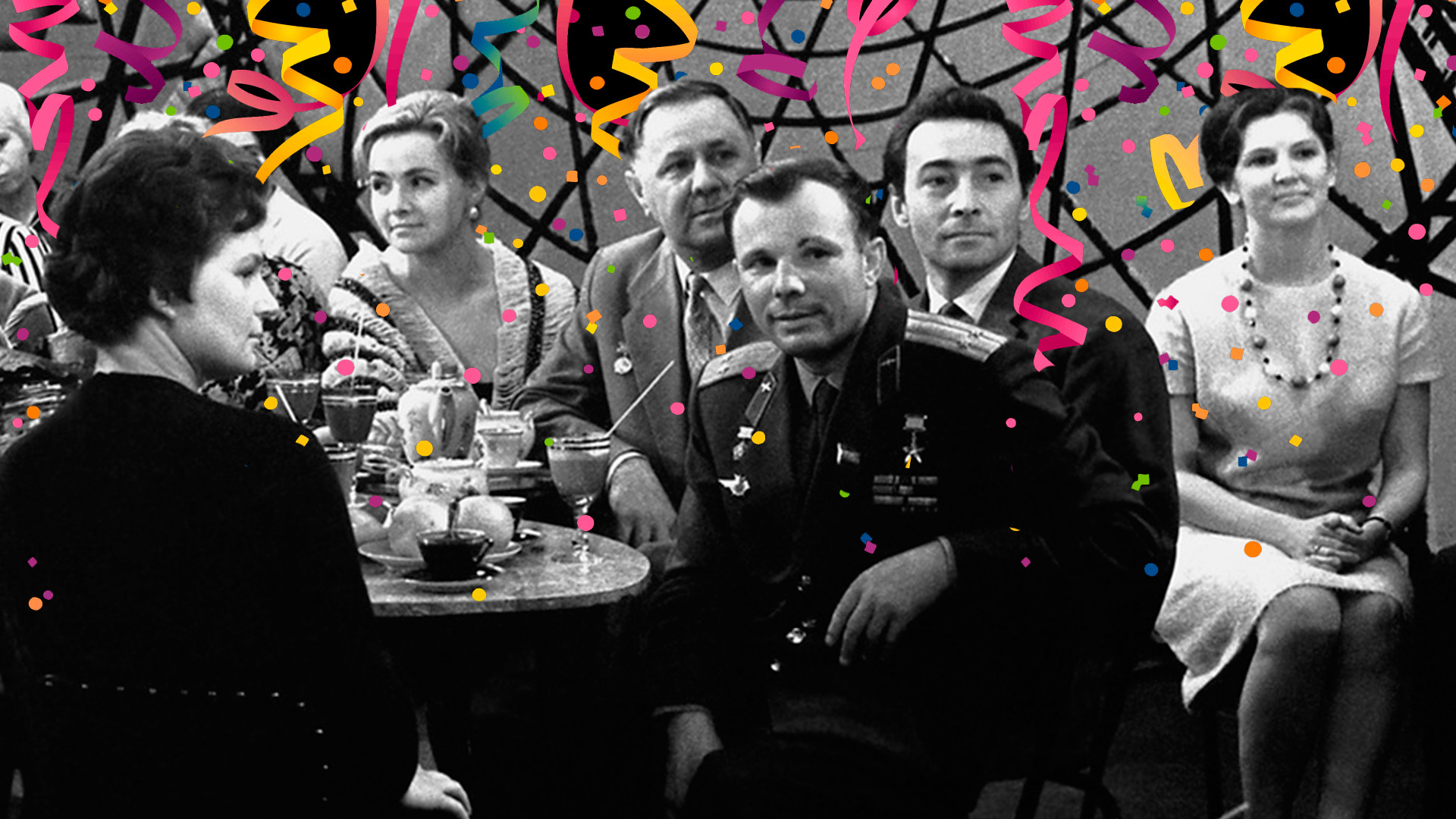 Anatoly Kovtun/MUMM/MDF
Soviet performers would fight with each other for a chance to appear on the country’s main New Year TV show. Which is not at all surprising, since comedy sketches performed on that program were discussed for weeks after and many of the songs that premiered would become the nation’s favorite hits for decades to come.

1. After the first ever edition of Little Blue Light, indignant viewers flooded its production company with complaints: “How can one drink and sing at the same time? Or is it not Urazbayeva singing but somebody else altogether? If so, what sort of singer is she?” The controversy arose after Soviet singer Elmira Urazbayeva had allegedly lip-synched a song on live TV.

During her performance, Urazbayeva approached one of the tables (the studio audience were seated at tables like in a restaurant), a guest offered her a glass of champagne, she took a sip, it went down the wrong pipe and she began coughing, while her song continued to play. That became the Soviet audience’s first encounter with lip-synching. As composer Levon Oganezov recalled, “the embarrassment was huge”.

2. Little Blue Light was the first entertainment talk show on Soviet TV. Originally, it was called Television Café and consisted of celebrities and ordinary people sharing interesting stories and chatting informally. At first, the program was filmed in a real café, but later, the atmosphere of a festive feast was recreated in a studio.

The first editions of the program, which came out in the 1960s, were broadcast live every weekend. Later, the program was aired on New Year’s Eve and on International Women’s Day, but no longer live. 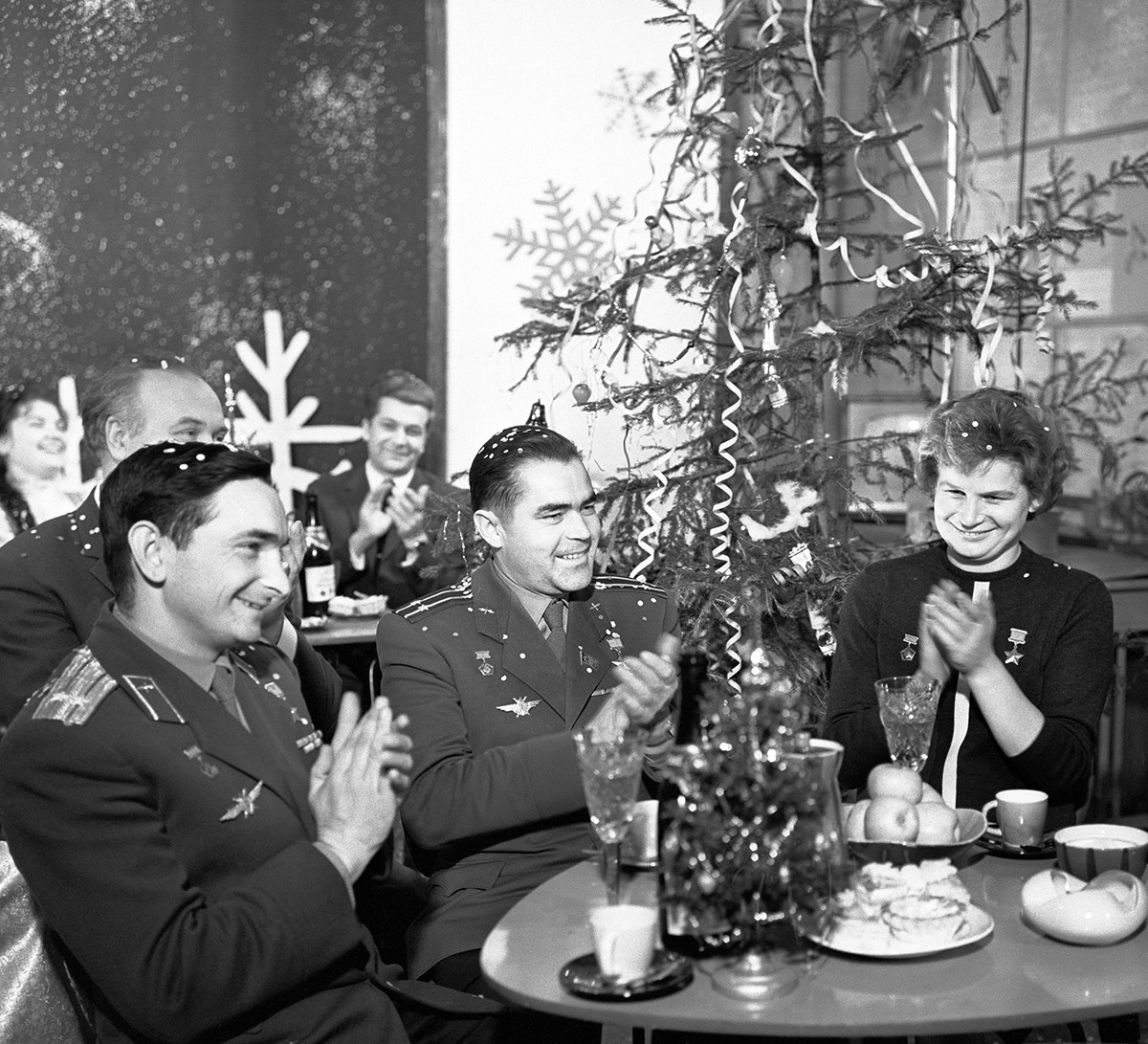 3. The program’s new name, Little Blue Light, had its origins in a feature of new-generation TV sets called ‘Rekord’, whose production was launched in the early 1960s by the Alexandrov Radio Plant: they were still black-and-white, but their screens had a bluish glow, which inspired the authors of the program. 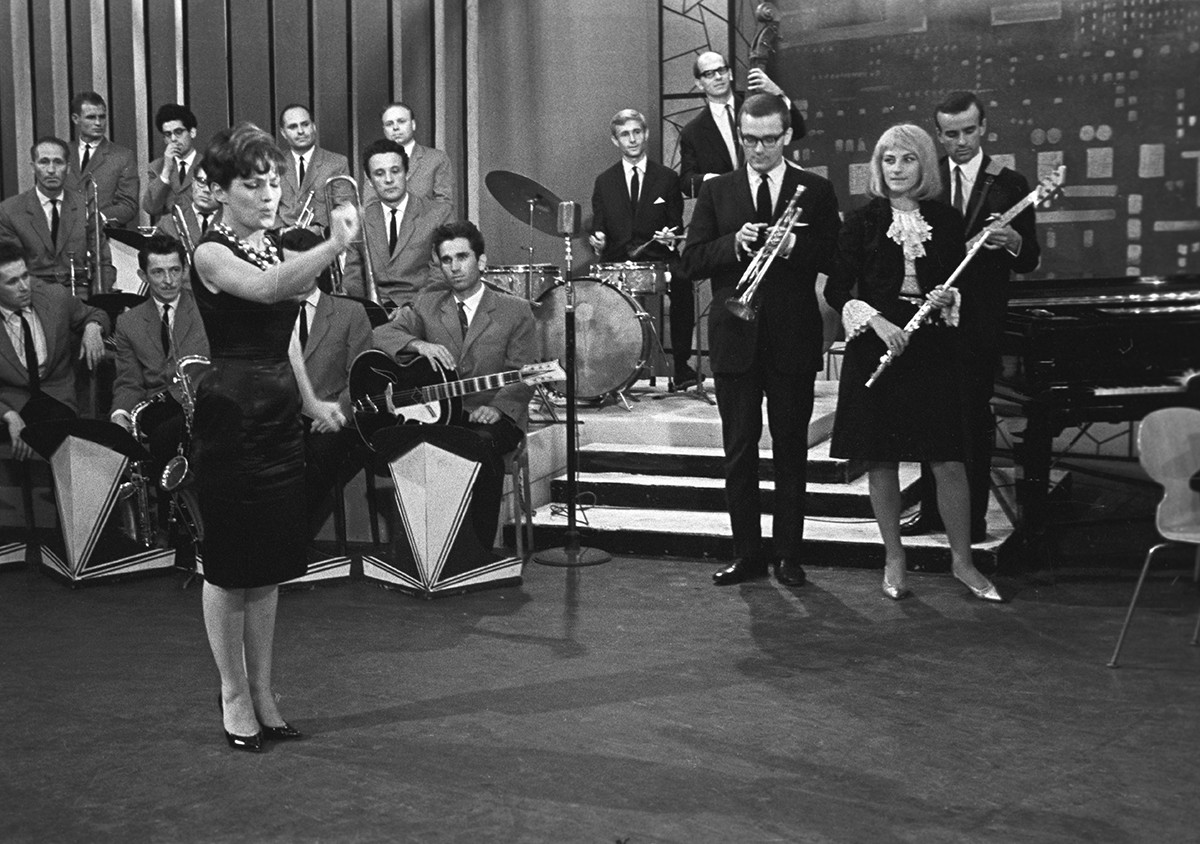 The program "Little Blue Light" is performed by the Polish film actress and pop singer Barbara rylska with the Polish pop ensemble under the direction of K. Sadovsky. 1964

4. One of the first and most memorable guests on Little Blue Light was Yuri Garagin, the first man in space. There is even a recording of a New Year toast he made. He also took part in several sketches and co-hosted a special edition of Little Blue Light that was broadcast on International Women’s Day.

5.  Each edition of Little Blue Light lasted two hours, but preparations for it took several months, starting in August. At the end of summer, performers presented their numbers, they were approved at the Main Department of Music Programs, while filming of the program itself would start in September. Often editing of the program was completed just several hours before the New Year came to the Far Eastern regions of the country. Getting a slot on the program was not easy. For example, competition was very tough among comedians, with up to 20 people (who also made it through earlier elimination rounds) vying for a single spot. 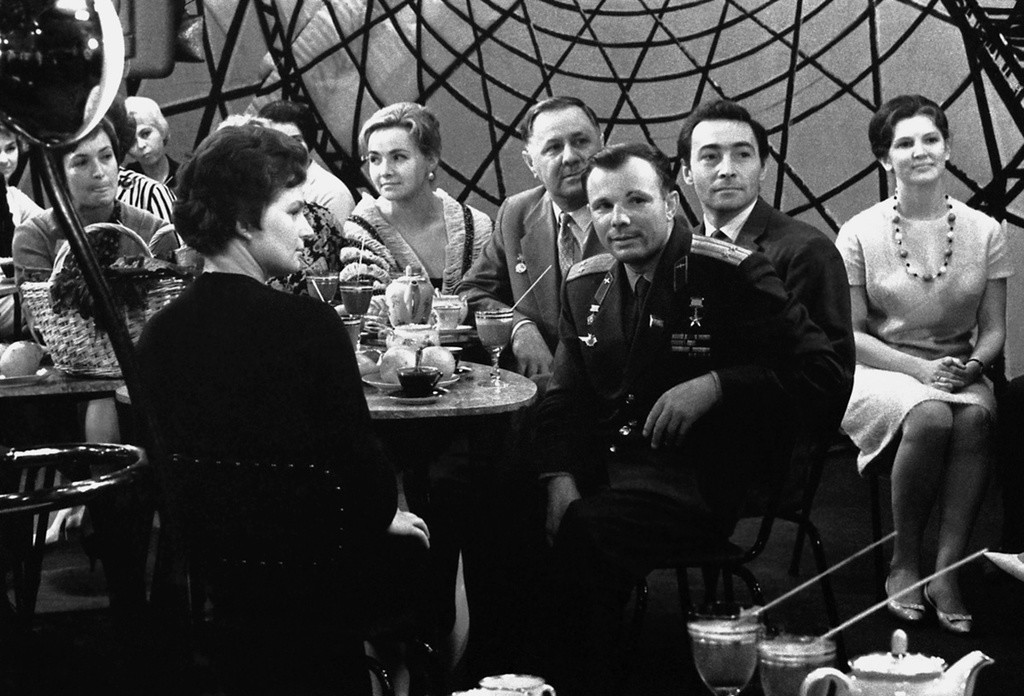 6. Initially, real alcohol was served during filming, with guests being treated to Sovetskoye champagne, TV presenter Igor Kirillov claimed in an interview for the Komsomolskaya Pravda newspaper. According to him, several crates of champagne were consumed during the filming of each program.

“Not all performers and composers knew where to stop, so they were served bottles of cider with champagne labels stuck on them,” Kirillov recalled.

But guests would still bring their own alcohol with them and secretly drink cognac before filming began. In the 1970s, real alcohol was replaced with lemonade or colored water, while fruit and sweets on the tables were made of papier-mâché.

7. One of the most memorable performances in the history of the program was delivered by Soviet singer Iosif Kobzon, who sang a song called Cuba, My Love posing as Che Guevara, in a fake beard and holding an assault rifle in his hands.

8. Little Blue Light had a special relationship with figure skating, often showing performances by leading figure skaters of the time. Sometimes other celebrities tried putting on skates, for example actor and stand-up comedian Arkady Raikin. In effect, that was the first TV show in the USSR to feature celebrities dancing on ice. 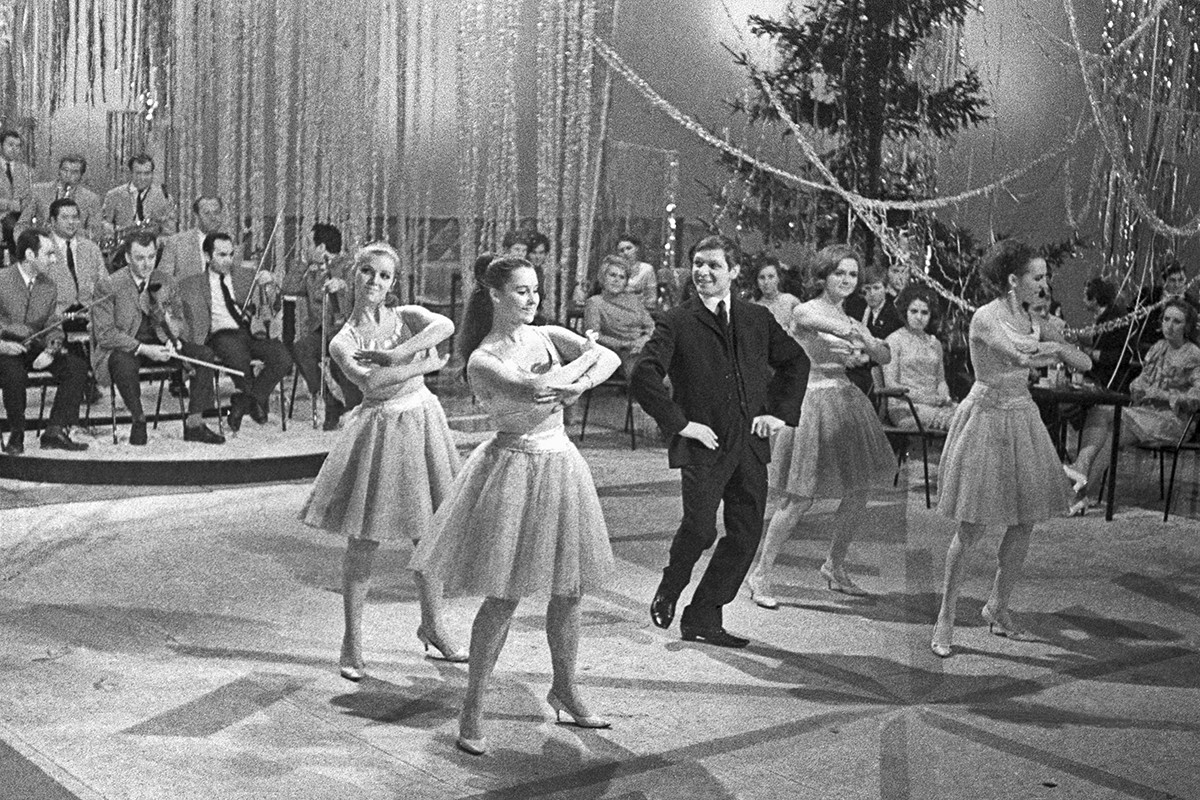 9. In the 1990s, Little Blue Light was temporarily discontinued and only returned to TV screens in 1998. During the Soviet era, performers sang only Russian-language songs, whereas in the modern-day reincarnation of the program, they gladly perform cover versions of ABBA songs or of Army of Lovers’s hit Sex Revolution, which would have been unthinkable in Soviet times. The show also no longer involved ordinary people, only celebrities. 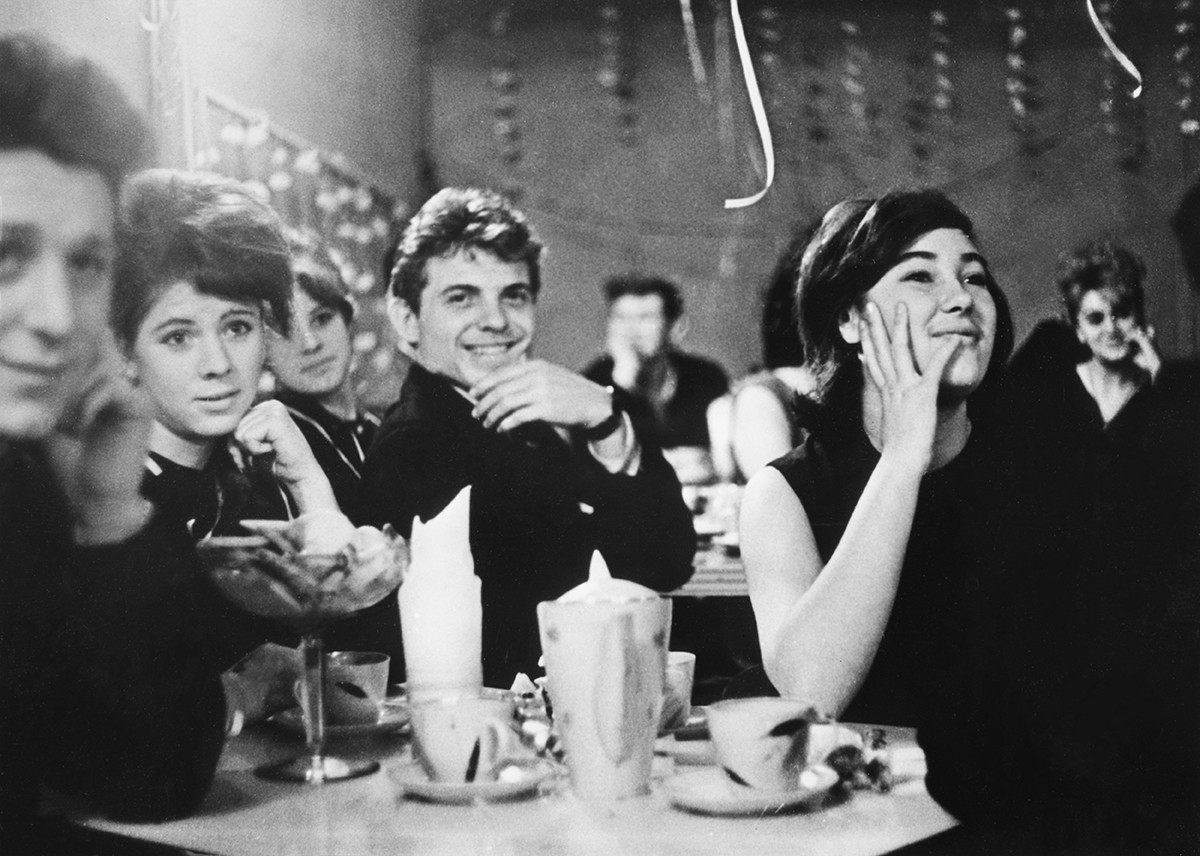 10. These days, there are several New Year programs on Russia's main national TV channels using the format of Little Blue Light: New Year’s Eve on Pervy, New Year Stars’ Parade on Rossiya 1, and New Year Little Blue Light. They usually draw a lot of criticism for their flat jokes and artificial atmosphere and for inviting the same performers every year, whom young people do not listen to.

In 2018, the presenter of the flagship Russian late-night show on Channel One, Ivan Urgant, came up with his own version of Little Blue Light, calling it Little Blue Urgant. The program featured appearances from performers popular with younger audiences: singers Monetochka, Ivan Dorn, Little Big, comedian Danila Poperechny, actress Irina Gorbacheva and many others. The show presented a funny and post-ironic interpretation of a Soviet TV classic. The audience liked the format and on New Year's Eve in 2019, Little Blue Urgant was back, much to viewers’ joy: it gathered over a million views on YouTube alone. 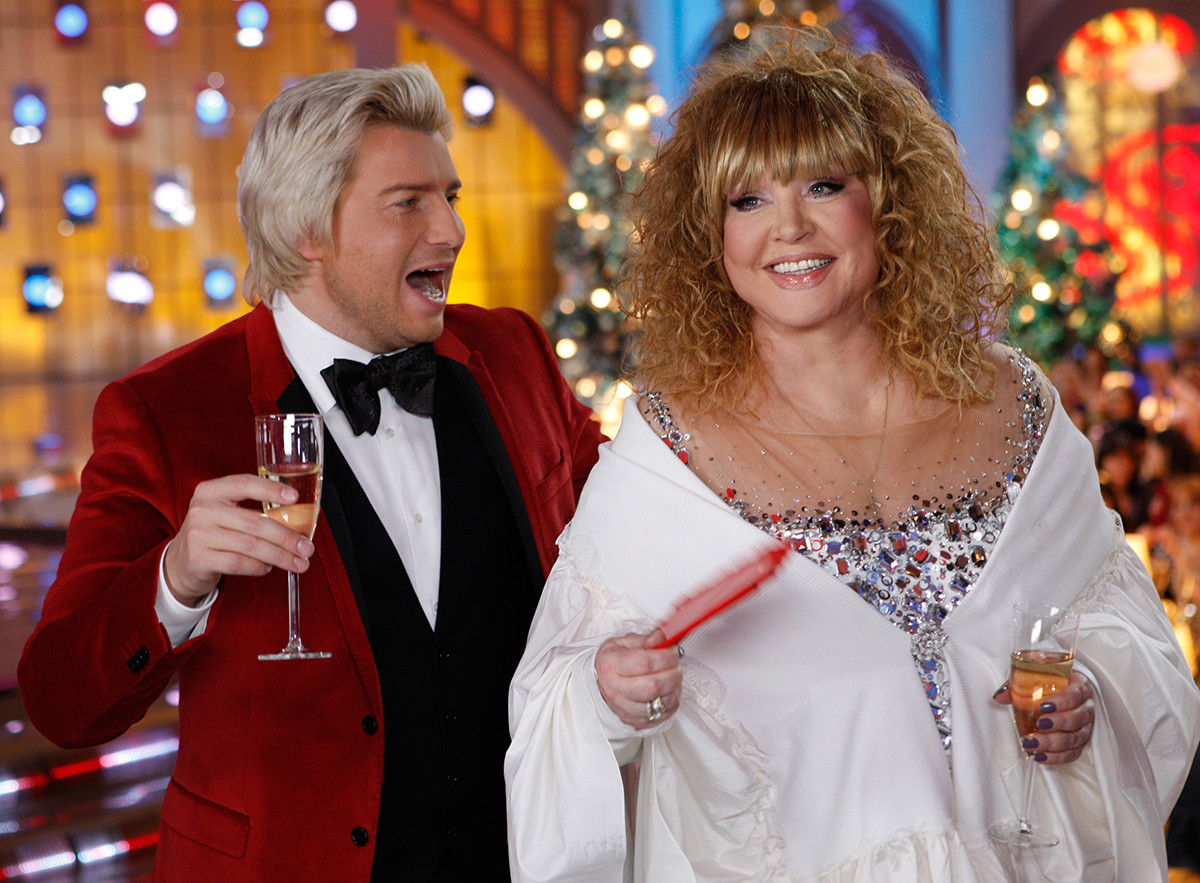 In November 2020, singer Valery Meladze called on his colleagues not to appear on New Year TV programs this year, in order to draw people’s attention to the problems experienced by the entertainment industry because of the pandemic, as so many performers had to cancel tours and concerts and lost their earnings because of the lockdowns.

"Perhaps then somebody will finally notice that there is a whole industry in which tens of thousands of people have been left without work for many months now,” Meladze said in a post on Instagram.

Nevertheless, Little Blue Light will be on Russian TV screens this New Year’s Eve, too. Furthermore, all performers and guests on it will not be wearing masks.