The State Kremlin Palace: An ambitious project in the heart of Russia 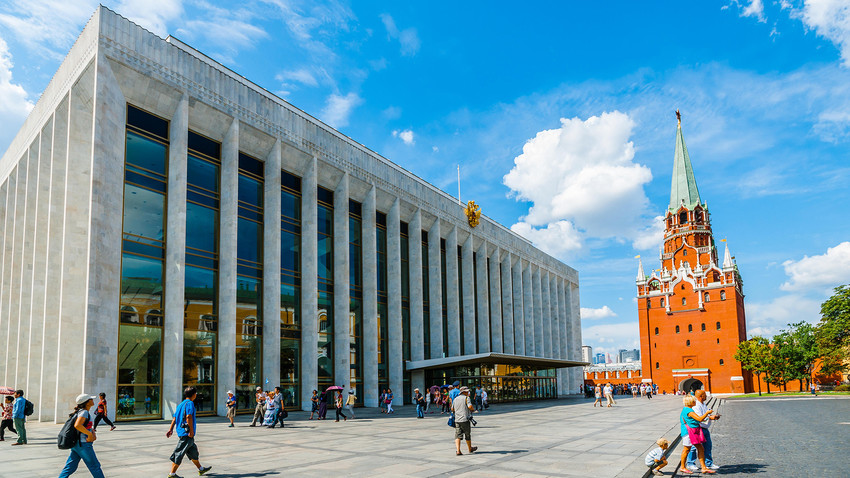 Legion Media
The history of the youngest building in the Kremlin that has held party congresses, kids’ celebrations and pop concerts.

The Communist Party of the Soviet Union had held its congresses in different locations. In tsarist times, it happened abroad. After the foundation of the USSR, the congresses were held in different places in Moscow; for example, in the Bolshoi Theater and in the Grand Kremlin Palace. 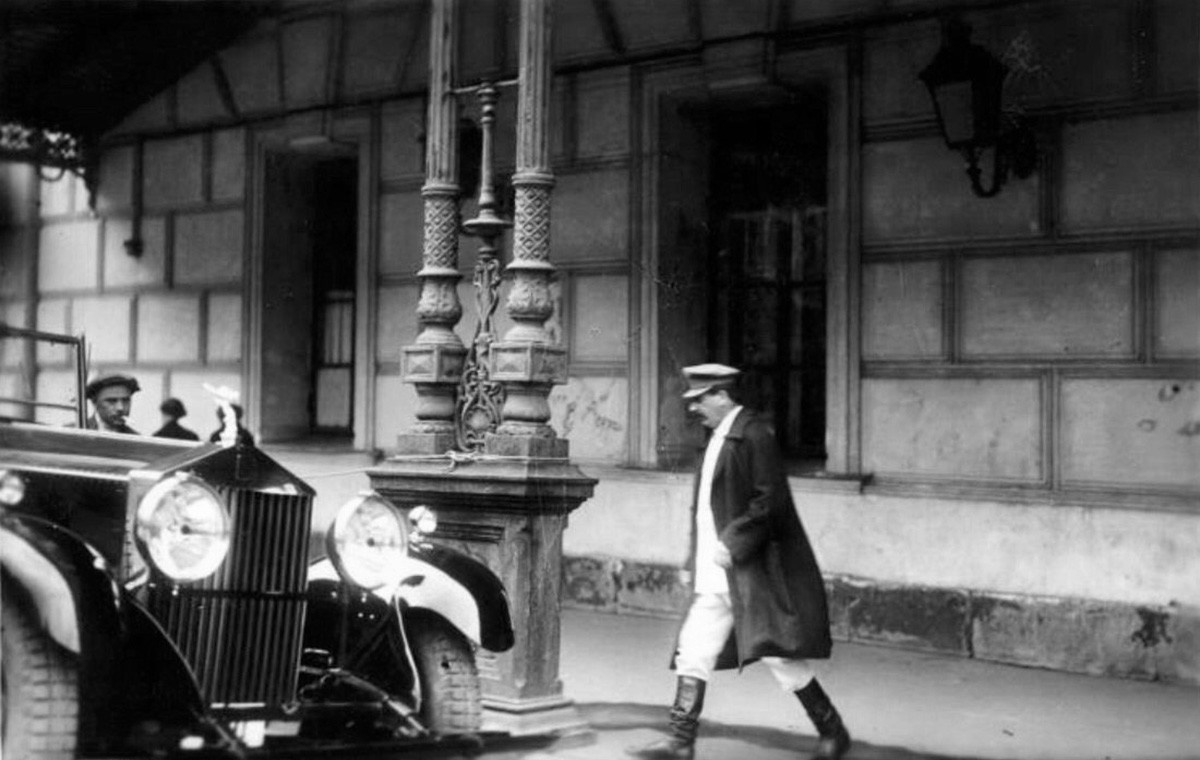 Joseph Stalin coming out of the Bolshoi Theater during the XVI congress.

Then, Nikita Khrushchev decided the party needed a special place for congresses in the Kremlin. He didn’t imagine it being especially large at first, but in 1959, the General Secretary visited China. Probably, it was there he was inspired by the huge Great Hall of the People that seated 10,000 in Beijing.

At the beginning of the project development, at least seven sites were considered, including on the Prechistenskaya Embankment where the reconstructed Cathedral of Christ the Saviour now stands once more, on Bolotny Island, at Vorobyovy Gory, in the VDNKh exhibition center and even at the site of the Gostiny Dvor hall across the Red Square from the Kremlin. Finally, in 1959, the Council of Ministers issued a decree to construct a building for party congresses within the Kremlin and Khrushchev signed off on it himself. The accurate location still wasn’t clear: initially, the Armoury Chamber building was meant to be used as the front, but the idea was soon discarded.

The final approved project was carried out by a big group of architects and engineers headed by Mikhail Posokhin, who was at the time the main architect of Moscow. They designed a huge building that needed a lot of space. The first idea was to build a hall for congresses seating 4,000 people, but after Khrushchev’s trip to China, the number rose to 6,000. The future hall was designed to be 120 meters long and 70 meters wide. The General Secretary had decided that it should be named not just a building, but the Palace of Congresses for its size.

The final location was chosen in the western part of the Kremlin. The site’s infrastructure was built in the 1810s, during the Kremlin reconstruction by architect Matvey Kazakov. For example, the former building of the Armoury Chamber of the Russian neoclassical style was turned into a caserne of the Kremlin garrison in the 19th century. It was a precious historical building, but it was torn down to clear the construction site. In total, 6 buildings were demolished and some of them were the survivors of the Fire of Moscow of 1812. 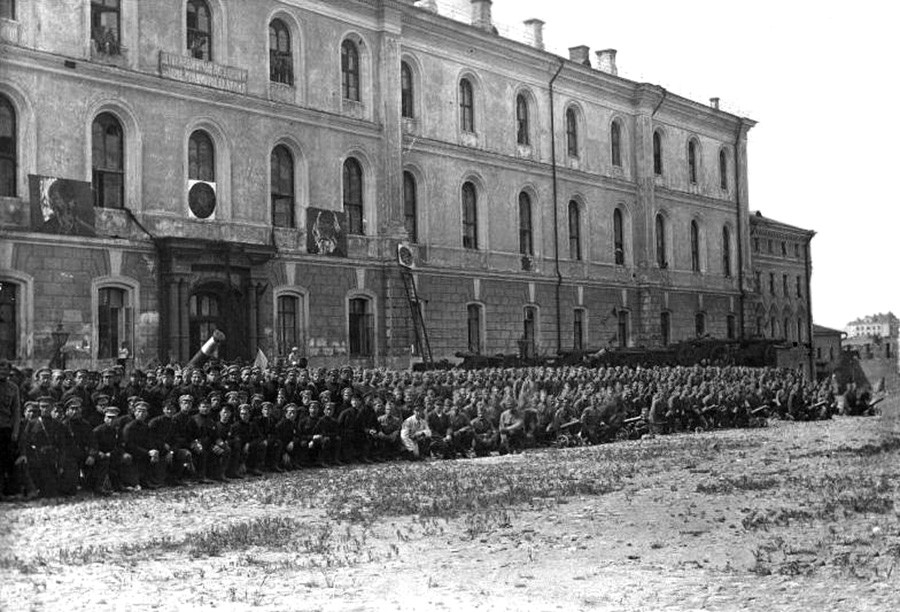 The caserne of the Kremlin garrison, 1920.

Archaeologists also found three underground passages between old palaces at the site. These secret ways were destroyed, too, as they became filled with earth. There were rumors of an old cemetery there, but it was never discovered.

And so, the Palace of Congresses had changed the Kremlin a lot even before being built. The panorama changes would be even more significant: the building was going to be very tall, even taller than the Troitskaya Tower that stood the closest. The architects had decided to deepen the building and the palace has a 15 meter underground part. However, after the construction was already started, Khrushchev came up with the idea of making a dining hall at the top of the building. Once it was completed, the Dormition Cathedral became “fenced in” by the palace and was no longer visible from Manezhnaya Street. 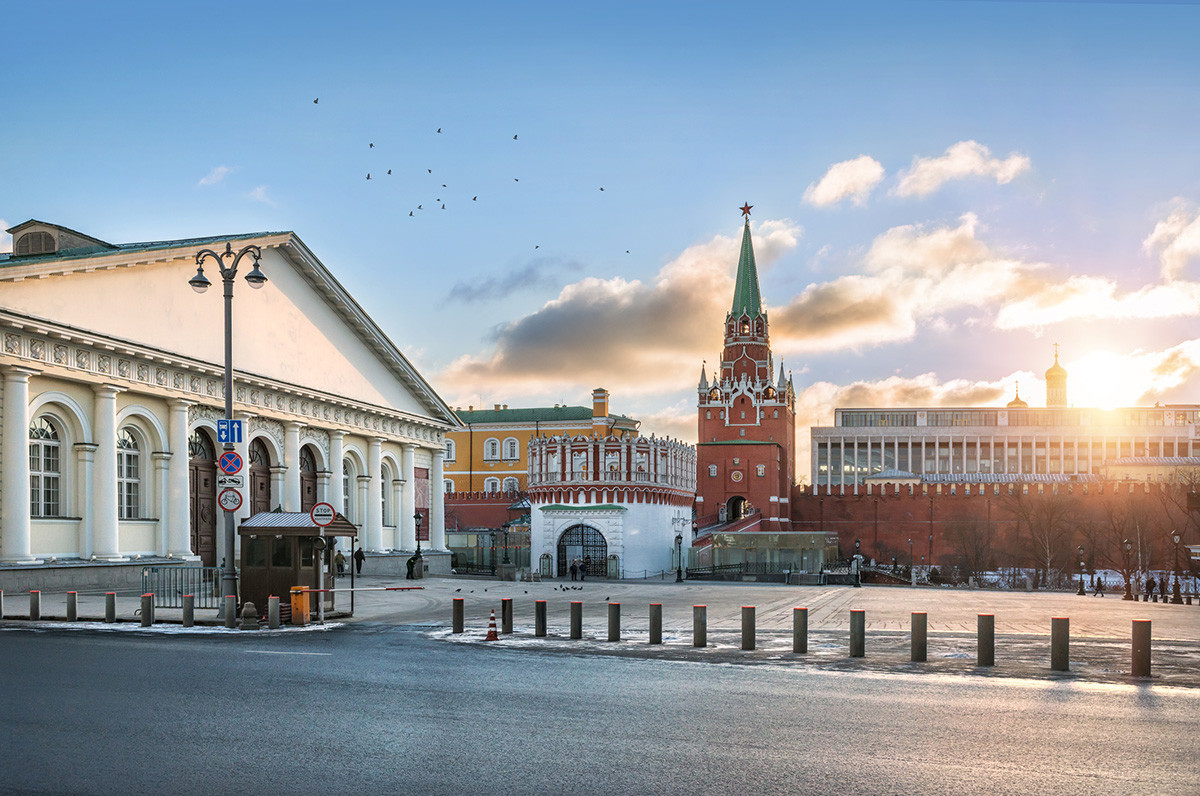 The Troitskaya Tower and the Palace of Congresses from Manezhnaya street.

The construction took 16 months. People from all over the USSR came to work on it. Also, it was considered important to inform the people about the progress. A special newspaper called ‘Udarnaya Stroyka’ (“High-powered Building”) was founded. The construction ended in summer 1961. 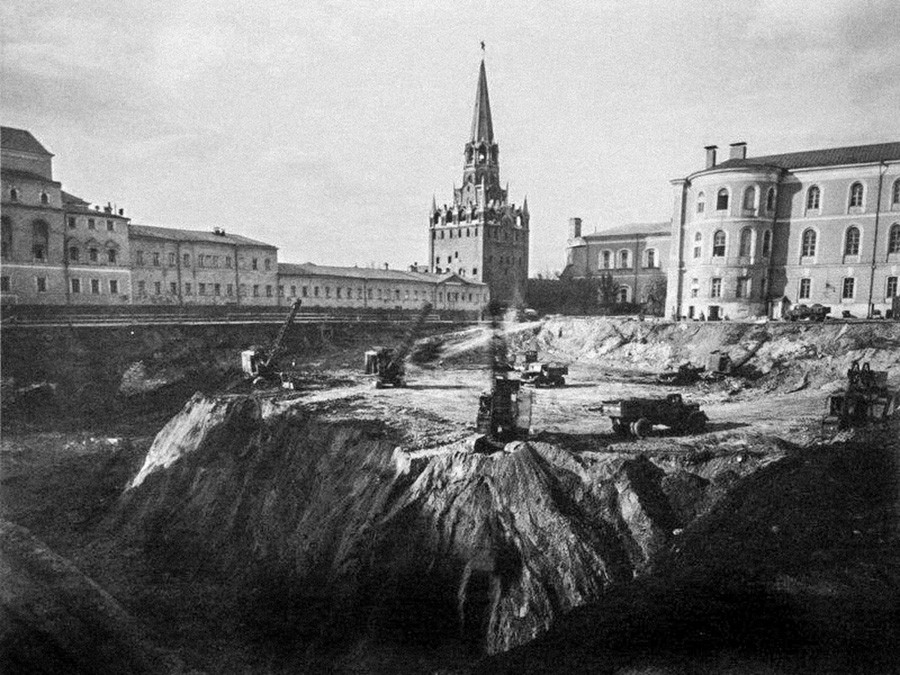 The construction of the Palace of Congresses.

The Palace of Congresses appears to be a building of modernist style that consists of concrete, glass and marble. There is a rhythmical alternation of marble-covered pylons and glass partitions. The glass mirrors the surrounding architectural monuments, but the palace still significantly discords with the ancient ensemble of the Kremlin. 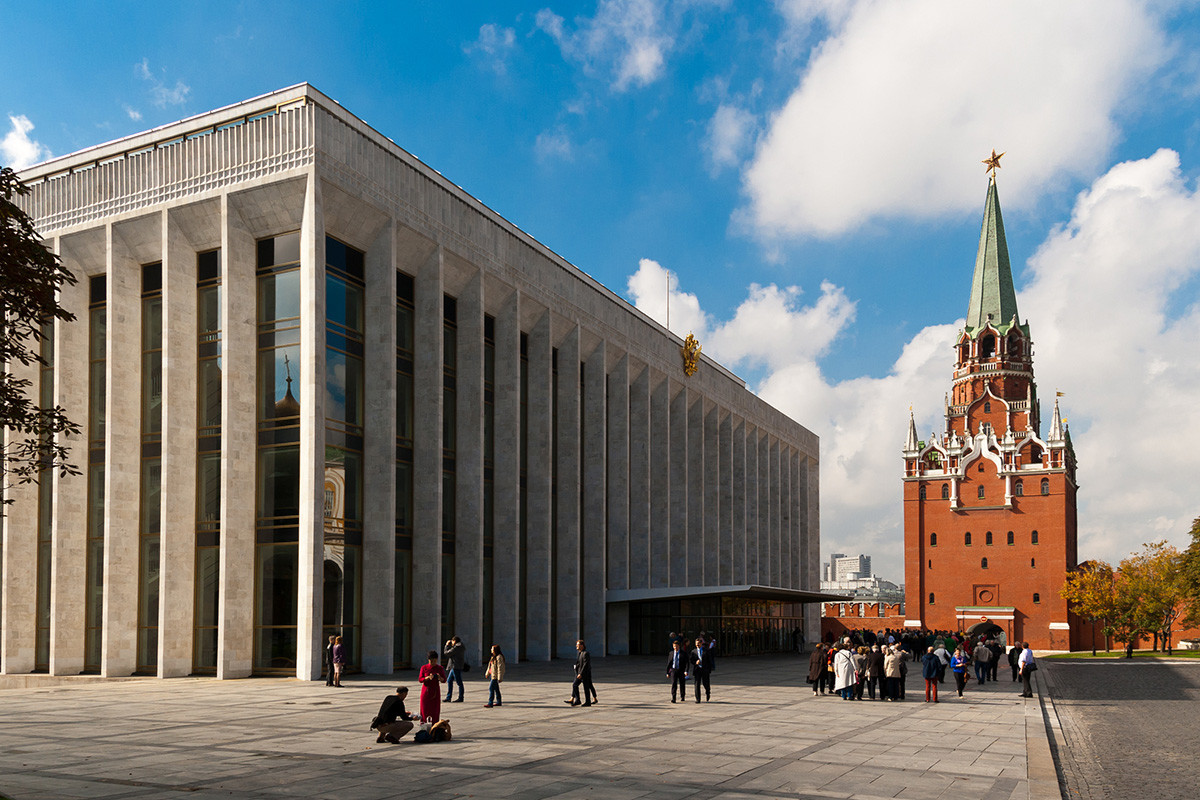 The main part of the palace inside is the hall seating, as planned, for 6,000 people. It’s specially designed for good acoustics: the form is practically a square, the walls are decorated with special laths that improve the sound. The parterre, the amphitheater and the upper circle are made as an integrated space. The stage is large enough to fit up to 1,000 artists at one time. There are many mechanisms for any needs. The second biggest room there is the Khrushchev-inspired dining hall located directly above. There also was once a way from the dining hall to an observation deck, but very soon the security service decided to close it for safety reasons. 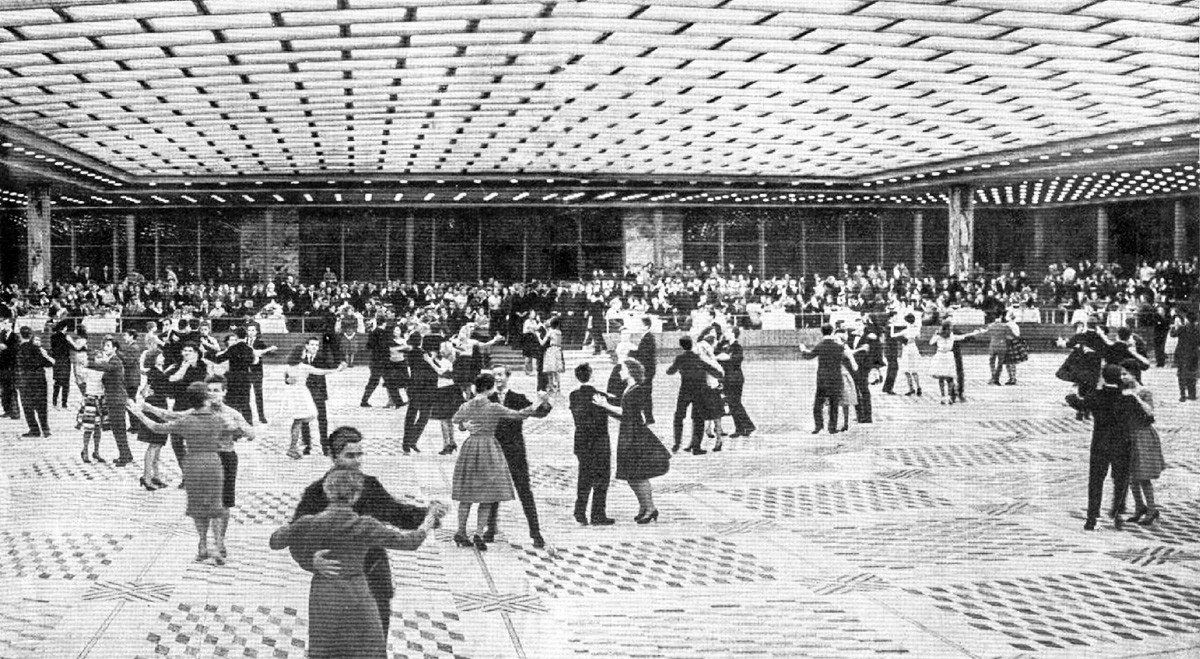 A ball in the dining hall.

The first concert in the palace took place on October 8, 1961. The spectators were the builders: they saw a performance by the artists of the Bolshoi Theater and the Pyatnitsky Russian Folk Chorus. Then they watched the movie ‘Khronika Plamennykh Let’ (“Chronicle of Flaming Years”). The official opening happened on October 17, when the XXII Congress of the Communist Party started. From then on, all its congresses were held there, including the final one, where the contradictions within the party became evident. 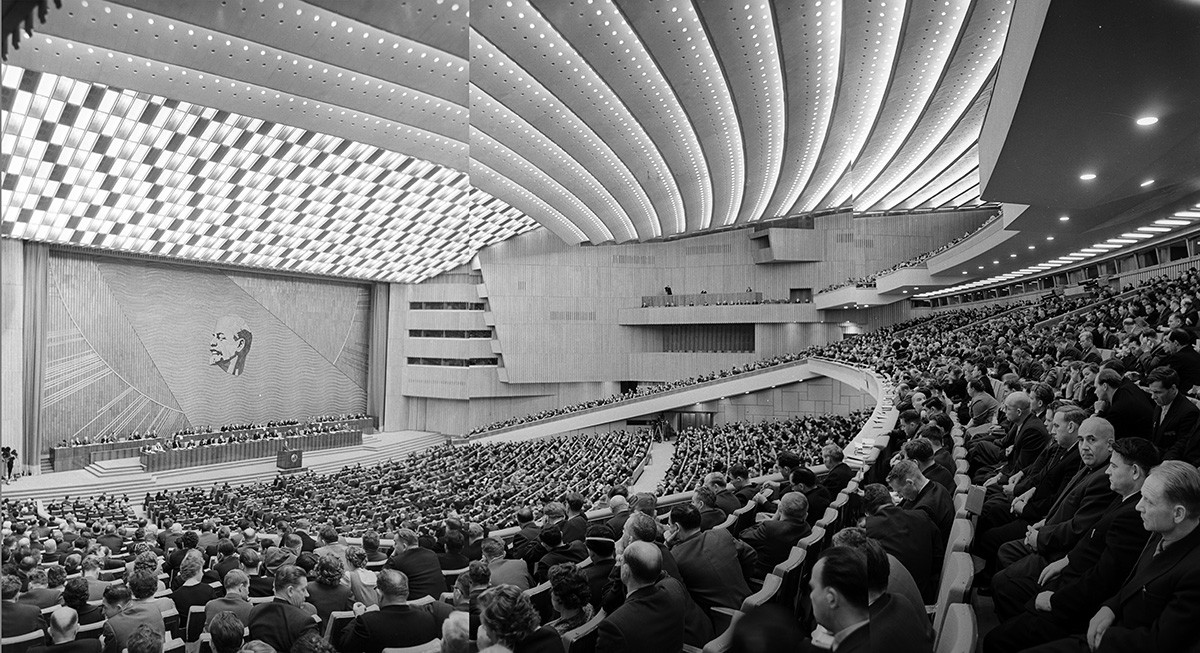 The XXII Communist party congress being held in the main hall.

From the very beginning, the Palace of Congresses was under the charge of the Bolshoi Theater, so it wasn’t just a place for political meetings. It was used for concerts and performances. Such ballet stars as Maya Plisetskaya and Māris Liepa danced there. World-famous opera singers like Galina Vishnevskaya and Elena Obraztsova performed on its stage. Children’s New Year parties were organized annually in this palace, too. In 1990, the ‘Kremlyovsky Balet’ (“The Ballet of the Kremlin”) theater was founded there. Now, the theater has worldwide acceptance.

Boris Yeltsin's inauguration as the first president of Russia took place there, too. The following year, he signed a decree to rename the Palace of Congresses into the State Kremlin Palace, but the old name is still well-known nowadays.

In 2001, Pyotr Shaboltay, a People’s Artist of Russia, became the head of the State Kremlin Palace. He started a total reconstruction of the building after 40 years of its service. The Palace itself was renewed, although all the decorations were kept the same as a historical monument. The Palace also got a new sound and light systems. 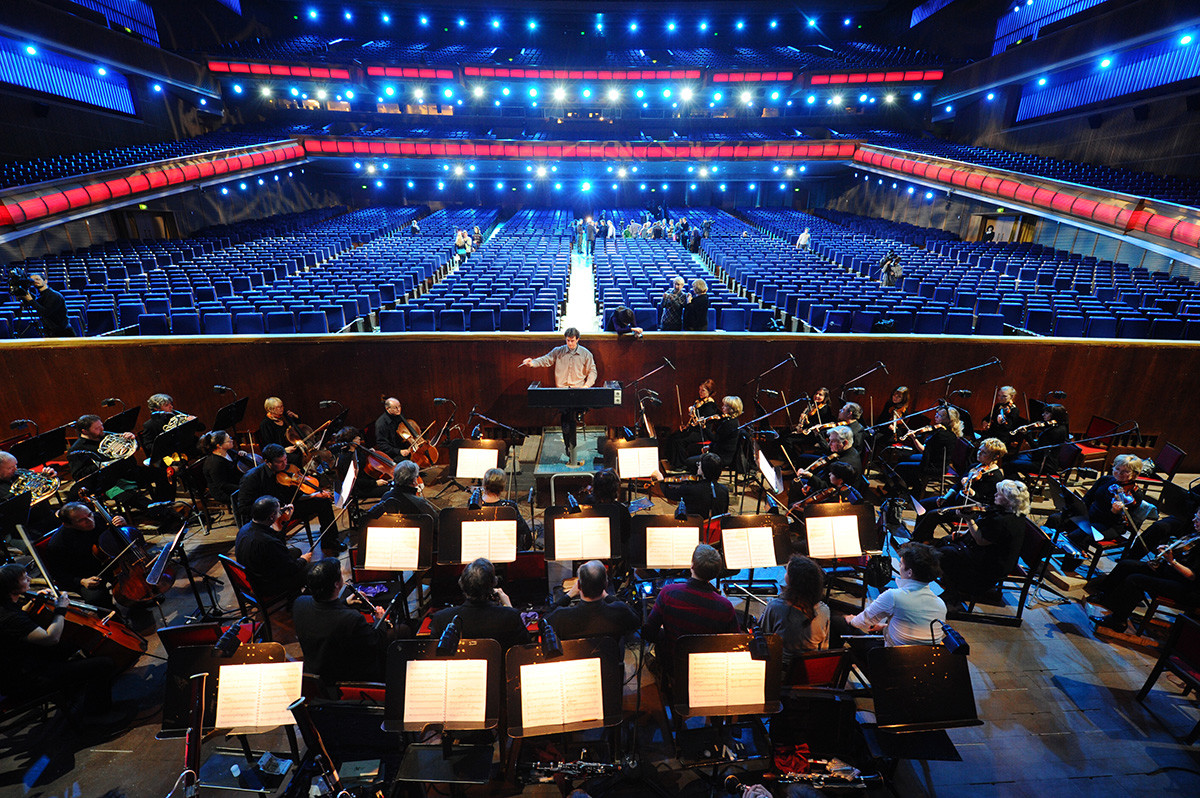 The main hall after the reconstruction.

Since 1961, the State Kremlin Palace has been one of the main concert venues of Russia, though not the biggest. Many popular Russian singers have had concerts there, but the Palace also attracts different world stars from abroad: Luciano Pavarotti, Eric Clapton, Chuck Berry, Elton John, Whitney Houston and Charles Aznavour (who admitted he loved the place), to name a few, have performed there at different times.