How Soviet poets performed in football stadiums in front of thousands 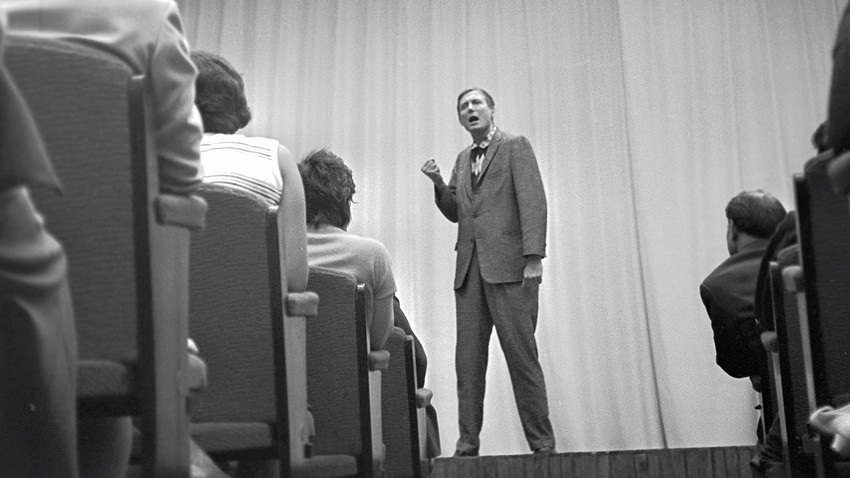 Dmitry Donskoy/Sputnik
“A poet in Russia is more than a poet,” Yevgeny Yevtushenko, a leading author of his time, famously stated. He knew what he was talking about. During Nikita Khrushchev’s cultural years of Thaw, Soviet poets were public figures like rock stars. They performed to sell-out crowds, predicted the future and helped get over the past.

Soviet poets were rewarded with public recognition for what they did best – inspire hope and change in the USSR. They rocked in their own, intellectual way.

Poets of the Thaw 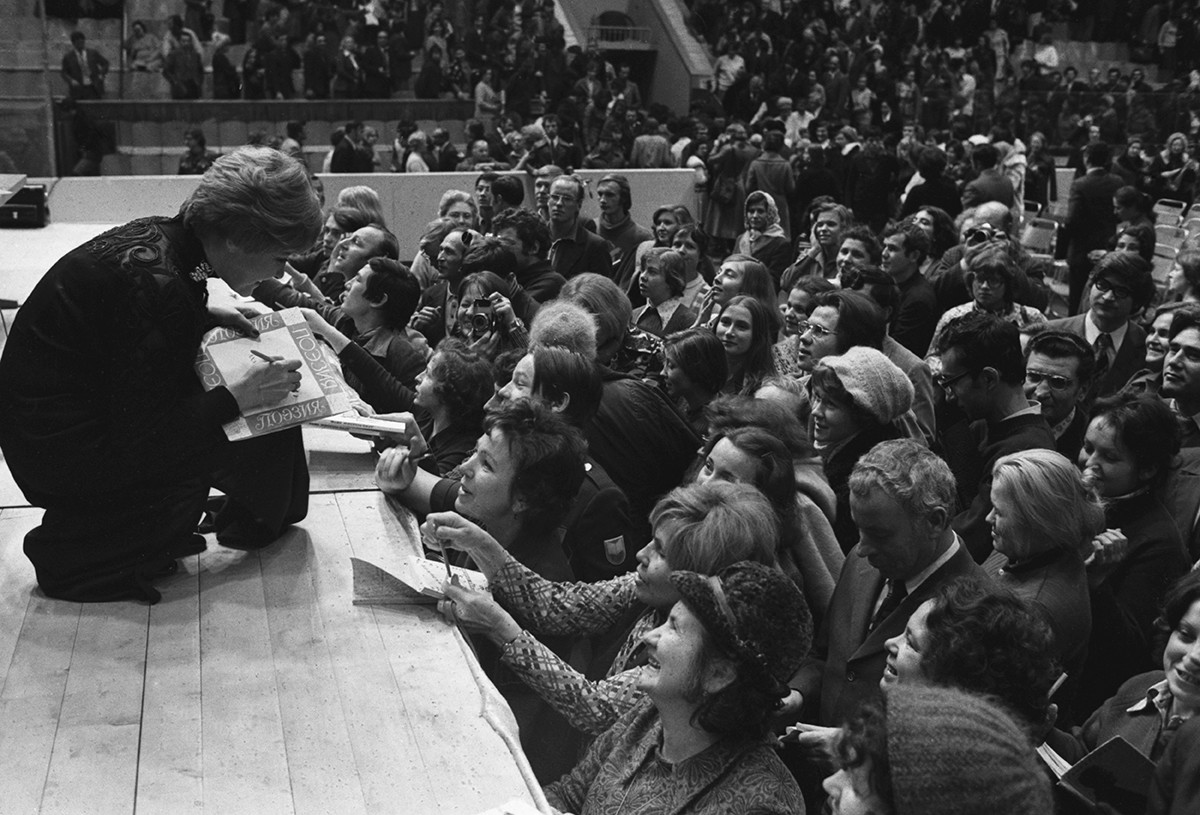 Soviet poets were quasi human rights activists back in the day.

In the late 1950s-1960s, poetry was extremely popular among the Soviet youth. Khrushchev’s Thaw brought a breath of fresh air after Stalin’s totalitarian rule. Poetry readings were a rare ray of light in a close Soviet environment, behind the stuffy Iron Curtain. It was an unprecedented time marked by big promises and high hopes that replaced the horrors of WWII and early communism. The generation that came of age in the early 1960s was looking for new challenges, new opportunities - and new raisons d’etre.

Things began to change in the late 1950s, after Nikita Khrushchev delivered his secret speech to the 20th congress of the Communist Party (in which he slammed Stalin’s crimes and the cult of personality). 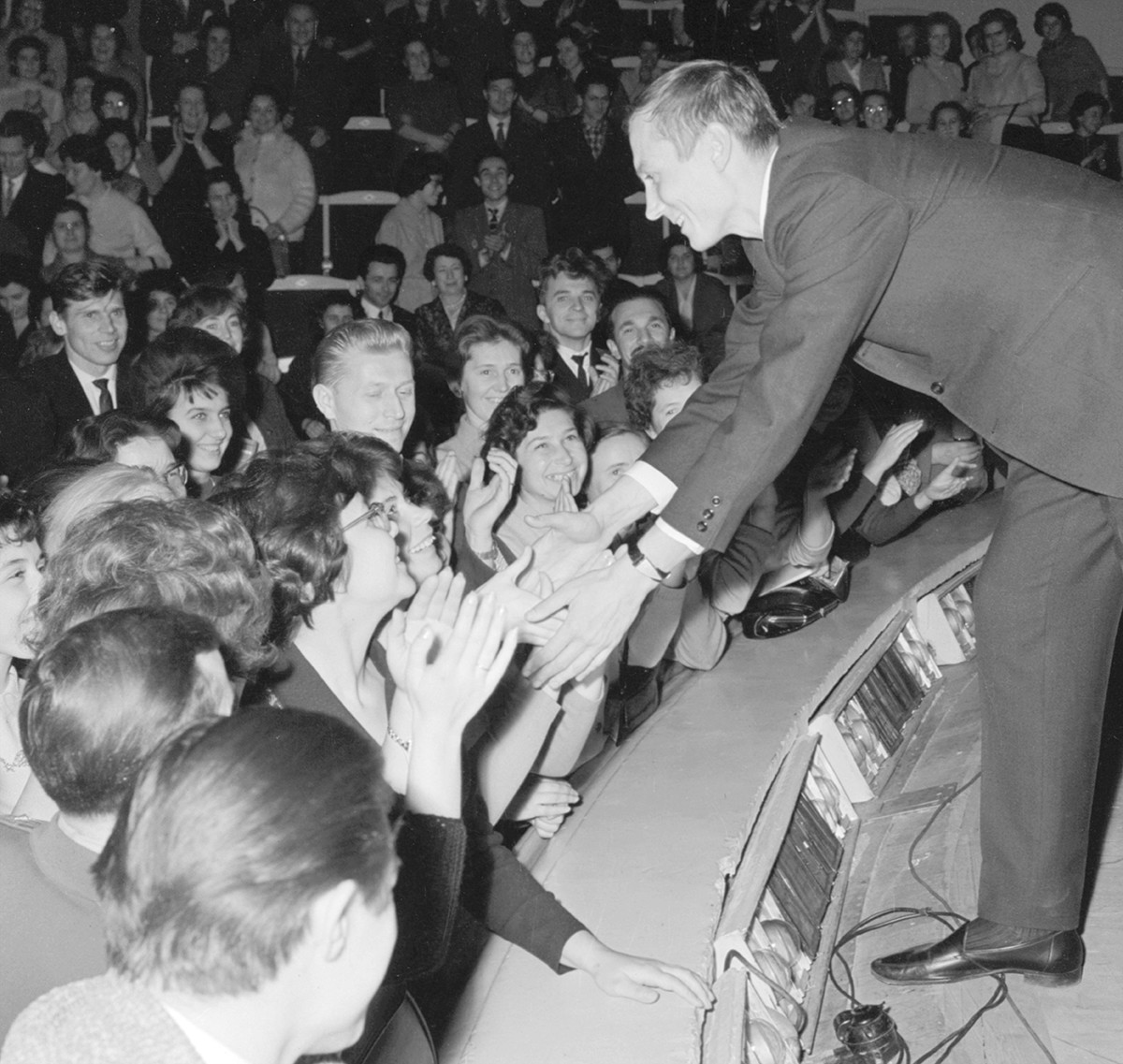 In the late 1950s-1960s, poetry was extremely popular among the Soviet youth.

Poetry, like any form of art, became a powerful form of expression for both artists and listeners. Their collections of poems sold several million copies. “The new kids on the block” were so popular they drew large crowds of admirers that gathered inside packed football stadiums.

Yevgeny Yevtushenko (1933-2017) achieved an almost godlike status among the poets and became the leading figure of the so-called ‘Sixties Generation’ in the Soviet Union. 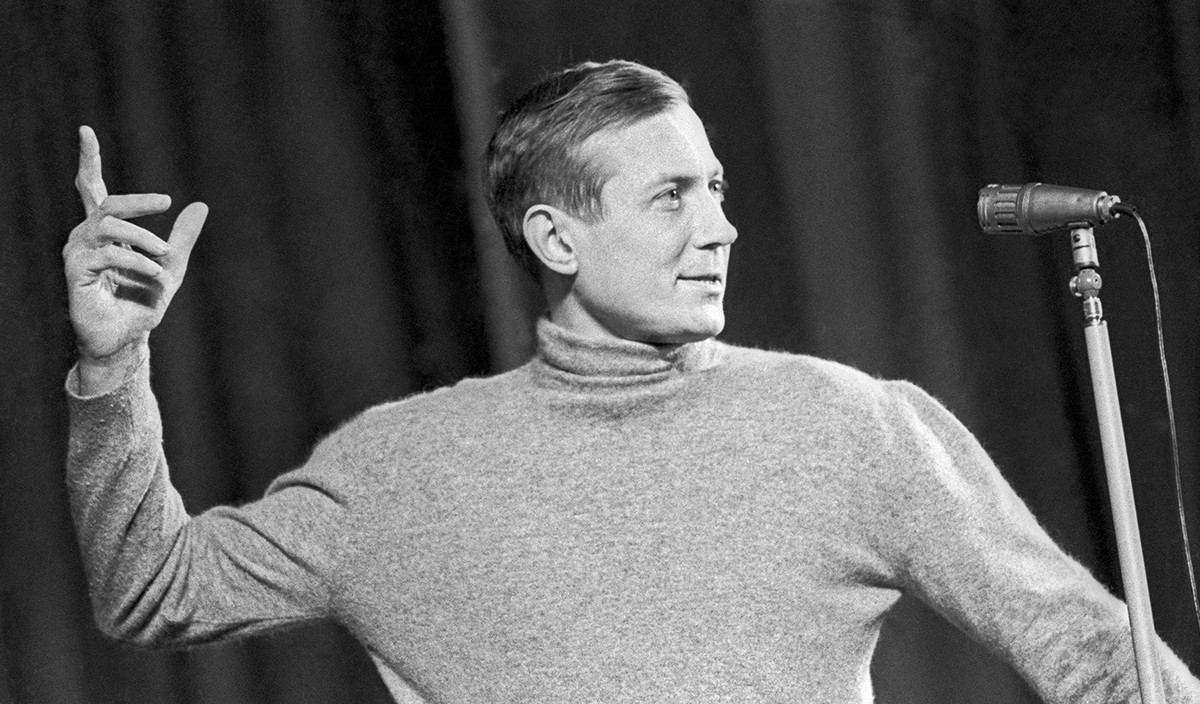 Yevgeny Yevtushenko achieved an almost godlike status among the poets.

He made waves in 1961 when his poem, ‘Babi Yar’, saw the light of day. Based on one of the worst massacres in WWII - the Nazi massacre of Jews in Kyiv - the poem was translated into 72 languages, making Yevtushenko world-famous. Yevtushenko’s poem inspired Dmitri Shostakovich to create his ‘Thirteenth Symphony’.

The poem was Yevtushenko’s vocal protest against state-sponsored anti-semitism and the Soviet Union’s refusal to pay homage to thousands of victims of the mass Babi Yar, mainly Jews, as well as Soviet prisoners of war, Communists and Gypsies. More than 33,000 Jews were murdered at Babi Yar, a ravine in Kiev, on September 29 and 30, 1941.

No monument stands over Babi Yar.

A drop sheer as a crude gravestone.

Today I am as old in years as all the Jewish people.

Now I seem to be a Jew

Yevtushenko confessed in his groundbreaking poem.

In my blood there is no Jewish blood.

In their callous rage, all antisemites must hate me now as a Jew.

For that reason I am a true Russian!

His highly emotional appeal reached beyond his native country. 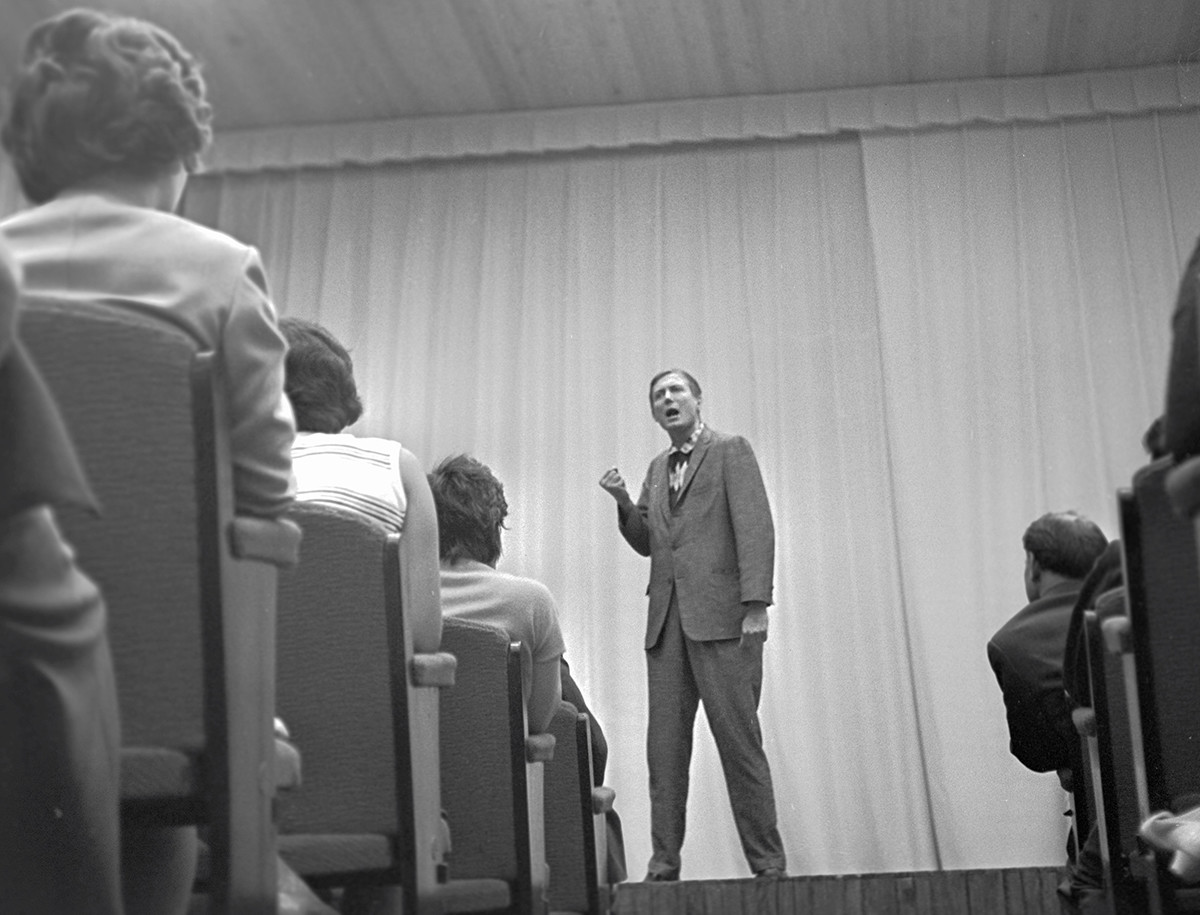 Yevtushenko made waves in 1961 when his poem, ‘Babi Yar’, saw the light of day.

Poetry was, among other things, a form of political protest and outspoken criticism for Yevtushenko and those like him.

Eyebrows were raised when the young poet published his next risky work. ‘The Heirs Of Stalin’ depicted the haunting shadow of the dictator that, according to Yevtushenko, was still lingering over the Soviet Union.

It feels like there’s a telephone in the coffin.

Stalin gives his instructions to someone again.

The poem came out in the Soviet daily newspaper Pravda in 1962. People read it, unable to believe their eyes! It was repeated over and over again by thousands, eventually becoming more like an anthem of freedom. 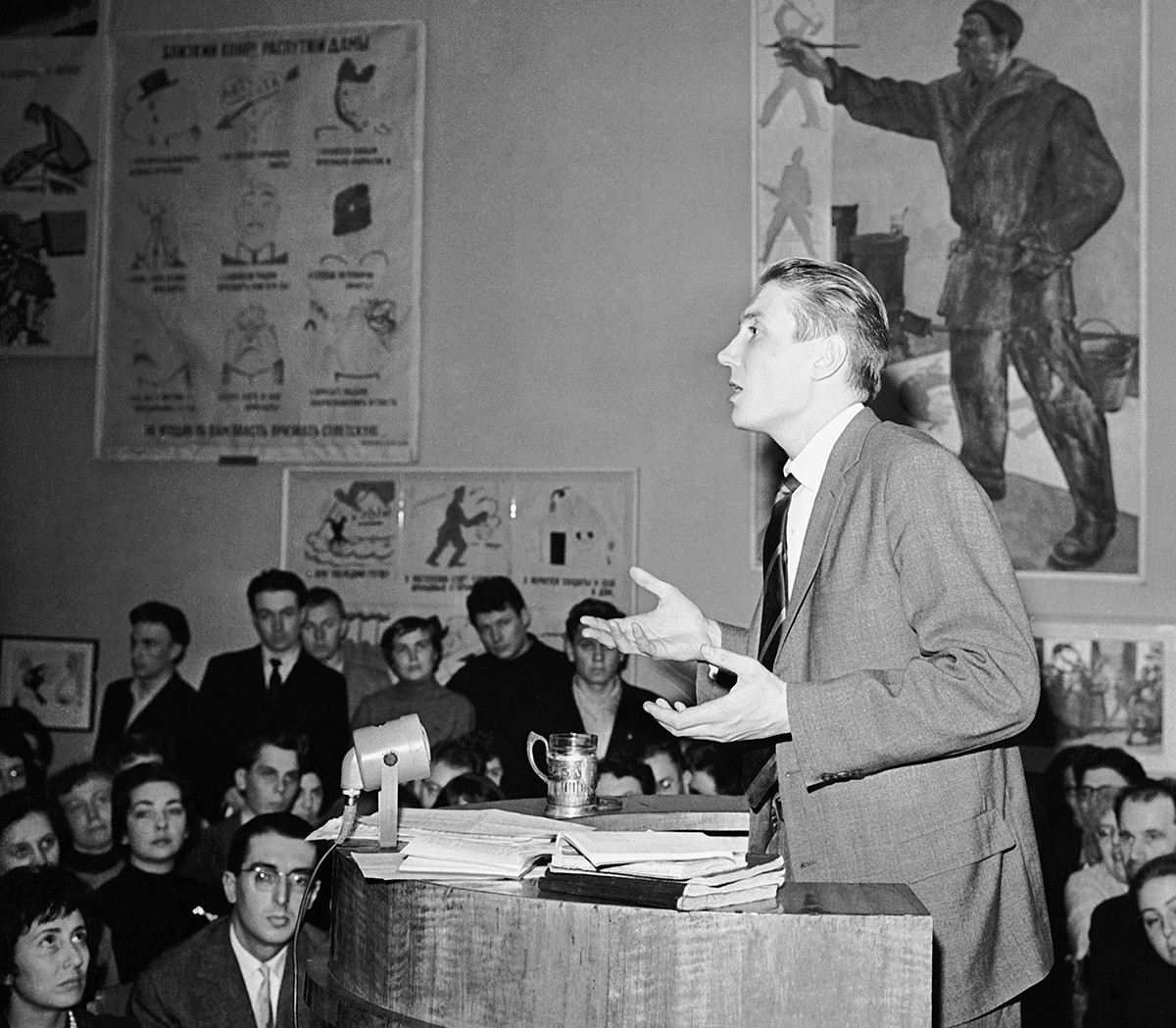 Yevtushenko skillfully used allegorical language to say what he wanted.

Yevtushenko was an influencer and a true superstar. Crowds came to listen to Yevtushenko read his poems live for one simple reason. His words came from the heart (during the time of state censorship, Yevtushenko skillfully used allegorical language to say what he wanted). He was convincing and charismatic. At the height of his popularity, Yevtushenko attracted adoring crowds of tens of thousands that gathered inside packed football stadiums.

He wasn’t the only eloquent poet out there, but the only one to gain recognition overseas. Yevtushenko had a chance to meet the 37th President of the United States, Richard Nixon, while Pablo Picasso and Marc Chagall gave the Soviet poet their paintings as gifts. In 1963, Yevtushenko was nominated for the Nobel Prize for Literature.

In the sixties, poetry clearly had a therapeutic dimension in the Soviet Union. Robert Rozhdestvensky (1932-1994) was one of the most powerful and influential Russian poets of his generation. 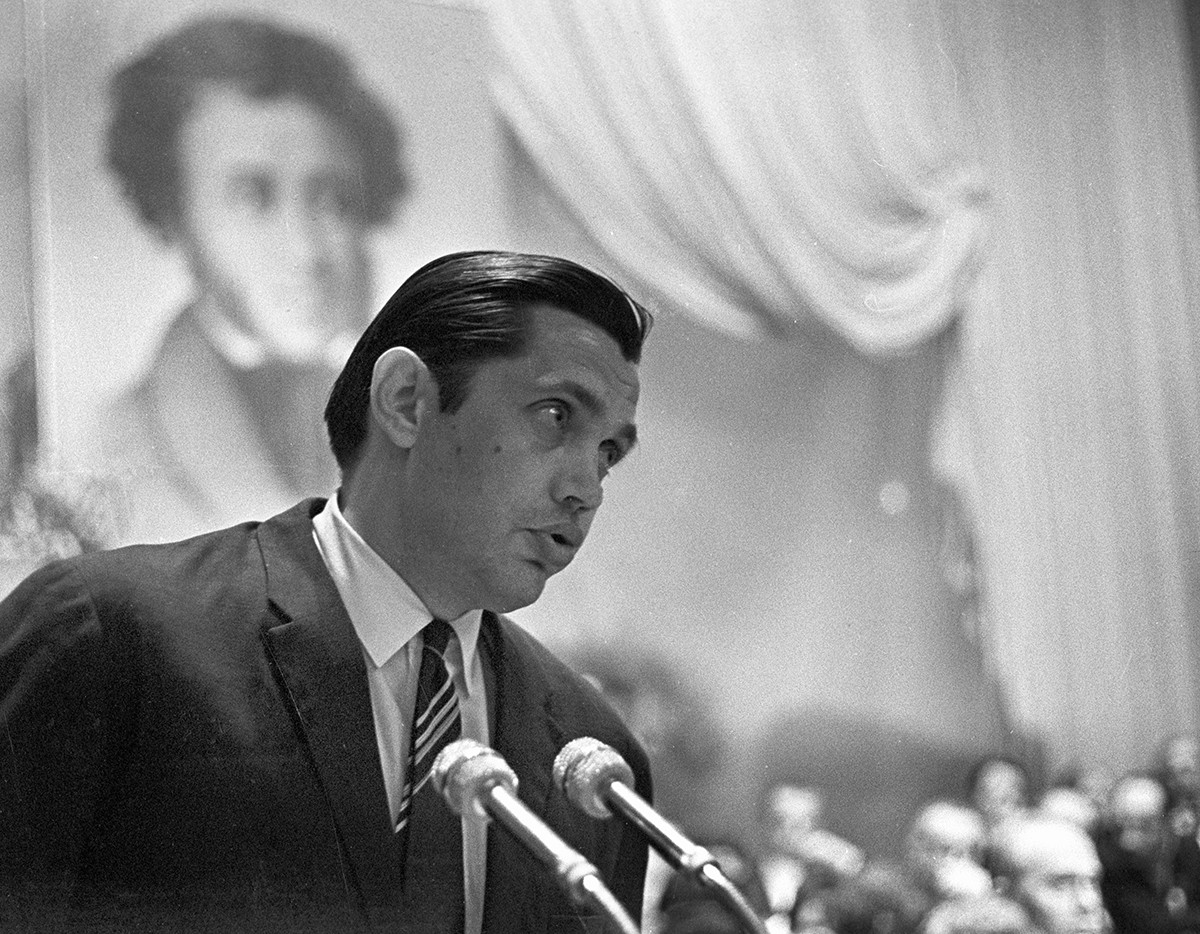 Many of his poems were set to music, becoming popular songs. His best-known collection of poems titled ‘Requiem’ was dedicated to those who died in WWII.

As long as your hearts are beating -

What price was paid 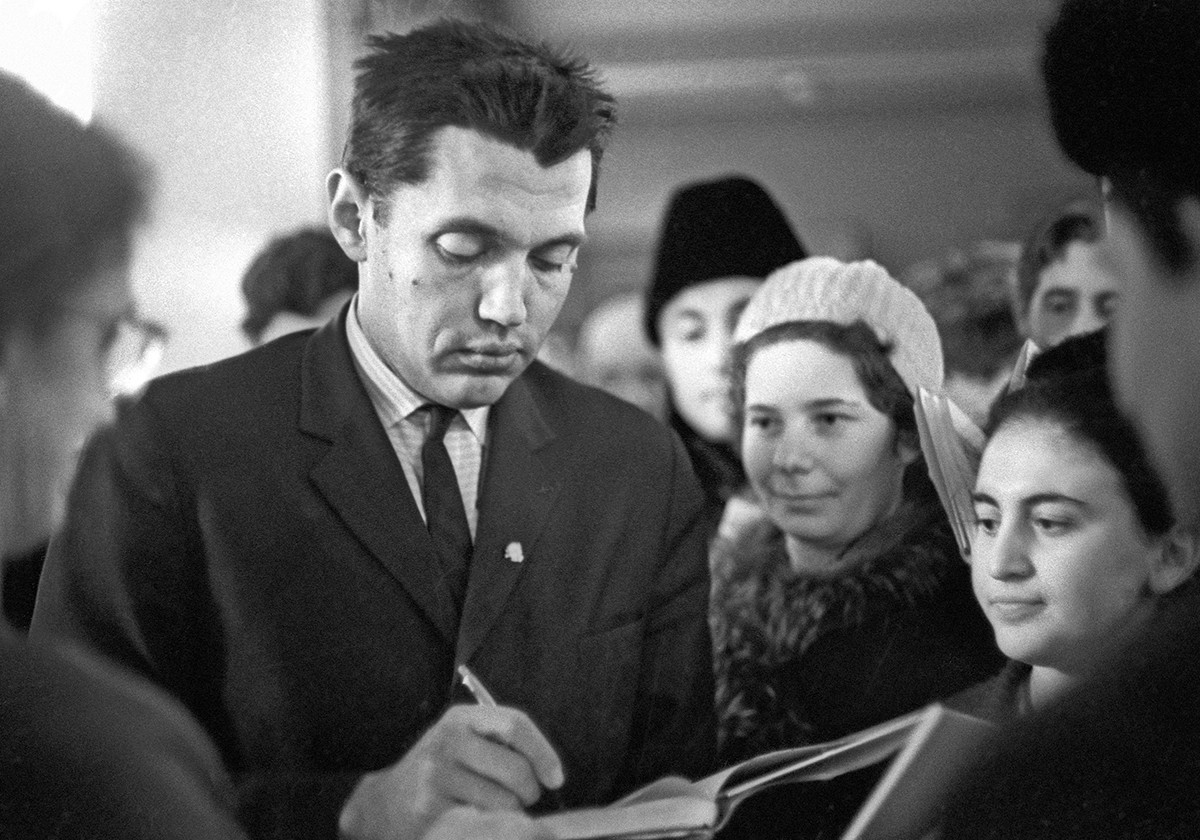 Like his peers, Rozhdestvensky gave mass poetry readings. He dreamed big, had undeniable talent and charisma, with thousands of fans flocking to the Luzhniki football stadium in Moscow to listen to the author of ‘Requiem’.

Poets were the new movers and shakers, whose dreams and ideas resonated with the post-war generation.

His best-known collection of poems titled ‘Requiem’ was dedicated to those who died in WWII.

Poetic evenings at Moscow’s Polytech, where Robert Rozhdestvensky shared the stage with Yevgeny Yevtushenko, Bella Akhmadulina, Andrei Voznesensky and Bulat Okudzhava, became the symbol of the Thaw, with its long-awaited freedom of speech and expression. Marlen Khutsiev showed these up-and-coming Soviet poets in his landmark movie, ‘Ilych’s Gate’ (1962). All were part of a group that gave public readings next to Vladimir Mayakovsky’s monument in Moscow. Their poems were meant to be read aloud. 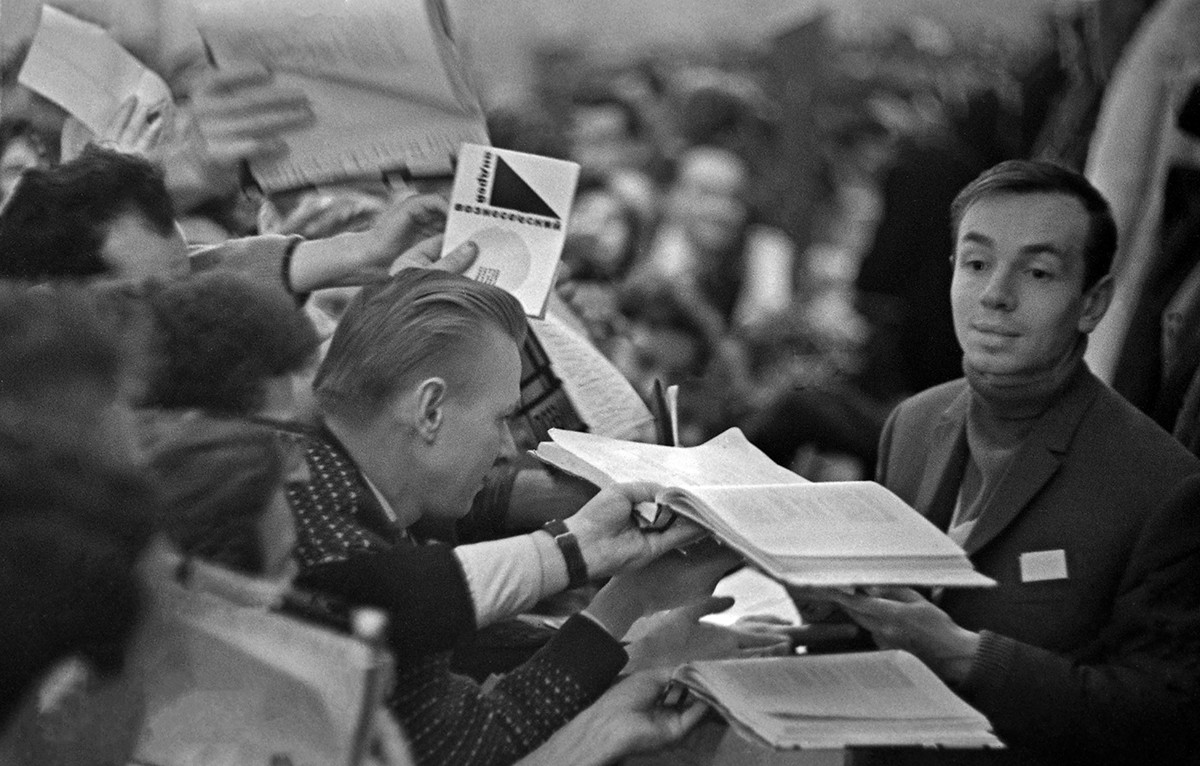 Andrei Voznesensky's poems were both deeply personal, innovative and provocative.

Andrei Voznesensky (1933-2010) was one of the most unorthodox Soviet poets whose public readings filled soccer stadiums. His poems were both deeply personal, innovative and provocative. In 1963, Khrushchev (who hated avant-garde art) gave the 30-year-old poet a public tongue-lashing. “Just look at this new Pasternak!” Khrushchev exclaimed, telling Voznesensky to take his passport and “get out”. Luckily, this never happened. 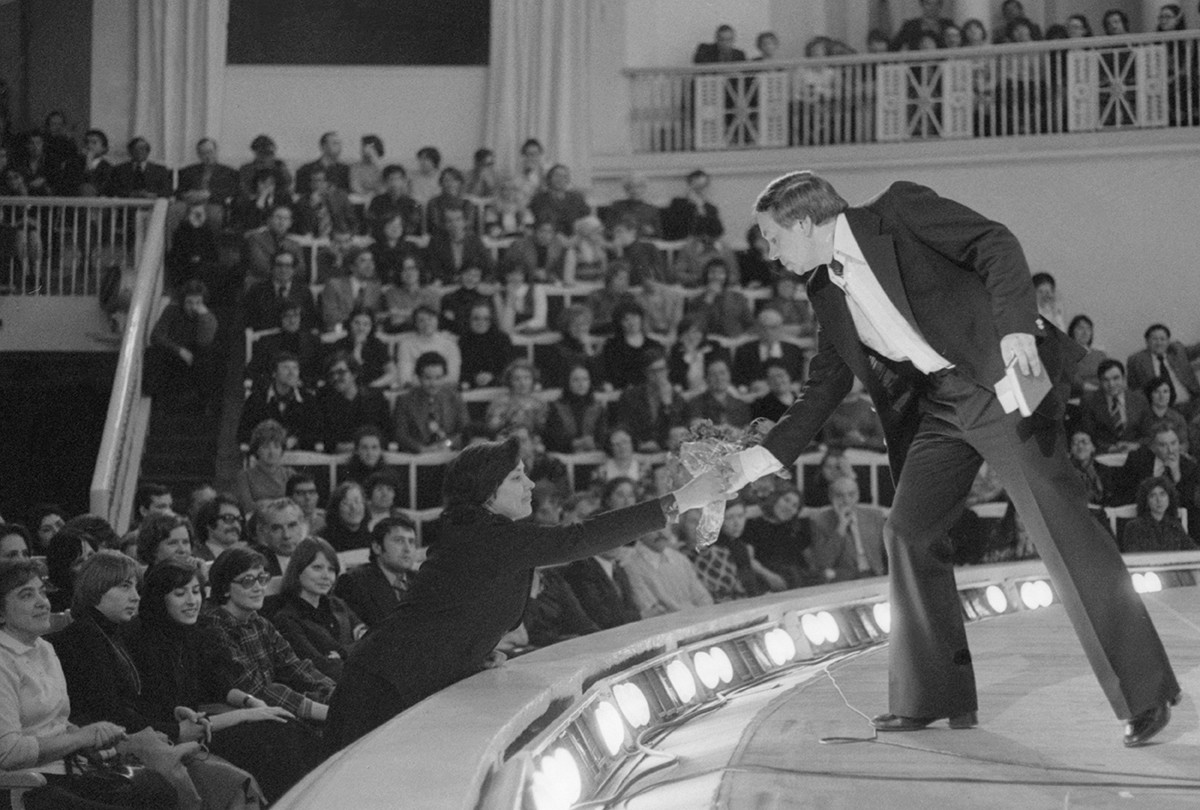 Andrei Voznesensky was one of the most unorthodox Soviet poets.

During the 1960s, Voznesensky was allowed to travel to Europe and the United States. None other than U.S. senator Robert F. Kennedy translated some of Voznesensky’s poems, while the Soviet poet dedicated his works to one of the greatest style icons of the 20th century (and U.S. first lady) Jackie Kennedy.

Bella Akhmadulina (whom Joseph Brodsky described as an heiress to the Lermontov-Pasternak tradition in Russian poetry) and Andrei Voznesensky (hailed by Robert Lowell as “one of the greatest living poets in any language”) also drew crowds of young admirers.

Yevtushenko’s first wife Bella Akhmadulina (1937-2010) was the only woman in the ‘The Fab Four’ group. 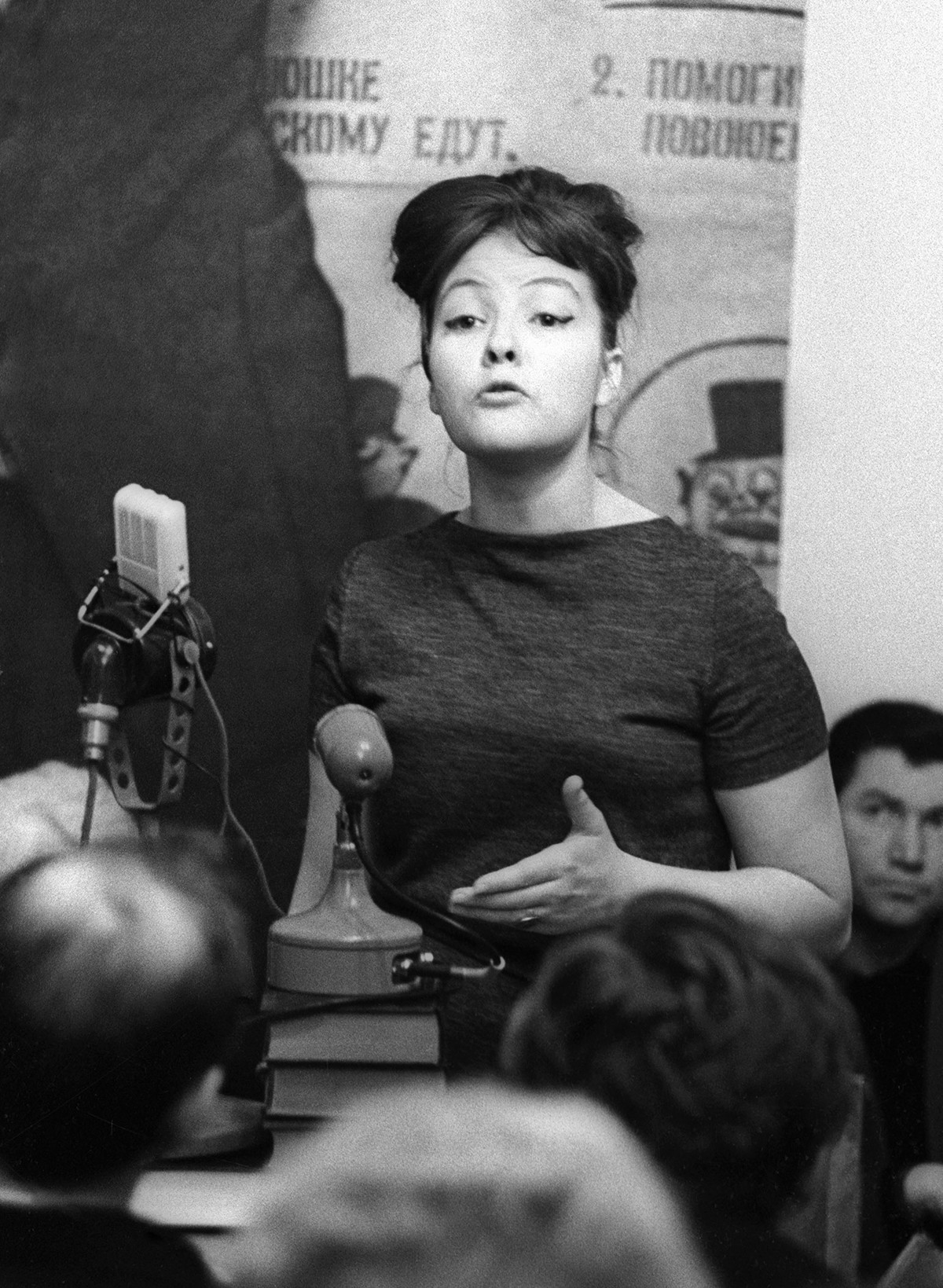 Joseph Brodsky described Akhmadulina as an heiress to the Lermontov-Pasternak tradition in Russian poetry.

Charming, sensual and unfussy, she illuminated the crowd with her heartfelt love poems and her inimitable voice. Her books of poems included ‘Fever’,’ ‘The Candle’,’ ‘The Secret’ and many others.

READ MORE: Why Bella Akhmadulina was so beloved in the USSR

While her poems were apolitical, Bella always lent a helping hand to those who were facing persecution. She published an open letter in support of dissident physicist Andrei Sakharov, when he was sent into exile by Soviet authorities. 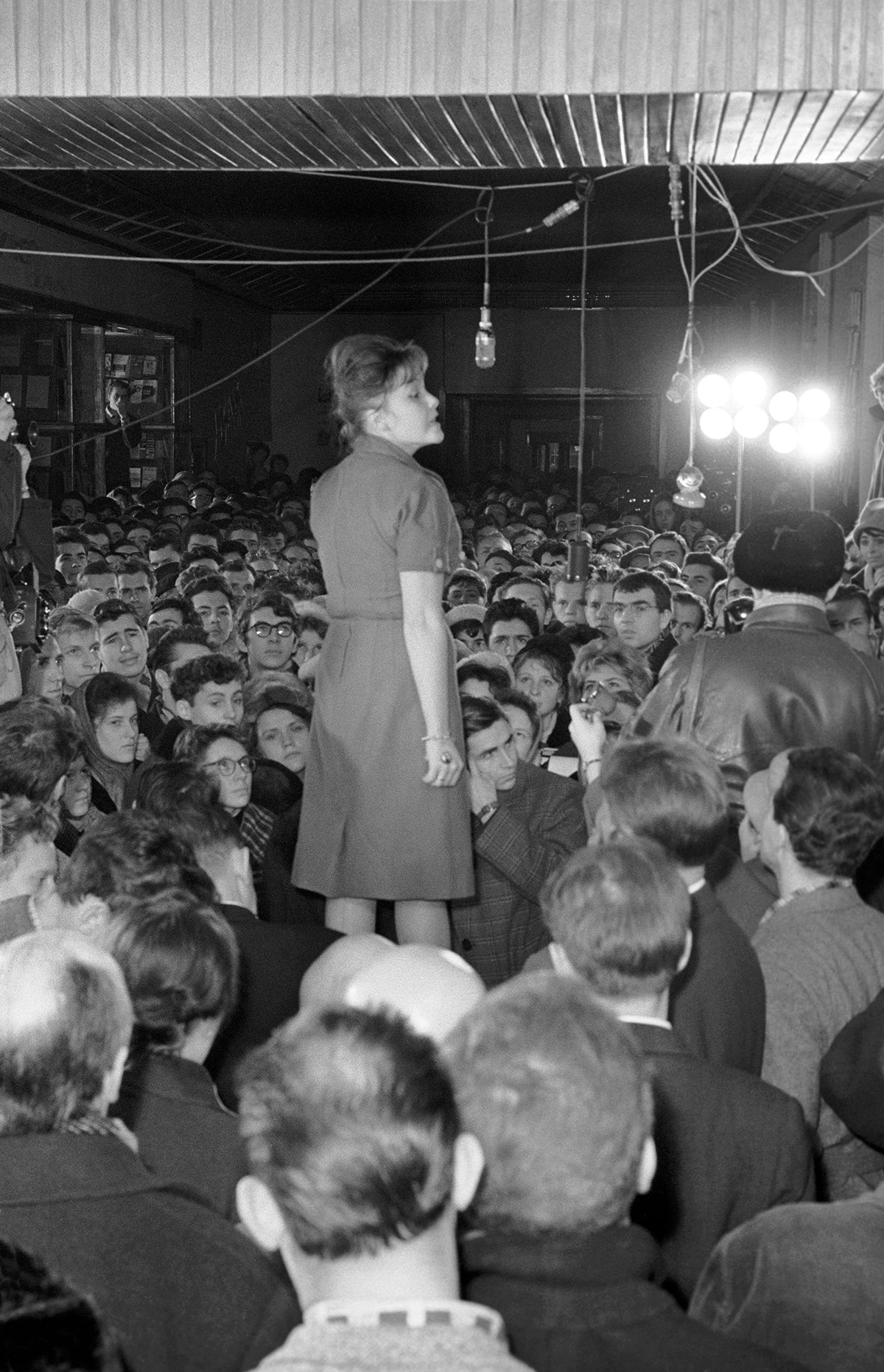 While her poems were apolitical, Bella always lent a helping hand to those who were facing persecution.

In fact, Soviet poets were quasi human rights activists back in the day. As unbelievable as it sounds, thousands of people came to sports stadiums for poetry readings, because they wanted to hear a voice of truth. Poetry flourished in the Soviet Union in the 1960s. It provided moral uplift to millions of people, giving them stamina, courage and hope (even though most of those hopes eventually proved hollow). Although Khrushchev criticized Stalin, in the long run, Stalinism happened to be the only method of rule he was familiar with. But that’s a whole other story.