Why was reading in the bathroom so widespread in the USSR? 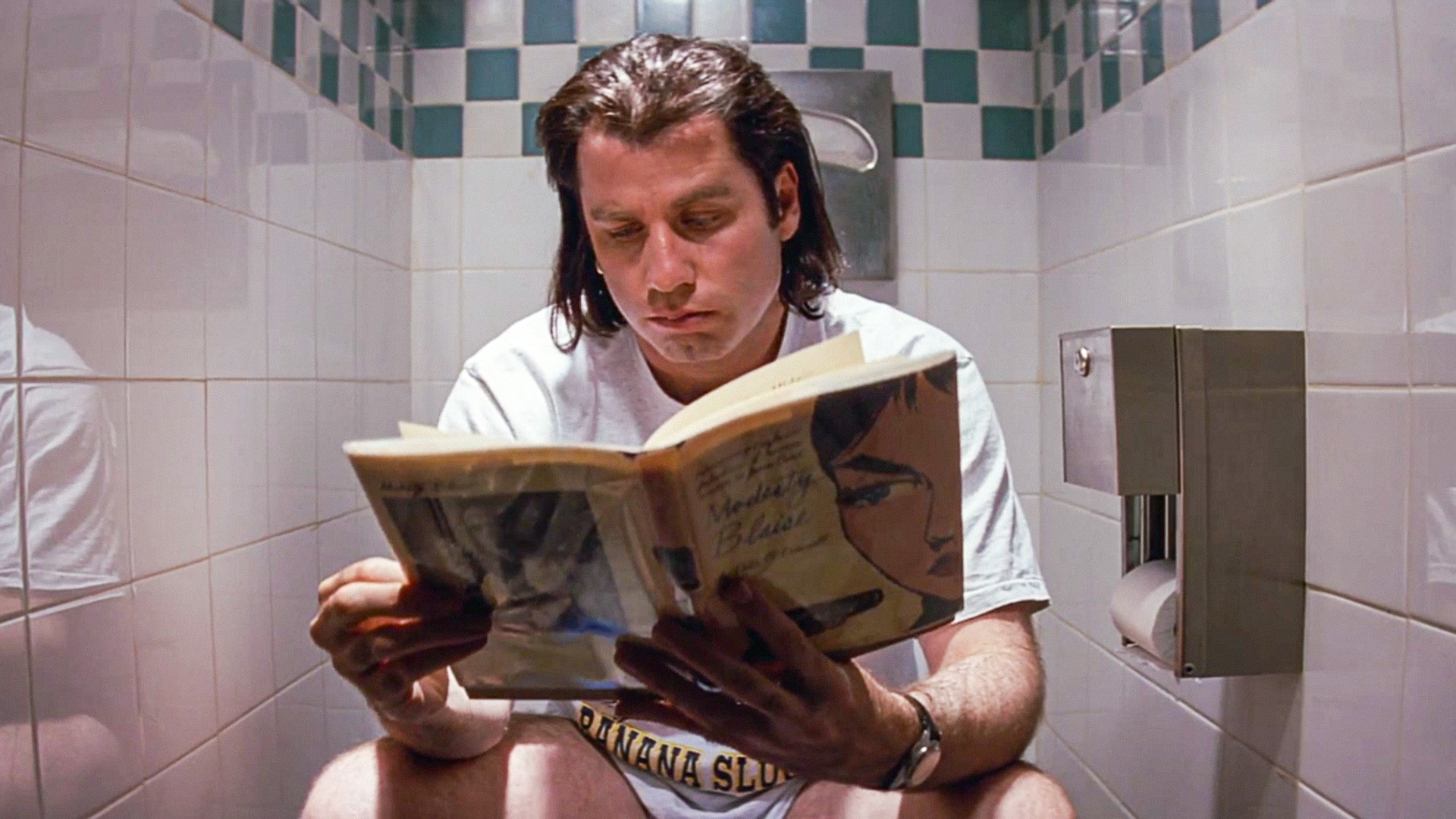 There was a certain beauty to it in a way. You enter a bathroom and inside find a pile of books, magazines and newspapers, perhaps on a shelf or just lying on the floor. Sometimes there was even a proper and well-stocked bookshelf in there. And lots of magazines. One might even think for a second that they had found themselves in a small library. But no, it was actually just a bathroom. For Soviet people, the bathroom was often an alternative reading hall. We were, after all, "the world's most well-read country." If only because there was nothing interesting to watch on TV and cinemas rarely had anything good on.

A place of solitude

Most families in the Soviet Union had subscriptions to several newspapers and magazines. But how did they find time to read them all? Sure, you could read on the way to work, for example, but indulging in some bathroom reading was a far more comfortable option. This is how newspapers and magazines found their way to bathrooms and sometimes ended up spending years there.

Soviet people read half of their books on the toilet too. Why though? The answer is actually simple. Given the crowded housing conditions that most Soviet people lived in, it was not always possible to find a quiet corner to enjoy a book without being disturbed by a younger sibling playing nearby, the mutterings of a grumpy grandmother or the swearing of a slightly tipsy head of the family. It was often the case that big families lived in very cramped conditions.

So where was an avid reader to find a quiet place to dive into their favorite books by Thomas Mayne Reid, Jules Verne or Leo Tolstoy? 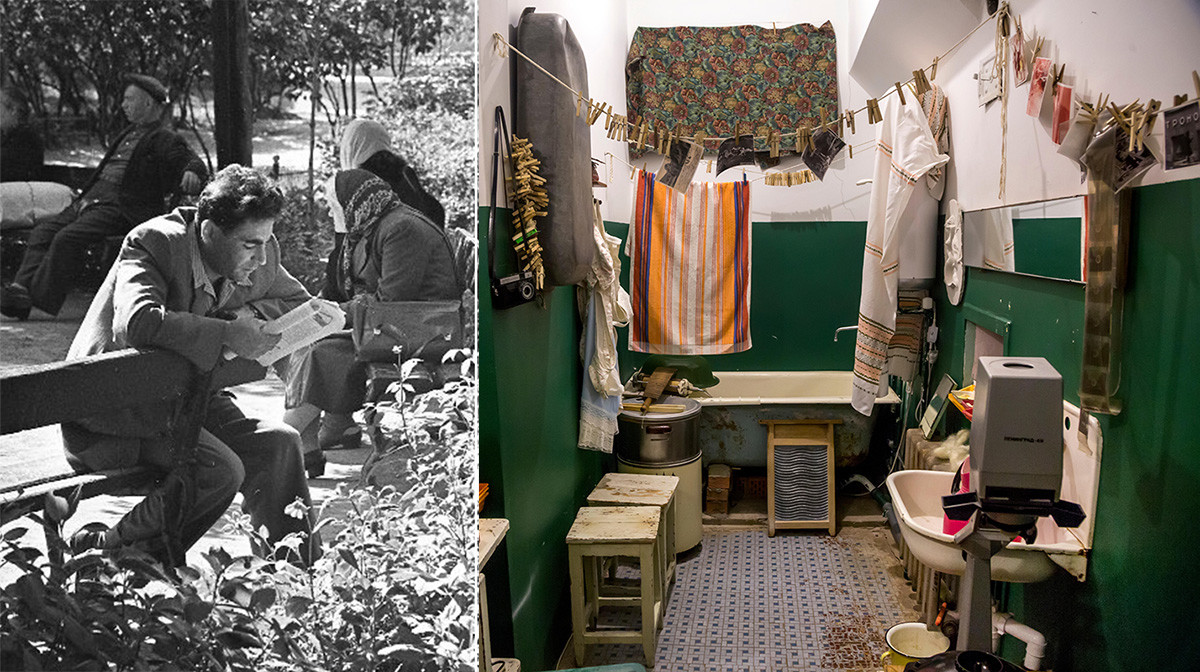 The only quiet place in the flat. True, within half an hour somebody would inevitably start banging on the door and demanding to let them use the facilities. But at least it still gave the reader at least half an hour of peace and quiet.

Furthermore, the bathroom was a place where one could read things in secret. For example, a teenager could peruse an issue of Playboy they had borrowed for a day from a friend whose parents were fortunate enough to have travelled abroad.

Or a student could read a bit of samizdat, i.e. literature that was banned in the USSR, such as books by Aleksandr Solzhenitsyn or Vladimir Nabokov.

Yes, there was the challenge of getting the reading matter safely into the bathroom, but this issue was easily solved. Furthermore, Soviet toilets often doubled as makeshift storage spaces and were stuffed with all sorts of items, so it was easy to hide any banned literature in them without anyone else noticing.

But let's get back to newspapers. The thing is that they often had two different functions.

The Soviet Union only began mass producing toilet paper in 1969. Yes, Yuri Gagarin had already been into space, we were the world's leading scientific and technological power, but people in the USSR did not have a sufficient supply of toilet paper.

So it is not hard to guess what other use newspapers were put to. A rather apt two-in-one combination.

All the more so because even once the Soviet Union did begin mass producing toilet paper, it still remained in short supply and was not always easy to find in shops. So when you did find it, you tried to stockpile it. Meanwhile, people who were not so lucky could always use newspapers.

Newspapers, on the other hand, were never in short supply in the USSR. Sometimes people were even obliged to subscribe to certain publications. For example, somebody working on the railways was expected to have a subscription to the corporate publication, the Gudok. And all members of the Communist Party were supposed to be subscribed to Pravda newspaper. Pravda was written in the bland language of Soviet officialdom and basically impossible to read, but it did serve tolerably enough in its other capacity. This is why many unfortunate members of the Communist Party of the Soviet Union ended up reading the party's mouthpiece in the bathroom.

There were even discussions among connoisseurs of hygienic comfort as to which publications were printed on softer paper and therefore best suited for bathroom use.

Bathroom reading has not gone anywhere and is still very popular. Except that these days books are less often the preferred reading matter for this pastime. Women tend to have piles of glossy magazines in their bathrooms. There are also special books for bathroom reading, mostly detective stories and paperback thrillers. People often say: "I have books that I read in bed and books that I read in the bathroom."

This seems to be true for everywhere in the world.

So toilets in Russia no longer look like small libraries. Plus, almost everyone has a smartphone these days.

…When I was 14, I decided to decorate our old bathroom door. I took a pile of old newspapers, a pair of scissors and got down to work, cutting out headlines and trying to choose the more stirring ones, like for example: "Forward, to new achievements!" I then pasted this assortment of headlines onto the bathroom door, trying not to leave any space blank. These days, the result could probably be described as a kind of art installation and could even perhaps be sold as a work of art, while I myself would have been hailed as a topical artist. But really I was just a fun-loving Soviet teenager who wanted to take the idea of bathroom reading to the limits of its esthetic absurdity.