The most important room in the Soviet apartment 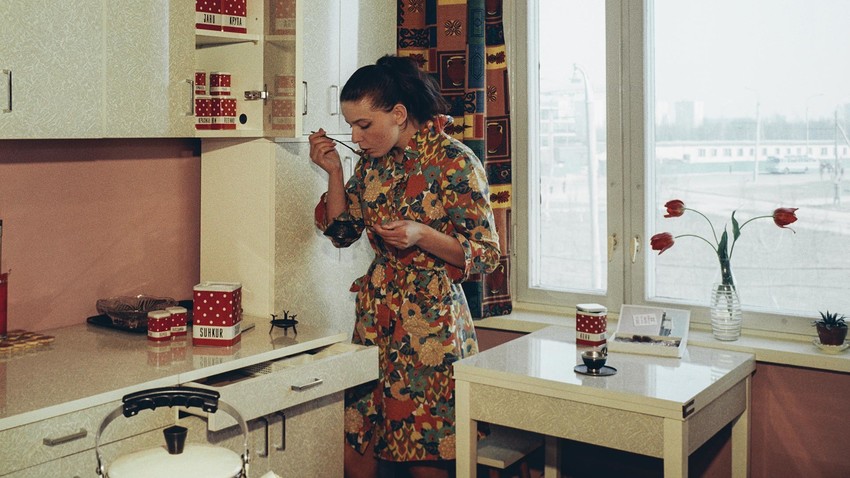 Sputnik
Every Russian knows what a 'kitchen talk' means. Do you?

Take a look at the plan of a standard Soviet apartment in a khrushchevka, a cheap, easy-to-construct panel house that most of the Soviet people lived in. In this plan, you can clearly see that the living rooms are very small. 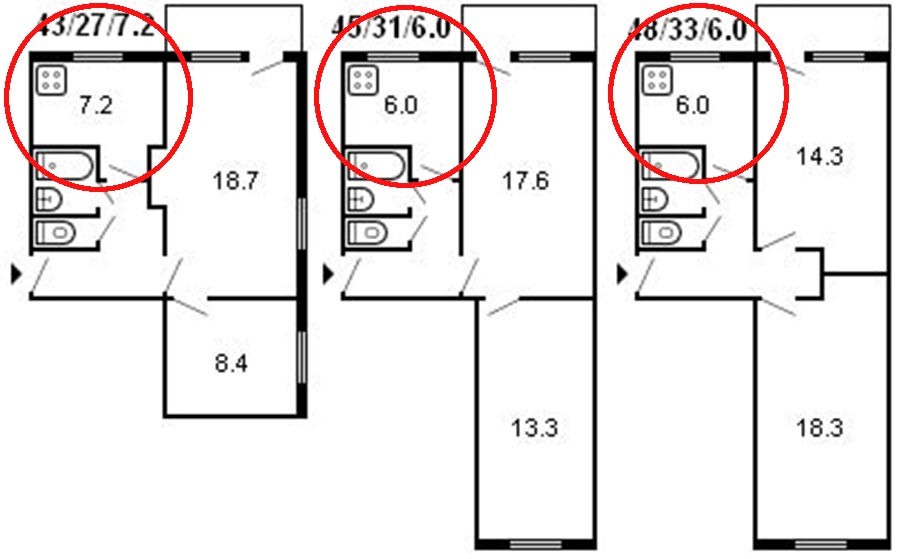 A plan of three apartments of a Soviet residential building. Kitchens are marked with a red circle

If a family of four lives in such an apartment, both rooms serve as bedrooms and living rooms at once, and there is only one room where nobody sleeps at night – the kitchen. Because of the planning, Soviet kitchens became a phenomenon in itself.

Revolution with a shared WC 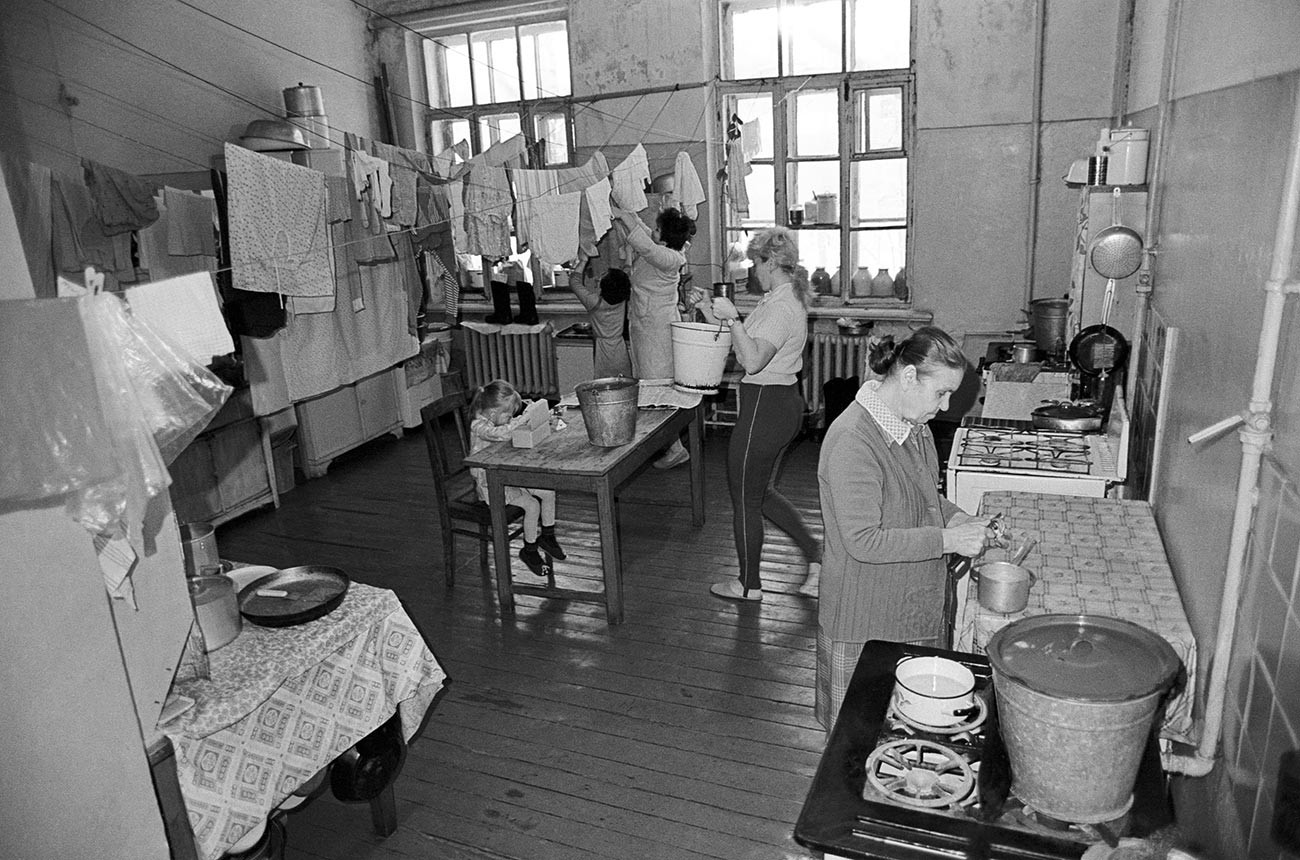 A kitchen in a communal apartment. You can see the tenants have separate tables, stoves, clothes lines

In Tsarist Russia, the phenomenon of the kitchen was non-existent. Peasants made food on stoves located right inside the houses, there was no separate kitchen room. Rich peasants, merchant families, noble people who lived in the cities, usually had kitchens as a place to prepare food, and these kitchens were frequented by the servants. Even when big city houses with multiple apartments appeared, where each apartment was equipped with a kitchen, people didn’t spend time in the kitchens – until the Soviet era.

The early Soviet citizens became familiar with the word uplotnenie – when private property was nationalized by the Bolsheviks in 1918, so were the living apartments. Many owners of 5-6 roomed flats had to squeeze in new tenants at the order of the government, that demanded only one room was available for every adult. In reality, this turned of course into whole families living in 10-12-meter rooms, because there were much more tenants in the cities than the housing stock could handle. Kommunalkas appeared, communal flats where unrelated people lived in the same apartment and shared bathrooms, WCs – and kitchens. 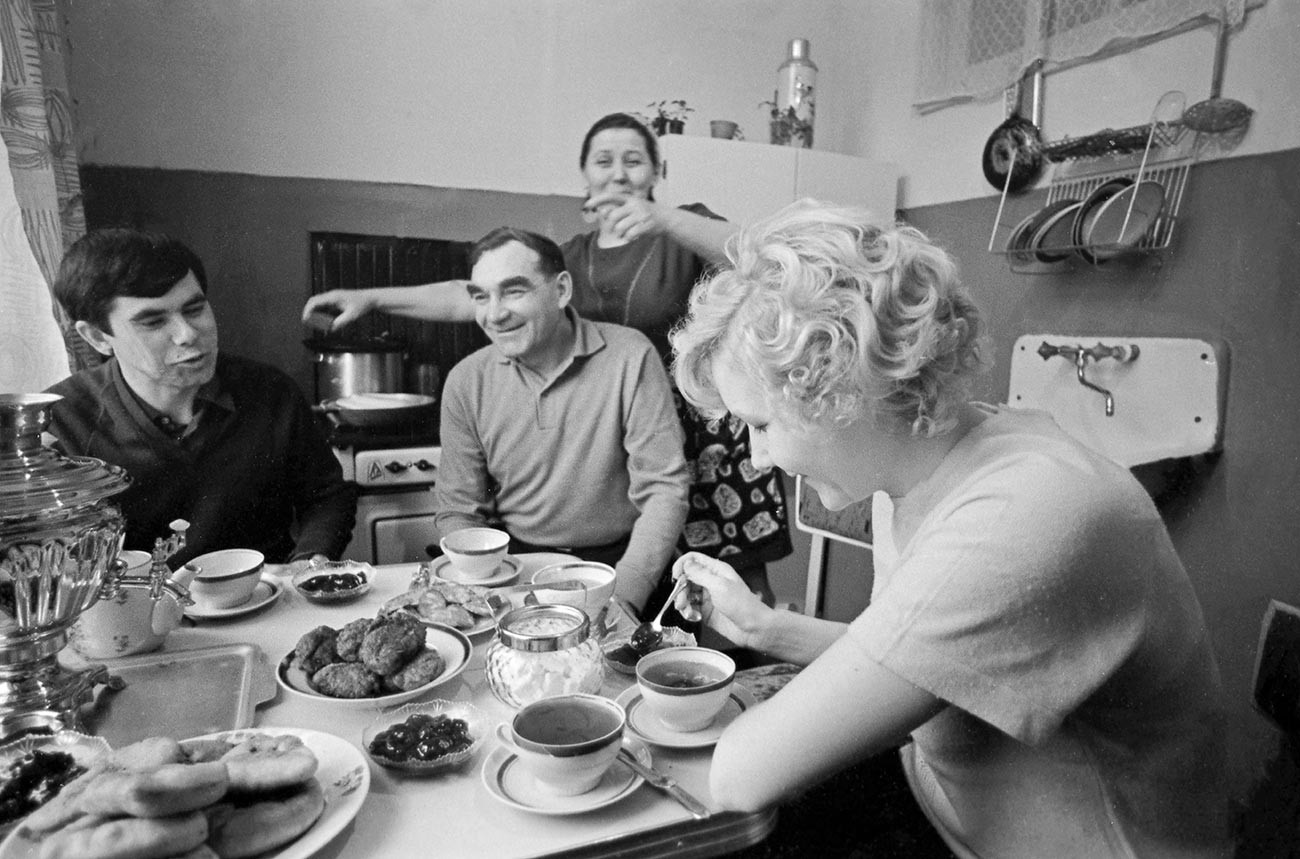 The Trofimov family, all of them workers at the Cherepovets metal plant, in their kitchen at breakfast

“The kitchen was shared. If the neighbors got along well, then household utensils stood or hung over each respective table in the kitchen, their number matching the number of the tenants in the apartment. If the neighbors were "unreliable", everything was carried into the room, up to matches and salt,” painter Irina Soya-Serko remembered.

Kitchen was a unique room in a communal apartment. On one hand, it was a functional room, meant for food preparation. On the other hand, the kitchen was a social place, a kind of the apartment’s “forum.” Ilya Utekhin, Russian anthropologist who researched the phenomenon of communal living, wrote: “The kitchen is the center of the social life of the apartment, the main place where the tenants meet and interact, the main stage of public events in the life of the apartment. Other public places can't compare to the kitchen in such multi-functionality. In the kitchen, a person can be present even when he/she is not currently preparing any food and does not perform other household work, but simply wants to communicate.” “Six rooms and a large communal kitchen where the neighbors quarreled and made peace. Such different people, and secrets were told about their lives in this kitchen,” a St. Petersburg female user olyashla recalls. 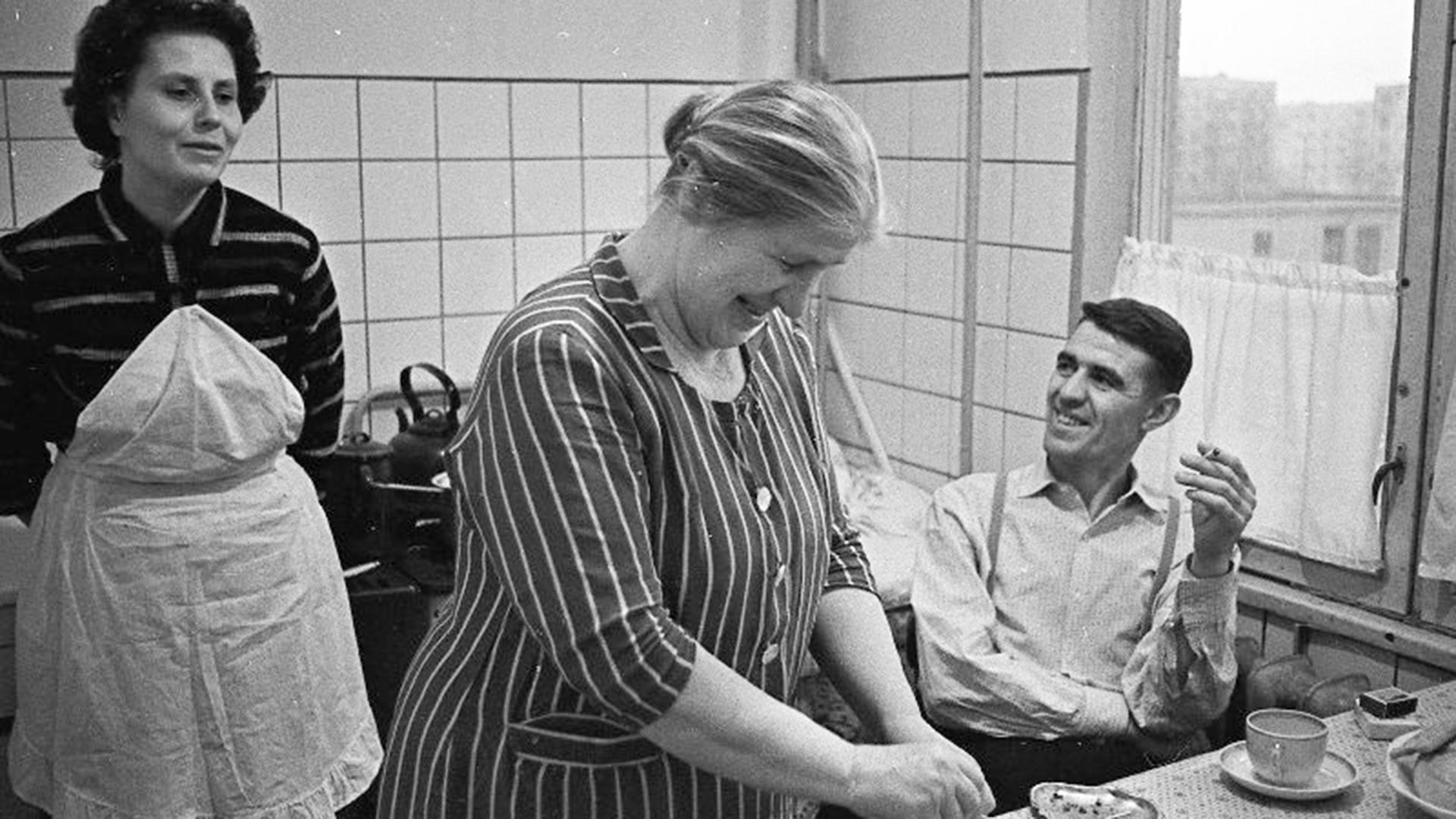 The Lavrentyevs in their kitchen.

Communication could be rather different – if the neighbors were hostile to each other, they had to be in the kitchen overseeing the process while the food was cooking. Not only so that the cooking won’t spill over the stove. “The kitchen was the front line, and the fighting on it was serious. ‘Good neighbors’ turned off the gas under someone else's undercooked food. Salt went to the kettle, and sugar was added into the soup. Or shoe polish. Or soap. Just go out for a minute – and that's it, the dinner is ruined,” – historian Alexey Mitrofanov writes. 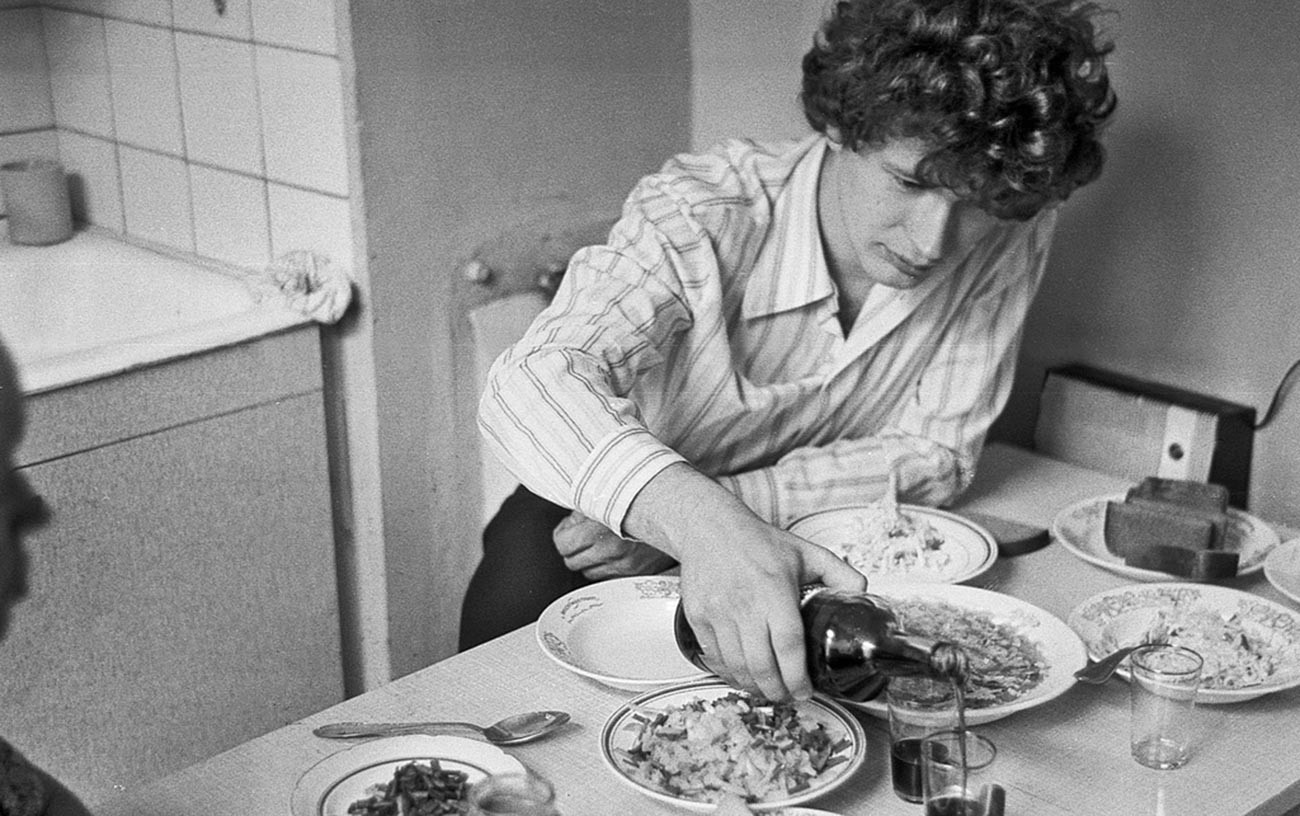 Kitchen was the place for eating, drinking...

The stove in the communal kitchen was usually ‘zoned’ between the tenants. So one part of the stove could be cleaned, and the other one dirty – tenants often had different views on hygiene, and at the same time, nobody wanted to clean up the other one’s mess.

However, when the tenants lived in peace, the kitchen became a place of mutual aid and jolly celebrations. “All the celebrations were done together by all the families, their relatives and friends,” user katerinaami from St. Petersburg remembers. “And there was always someone who would treat and feed you, just go into the kitchen.” 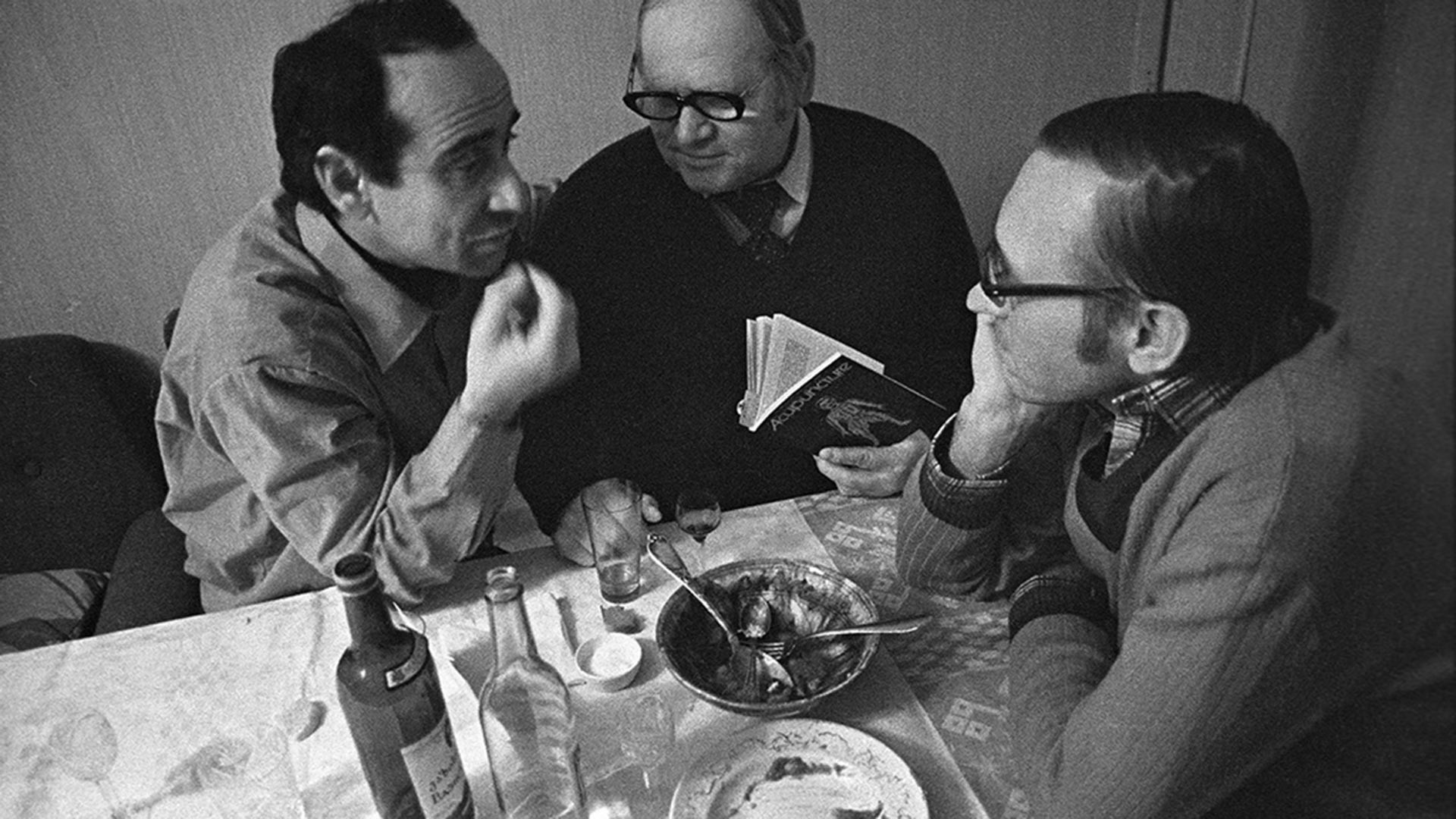 Just like ‘a smoke-filled room’ is an idiom in English for a secret political gathering, the expression ‘a smoke-filled kitchen’ in Russian means a place for clandestine talks, often political discussions. In the USSR, there was no freedom of speech, infamously. Everybody was forced ideologically to follow the ‘course of the Communist Party.’ Often, the only place where one could speak his/her mind was one’s kitchen. And do it quietly, if you’re in a communal apartment – the neighbors could hear you cursing the Soviet authorities and report you to the KGB. “You and I sit in the kitchen. [...] Tie up the basket before dawn, so as to leave for the station, where no one will find us,” – reads Osip Mandelstam’s famous poem about him and his wife Nadezhda running from the state security in the early 1930s, ‘marking’ the night kitchen in the Russian poetry as the chronotope for everything anti-Soviet. 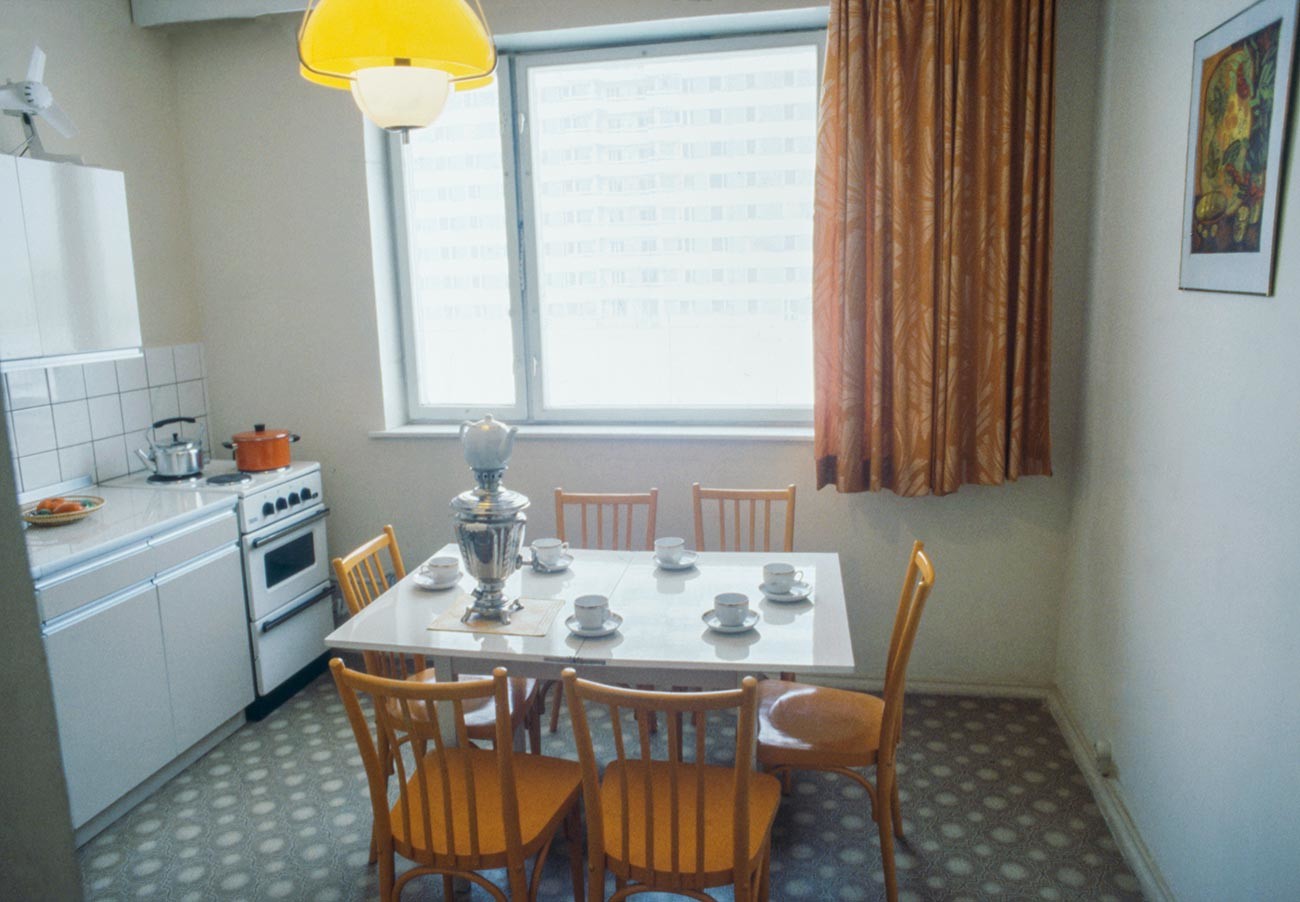 A kitchen in a newly built house. That's the kitchen most Soviet people dreamed of.

Actor Valeriy Zolotukhin recalls visiting writer Boris Mozhaev in his communal apartment: the writer couldn’t invite his guests to his rooms, because children were sleeping there. So the kitchen became for Mozhaev also a study: “on one of the tables, among the dishes, there was a typewriter, some clean paper and the writer’s pen. [...] We drank and started talking about life, mainly about the Russian land, the peasantry… He talked a lot about Tolstoy. There were giant ‘communal’ flies flying around casting huge shadows against the lamp.” 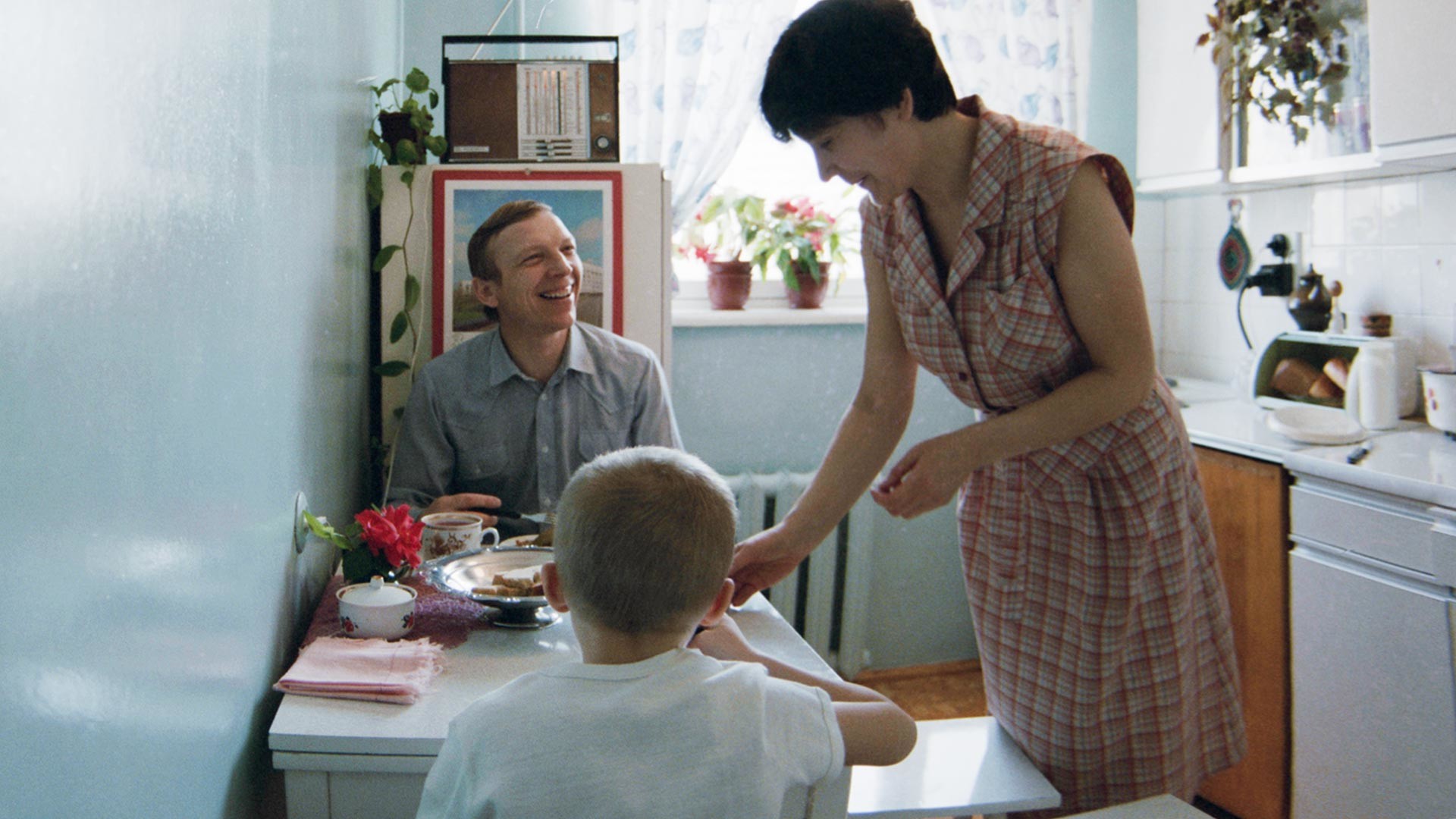 "AutoVAZ" plant worker Nikolay Balashov having breakfast in his kitchen with his family.

The culture of “kitchen talks” went beyond communal apartments into the era of relatively-private housing, when in the 1980s, most Soviet people already had their apartments for their families and nobody else. The reality of the kitchens is reflected in many Russian rock song lyrics. “Some words for the kitchens, the other ones for the streets,” rock band ‘Nautilus Pompilius’ sang. “I love kitchens because they keep secrets,” Viktor Tsoy had it in his lyrics. Russian kitchens still remain ‘social’ rooms in Russian apartments – to a big extent, because the apartments are still mostly small-sized.