10 bizarre things Russians keep on their balconies - just in case 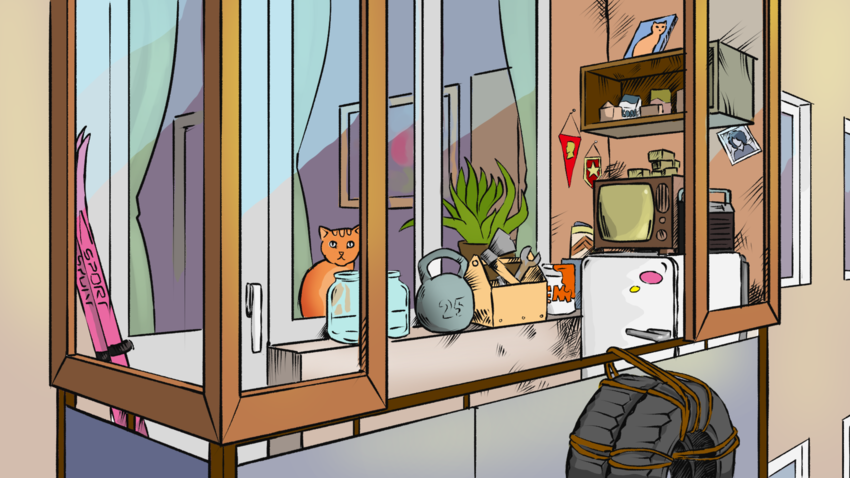 Gregory Avoyan
Russians are always ready for the Apocalypse, just take a peek at their balconies. Russia Beyond brings you a list of the strangest things people hoard away for a rainy day.

people hold back a single wooden ski. If you ask your Russian friend we bet they’ll say: “Just in case!” Perhaps It can be used for firewood or to kill a vampire (after being whittled down)…

In fact, most people keep a wooden ski for nostalgia’s sake. It reminds them of their youth (depending on their age). If you could afford skies during the Soviet days, you were very lucky indeed.

the USSR, kettlebells were popular. Most Soviet men had one or two at home and used them for weightlifting. These days they collect dust on balconies but once upon a time some people believed Communists hid their gold and platinum reserves in the objects. Perhaps this is why some Russians keep them, in the hope they possess a small fortune.

need to preserve vegetables in jars for winter is etched into Russians from childhood. Even if they don’t have a dacha to grow the or time to do so, he or she will probably have a load of old jars tucked anyway.

Russian balcony is complete without an old fridge. Take out the shelves, unplug it, and it becomes a rather convenient cupboard for socks and tights. Maybe give it a good clean first though.

old Russian proverb something like this: Never throw away an old TV or radio. Only joking, but most Russians appear to abide by the rule, just for the hell of it.

there anything more useful than an old paintbrush covered in rock-hard, dried paint? Russia might be the only nation on this planet that actually dips brushes in white spirit after using them - which is why so many people in the country store them on their balcony. Dried paint can also usually be resurrected with a touch of solvent.

How else are you going to chop up your single wooden ski to make firewood?

Almost no one uses laundry soap over washing powder. But many people keep big boxes of the stuff at home. Why? It has no expiration date, which is great when you run out of powder and desperately need to wash your soiled underwear.

Russia Beyond challenges you to write something more useless than a bald tire in the comment section below. We are lost for words.

Russia, there is a phrase: “Emergency reserve” (, or NZ). Every Russian knows what it means. And every Russian a few vital ingredients in case of an emergency.