Culture
Alexandra Guzeva
Soviet art was intended to serve the ideological ideals of communism, and many artists obliged. We selected 10 works that were used to instruct people in how to live properly and love the Motherland. 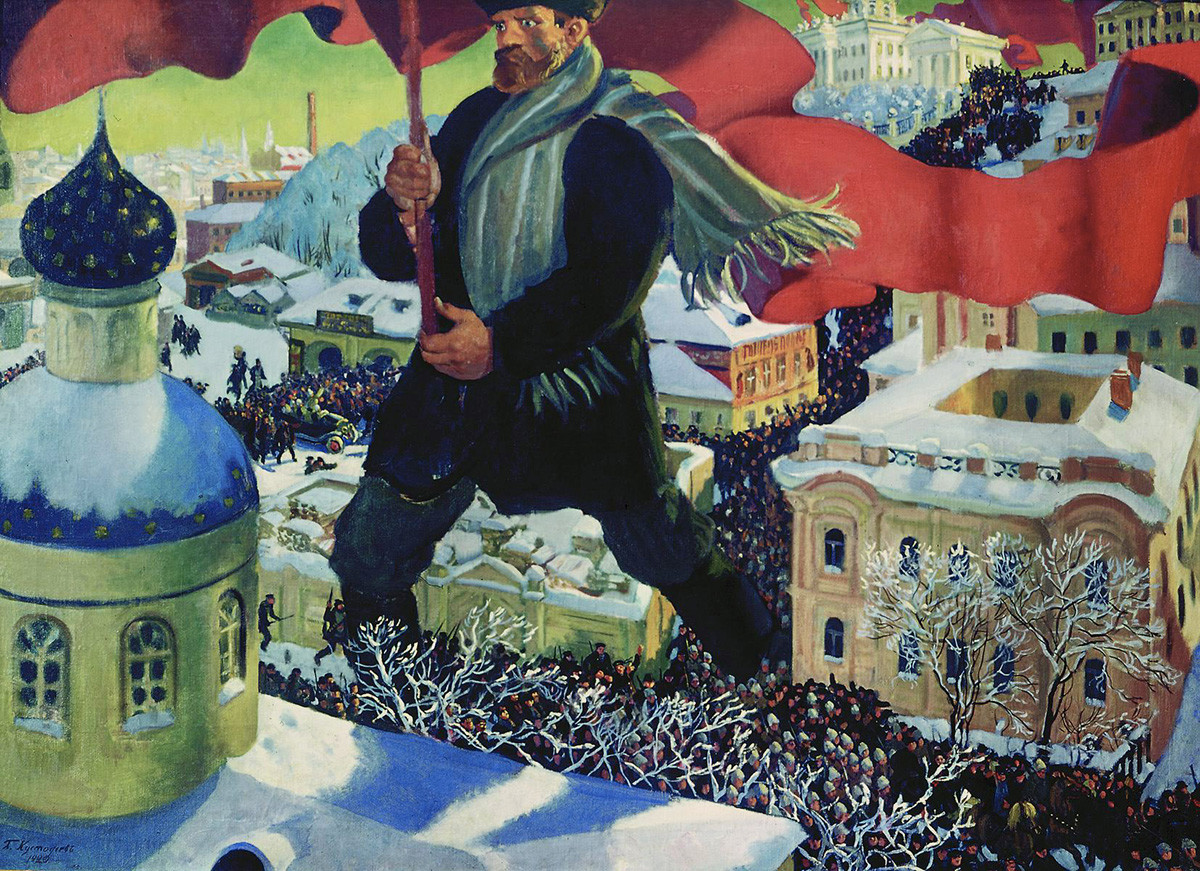 Kustodiev's allegorical painting depicts the gigantic figure of the Bolshevik, the ruler of the new world, waving a red flag and leading the crowd into the glorious communist future. The work was very much to the Soviet authorities’ liking, and later formed part of the collection of the New Tretyakov Gallery. 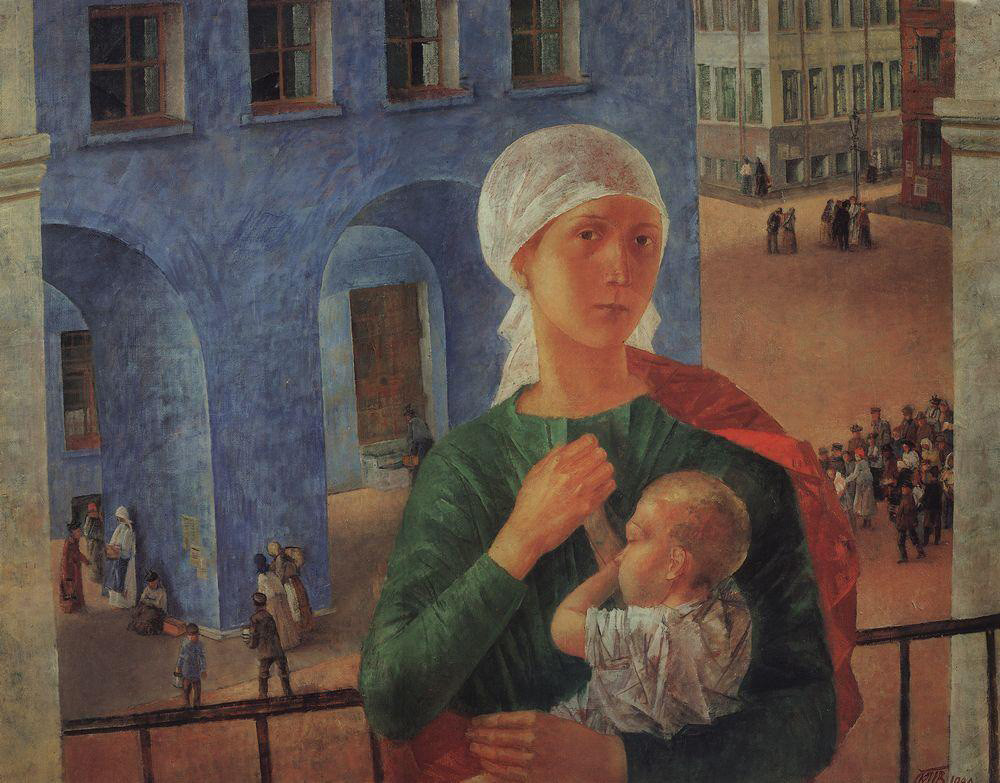 The works of Petrov-Vodkin resemble icon painting in terms of composition, color and symbolism. He could be said to be the icon painter of the new communist system, and one of his most emblematic “icons” is undoubtedly 1918 in Petrograd, also known as The Petrograd Madonna. The background portrays the revolutionary chaos that engulfed the city: propaganda leaflets, rallying crowds, smashed windows. Against this backdrop of unrest, a humble woman in a white shawl and her baby are symbols of the new life and the new Russia.

3. Alexander Deyneka. The Defense of Petrograd, 1928 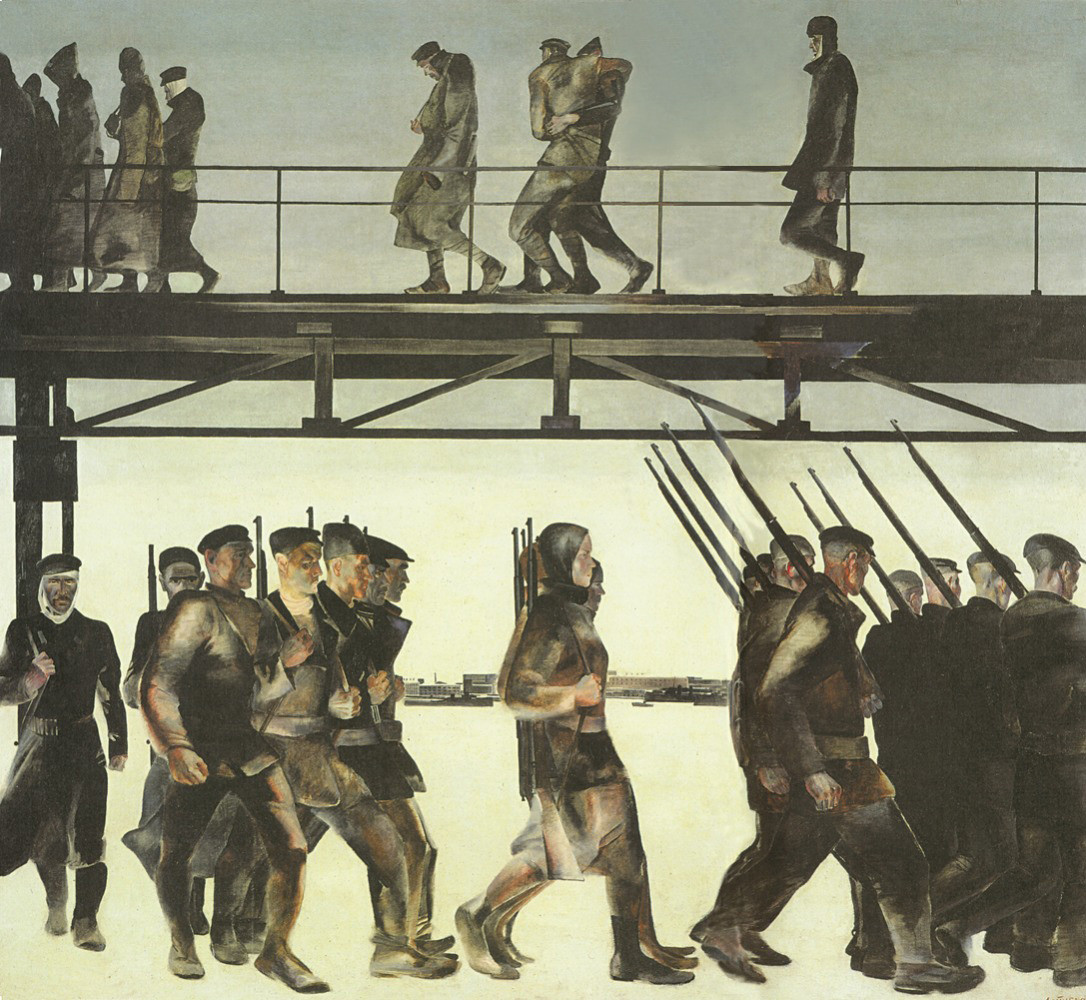 Alexander Deyneka’s style would later tend toward Soviet official art, known as socialist realism. Here, however, on the 10th anniversary of the October Revolution, he applies the “ornamental silhouette” technique. The composition seems to be looped. In the foreground (lower plane), soldiers march off to the Civil War, while in the background, the movement is in the opposite direction — the wounded, wrapped in greatcoats, are returning home.

4. Alexander Gerasimov. Lenin on the Tribune, 1930 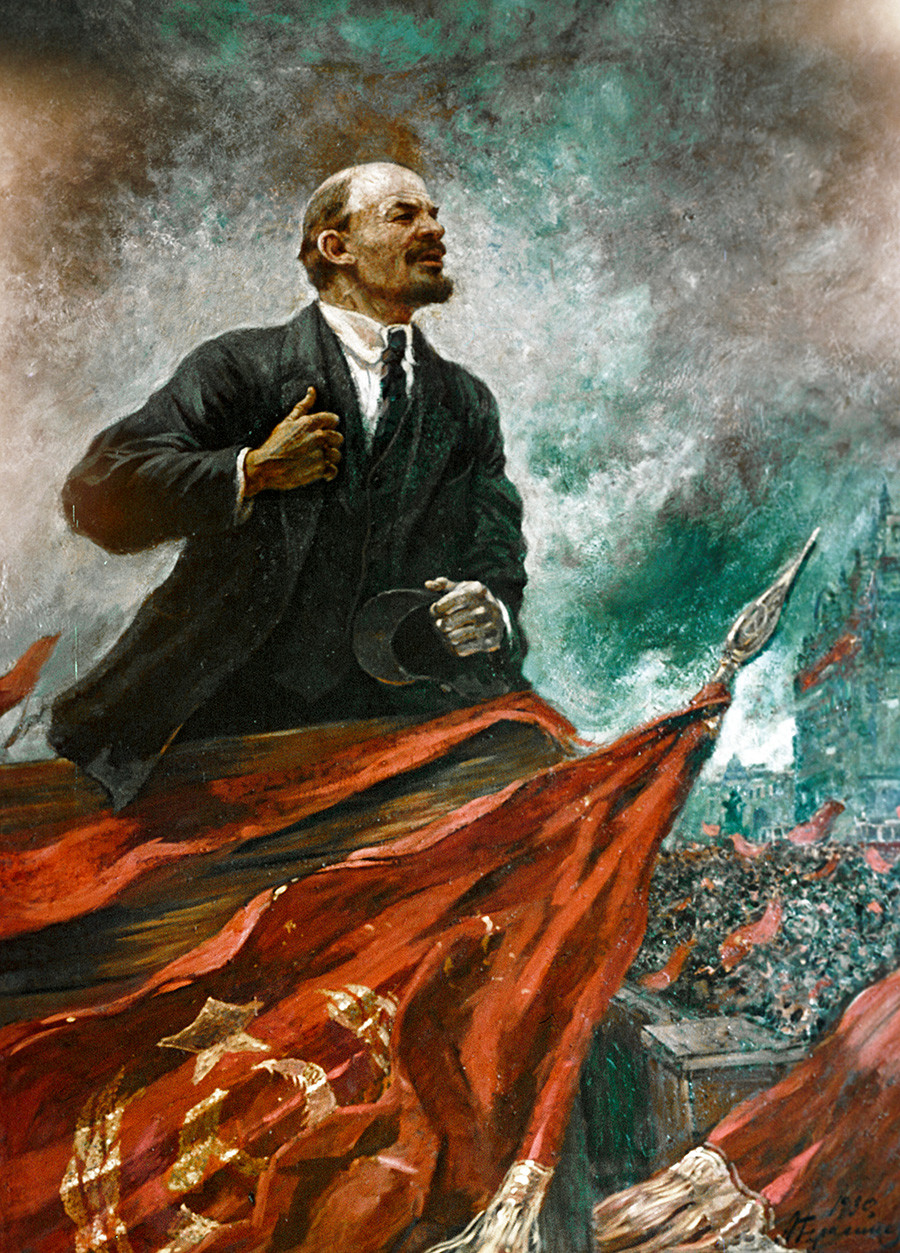 The leader of the revolution, Vladimir Lenin, was undoubtedly the main idol of the land of the Soviets. His image and biography were mythologized by artists and writers alike. He was variously depicted biding his time in a Finnish hut before entering revolutionary Petrograd, delivering a rousing speech to the masses, riding an armored vehicle, or taking part in a subbotnik (Saturday cleanup). One of the most famous portraits, by Gerasimov, shows him practically levitating above the Red Banner from the tribune. 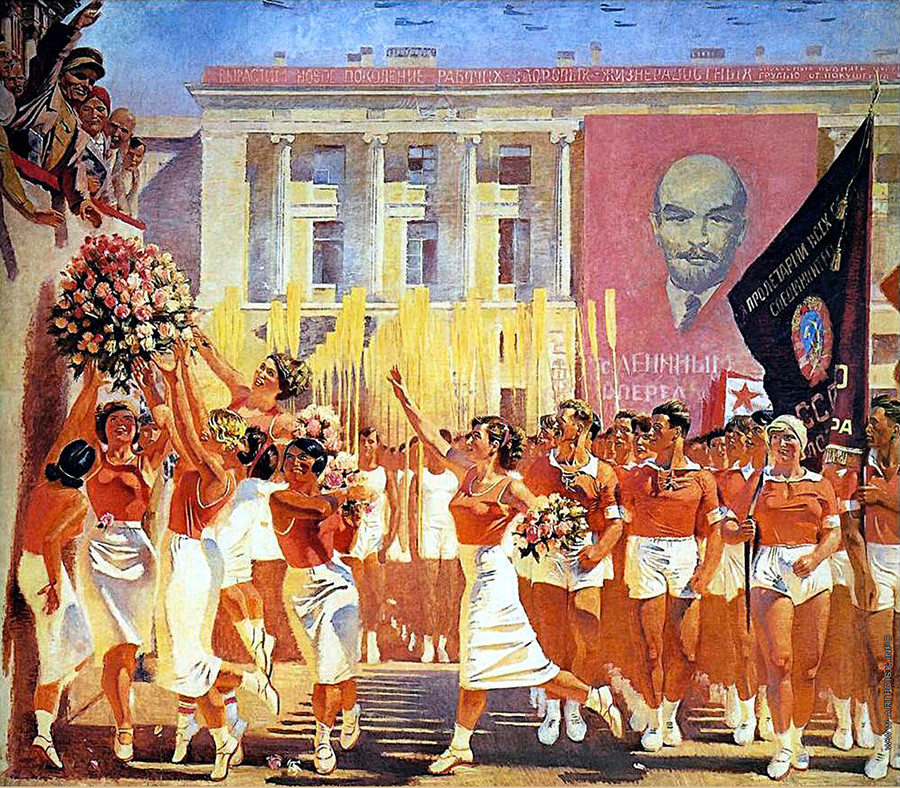 From its very inception, the Soviet state staked heavily on healthy living to improve industrial output. As such, artists were tasked with propagandizing sport and physical education. Samokhvalov was commissioned to paint several canvases about the joys of Soviet sport. 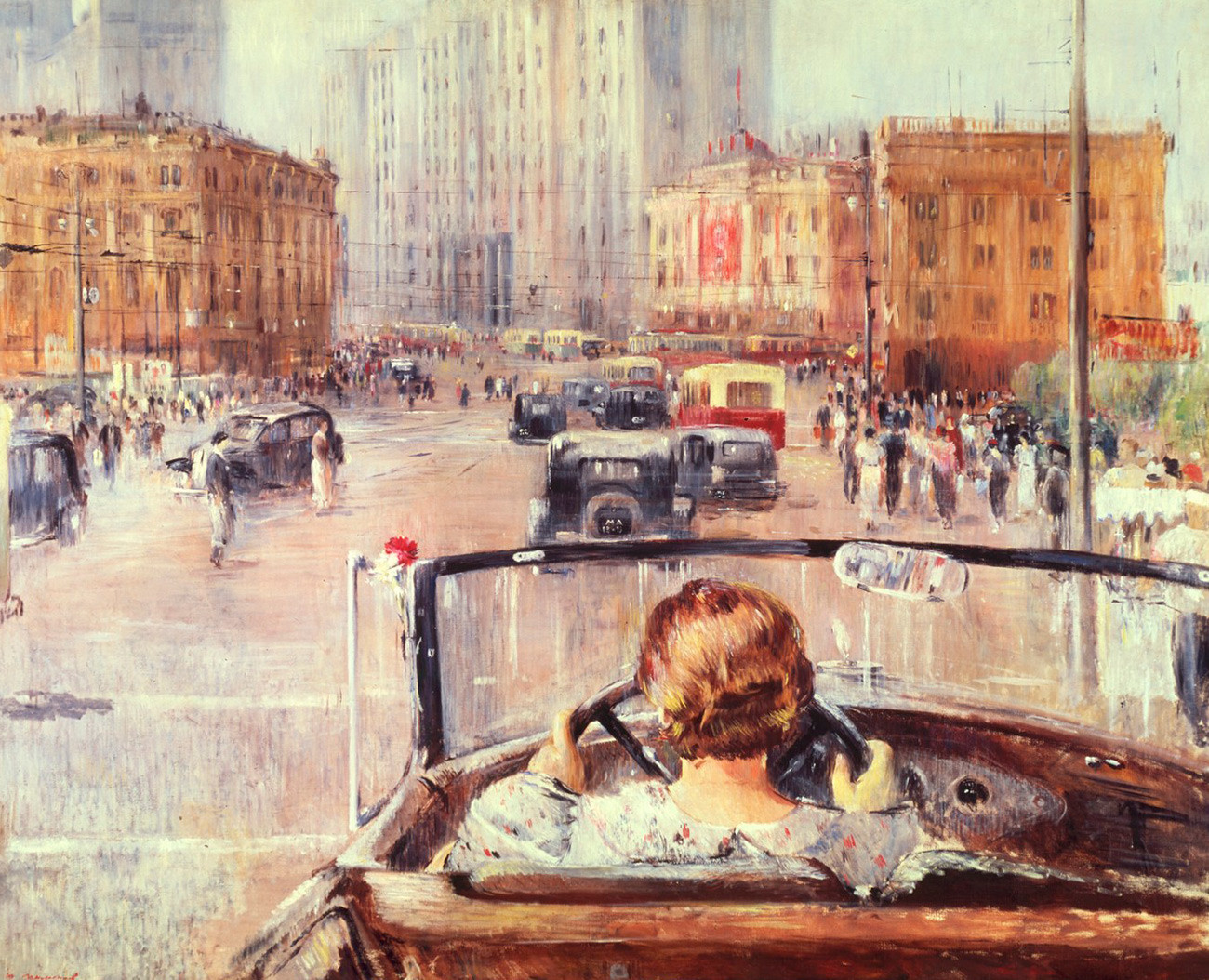 This painting is one of the symbols of socialist realism. A wide avenue bustling with people and cars, a transformed city flooded with light, and a lone woman driver — a sign of Soviet equality.

7. Alexander Deyneka. The Defense of Sevastopol, 1942 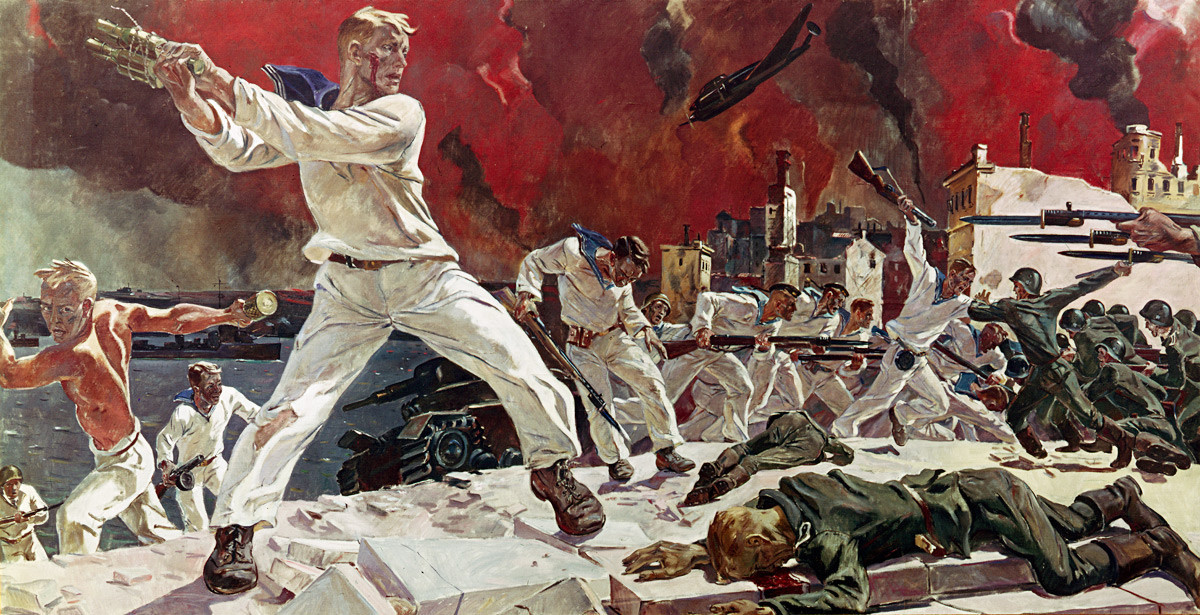 A vast swathe of Soviet art is dedicated to the heroism of Soviet soldiers in WWII. One of the most famous military canvases and a real paean to bravery is Deyneka's The Defense of Sevastopol. 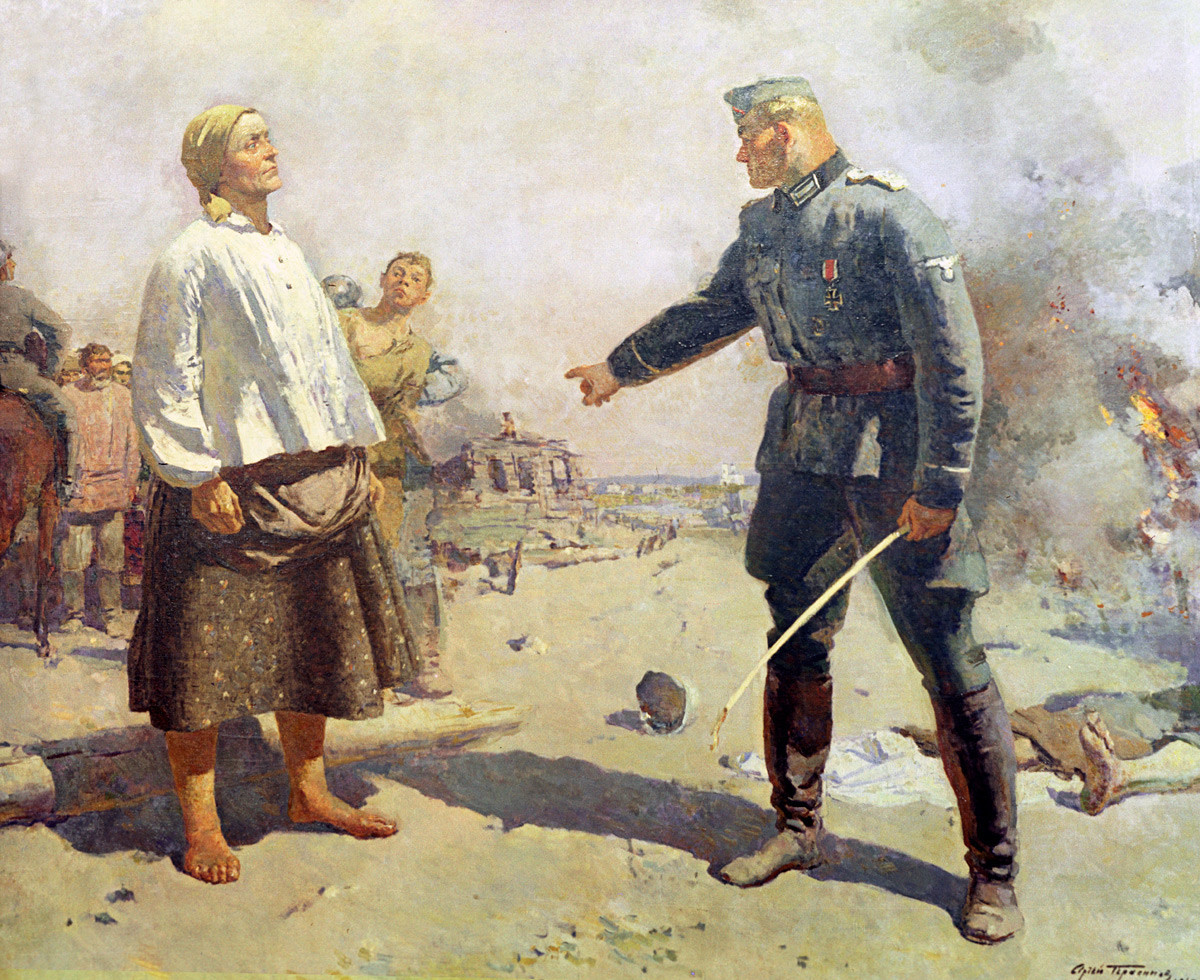 Sergey Gerasimov’s oeuvre glorified village life, collective farms and the peasantry. His famous painting Mother of a Partisan depicts a simple village woman staring fearlessly into the eyes of the enemy.

9. Alexander Laktionov, Letter from the Front, 1947 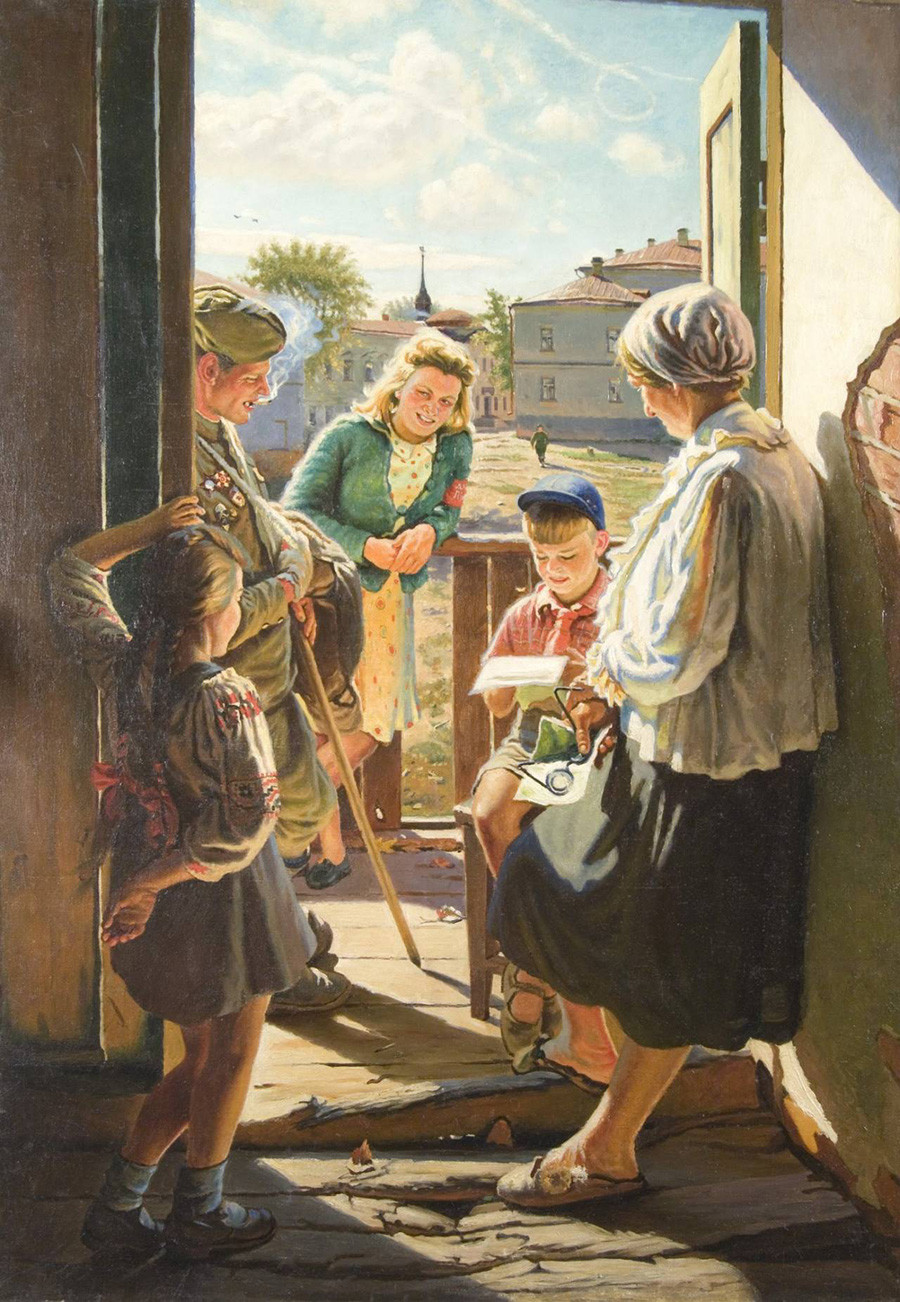 This picture was so popular in Soviet times that it was bought by the Tretyakov Gallery, as well as being printed in textbooks and on posters and postage stamps. 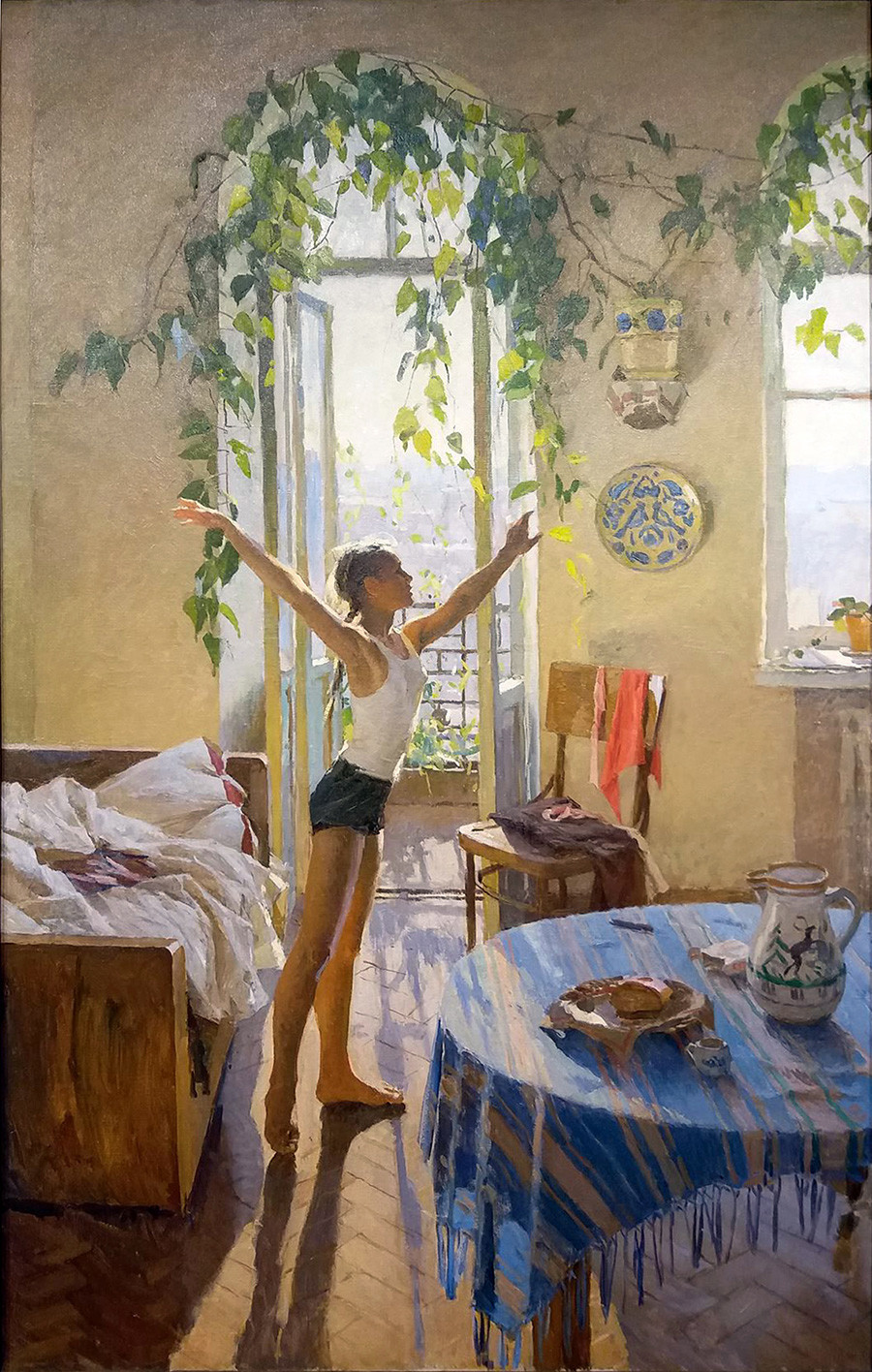 Another iconic work, this time depicting the joyful dawn of the Khrushchev Thaw. The girl in the picture, as befits any pioneer, is doing morning exercises. By beginning each new day in the correct way, not only is she “strengthening the body and mind,” but “moving forward to a brighter future.”