Would you live in a pipe? Crazy art objects in an open-air design park (PHOTOS) 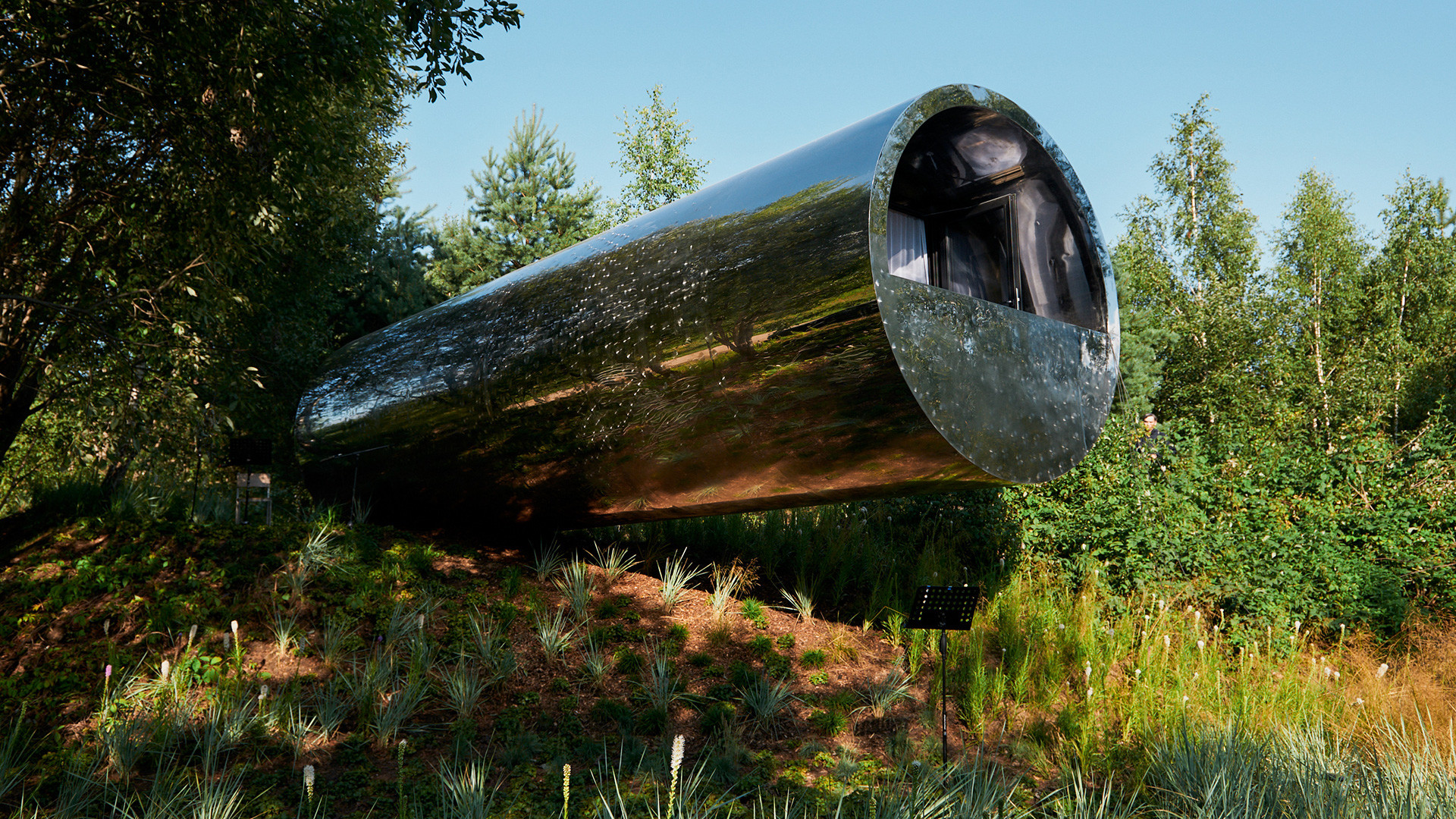 KROST
How do Russian architects imagine model houses for those who seek solitude? The following art objects in the Nikola Lenivets village were inspired by the pandemic.

What could be more romantic than lying on a meadow and enjoying huge land sculptures and architecture? Every year, the open-air festival of  landscape objects called ‘Archstoyanie’ is held in Kaluga Region (200 km south of Moscow). For several days, modern artists arrange theatrical performances and display their creations, which get a permanent place in the park at the end. The theme in 2021 became ‘Personal’: architects talked about how the pandemic forced people to slow down and focus on the inner world. 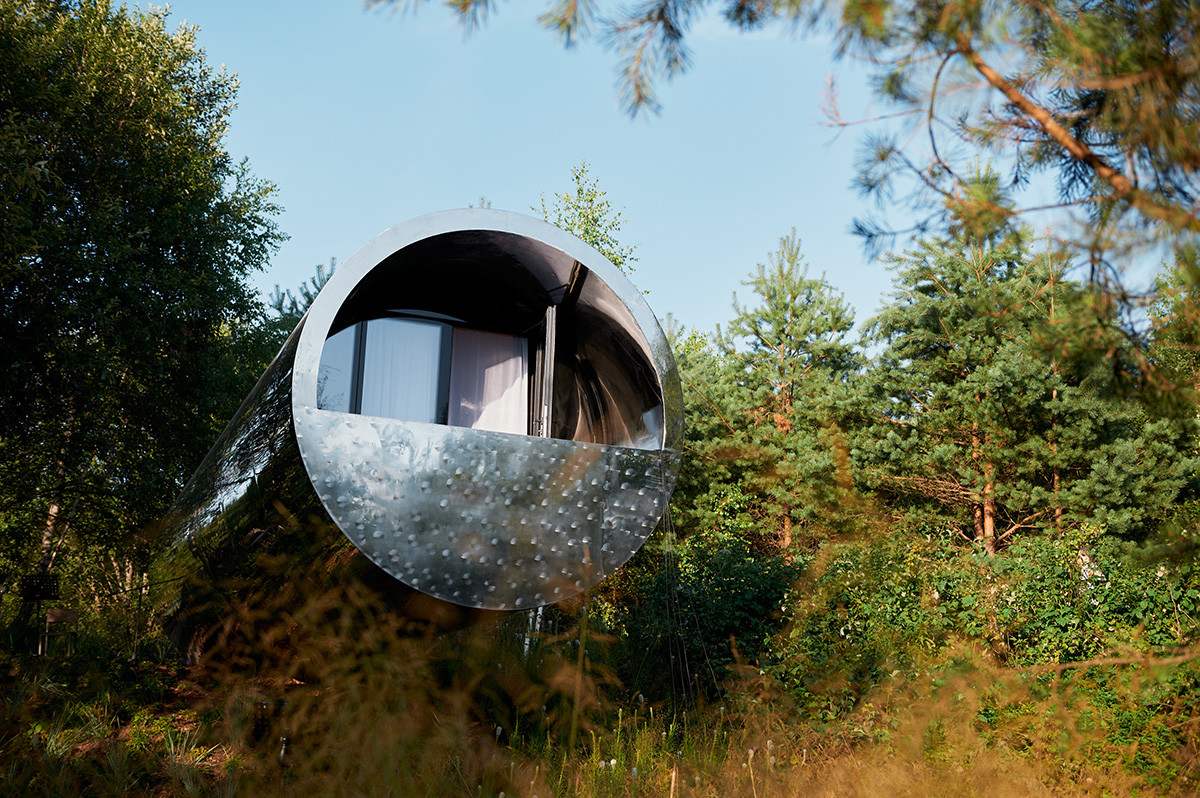 The main art object of the festival was a mirror house in the shape of a pipe from Moscow’s chief architect Sergey Kuznetsov called ‘Russian Ideal’. This is how the author turned his thoughts about the future of Russian architecture into reality. The house with a diameter of 3.5 meters and a length of 12 meters stands on the top of a hill and literally “hangs” in the air. Inside, it looks like a tiny studio apartment with a bedroom, a kitchen, a bathroom and a small hallway. 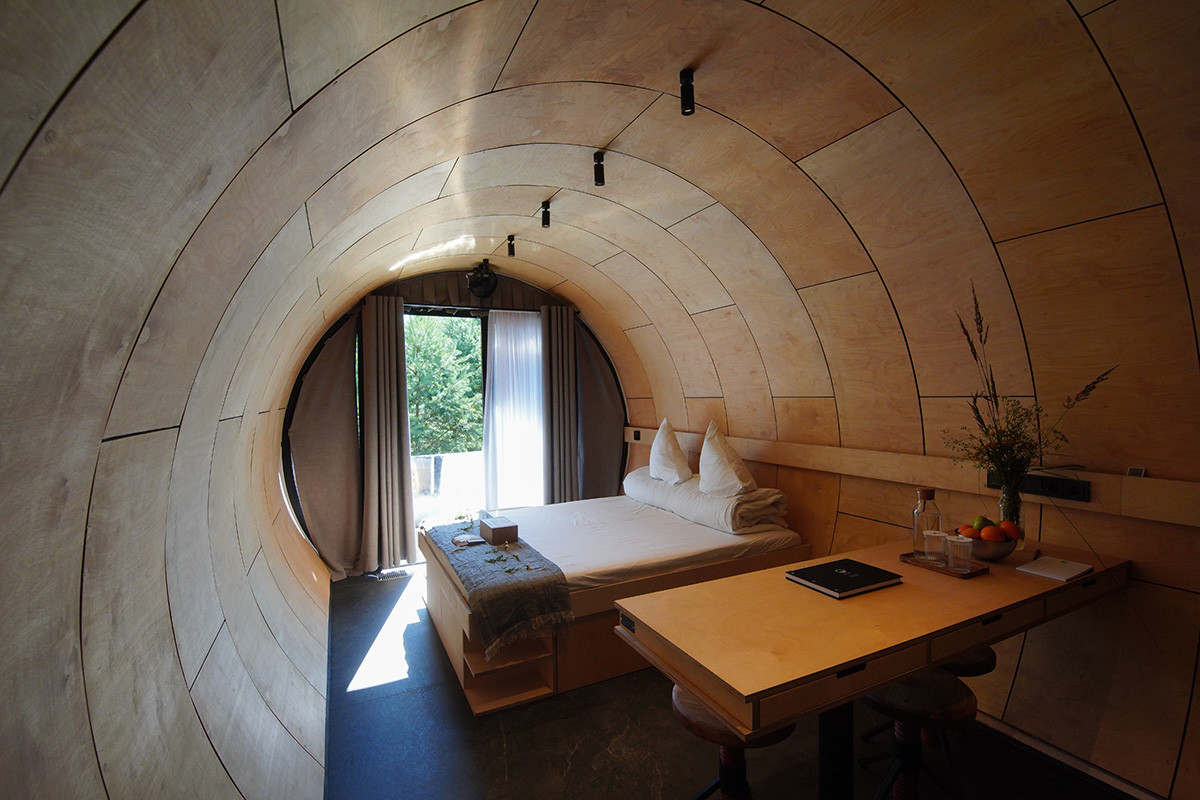 The interior is made of wood and metal and the floor is finished with ceramic tiles. And it is fully functional, with all the necessary amenities: water, heating, electricity - courtesy of the Krost construction company. Visitors will even be able to book this house for a night if they want to stay in Nikola Lenivets (no doubt there will be a long waiting list, however!). 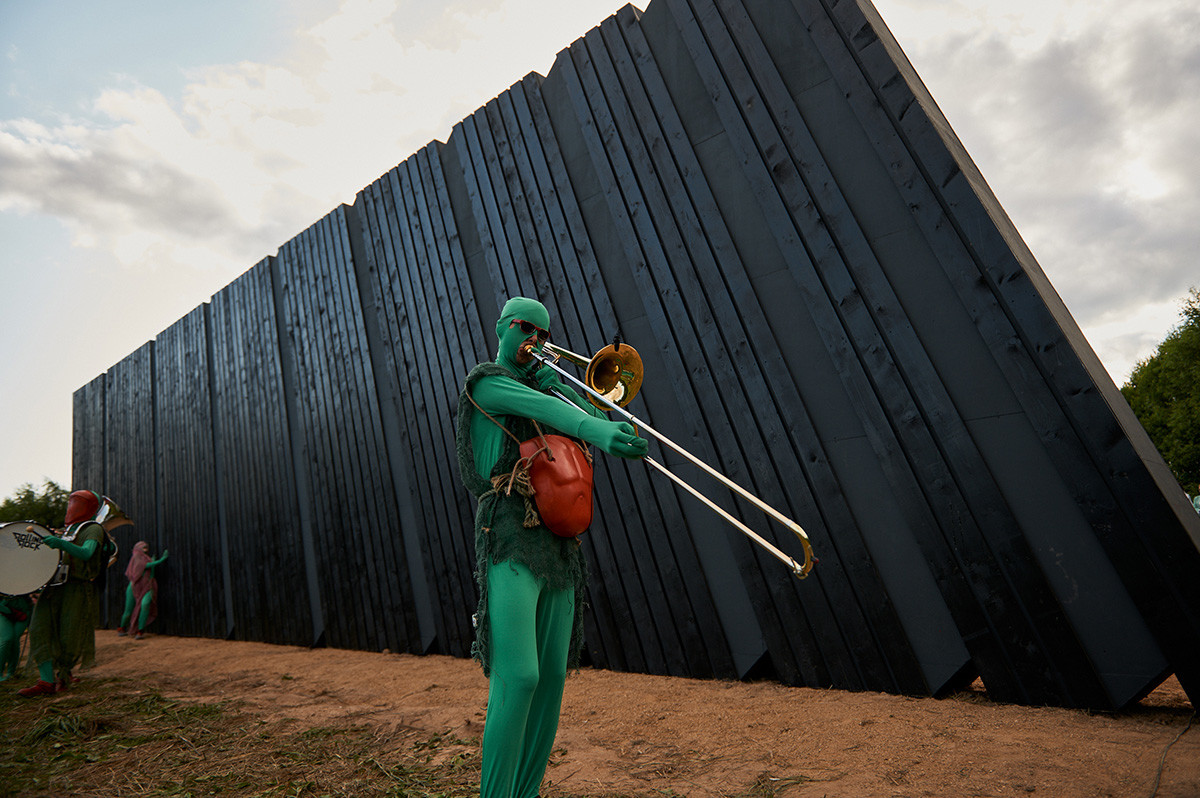 The installation symbolizing a wry wall appeared in the park thanks to artist Vladimir Nasedkin, with the support of the AZ Museum (Anatoly Zverev Art Museum). “When the pandemic began, as well as our complex relations with the whole world, it seemed to me that this was not only a fence, but also a wall separating us and our close people abroad,” the author says of his construction. 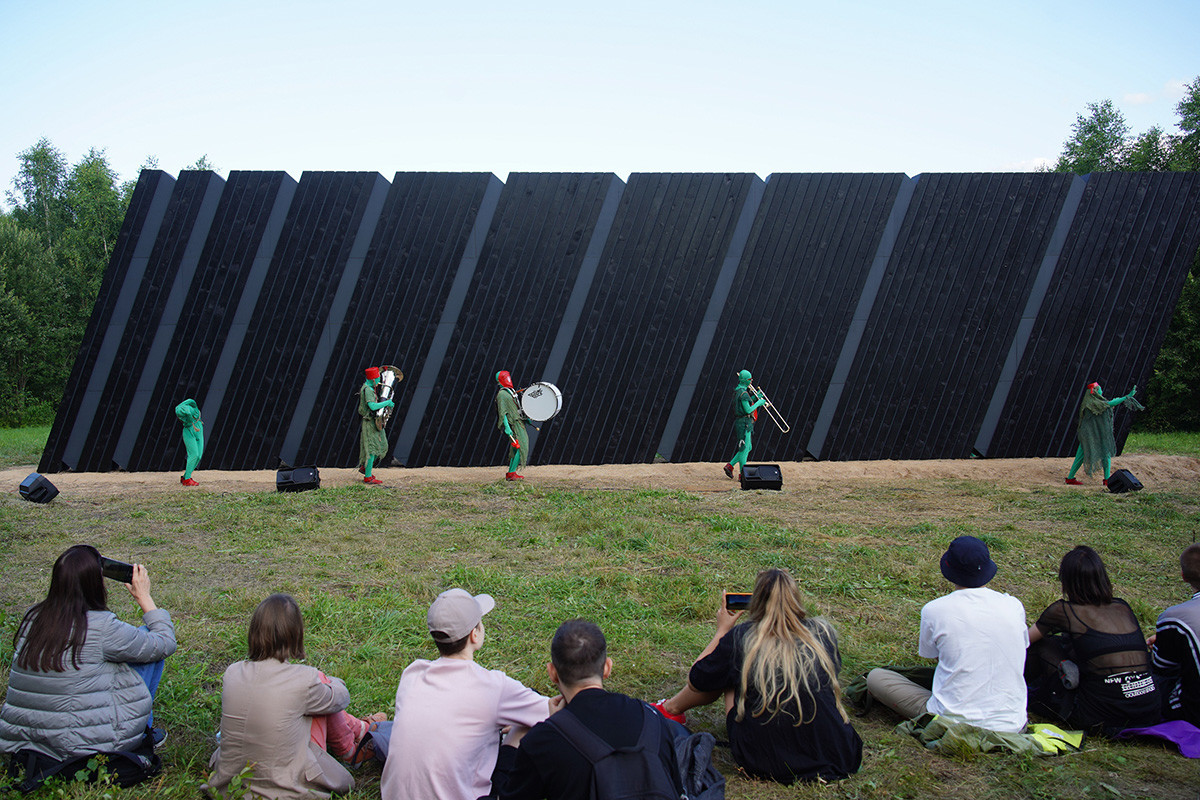 “The fence is such a common place that it seems not to be noticed and it becomes an ideal object for self-expression,” the artist explains. 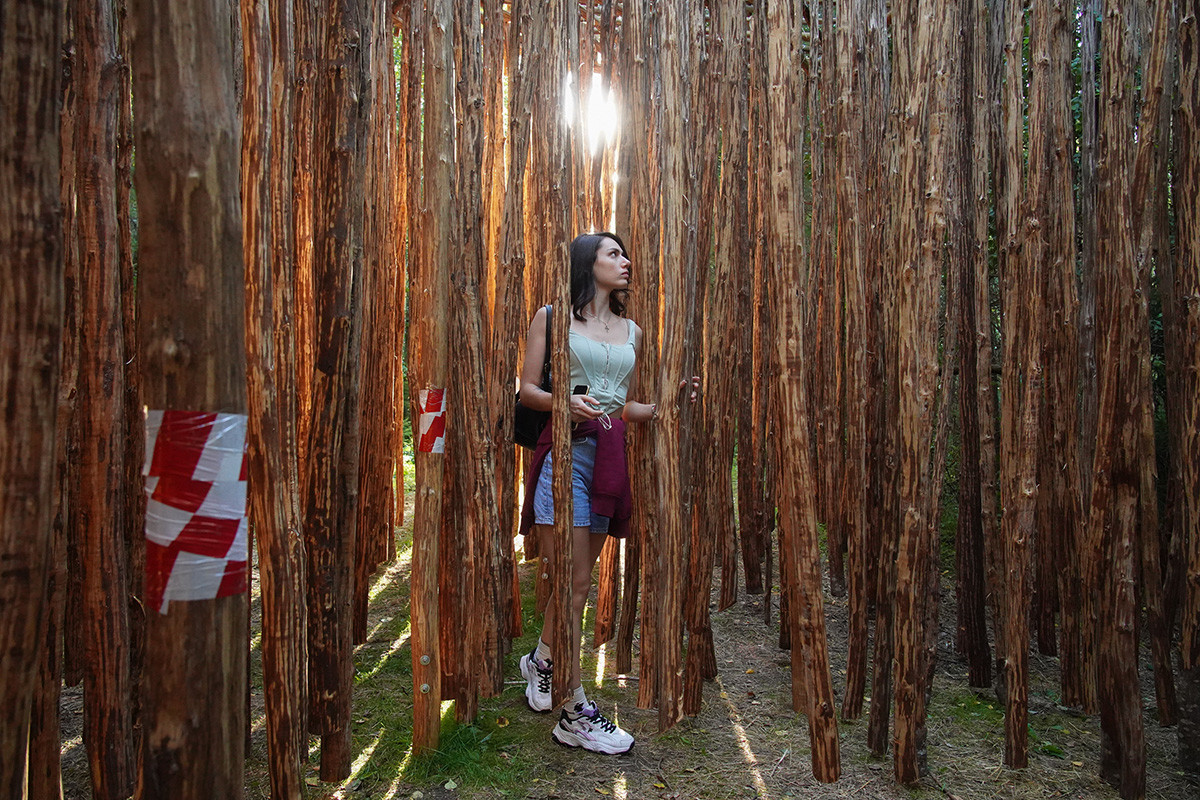 Young artists Vasilisa Prokopchuk and Evgeny Bragin presented the “upside down forest” - alder trunks suspended from a wooden grid. The authors say that in addition to the five well-known senses, people have an internal sense of orientation in space. Walking through an unfamiliar forest, you can easily lose your bearings - mix up the paths, not hear the sounds from the road. However, trusting intuition, a person is able to find a way out even from the most impenetrable thicket. The artists offer the visitor to pave their own way to get out of the forest. 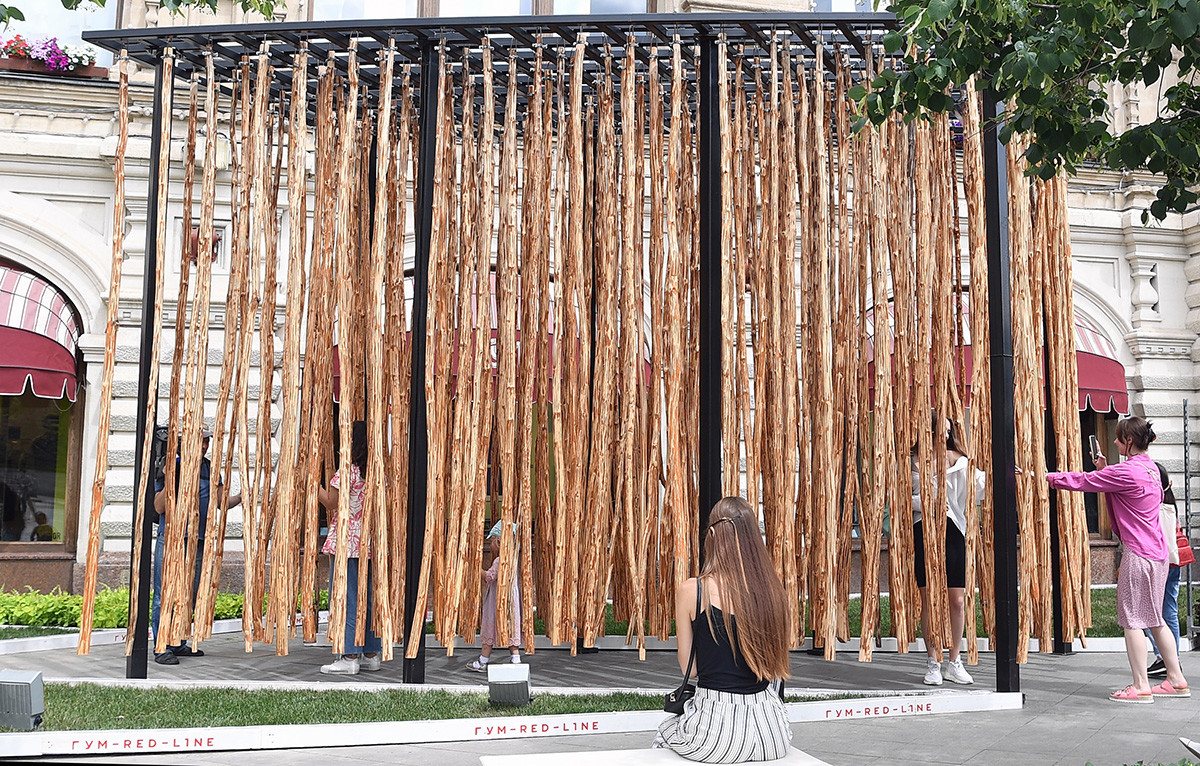 By the way, a mini-version of this work stands near GUM in Moscow this summer. It is not enough for an adventure, but is enough for taking cool snapshots. 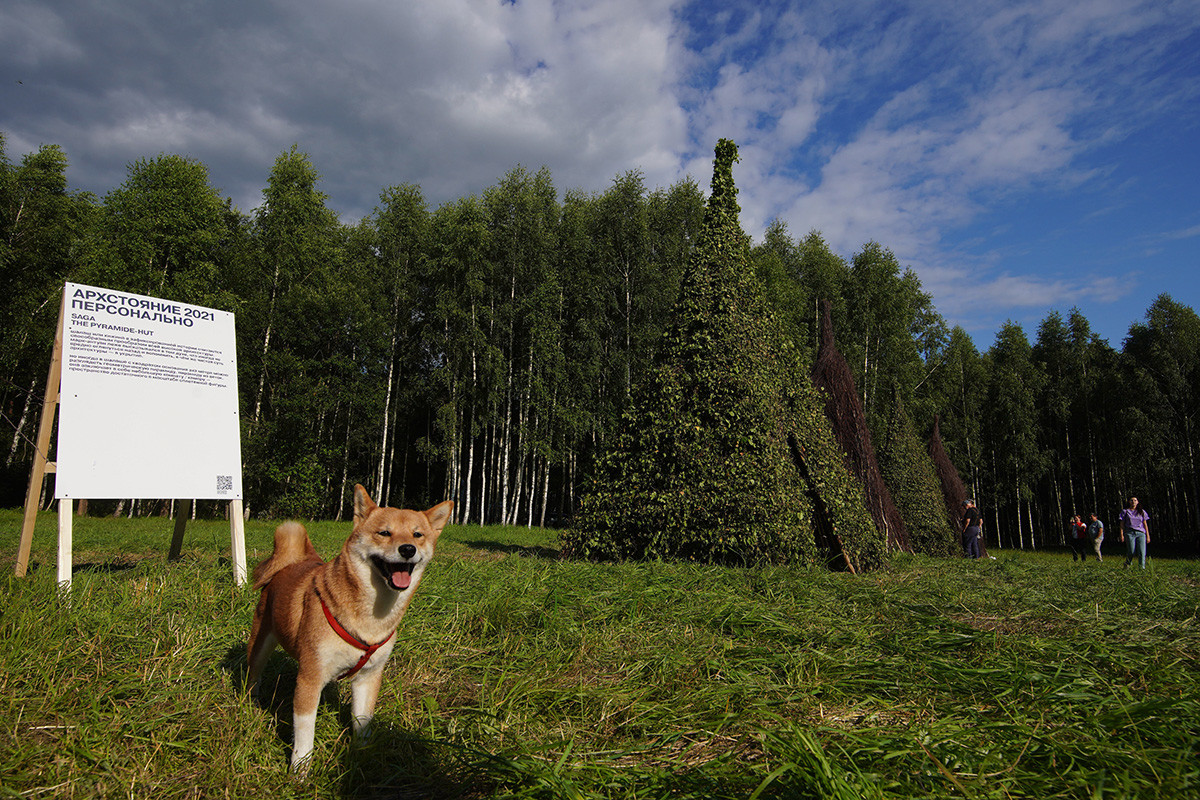 Another concept of modern houses for solitude is a series of ten capsule shelters for one person. Each such “house” is made by different artists and has its unique exterior and interior. Inside one of them, for example, is a white fabric that is used on the ISS. In the dark, you can see a hologram of a Martian storm on a white wall and feel like a resident on the Red Planet. In another wigwam hangs a cocoon of threads and glass “suckers” - a symbol of “pupation” as a kind of psychological protection. In the third hut, you can find a well with fish and fallen leaves. 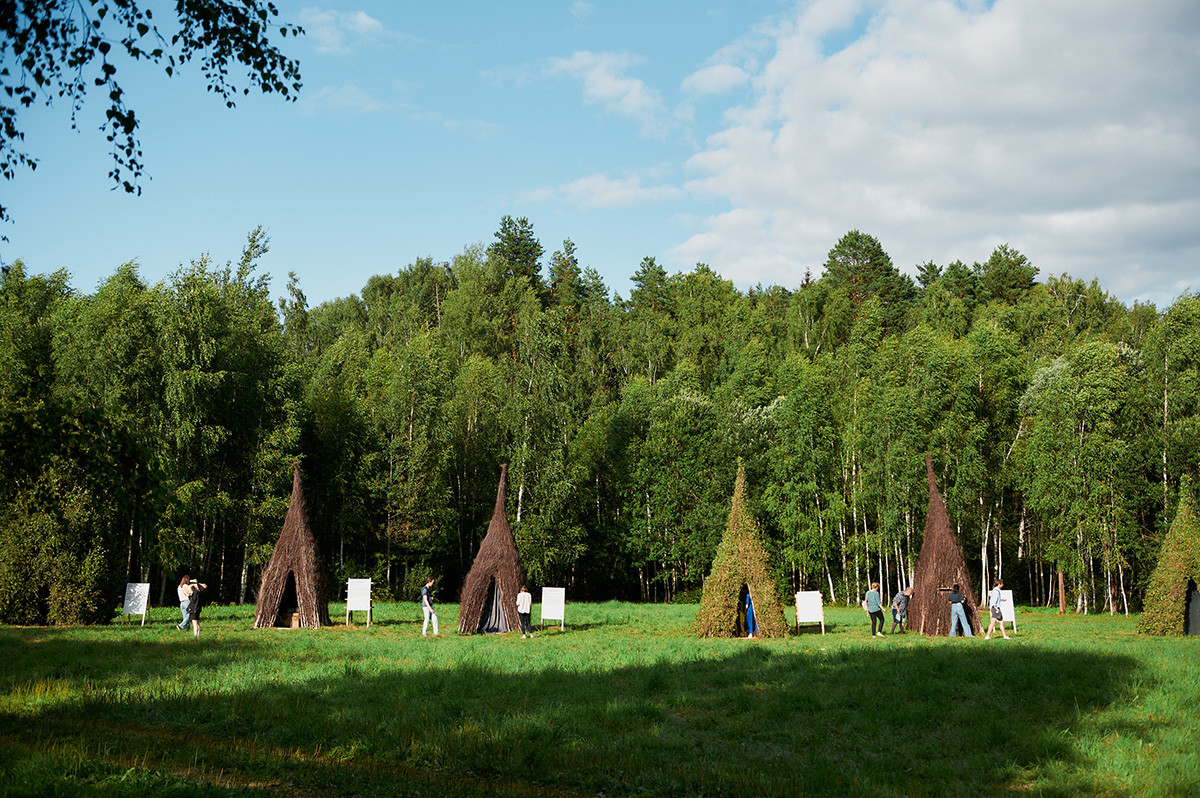 Artists say that looking into this well, you can think about the connection of time and space. So, there’s something to think about while wandering through this forest meadow. 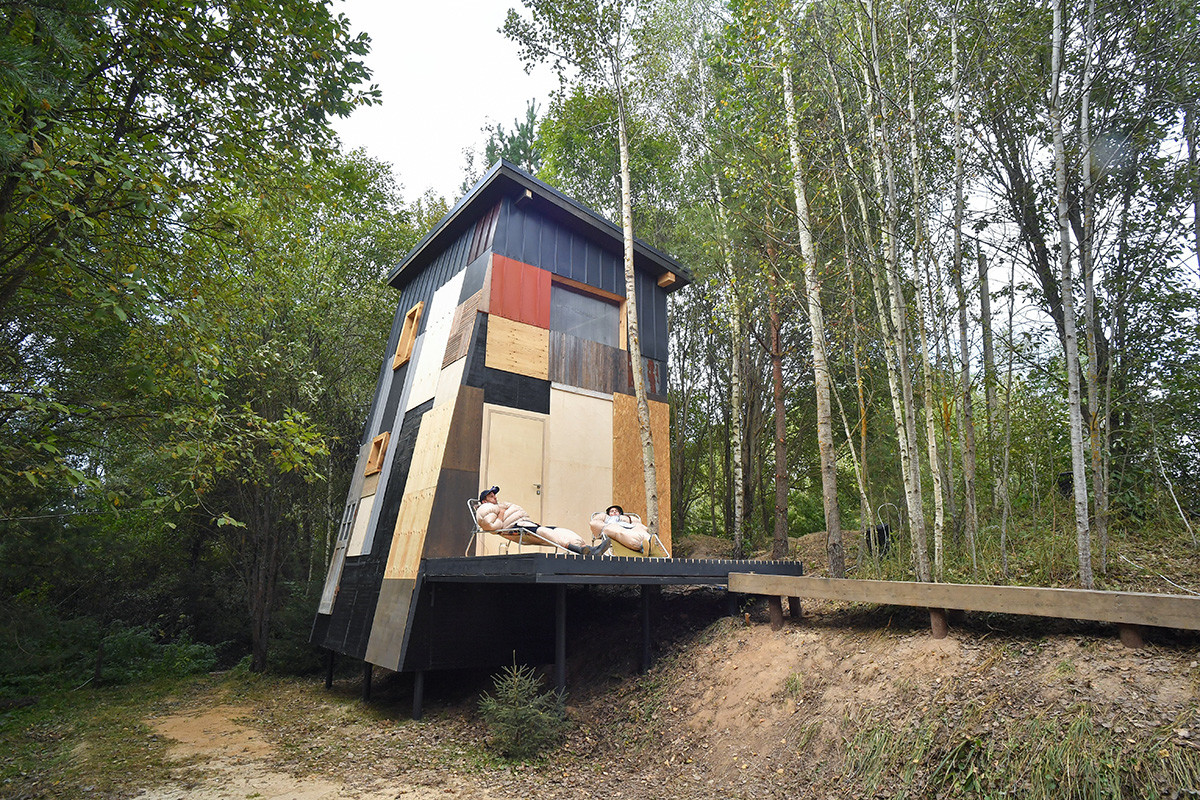 And this art object remained from last year’s ‘Archstoyanie’. In 2020, artists explored laziness as the engine of world culture. Some objects were also devoted to home. For example, this mezzanine house. It was built by the Moscow street artist Alexey Luka from materials found by him in the surrounding areas: fences, roofs, platbands. Inside, there is something resembling an artist’s workshop. Outside, you can lie on a deckchair and be lazy. 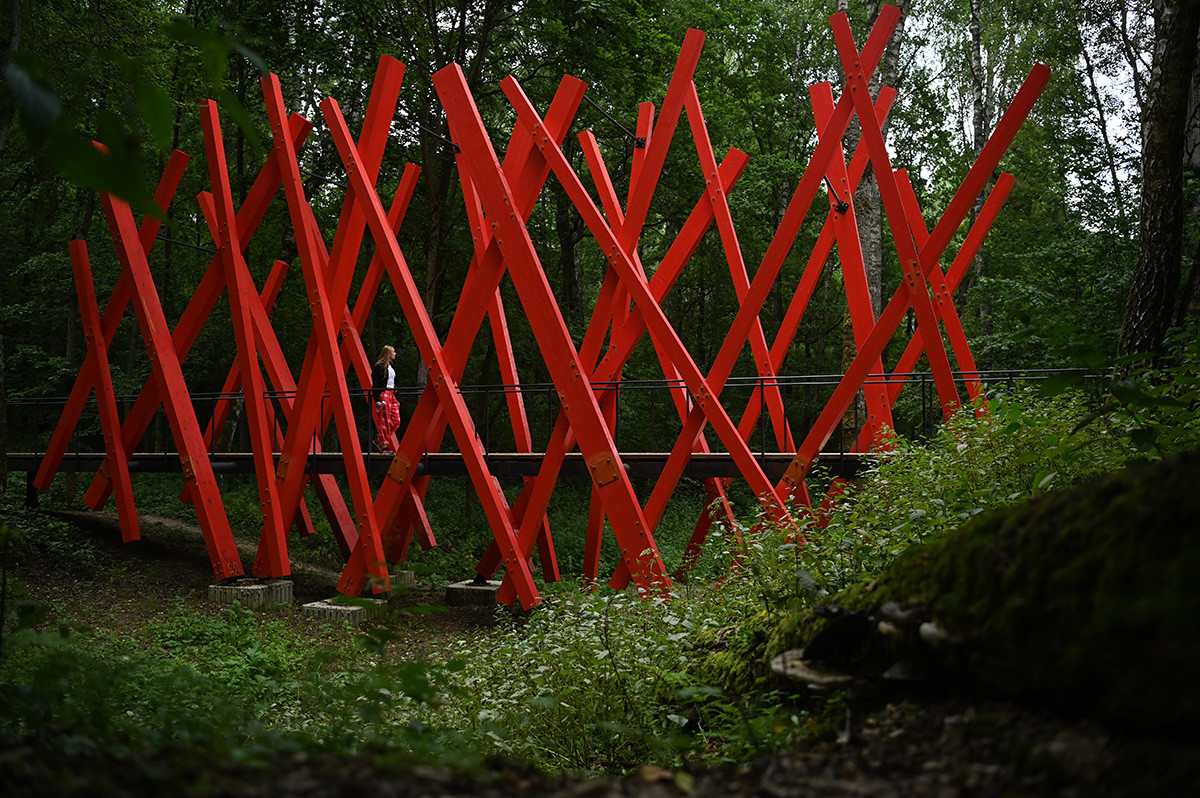 ‘Red Forest’ is not only an art object. It also has a very practical function: This is a bridge to cross the ravine and find yourself in another part of the park. The installation by the artist Igor Shelkovsky is a series of red six-meter bars that sharply contrast with the surrounding landscape at any time of the year. 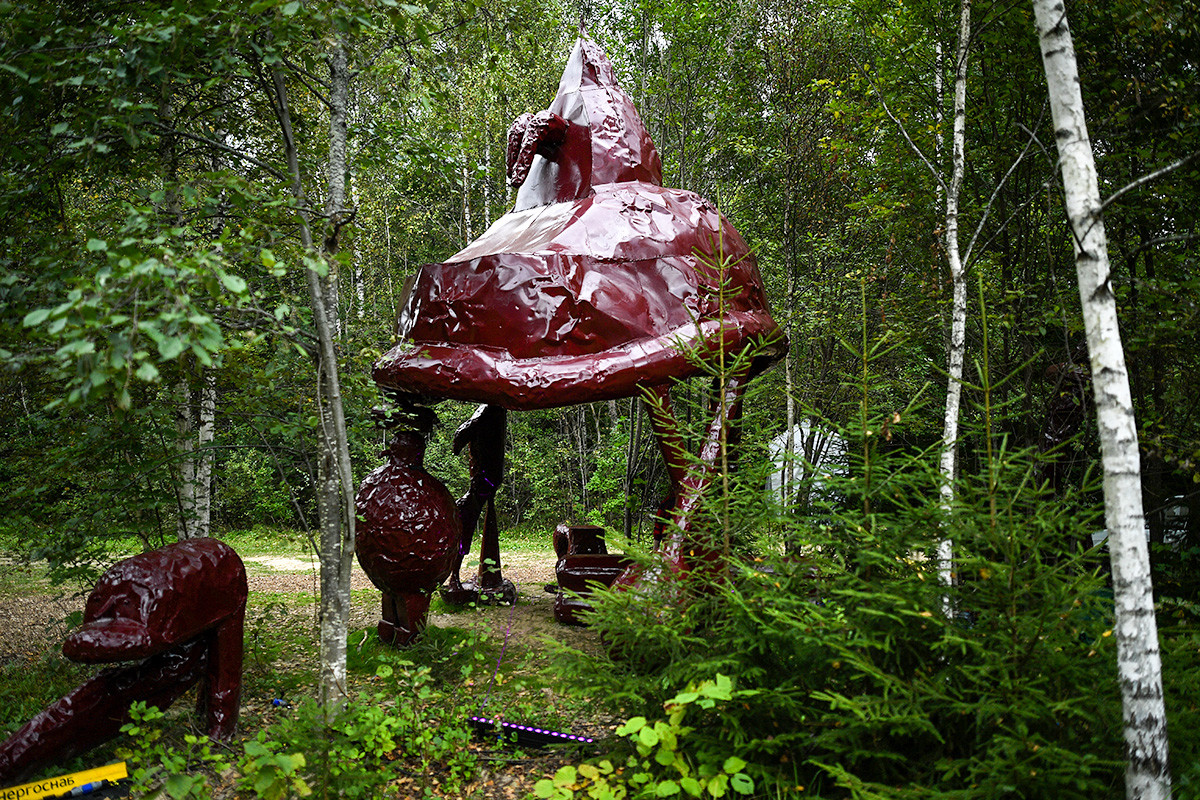 A pavilion or ruins? The installation of Ivan Gorshkov has attracted a lot of interest. This art object is made of iron and is inhabited by mystical “forest characters”. The artist suggests using this gazebo as a rest stop.