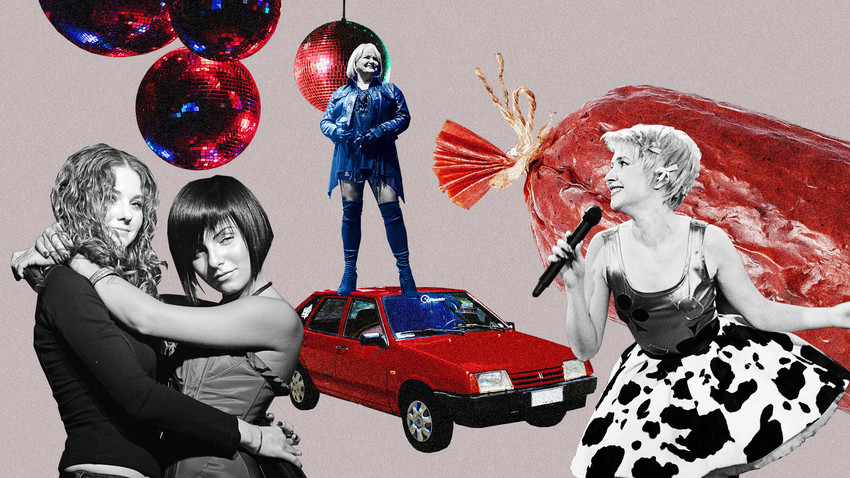 We bet you know this one! This Russian girl band arrived on the scene in 1999 and was seen as rather scandalous at the time since the duo pretended to ooze with romantic passion for one another, although they later moved away from this image. t.A.T.u used to sing in both Russian and English and became the first Russian girl band to achieve global fame. In 2003, they took the bronze at the Eurovision song contest. Nowadays, the girls have turned into ladies and are more engaged in their personal lives than music. Here is what happened.

This band, whose name translates as “Glowing,” was one of the first Russian girl bands. Founded in 1995, they are a classic pop band that sings about relationships and their personal lives. There were around 20 participants in all different compositions over the course of the band’s history, but the general character of their music has not changed. If you’re in the mood to dance, definitely give Blestyashchie a try.

One of the first Soviet bands, Kombinatsiya (“Combination” in English) was founded in 1988 in the city of Saratov and soon became popular throughout the former Soviet Union. And it is no surprise why: two pretty girls having fun and singing humorous songs about shortages of goods, small salaries and emigration— topics that everybody in the region could relate to at the time. After 10 years, they stopped recording new albums and turned their focus to their solo careers. However, you can see them at retro parties from time to time.

The band, whose name means Lyceum, was extremely popular in the mid-90s. Unlike other girl bands, the leaders not only sang but also played guitars—and played them well. One notable song about failed relationships, Osen’ (“Autumn”), came out in 1993 and still is played on radio stations today.

The band Strelki (“Arrows'' in English) had lots of soloists over the period from 1997-2006, but their songs about men committing infidelity and betraying friends were very popular. That said, the band actually broke up because the women left too often, and many of them now perform solo in Russia.

The three girls in this band all took part in a Russian talent show called “Fabric of Stars” in 2002, and the show’s producer decided to create a band with them. They primarily sing songs about love that are based on simple and clear melodies.

You can still hear them at just about any retro disco today, and Mirage was one of the most popular bands in the late Soviet Union. The rhythm in their songs is so infectious that you simply cannot stop dancing! Their songs were written in classic pop style and accompanied by electric instruments. The vocalists changed from time to time, and many concerts were performed with auto-tune, which is why the audience didn’t particularly notice when the singers changed. Some of the singers went on to become solo musicians, and old Mirage songs are still famous across the country!

Tiny skirts, tight tops, bright makeup and electro pop—Reflex is a model band of the 2000s! For Russia, this style was new at that time, which is perhaps why this duo became so popular from the very beginning. The main soloist, Irina, was even presented an award “For Merit to the Fatherland” in 2017.

This brilliantly creative quartet—whose name means “Hummingbirds”--first appeared in Leningrad (now St. Petersburg) in the late 1980s. Unlike many other pop bands at the time, Kolibri actually focused on their music, played smart and ironic songs and didn’t bother pretending to be cover girls. They sometimes performed parodies of other musicians—in a song called “Autumn Yellow List,” for example, they troll Russian pop music using weird illogical phrases and rhymes.

Russian funk from St. Petersburg in the mid-90s in which three ladies in bright costumes performed crazy and humorous songs as an alternative to ordinary pop or rock music. They were never as popular as other girl bands, but they won lots of fans among people who wanted “hooligan” music.