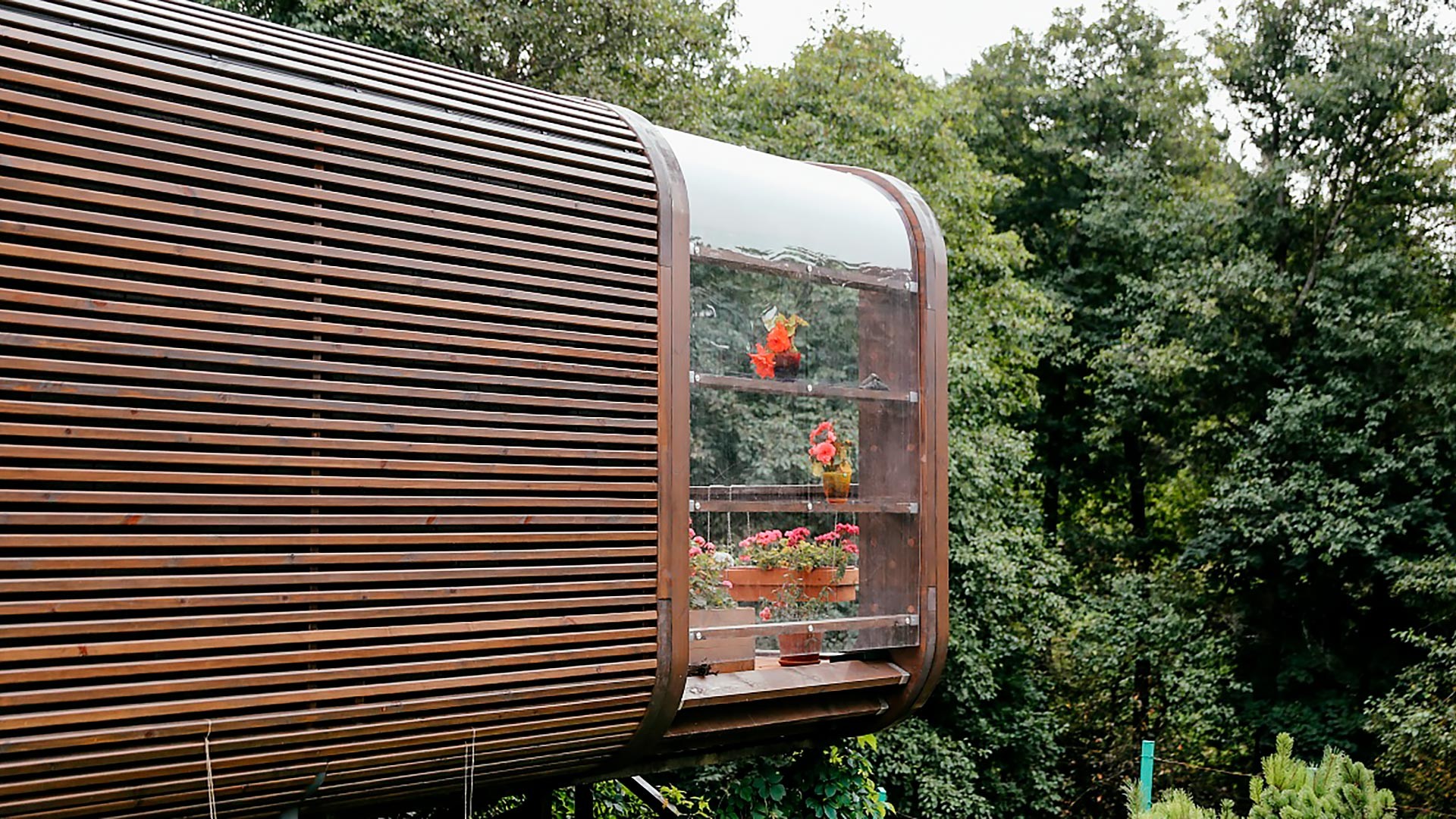 DomBro / ARCHIWOOD
What do you imagine when you hear the words ‘Russian wooden architecture’? Probably old churches and village huts with ornate carved window frames. Well, that’s all changing. Here are some stunning modern Russian houses predominantly made from wood. 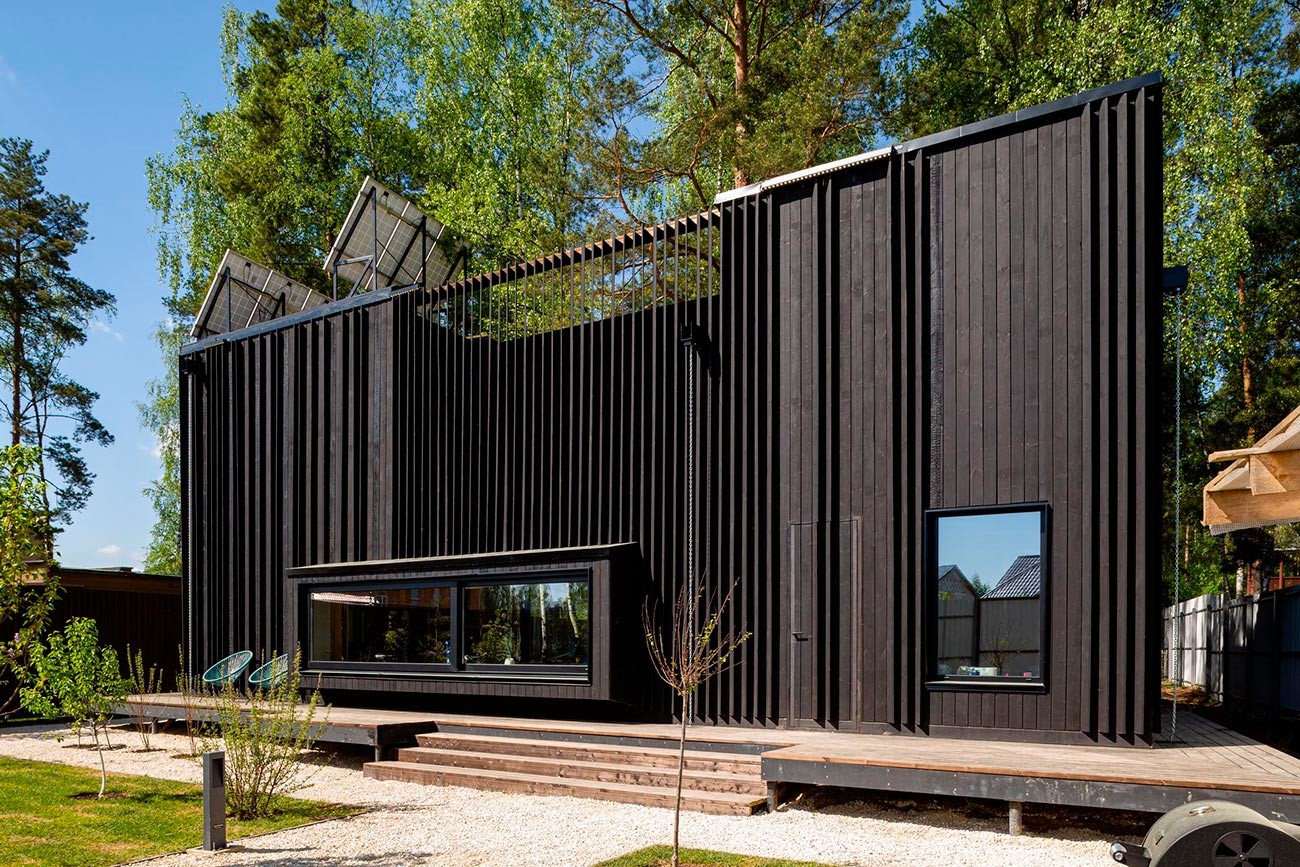 One side of this country house, built by Alexander Motkov according to the architectural design of Rustam Kerimov, fits organically into the forest, while the other side has a nice yard with a garden. 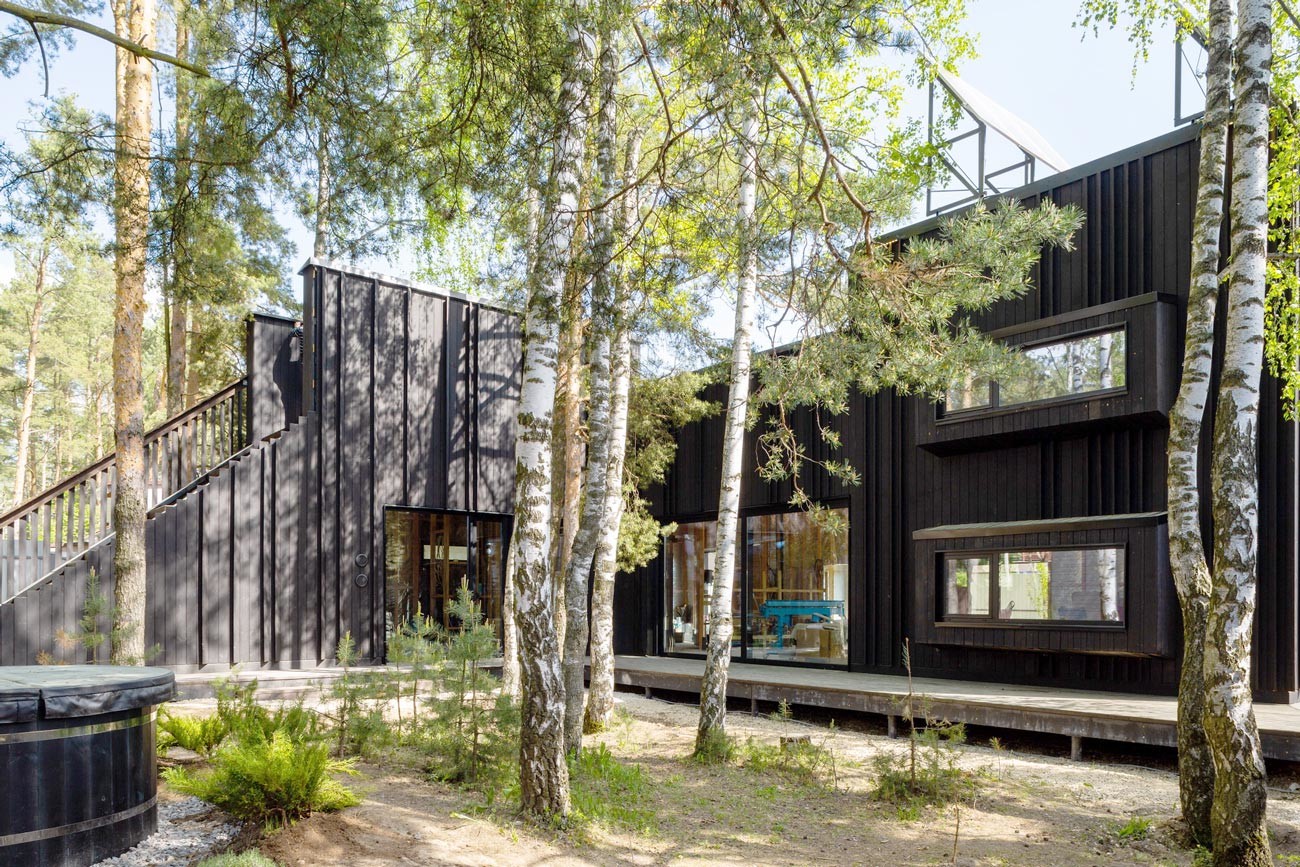 The building doesn't have a pitched roof that’s common for Russian wooden houses. Instead, it has a functional flat roof with stairs leading there. Sleek and fashionable. 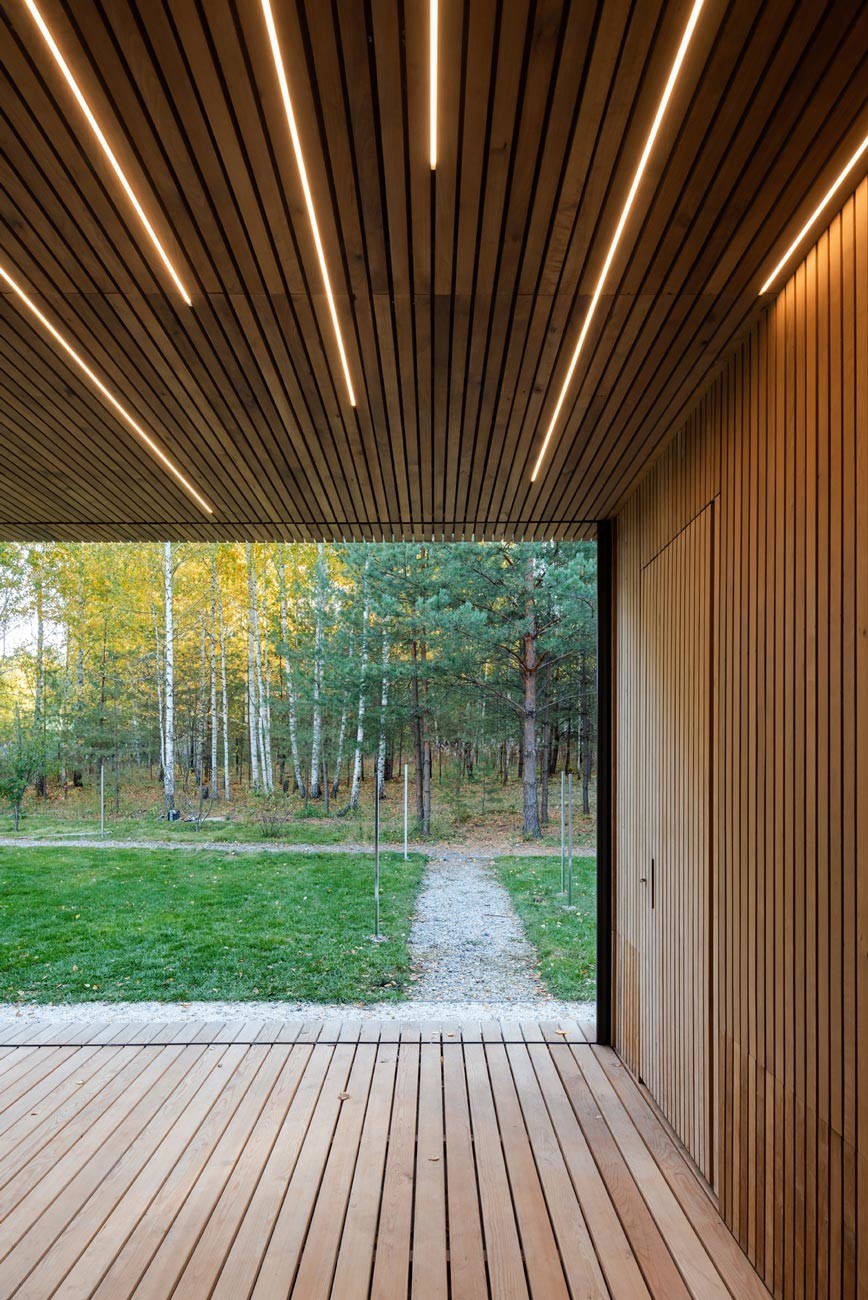 At the roadside this house has a 'closed' facade, while the other side has huge glass windows that create the feeling of an open forest. 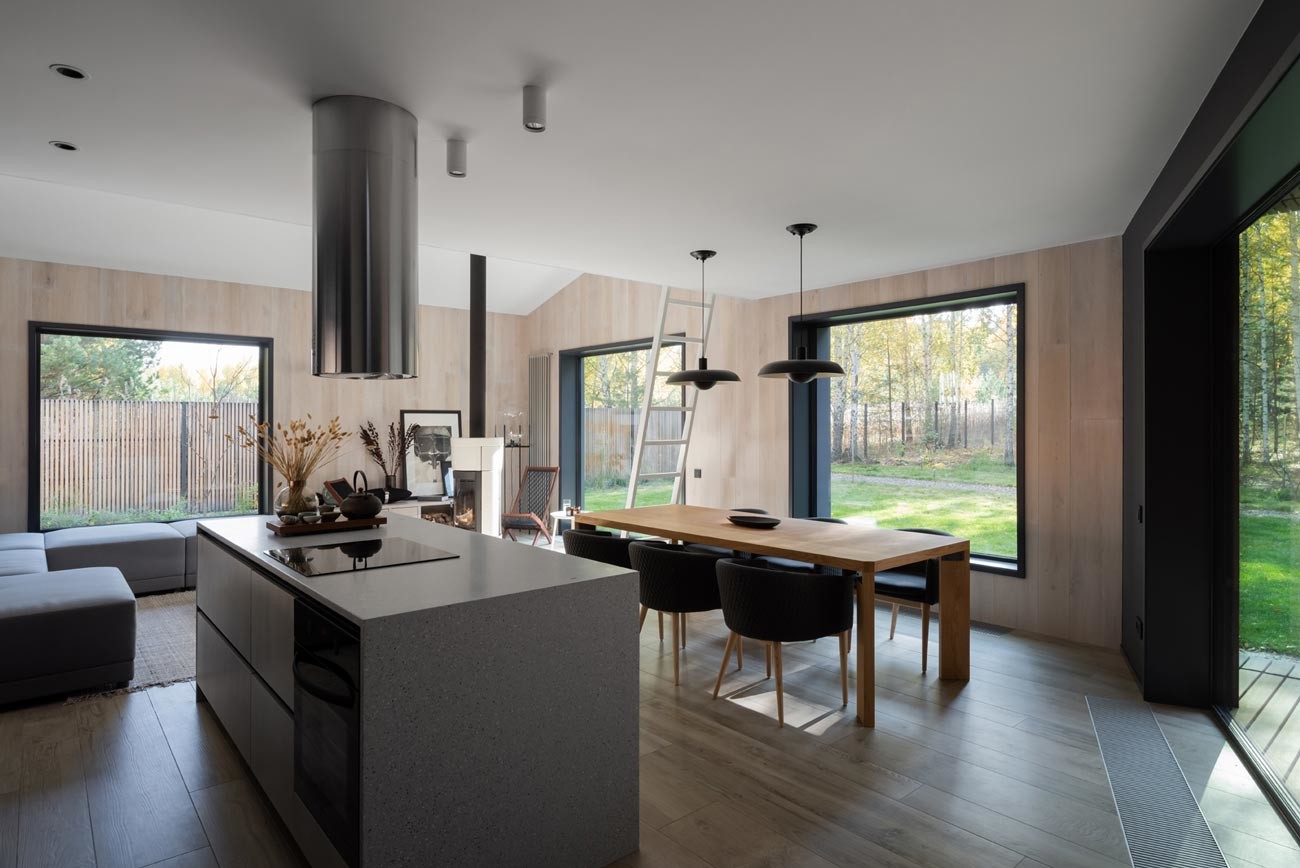 The A61 Architectural bureau that built the house used both birch and fir trees to give a diverse visual appeal, while inside there’s an asymmetric but very functional space.

3. Banya and guest house in Kavgolovo 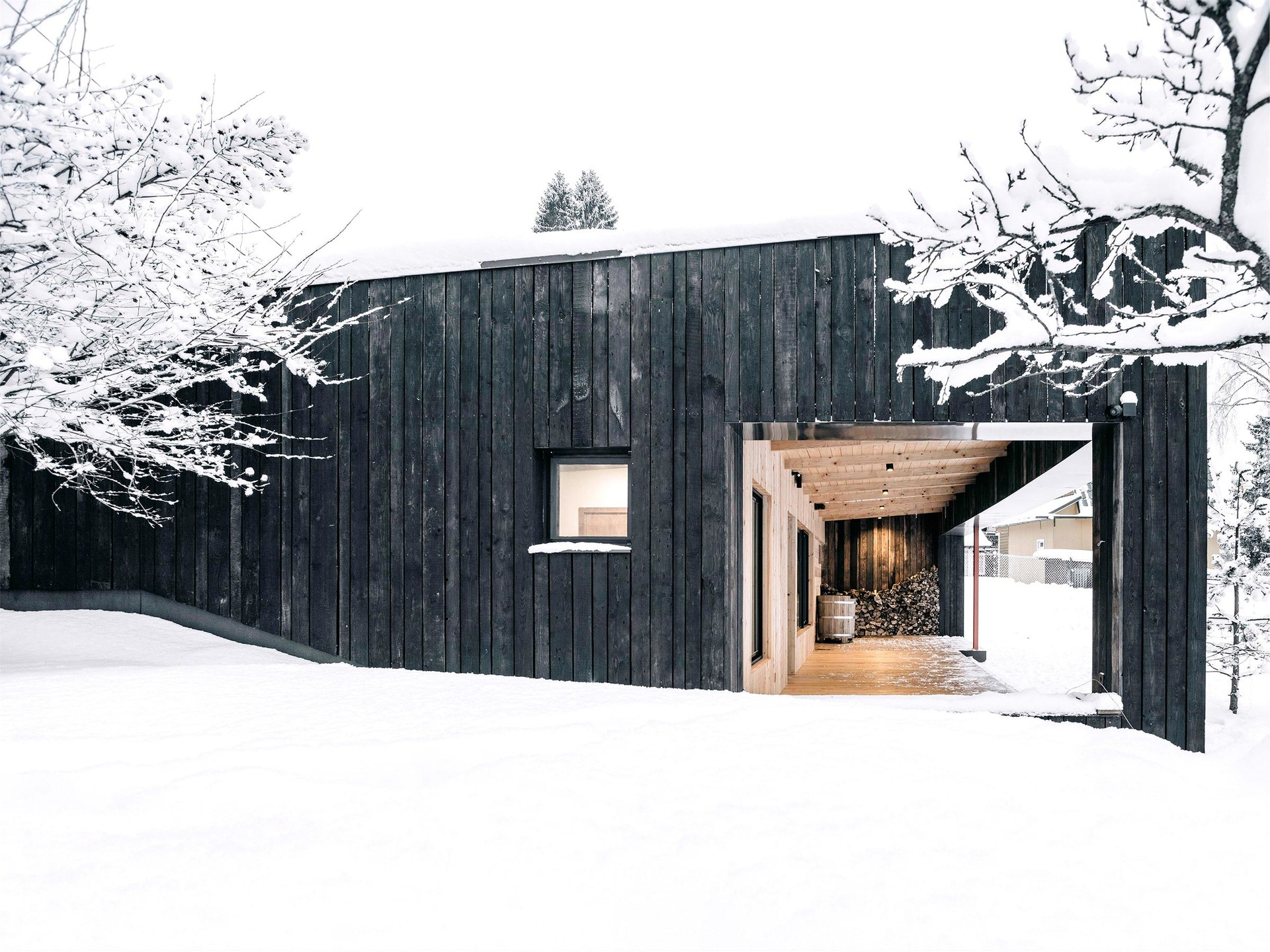 This remote venue outside of St. Petersburg was constructed by CHVOYA architectural bureau (in Russian 'хвоя' means pine needles). 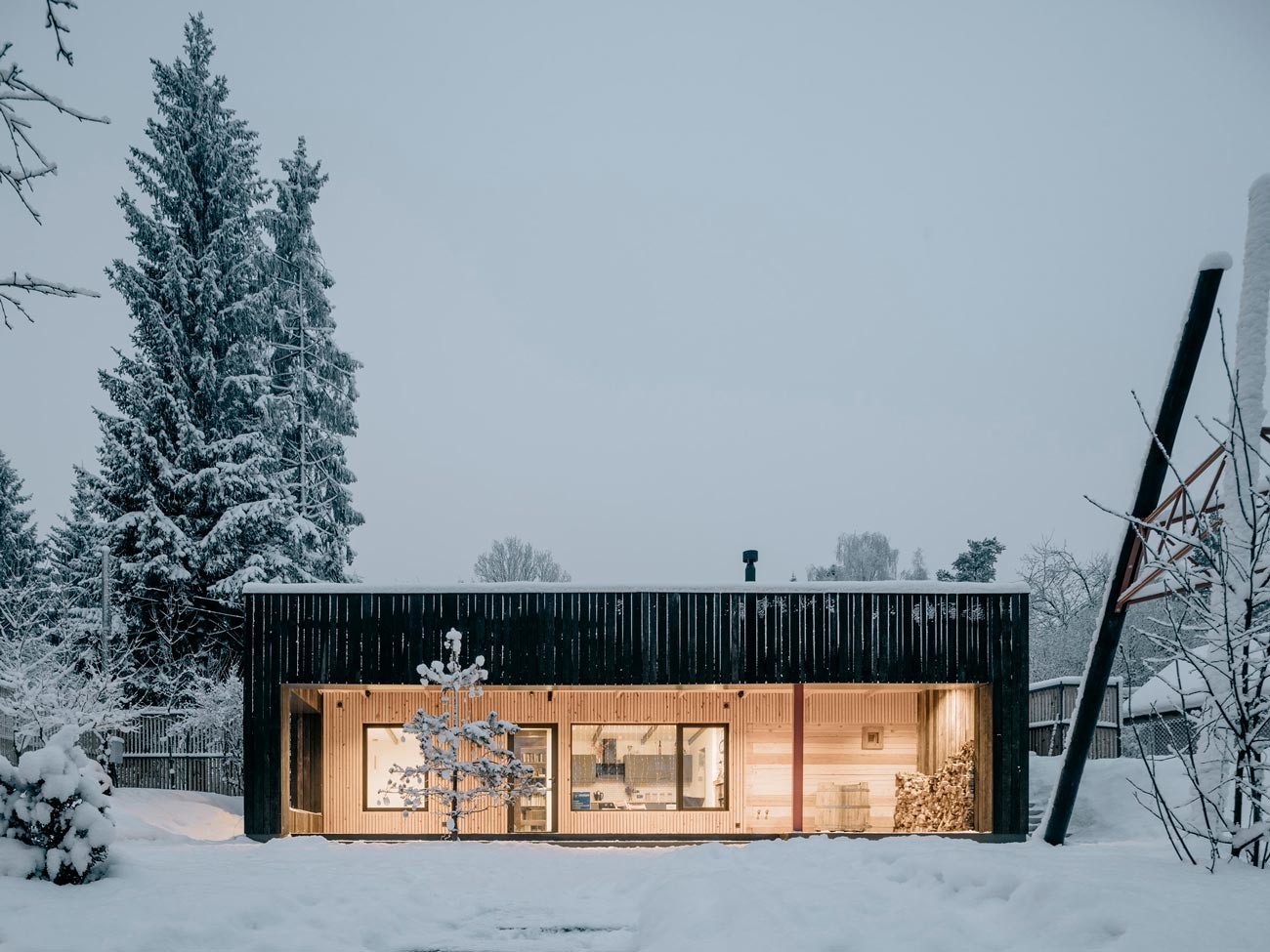 It sits on a hillside and has stairs that lead to a lake. That's probably not how you've imagined a Russian steam bath. 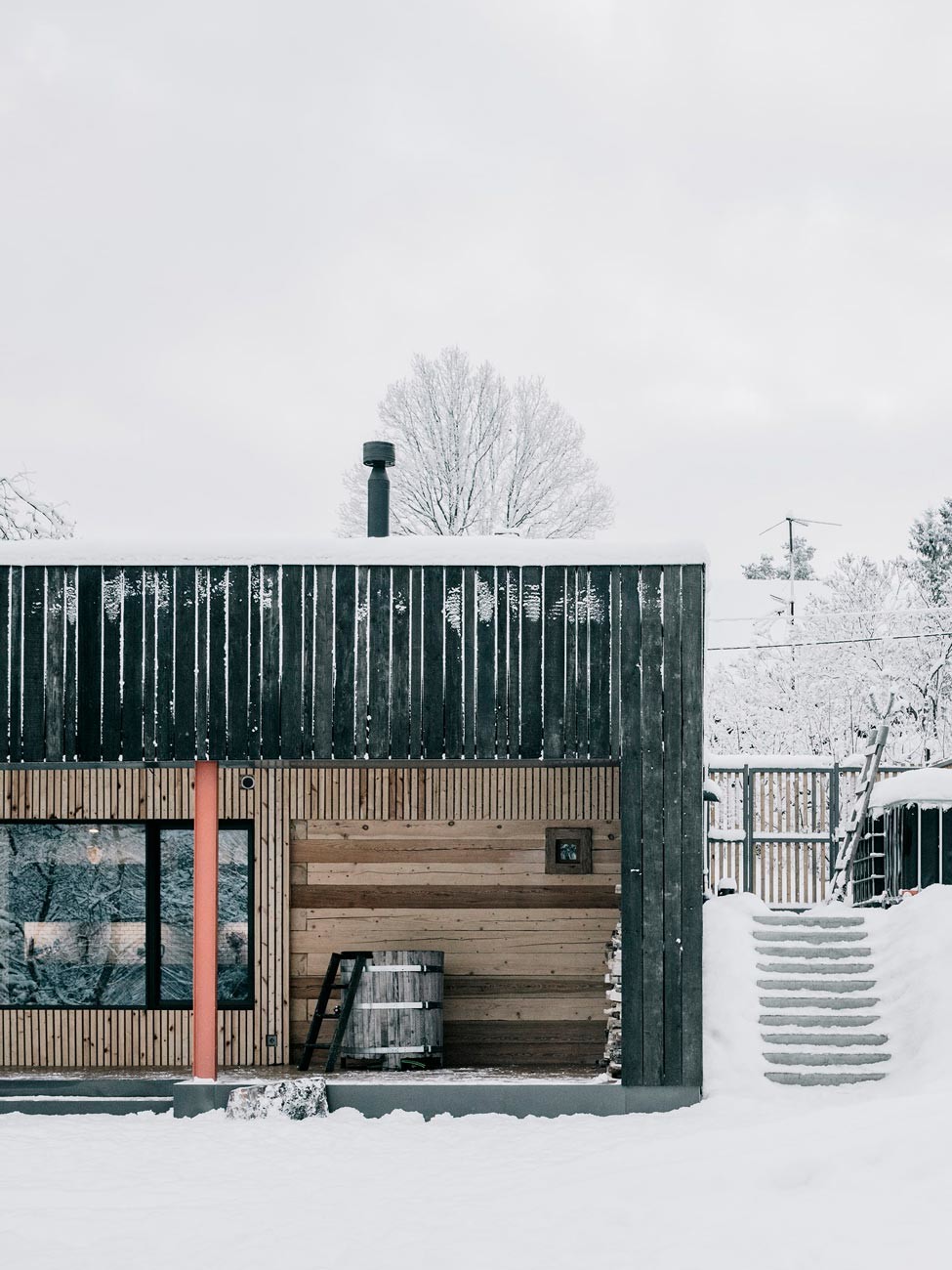 The architects played with natural light and the alternation of light and dark wooden sections. 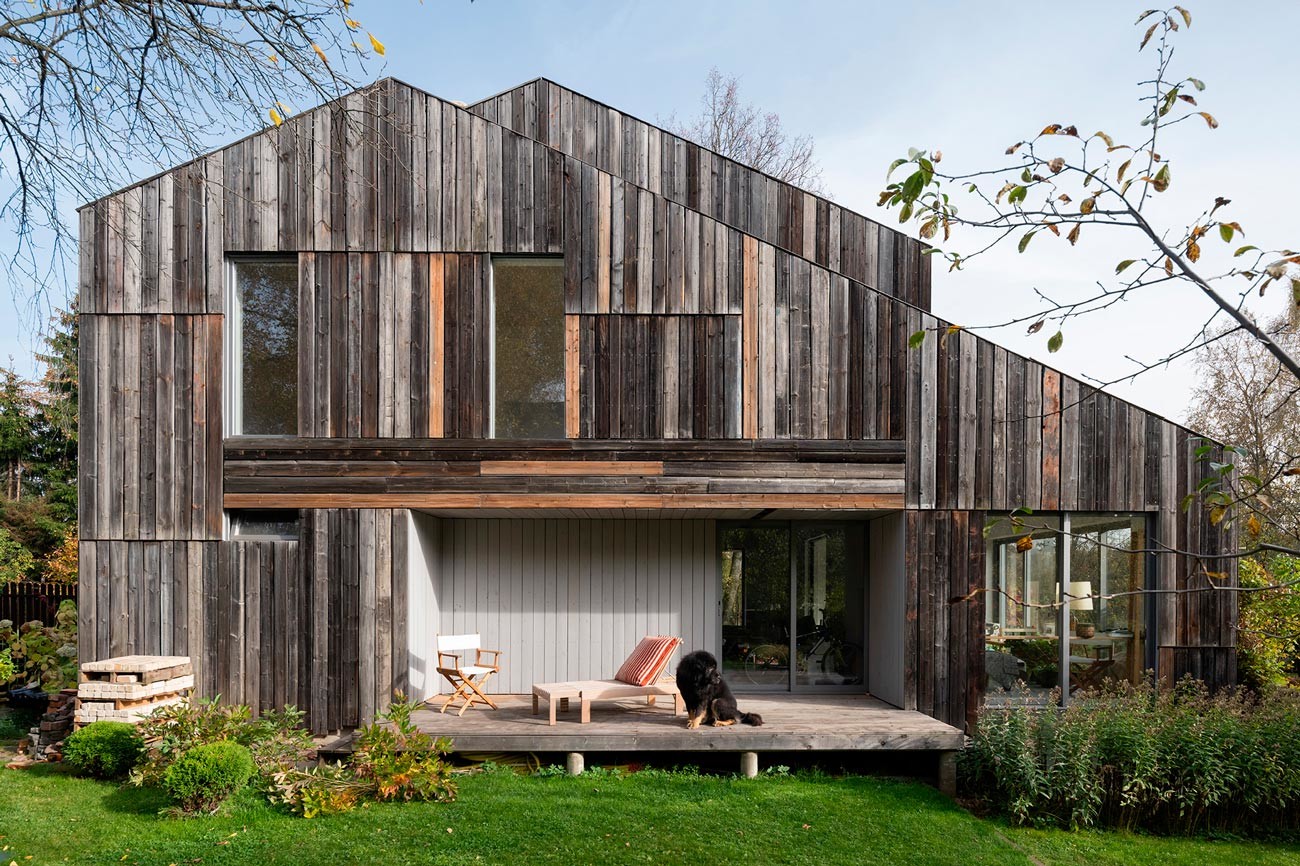 This house in the Moscow Region looks exactly how a barn or shed in Russian villages used to. 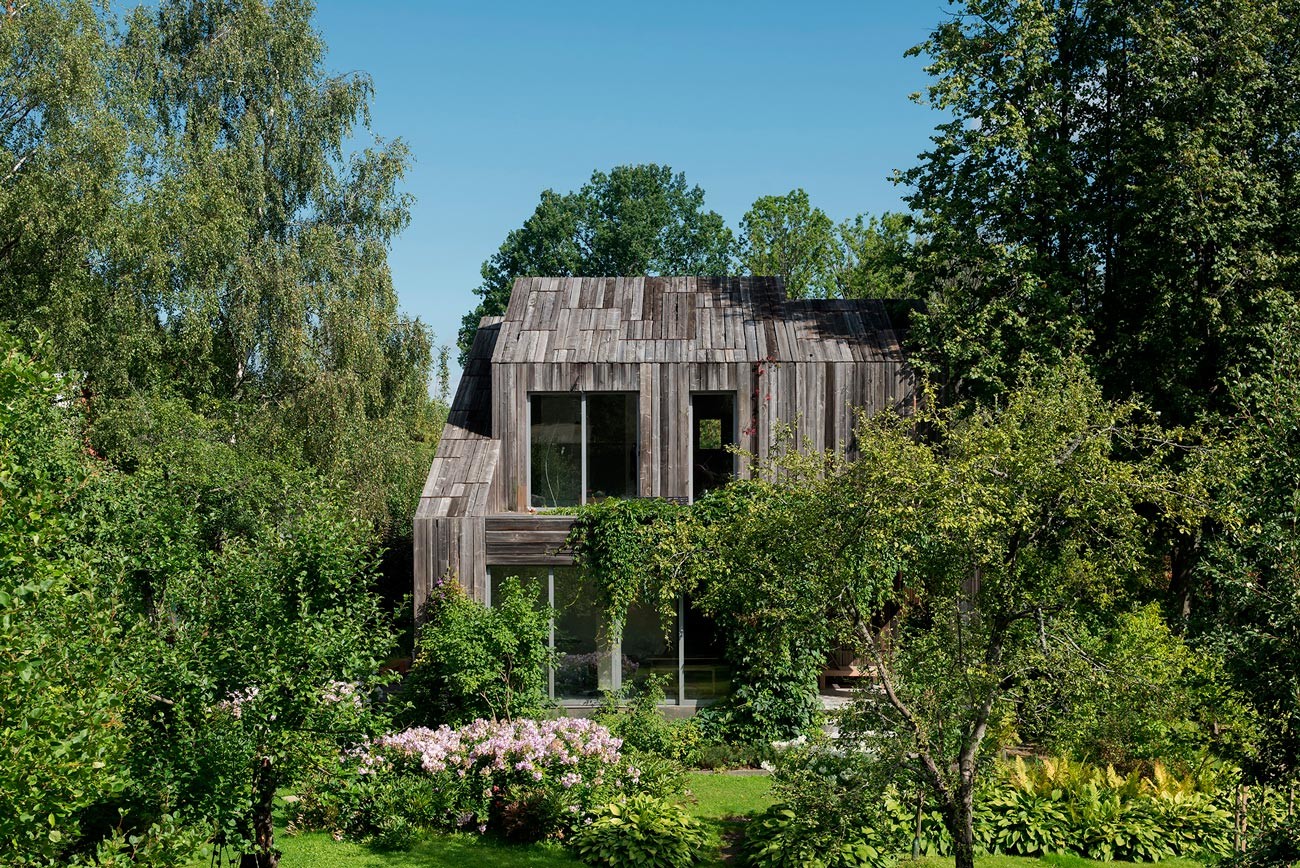 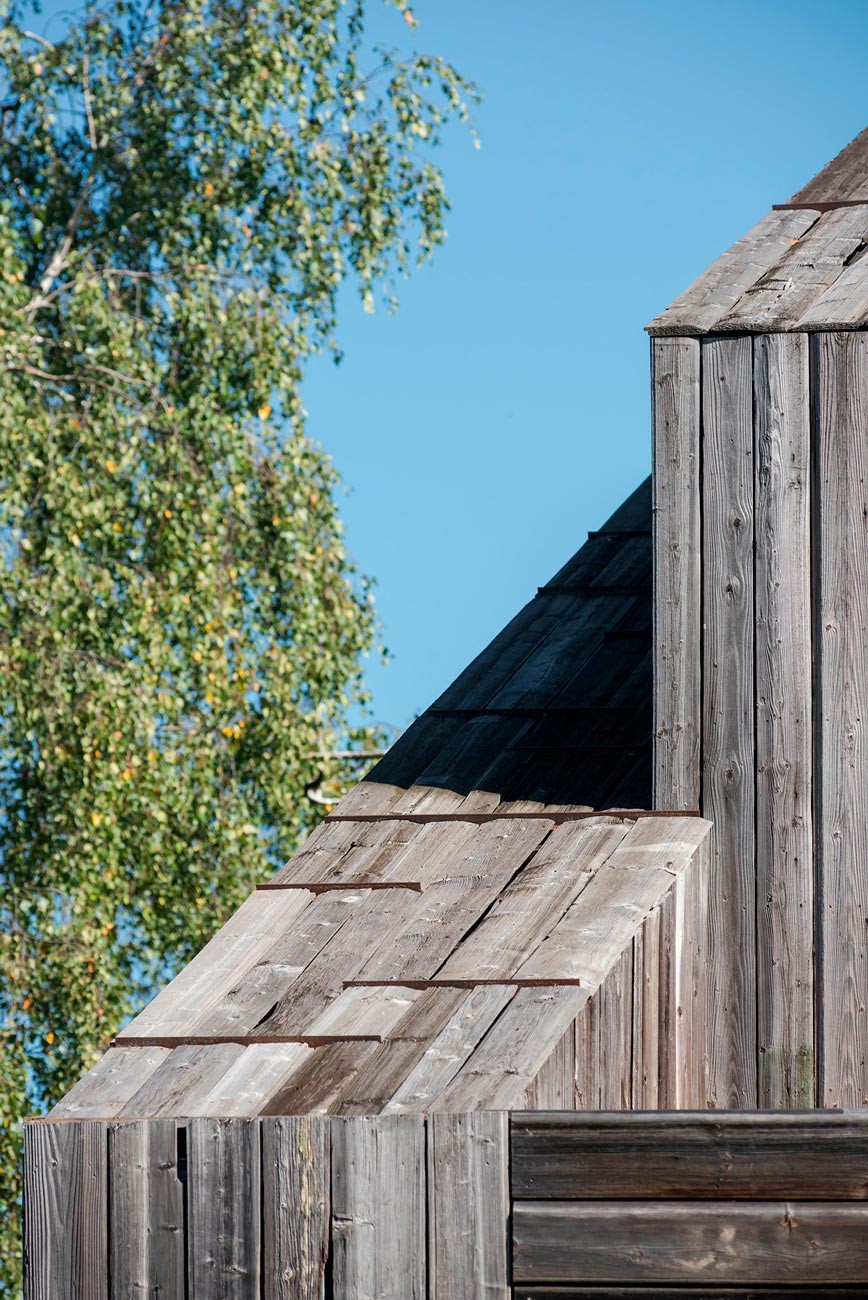 The design blends the house into the natural surroundings. 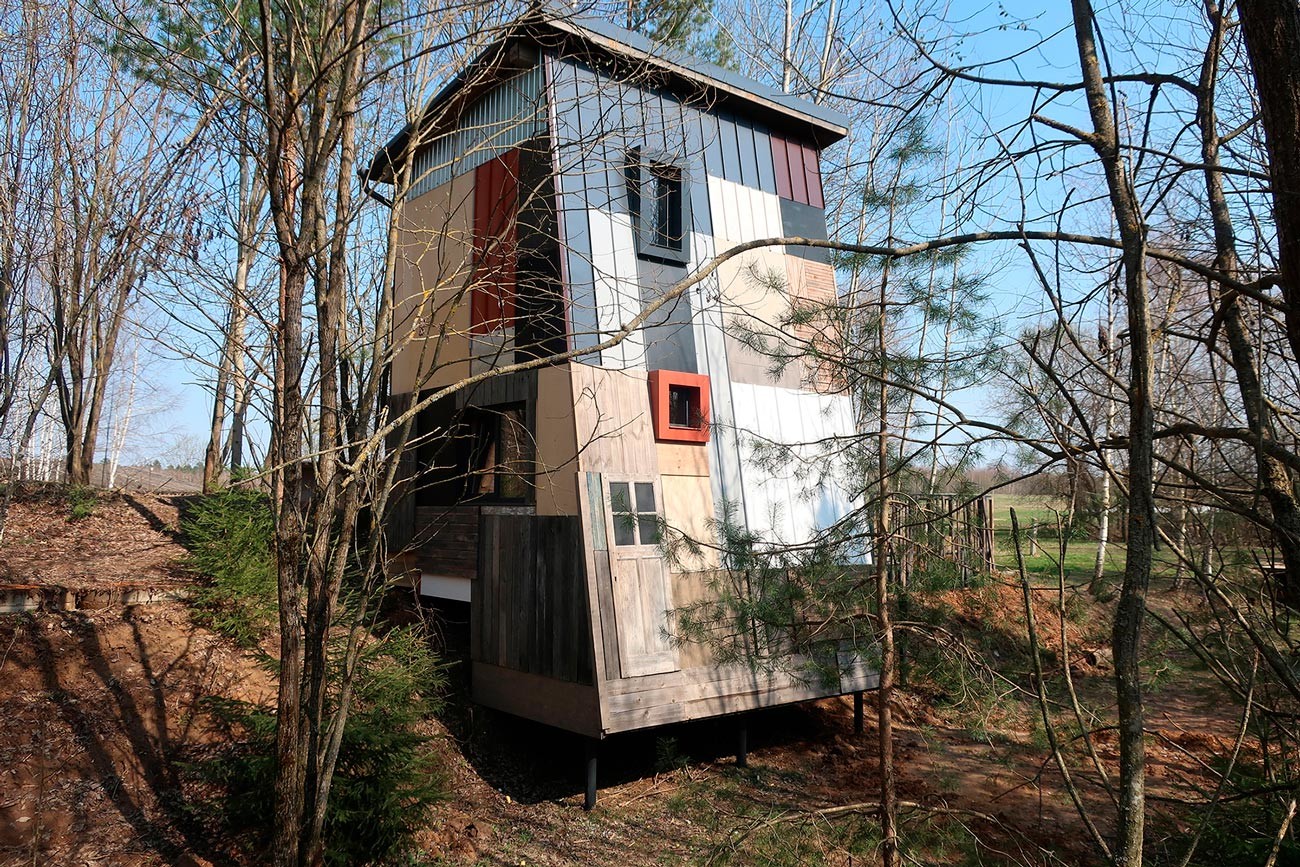 This weird construction at Nikola Lenivets land art park in the Kaluga Region looks like a sort of birdhouse, situated in the middle of the forest. 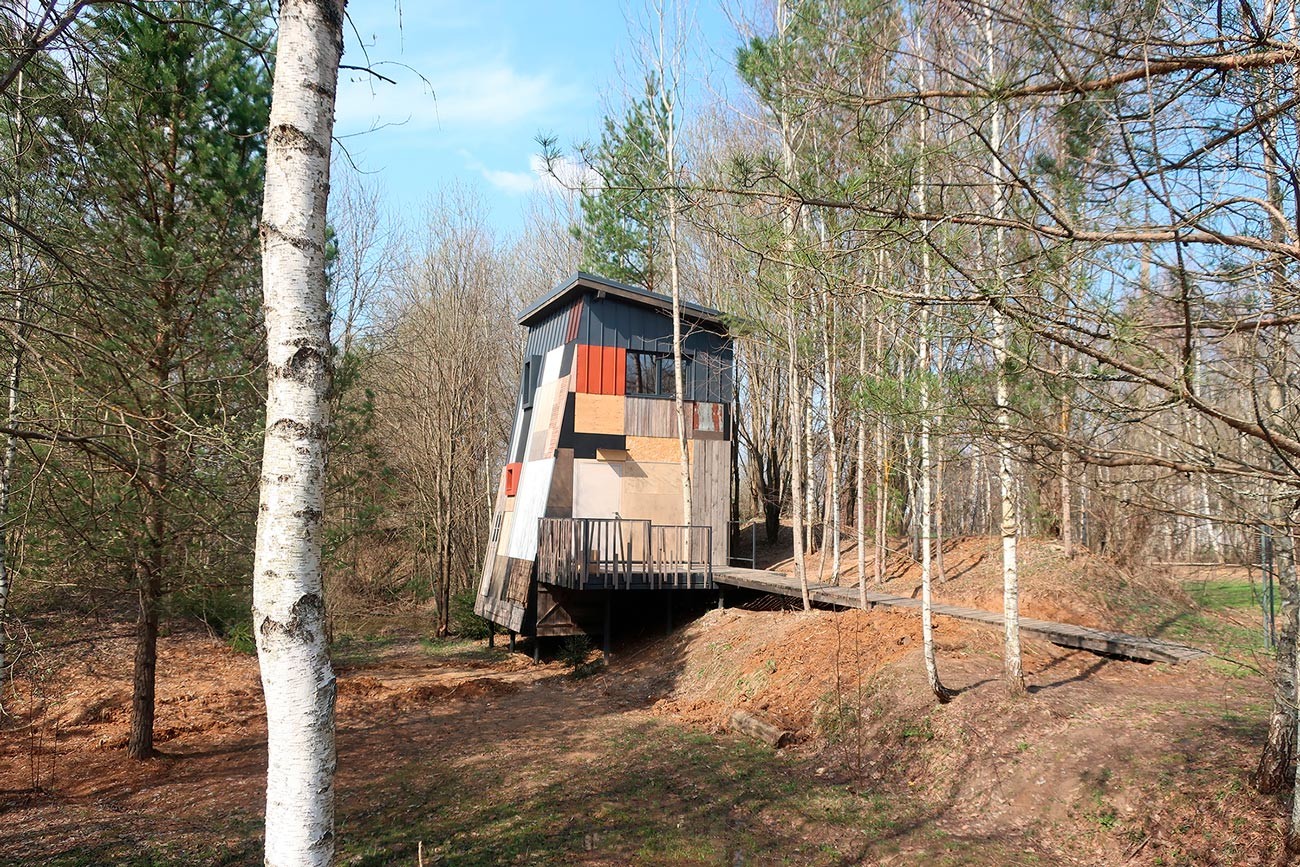 Built by architect Alexei Luka, this is a living art object that anyone can rent. The exterior design is deliberately messy and combines multiple textures that are replicated inside. 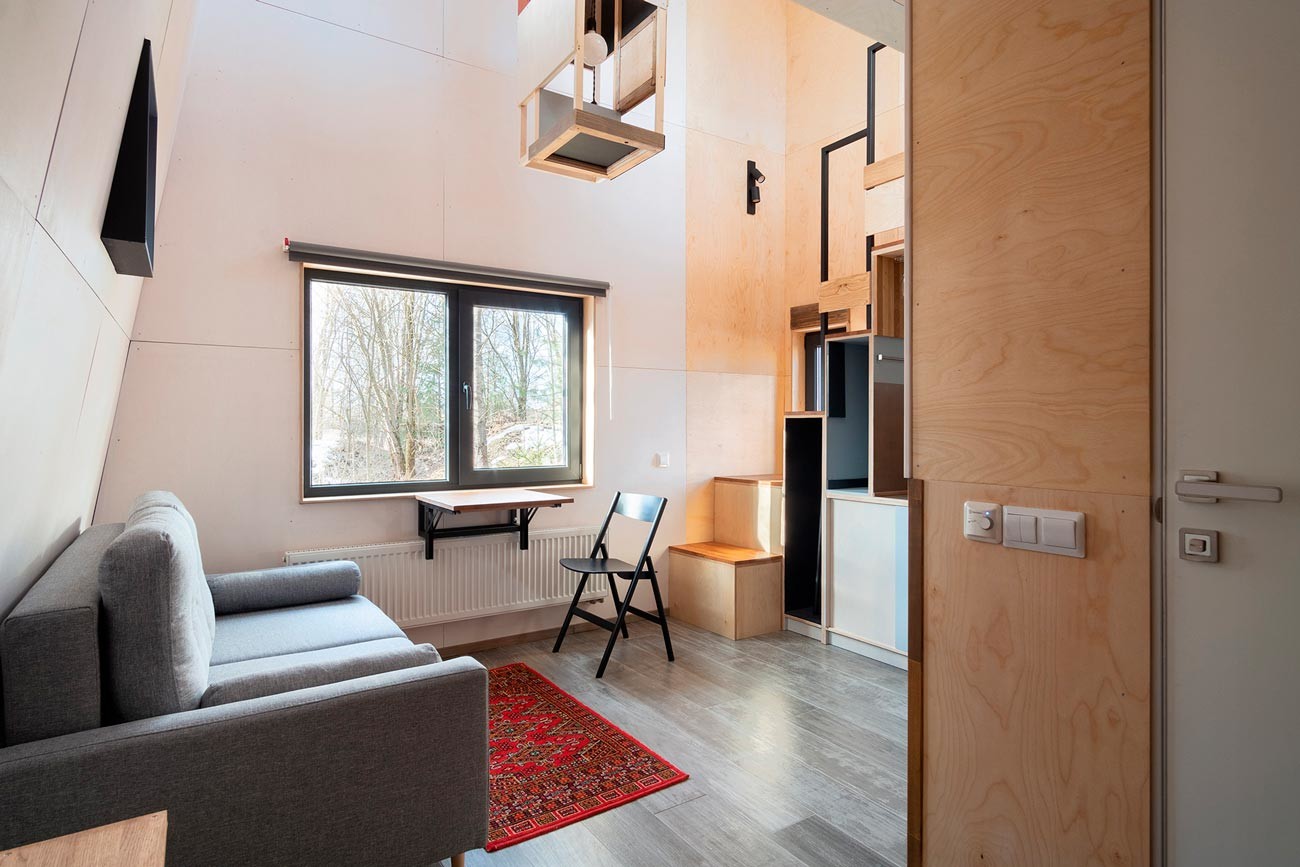 However, the interior looks like a fashionable glamping site.

6. House on stilts in a pine forest 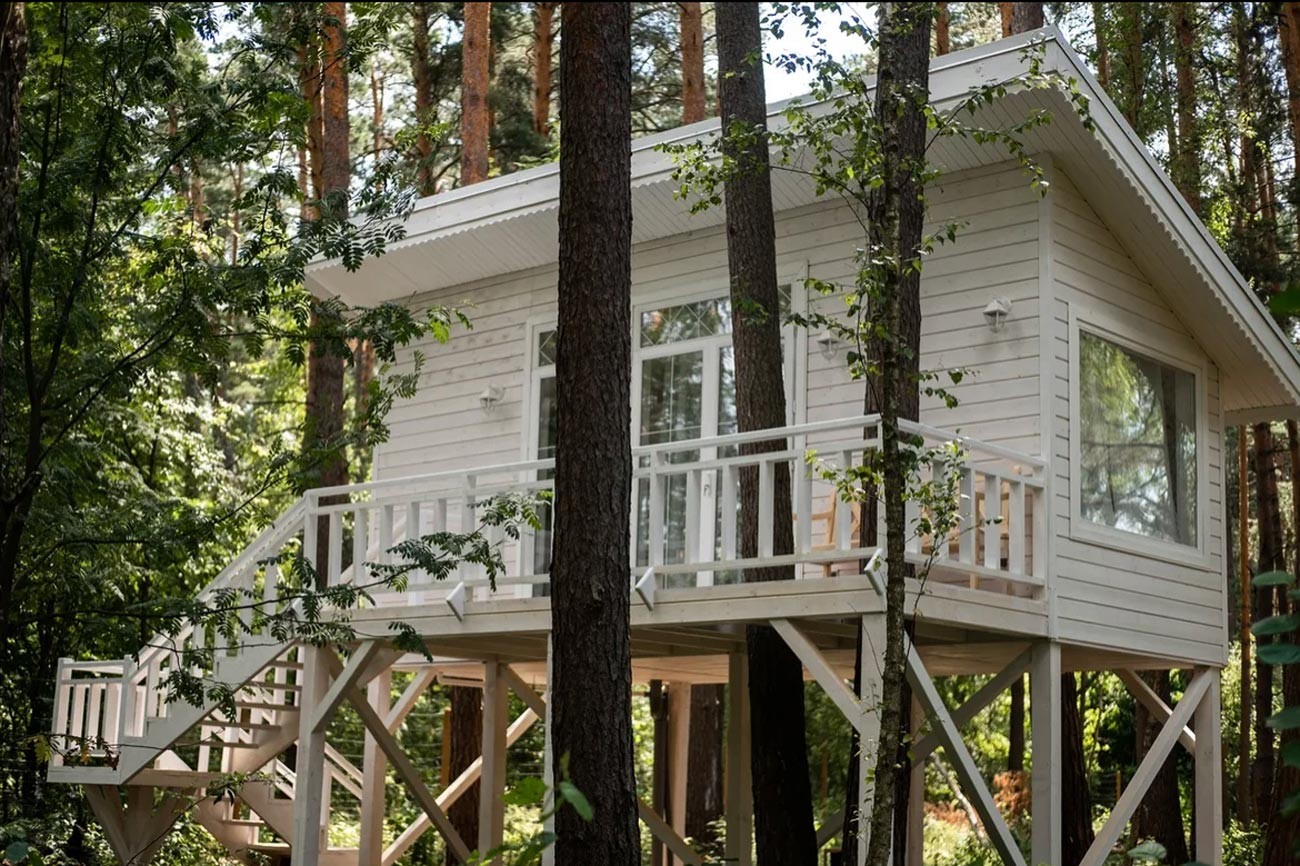 Who hasn't dreamt of building a treehouse? A group of architects - Natalia Amirova, Dmitry Tselishchev, Yelena Makarova and Irina Mamai - have given life to this childhood dream that all of us probably share. 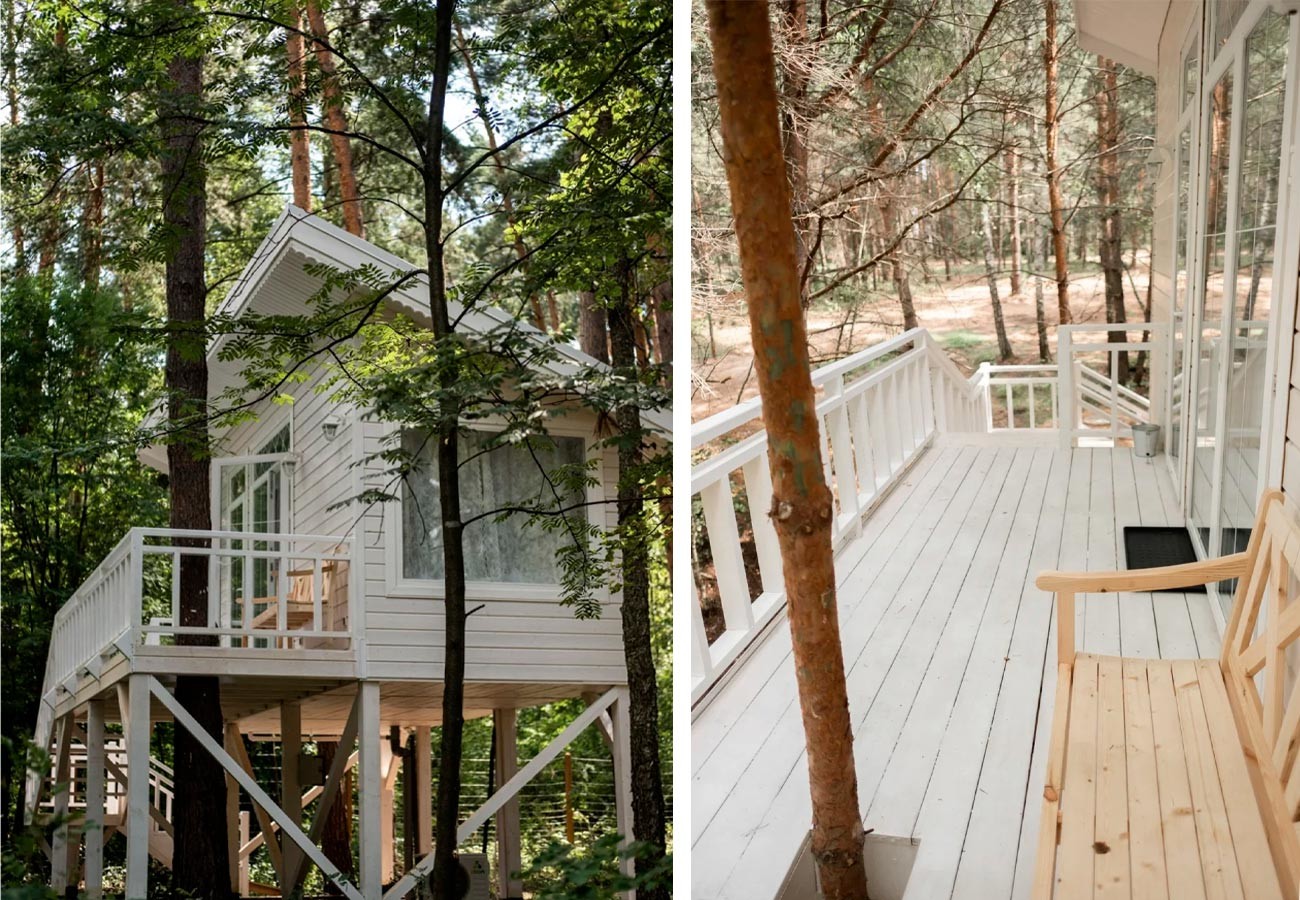 Situated on the territory of Zelenaya Tropa glamping in Tula Region, this house is built on stilts and doesn't cause any damage to the tree. Moreover, it can easily be moved to another place. The inside is incredibly cozy, and is entirely made from wood. 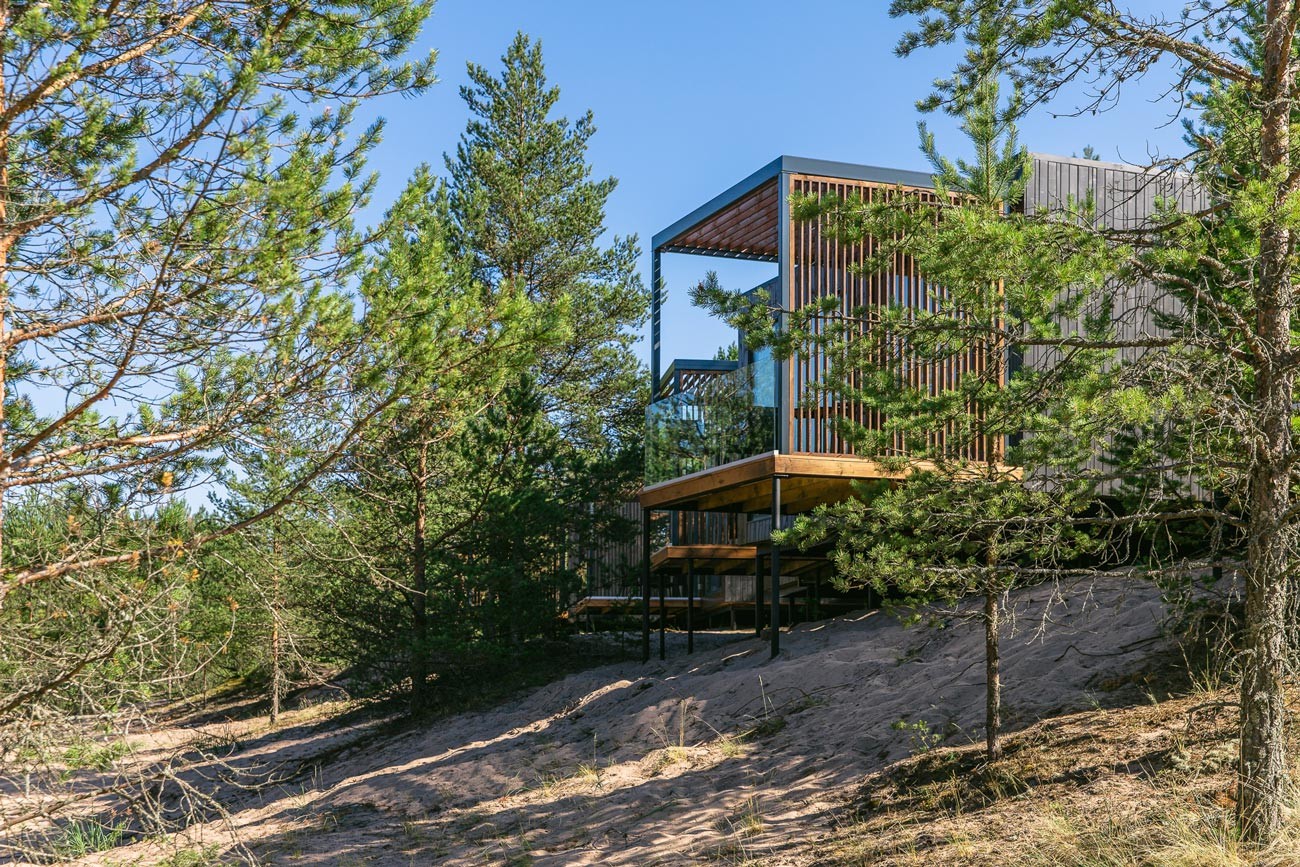 The hotel’s name translates as 'A point on the map' and is situated on the shore of Ladoga Lake in the town of Priozersk, Leningrad Region. Rhizome Architectural Bureau designed the house as a reflection of the surrounding natural habitat. 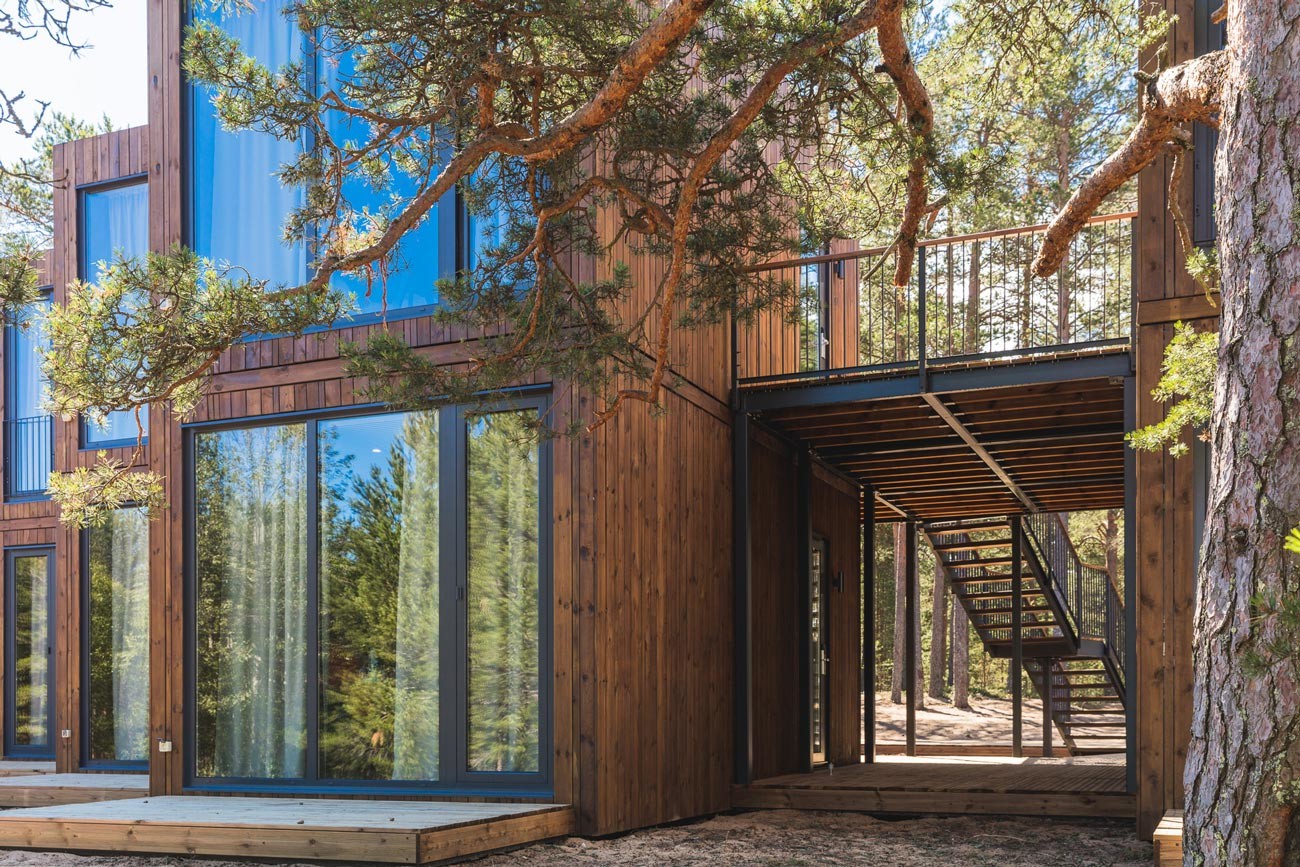 The hotel was built using environmentally-friendly technologies, and the ready modules were carefully installed without any heavy equipment that might disturb the pine forest. 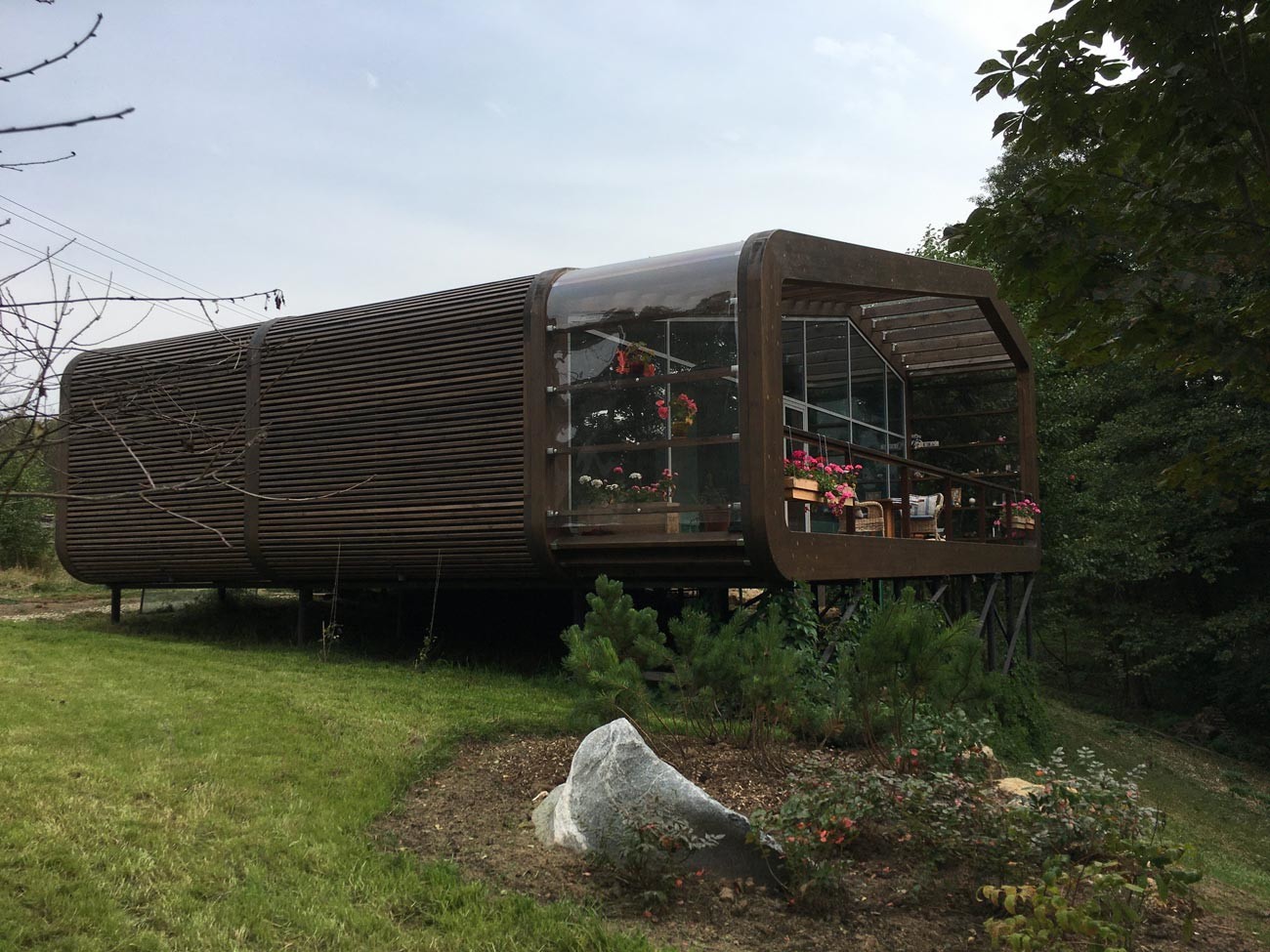 The DomBro Architectural Bureau believes it's a crime to cover picturesque places with walls. So their goal is to design and build a house that’s a symbiosis of Man and Nature. 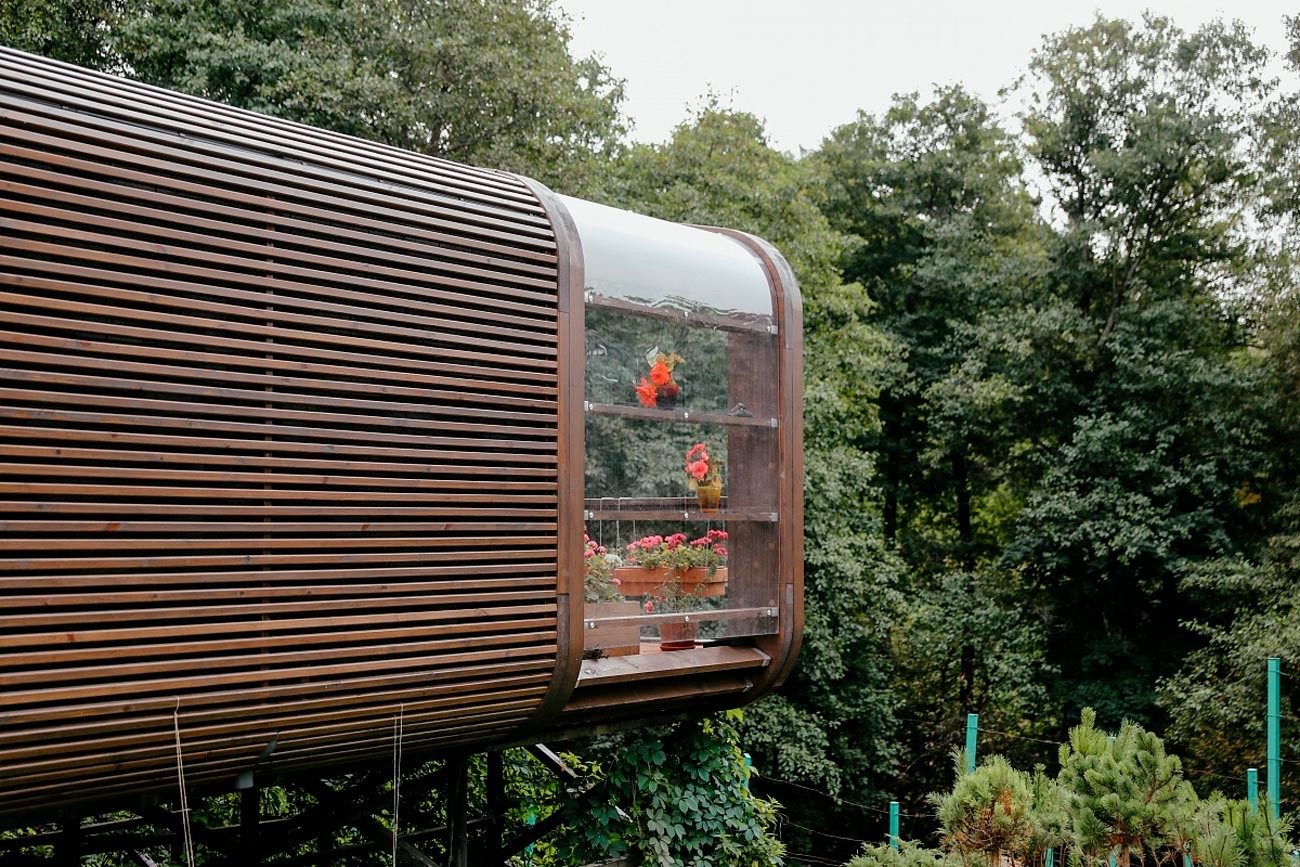 Their houses combine panoramic windows and a load-bearing structure made of wooden frames. 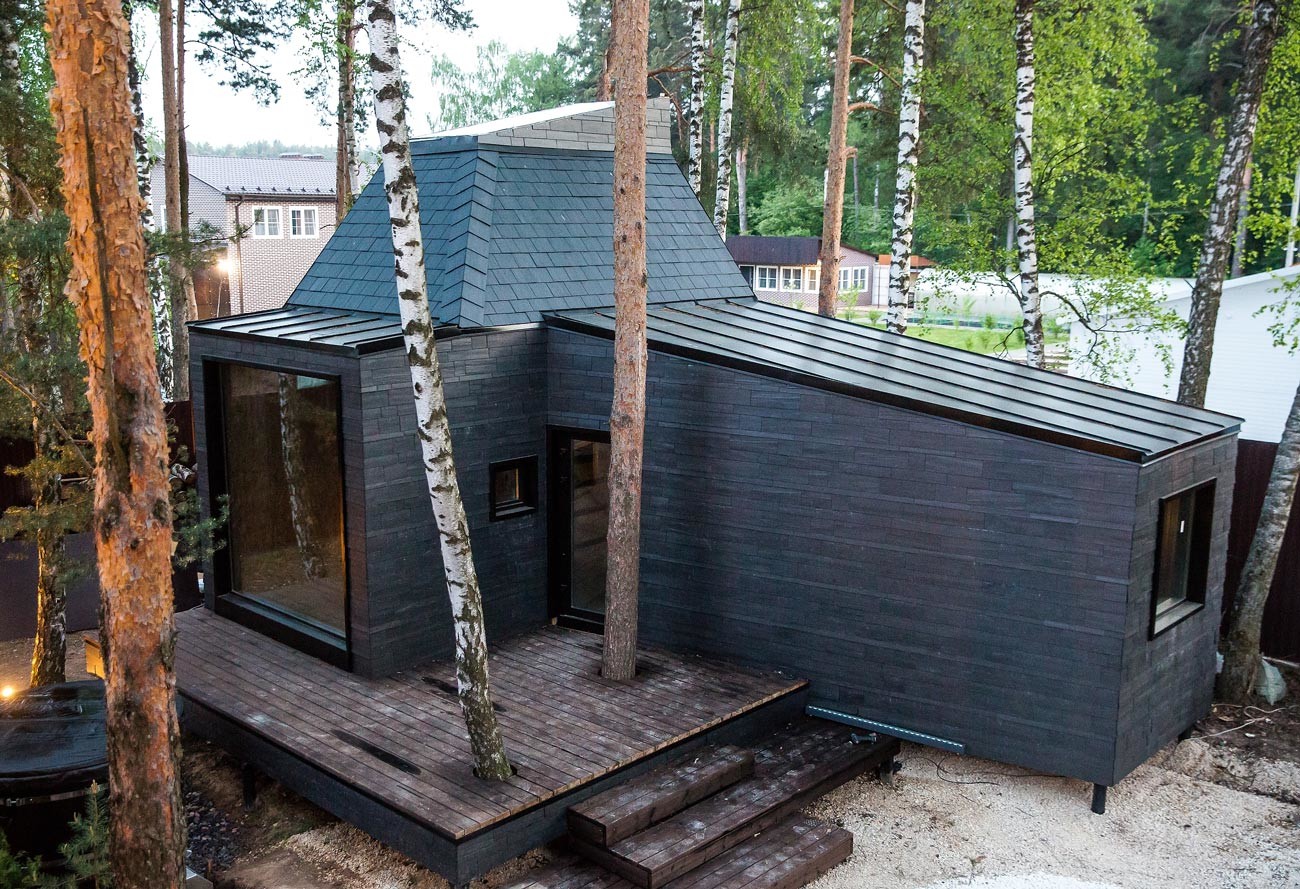 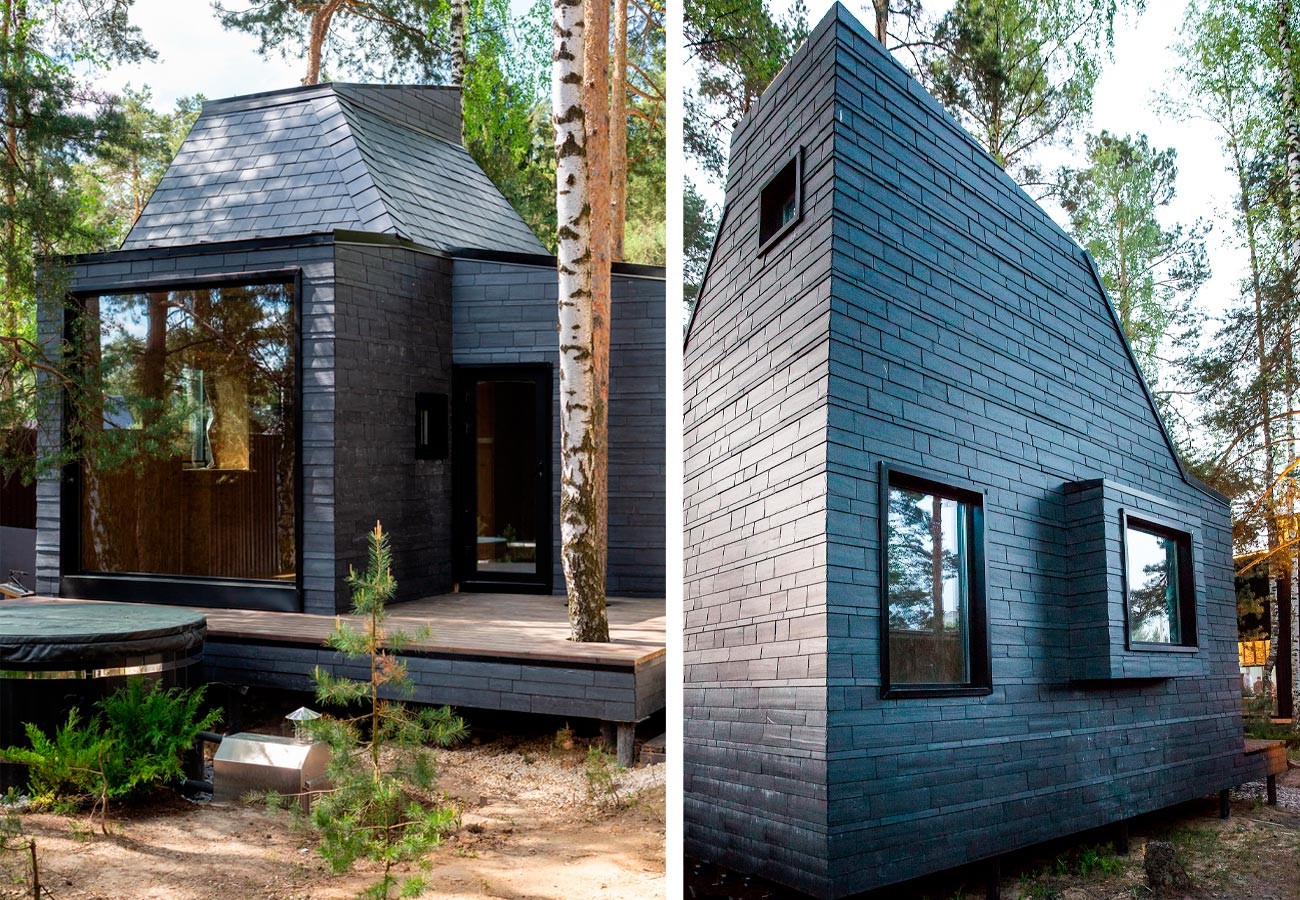 This is another project by architect Rustam Kerimov and builder Alexander Motkov. 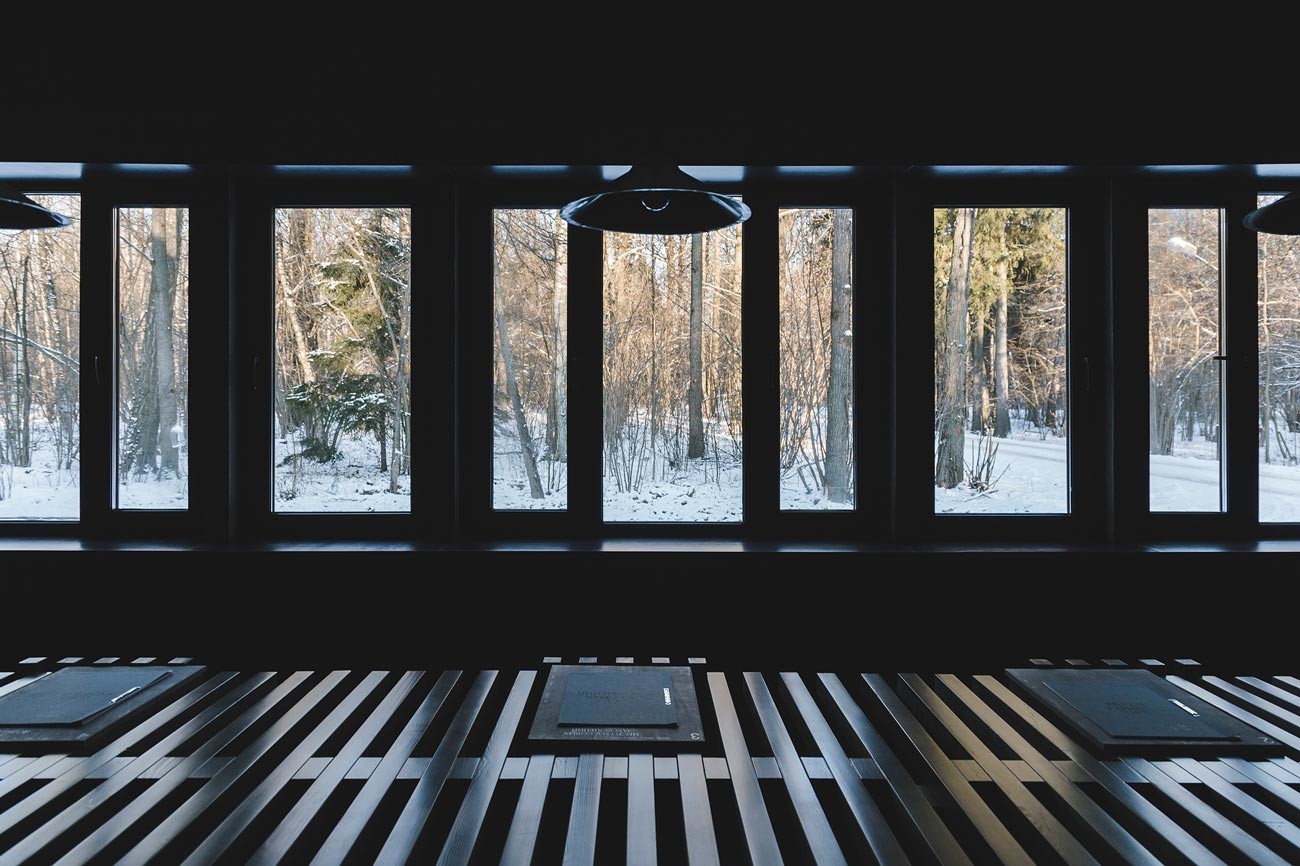 Igor Aparin from NOYD Сollab Buro created an incredible small info center in Moscow for the GULAG History Museum. This wooden venue is situated on the territory of a huge killing field that was used here in the 1930s by the Soviet police. This modernly designed information center stands on the site of Stalin's purge and Soviet political repressions. 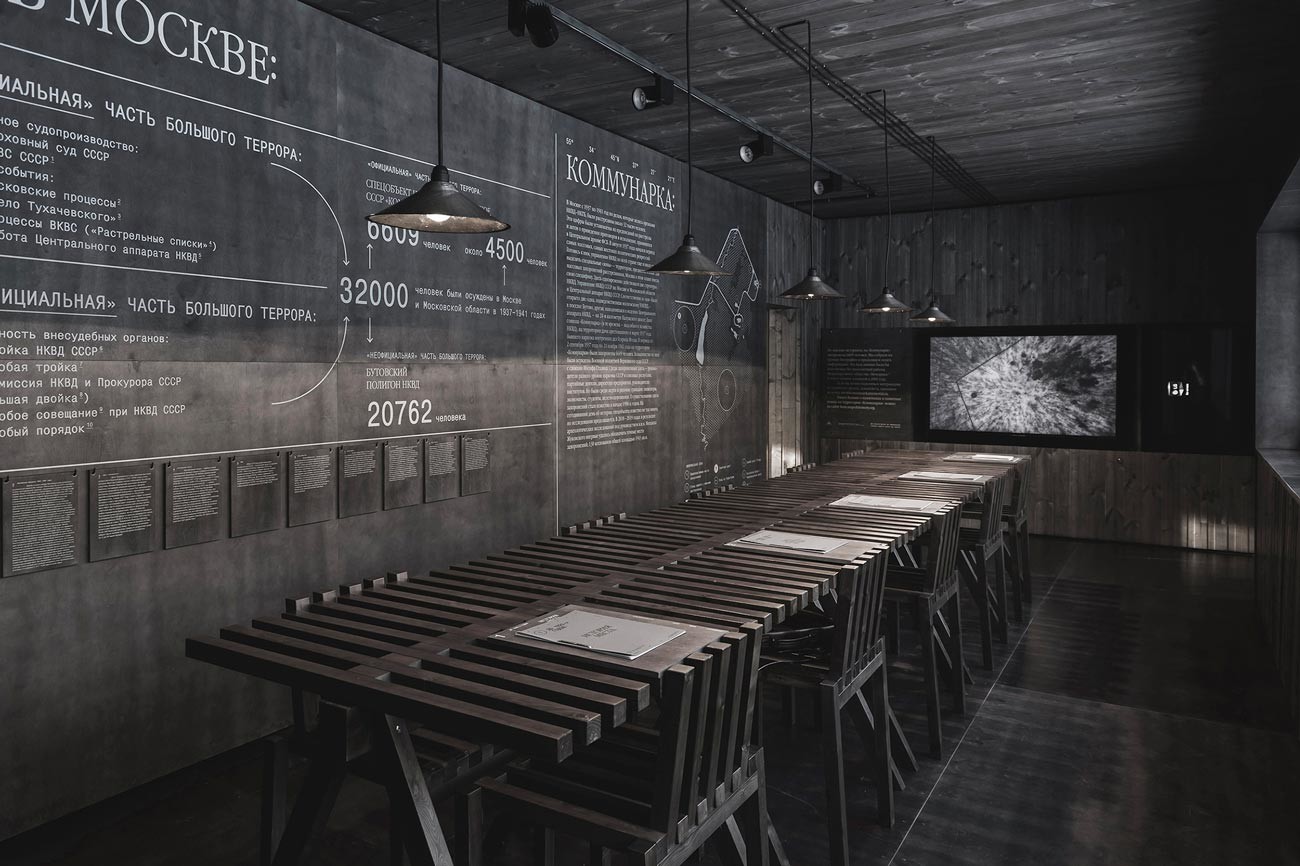 The exterior features are painted with a gray stain, creating a dramatic effect. At the same time the large windows let in lots of light, as well as offer a view to the site where the terrible executions happened.

All these houses are either winners or finalists of the ARCHIWOOD architectural prize.