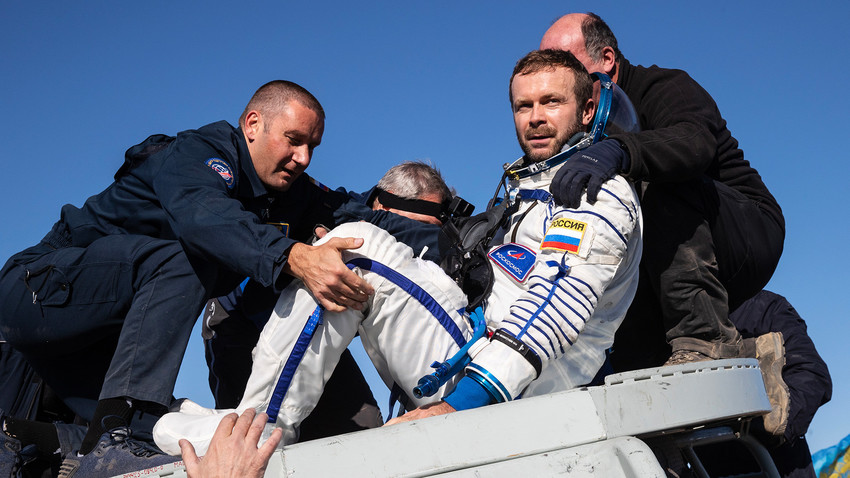 Sergey Savostyanov/Sputnik
The hardest moments, zero gravity, limitation of time and a take off like an amazing roller coaster ride - director Klim Shipenko tells about his experience filming in orbit.

Klim Shipenko spent 12 days on board the International Space Station (ISS) filming the upcoming ‘Vyzov’ aka ‘The Challenge’ - the first feature length movie to be filmed partially in space. Together with Yulia Peresild, they became the first actress and director in the world to go to Earth’s orbit. The crew then successfully returned to Earth on October 17, 2021. 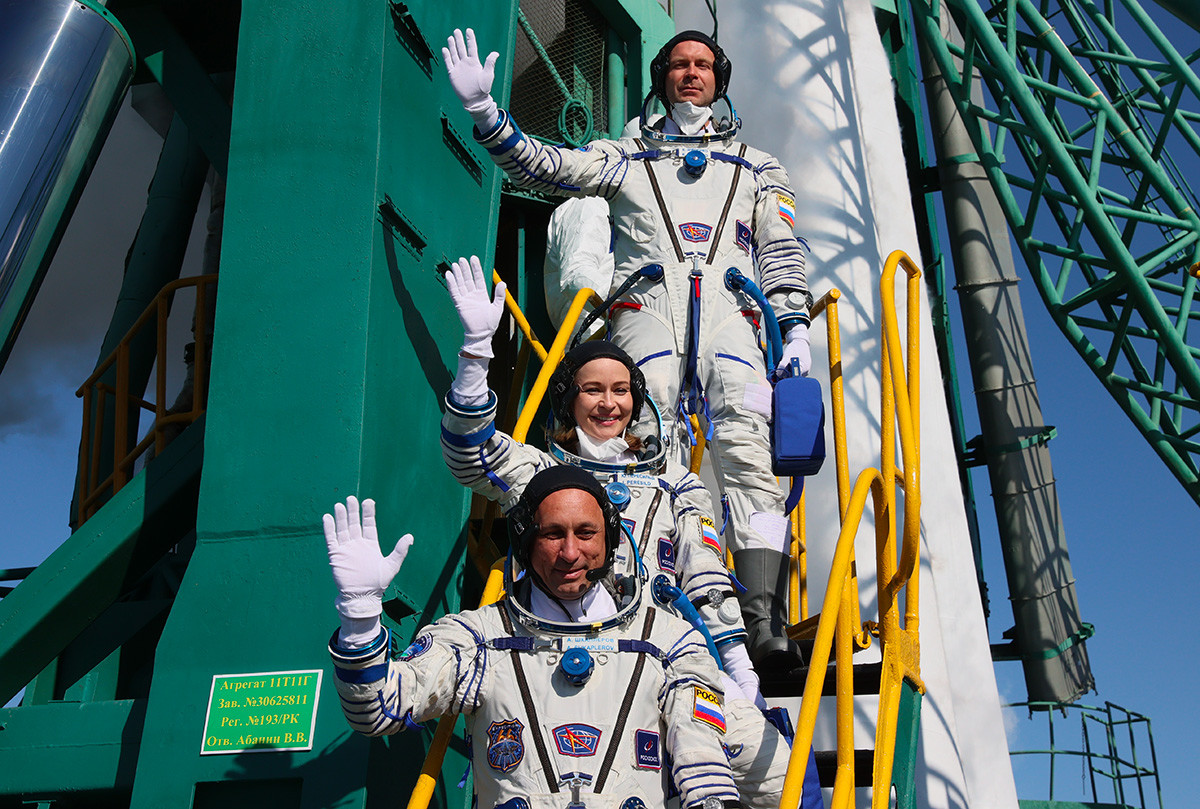 Previously, Shipenko directed a space drama about the 1985 Soviet mission to rescue the Salyut-7 station, after it became unresponsive. But the new experience taught him new ways of creating cinema, which he shared in an interview with RT. We choose the most notable moments.

The hardest things in space

“There are certain aspects of life up there that I had to get used to and I’d never quite done: washing yourself, eating and going to the toilet. It’s very uncomfortable there. A person can get used to pretty much anything, but those aspects are the hardest to get used to. Other than that, it’s the state of flight and, you know, you have a perspective and the view of Earth. Nothing down here can beat that.”

About the moment that struck him 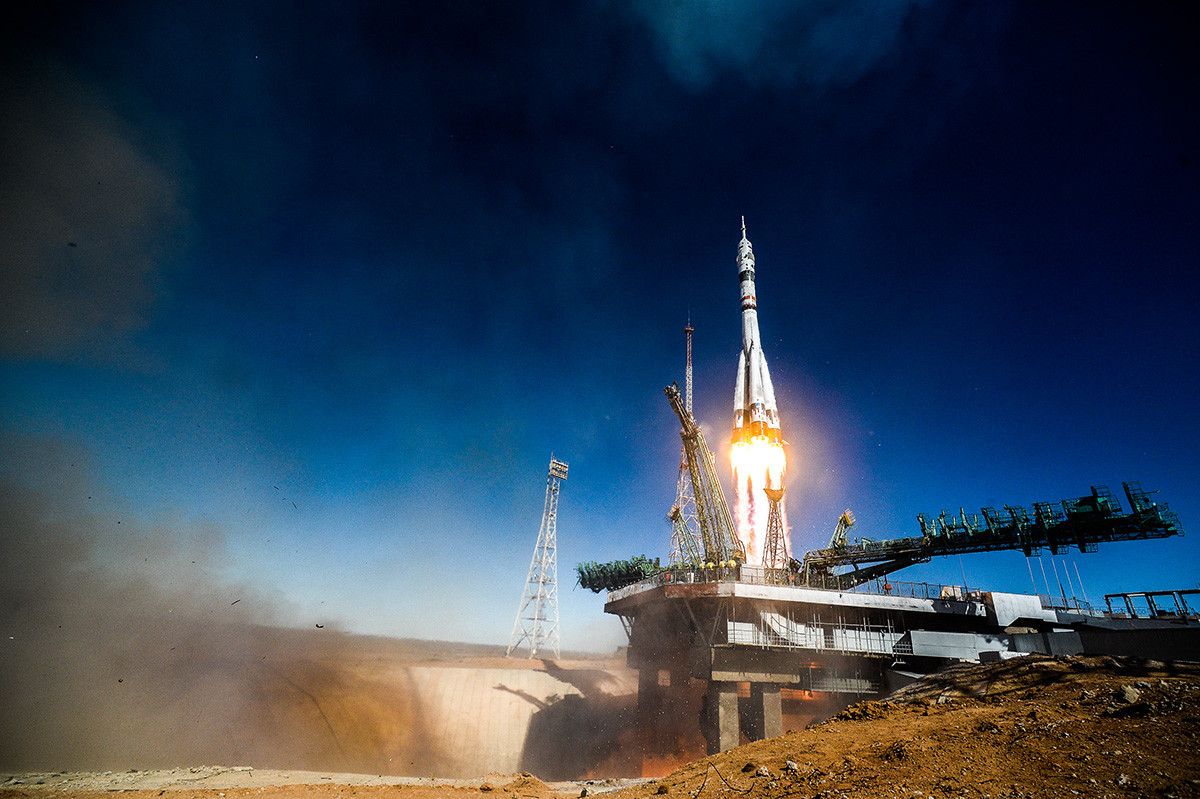 “It was the first day when we arrived. It was overwhelming, we were kinda shocked after the takeoff and the docking and very exhausted - a mix of those feelings. I remember Yulia and I flew around the station, we had a tour around the whole ISS, including the American section. At the end of this tour, we flew into the cupola and Yulia and I were just frozen up there. Then we stopped flying, we were just mesmerized by it. I guess that was the first moment when we realized ‘Oh my God, we are up in space, we are finally here.’”

How to film all by yourself

“We were shooting like a live-action film with artistic light. I was aiming for that, we were not just turning on the lights and ‘Let’s go!’ No, I was trying to create a cinematic atmosphere there and not to have my shadows over the actress. Basically, I was trying to make Yulia look pretty, to emphasize that because she is a beautiful woman. 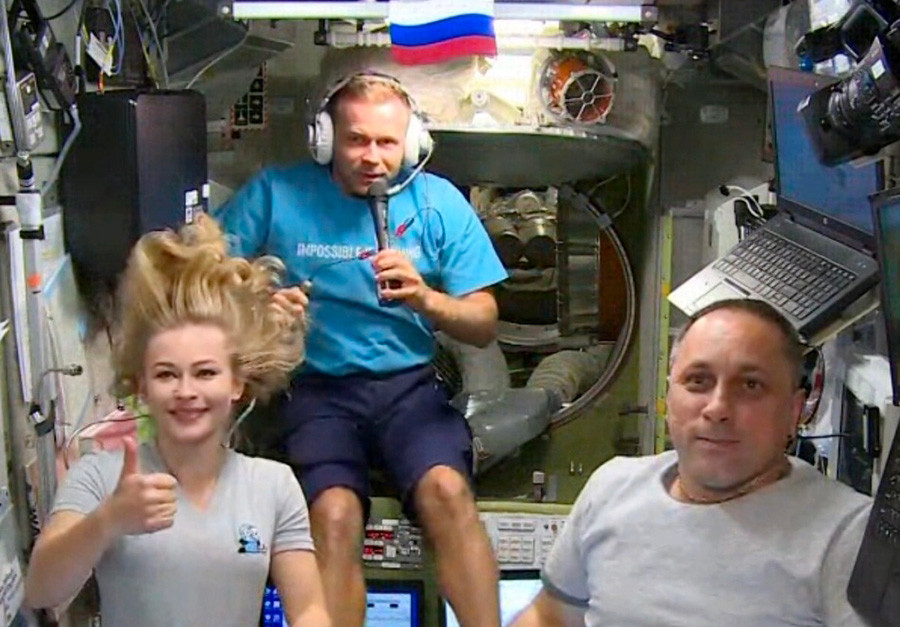 It was difficult, I was also doing sound engineering, camera mechanics, backing up material, sending it to Earth for my editor to check and the colorist to make sure I’m doing all the technical aspects of it right and it’s not too dark and not too bright. <...> I’m not saying that because I’m that big of a hero, I knew it was gonna be like this. I was preparing and training for that.”

“They’re used to being on camera!. Also, when they were not in a scene, when I was flying around with the camera, one of them would protect me from hitting my head on a lamp or something. That’s a problem there because, when I look into a viewfinder, I just see the viewfinder – I don’t see where I’m flying.”

About magic in space 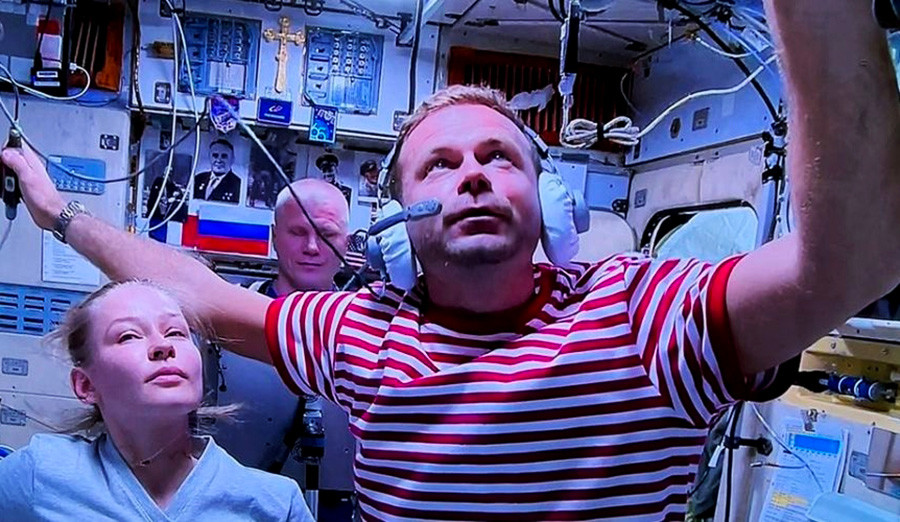 “Light ...we had to wait for that sometimes. Every 40 minutes it changes from darkness into light and back again. Those transitions are really magical. It’s not just like a sunset… it’s also something hard to come up with. Sun starts changing into something like rainbow lights. We had a scene when Yuliya is sitting in front of an illuminator, talking with Earth. Sun changed in so many ways that created a special space magical light. You can imitate it here, but I wouldn’t have been able to come up with it.”

About time in orbit

“I really had no time for many phone calls there. As you probably noticed I had a beard when I landed. I didn’t have one before. I really didn’t have time there to shave. It takes five times longer. I was like well, do I really need to shave, maybe I can start shooting earlier? The process takes longer than on Earth. So I have no time to miss.”

Advantages of filming in space

“I’ve spent a lot of time imitating the zero gravity in the space station so I know the limitations of what you can do even with a huge budget. Up there, what you were trying to imitate for months… it’s just a given. When you are directing a space film on Earth it’s really hard to twist your brain in four dimensions and to create and to invent the scene in the zero gravity weight.” 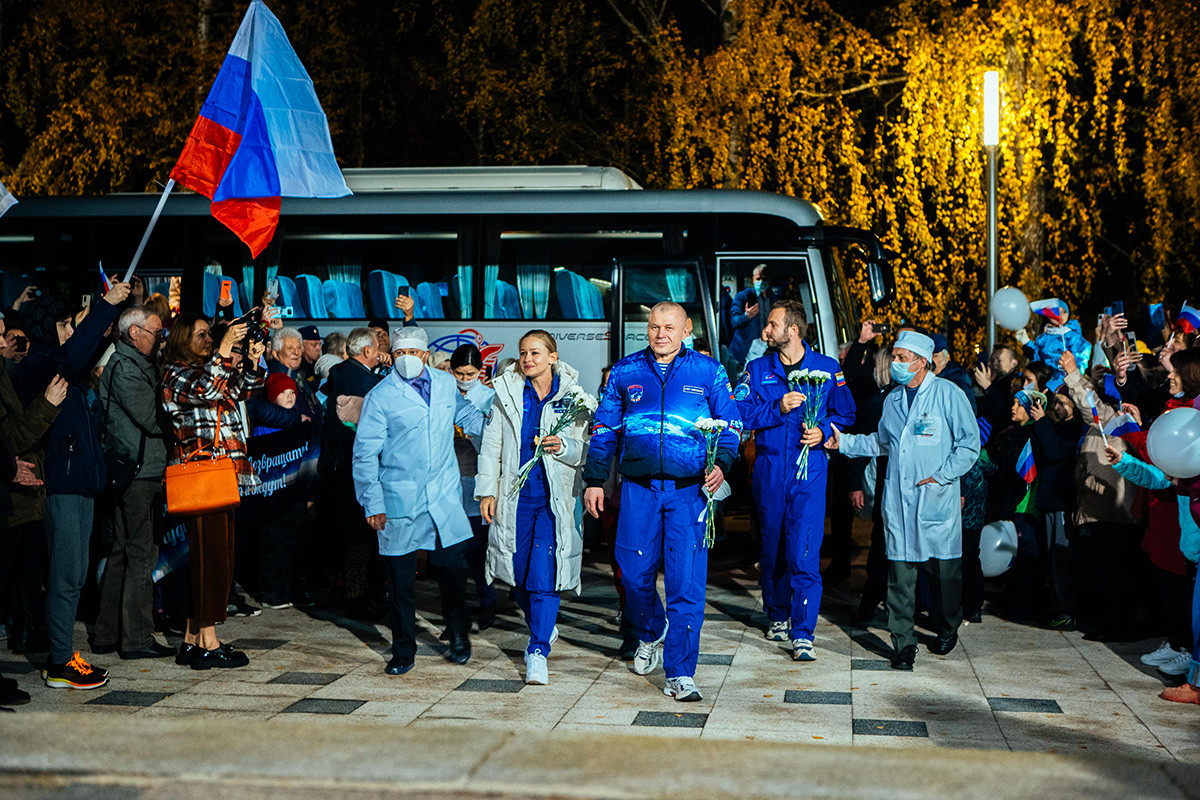 “Here, it’d be really uncommon if a person was standing on the wall or on the ceiling. But there, it’s very natural! Some scenes I shot in a way I realized I wouldn’t even be able to invent on Earth.” 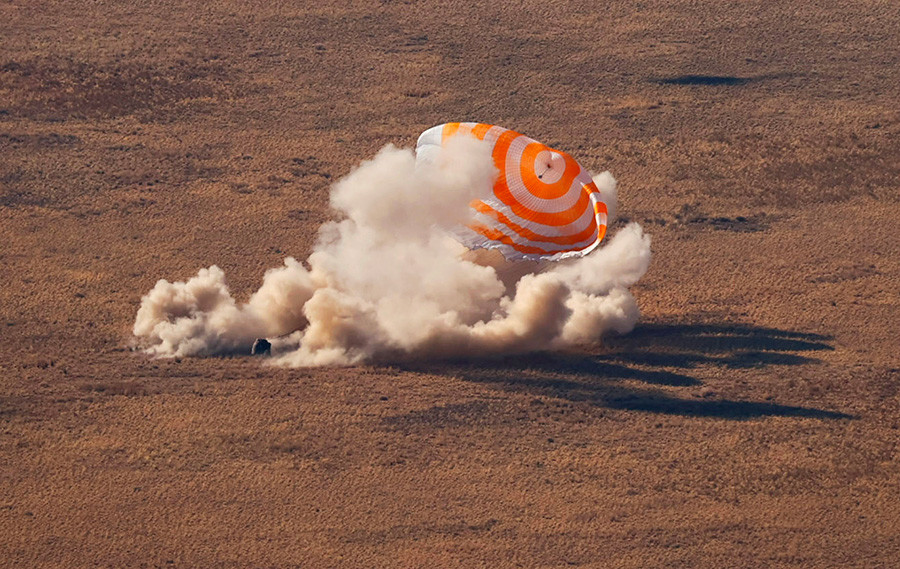 “It was more like an amazing roller coaster ride. We experienced only 2.5 G-force [during takeoff] I think, so it wasn’t bad at all. Landing was like 4-4.5 G-force, but we were trained for 8. When the parachute opened, I thought the capsule was going, like, 360 [degrees] before the landing. American astronaut Shane (Kimbrough) said he did it twice and it was like a wild ride. It was a wild ride, but I thought it would be like 10 times wilder!”

“I’m very competitive, I play sports and it’s always nice to be first. I don't feel like I have closed that subject. I think it’s just a beginning and people will look at what I’ve shot there and think, ‘Well, now we understand what we can do there.’ I guess filmmakers would be interested in shooting on the ISS and I will share my experience. It would be much easier for the second filmmaker, because I didn’t know what to expect in many ways.”

You can see the full interview with Klim Shipenko here.