10 MAIN propaganda artists of the USSR 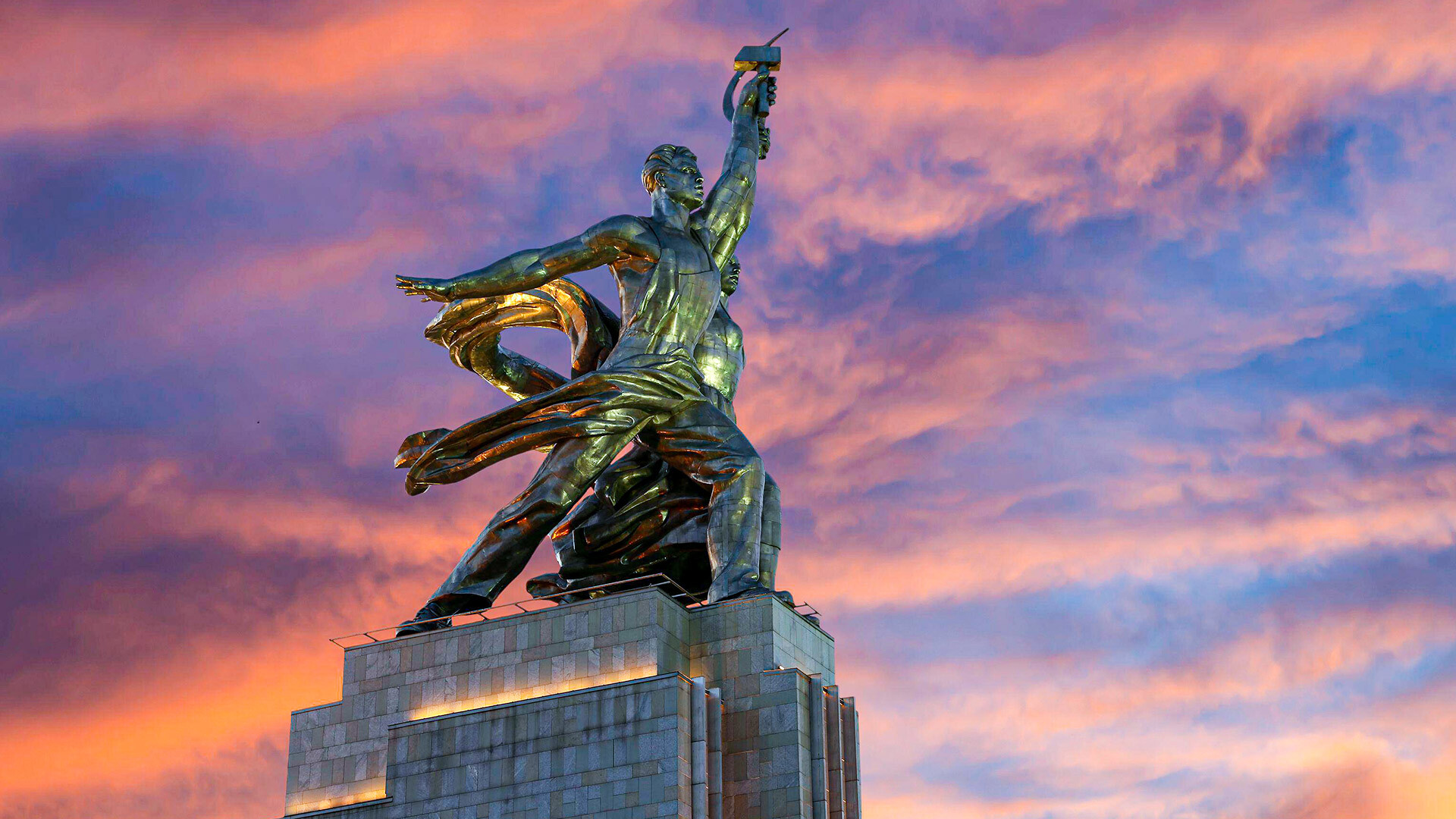 Legion Media
From the beginning of the existence of the USSR, propaganda was an important tool to spread communist ideology and the principles of collectivism. This was done through iconic posters, paintings, films and other works of art. Soviet propaganda was more than just a political instrument – this unique artform left behind a Soviet cultural legacy. 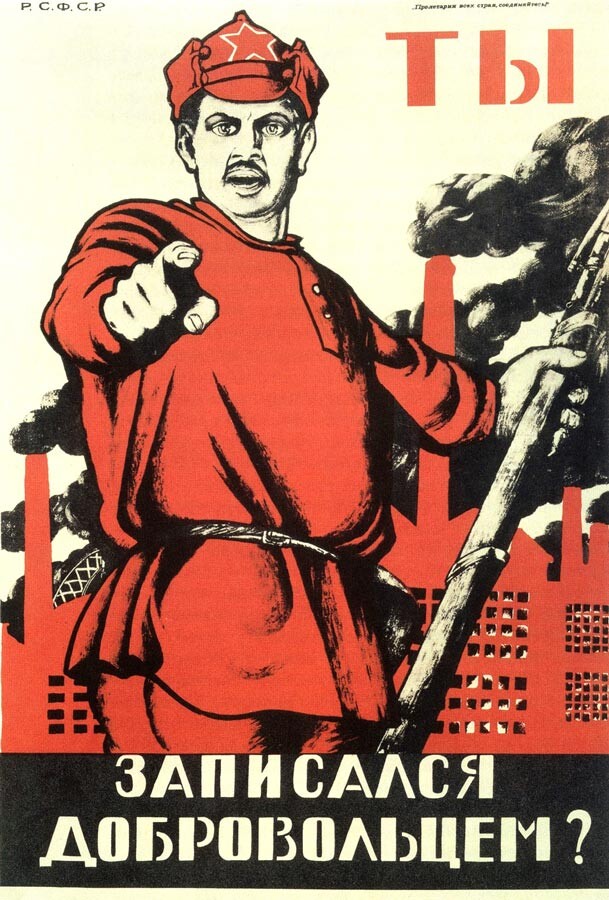 Dmitry Moor’s hand drawn cartoons had already been in print for ten years when he turned to creating propaganda posters right after the October Revolution. As an established master of satirical drawing, he passionately chose to serve the cause of proletarianism with his art. 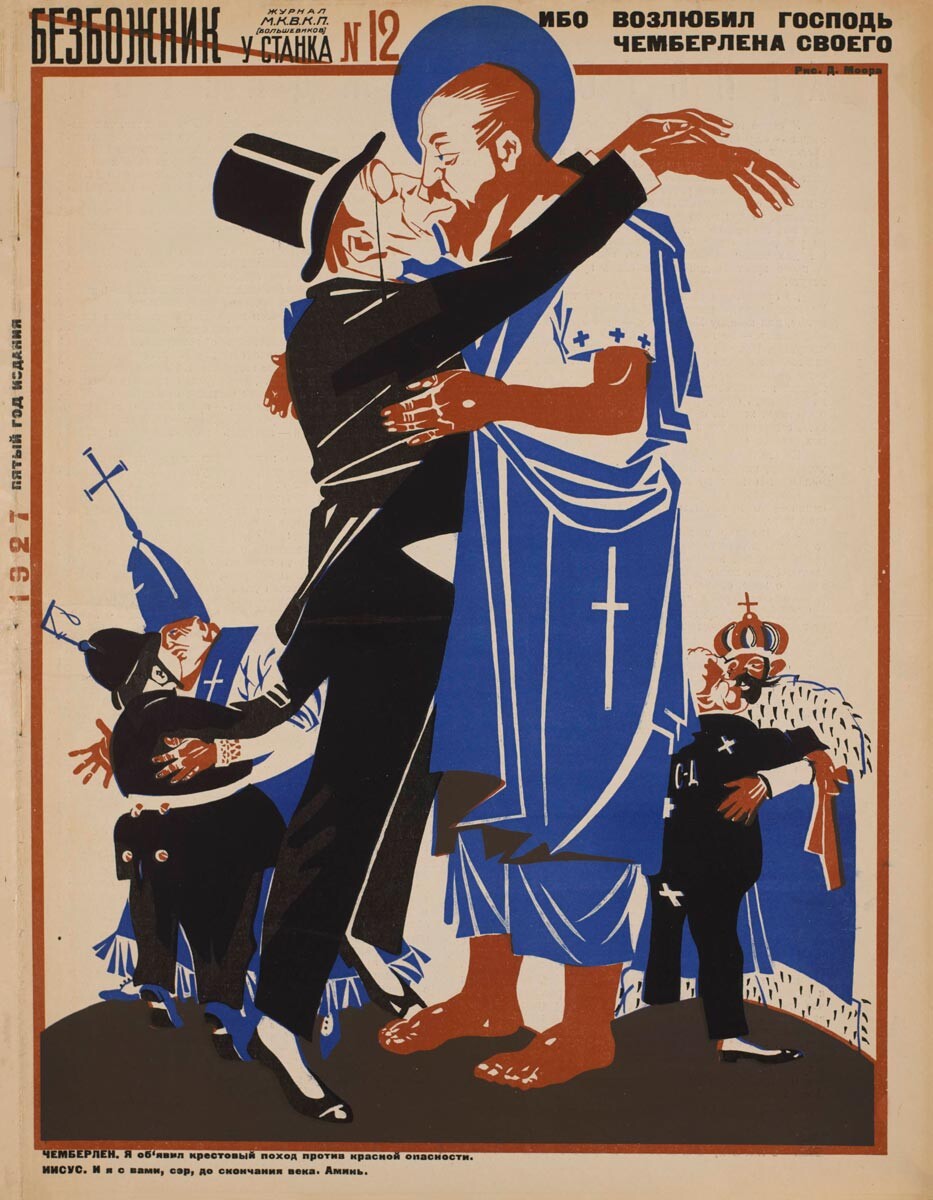 Moor was notorious for mocking the bourgeoisie, as well as Christianity. Religion was considered the enemy of communism at that time. Moor’s posters were put up at the entrances of churches and called for confiscation of property of the church in favor of the state and the poor. 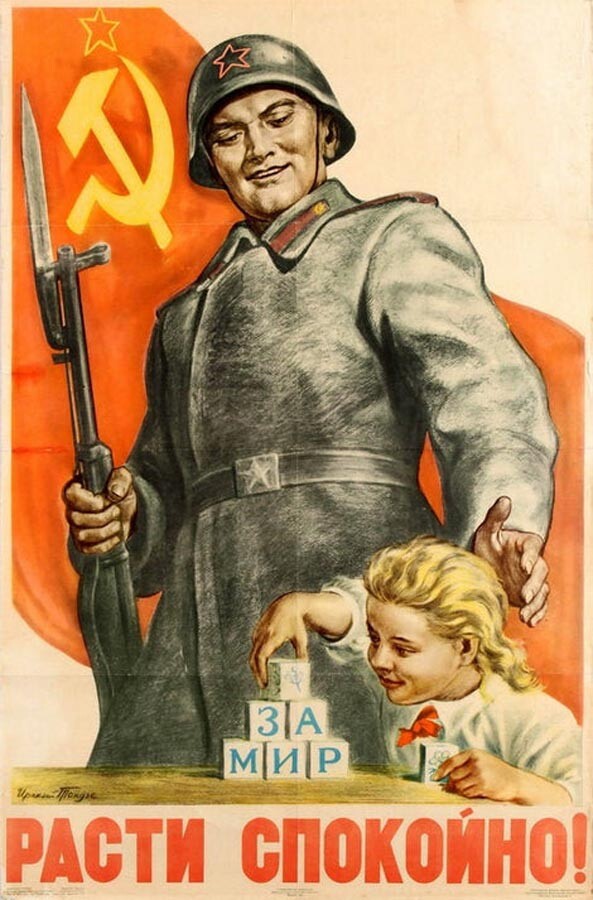 Iraklij Toidze was born in Tiflis (now Tbilisi), Georgia, where he received his artistic education from his father Moisey Toidze. At the age of 17, Iraklij had developed a painting style of socialist realism. His work played a significant role in the establishment of the Soviet theme in Georgian art. 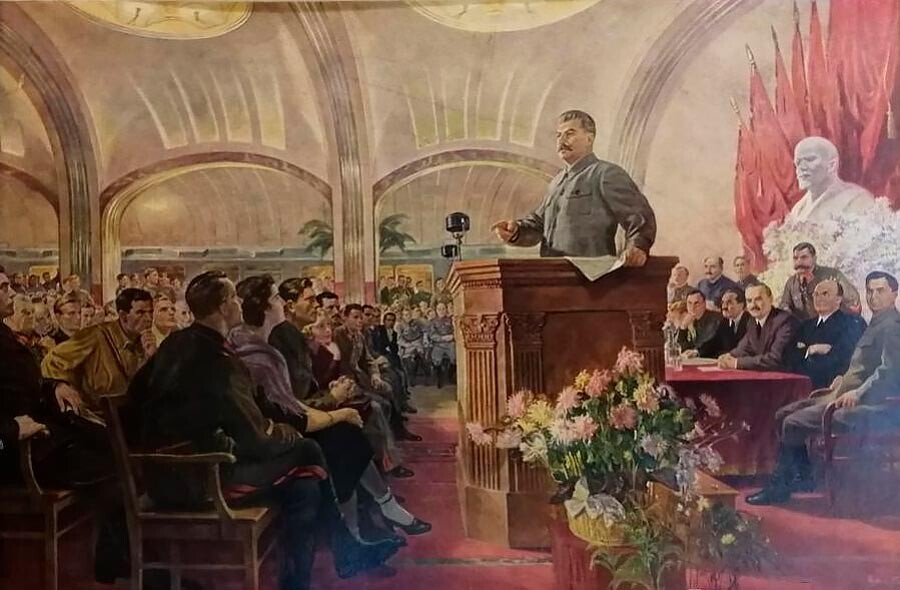 Iraklij Toidze. Stalin's speech at the ceremonial meeting devoted to the 24th anniversary of the 1917 Revolution. 1947

In 1937, Toidze moved to Moscow, where he began to work on idealistic posters. Next to his famous portraits of Stalin, Toidze’s Soviet art was often military themed. His style presented an image of the Motherland which was filled with patriotism, romance and heroism. 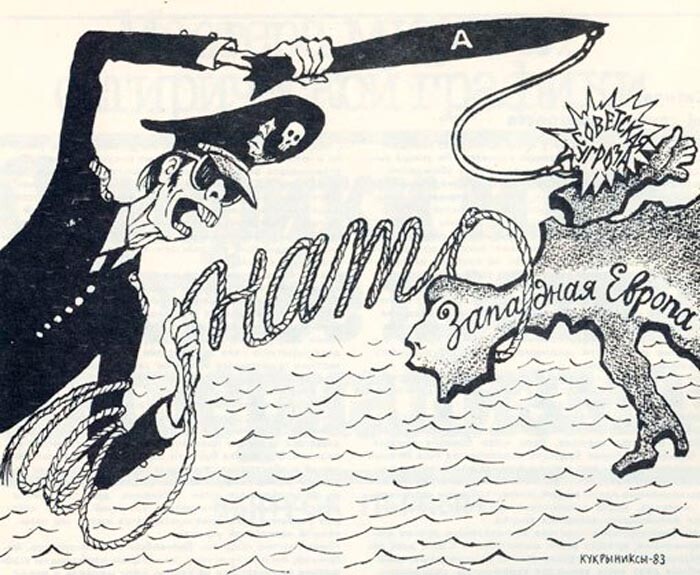 Kukryniksy was a trio consisting of the Soviet graphic artists and painters Mikhail Kupriyanov, Porfiri Krylov and Nikolai Sokolov. Their work was, among others, published in the socialist newpapers Pravda and Krokodil. The Kukryniksy collective was devoted to portray political events in the USSR and abroad in a satirical caricature style. 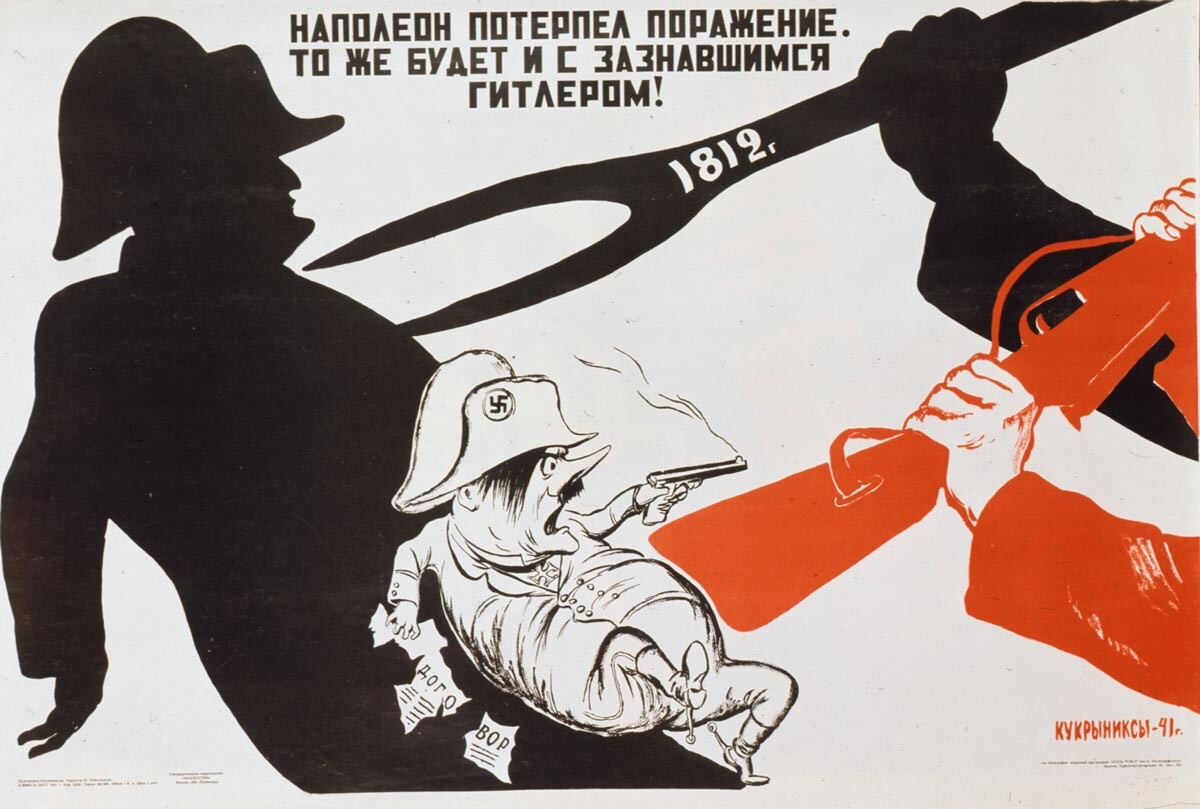 "Napoleon was defeated, that will be the case of the swelled-headed Hitler!" Reproduction of the poster from The State Historical Museum

The anti-fascist theme was an important part of their oeuvre – the poster ‘We will mercilessly defeat and destroy the enemy!’ became one of the first to appear in the USSR after the start of World War II. 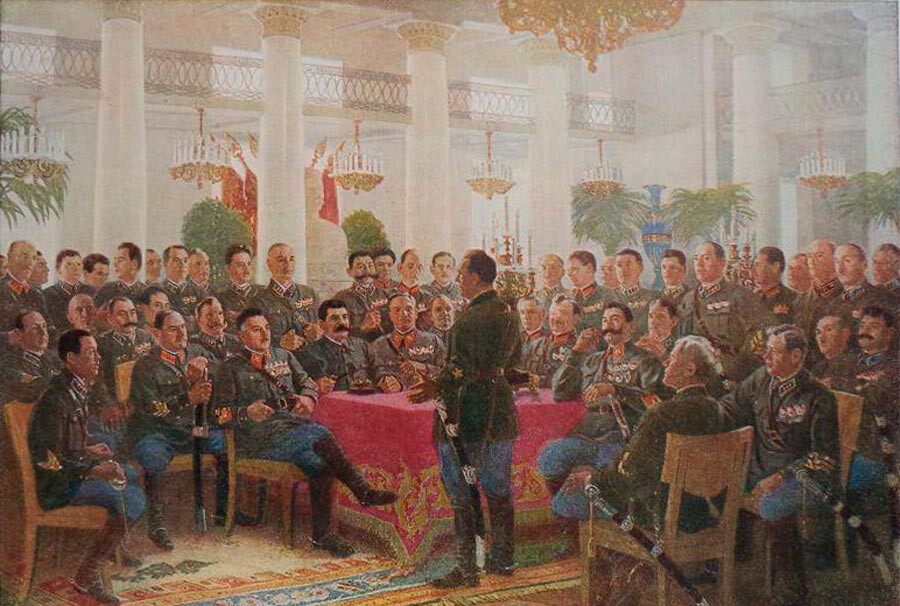 Alexander Gerasimov. Stalin among commanders of the 1st Cavalry Army, 1936

As a student of impressionist Konstantin Korovin, it was highly unexpected that Gerasimov would eventually turn to socialist realism. In 1925, he joined the Association of Artists of Revolutionary Russia and focused primarily on painting great leaders of the USSR. 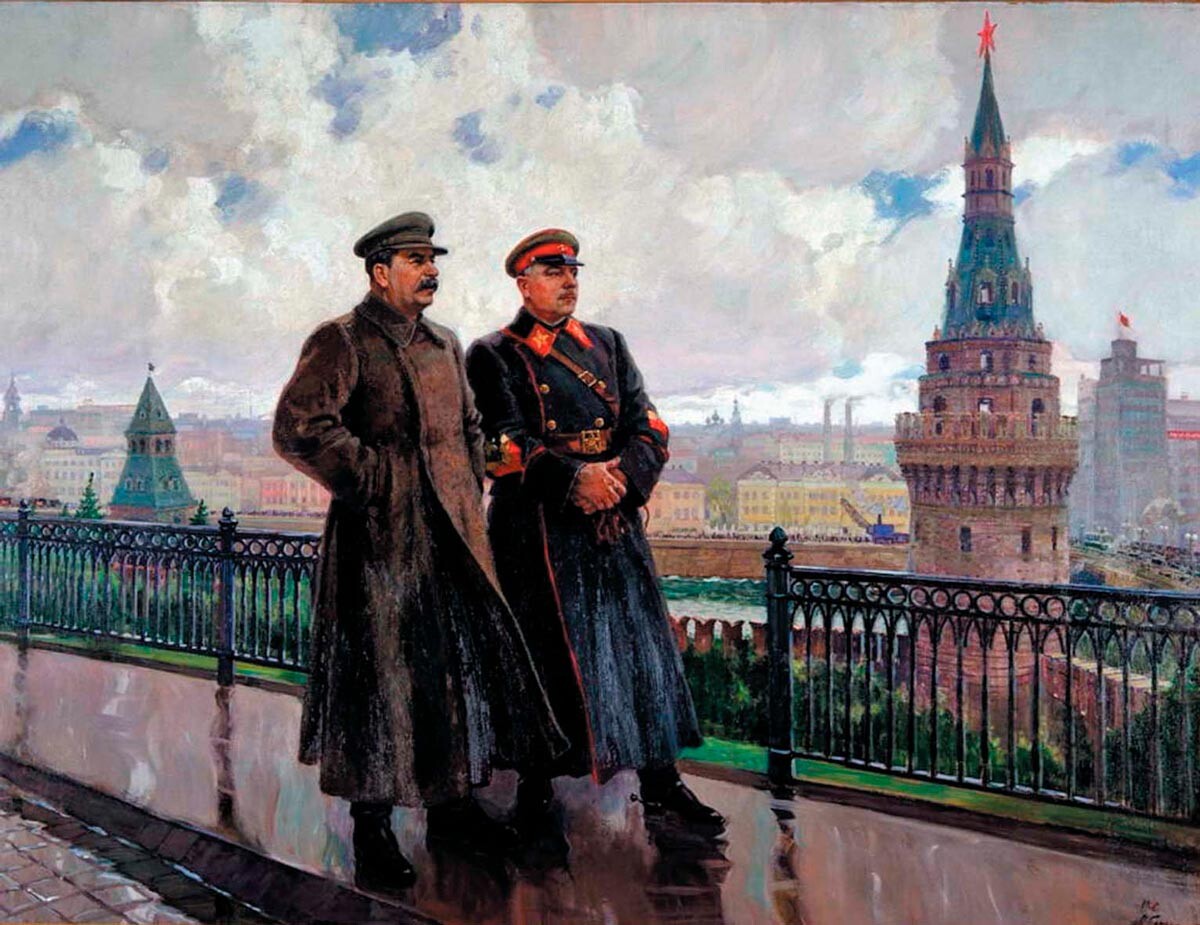 Alexander Gerasimov. Stalin and Voroshilov in the Kremlin, 1938

Gerasimov’s paintings of Stalin were especially highly appreciated. He received four Stalin-awards and is considered to be Stalin’s favorite artist. 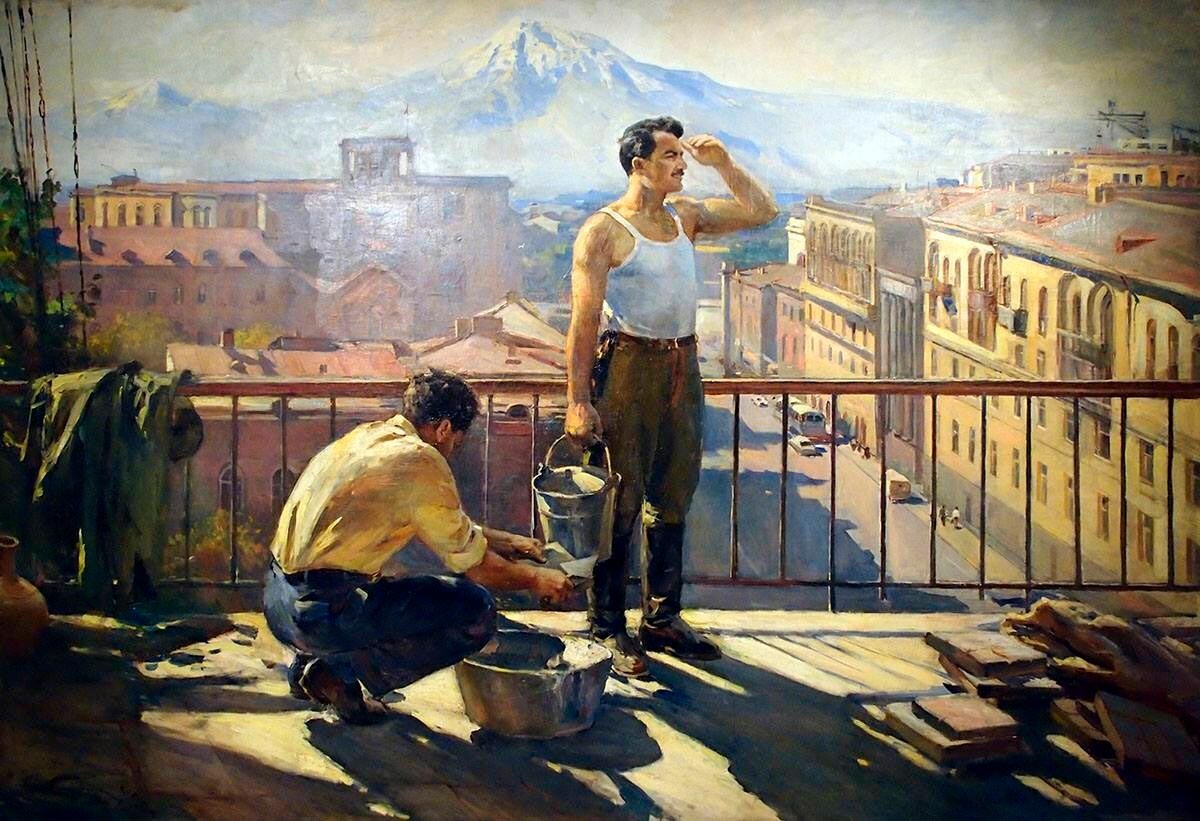 Dmitry Nalbandyan. Yerevan is being built. 1972

Nalbandyan was yet another highly decorated artist who, next to his propagandistic art, worked in the genres of landscape and still life. 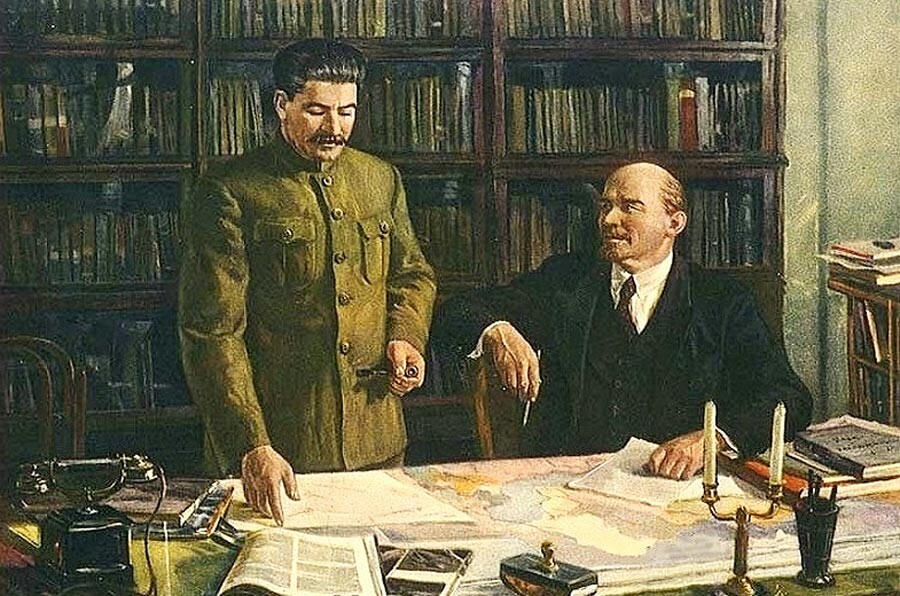 Dmitry Nalbandyan. Lenin and Stalin at the development of the GOELRO electrification plan, 1957

As a true portrait master, he painted Soviet leaders, such as Stalin, Khrushchev, Brezhnev, as well as elite representatives of the communist party, for which he received the unofficial title of ‘the first brush of the Politburo’ in the Soviet art scene. 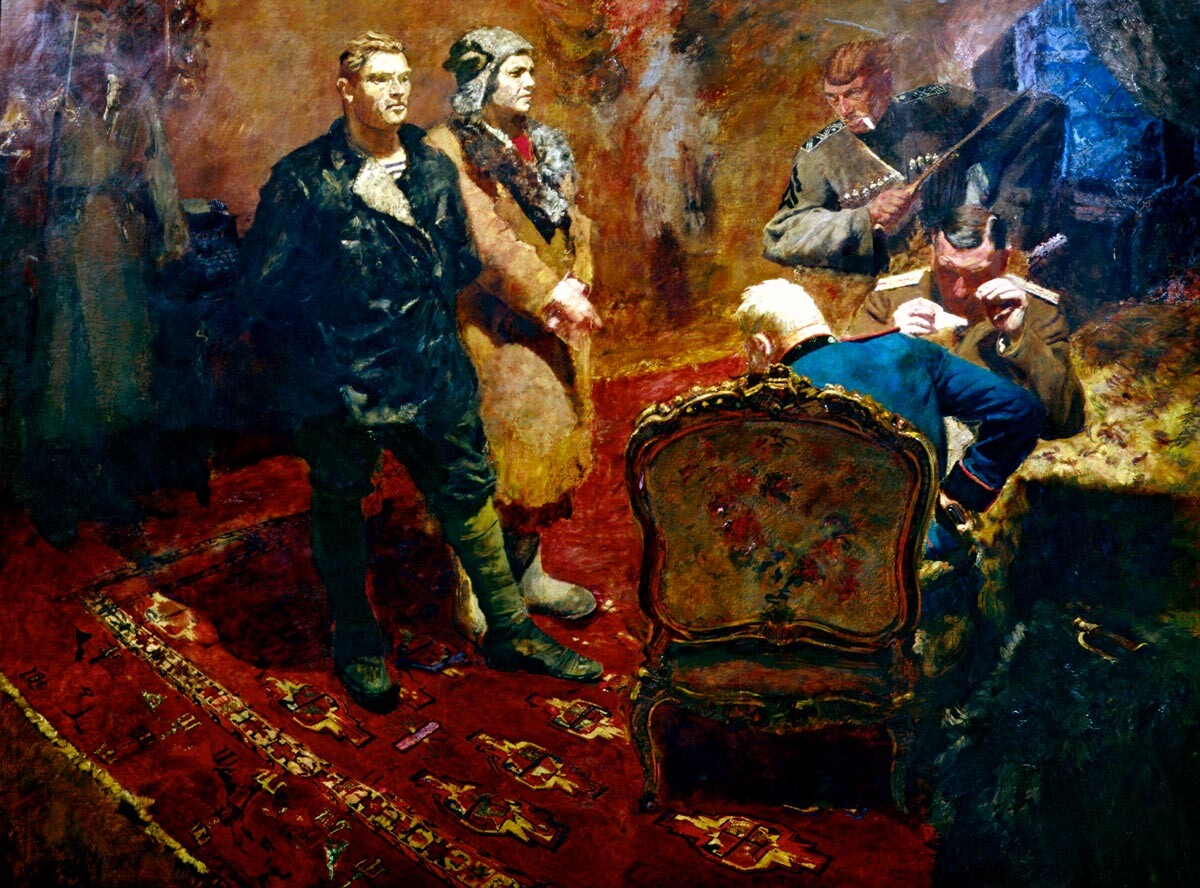 Boris Ioganson. Interrogation of the Communists, 1933

Ioganson adopted socialist realism as the main style of Soviet art and is considered to be its founder. His paintings are seen as exemplary in Soviet art. Ioganson was among those whose work determined the course of the development of the culture and socialist ideology of the Soviet Union. Like most of his colleagues, the artist was engaged in propaganda art and created several patriotic anti-Hitler posters. 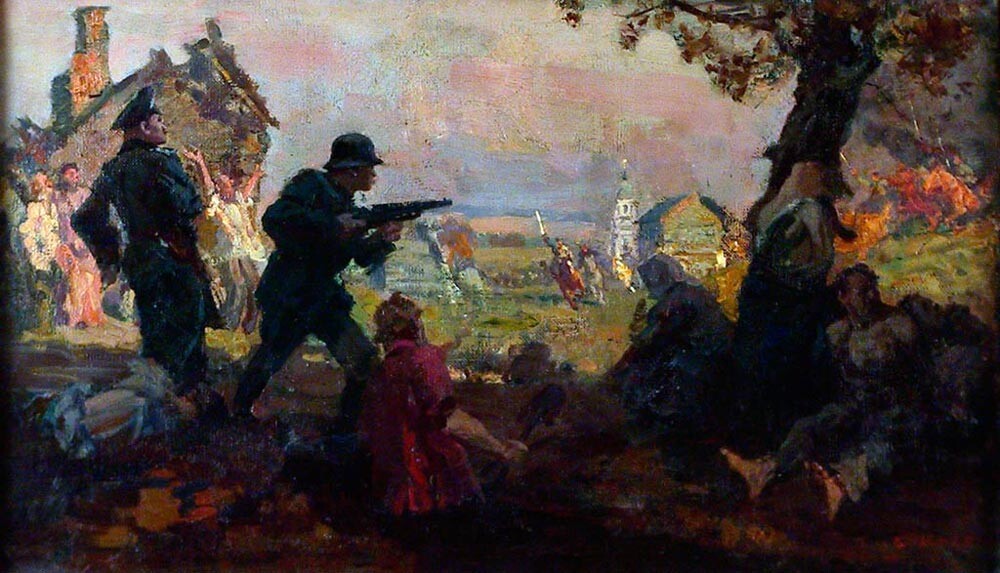 In 1941, he was awarded the Stalin Prize of the first degree for the painting ‘At the Old Ural Plant’, which portrayed the exacerbation of class opposition in Russian society. 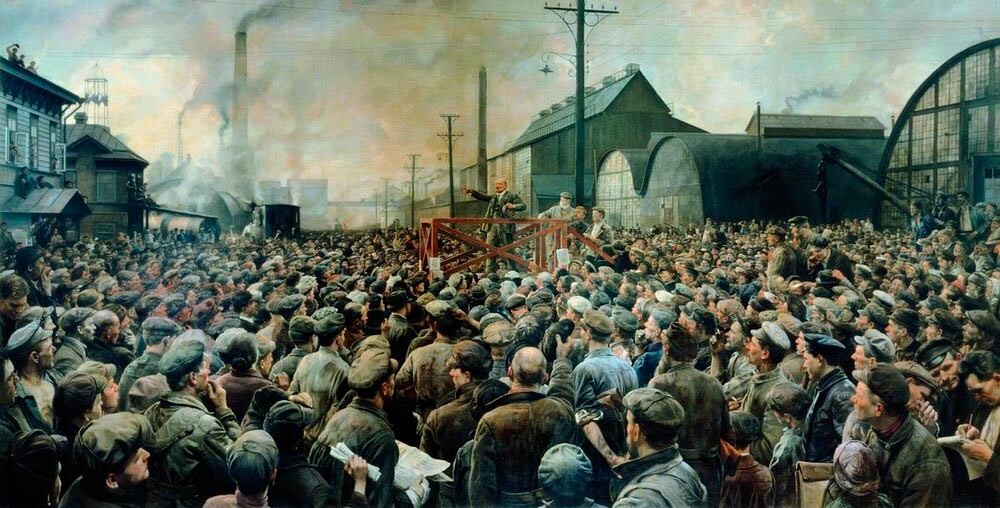 Brodsky devoted his work to revolutionary themes. In his paintings, he often depicted ideologists of the revolution. In 1920, Brodski attended a congress in Petrograd, where he made sketches of Lenin and then showed him a sketch and asked him to sign it. 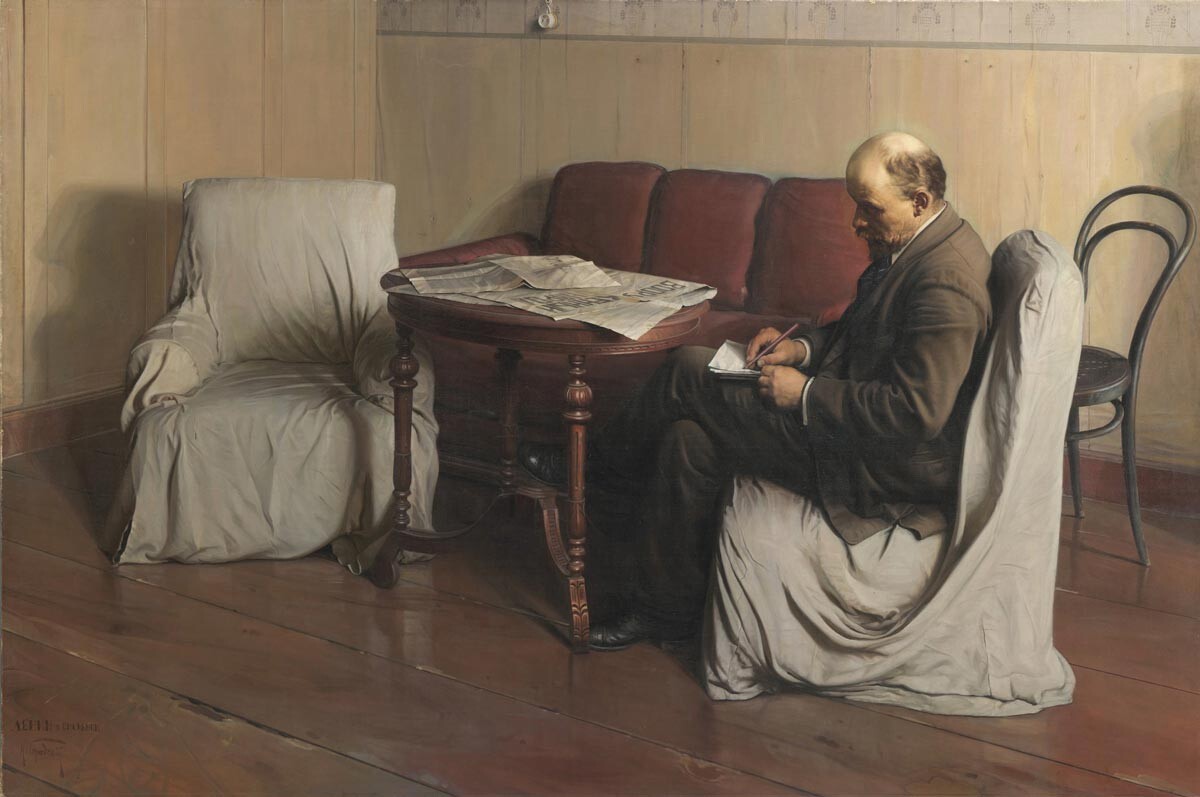 At first, the leader of the revolution decided that he did not look like himself in the drawings, but the people around convinced him of the opposite. “For the first time in my life, I subscribe to something I don’t agree with,” Lenin said and signed the autograph. Brodski played an important role in the Soviet school of art. As the head of the Russian Academy of Arts, he managed to train many highly appreciated Soviet artists. 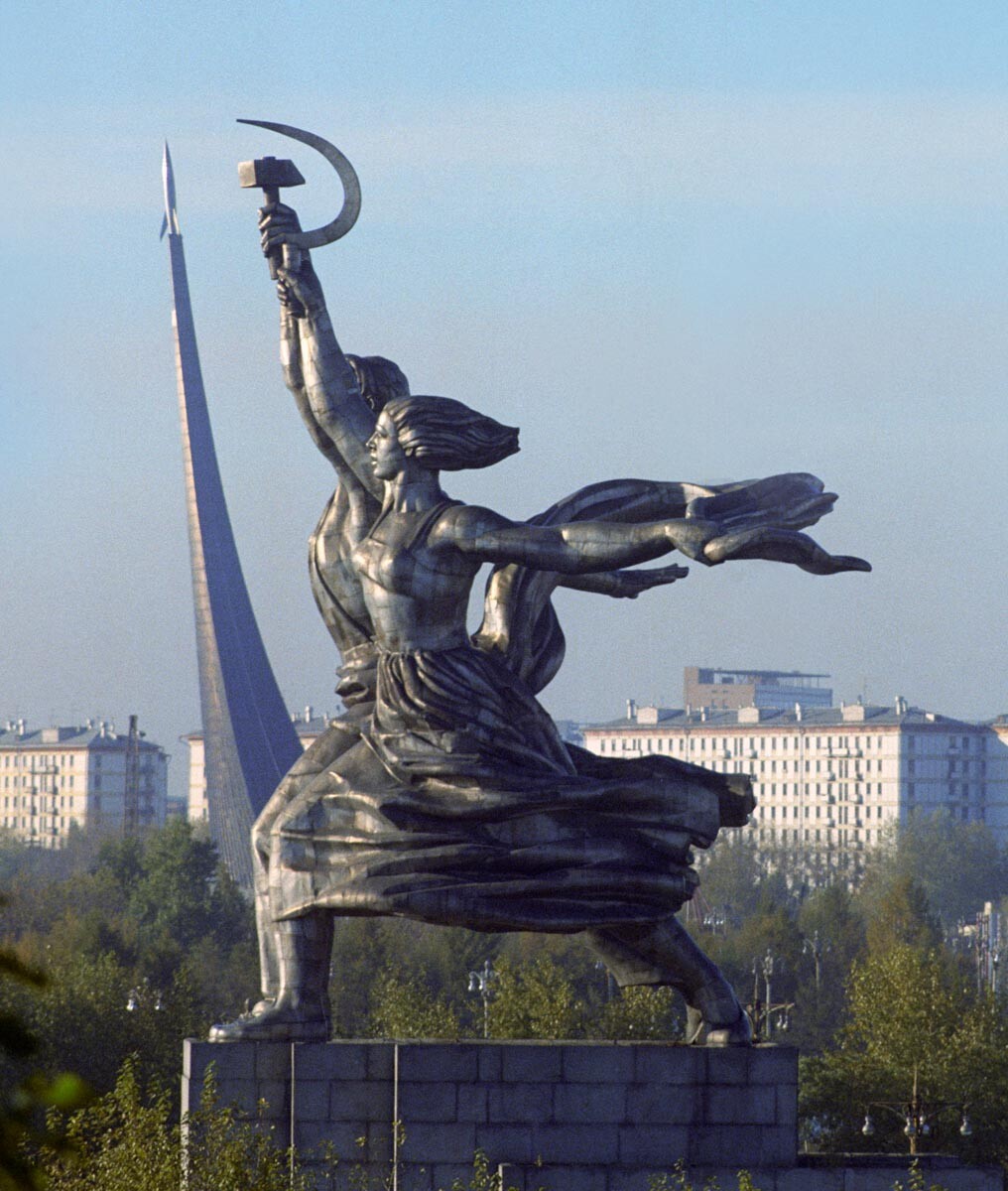 Mukhina was a student of French artist Antoine Bourdelle. She created sculptures within the framework of the so-called ‘Lenin Plan of Monumental Propaganda’ and became famous for her sculpture called ‘Worker and Kolkhoz Woman’ that was created to crown the Soviet pavilion of the World’s Fair in Paris. 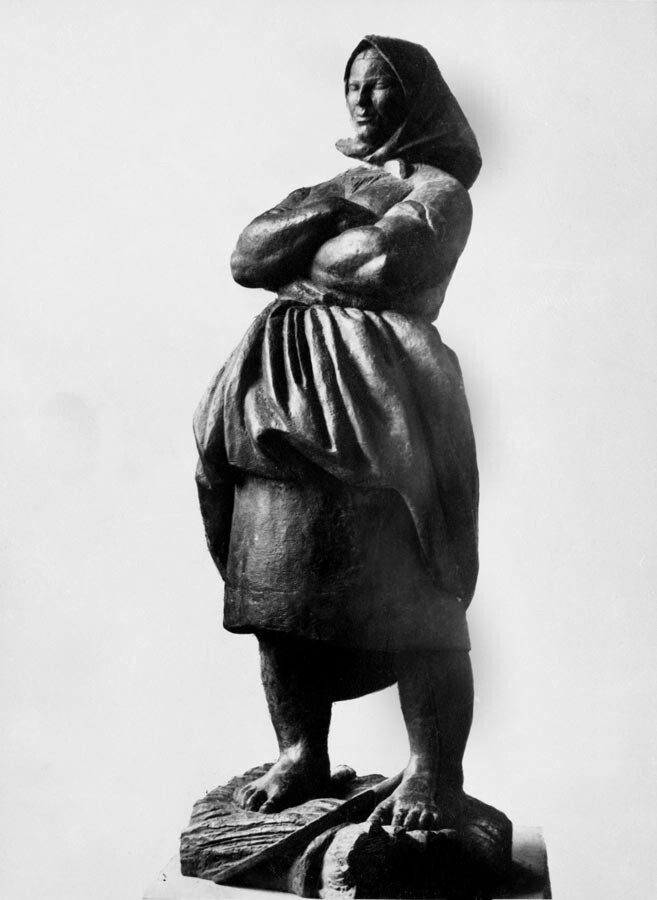 This world-famous sculpture, that was brought back to Russia after the Fair to be reassembled, became one of the main symbols of the USSR and even appeared at the beginning of every film produced by Mosfilm, the largest studio in the Soviet Union. During her life, Mukhina received five Stalin awards. 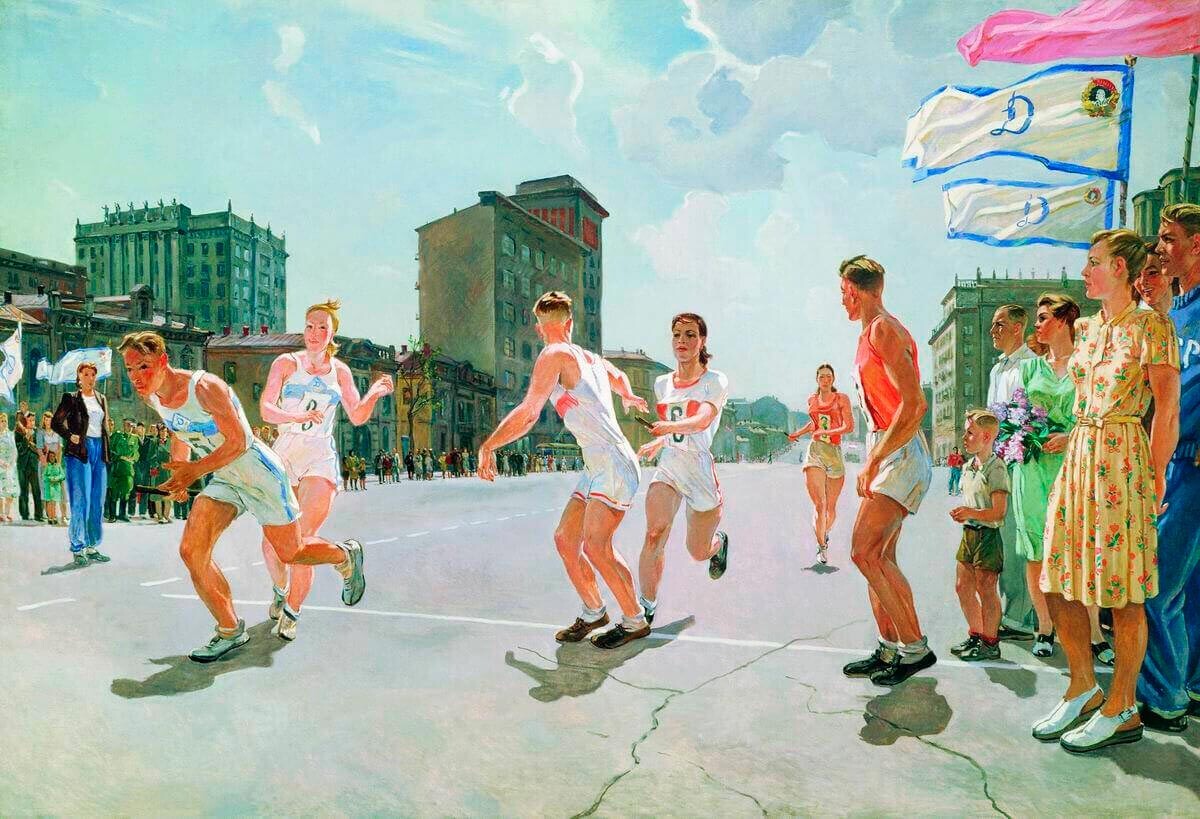 Aleksandr Deyneka. The Relay Race on the Ring B, 1947

The 1917 Revolution determined the fate of Dejneka. As the socialist ideology began to spread through the just founded USSR, he was to become an artistic champion of the revolution and new way of life. 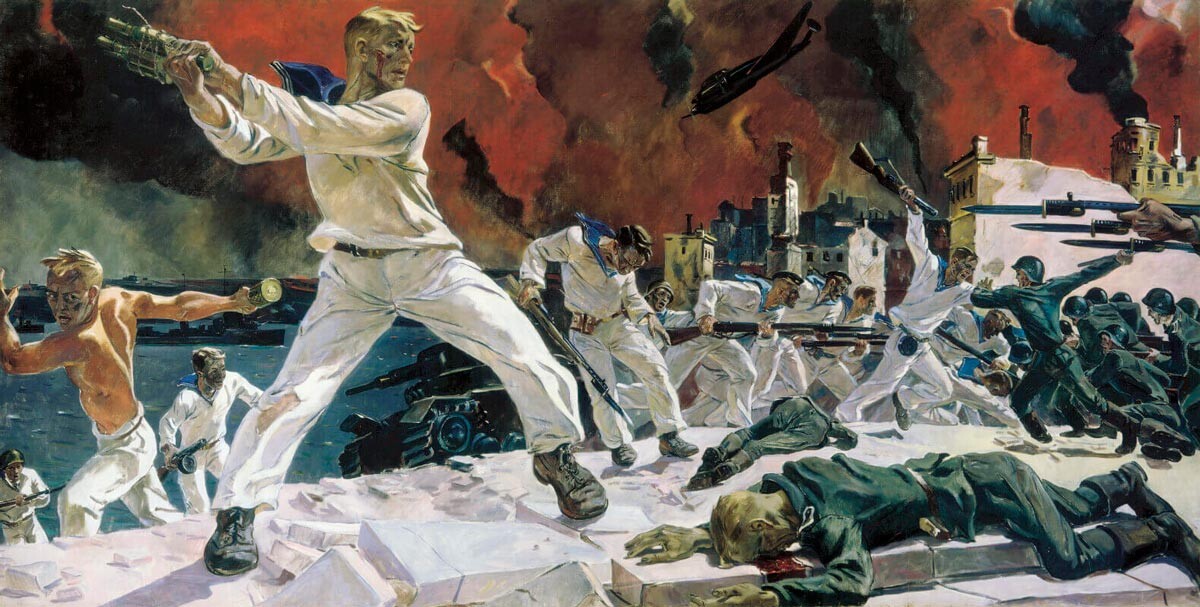 Aleksandr Deyneka. The Defense of Sevastopol, 1942

Dejneka worked as a photographer, designed propaganda trains, produced posters and took part in Soviet theater performances. He was heavily inspired by poet Mayakovsky. Both artists chose similar themes for their works that were inspired by the same thing – sincere faith in the revolution and Soviet power, as well as love for the proletariat. Dejneka created some of the most powerful images of fighters against fascism and thought of working on propaganda as his duty to society. 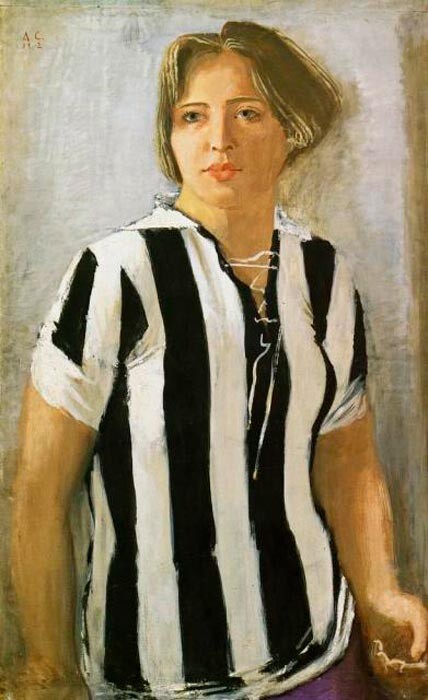 In the 1920s and 1930s, Samokhvalov focused his art on the main topic at that moment: the leaders of the next five-year plans - the stages of implementing industrialization of the country. In 1935, six months after the start of large-scale purges, Stalin formulated the motto: “Life has become better, life has become more fun.” Artist Samokhvalov, who, in those times, collaborated with Aleksandr Dejneka, skillfully expressed these words in his art and was recognized for it by the Soviet leader. 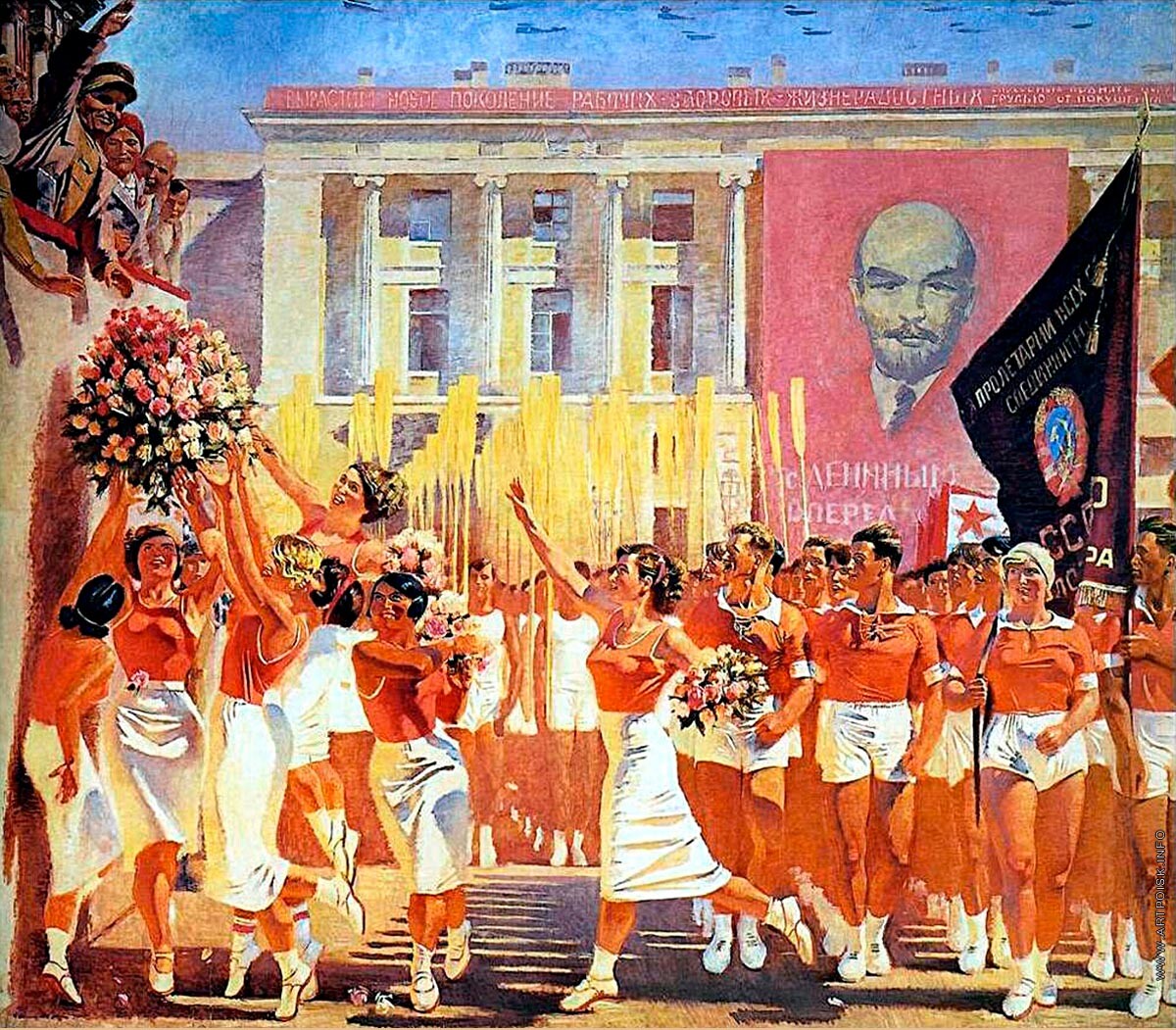 Although such background stories imply the dark side of propaganda art, it was, in fact, often far from grim. Many artworks had a positive effect on the public moral and promoted hope, friendship and a healthy lifestyle. Samokhvalov’s paintings of festivities and practice of sports were an iconic part of his oeuvre. Due to the fact that Samokhvalov possessed undoubted talent, his works became masterpieces of social realism.