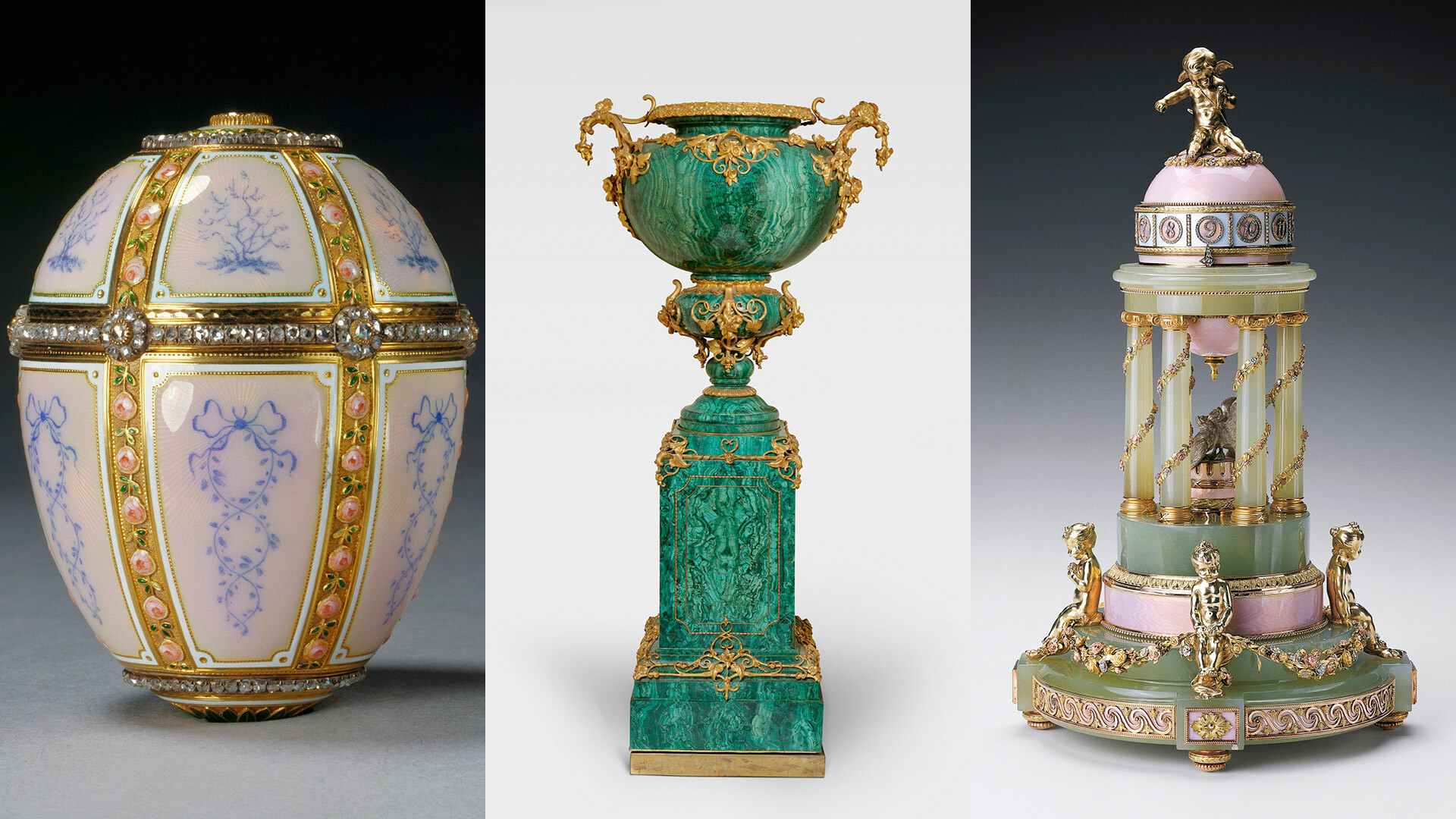 We already covered the jewels of the former imperial Romanov family in the Windsors’ box and how Elizabeth II received this magnificent Russian tiara. 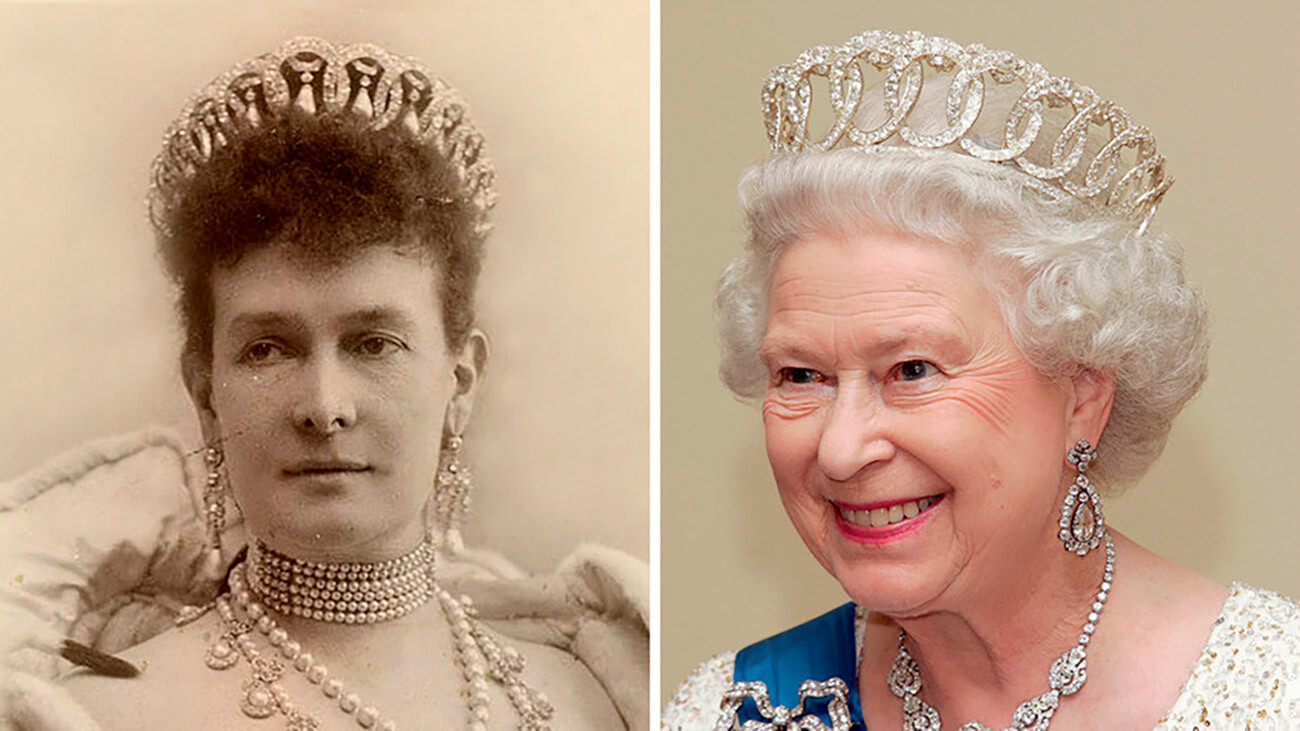 But, besides the jewelry that members of the monarchy wear on formal occasions, the Royal Collection housed in museums and royal residences across the UK contains other Russian treasures. 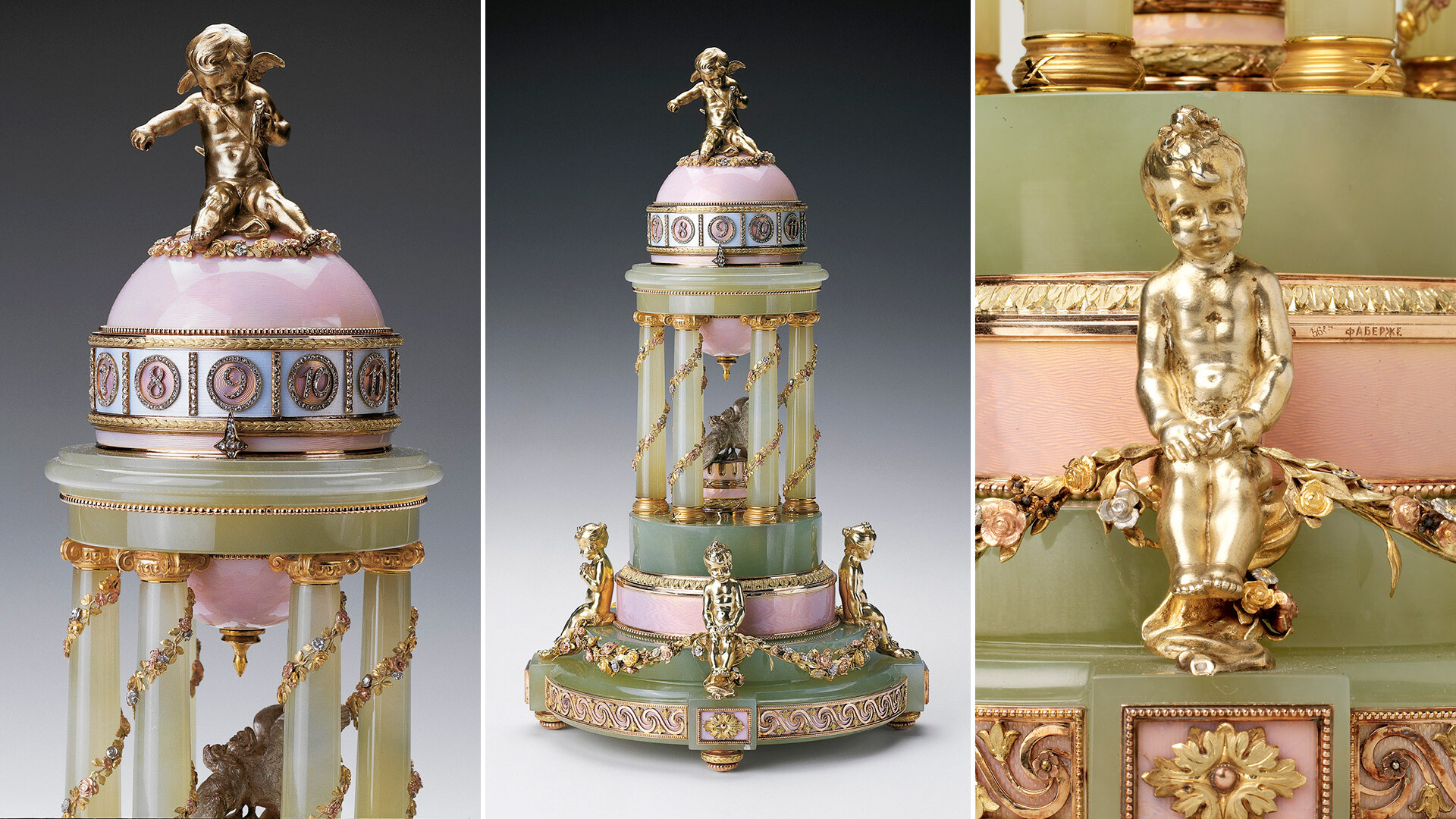 The British collection has a total of three Imperial Easter eggs made by Fabergé (we wrote about them here) and another one made for Russian entrepreneur Alexander Kelch. The Colonnade Egg is a jewelry clock dedicated to the birth of Tsarevich Alexei, the heir to the throne, in 1904. Angels symbolize the children of the last Romanovs.

Emperor Nicholas II gifted this clock to his wife for Easter 1910 and, after the Revolution of 1917, it was confiscated by the Bolsheviks and sold a few years later to Emanuel Snowman in London. In 1931, he sold it to Queen Mary and King George V. 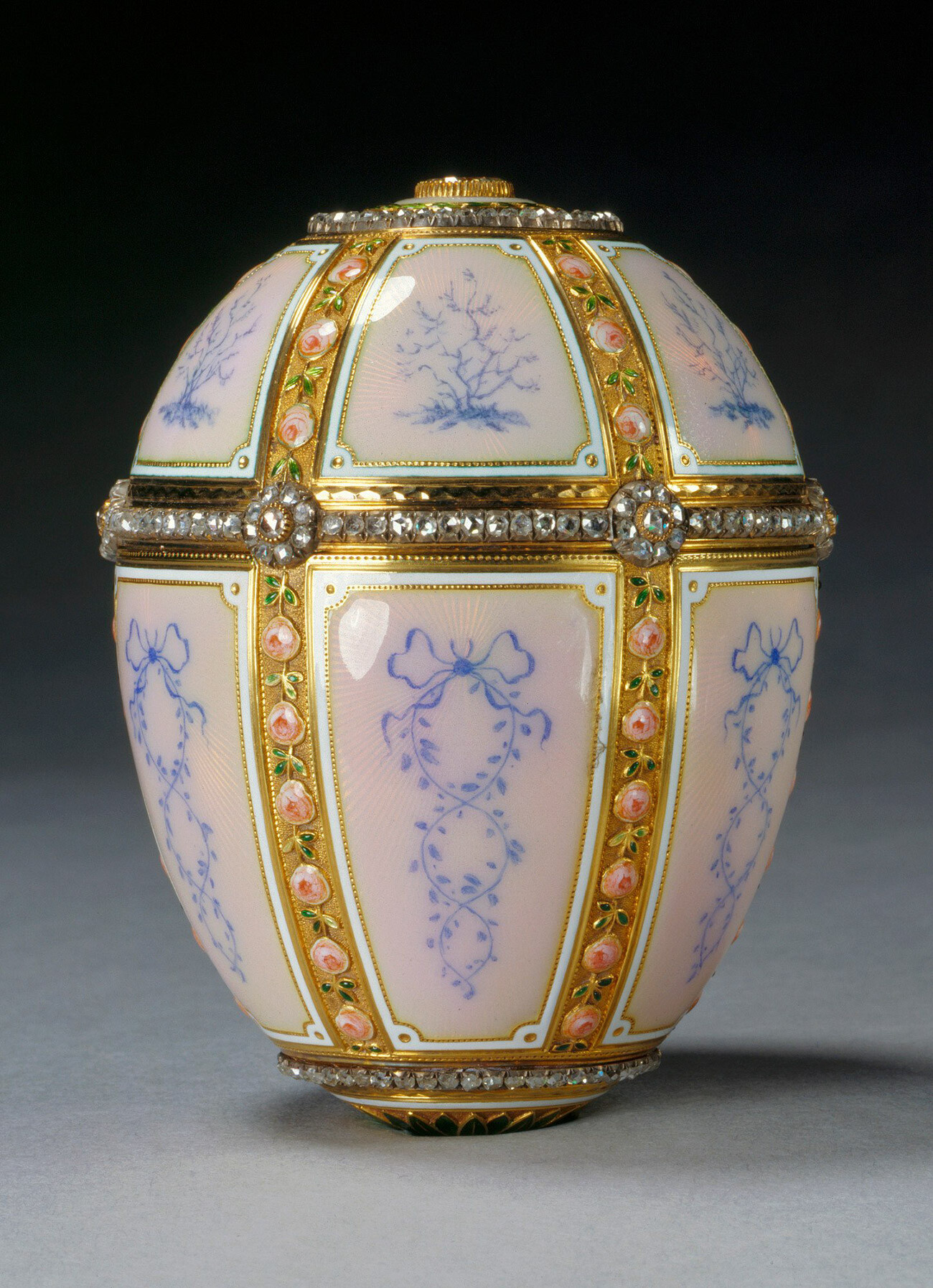 The cost of each Fabergé egg reaches millions of dollars today, but, even before that, they were worth a fortune. The largest collection (more than 50 eggs) was owned by the Romanovs. But the second largest collection of 7 eggs belonged to Varvara Kelch, wife of Siberian industrialist Alexander Kelch. Every year, from 1898 to 1904, he ordered her an egg for Easter. Varvara took the ‘Egg with panels’ with her to Paris in 1904 and sold it at auction in 1920. And, in 1933, King George V purchased it from the then-owner as a Christmas present for Queen Mary in 1933.

3. Enamel and topaz box by Ovchinnikov 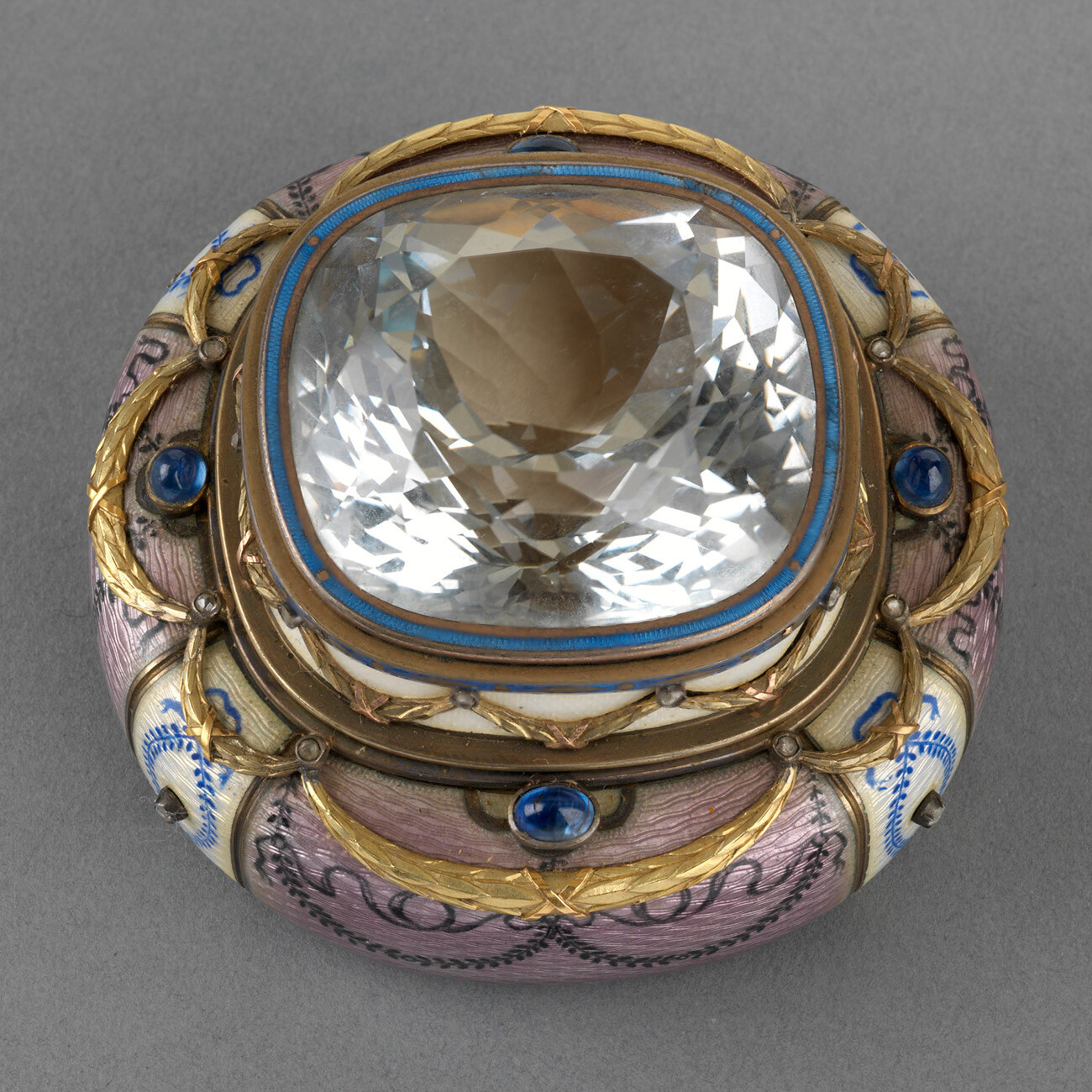 This nice piece was made by court jeweler Pavel Ovchinnikov (read more about him here).

The date of this tiny box is unknown (probably late 19th or early 20th century), but it was presented to Queen Mary on her birthday by the Royal Household, on May 26, 1928.

It is made of enamel and decorated with a huge blue topaz surrounded by sapphires. 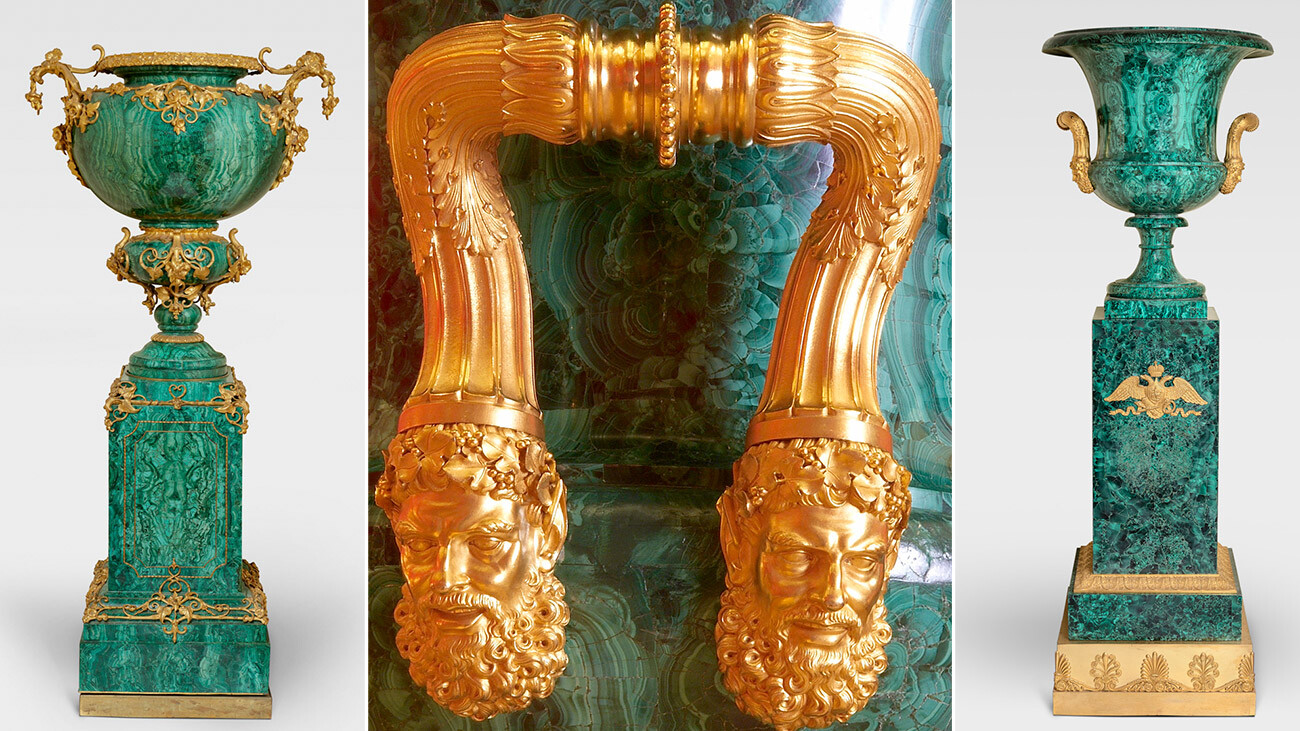 This decorative vase of malachite with a jasper pedestal decorated the chambers of George IV at Windsor Castle. It was presented to the British king by Empress Alexandra Feodorovna in 1827. The gift was a truly splendid one: malachite quarried in the Urals was considered one of the best stones for use in the interiors of palaces.

Another one Russian malachite vase was purchased by Queen Victoria and Prince Albert in 1851, after they saw it at the Great Exhibition. 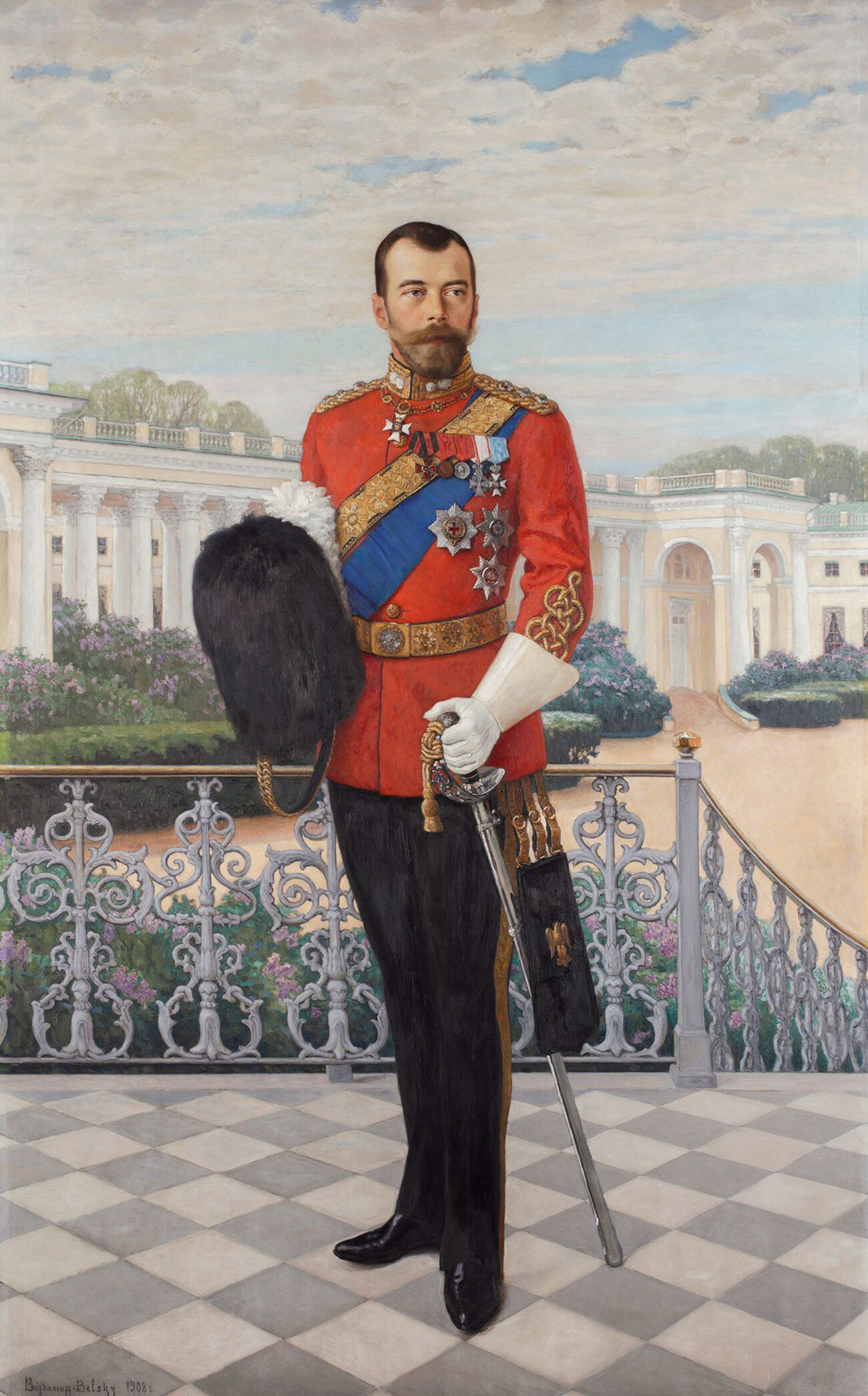 The Royal Collection holds portraits of the Romanovs, mostly by famous foreign artists. Here you can see Alexander I by George Dawe, 1826, Nicholas I by Franz Kruger, 1847 and others. This portrait of Nicholas II was made by Russian master Nikolai Bogdanov-Belsky. In fact, he usually depicted scenes from rural life, but he also made several portraits of the Russian royal family. The last Russian emperor gave his portrait to Edward VII after their meeting in June 1908. It was placed in the Centre Room at Buckingham Palace. 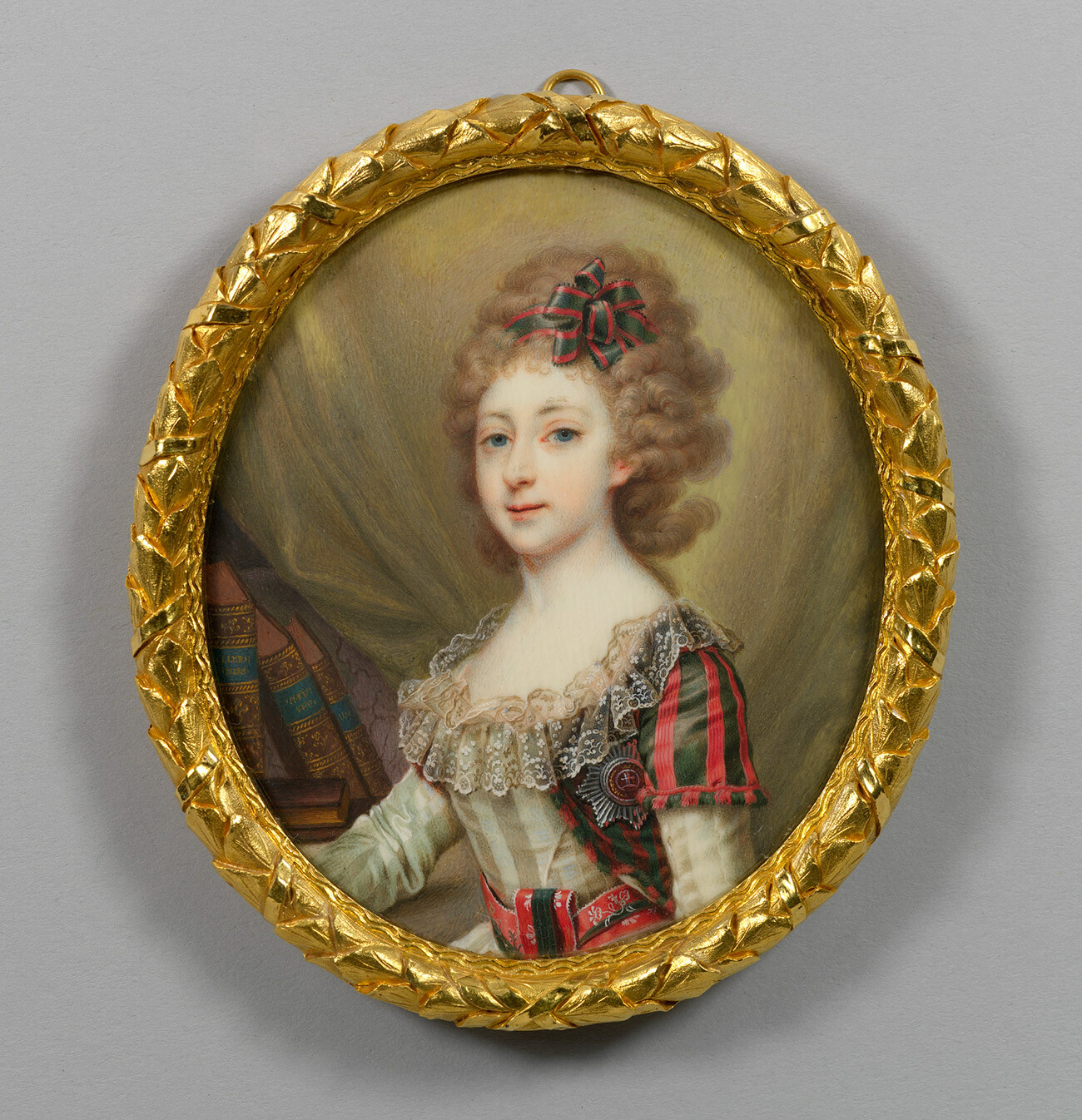 This portrait depicted the second daughter of Emperor Paul I Elena. In fact, this is a miniature of the full-size painting, one of a set of portraits of all Paul’s four daughters. The exact author of the miniature is unknown, but this is most likely Petr Zharkov, who made similar artworks that are now on display in Pavlovsk near St. Petersburg. This miniature has been in the Royal Collection since the 1870s.

7. Icon from Solovetsky Monastery, first half of the XVII century 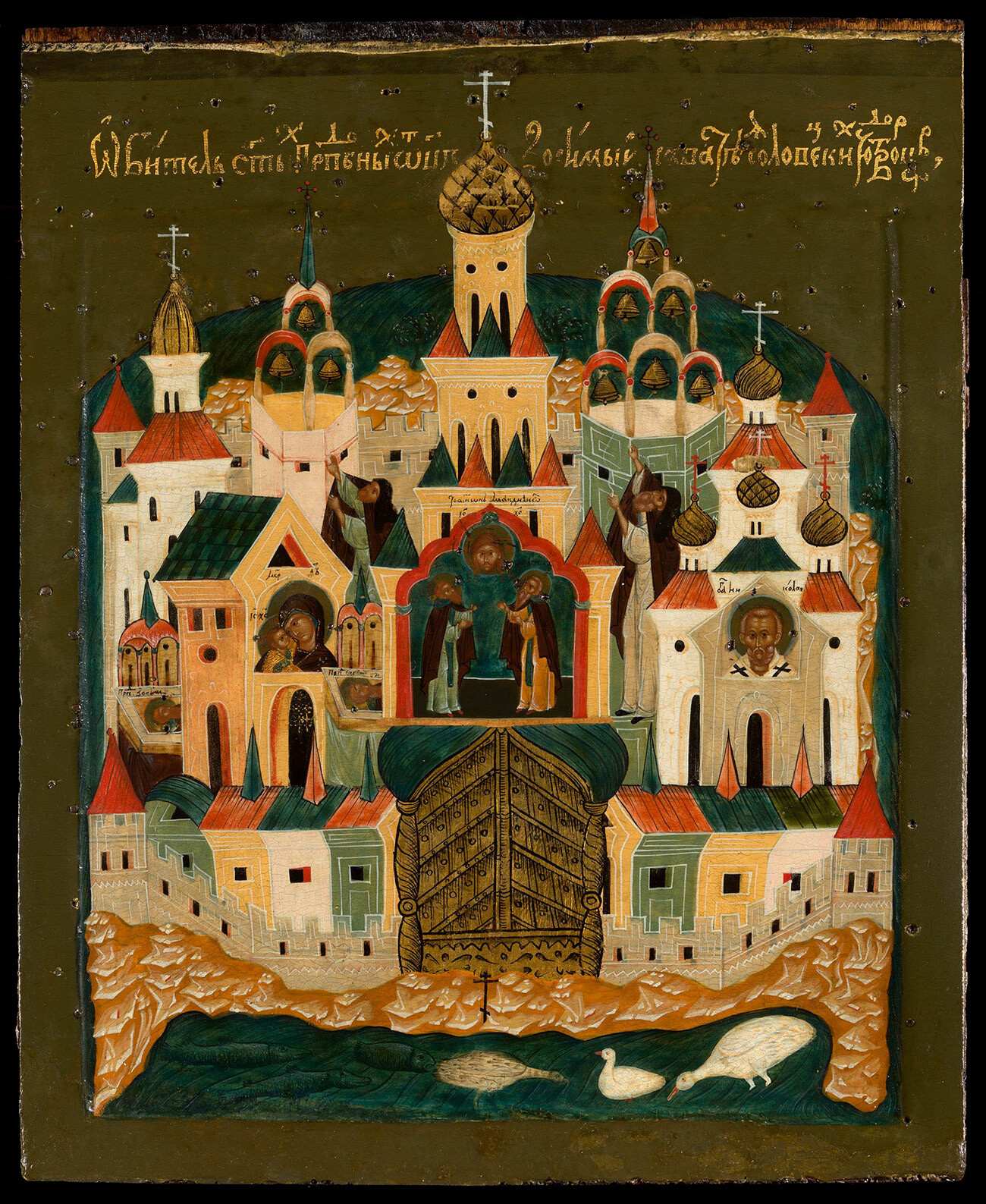 This ancient icon depicts the Solovetsky Monastery (est. 1436) at the White Sea, one of the most famous monasteries in Russia. Despite the fact that this icon is about 400 years old, the high level of detail and excellent condition is amazing. According to the Royal Collection Trust website, there are about 20 such old icons known to exist, and this one belonged “most likely for one of the monks of the monastery”. This icon was in the collection of the German Prince Ludwig Kraft Ernst von Oettingen-Wallerstein (1791-1870), which was bought by Prince Albert. 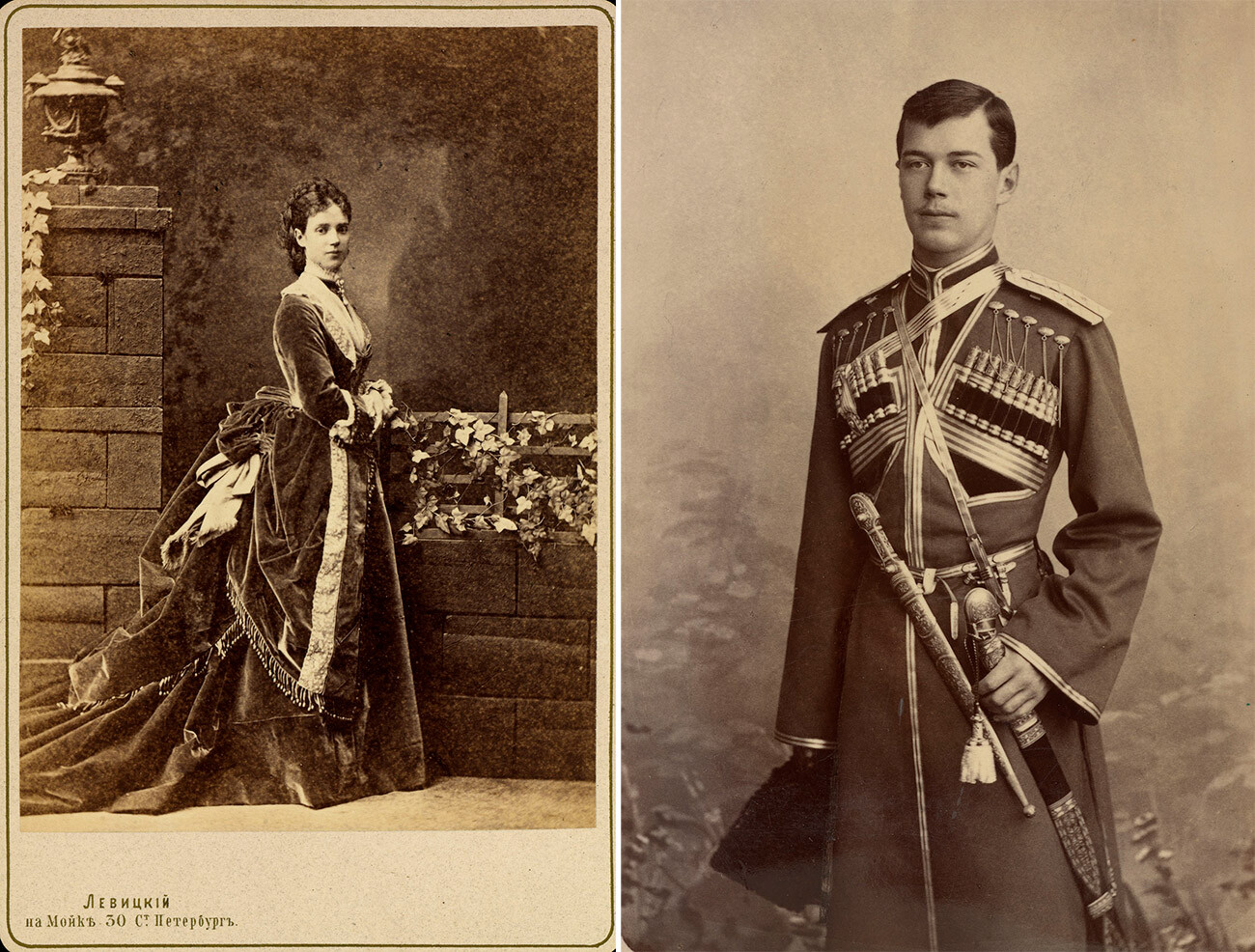 Sergey Levitsky (1819-1898) was the court photographer of the Romanovs. Just imagine, four generations of emperors posed for him! In addition, he photographed all the famous Russian writers of his time: Nikolai Gogol, Leo Tolstoy, Alexander Ostrovsky, Ivan Turgenev and others. In the British collection, there are dozens of his works, which are more than 130 years old. Most of them are photos of the Romanovs. 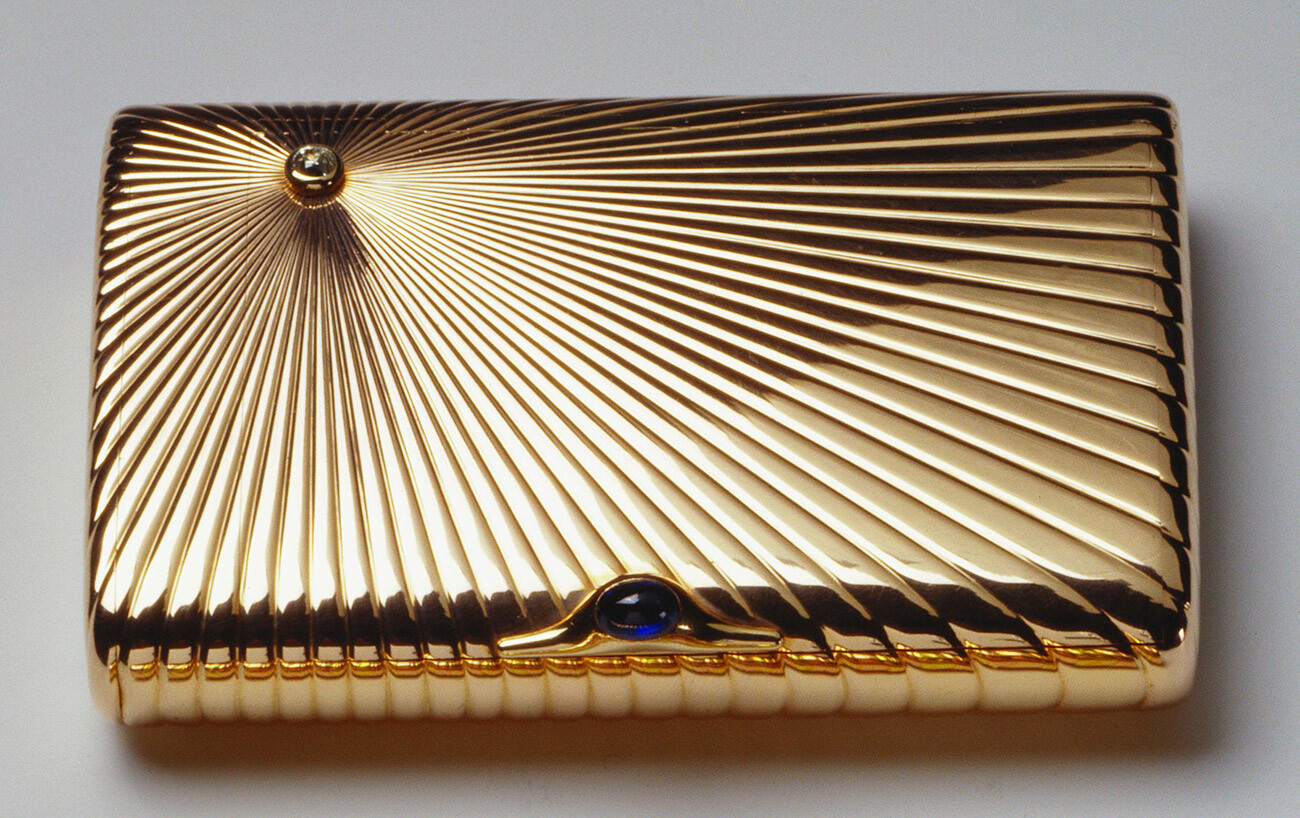 Several jewelry cigarette cases that belonged to the Romanovs are now museum pieces. For example, this gold cigarette case with a diamond and sapphire was made by Faberge and believed to have been a favorite cigarette case of Tsar Nicholas II. The Romanovs ordered similar cigarette cases especially for their relatives in Britain, King Edward VII and Queen Mary. They are also kept in the collection. 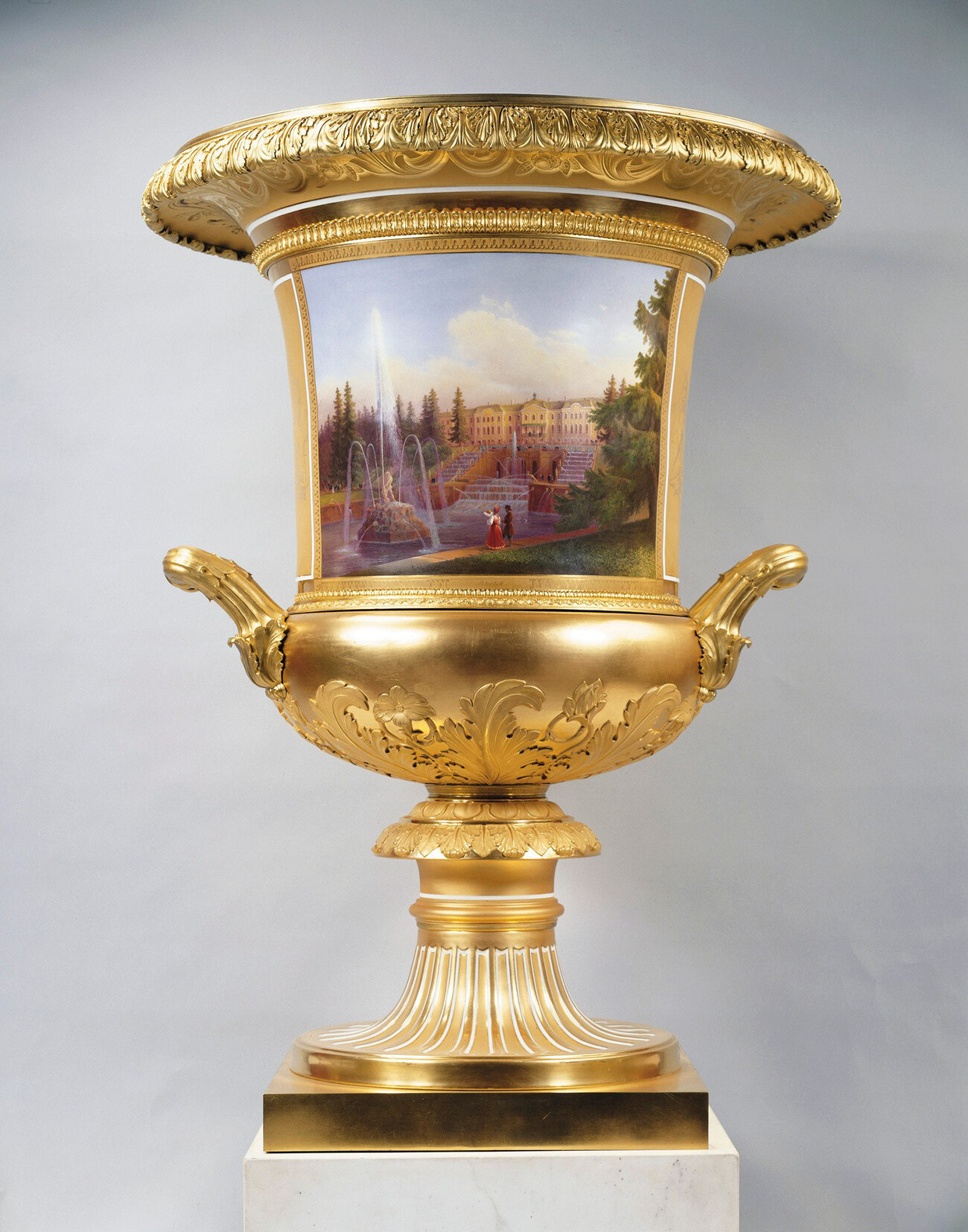 The visit of Russian Emperor Nicholas I to Britain in 1844 was the first in 30 years, when, in 1814, the both royals celebrated the defeat of Napoleon. When he returned home, Nicholas I sent this vase made by the St. Petersburg Imperial Porcelain Factory to Queen Victoria. It is still kept at Windsor Castle.