How a serf became a goldsmith to the Romanov family 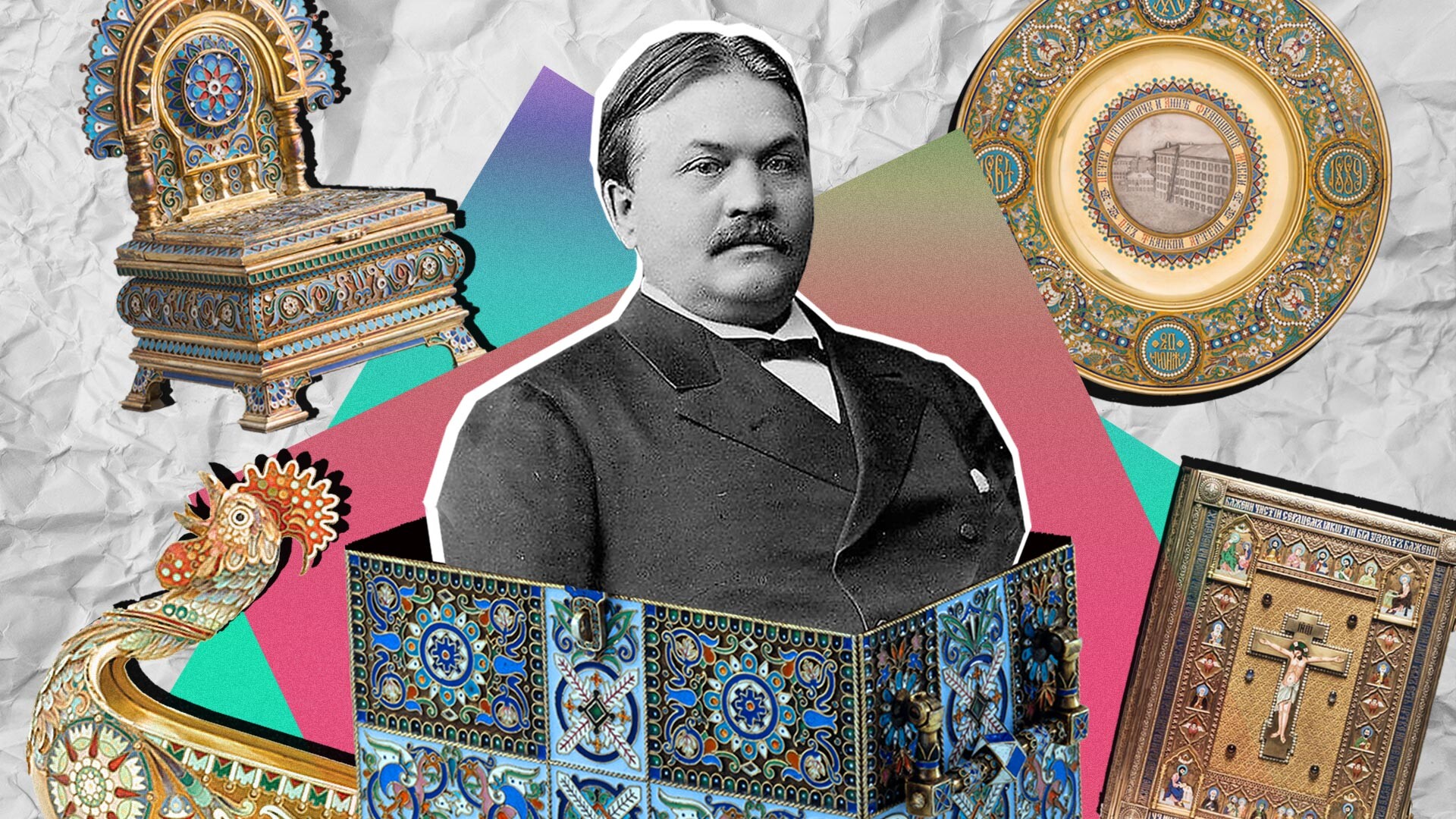 The name of Carl Fabergé is world famous, yet he was far from the only jeweler at the imperial court. Cigarette cases, goblets, dinnerware sets, ornamental boxes, precious decorations for books and albums — in the Russian royal family, almost every household item was a piece of jewelry crafted by the finest artisans. One of them was Pavel Ovchinnikov. His was a truly meteoric career. He was not the heir to an illustrious family business, but founded his own. 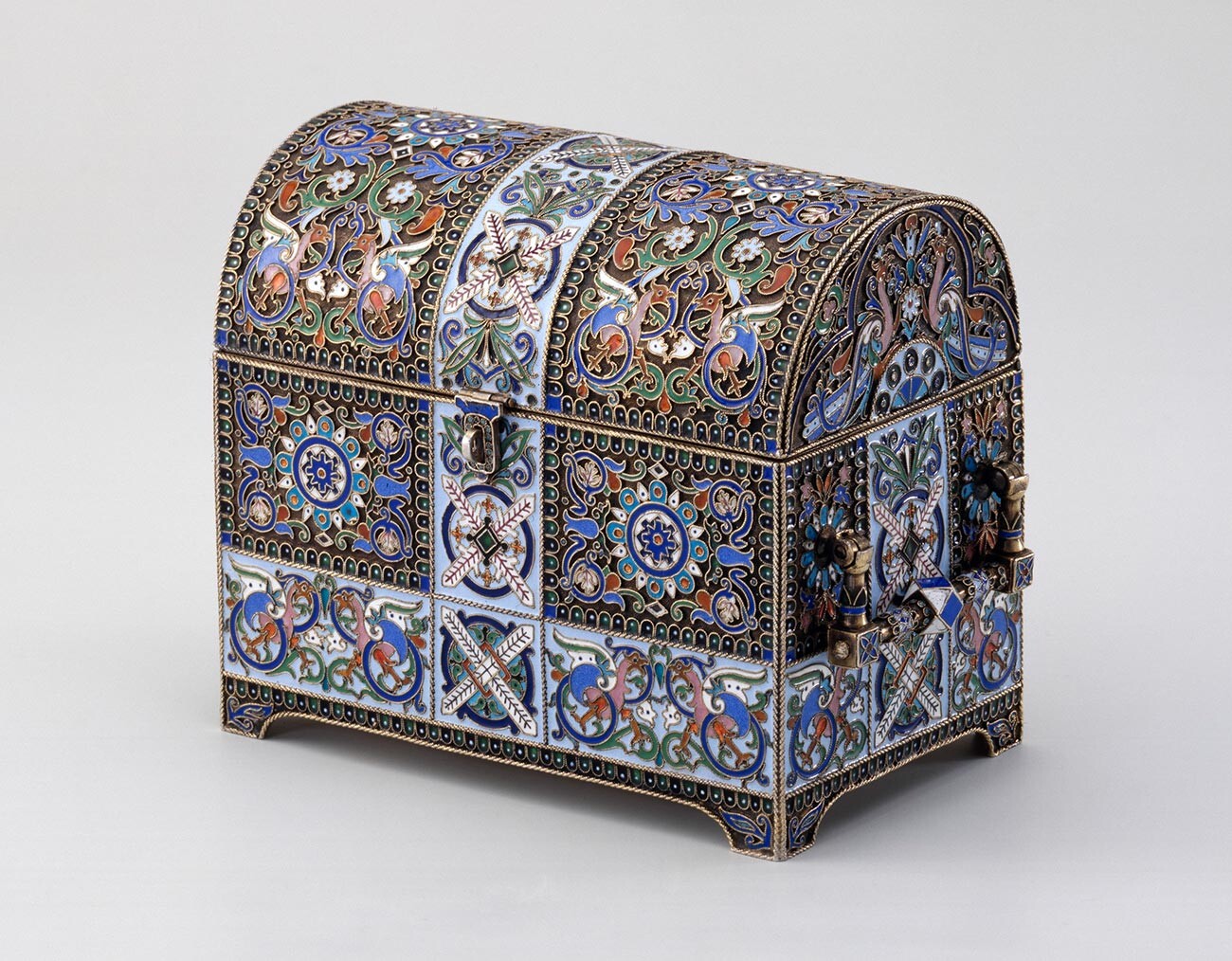 Ovchinnikov was born not with a silver spoon in his mouth, but rather as a serf in 1830, a full 31 years before the abolition of serfdom. But he was lucky in one respect: all members of his family were serfs of the noble line of Volkhonsky princes: first Pyotr Mikhailovich, then Dmitry Petrovich, who held high positions at court and appreciated the arts. 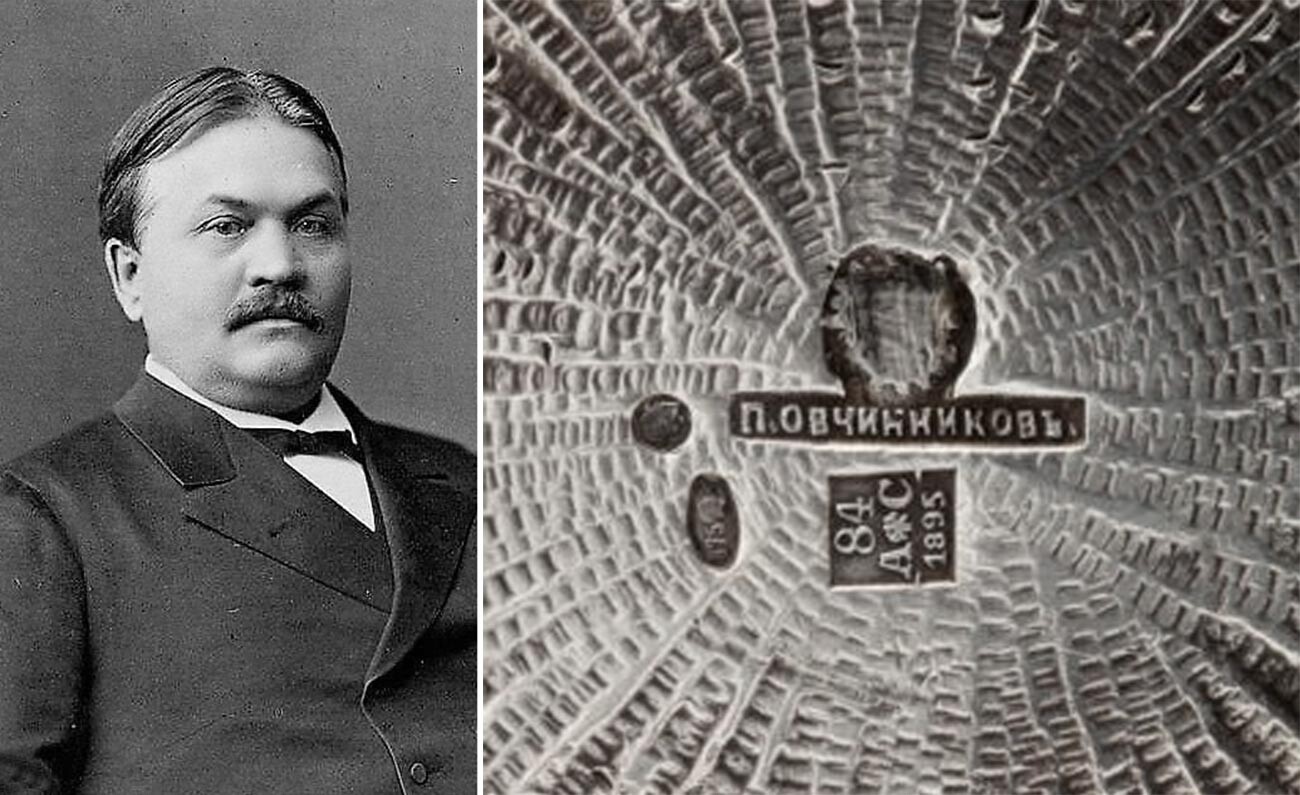 The young Ovchinnikov’s talent manifested itself early. As the newspaper Moskovskie Vedomosti wrote in Ovchinnikov's obituary in 1888, the boy's "alacrity and quick-wittedness" attracted the attention of Prince Volkonsky, who discovered in him the ability to draw. For the "systematic development of the artistic faculties" the boy was sent to Moscow to study under a master jeweler. 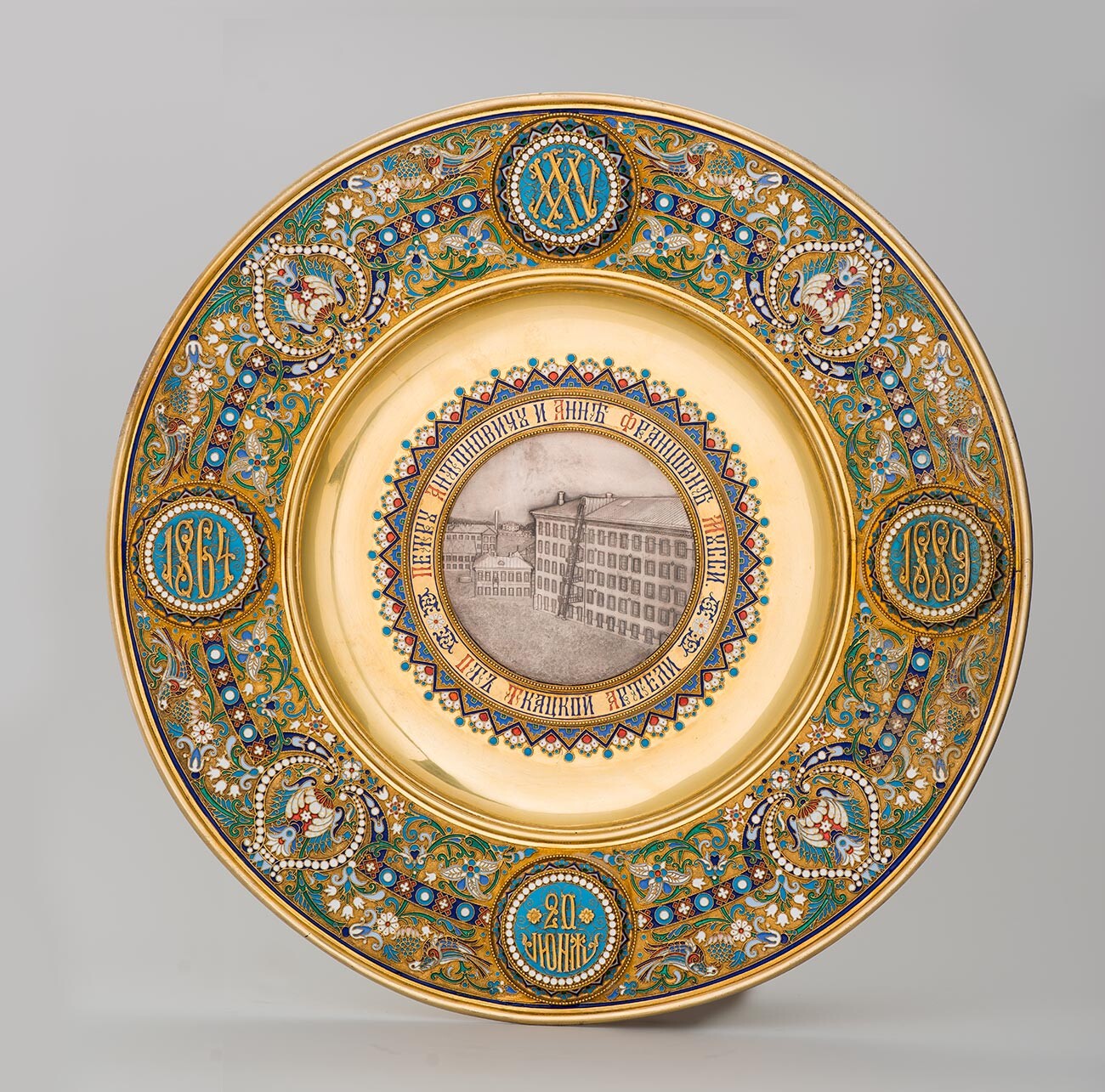 Ovchinnikov worked so diligently that he quickly progressed from student to apprentice to master craftsman himself, able to earn his affranchisement (i.e. buy his freedom). According to other sources, his landlords granted him freedom for his talent and success.

In 1850, Pavel married and spent his wife's dowry on equipment for his own jewelry workshop; three years later he opened a gold and silver jewelry factory, whose revenue grew almost exponentially year on year. By the age of 24, the former serf was handling an annual turnover of 1.5 million rubles, a vast sum at that time. 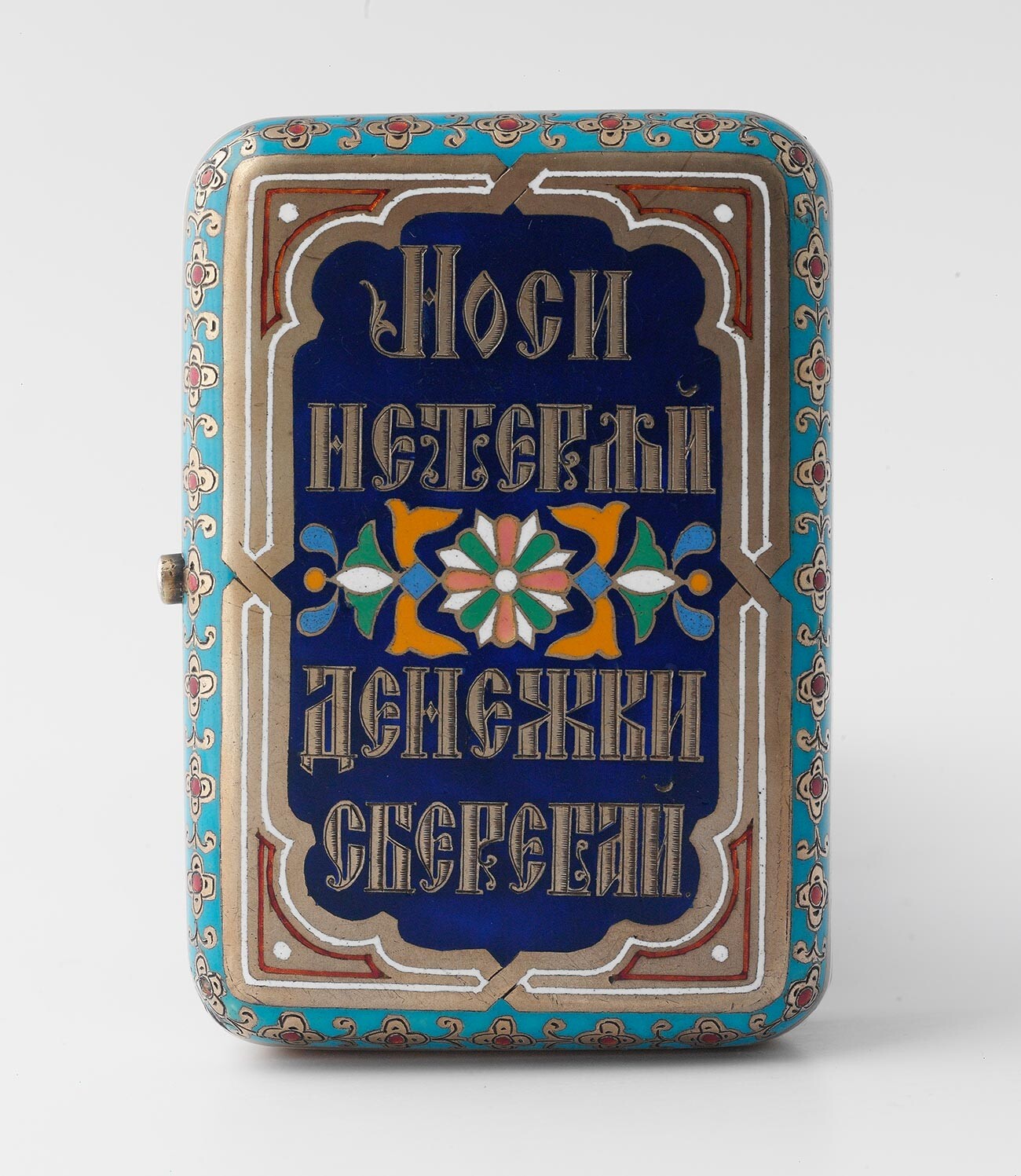 The factory did all kinds of jewelry work: embossing, engraving, enamel painting, blacksmithing, gilding. It employed a total of 300 master craftsmen, whose schedule and salary were man-managed by Ovchinnikov himself. 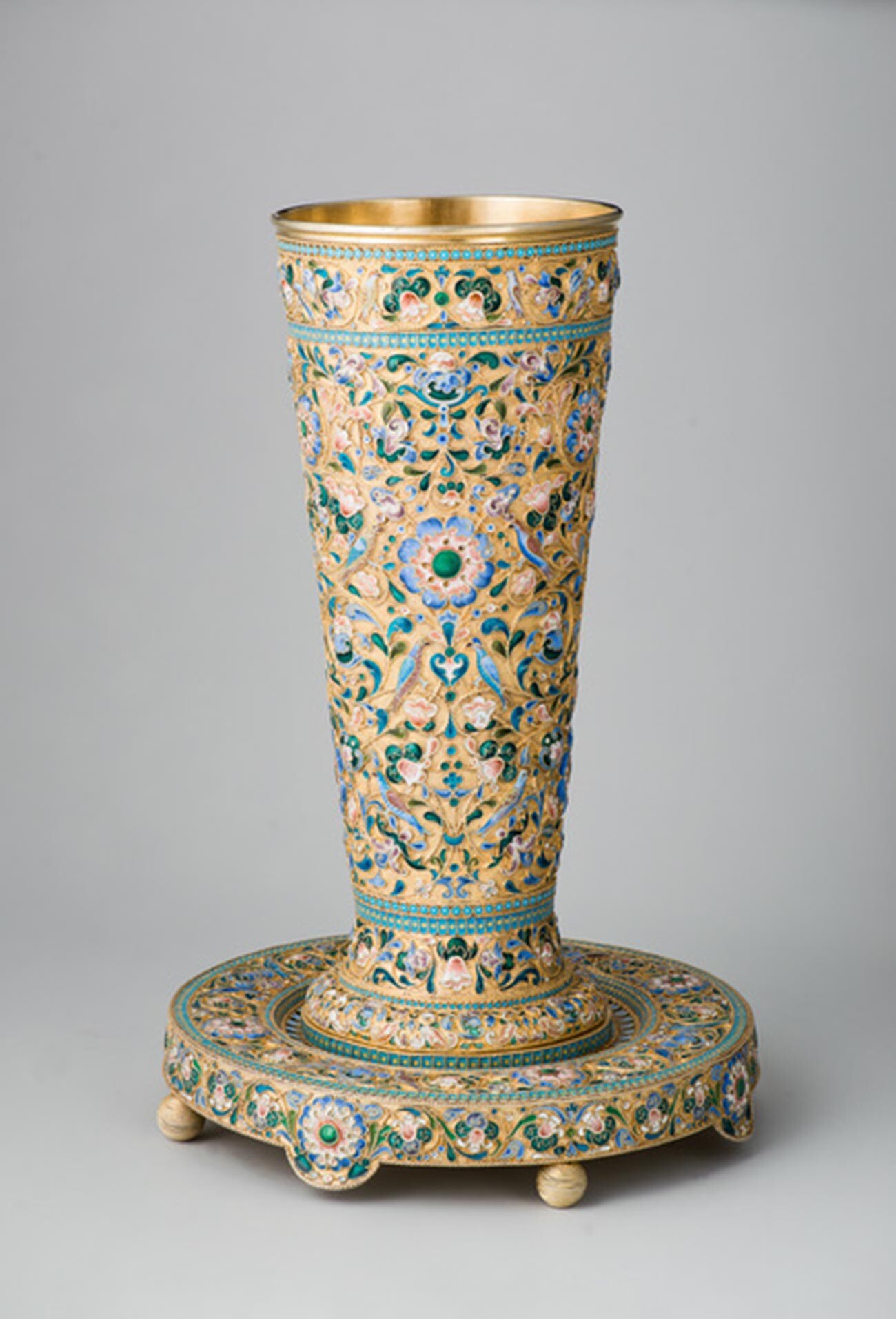 In 1867, Ovchinnikov began offering “technical drawing, sculpture and embossing” training courses for his craftsmen to develop their artistic abilities. 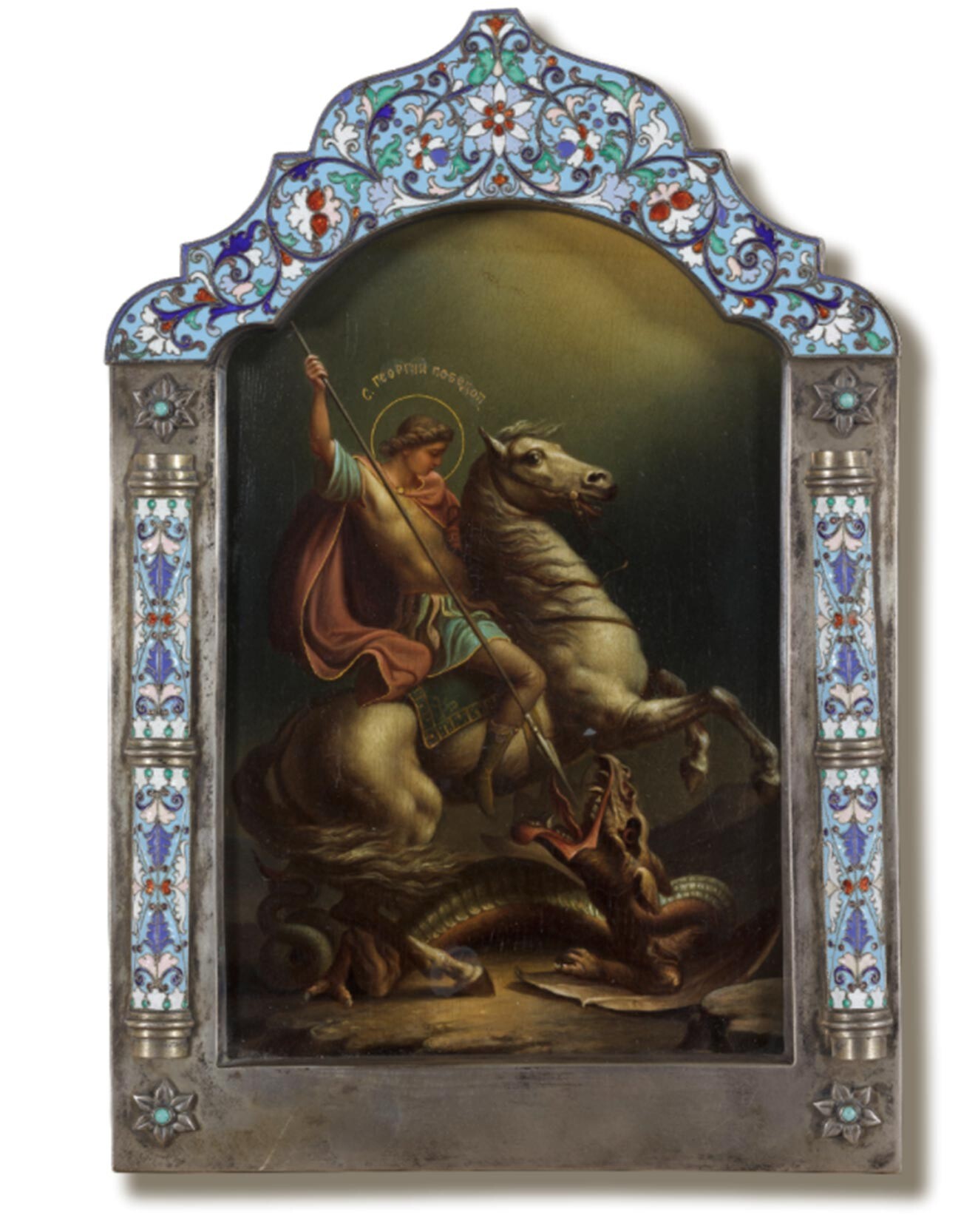 St. George and the Miracle of the Serpent, 1879

Ovchinnikov soon became the first factory owner to open an on-site school for children, where they received both jewelry-making classes and basic primary education.

Enamel and the Russian style 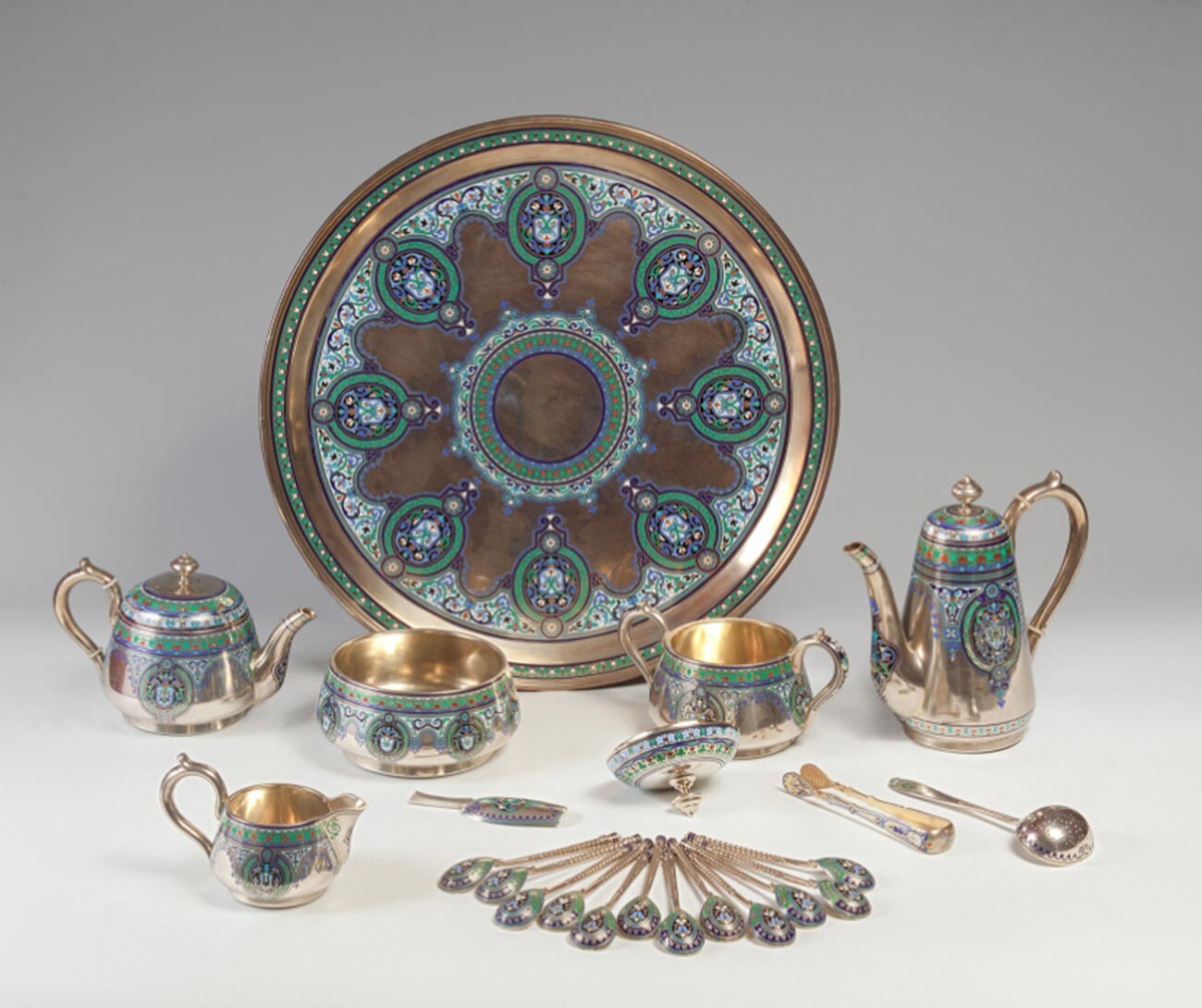 In the 1860s, Ovchinnikov's jewelry firm acquired worldwide fame. It took part in international exhibitions in Moscow, and received a silver medal at the International Exhibition of 1867 in Paris. Ovchinnikov's items were noticed in high society; he became an official supplier to the court of the future Emperor Alexander III and opened a branch in St Petersburg. Later, Ovchinnikov confirmed this honorary title when Alexander came to the throne, and his company went on to serve the imperial court for more than 40 years. 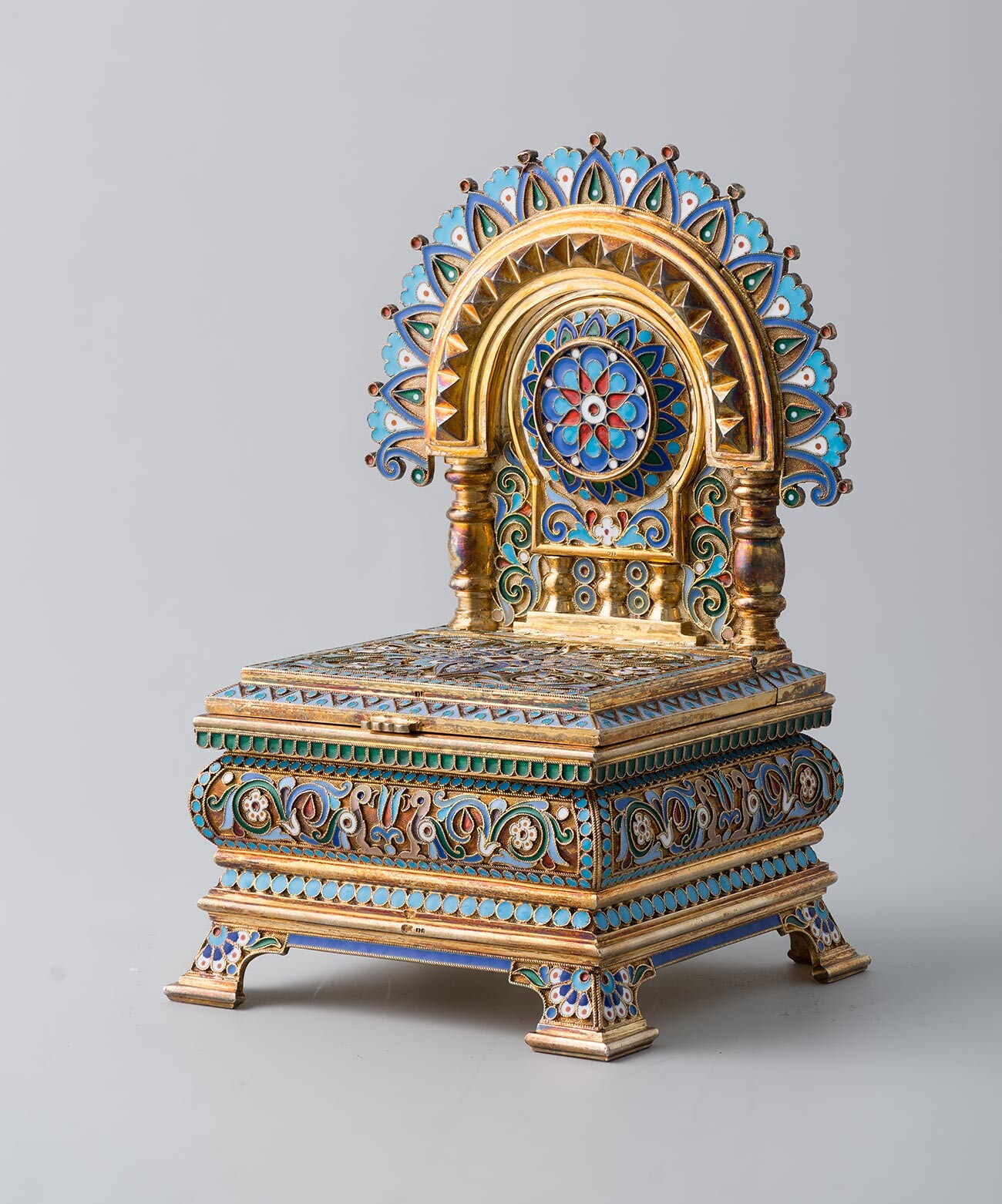 The late 19th century saw a fashion for all things Russian-style — and Alexander III was one its leading devotees. Sensing this, Ovchinnikov himself became a trendsetter. With his magic touch in jewelry art, he revived the production of enamel with Russian motifs: birds, kokoshniks, domes and other folk-craft elements. Many of Ovchinnikov's masterworks were based on sketches by the best artists of the day, among them Viktor Vasnetsov. 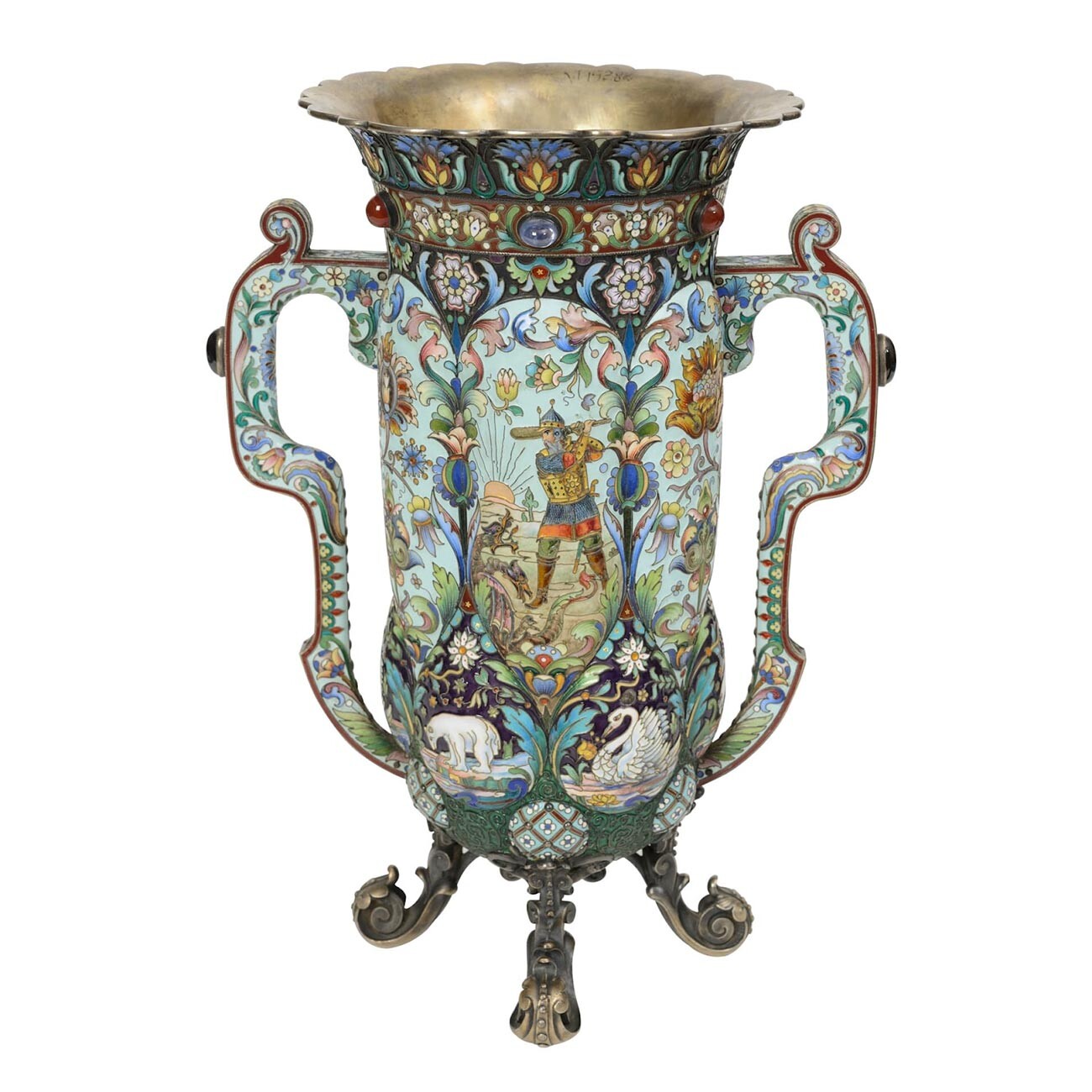 Among other things, Ovchinnikov's firm, produced long-forgotten items that had once adorned the royal table: old-style cups, caskets and goblets. In making them, the filigree technique, another traditional craft, which involved twisting and plaiting fine precious metal threads, was often applied. 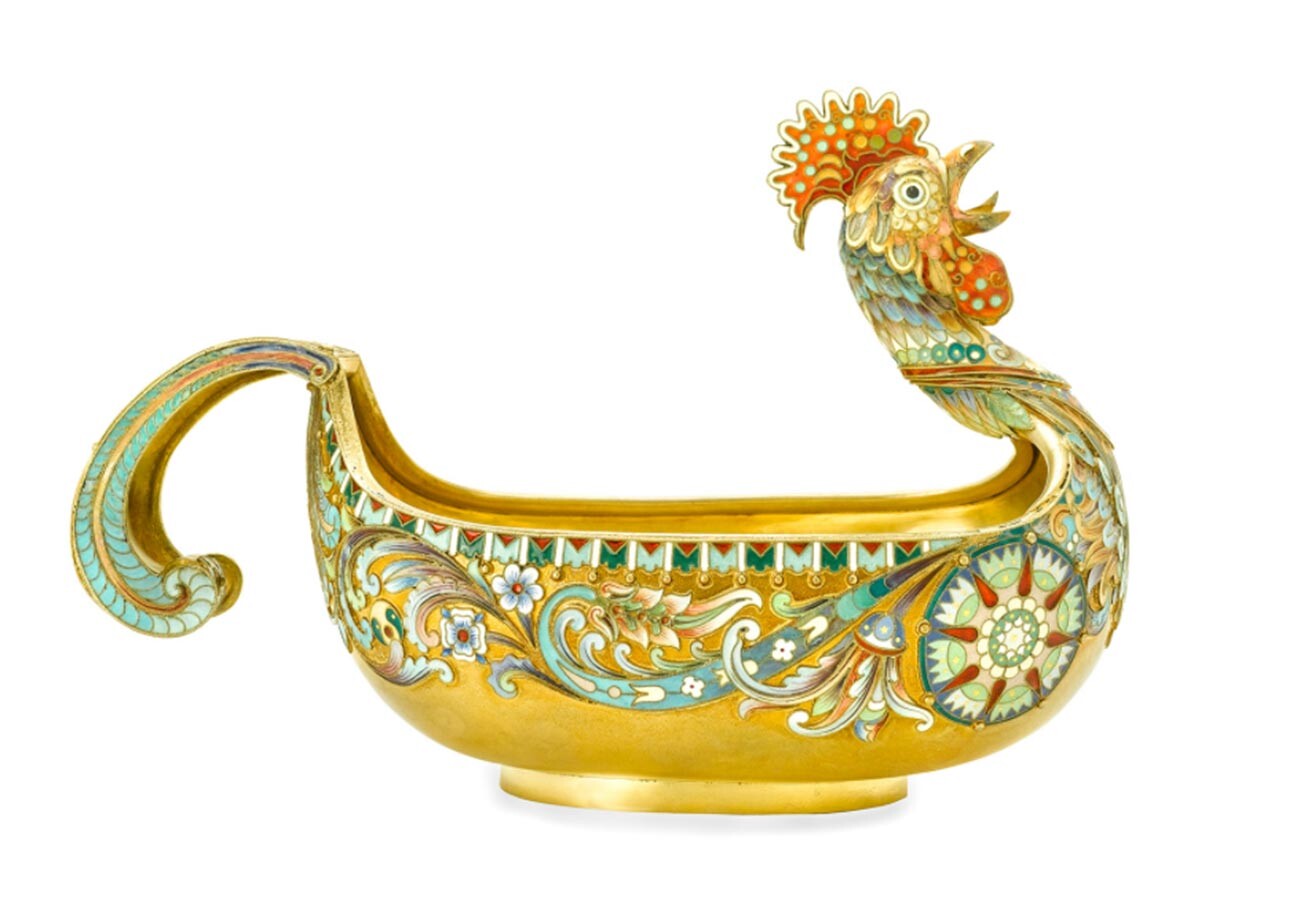 Ovchinnikov and his master jewelers also made frames and settings for icons and books — those for the Gospels of the Cathedral of Christ the Savior and the Church of the Savior on Spilled Blood became especially famous. 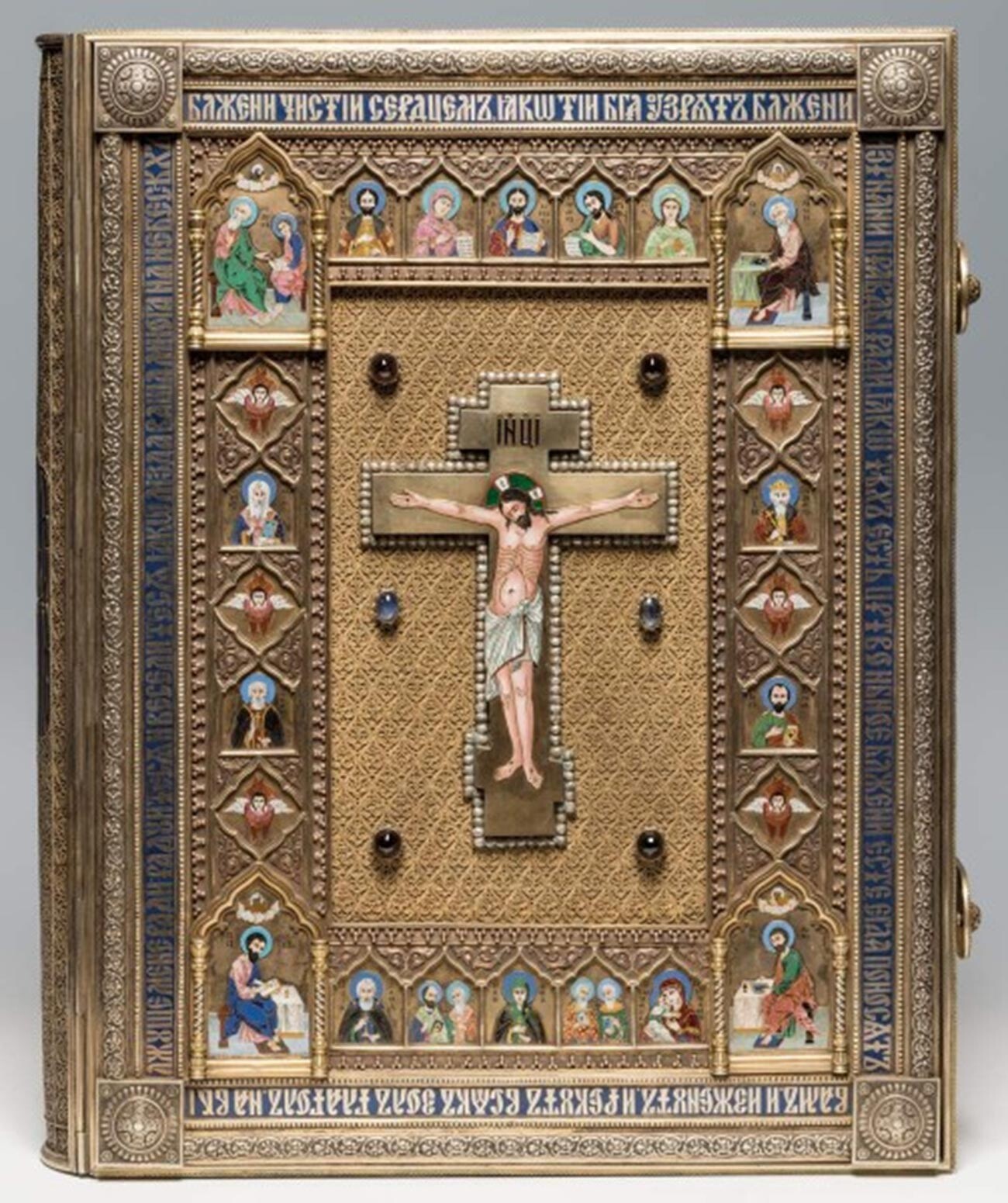 Altar Gospel for the Church of the Savior on Spilled Blood, 1882

After Pavel's death in 1888, the firm was successfully managed by his sons. However, the revolution of 1917 and the fall of the monarchy put an end to its glorious history. Fortunately, a large number of Ovchinnikov items were preserved and found their way into museum and private collections around the world. 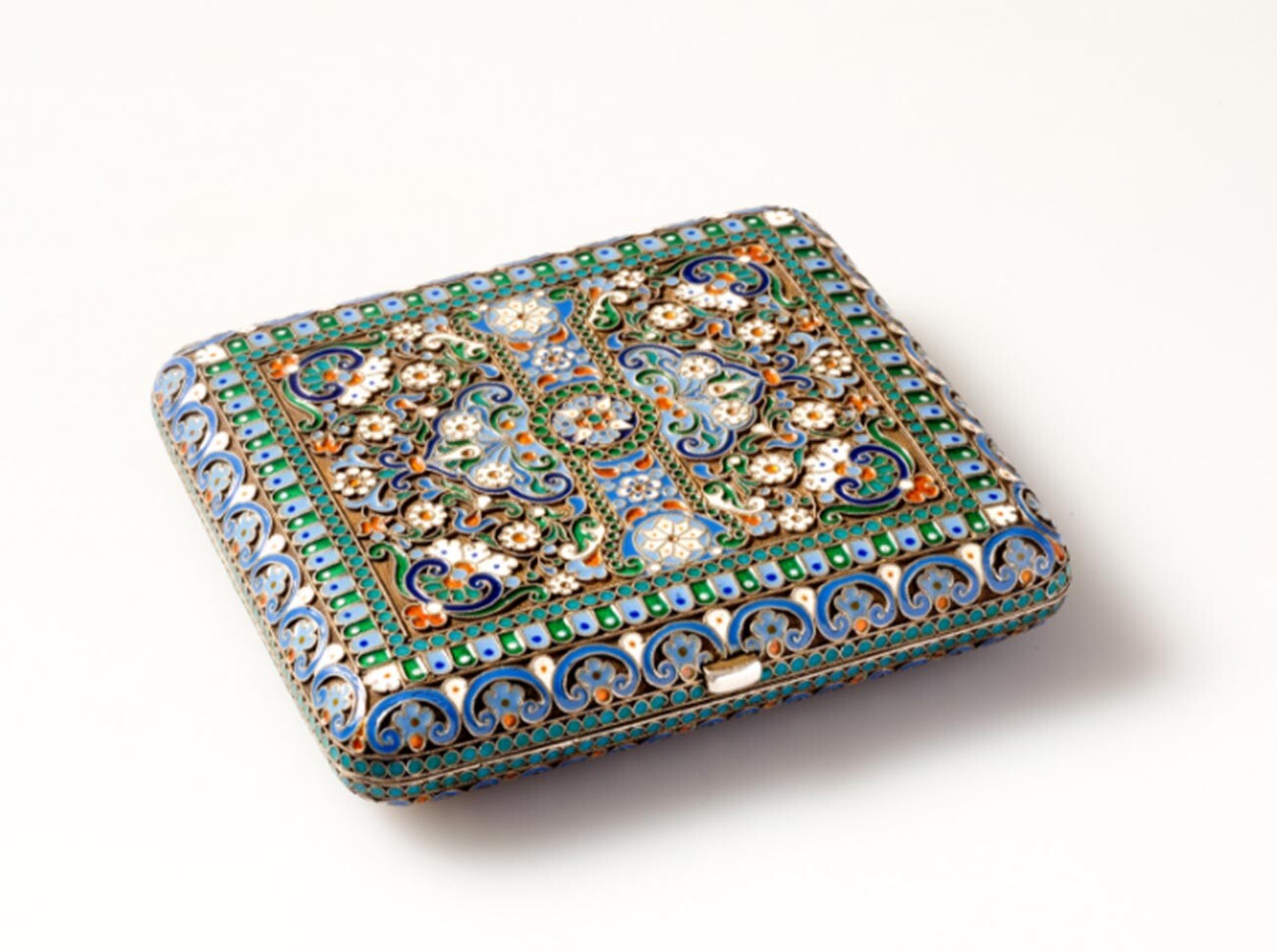