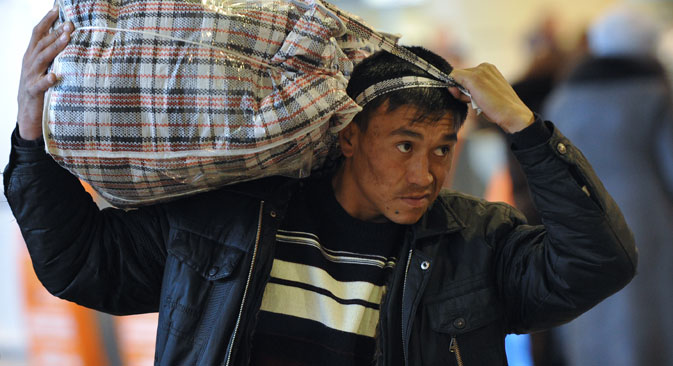 The experiences of Russian shuttle traders were similar to those of medieval merchants.

Back in 1993, the large wholesale markets of Seoul were flooded with a new type of buyer – the Russians had arrived in rather large numbers.  Large and somewhat noisy men and women were often seen at the Seoul markets, where for a few years Russian signs were ubiquitous.

The 1992-97 period was a time of a short but intense flourishing of a phenomenon known as ‘shuttle trade’. South Korea was by no means the only place where Russian shuttle merchants operated in those years, but it did play a significant part in their story.

The collapse of the communist system in 1992 plunged the ex-Soviet states into deep recession, but it also brought with it great opportunities for the entrepreneurially minded. Virtually everything was in short supply, and therefore could be sold with great profit – especially clothes, footwear and basic consumption goods. The overseas travel restrictions were much eased at the time, so entrepreneurial types decided to go overseas, to the countries where valuable merchandise was produced, and bring it back, to sell for a large profit. South Korea, needless to say, was one of these countries (China and Turkey being others).

In the early 1990s, ‘shuttle trade’ (known as such since this activity required regular trips along the same or similar route) was one the most common types of business activity. It was not that difficult to find money for the initial investment and then depart on a risky trip to the Orient.

Indeed, the experiences of the Russian shuttle traders were remarkably similar to those of medieval merchants. Credit was difficult to obtain, wire money transfers and credit cards were almost unheard of, so many thousands of dollars had to be taken in cash in order to buy the goods in question. The deals had to be struck on spot, and in many cases the merchandise was moved to cargo companies on the backs of the merchants. Marco Polo would find himself at home in such an environment.

In most cases, these merchants used the services of specialized tourist companies. Such companies organized weeklong trips to Seoul that specifically catered to the needs of the small-scale trader. Within a week, they could find items for sale, made deals and received the items in question, and arranged for their shipping.

The Korean wholesale markets – especially the Tongdaemun market in Seoul – began to adjust to the new arrivals with surprising speed. Korean students of Russian suddenly found employment opportunities in the market. Even Russian language signs began to pop up.

The shuttle trade itself was highly profitable. A reasonably successful shuttle trader could double his/her money in just three or four trips.

Most of the shuttle traders who specialized in the Korean market (and specializations developed very quickly) visited South Korea once a month. Some of them developed a surprisingly good knowledge of the country. I remember once sitting next to a middle-aged woman who was also a successful shuttle trader who spent the long flight telling her friends about life in South Korea. I could not help but admire her knowledge and understanding of the country and its culture.

The golden age of shuttle trading did not last long. Soon Russia began to develop a more normalized commercial environment, so by the late 1990s the shuttle traders with their bags stuffed with US banknotes and willingness to shift huge sacks of goods on their backs were replaced by regular businesses, not much different from say European or American companies. However, most of these new companies, which are still much present in Seoul are run by people who began as shuttle traders twenty years ago.

This article was first published by RBTH Asia