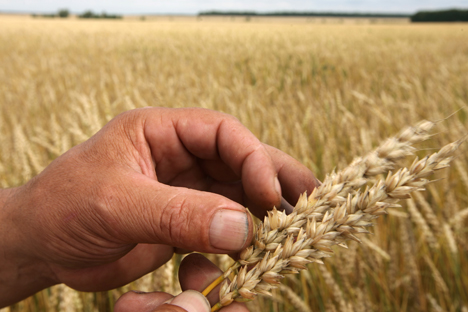 According to Rusagrotrans data, Russia imported 65,000 tons of grain, including 32,000 tons of wheat, in December of last year. Source: RIA Novosti.

Russia’s Ministry of Agriculture is currently reviewing a number of strategies aimed at containing the upsurge in grain prices. Apart from stepping up the sale of its reserves, the government agency may lift its 5 percent import duty on grain. This measure has particular importance for Russia’s Northwest. According to analytical estimates, traders will be able to earn up to $20 per ton of grain if the duty is lifted.

RBC Daily has learned that the Ministry of Agriculture is planning to hold a meeting in the near future to discuss the possibility of lifting the 5 percent import duty on grain. The agency refused to make any official comment, instead promising to make an announcement afterward on the results of the meeting.

Companies working in the agricultural market confirmed that, in the middle of December 2012, government officials had started collecting information on grain import volumes and regions. As of today, the key importer of grain to Russia is Kazakhstan, as supplies from this country are exempted of customs duties. By contrast, imports from non-CIS states are subject to a 5 percent import duty.

Russia’s Grain Union President, Arkady Zlochevsky, believes this 5 percent duty undermines grain trading activities. According to Zlochevsky, the tax renders grain supplies from France or Germany to Russia’s Northwest unfeasible. Some industry experts estimate that traders will be able to earn as much as $10-20 per ton of imported grain after the duty has been lifted.

Data obtained by the SovEcon analytical center suggest that lifting the duty will increase the appeal of importing goods significantly. Sovecon CEO Andrei Sizov adds that the margins for importers may shrink if global prices grow or domestic prices fall. He believes that a potential rise of import supplies, coupled with expanding sales of the government-owned intervention grain, may contain the growth of prices on the domestic market.

According to Pavensky, grain imports may start to soar as soon as February 2013 – in particular, grain from Kazakhstan. In the first half of 2013, Russia’s neighbor will be able to supply the Russian market with 200,000-250,000 tons of wheat monthly.

The overall volume of wheat to be imported by the domestic market this agricultural year – which ends on June 30, 2013 – may amount to approximately one million tons. “There is nothing to be afraid of with regard to imports,” Pavensky claims. “Take the EU, for example, which is one of the leading global exporters of milling wheat: and yet it imports several million tons of wholegrain and fodder wheat every year.” He points to the 2011–2012 crop year, during which Europeans exported 16.6 million tons of grain, including 7.4 million tons of wheat.