Why is Russia’s Central Bank planning to print 1 trillion rubles? 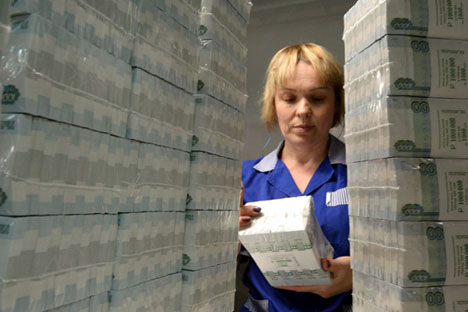 An employee of a Perm printing factory of the Federal State Unitary Enterprise “Goznak” checks a quality of the thermal stencil package.

Russia’s Central Bank is to inject 1 trillion rubles ($15 billion) in banknotes into circulation in December, allegedly to cover a seasonal demand for cash.

The regulator’s first deputy chairman Georgy Luntovsky announced the upcoming cash issue on Nov. 12. According to the Central Bank, the amount of cash in circulation in Russia exceeded 7.7 trillion rubles ($115.7 billion) as of Oct. 1.

The head of the Bank of Russia, Elvira Nabiullina, said that the decision on the issue has been made due to the growth in the demand for cash that typically occurs at the end of the year.

Where does the shortage of cash come from?

According to Central Bank statistics, the volume of cash in open circulation grows annually in December and then falls again at the beginning of the new year. For instance, in December 2014, the amount of cash increased by 914 billion rubles ($13.7 billion) to 8.8 trillion rubles ($132.3 billion), while by the end of January 2015 it had dropped to 7.7 trillion ($115.7 billion).

"Usually in December, the budget spends up to 40 percent," said Vladimir Tikhomirov, an economist with the BKS Financial Group, who attributes the increase in cash to a growth of budgetary spending. In addition, the population starts to withdraw money from accounts more actively in anticipation of the holidays.

"The further reduction of the ruble mass can be explained by capital outflows, the transfer of rubles to the currency and the transfer to accounts," explained Sergei Grigoryan, head of the analytical department of the Association of Russian Banks (ARB).

What will the issuance influence?

According to Nabiullina, the issuance will not lead "to any other effects" associated with monetary figures, as the regulator plans to take into account the parameters of the demand for cash. Earlier, the press service of the Central Bank said that the regulator was “not talking about an increase in the money supply" (the total amount of money in the economy, both in cash and non-cash form – RBTH).

However, experts interviewed by RBTH believe that this is impossible.

"To print more money and put them into circulation, while not increasing the money supply, is possible only if to withdraw part of the notes at the same time, such as the old ones. But the Central Bank's report does not talk about this," said Grigoryan.

"This is most likely about the replacement of one trillion bank deposits for cash," said Vasily Solodkov, director of the Banking Institute at the Higher School of Economics in Moscow.

As economist Sergei Alexashenko points out, the "concept of 'printing money' or of 'increasing issuance' in relation to the Bank of Russia has a figurative meaning.”

At the same time, Grigoryan notes that the increase in money supply (M2 is the denotation used by the Central Bank) could be beneficial for the Russian economy.

"The more money, the stronger the economy, while in Russia, the ratio of M2 to GDP is extremely low," he said.

The money supply equals almost half of GDP – 32 trillion rubles ($481 billion) against 70.9 trillion ($1.066 trillion) as of the beginning of the year. For comparison, in China, on the contrary, the money supply is twice the country’s GDP.

"The Central Bank fears increasing the money supply, believing that it will accelerate inflation. However, studies by the ARB (the Association of Russian Banks) have shown that in Russia, inflation is not monetary, it depends on the tariffs of natural monopolies," said Grigoryan.

Easing the strain on Russia’s banks?

The experts interviewed by RBTH also had other explanations. According to Alexander Abramov of the Russian Presidential Academy of National Economy and Public Administration, the reason for the issuance is not a lack of cash, but a liquidity strain for banks.

"Until now, to increase their own liquidity, banks borrowed through repo transactions [transactions with a promise of repurchase or sale after a certain period of time and at a certain price – RBTH]. However, due to high interest rates (11 percent), banks have stopped using this tool," said Abramov.

"To provide banks with enough working capital for deposits and lending, the Central Bank has decided to provide funds essentially for free," he said.

In March, the Central Bank's first deputy chairwoman Ksenia Yudayeva noted that the regulator did not see risks of the acceleration of inflation through the printing press.